I had every intention of writing these blogs and possibly more while on maternity leave. I now have two weeks left off work and have written nothing. I make no apologies because my time spent not writing was mostly spent cuddling my adorable Ruby. Becoming a parent with Jared is a whole different type of trip and the experience is definitely postworthy, so much so that it deserves a (or multiple) post(s) dedicated solely to that topic. For now, I would like to recount and record our two most recent vacations to New York City and Charleston.

First, New York City. Despite my strong dislike for cold weather, visiting this iconic city during Christmas has been a part of my bucket list for awhile. Jared wanted to go to Patagonia for our 2016 vacay but I was newly pregnant and Zika was still a strong enough threat that I decided it was not worth the risk. So, NYC it was! We stayed in an Airbnb, per our typical preferences, in the East Harlem neighborhood. The apartment was within walking distance of central park and the Metropolitan Museum of Art. There was also a bomb breakfast place right around the corner although we did cook several breakfast meals to save some cash. To add even more NYC charm, the walk between the nearest subway station and the apartment building had a vendor selling Christmas trees. It was cinematic.

We did several of the typical touristy things: went to the top of the empire state building, got cheap tickets for a Broadway play, and of course, saw the tree at Rockefeller Center. We didn't go ice skating because the line was tremendous and, we actually don't care that much for it as an entertainment option. I have an intense fear that I will fall and someone will skate over my fingers and chop them off. 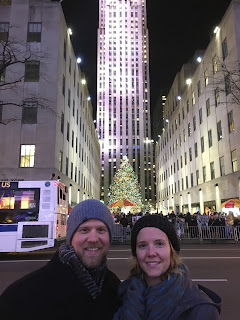 It was definitely a big tree 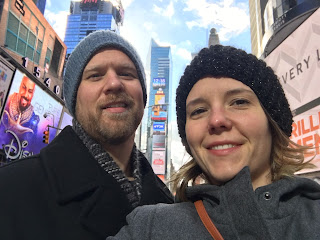 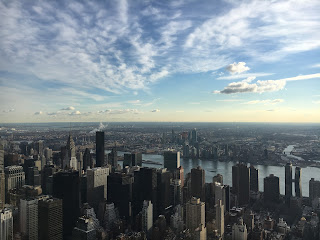 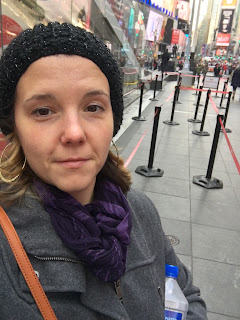 There was no one in the cheap ticket line for "straight" plays- everyone wants a musical! 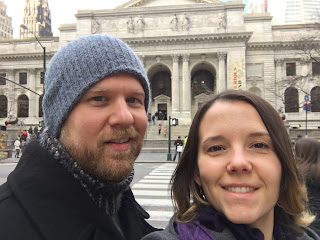 In front of Central Library (where Carrie and Big (almost) got married!)

CHARLESTON
We went to Charleston in March of 2017. It was an early anniversary/baby moon trip. Since our anniversary was a week before Ruby's due date, I would not have been able to fly so we went earlier to still be able to take advantage of our free flights with Jared's American Airlines job. Several people had recommended a visit to Charleston prior to our decision to make that our next domestic getaway. We had only heard good things about the locale and it did not disappoint! We actually booked hotels for this trip (I wanted to be able to walk comfortably in my 7 month pregnant state to the downtown attractions) and stayed 2 nights outside of Charleston when we visited the beach and an old plantation and then 3 nights in downtown Charleston.

First we visited Sullivan's Island beach. The beach set up was definitely what I had pictured as an East Coast beach. There was a small section of bramble (I don't know what the vegetation was actually called) between the road/houses and the sandy beach area. There were no shops, concessions or restrooms (!) on the beach and we had to walk back into the little town area to use the facilities after about an hour of sitting in the sand. We ate at a delicious little restaurant before heading back to our hotel. The next day we visited the Middleton plantation. It was a very interesting and educational experience. We were there around Easter and there was an egg hunt the day we were there. We watched parents wrangle children in the heat while trying to keep their Easter finery in a photogenic state and contemplated our future as we ate at the plantation restaurant. 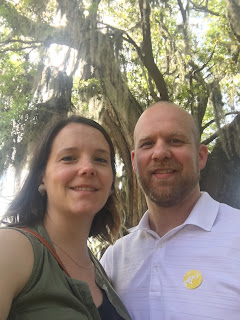 Spanish Moss is protected in the South 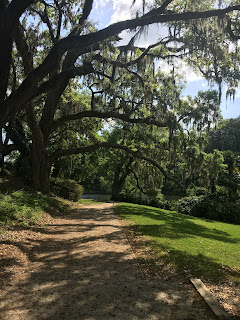 We spent our time in Charleston proper by walking and perusing the shops of downtown, taking a historical tour and eating, of course. The city is so old and has so many of the buildings from its early days well preserved. It is an incredibly charming place. 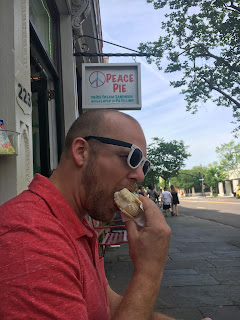 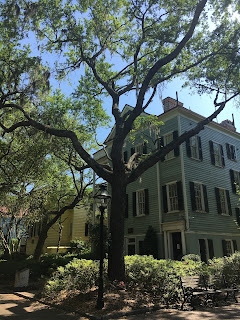 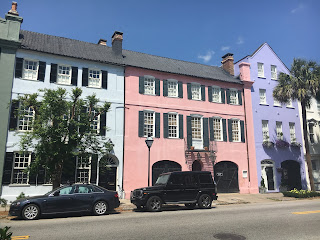 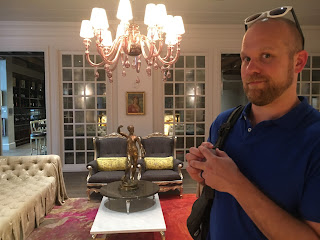 We still have plenty of ground to cover on our domestic agenda. But these two memorable spots were great places to knock off the list!