I really must work on my titles. I feel like Hugh Grant in Love Actually when he is prime minister and tells his publicist "I really must work on my wave" after he double hand flutters at a crowd as he walks into the residence. For some reason, the one liners escape me. To carry on I would like to build on the last post which likened becoming a parent to learning a new language, everything new is often more exciting when you get to experience it with someone else. It also makes the hard bits easier because, if nothing else, you have someone to share the blame if your kid grows up to be a real A-hole. Just like those moments of doubt one has when conjugating the tricky verbs, there are plenty of moments of doubt when trying to keep an infant alive and at the same time help them thrive. Most of my moments of doubt and anxiety currently revolve around the sleep schedule. Should we wake her up to eat? If she sleeps now will she sleep later? Please, oh please, whatever the decision do not let it lead to confusion of days and nights. This is my worst nightmare. And, unlike learning a new language, Google is the opposite of help in these doubting moments. Why is our trusted source for all knowledge so powerless when it comes to baby issues? Google is useless because, there are a million different opinions and approaches which all purport to lead to ideal results. The reason why you can find someone who swears by a certain method is and someone else who swears against it is because no matter what the approach the results vary from parent to parent and from baby to baby. You just have to learn your kid. And once you've learned your kid, no one else will be able to care for them appropriately. No one will conjugate your baby the way you do.

My husband often defers to my "mom instinct" during extreme moments of indecision. I love that he thinks that I have a mom instinct. In fact, his confidence in my mom instinct has started to grow my confidence, which was pretty non-existent,  in my parenting skills. The problem is, I have a hard time separating my instinct from what I think I "should do." I am so worried about making the wrong decision that I am often paralyzed and my mom instincts get lost in the desire to do the right thing. I lose myself in translation mostly because of all of the other voices out there shouting their own truths. If nothing else, in Parenthood the myriad of ways to approach a situation are all perfectly fine and have the same percentage chance of messing up your kid. Maybe as parents develop, we start to find our own dialects of this new language. For instance, a southern drawl might have baby in her own crib in her own room on day one home from the hospital. But the pacific coaster will co-sleep until the kid is ready to move to college. Perhaps, I have stretched the learning language analogy too thin. The point in the above example is that everyone is still speaking the same language (English, of course (not suggesting English is a better language than any other language)). We're all still parents and we all make our decisions out of the desire to do what is best for our child and to make sure they aren't serial killers when they grow up.

Next week, I will have to leave my daughter at daycare for the longest stretch of time yet (we had a test day last week when she stayed for about 5 hours). This will be a bit of a challenge for me. I am wrestling with guilt about not being at home when I'm at work and at the same time guilt about not contributing to the household income when I'm at home. Yay for being a mom!
Posted by Christy at 9:46 AM No comments:

December 13, 2019: I wrote the following shortly after giving birth to my eldest little gem. Looking back, I can definitely relate to my new-mother self. After the birth of my second, there is a whole new set of struggles and "road blocks" (to keep with the city planning metaphor) but there is also less anxiety about issues I used to worry about. It gets easier and it gets harder but it is still unique and beautiful.

I imagine parenthood to be like an actual neighborhood. This 'hood has several different manifestations in different cities, suburbs, towns and villages. It evolves through time. The rules change as the HOA develops new policies to protect the safety and sanity of its citizens. The HOA? The AAP (American Association of Pediatrics), individual pediatricians, scientists and Jenny McCarthy. The citizens? Parents and offspring. The liaison between the two? Google. Although you don't have to significantly alter your latitude and longitude to visit the 'hood of parent, you do still physically go there. However, more significant than the physical journey, perhaps, is the inner journey of the self, psyche and soul.

The physical transition is the one most often related in social media, in real society and in family advice circles. "Oh, you'll never sleep again!" wails Aunt Martha, "I hope you don't like sleep!" laments cousin Sue. Yeah, you get less sleep. You also get less sleep when you stay up all night drinking sangria and watching Sex and the City reruns. The latter you have a little more control over, that is true, but being a DINK (Dual Income No Kids) couple and being a parent couple are both lifestyle choices. You trade in a little physical independence for some physical interdependence (I know there is more to deciding whether or not to have children than the physical demands. I am in no way trying to simplify a decision like that to something so basic.). The physical demands for a mom are especially intense, even more so if she is breastfeeding. Growing a human is no joke. I mean, it is actually kind of comical. Humans grow inside of women. Our bodies make bones, hearts, blood vessels. OK, maybe when I said comical I meant amazing. During a recent conversation with a friend whose baby turned one a few months ago, I asked when/if she was planning to try for a second child. She responded by saying something along the lines of "I'd like to have some time when my body isn't doing anything for a baby." I hadn't really thought of that but after carrying around a tiny human for basically 10 months and then breast feeding for about a year her body had been helping grow another body for almost 2 years. Seriously. That is intense. The physical stuff is intense. And although partners (if you're in a committed relationship) often try to ease the physical burden placed upon the mother, it is one trail in parenthood that the mother has to largely travel alone.

Not to get too analytic or "hippie dippie" but the inner journey or changes that occur along the path to parenthood are also irreversibly significant. I was very worried about losing my "self" when I had a child. During my pregnancy, I frequently fretted about this idea of "loss of self" that I would read in other mother's testimonials. Their lives became all about their children and they correlated this with a loss of self. I was terrified of that. I now realize that I was actually bemoaning the loss of my lifestyle, not my self. Before Ruby, I had a hard time separating the two, I think. I didn't want to lose spontaneous nights out or staying up late in deep conversation with my friends. I still don't want to lose those things but I have a different perspective now. My lifestyle might change some but I still 'have a life.' The part I was not expecting is this type of opening. Opening is the best word I can think of to describe it because it really is a whole new realm of emotions that were previously closed off to me. Emotionally, becoming a parent is like learning a new language. When you learn vocabulary in a different language which is embedded in a different culture, you learn words and expressions that are unique to that language and cultural combination. You learn a new way of thinking and describing something for which you had, perhaps, previously prescribed a word and thought you fully understood. You realize your word or words were insufficient. You didn't really understand until this new language showed you a different perspective. That is what it feels like to be a parent. I've learned a new language. I have experienced sensations and emotions that had never before been revealed to me. This is something new. This is a path I have never travelled. And it has only been 11 weeks. I am what they would call an early learner of the language. Donde esta el bano? Donde esta, indeed.
Posted by Christy at 9:43 AM No comments:

We didn't spend almost 11 months of 2015 living in poverty or lacking all modern comforts. We lived on a budget, yes, but we also didn't sacrifice safety, cleanliness or deny ourselves seeing a site or taking a tour that we wanted to see, but we weren't at home. The fortune of the United States is well known and does not need repeating but the excesses of our country are put in sharp contrast when one spends the majority of a year without those comforts. To emphasize the differences between our home culture and others, we went to two of the most excessively American places possible, Disneyworld and Universal Studios. ﻿ 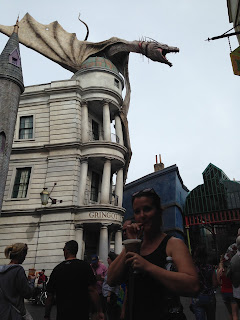 Drinking some butter beer (butterscotch milkshake) in front of Gringott's 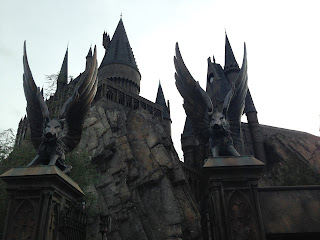 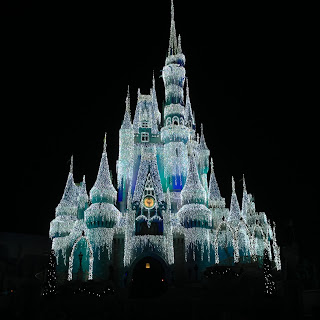 ﻿I should clarify that we did not visit these places with the intention of over-indulging in excess. We went because these places are magical. Hogwart's? Yes, please. We were able to see several of the sites in the UK which inspired JK Rowling so to see her imagination made real was truly something else. As I am only now publishing this post, four years later, much has been added to the theme park of Wizadry and I am excited to visit it again when the kiddos are of an age that they can appreciate the extreme excess and the extreme price tag!

Posted by Christy at 9:28 AM No comments: