My goal when we left was to write every night. Just a little bit. Every night. Well, that sure hasn’t happened. I am way behind. But, this particular destination has been one of my favorites and I am looking forward to documenting our time there, even if it has been over a week since we were there.


Khao Sok is a national park in Thailand, located in the mainland of southern Thailand. Jared had to show me a map because, in my complete and extensively absent knowledge of geography, I had no idea that Thailand looked like this:

Khao Sok is part of that green bit in the middle. We took a bus from Phuket town to the entrance of the park. Our hotel was about 800m (half a mile) from the entrance and was part of a cluster of hotels which advertised tree houses and bungalows as the primary lodging. These were nowhere near as rustic as they sound and were in fact quite nice with private bathrooms and mosquito nets. Psh. Who needs that stuff? Rainforest national park, you say? With a beautiful lake in the middle? Let’s go on a two day hike and stay in a floating hut! We were both beached out and having trees and mountains as scenery instead of college kids and drink stands was refreshing. The night before the trek, we went to the hot springs near the park. The springs themselves were not real fancy and did not compare to those in our beloved Arkansas, but they were still plenty relaxing and it was fun to go to a place that was, by all appearances, exclusively used by the local Thais. Our twenty minute ride there, was in the back of a pickup truck. On the way back to the hotel, when the stars were out, looking up at the sky we could have easily been back in Oklahoma. No matter where you are the view looking up at the night sky from the back of a pickup truck is the same. The only difference is whether, when you look to the side you see a cow or an elephant (yes, that happened…twice).


In the morning, we set off for our two day jungle adventure. After arriving at the pier and paying the national park fees, we boarded a longtail boat with ten other tourists and headed toward our bungalows. Here are some views from the boat ride there: 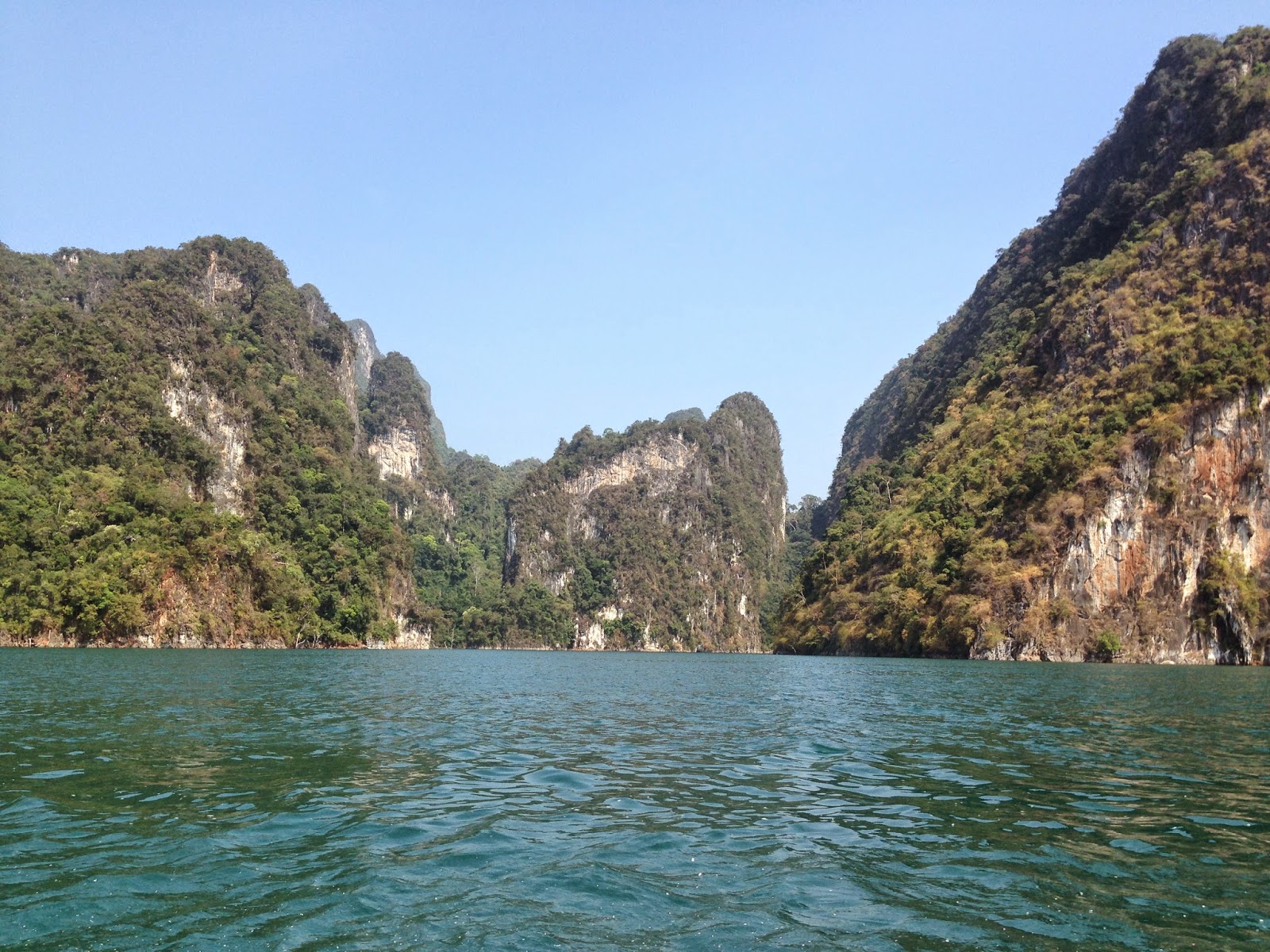 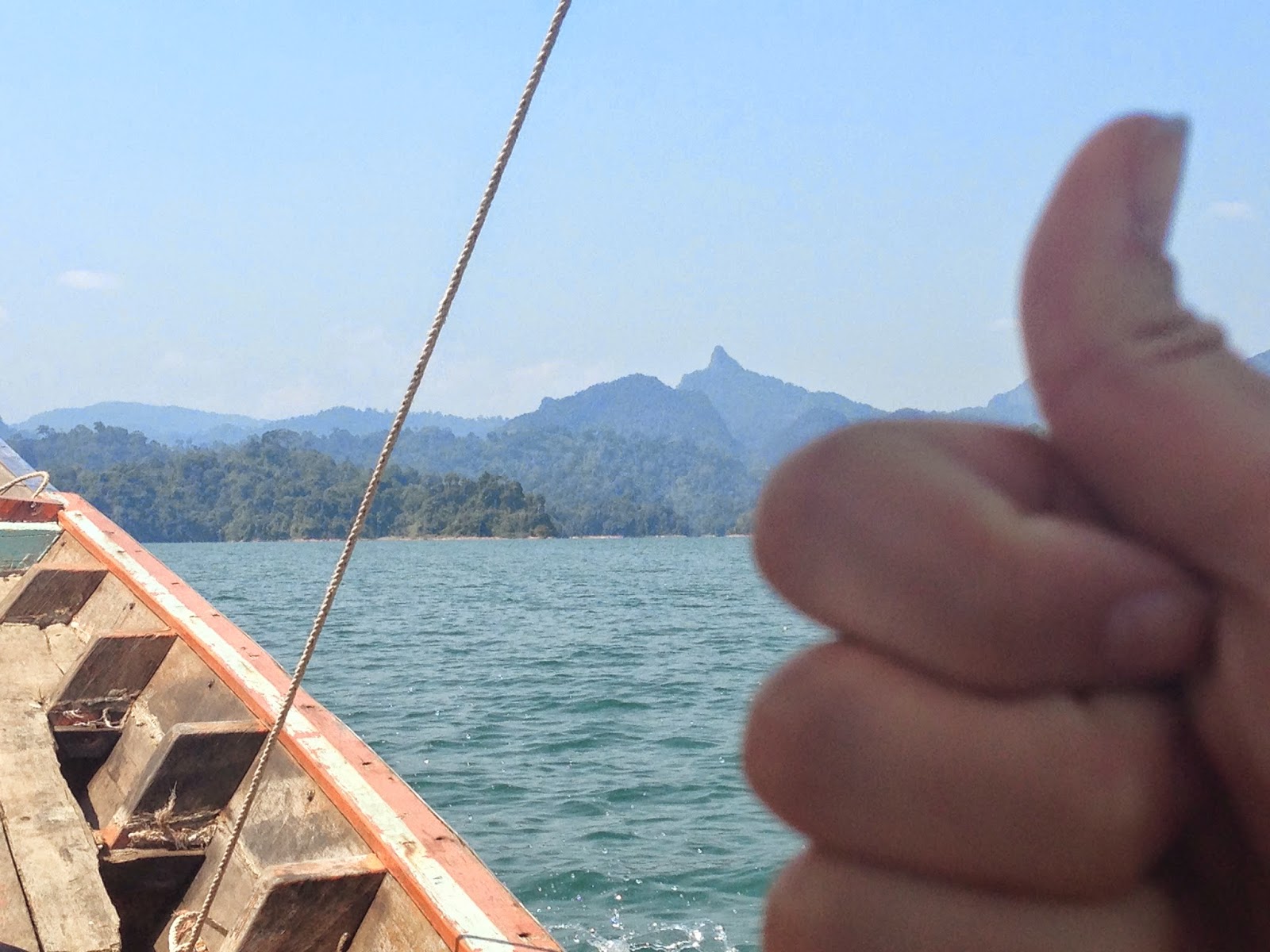 I thought that the range looked like it was giving a thumb's up! 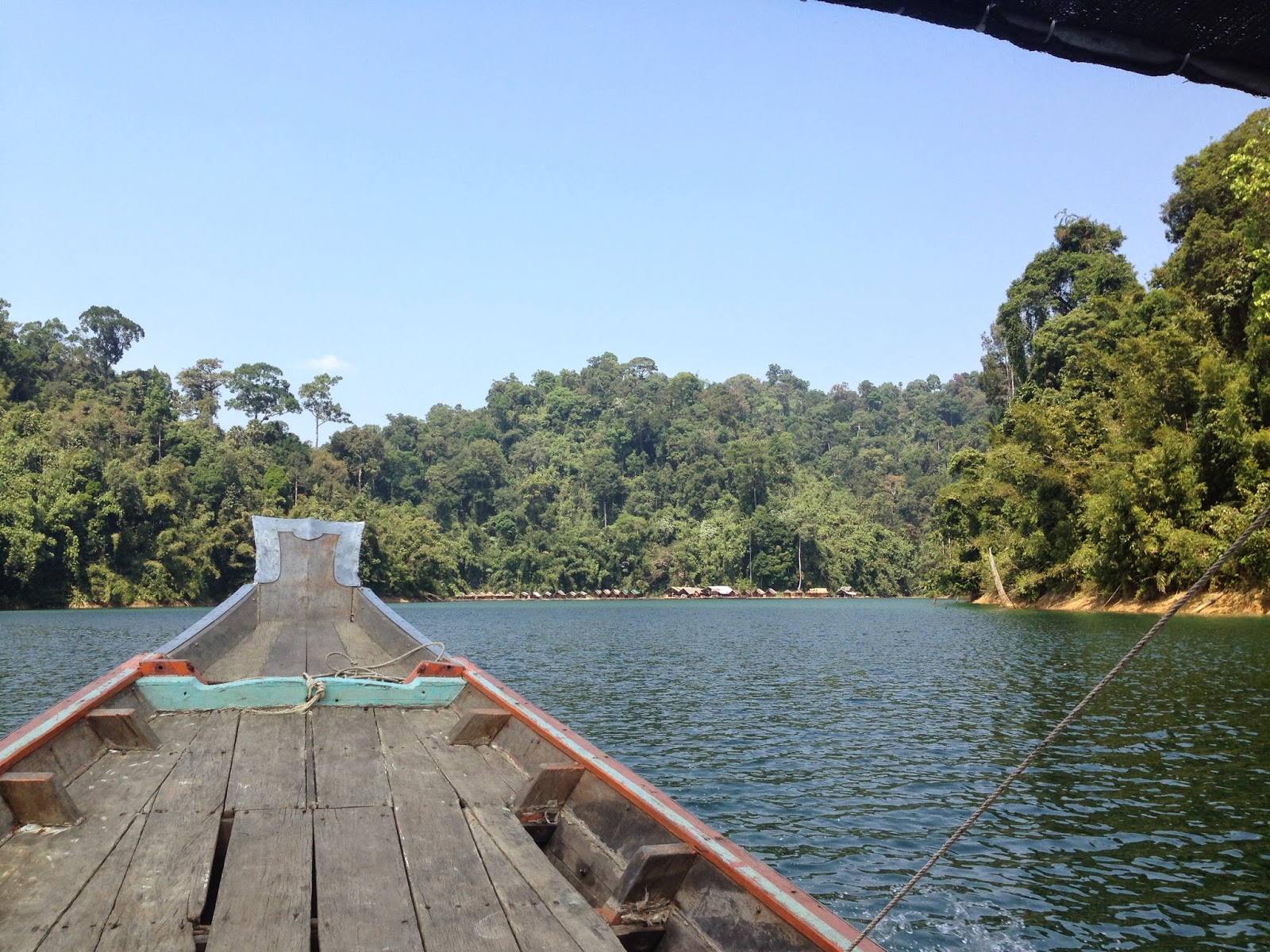 Cheow Larn Lake is a man-made lake formed about 30 years ago after the Klong Saeng river was dammed. It was a clear, blue lake and a perfect temperature for swimming. The freshwater was also refreshing after being in saltwater for the past two weeks. The bungalows we stayed in were part of a larger dock which actually sold refreshments and was where we all gathered for our meals. There were bathrooms up the hill (even a western toilet!) and huge logs which had been buoyed to form a swimming area. 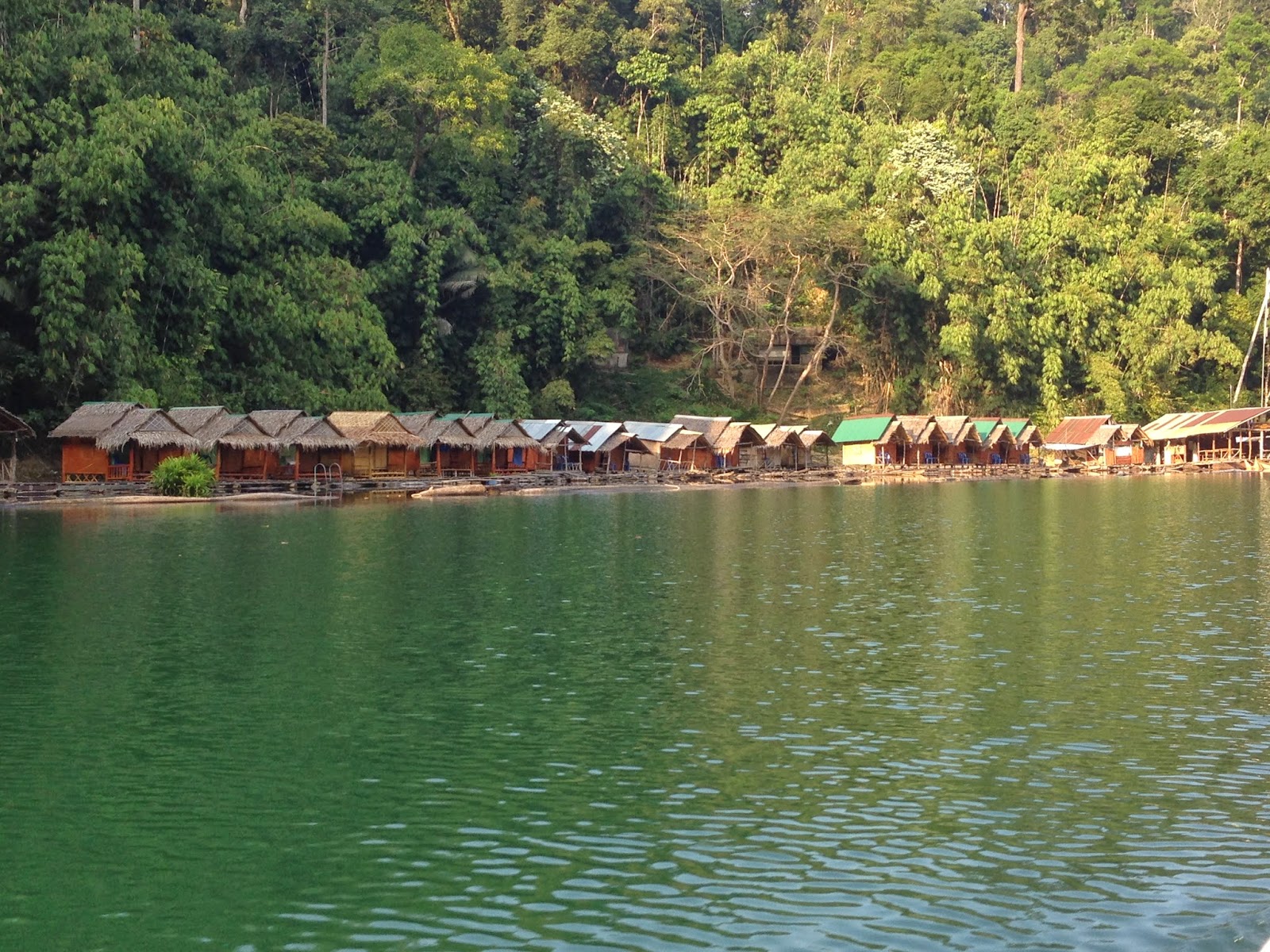 Our guide (who acted and looked like a Thai version of Johnny Depp in Pirates of the Caribbean (this opinion was shared by other members of our trekking party as well)) informed us that after lunch we would go on our first hike through a cave and that we needed to bring our head lamps and wear clothes that could get wet. Not clothes that were water resistant, but clothes that could get wet.  The reason for the dress code was not the possibility of rain or splashing from passing waterfalls, but rather because we would be encountering chest-high water. Chest-high? Oh, ok, cool. No big deal. The rainforest portion of the hike was beautiful and we saw some giant bamboo stalks and other lush greenery. At least I’m pretty sure that’s what we saw. I was pretty focused on the chest-high water in my clothes portion. 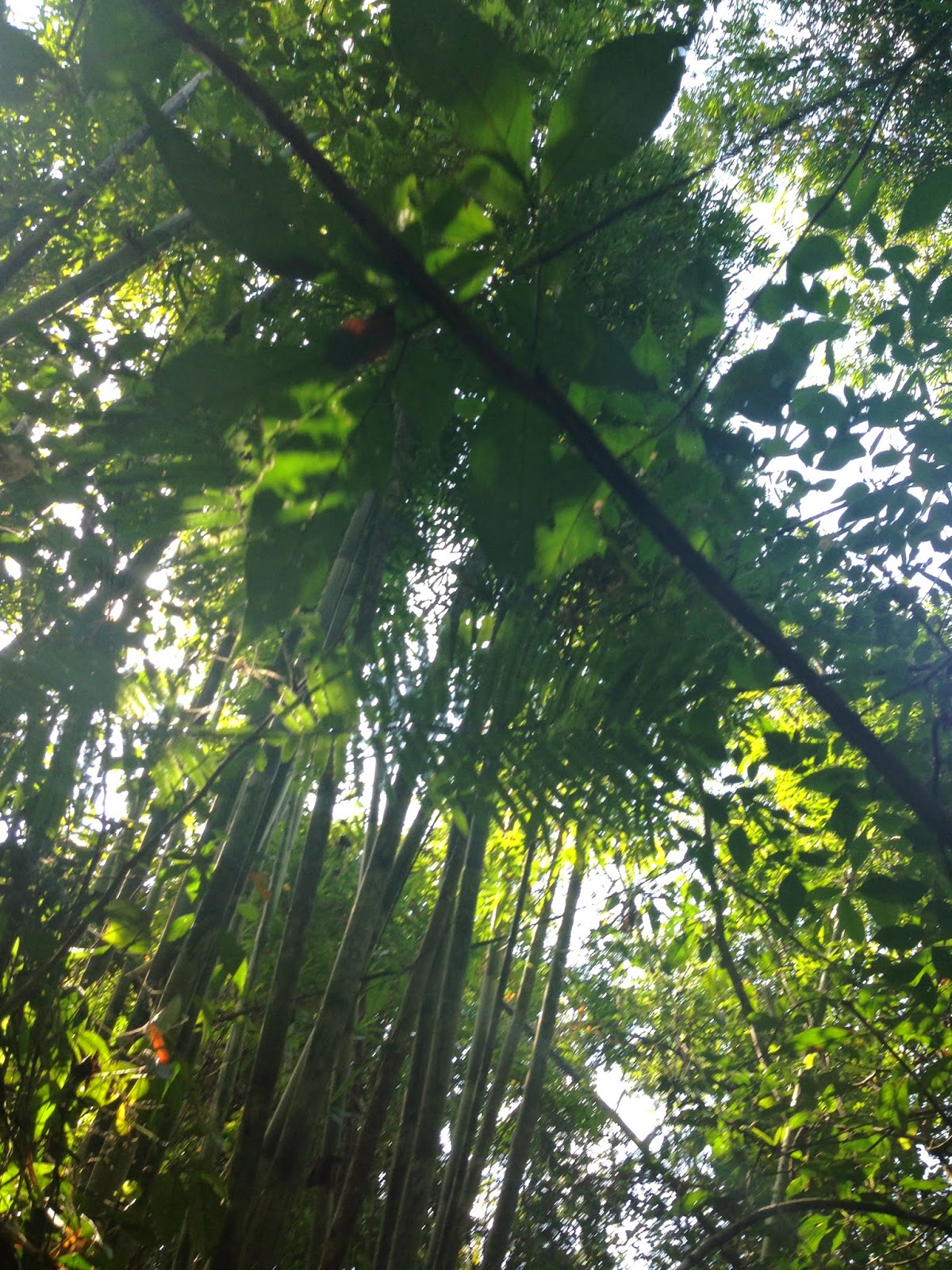 
The cave was actually a pretty awesome experience. We saw some creepy big spiders, bats and baby limestone mounds just waiting to turn into stalagmites. The water bits weren’t too bad and if it got tricky there was a rope to hold onto to help ease on down the cascading waterfall. Of course, through the whole thing, we had Captain Jack to help us along. 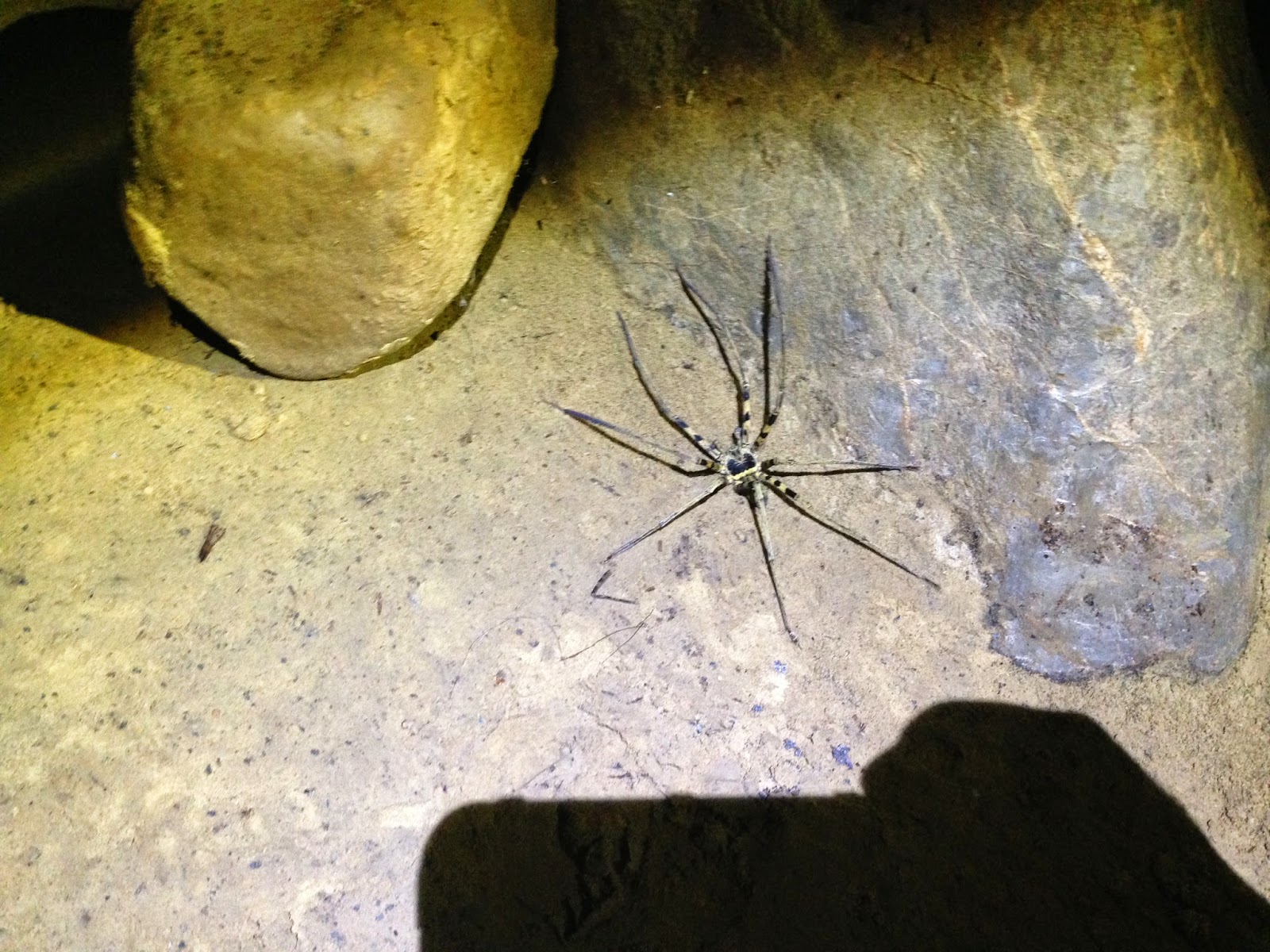 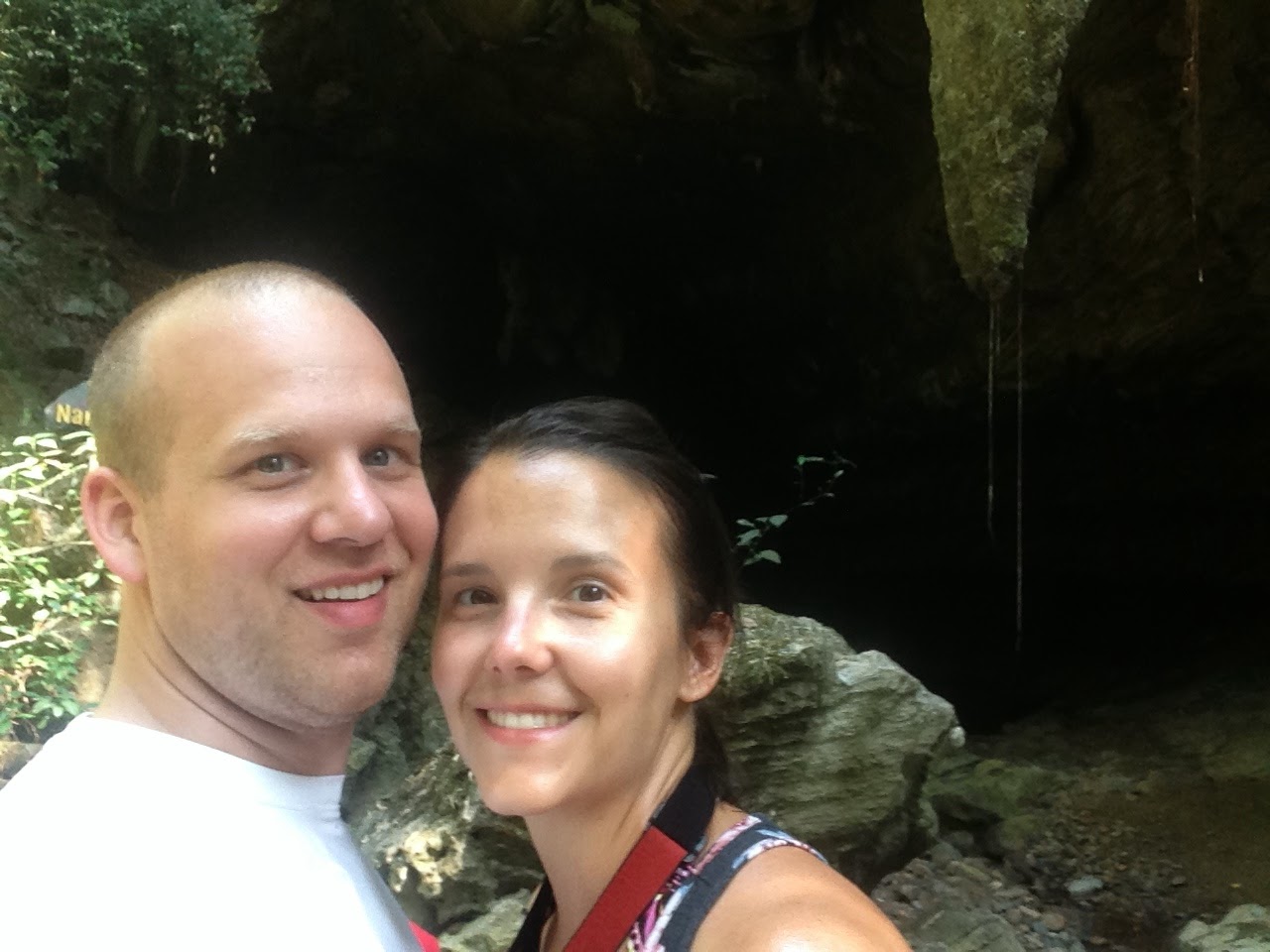 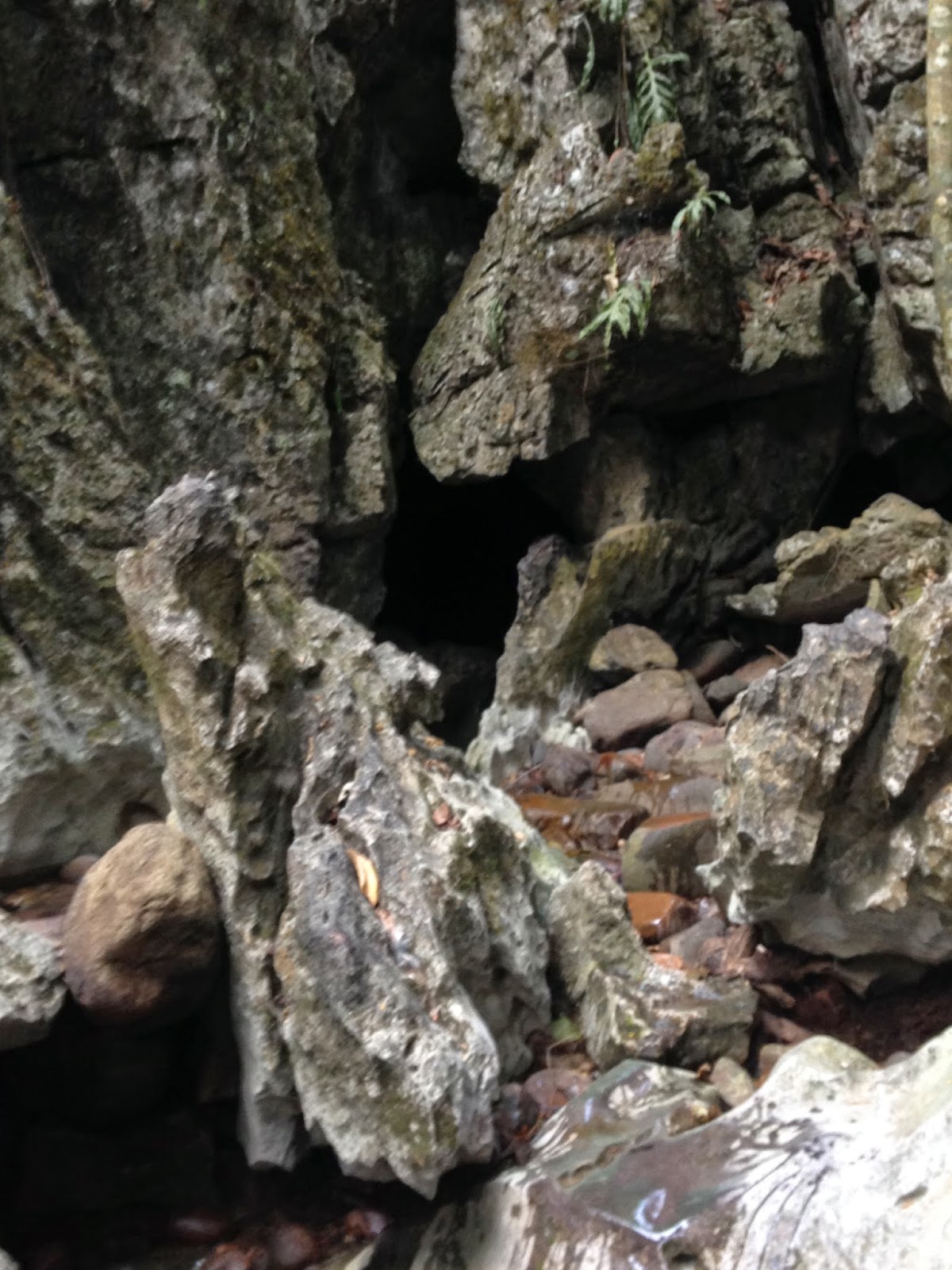 We finished by crawling through that


The experience was unlike one either of us had had before and I doubt one we will soon have again. We both commented on the differences between this cave experience and the much more sterile one we had in the Batu Caves of Kuala Lumpur. Where in the Batu Caves, shining a light at the bats was strictly forbidden (bad for the bats’ eyes, etc.), Johnny flashed the bats with his light and did not advise against touching the limestone (apparently skin oil is bad for baby stalagmites). While this made for a unique and interesting tour, it may not be the most conservation-minded approach. But, I am not a cave-ologist so, who knows?


When we returned, we swam some more, had dinner, went on a night boat ride in search of wildlife and then sat up (until the electricity got turned off) and chatted with some guys from the UK and a couple from Switzerland. During this conversation, I became thankful for Jared’s knowledge of “football”, geography, and world politics. If it weren’t for him, we would have ended up spending more time than is warranted talking about Love Actually and Harry Potter.


The next day, we woke, ate breakfast, swam and took the boat to another hiking destination. We spent more time going uphill and did not have to swim mid-hike. It was a lovely hike but it did get quite hot. So hot, in fact, that Jared felt the need to take off his shirt. 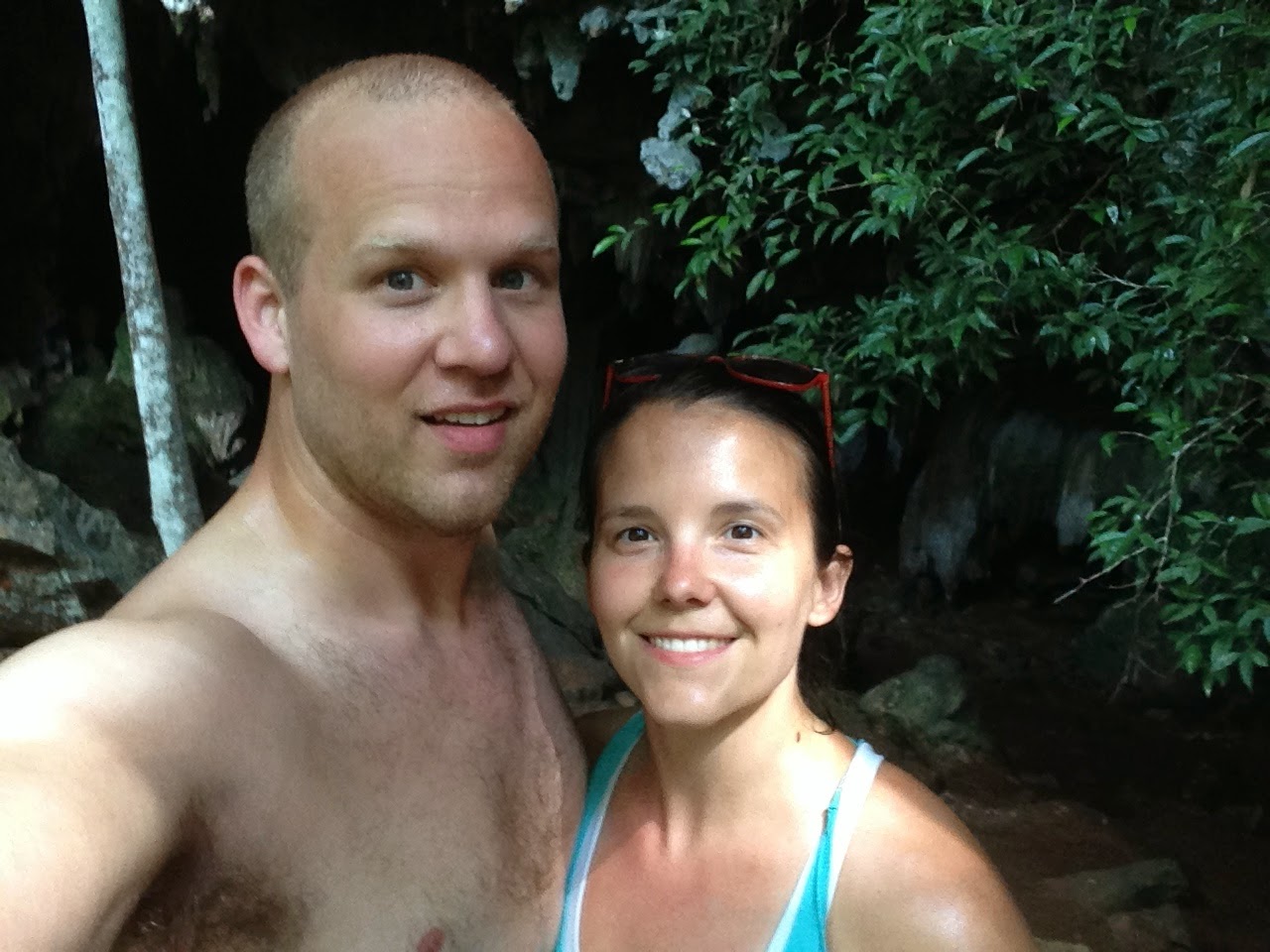 It's gettin' hot in hurr


I teased him that I was going to start a Naked Hiking reality show. He assured me that he would not get completely naked during the hike. As if I was worried. After our semi-naked hike, we had lunch and then it was back to the pier and then the hotel. While we were gone, we switched rooms (to the original room we had booked) and this was our bathroom: 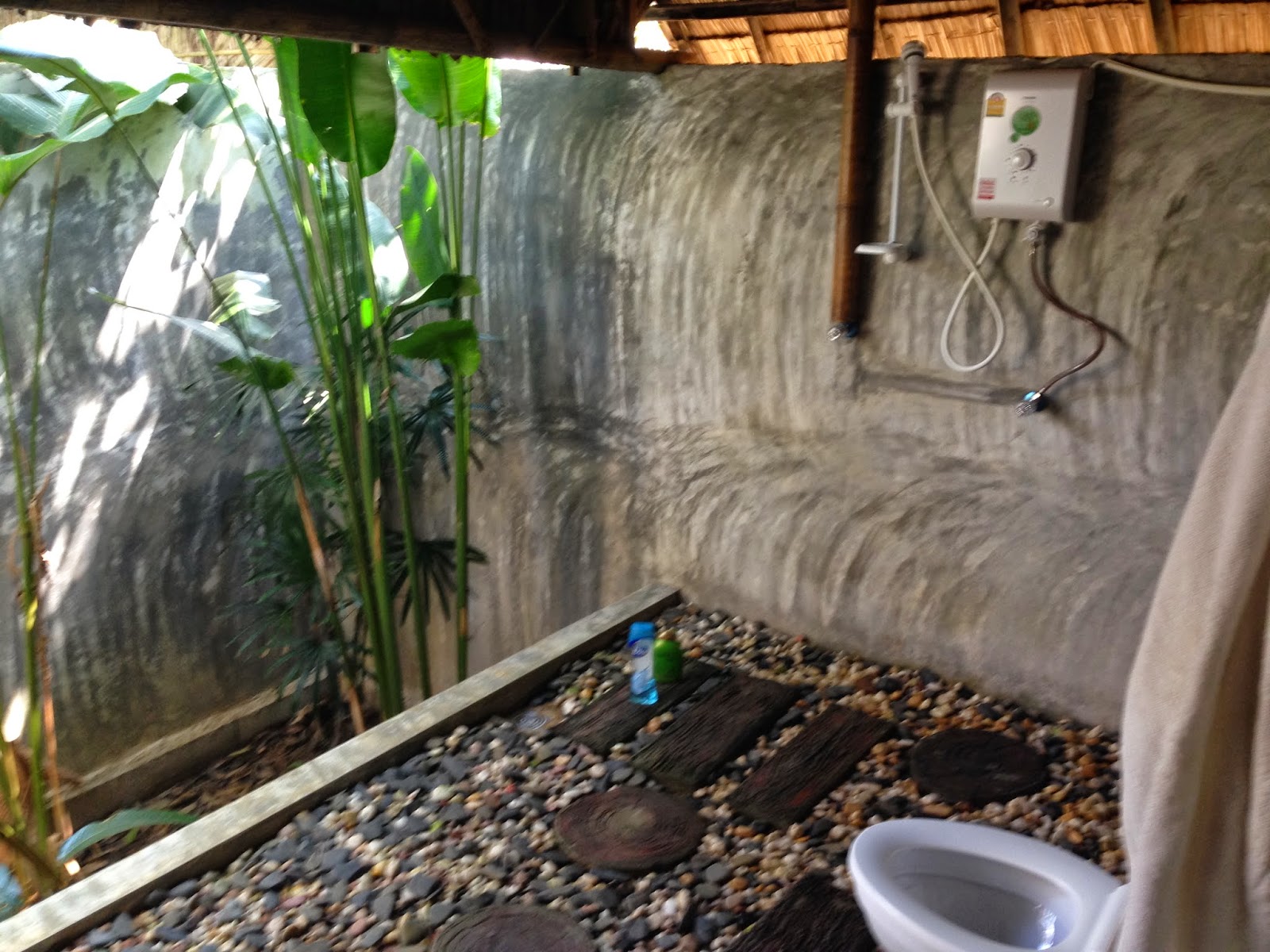 A seat with a view 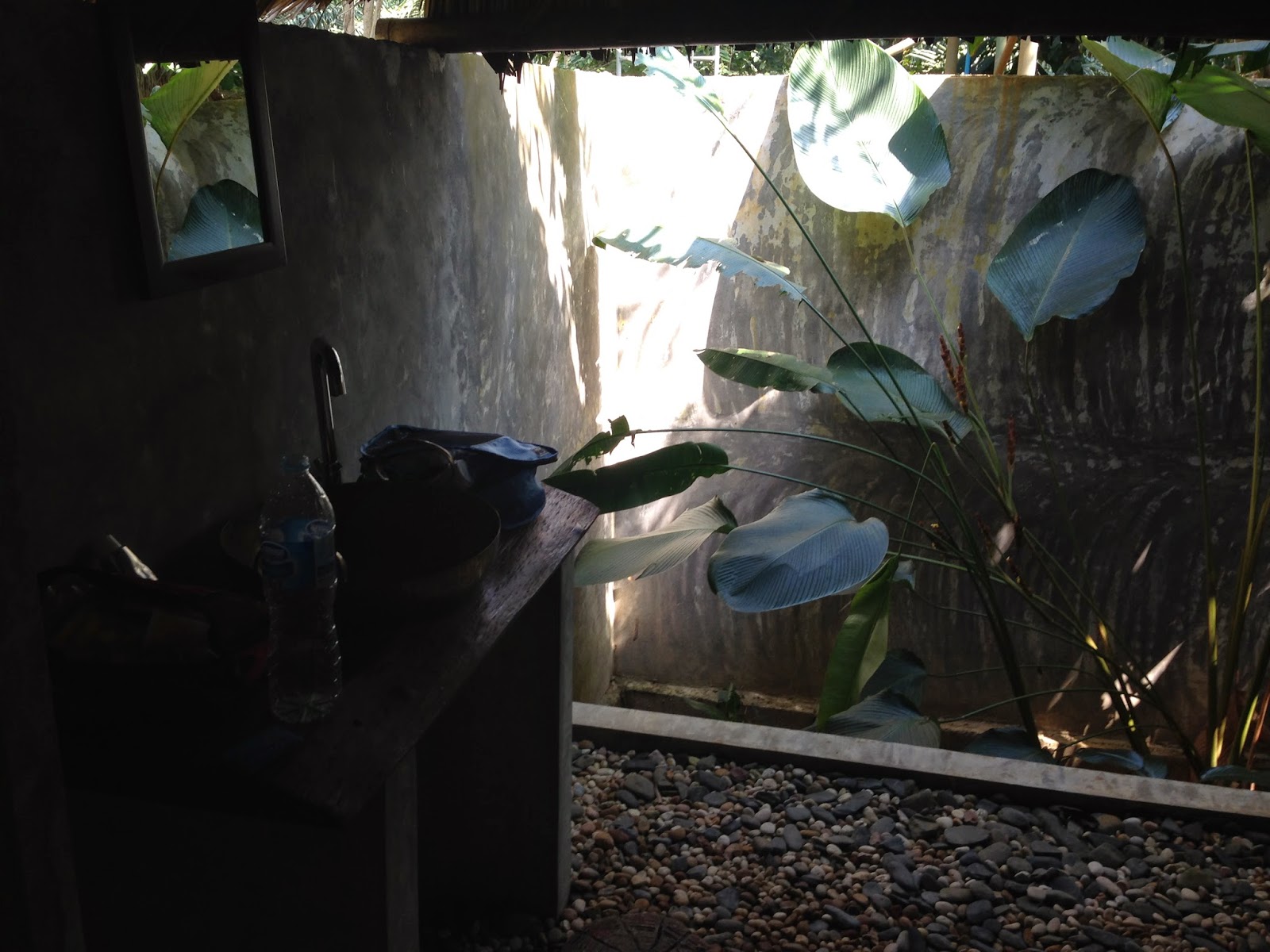 Washin in the great outdoors

We spent the evening at the hotel playing dice and then hit the hay early. The next day we left our little jungle paradise and headed towards the big city. Bangkok is next.
Posted by Christy at 7:26 AM