The theme song for Bangkok was set to "Walkin' in Memphis" but of course Memphis was substituted with Bangkok. "I'm walkin' in Bangkok with my feet 10 feet off of SiLom..." it really was playing in the background of my thoughts pretty much constantly. Oh, and of course we took the Midnight Train to Georgia (Bangkok) from Surat Thani and arrived early in the morning. Bangkok was a very melodious stop. I'm not going to document Bangkok day by day since, we lost a day due to being sick (my turn) and had other tedious, uninteresting things (getting a visa for Vietnam, laundry, groceries, cooking) to do. It makes more sense to discuss and provide pictures of the places and events rather than provide a daily chronicle of our time.

In Bangkok we visited the following Wats (temples): 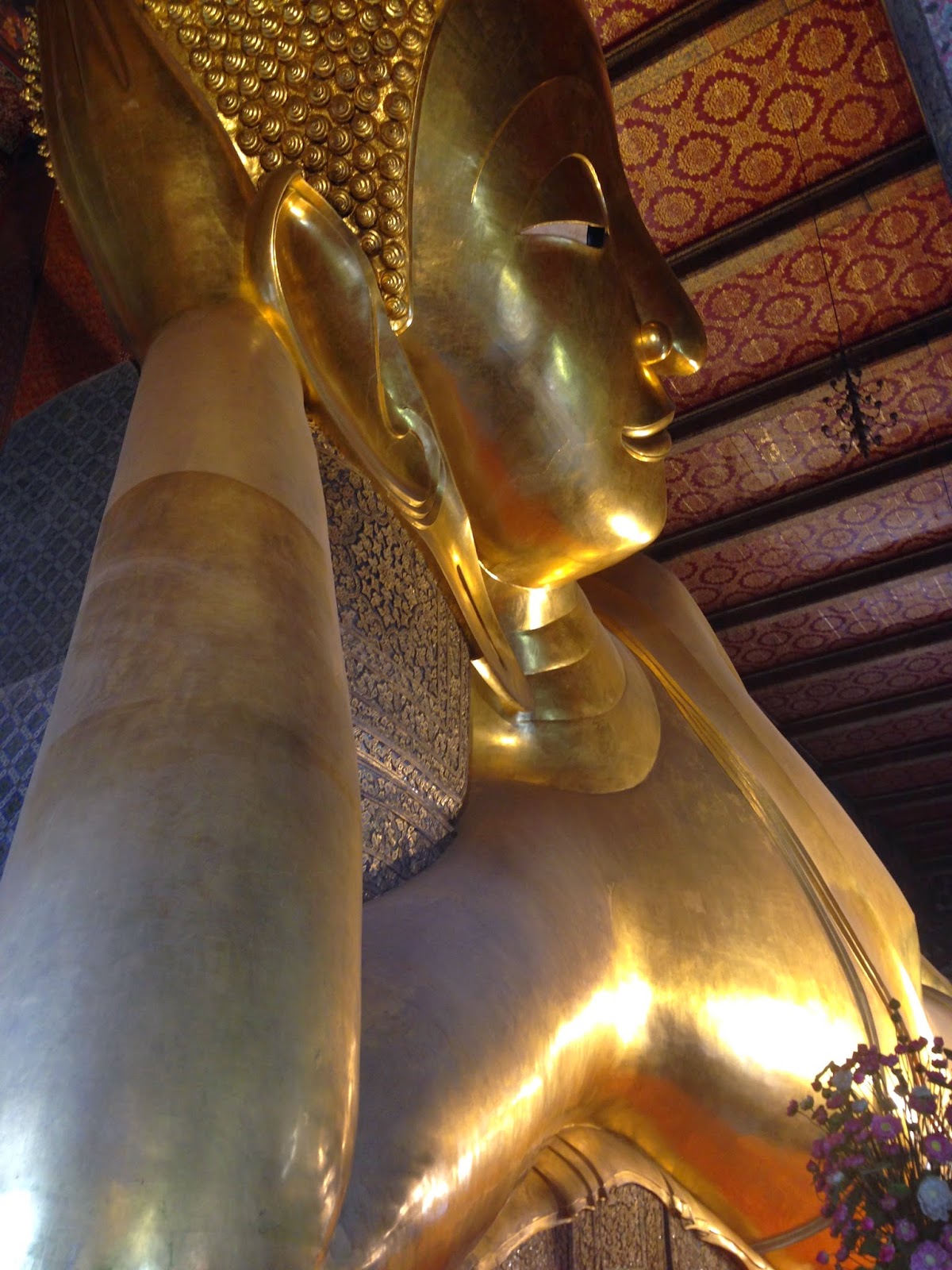 The size of the reclining Buddha is impressive 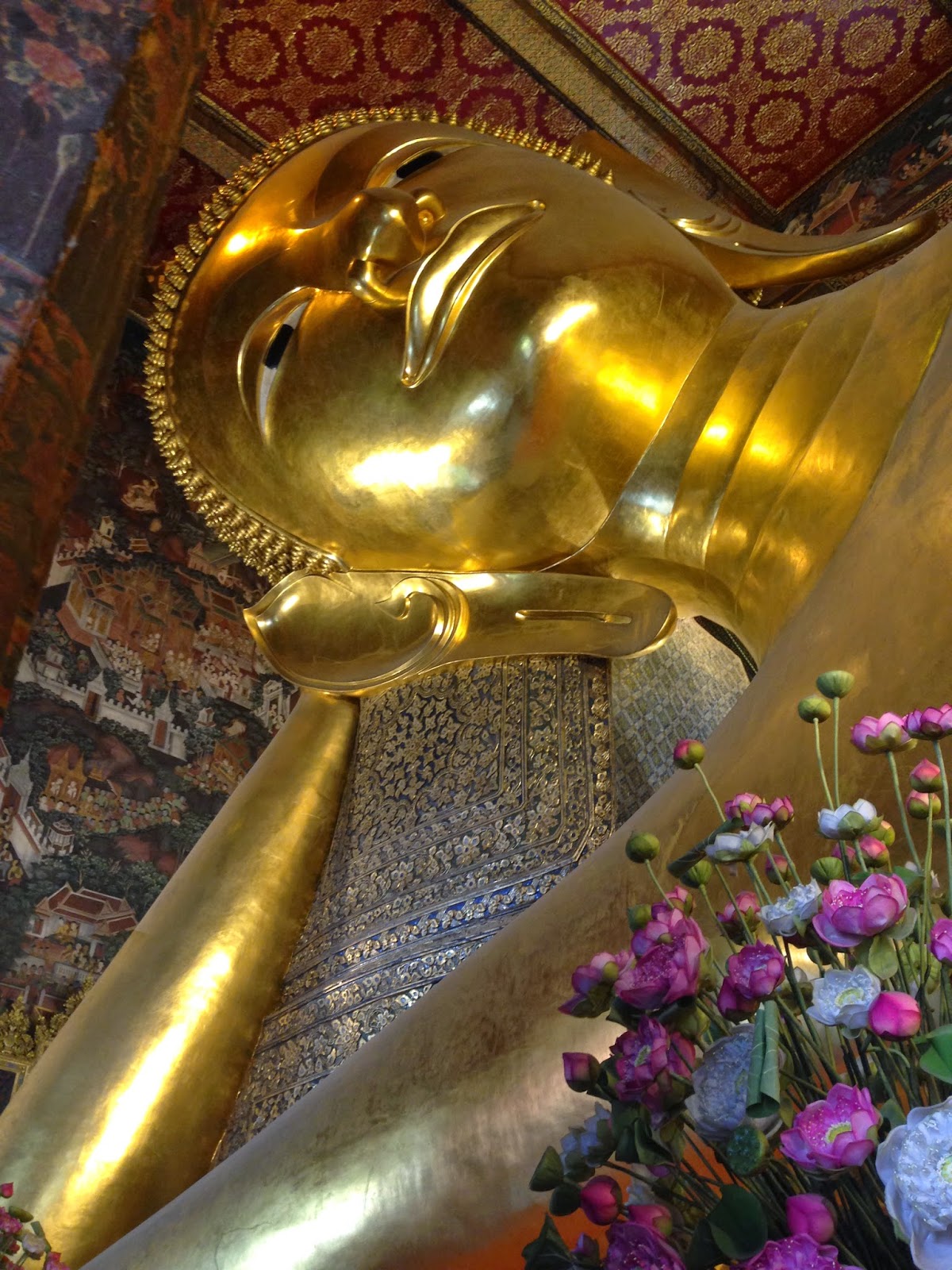 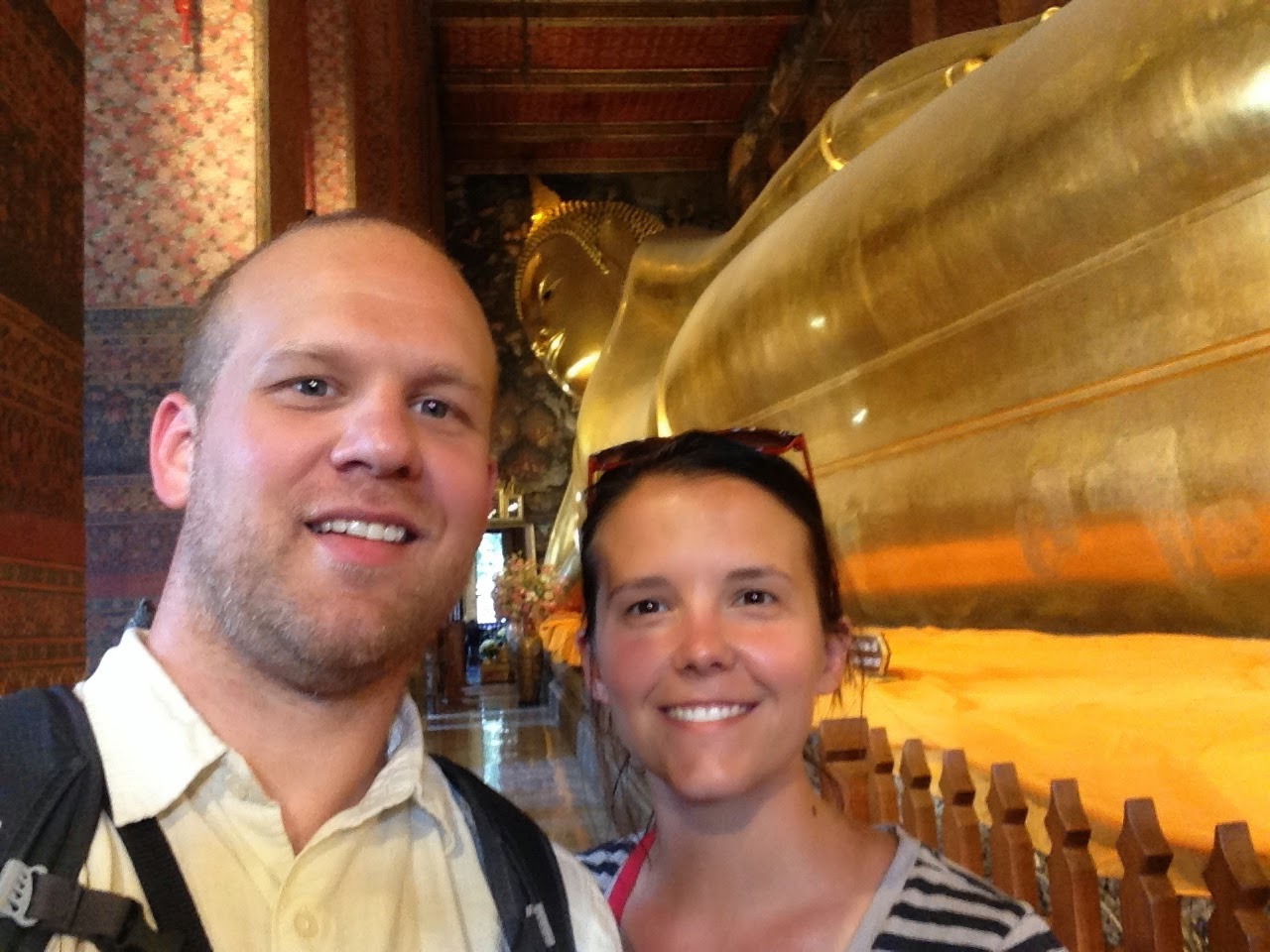 Along the corridor there are 108 bowls meant to represent the 108 characters of Buddha. Visitors drop a coin in each bowl for good luck. 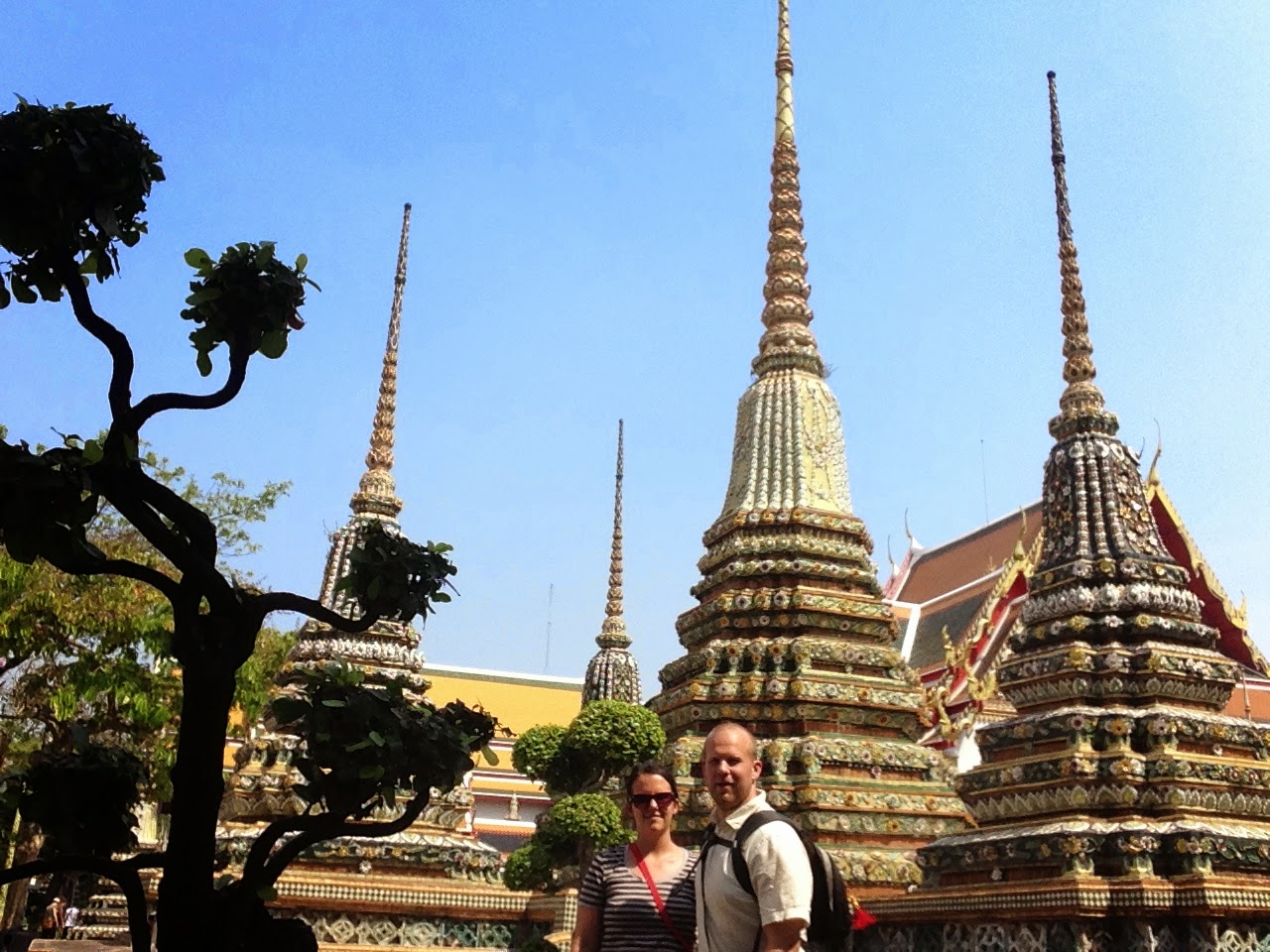 The site of the reclining Buddha is also believed to be the first University in Thailand and where Thai massage originated. 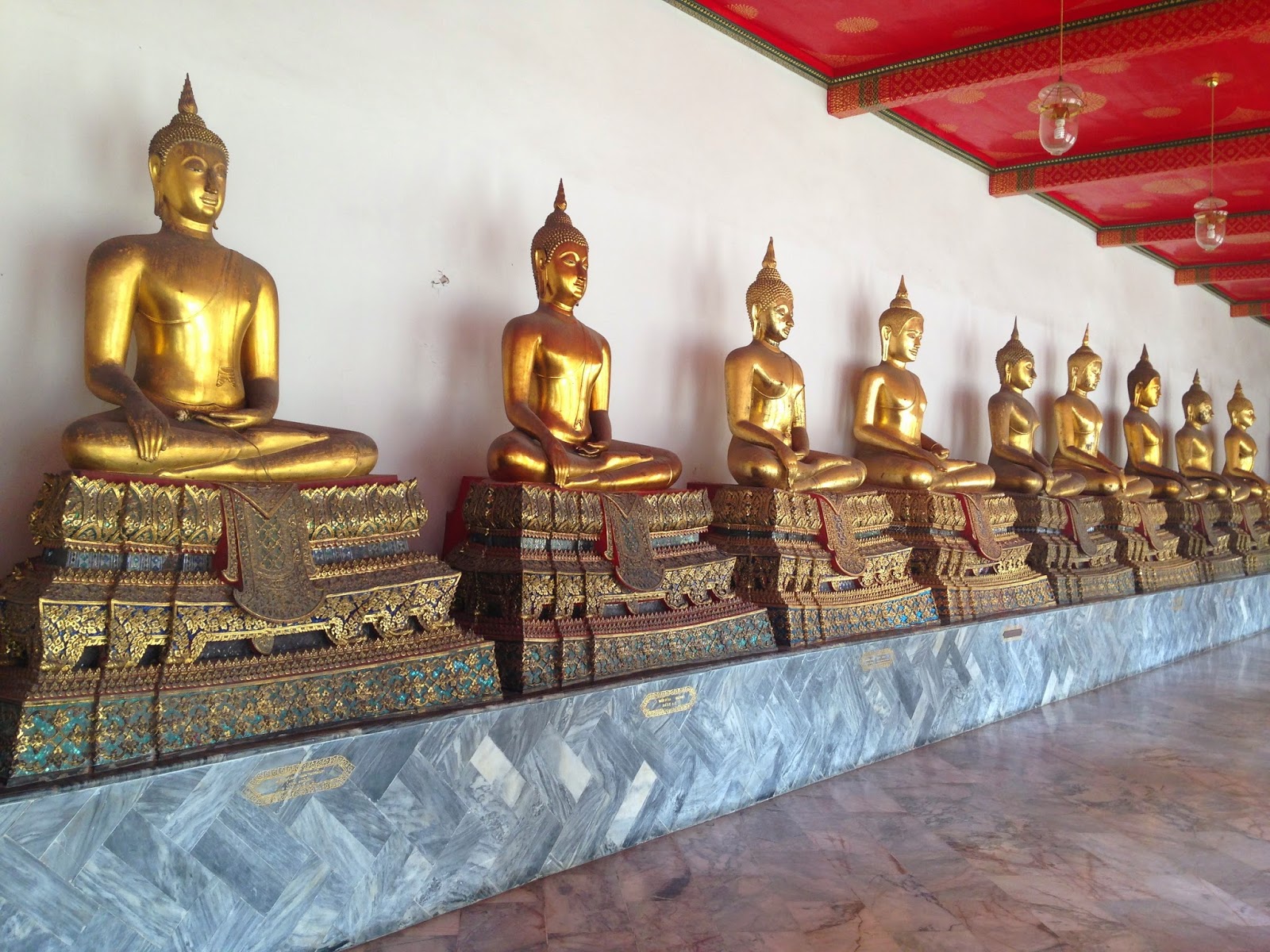 These Buddha statues line the hallways and are representative of a display we saw reoccur in several other temples and monasteries.
Wat Arun: 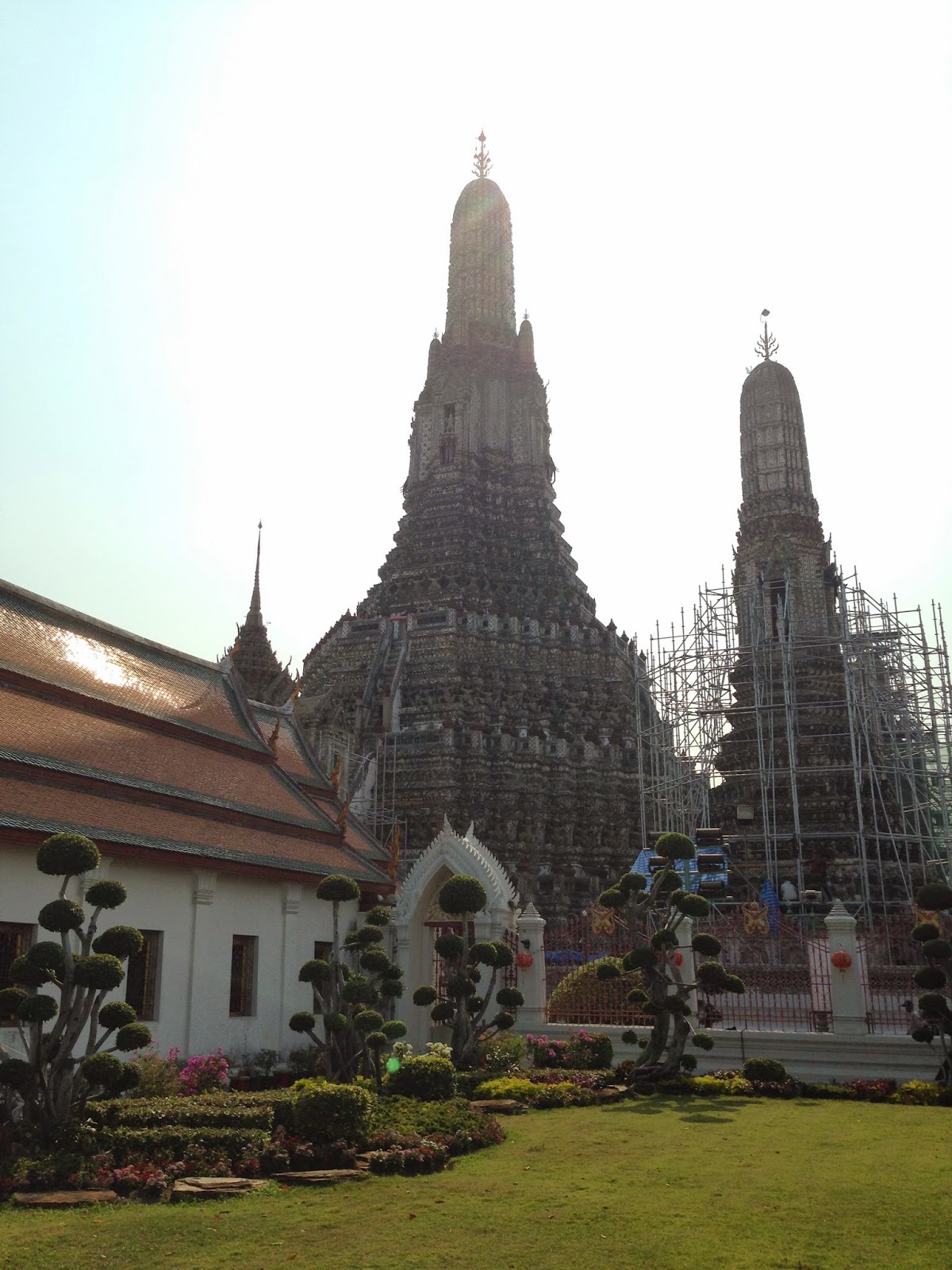 This temple was under restoration, but is unique in its own way. 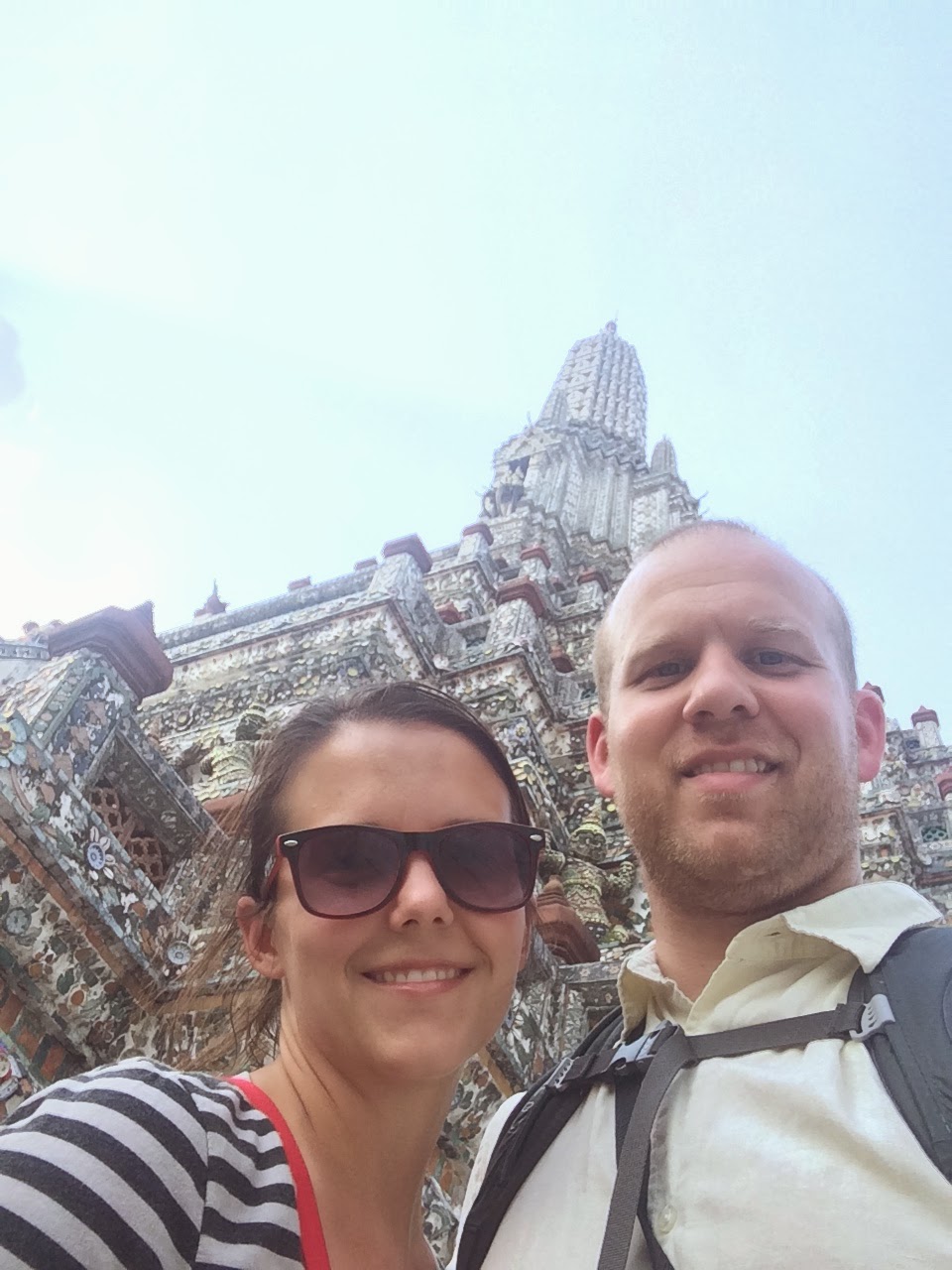 One of the spires without construction 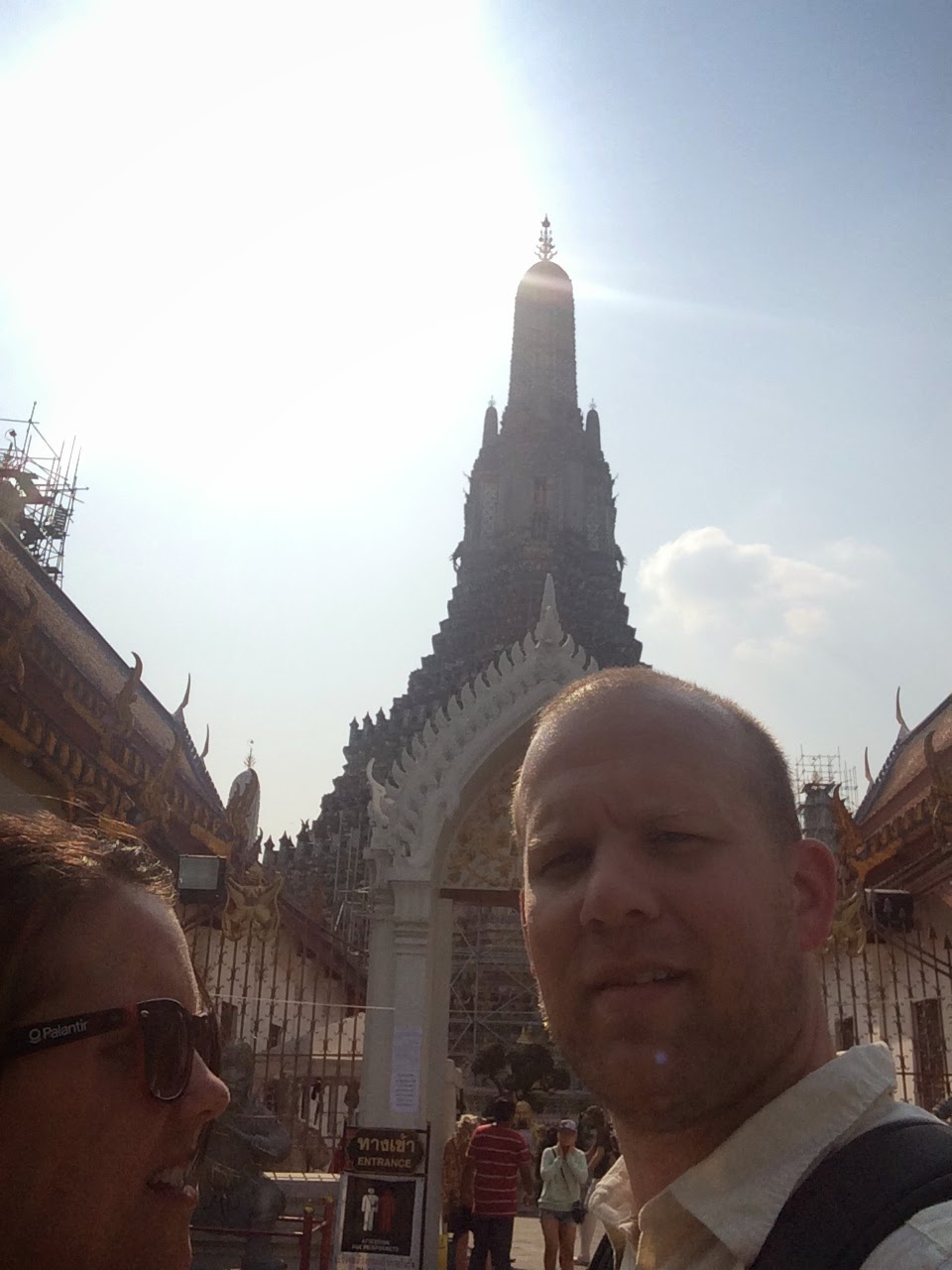 Not super flattering but a picture at the entrance
Wat Saket (The Golden Mount): 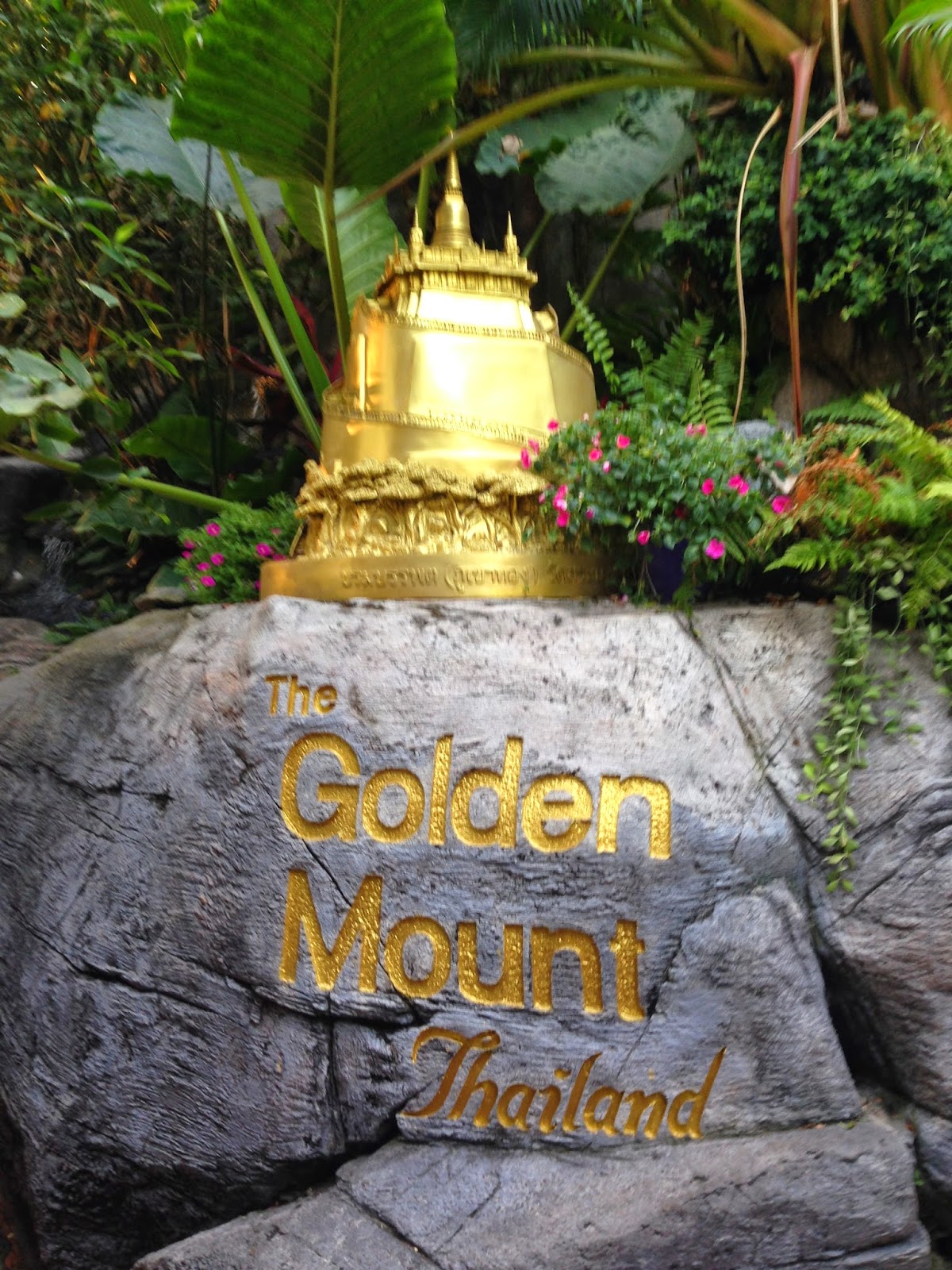 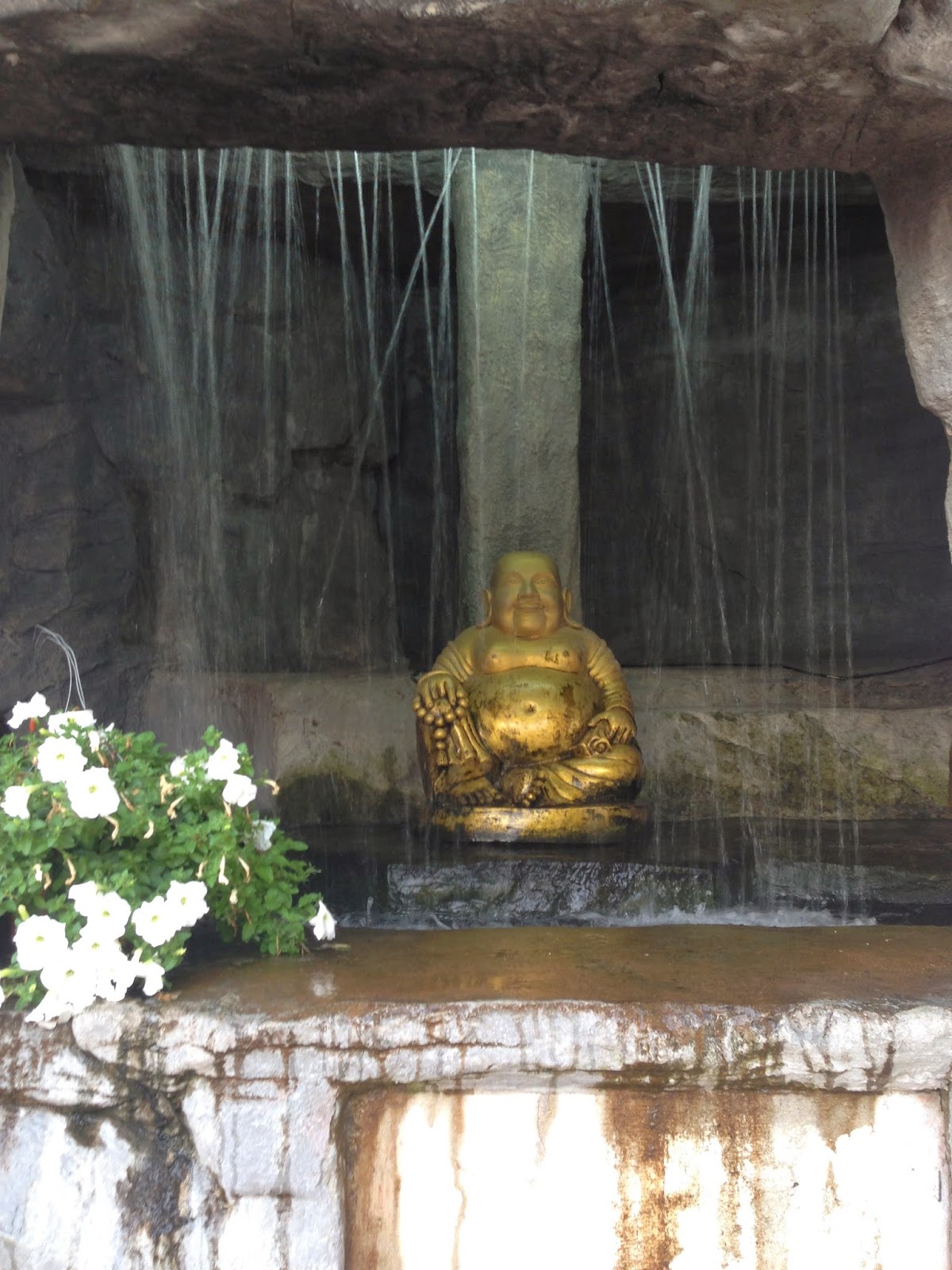 Happy Buddha in a waterfall. This Wat had several steps and was surrounded by lush greenery. The climb was interrupted by platforms which contained bells and gongs to ring (Jared loudly obliged). 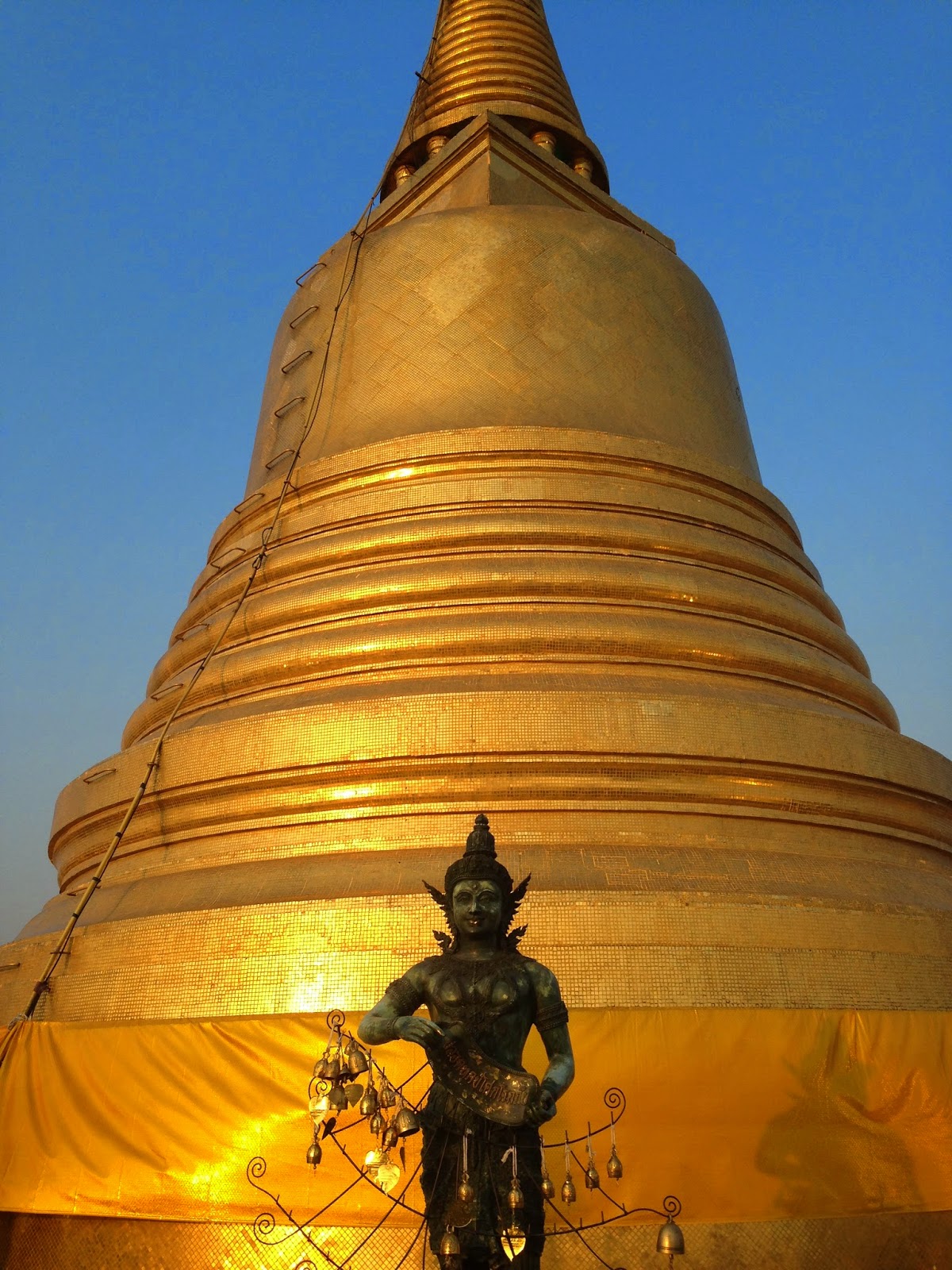 It was simply stunning as the sun set. 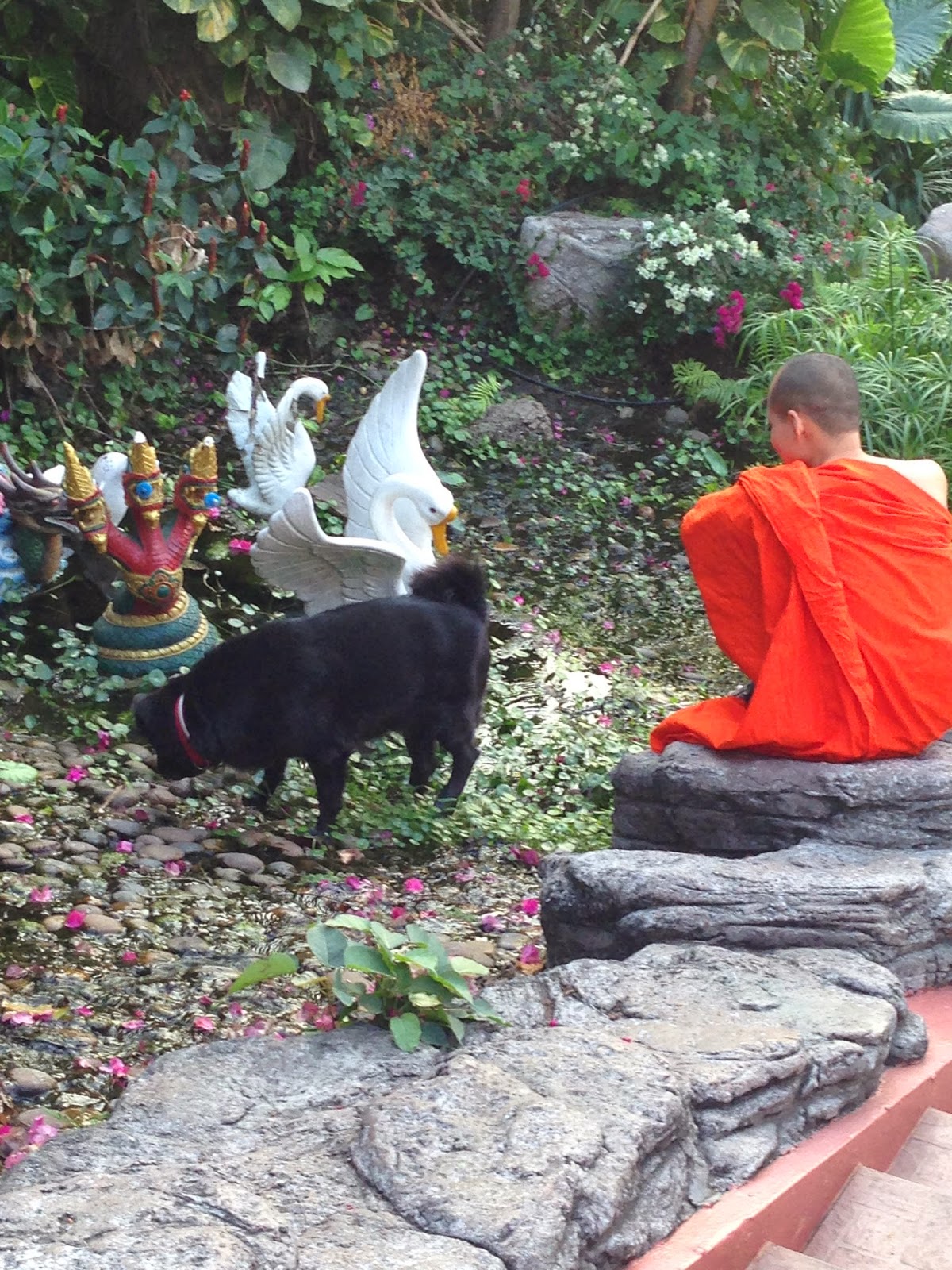 On the way down, I caught this monk letting a dog have a drink from one of the little ponds.
Ayutthaya:
Ayutthaya is considered the second ancient Siamese capital in Thailand. It was founded in 1350 and was destroyed in 1767 by the invading Burmese. It was at that time that Bangkok was established as the capital of Thailand. Anyway, it was very cool to see the ruins and the audio tours began to give us a context for understanding Angkor Wat. Unfortunately, I don't remember the names of all the places we saw. But here are the pictures and some commentary: 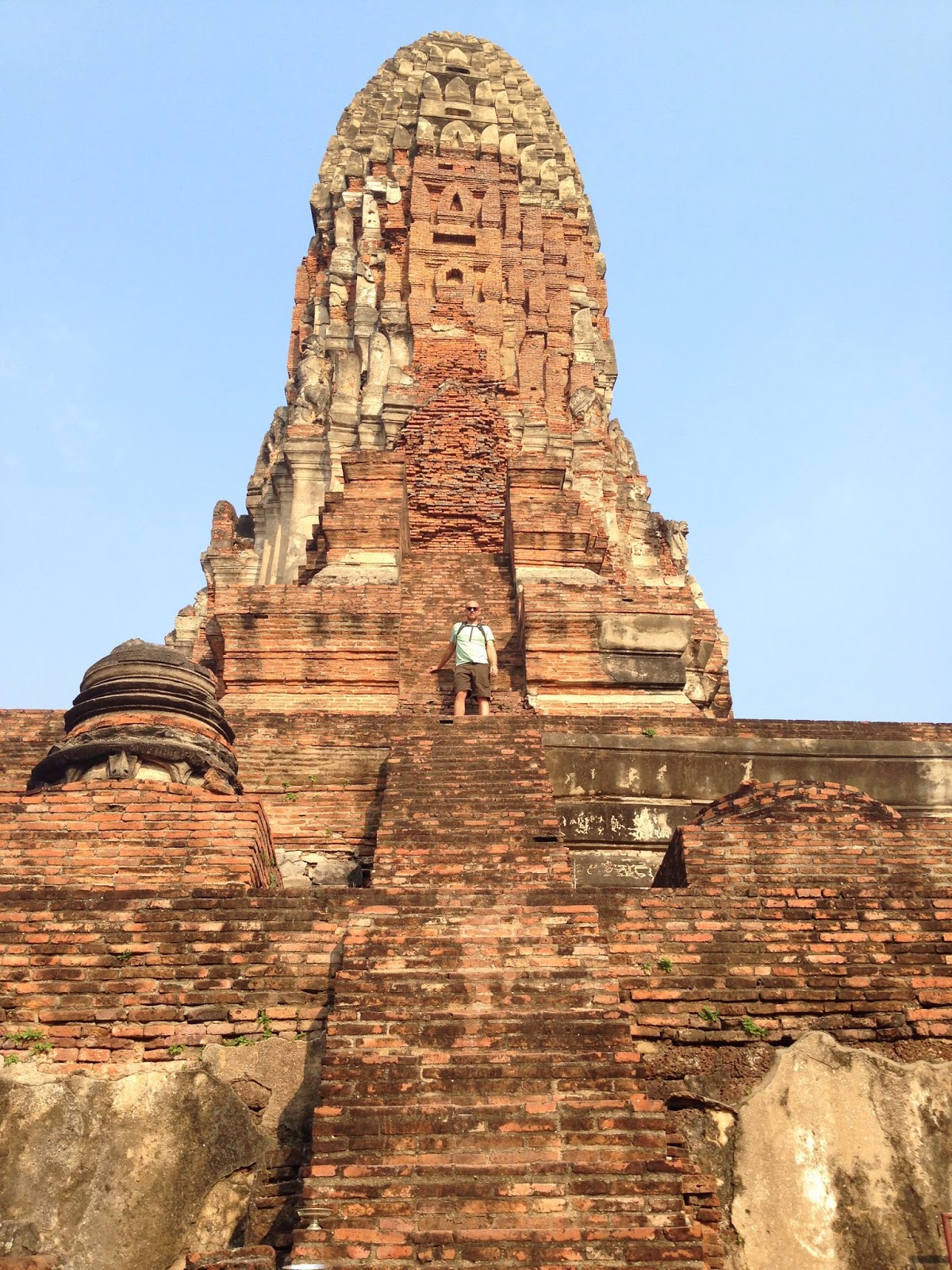 Jared climbed to the top, I stayed down below. 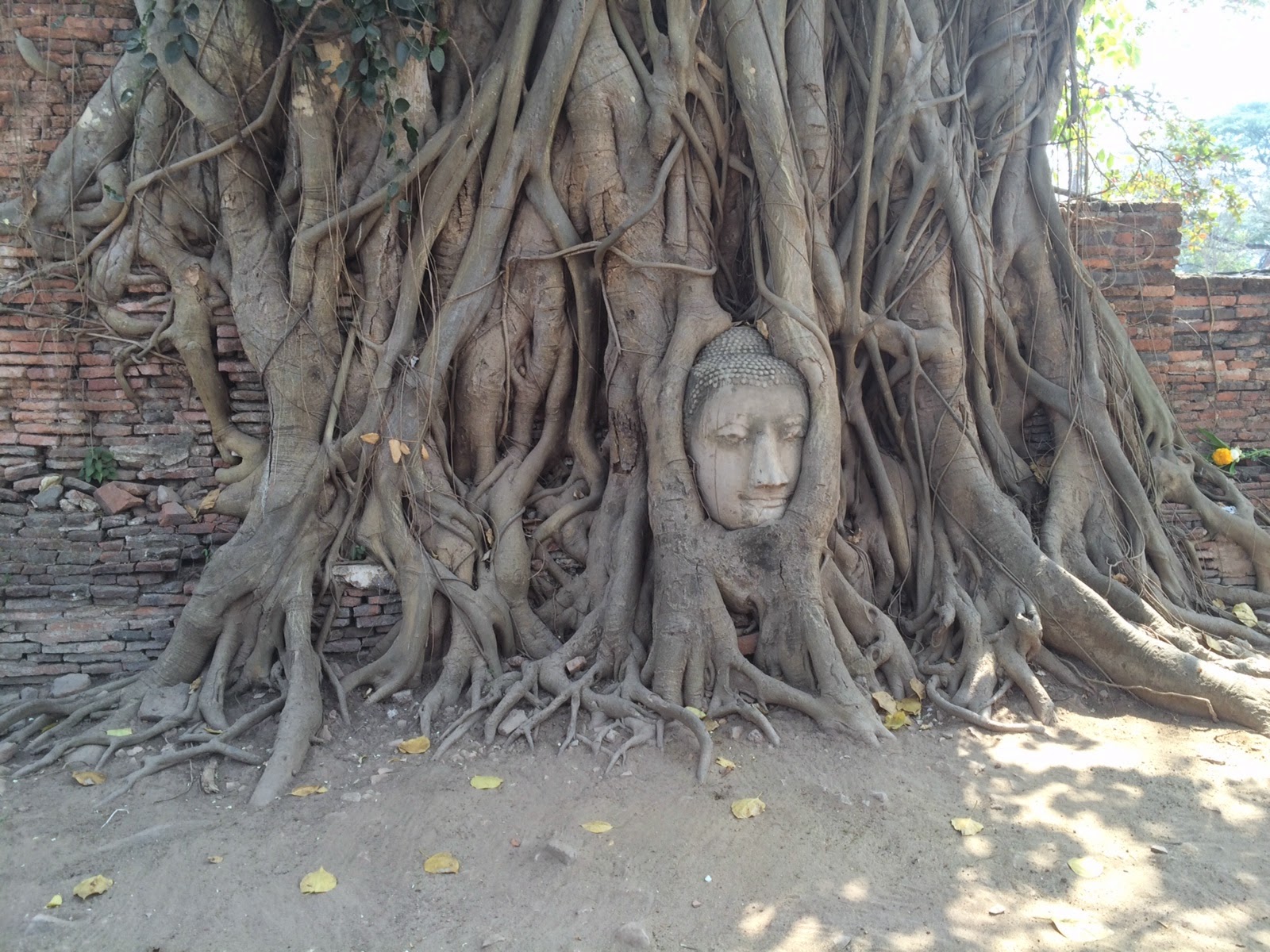 This Buddha in the Bodhi tree at Wat Maha That was very cool to see and quite unique. It is a Bodhi tree that has grown around a Buddha image. 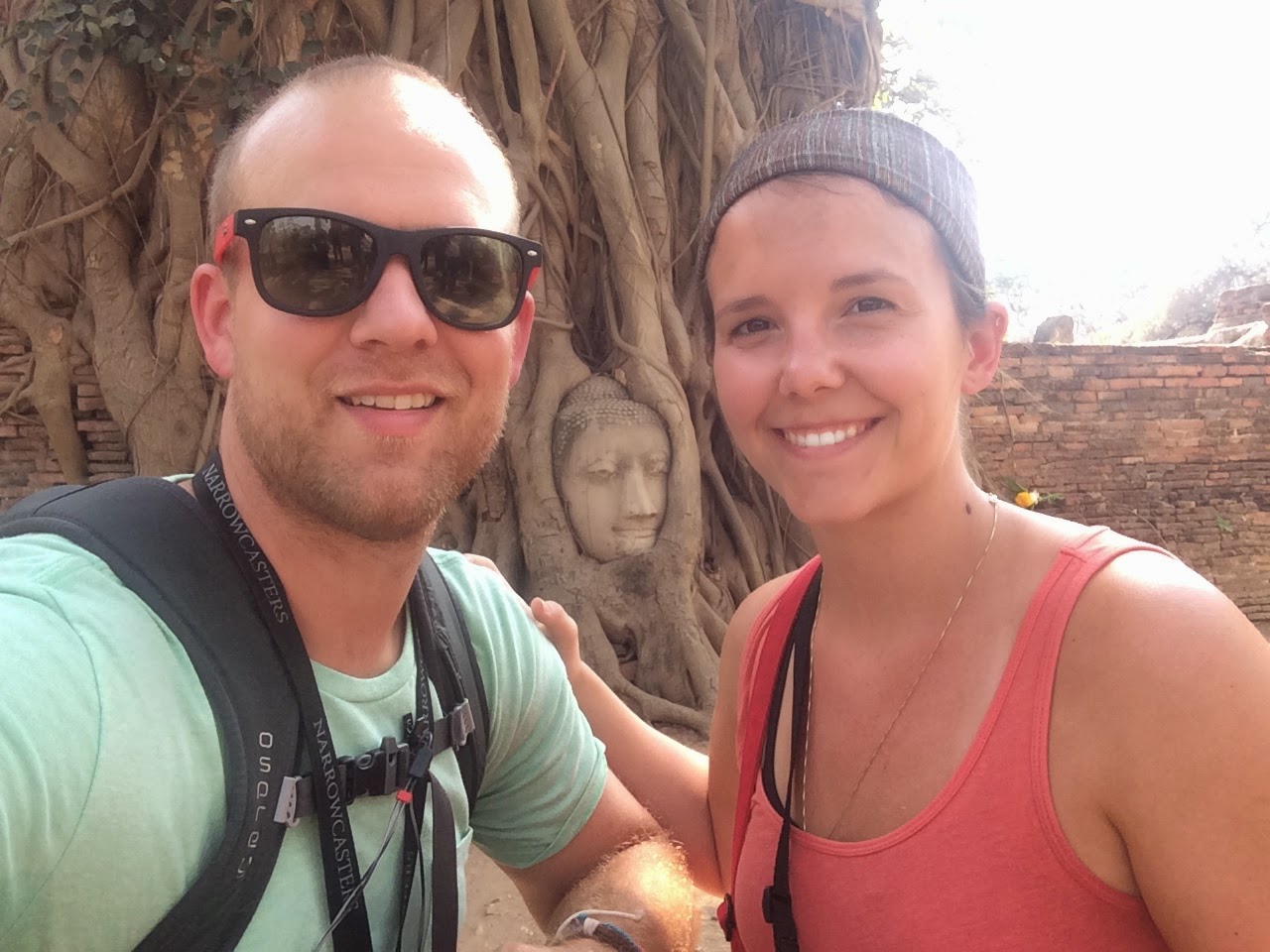 There were signs about respecting the Buddha during picture taking (do not straddle the Buddha, etc.) which is a sad commentary on the level of respect paid to these religious sites by tourists. 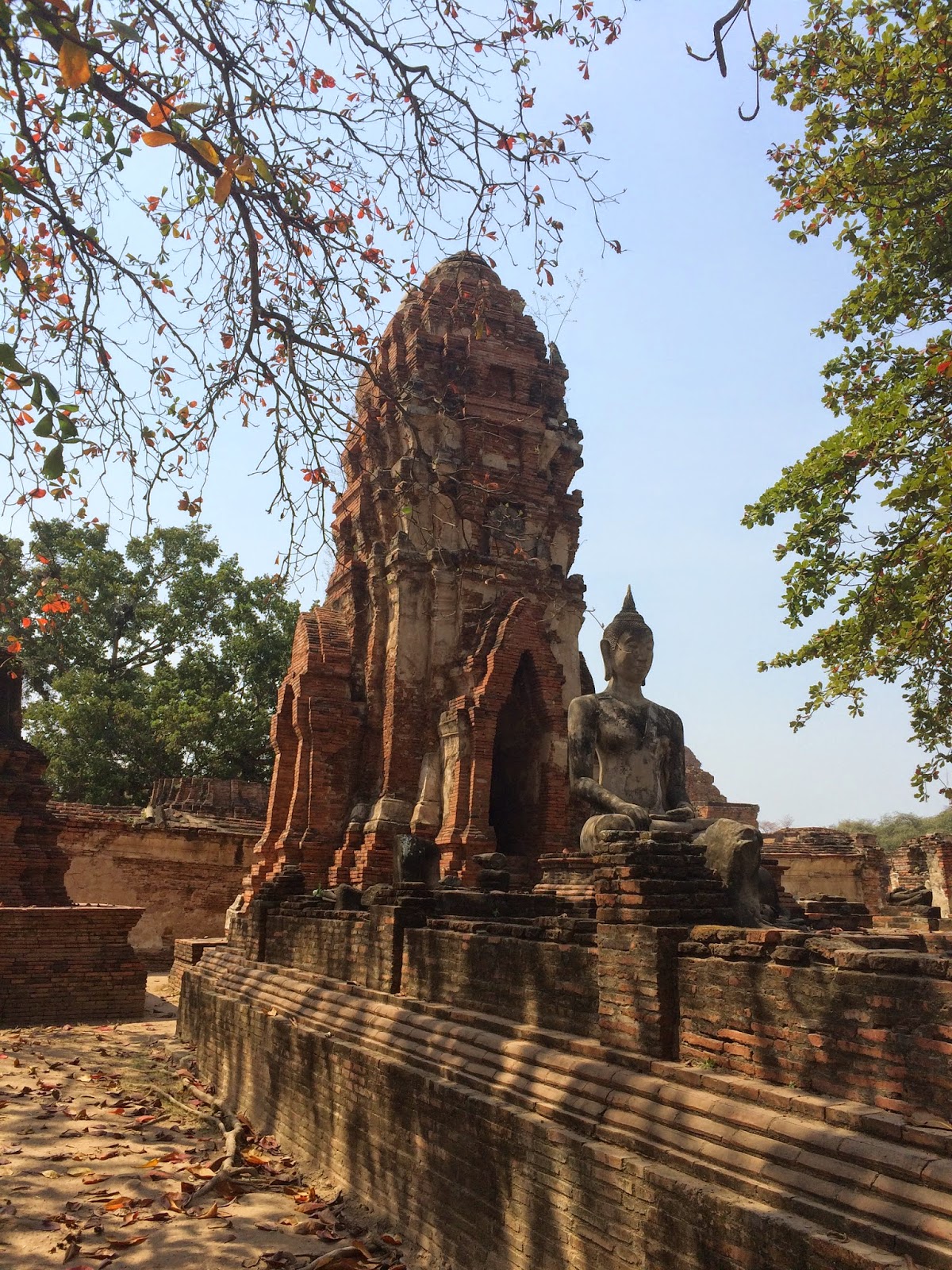 A Buddha and small prasat (temple) 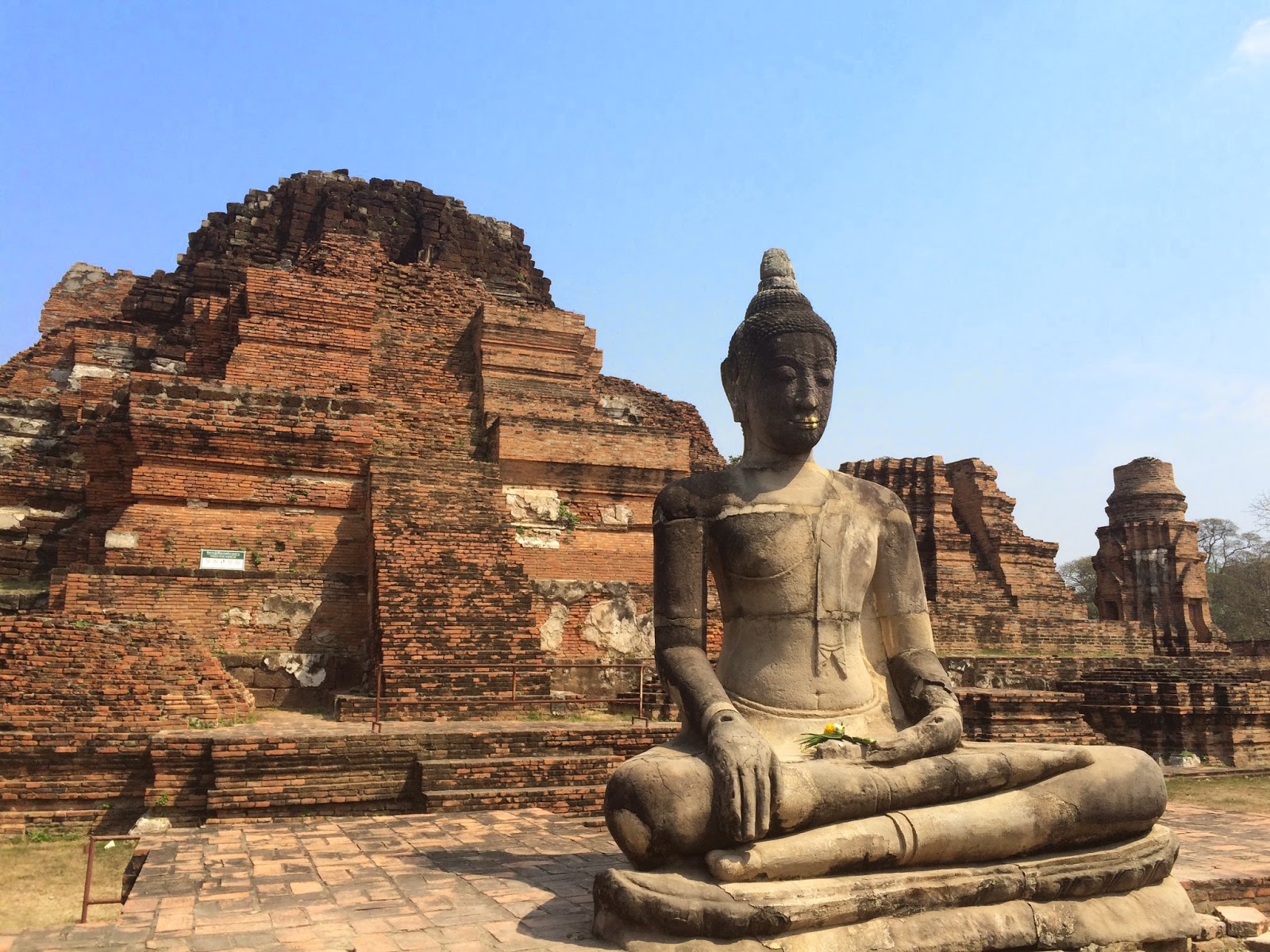 The sizes of some of the Buddha statues, carved from stone, are so impressive. 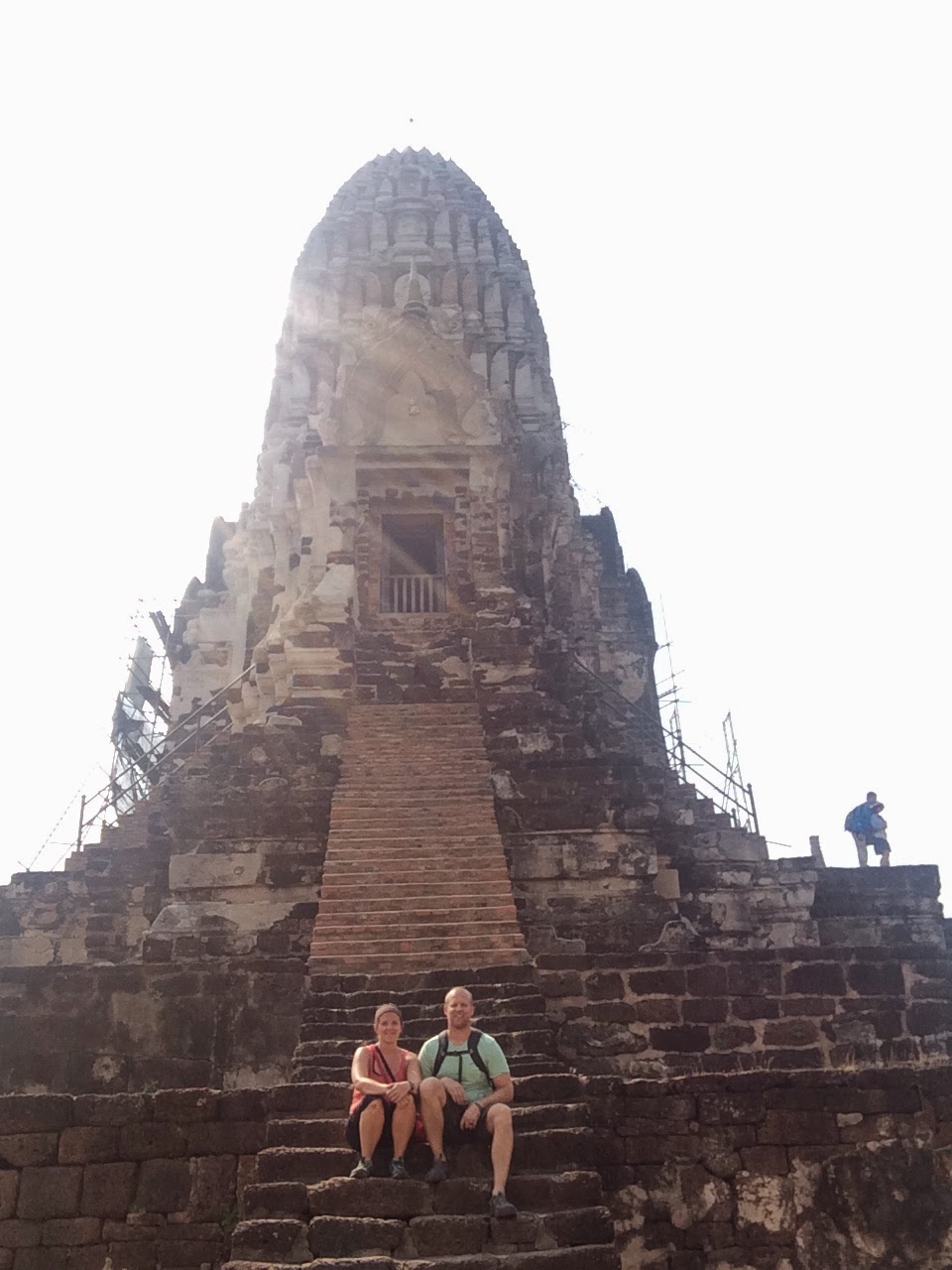 On the steps up to the central prasat 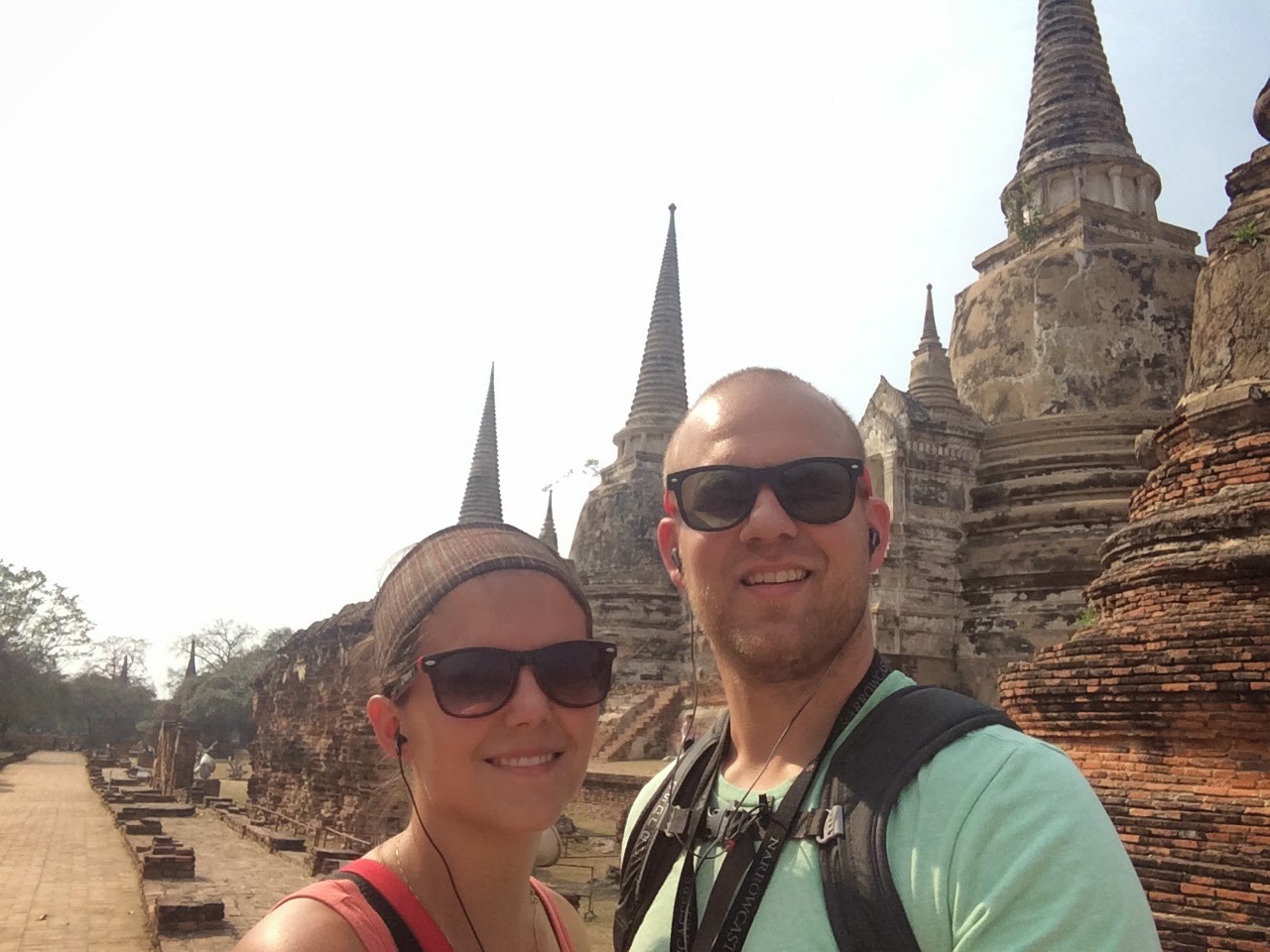 This is Wat Phra Sri Sanphet, one of the larger (and probably most iconic) sites in Ayutthaya. It has three large chedis still relatively intact which house the remains of three Siamese kings. 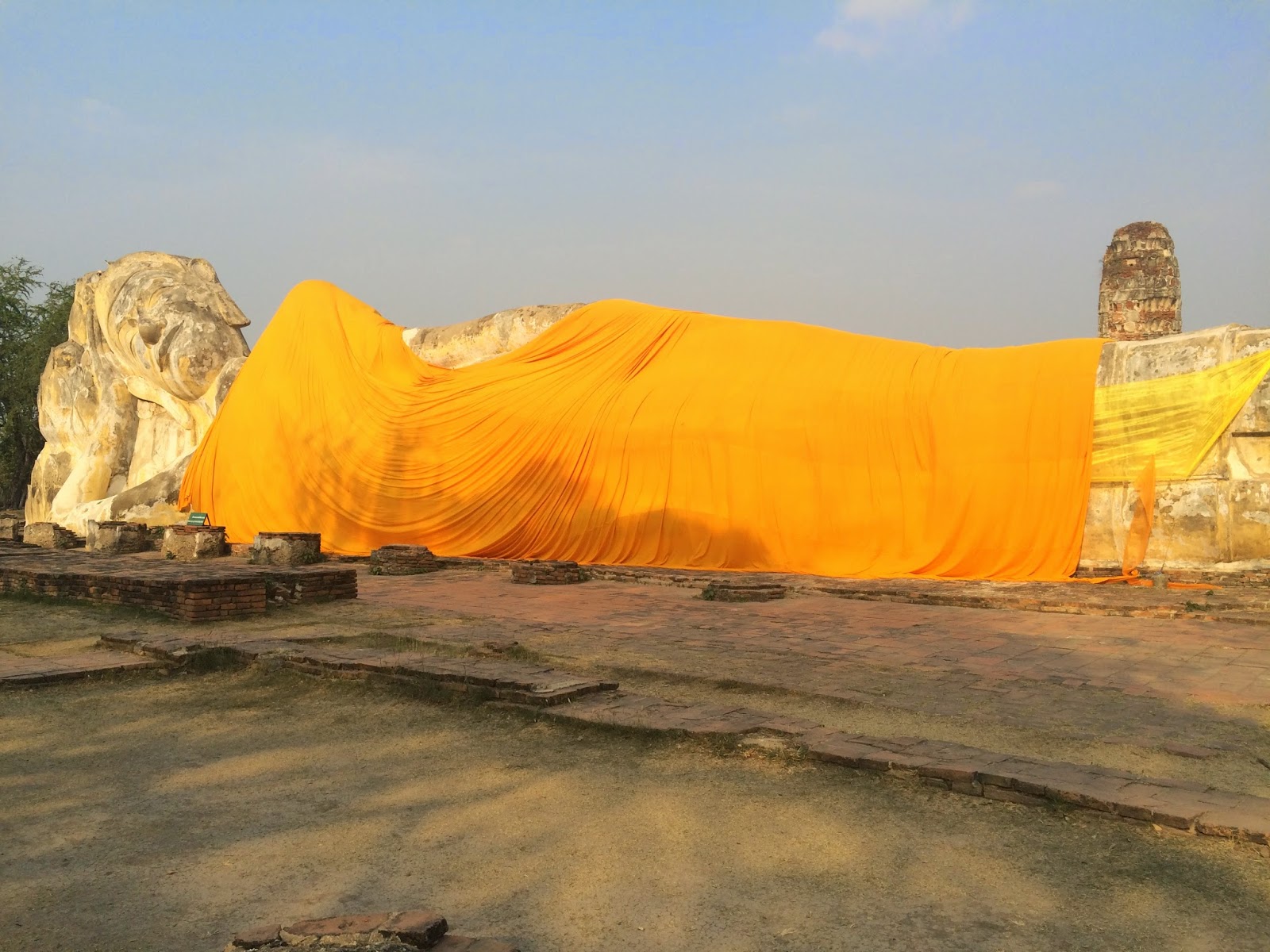 A smaller, all stone reclining Buddha 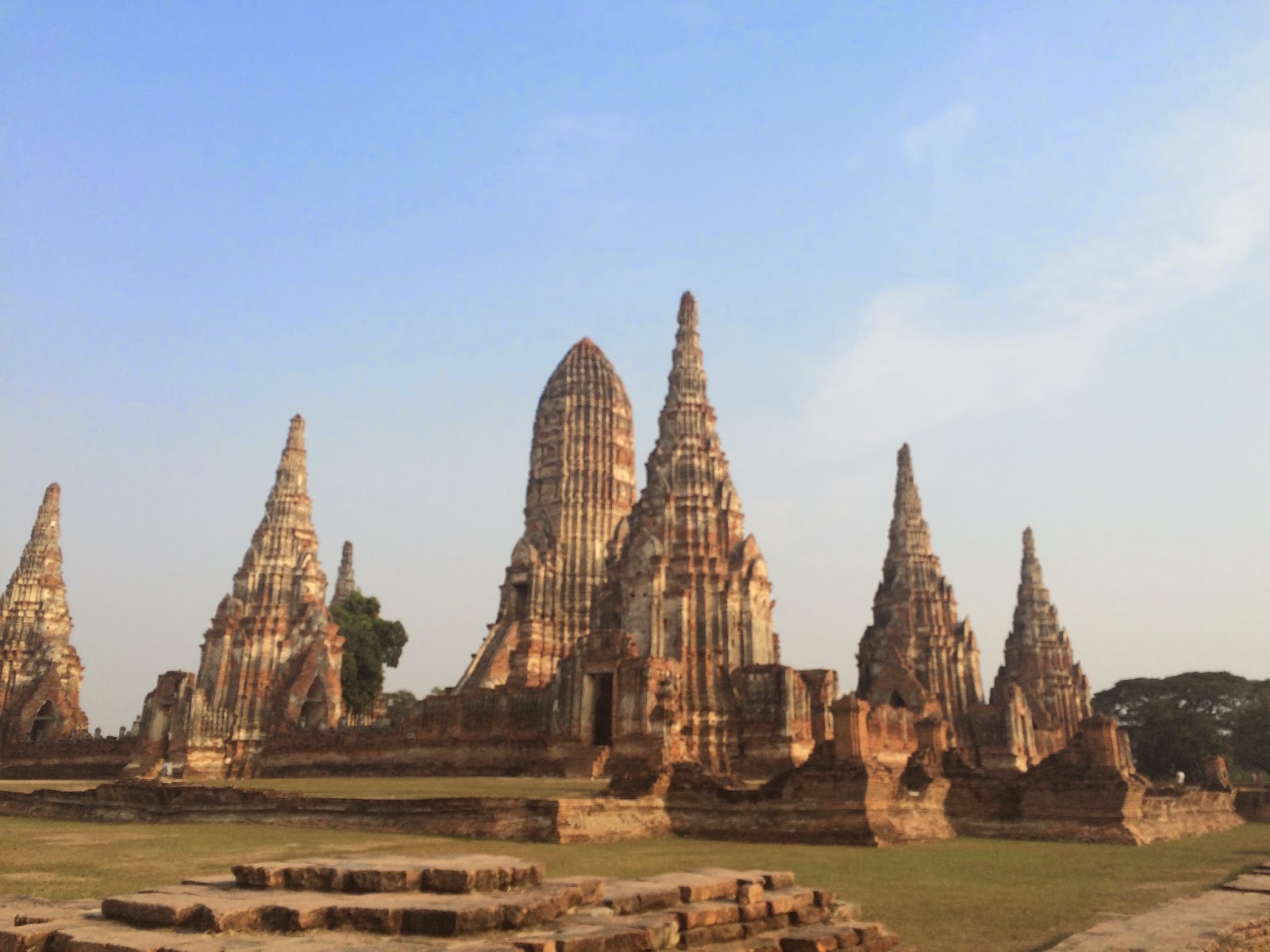 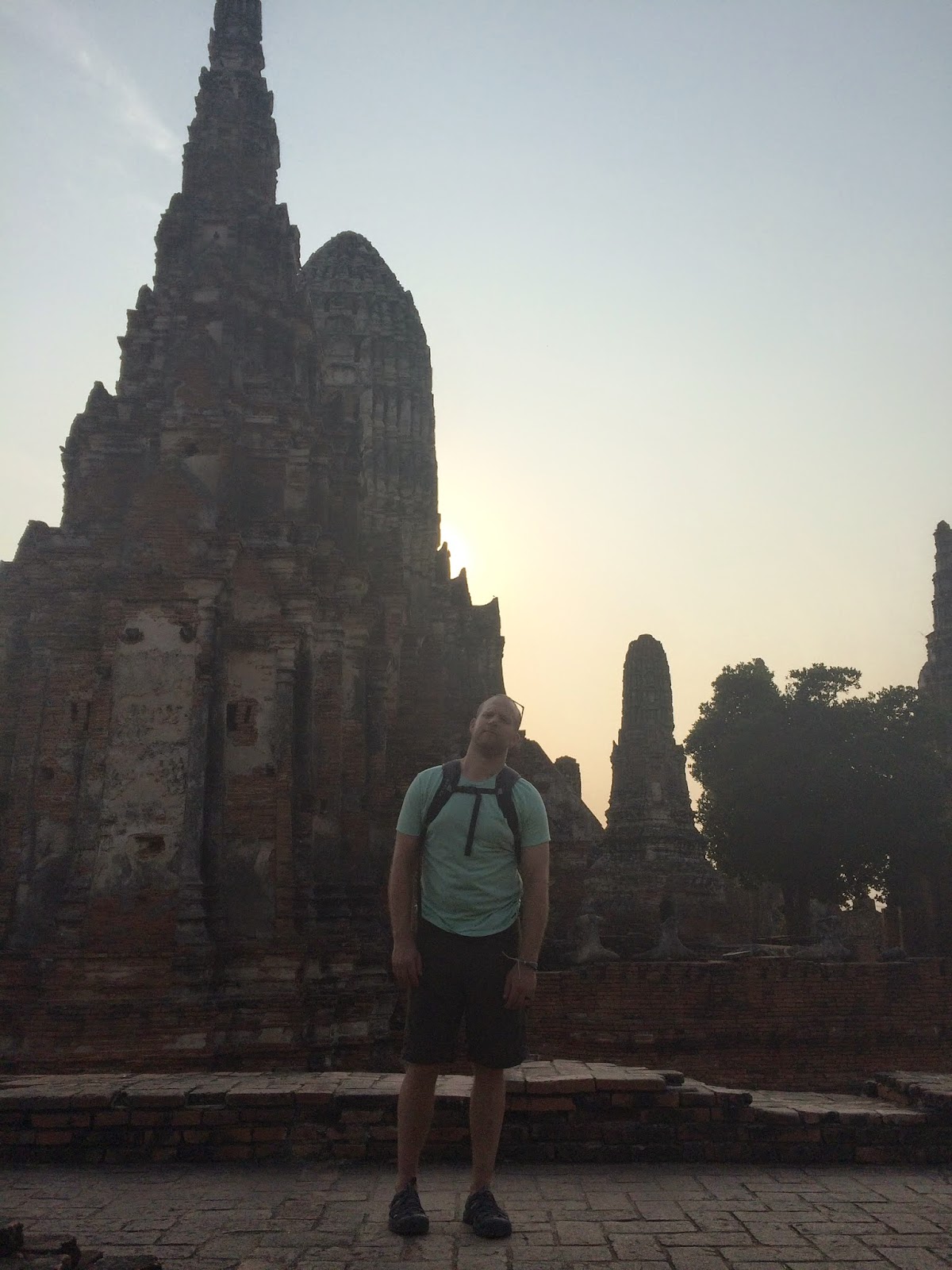 Jared was starting to feel tired after our day of Wat trekking.
Grand Palace:
The Grand Palace in Bangkok is a marvelous complex, and it is easy to see why it is held in high esteem by the Thais. The Emerald Buddha is housed here and is considered the most revered image of Buddha in Thailand. Pictures are not allowed of this Buddha.﻿
﻿ 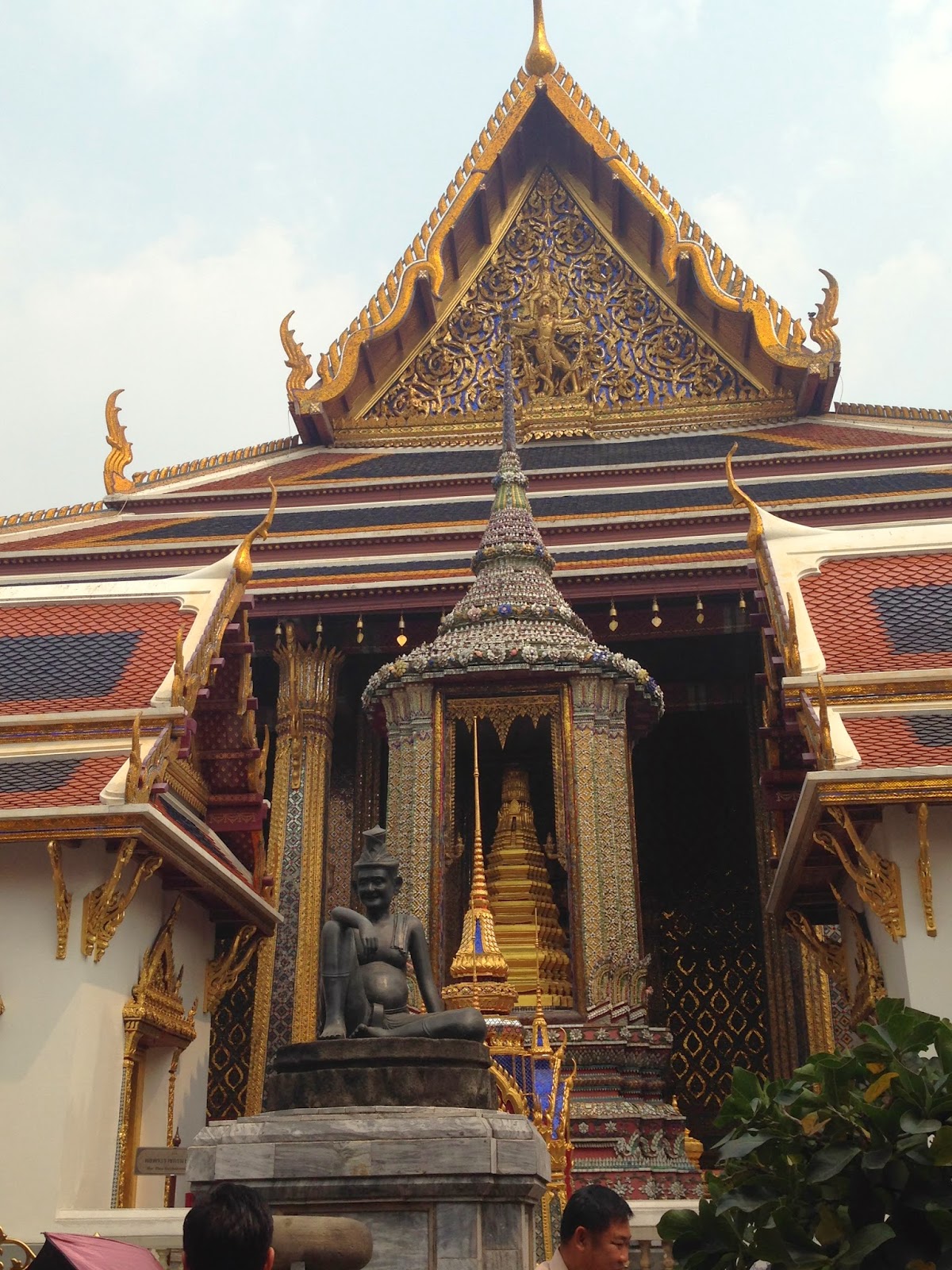 The hermit doctor at the entrance to the grounds. He is believed to be the originator of Thai herbal medicine. 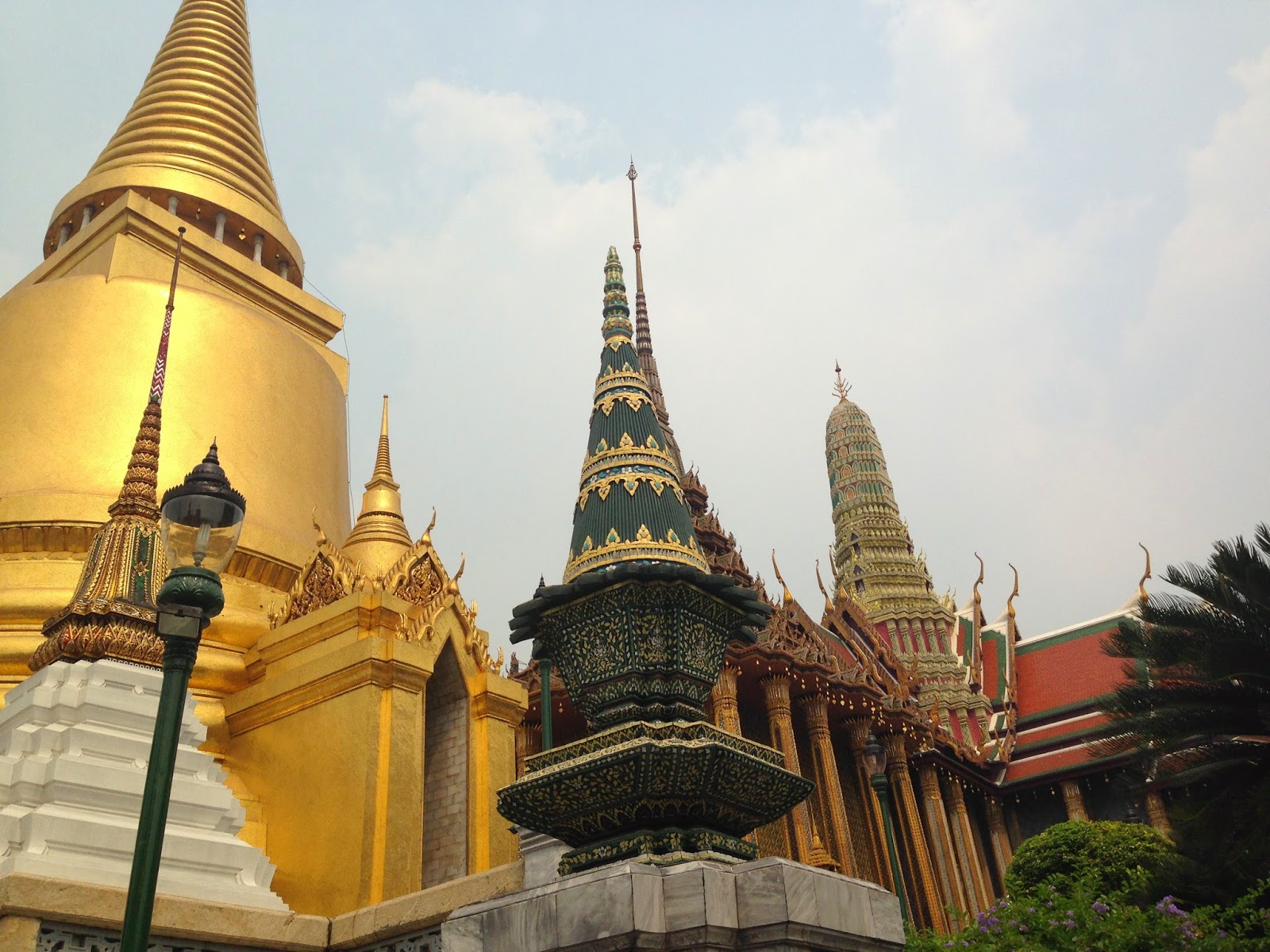 Gold is, obviously, a common color choice for decoration. 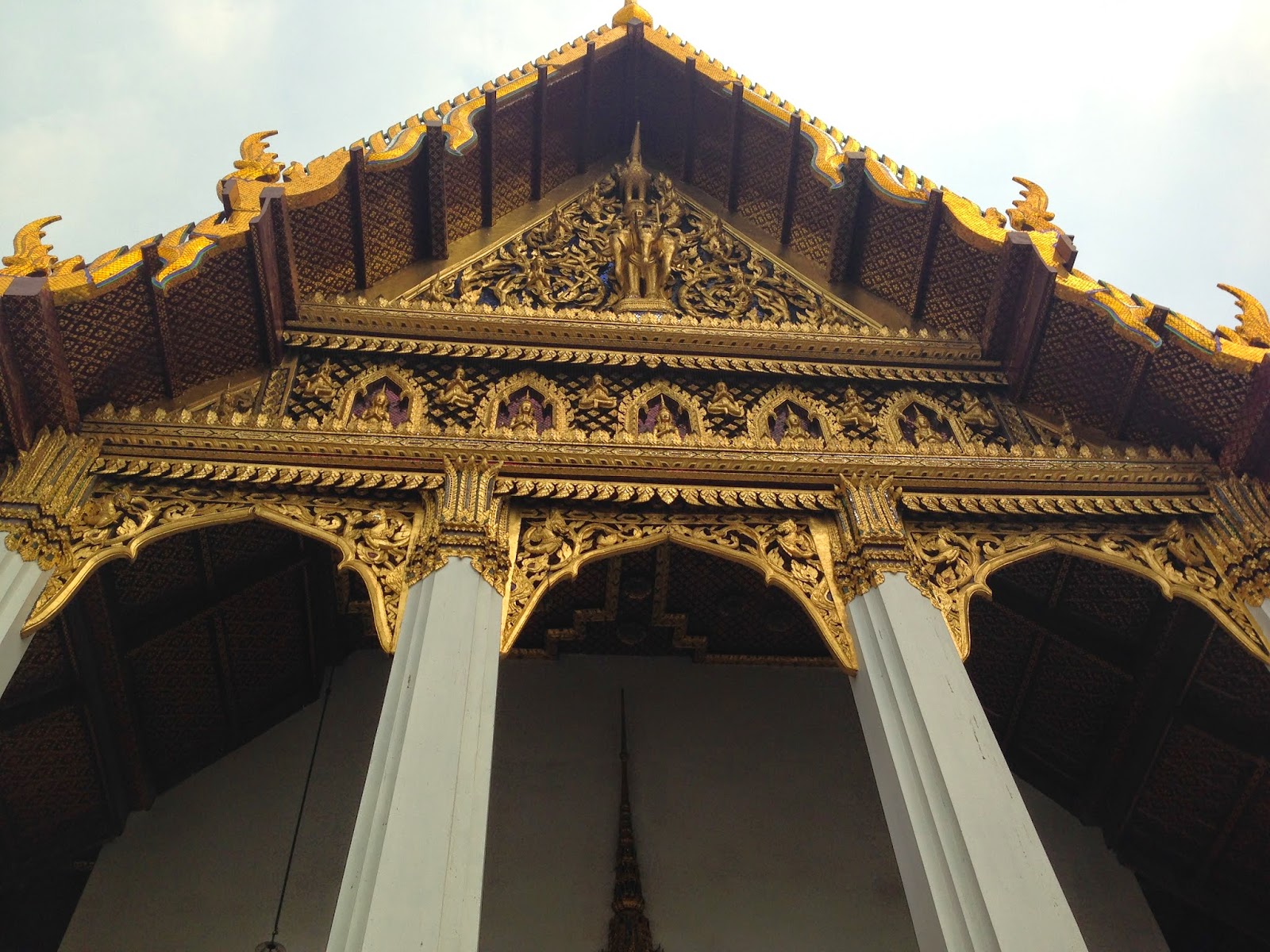 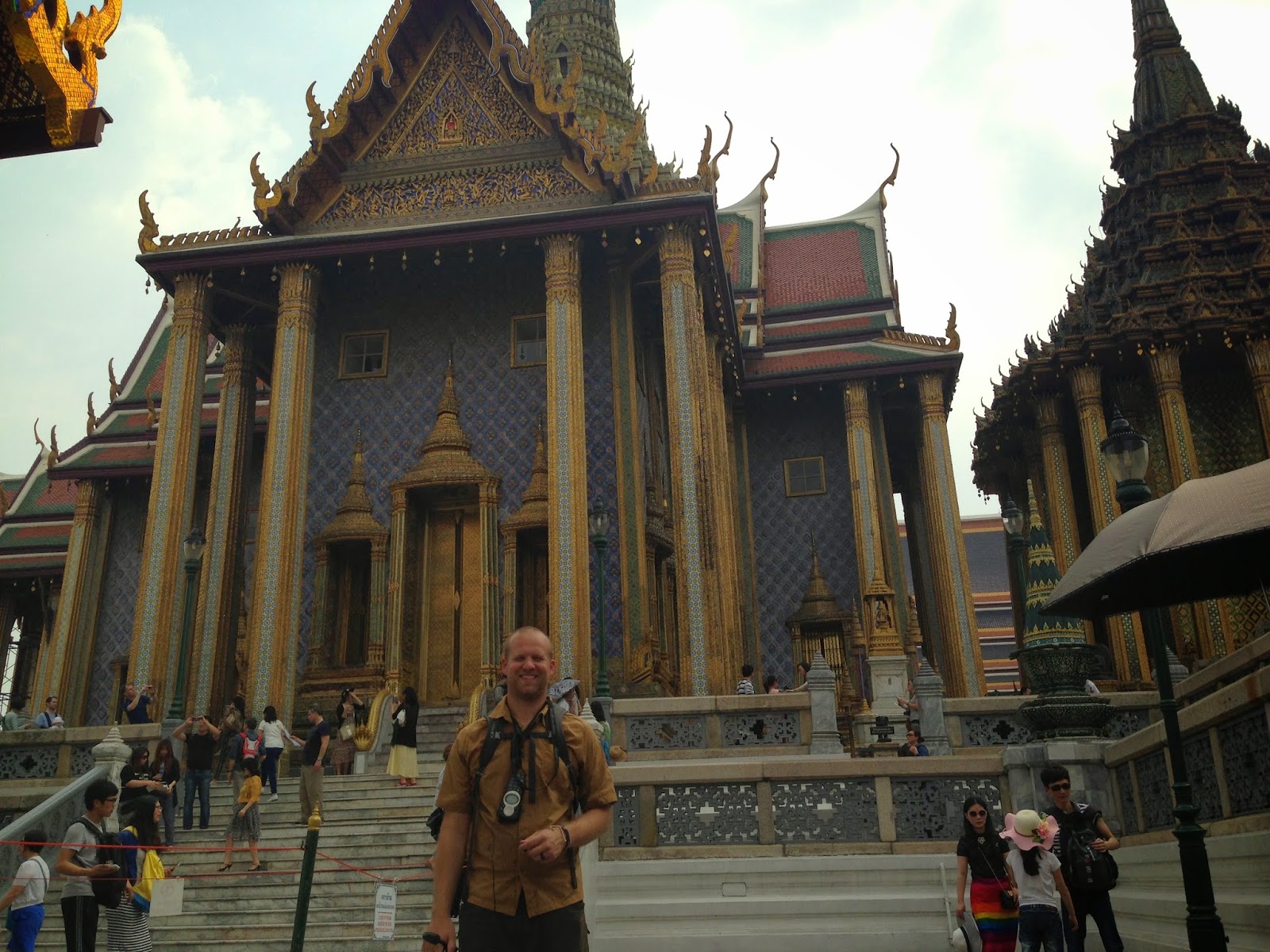 Many of the temples and auxiliary buildings are closed to tourists, but the exteriors are still stunning. 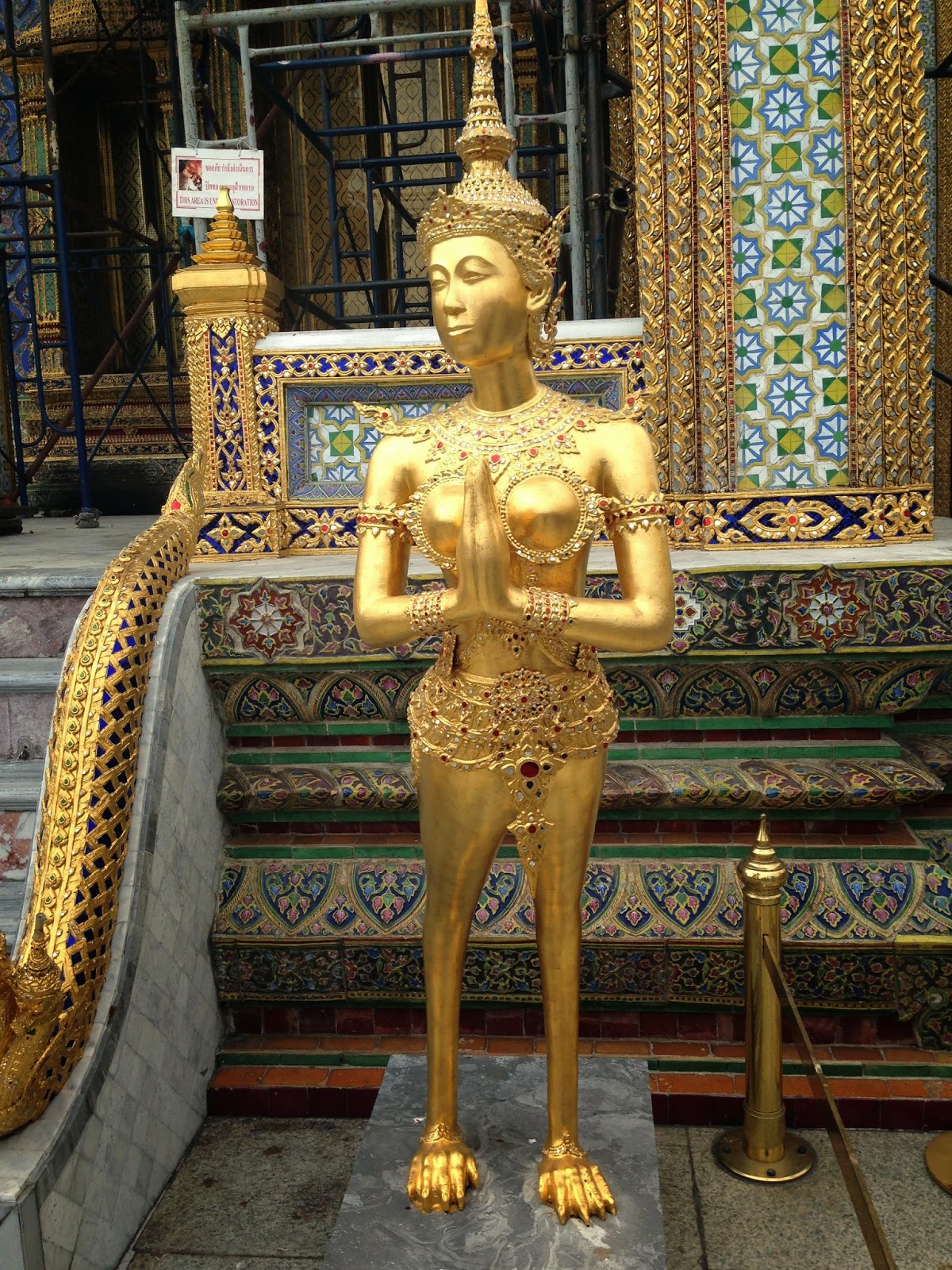 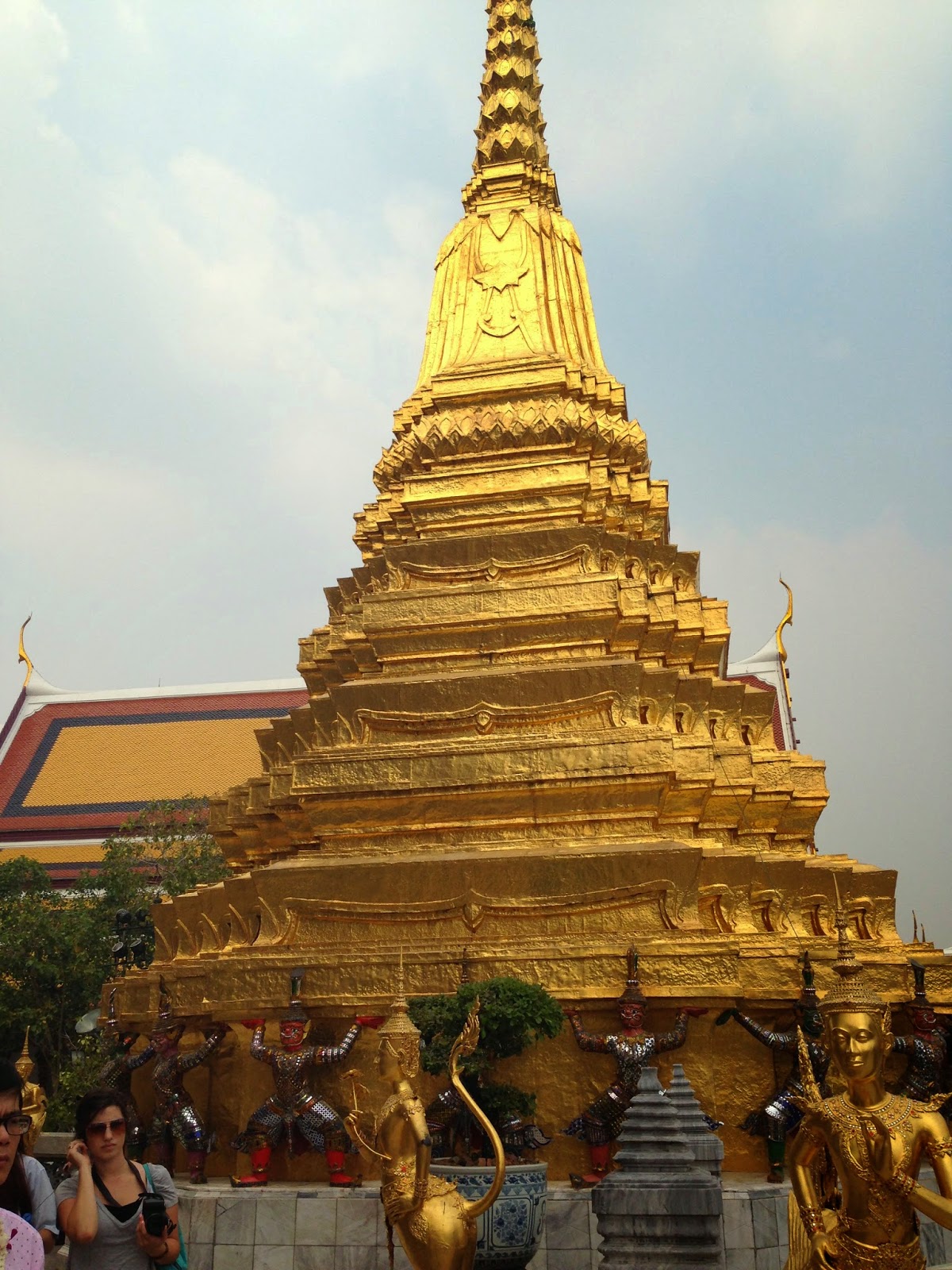 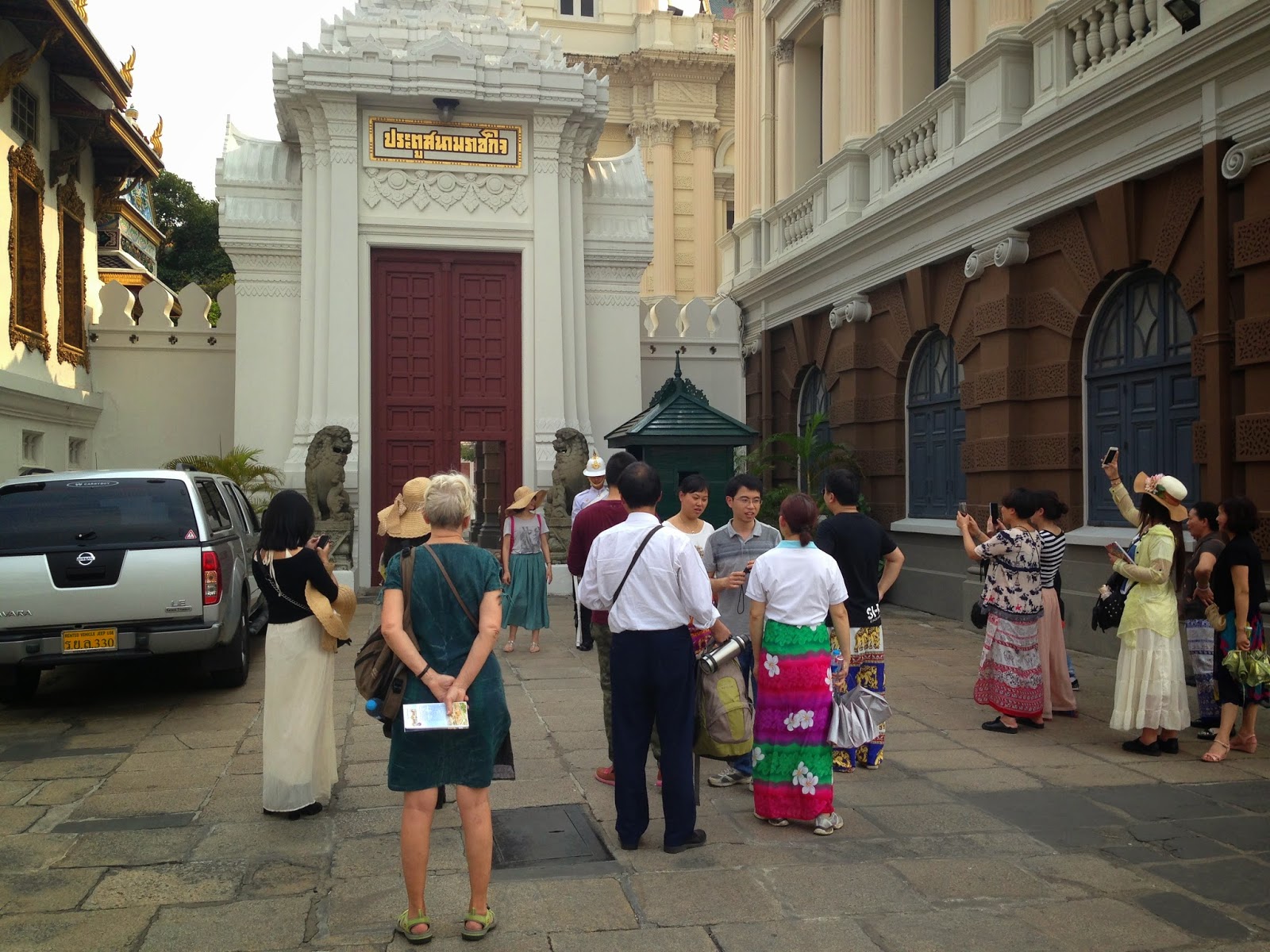 This picture is of the many tourists that lined up to take pictures with the Thai Royal guard. They're not quite as rigid as their British counterparts but close. 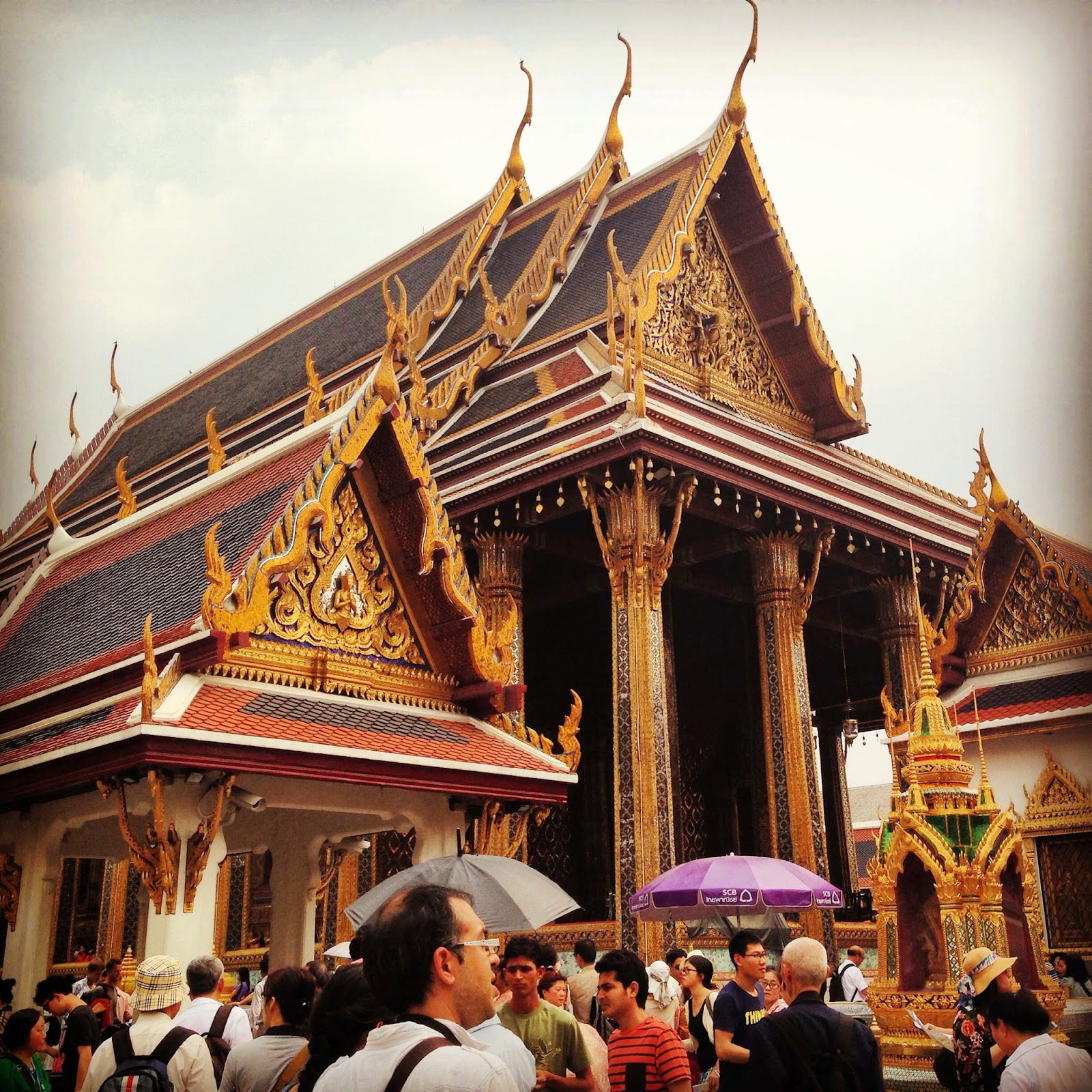 The temple which houses the Emerald Buddha
We also saw some Muay Thai boxing, went to the weekend market and took our first boat taxi. Overall, Bangkok was a nice, clean city with excellent options of public transportation (although some of the tuk-tuk drivers can be sneaky) which has some beautiful, cultural sites. I think 6 days was plenty of time and we both were ready for a change of scenery. Next up, we visited the Cambodian city of Siem Reap and explored the breath taking ruins of Angkor Wat!﻿
Posted by Christy at 6:03 AM