Getting into Cambodia has been our most interesting border crossing yet. Where previously we have either had a bus which took us all the way through or we have crossed via plane, this particular crossing did not have the former as an option and the latter, well, that would have just been silly. So, we did as was recommend by the online people-who-have-gone-before and started the journey on a bus from Bangkok. Then, we got off the bus about a quarter of a mile from the border. Due to relations between the two countries, crossing all the way through is not an option. After walking through (the official crossing) we had to buy (provide bribes for) our visas. After the official crossing part is important as several swindlers try to trick you into buying (and paying way more for) a visa before the official stop. After the visas, we had to wait in another line to get fingerprinted, photoed and finally stamped. Then, people try to get you to get on the 'free' bus where they take you to another much more expensive bus to go the hour into Siem Reap. On the first bus, we had met a couple from Switzerland who had also read the advice to take a taxi at this point. So, we all joined up and shared a taxi into the city. Unfortunately, once we entered the city we were again confronted by touts. Our taxi stopped and several tuk-tuk drivers tried to get us out of the taxi and to ride with them to our hotels because "the taxi driver didn't know where the hotels were." We all knew this wasn't true and stuck together in our refusal to leave the taxi until we were at our destination. It worked and we successfully avoided an obvious swindle! It's good to have teamwork when confronted with these issues.

Our first stop in Cambodia was Siem Reap. This is the main city/hub for the primary tourist attraction in Cambodia: the ancient ruins of Angkor Wat from the Khmer empire dating from the 9th to the 13th century. This is a huge complex of Hindu and Buddhist palaces and temples. There are around 20 temples total in the 400 square kilometer archaeological park. Most of the temples we toured were constructed by Jayavarman VII and were intended to be Buddhist temples (the temples prior to these were constructed as Hindu). However, after his rule, Jayavarman VIII converted the city back to Hinduism. As such, all of the faces of Buddha were removed or altered to represent Hindu gods. Literally, there were no Buddha heads anywhere. All of the faces were either removed or altered. It was crazy and we kept trying to catch one that they missed. They didn't miss any.

Angkor Wat:
We'll start with the big kahuna. This temple is next to Angkor Thom, the city discussed below. Angkor Wat was built by Jayavarman II and is considered an excellent example of not only Khmer architecture but Hindu symbolism as well. The temple is believed to have been constructed to venerate Lord Vishnu, act as a mausoleum for the king, and is designed to be a replica of the holy Hindu mountain where the god Shiva lives. 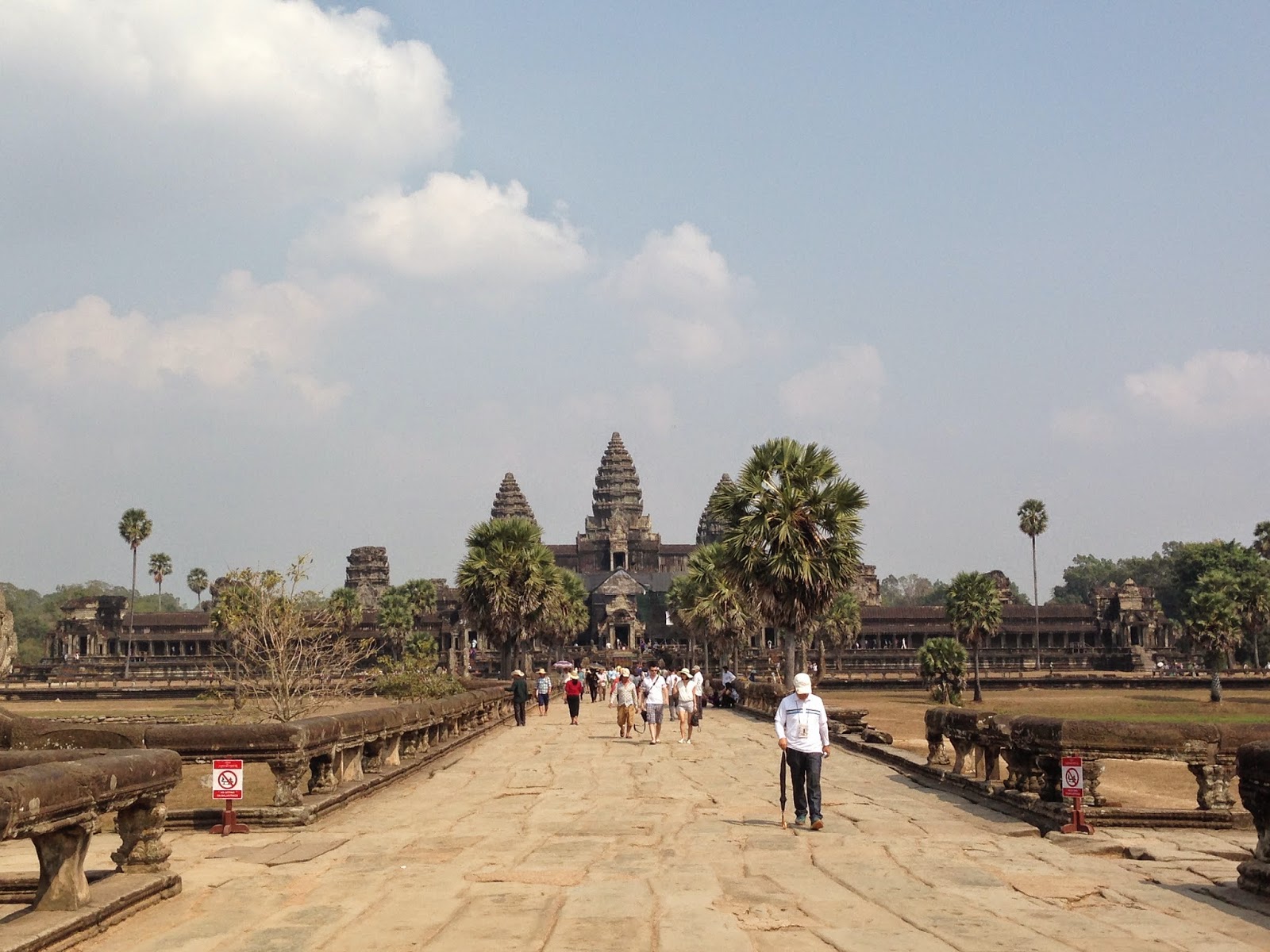 Walking up to the front gate of the temple. There are smaller buildings to the left and the right here which are meant to signify Earth. Prior to that there were two similar ones which represented hell. 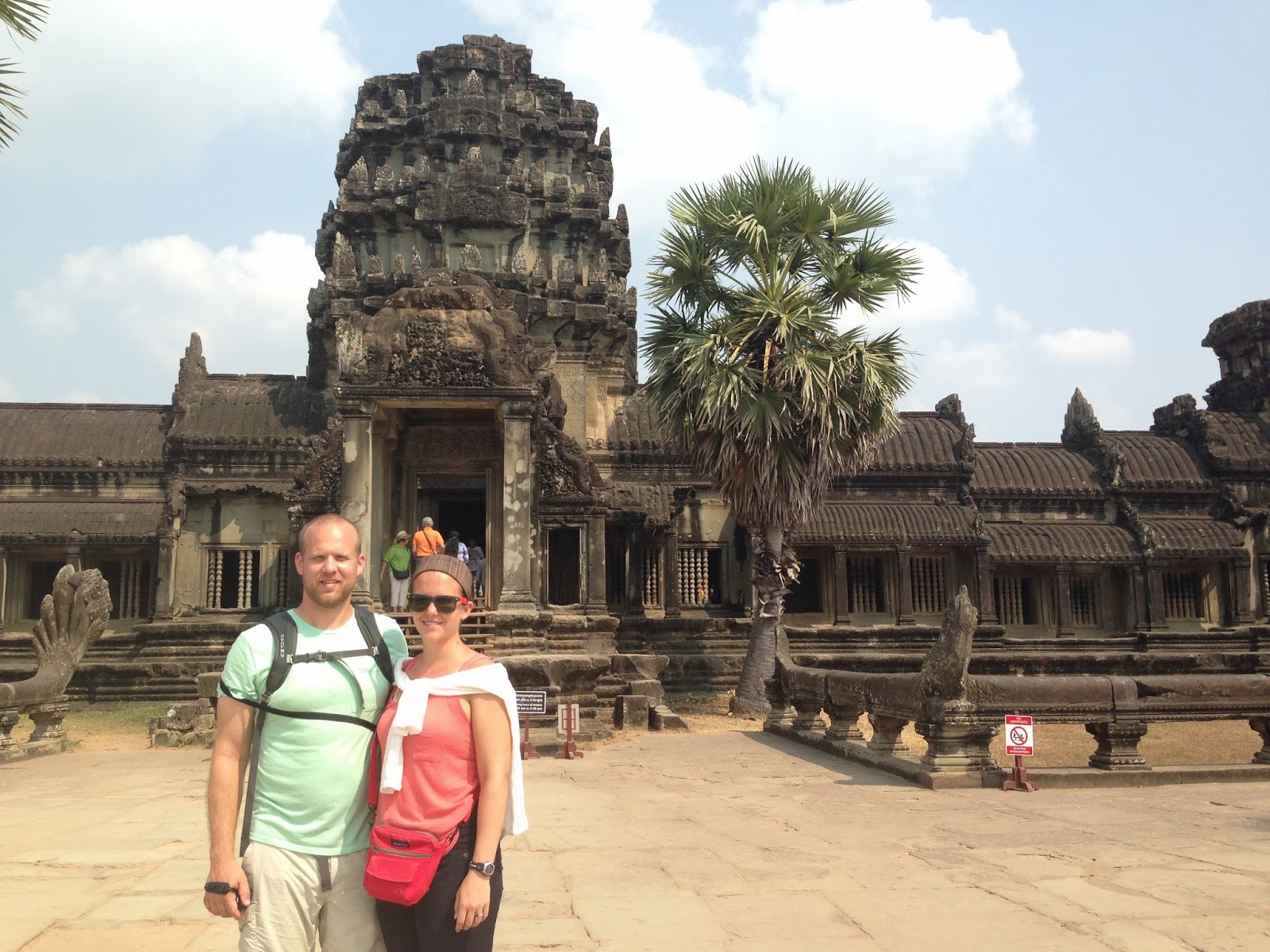 In front of one of the side entrances. You can see the end of the ballistrade to the right of us is the head of the serpent naga. The majority of ballistrades in Angkor Wat are naga carvings. 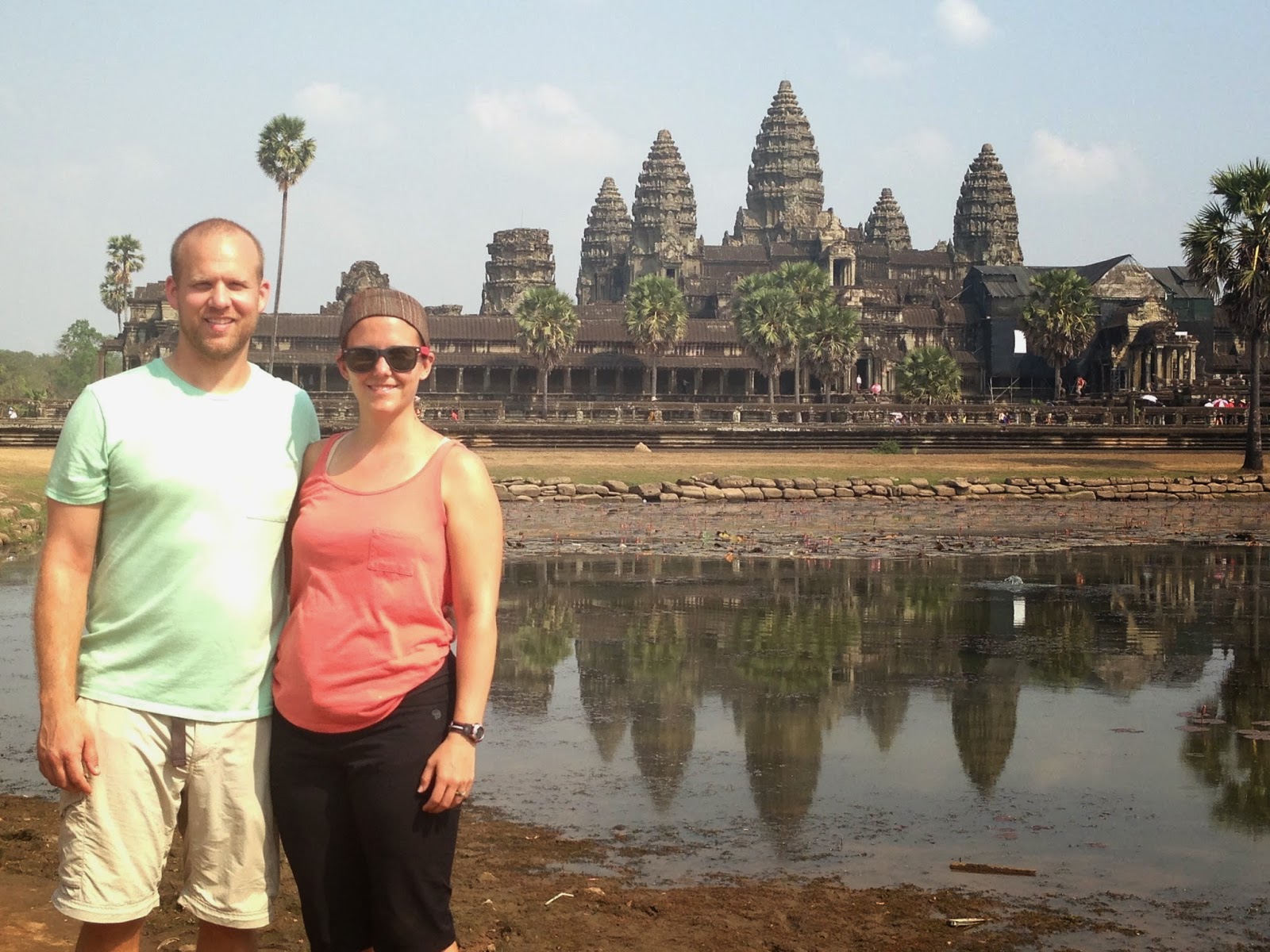 The whole façade with a pond reflection. 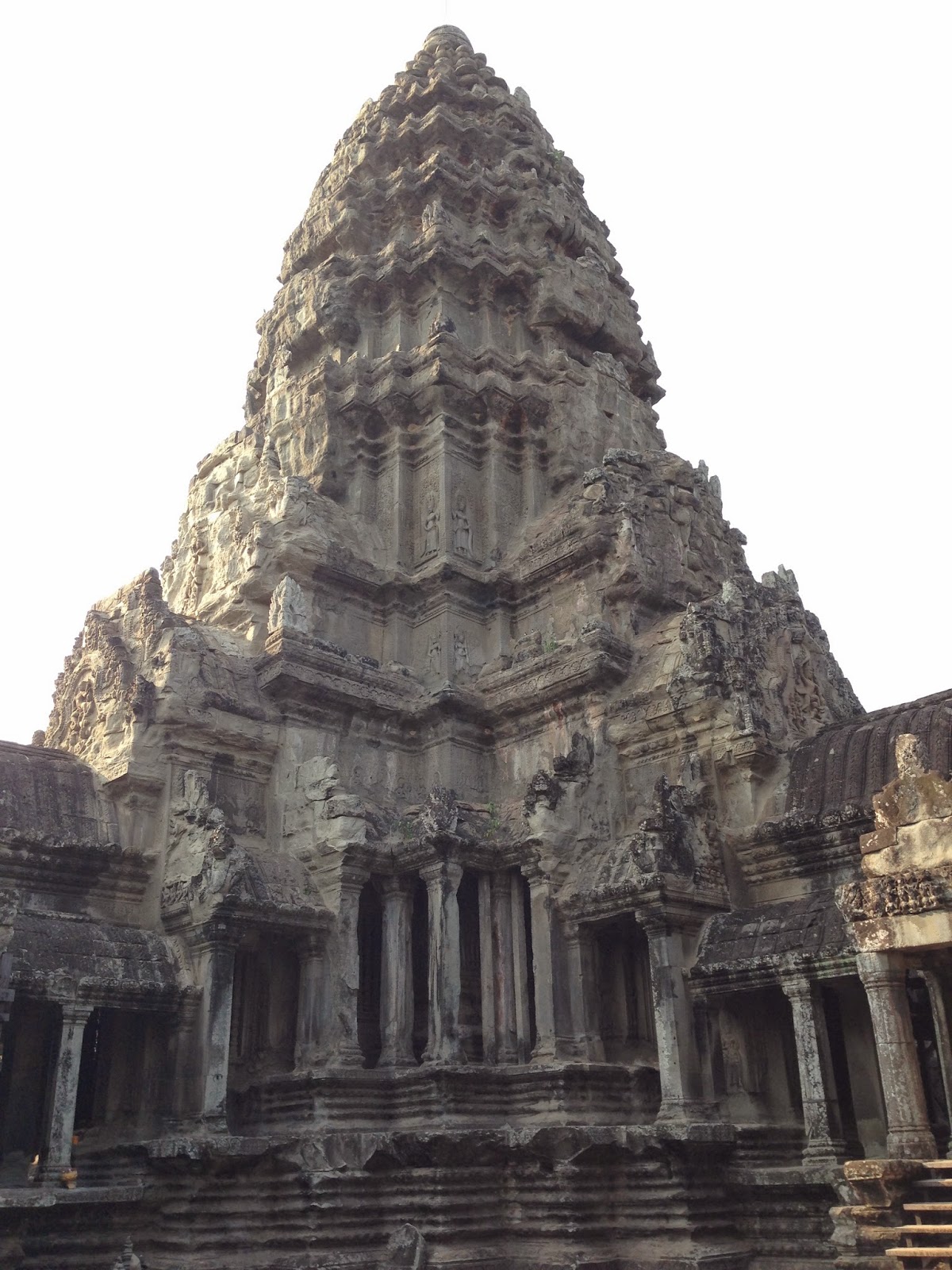 One of the 5 main prasads. 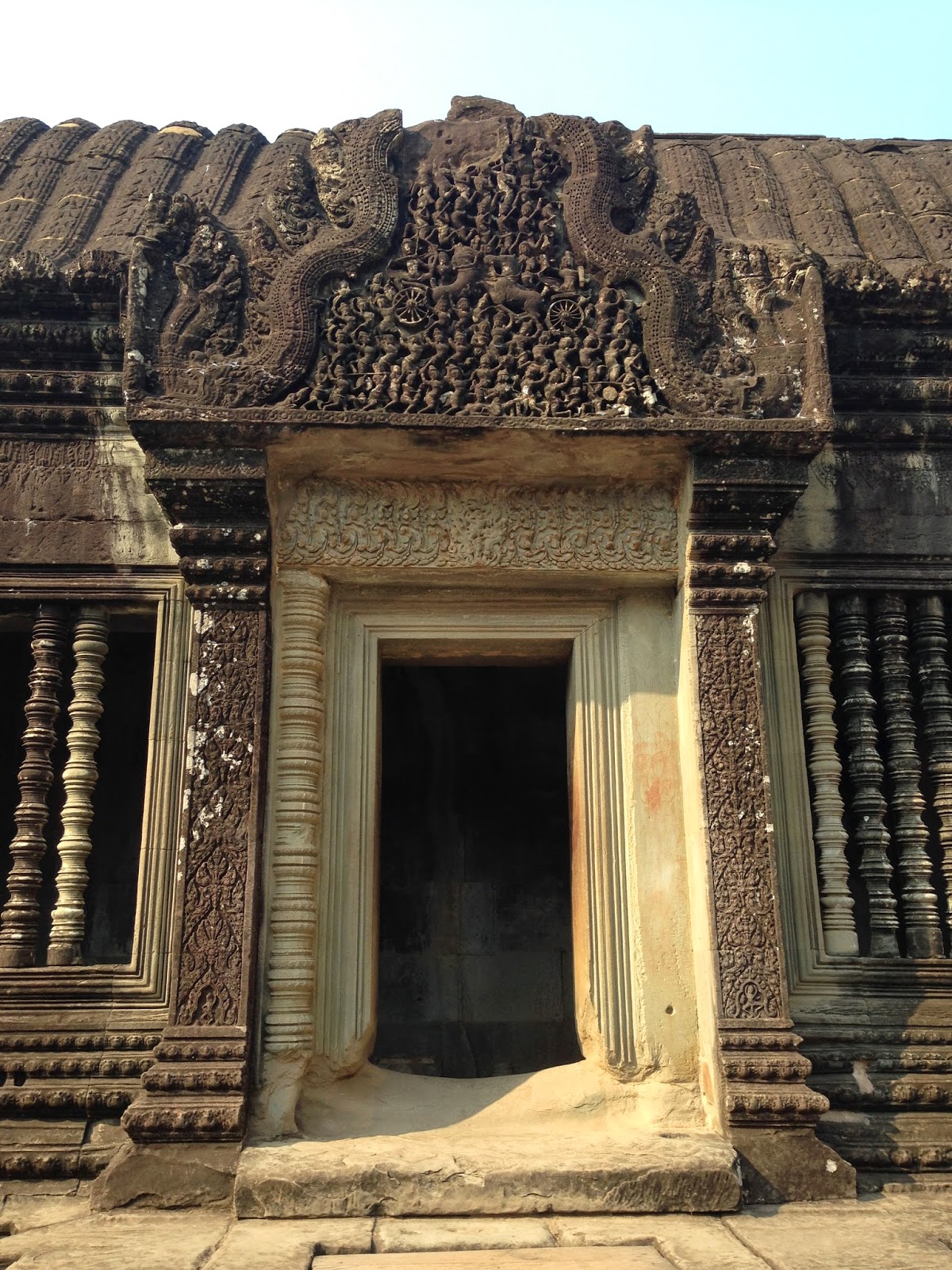 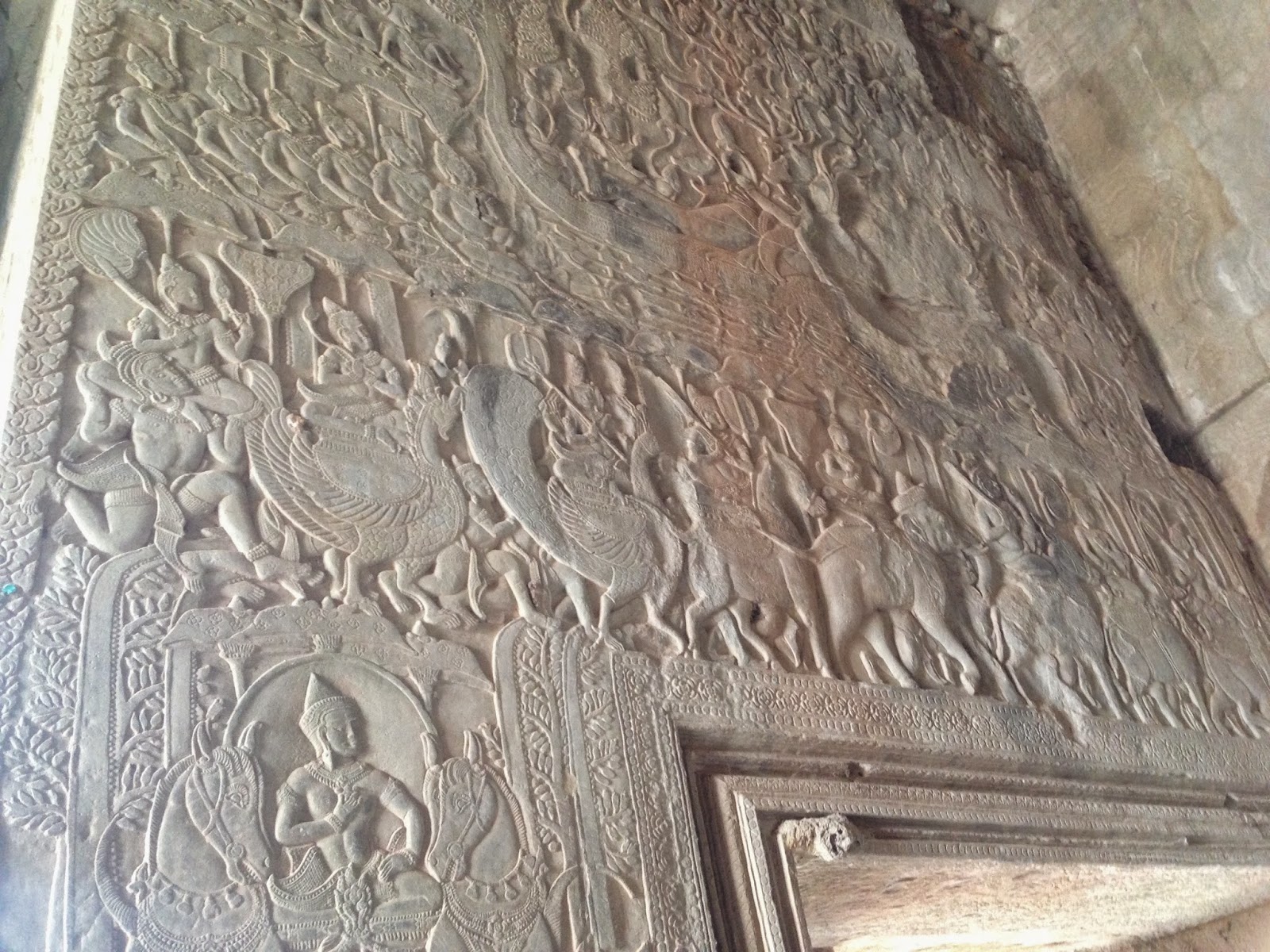 This is just a small portion of the amazingly intricate carvings in the wall which tell parts of the Hindu mythology. 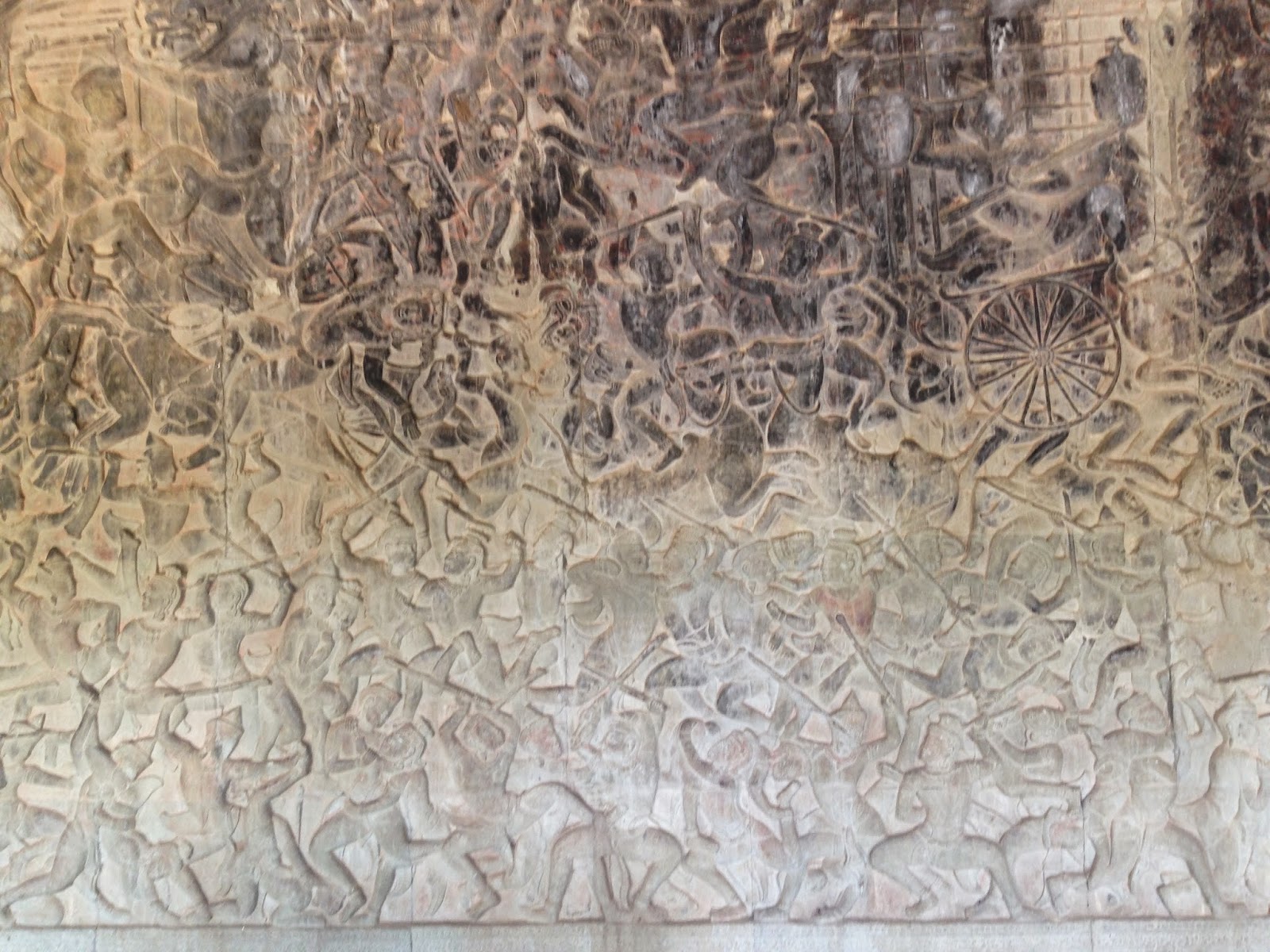 A battle scene. It was difficult for me (iPhone photographer) to capture just how impressive these etchings are.


Angkor Thom:
Angkor Thom means "great city" and was constructed as the capital of Jayavarman VII's empire. There is a high wall and a moat surrounding the 9 square kilometers of the city. 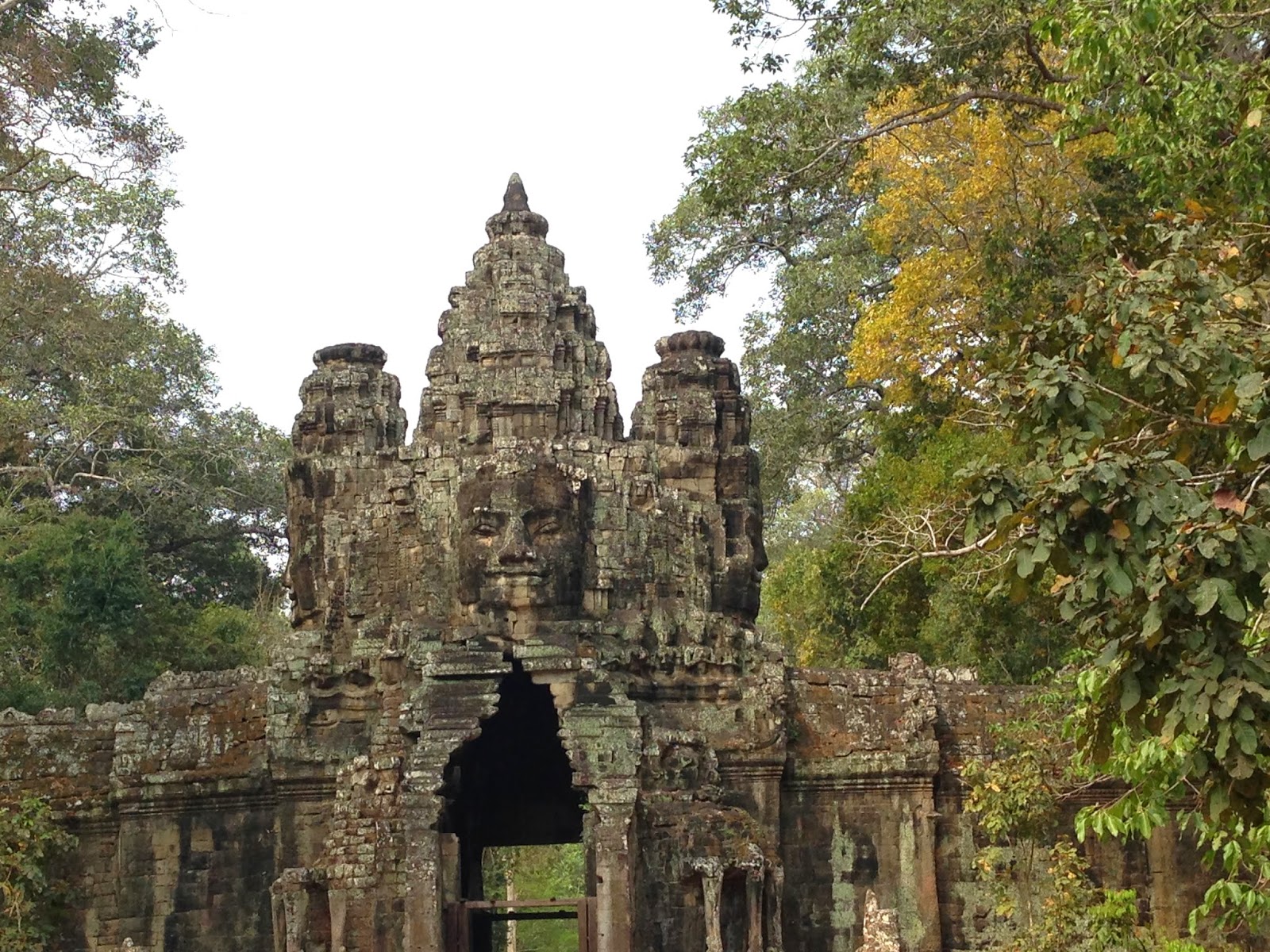 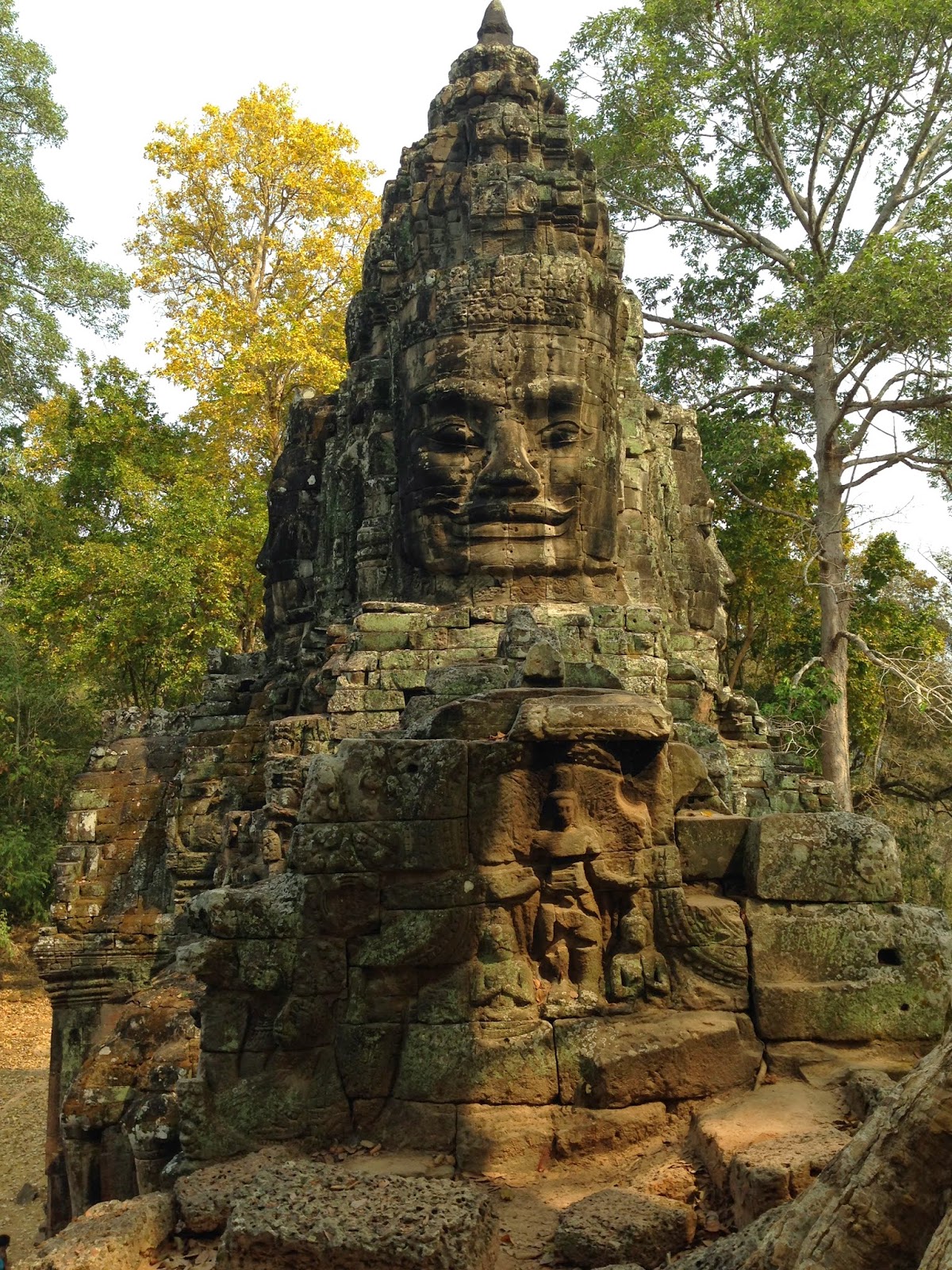 Jayavarman VII used a portrait of his face and the Buddha's combined looking in all four directions at the entrance gates. 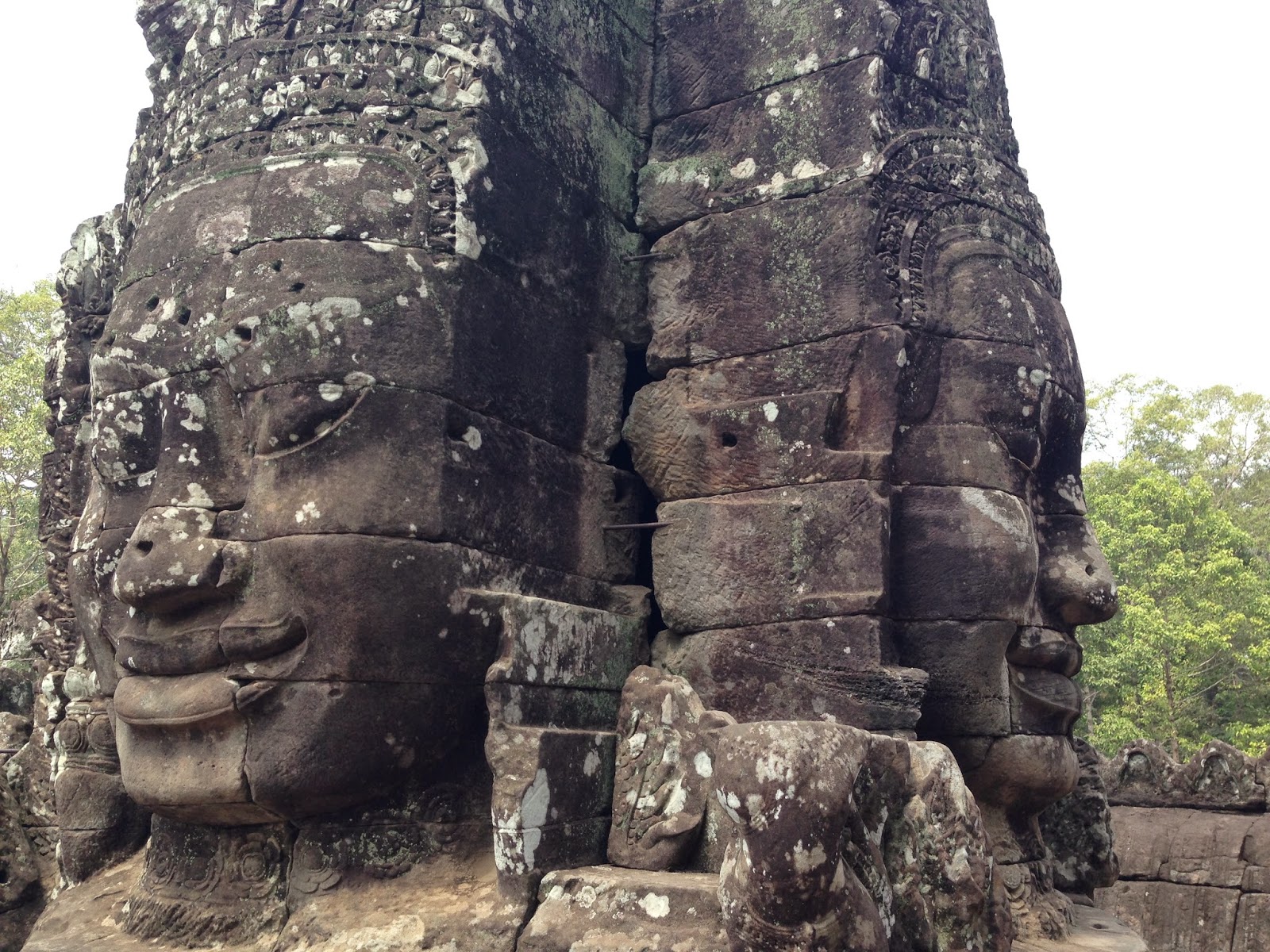 This is not the gate but a close up of the stone faces. These are on towers which were erected to reflect the different 'states' of the empire. Depending on the state of the state the faces are either smiling or look more ambivalent. 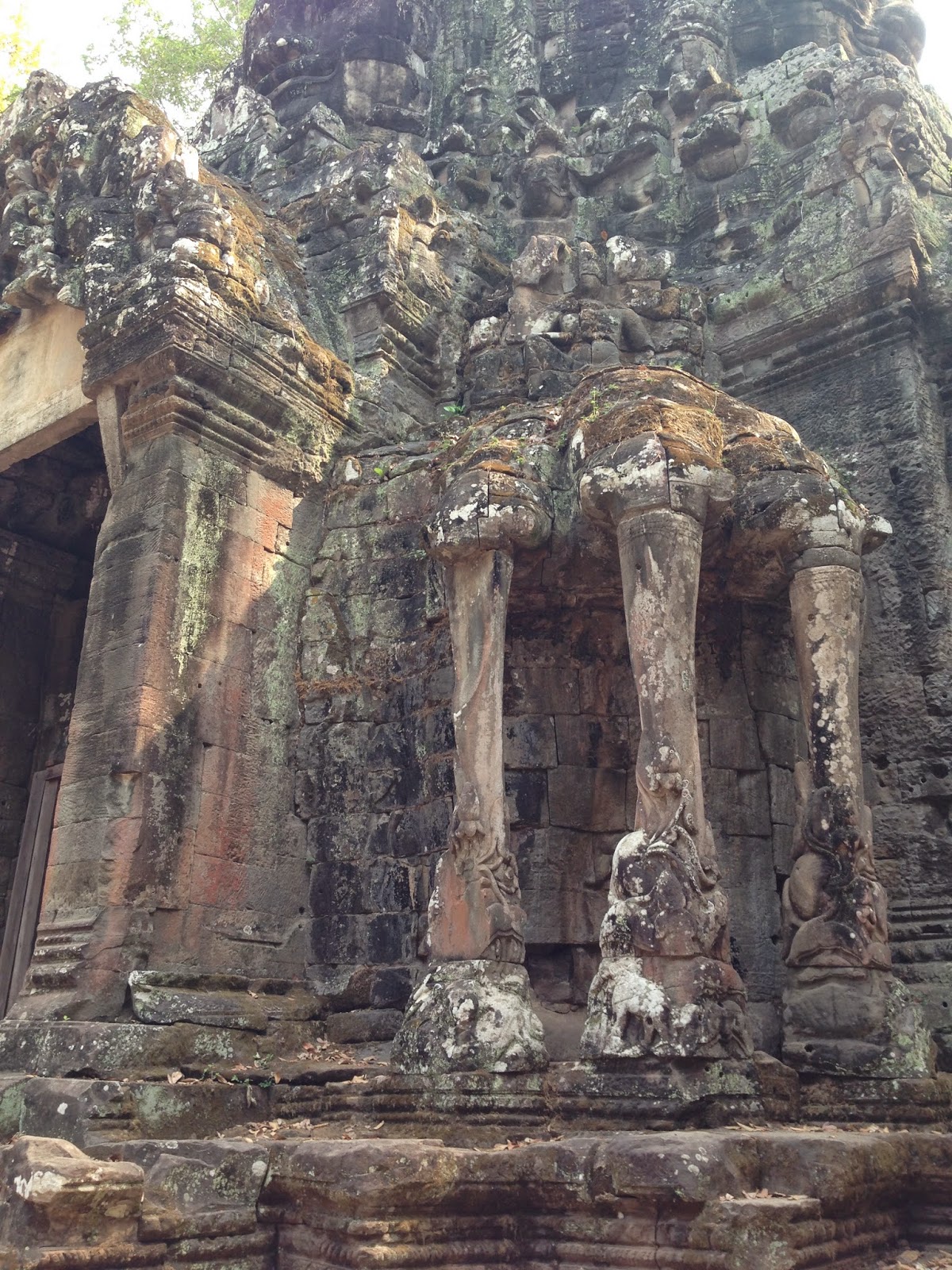 This is a three headed elephant which appears on either side of the gate. 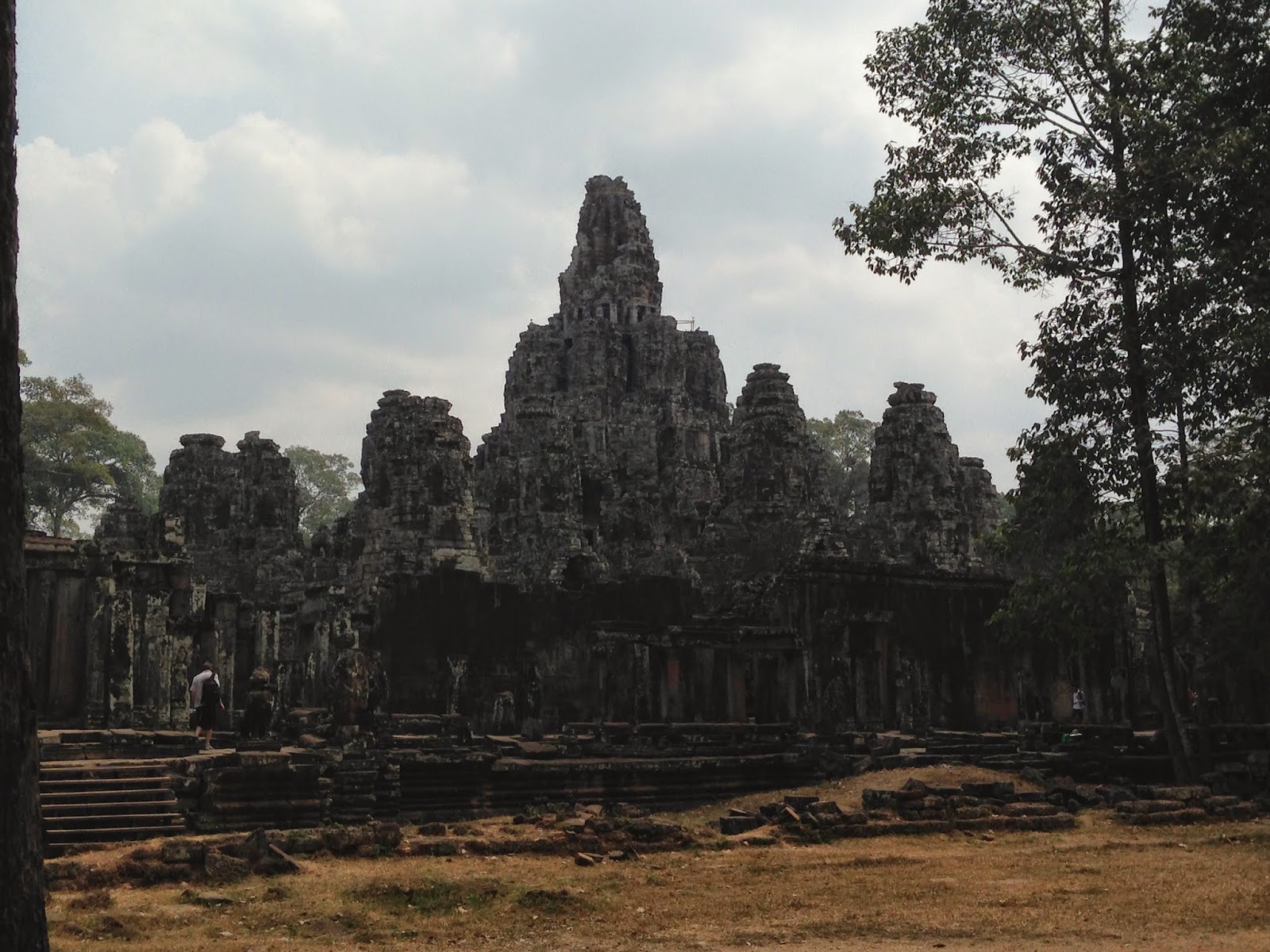 Prasat Bayon. This is the temple which uses the faces as described above. 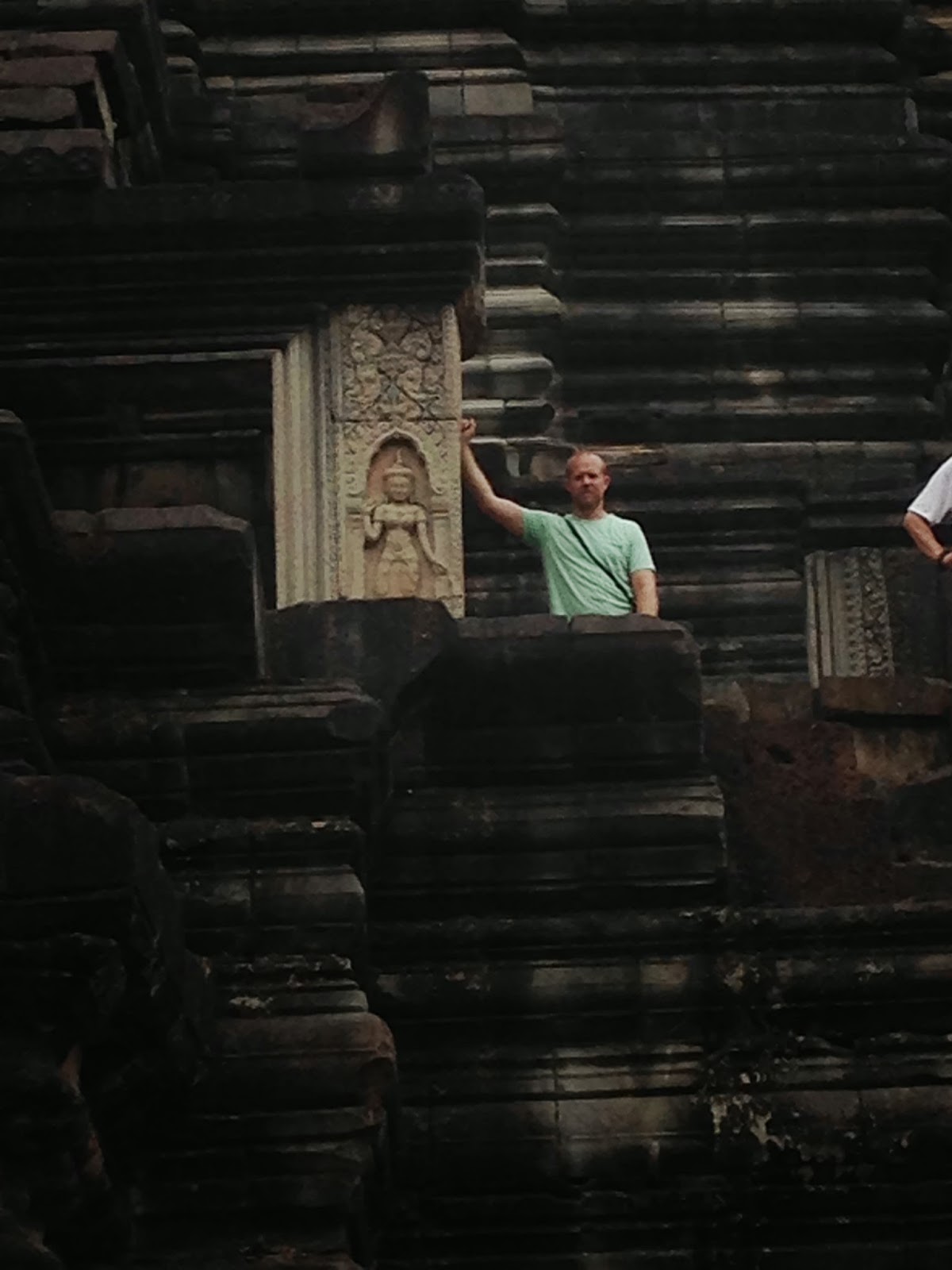 Jared at the middle level of one of the temples. 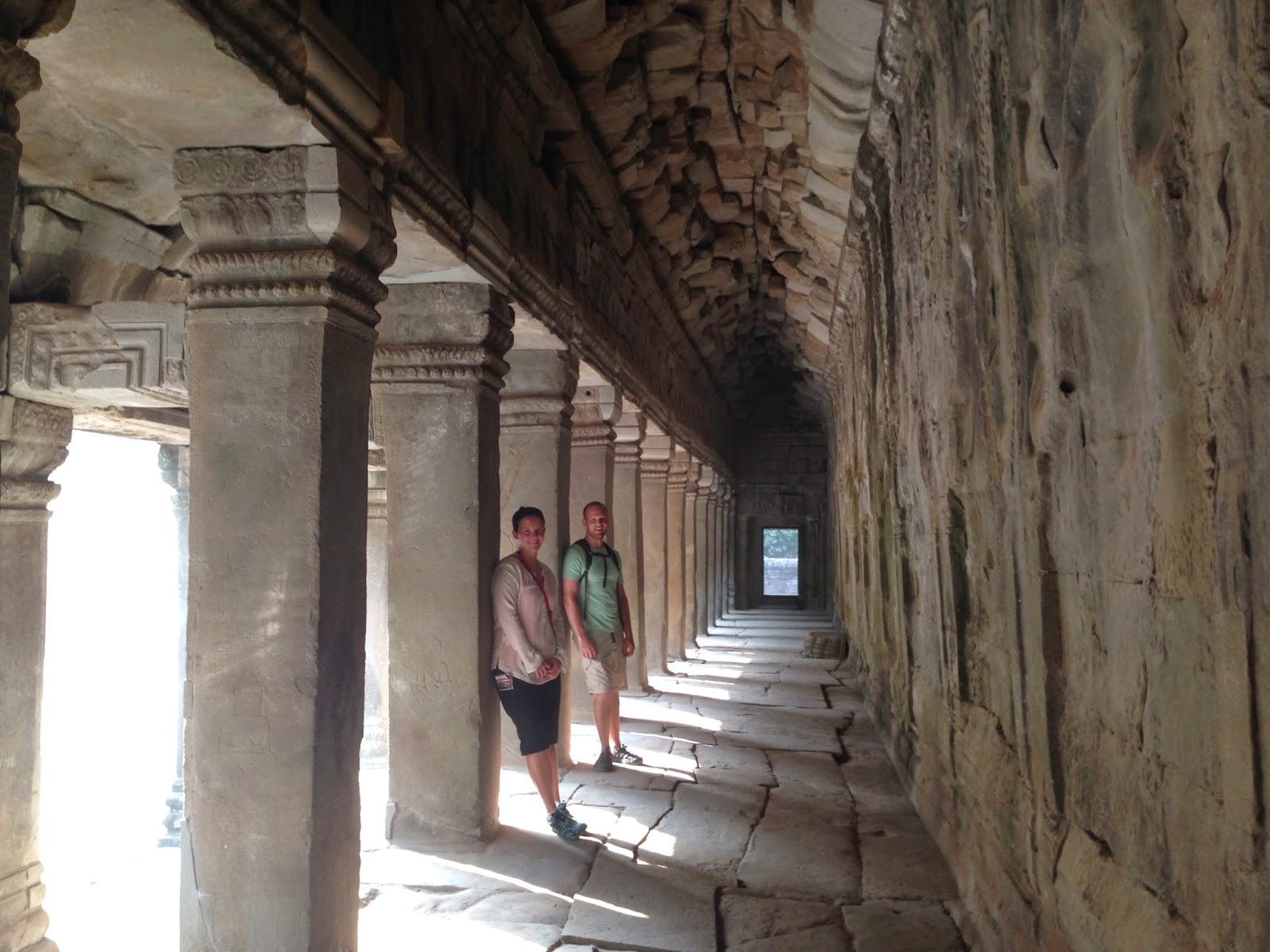 Our guide suggested this fun picture of us leaning on the pillars. 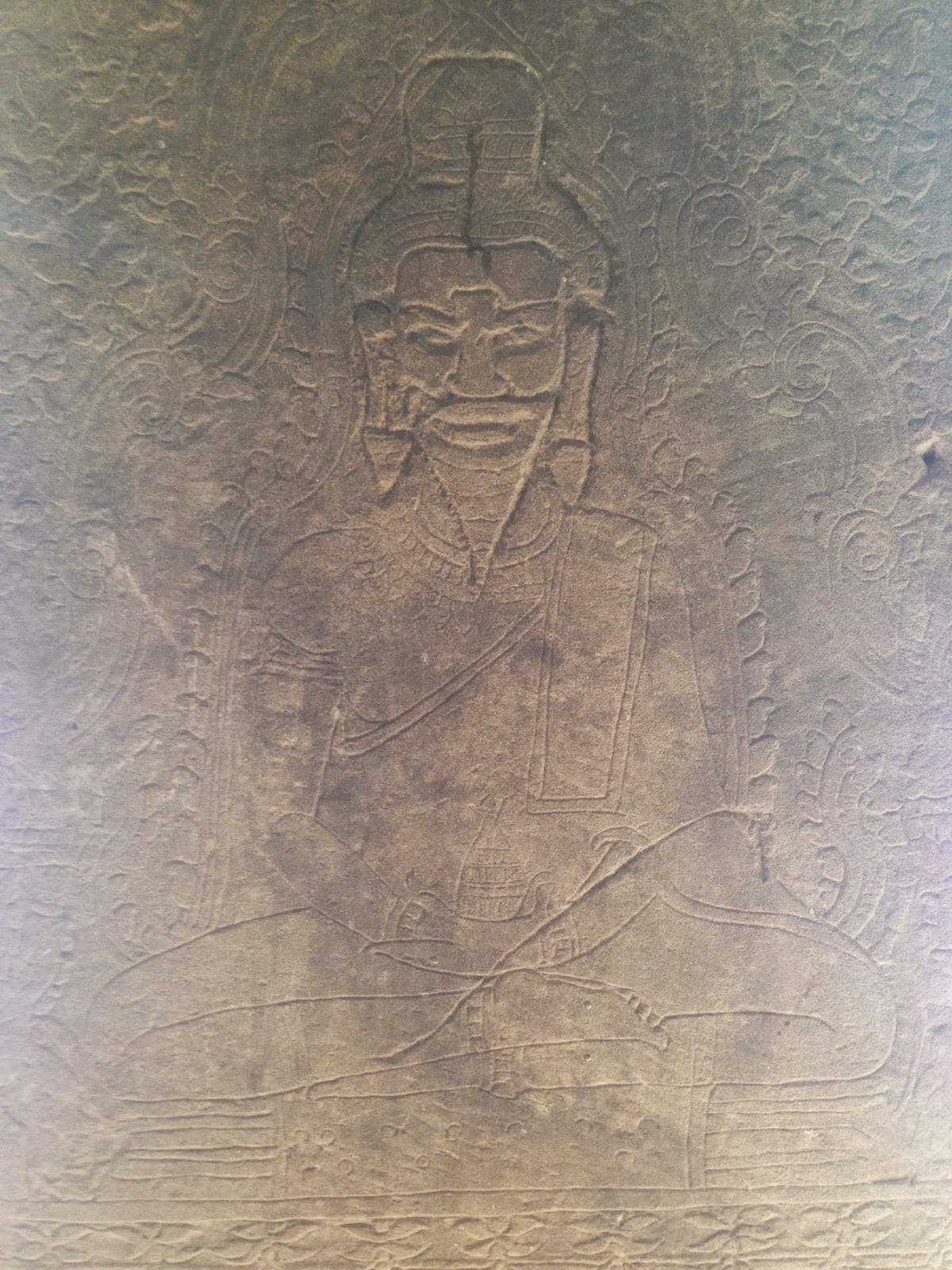 A Buddha carving which was modified to a Hindu theme. Notice the added beard and the beginnings to change the position of the legs from crossed to raised. 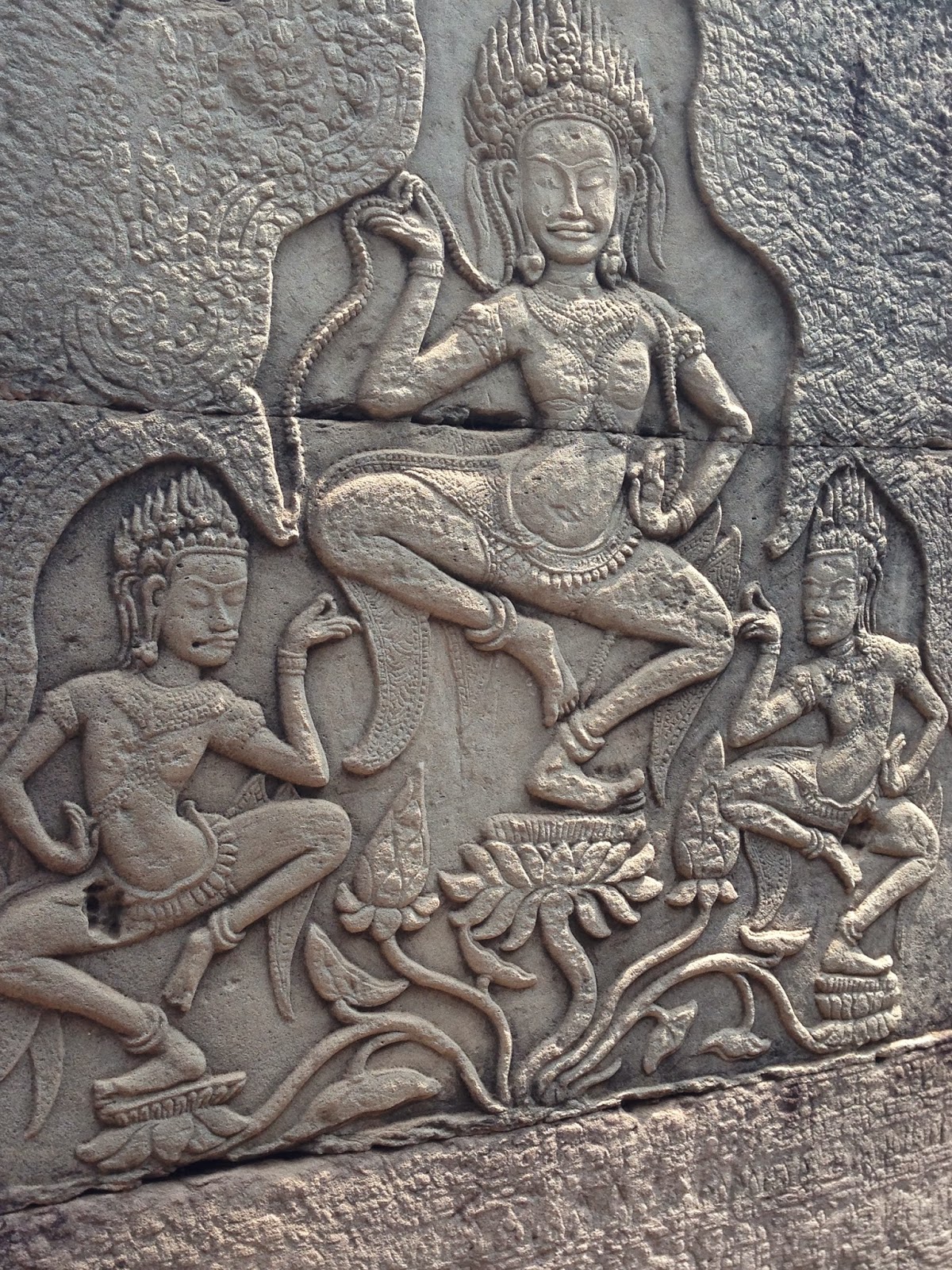 Carvings of the Uppsidaras (the concubines of the King)
If I were to continue to post as many pictures as I have above for the rest of the monuments/temples we visited, this would be a giant post and would most likely get a bit redundant. As such, I am going to post a few from each place and skip the introductions/discussions. If we ever return to Angkor Wat, I believe we have agreed to get a week pass and really take time at each place to look at and understand the architecture and the symbolism. It really is an impressive place and one should allow enough time to ponder the themes and understand the architectural symbolism.
﻿
﻿ 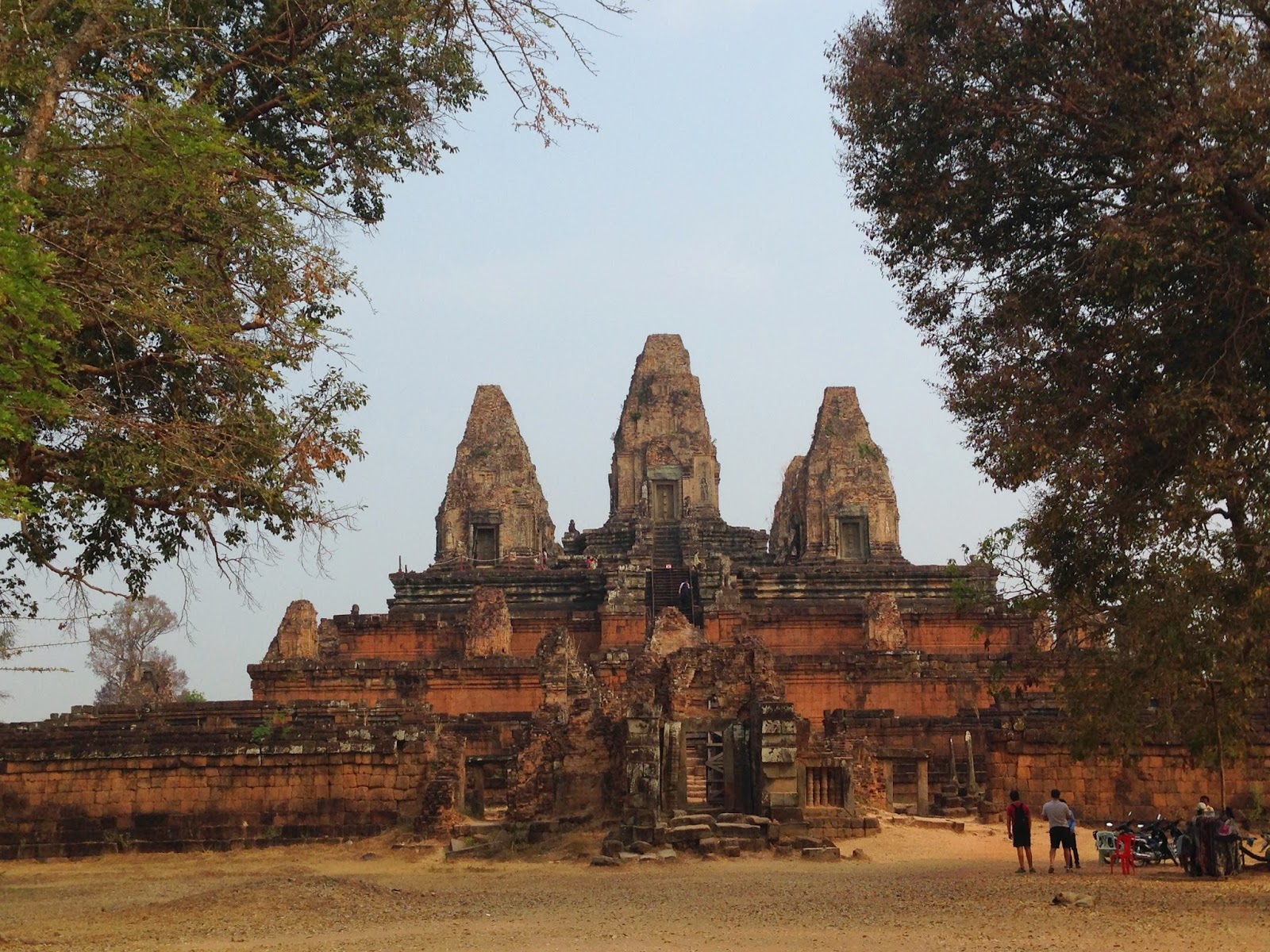 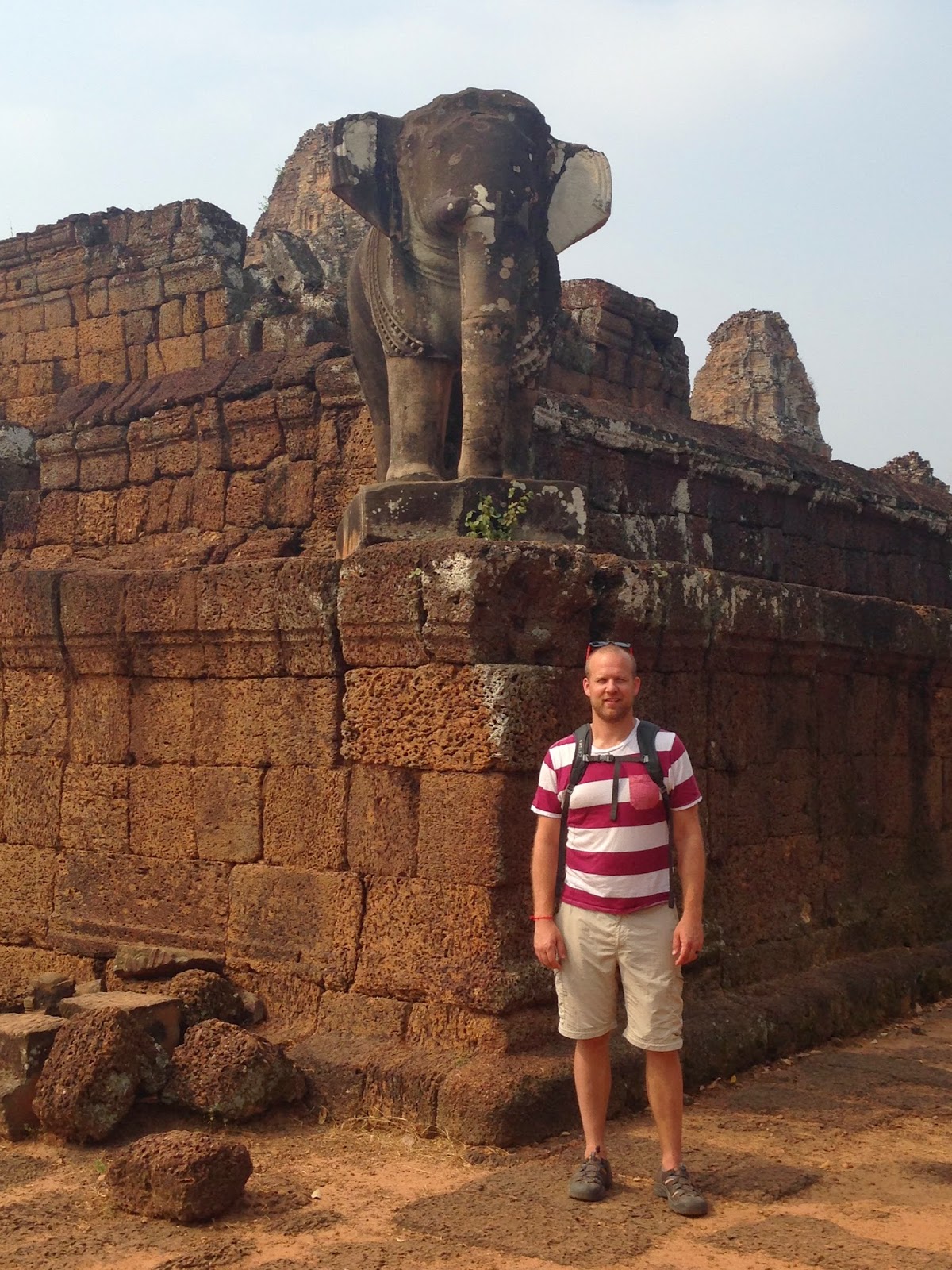 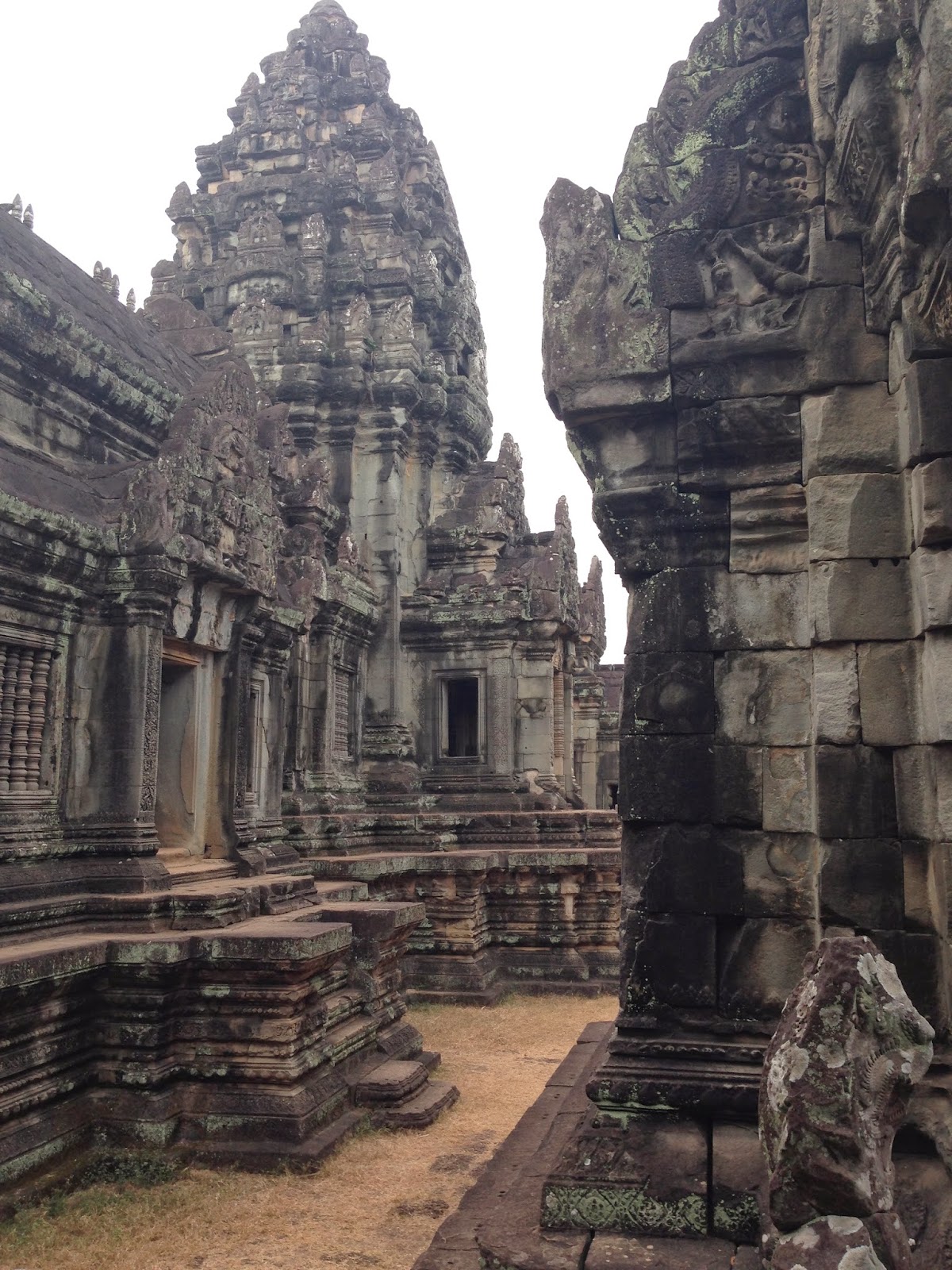 Another tower from Pre Rup 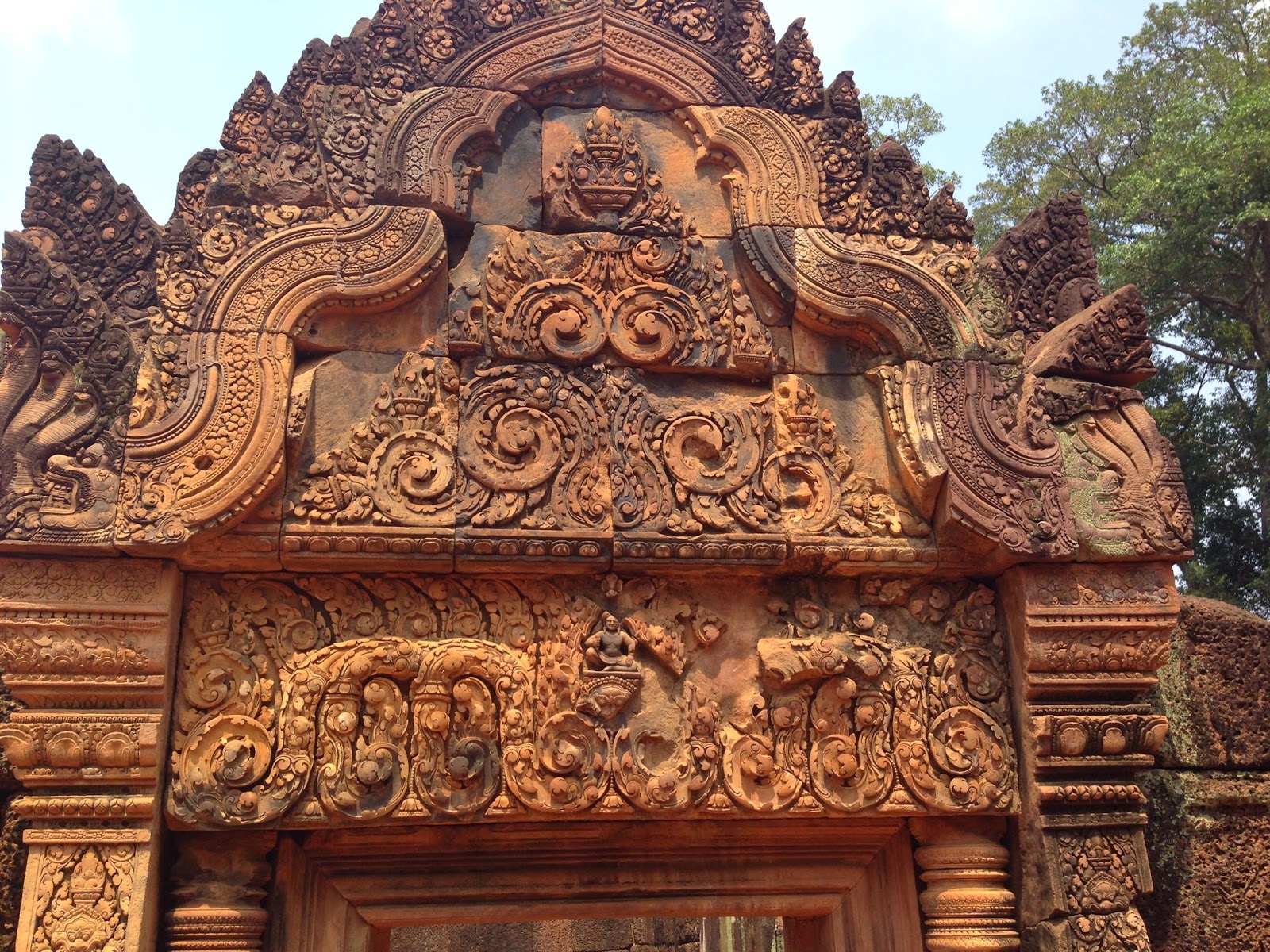 This detailed entry is from Banteay Srei, a temple known for the detailed carving and the red color of the rock. 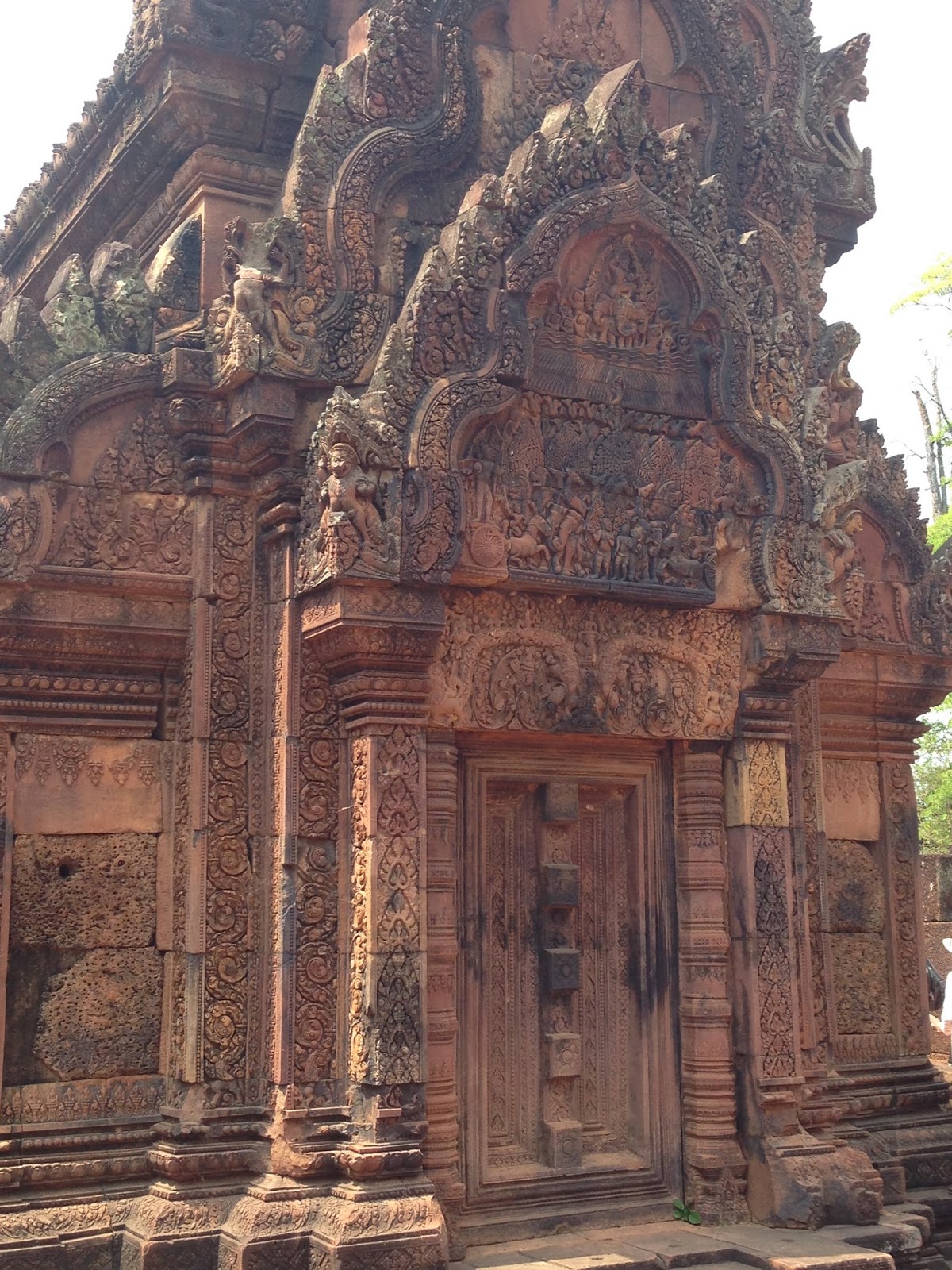 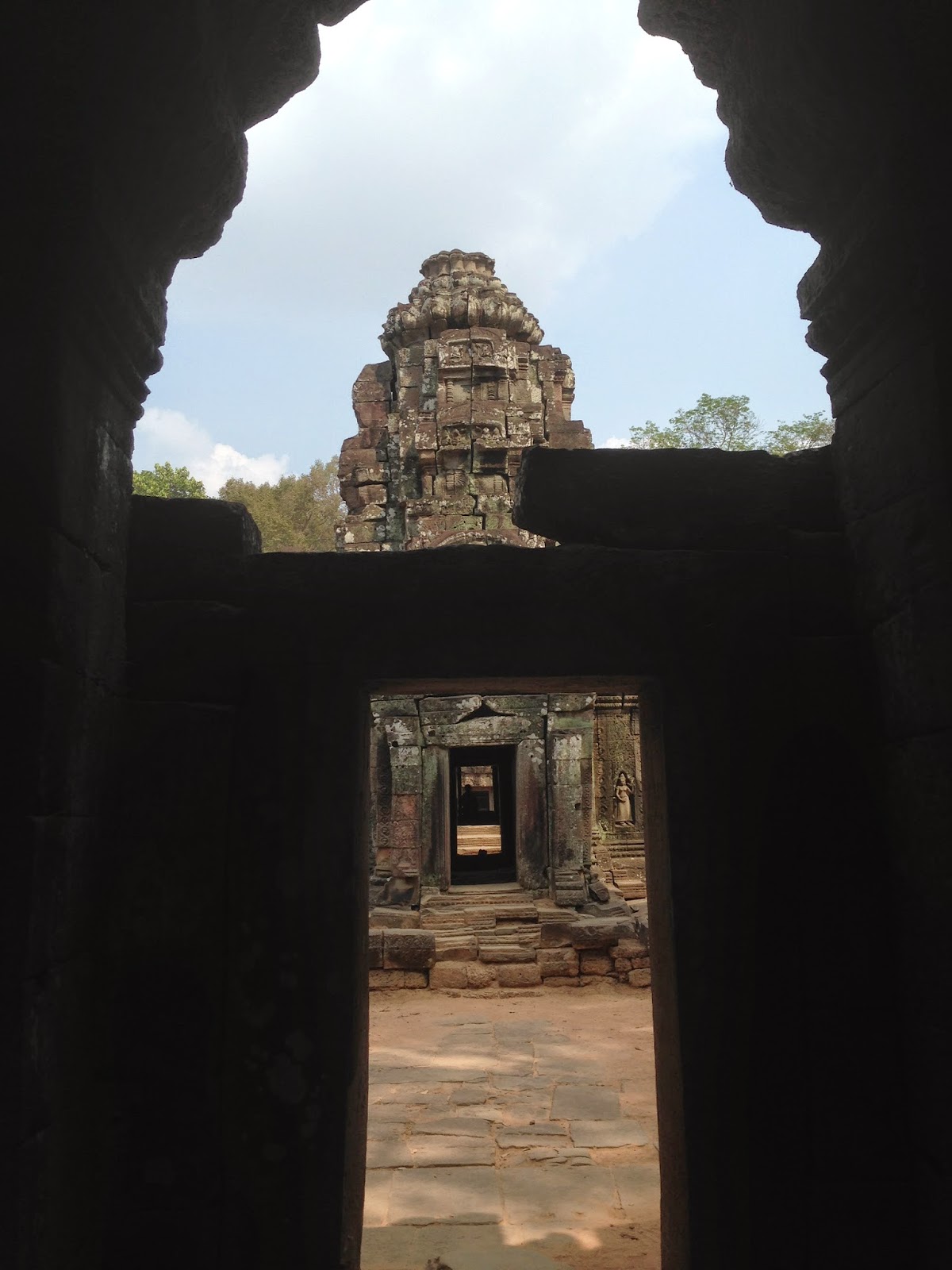 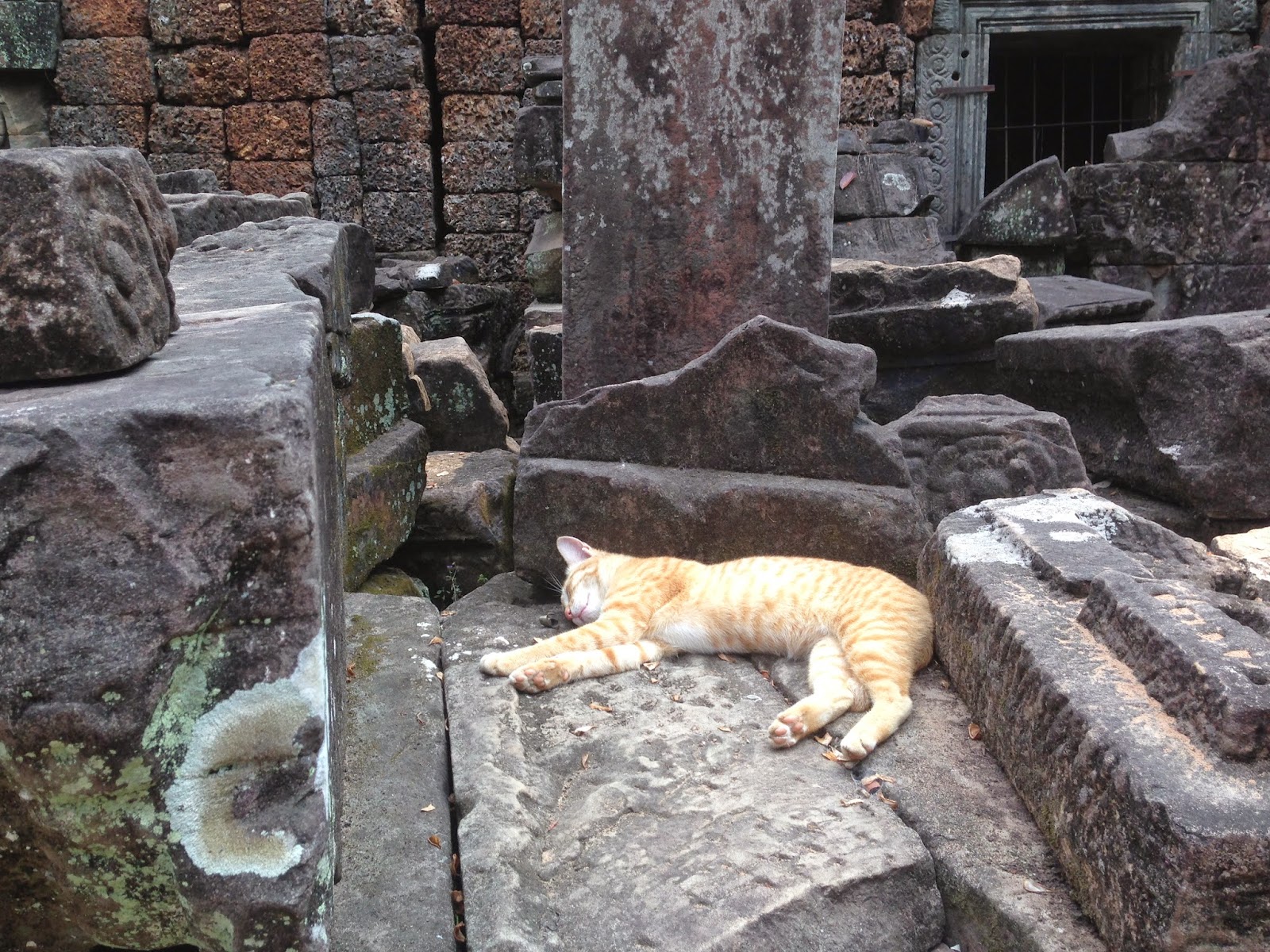 I couldn't resist this napping kitty. 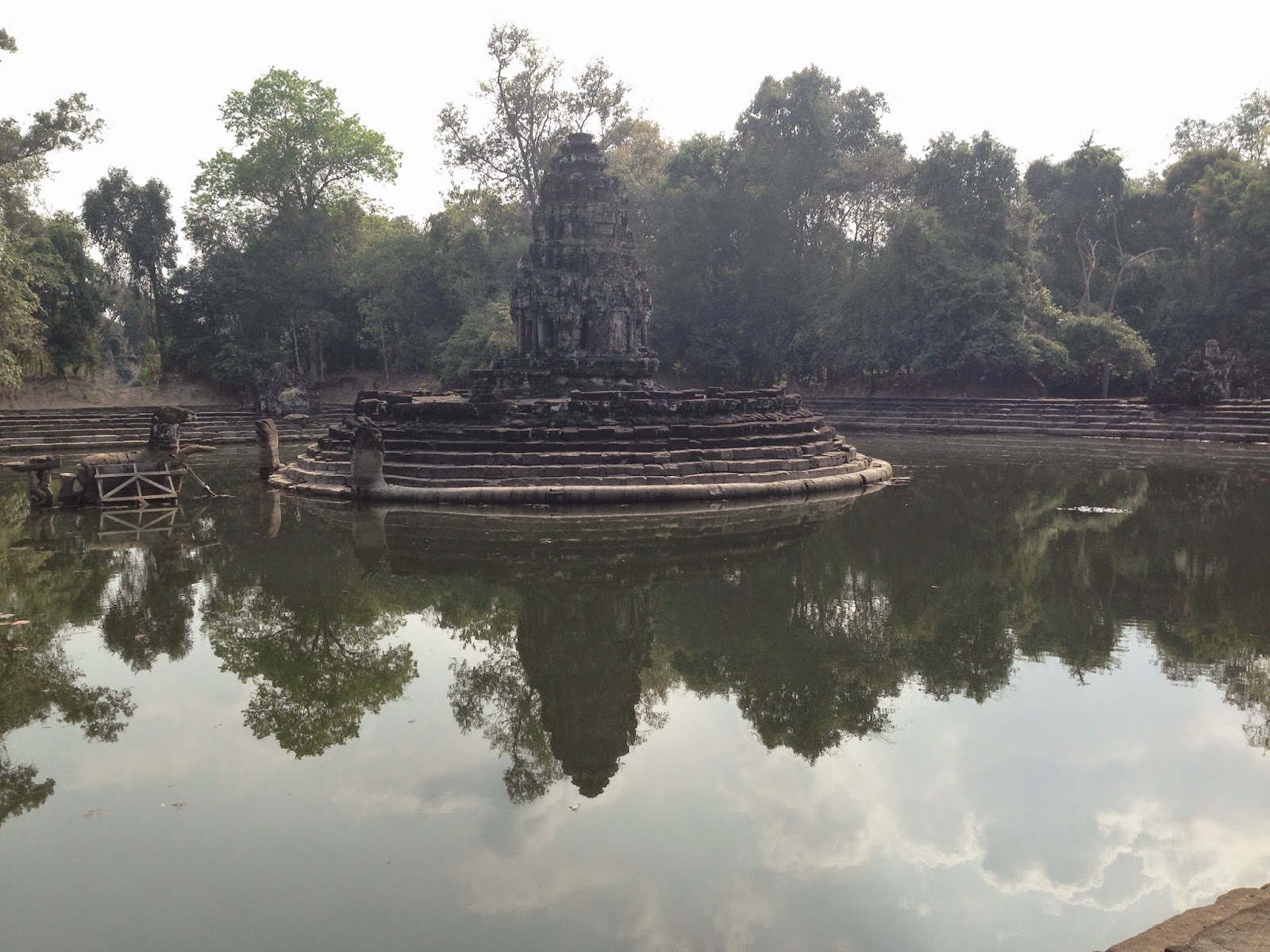 Neak Poan, a temple surrounded by manmade lakes and walkways. If/when it gets restored to what the initial structure looked like it will be unbelievable. 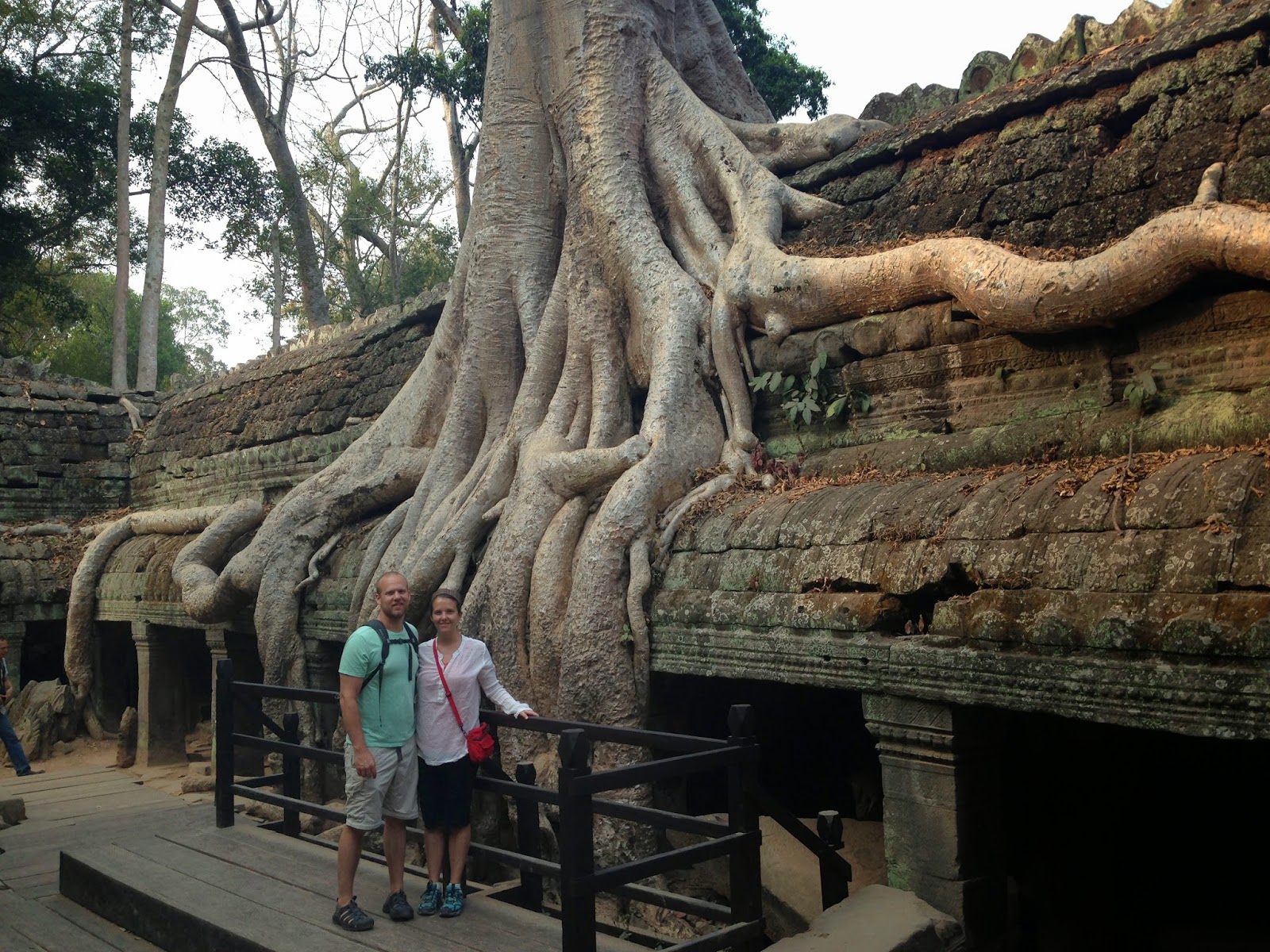 Ta Prohm. This temple has had some damage from these crazy awesome trees (called Spung trees), but most of the destruction was caused by invading forces riding elephants. 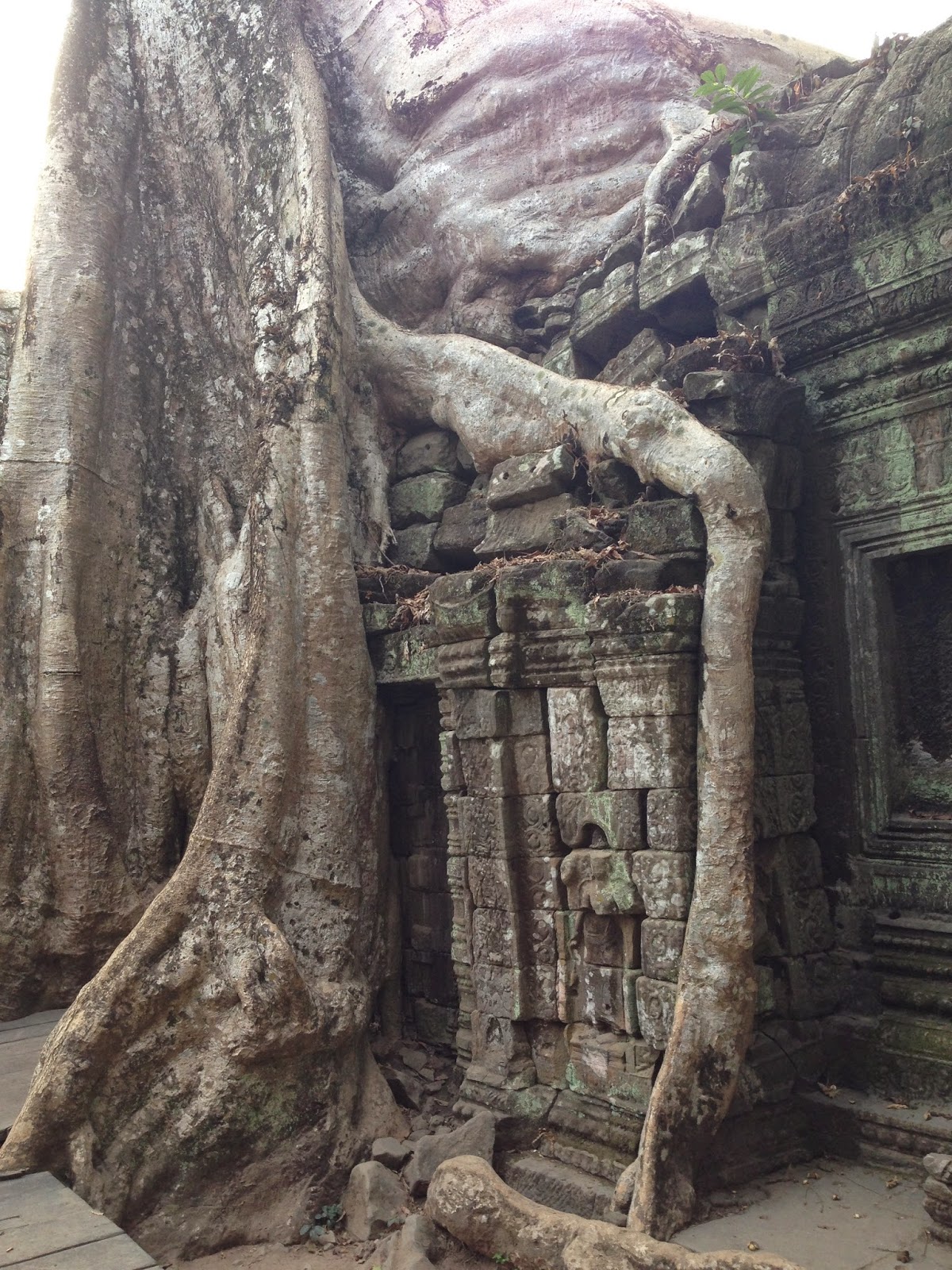 Ta Prohm is where Tomb Raider was filmed (at least parts) it is now on our watch list as well!
Our last picture is unfortunately the only one we have of our awesome tuk-tuk driver, Samnang. He drove us around both days and after the last day invited us to come hang out with his family and friends and have some fish and beer. He was a great guy and we wish all drivers could be more like him!﻿ 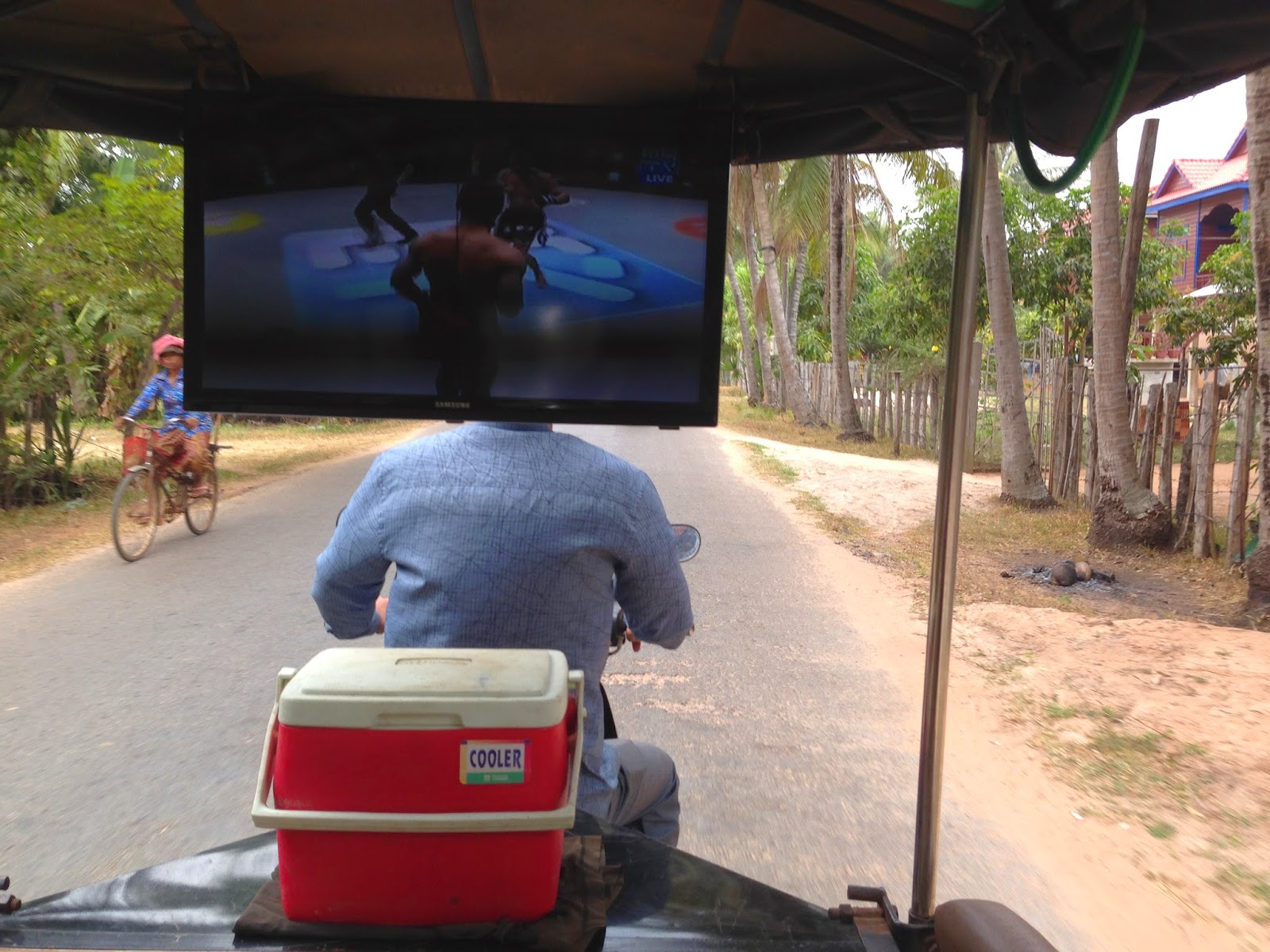 He also had the only tuk-tuk with a t.v. Balla.
We really enjoyed our time in Siam Reap and it is definitely on our 'will return' list! So far, it would be the highest on the 'we recommend everyone to see' list as well. Our next stop was Phnom Penh and Jared is writing that post because I, unfortunately, came down with more stomach issues on day two in the city.﻿
Posted by Christy at 5:57 AM