I would like to start this post with a revision to the Mumbai post. Apparently my tone was, shall we say, whiney in my description of the train. It really wasn’t that bad, I think when I wrote the post I was still remembering standing (because there were no seats) on a platform with beggars and stray dogs and a stale stench of urine hanging in the air. That was every train station in India though so there was nothing that made this one particularly bad. And, no one likes being hungry but this hunger was not deserving of the anger with which I wrote about it. Really, I just wanted to use my ‘m’ alliteration for Mumbai, muy and mal.

On to Udaipur: Our flight was, interesting. Well, not the flight itself so much as the pre-flight experience. The Mumbai airport has a set up where you can electronically check in at a kiosk and then stand in line to check your bag (if you have a bag to check). Alternatively, if you cannot check in at the kiosk you have to stand in a separate check in line and then stand in the check your bag line. This concept presented as difficult for some passengers. The confusion was rampant. That combined with the fact that lines are just loose suggestions to most Indians can make any socially rule-centered Westerner a little loco. Once we finally made it to the front of the line, we got our boarding passes and then proceeded to the typical security line. No one told us that part of the security process is a mandatory tag for your hand baggage. As such, we had to go back to the check in area, get tags and then get back in the security line. Men and women have separate security lines which usually means that I am through the line quicker than Jared. As I waited for him on the other side I saw him get stopped by the security men. What could this be? Swiss. Army. Knife. Doh. We had forgotten to ensure the contraption was not in the carry-on bag. Cut to the staff using walkie talkies and calling our names over the loud speakers because we were the only passengers not ready for boarding. Well, that was exciting. Although we made the flight (if by the skin of our teeth), our last minute checked bag did not make the flight. Luckily, it did make it on the same flight the following day and it was delivered to our hotel.


Udaipur is an enchanting city. It is considered the Venice of India and although it does not come close to equaling the number of canals, it does have some winding back streets and alleys that could easily result in a lost and confused tourist.  Luckily, we managed just fine and did not get lost. The first day, we visited the city palace, the Monsoon Palace (one of the locations used for filming James Bond’s Octupussy) and we went to a cultural dance show. It was raining that night and we ran to a restaurant to take cover and eat. We happened to meet a fellow Canadian traveler there. He was in his ‘60’s and traveling solo. He had some interesting stories and we passed some hours talking to him about his life of travel. 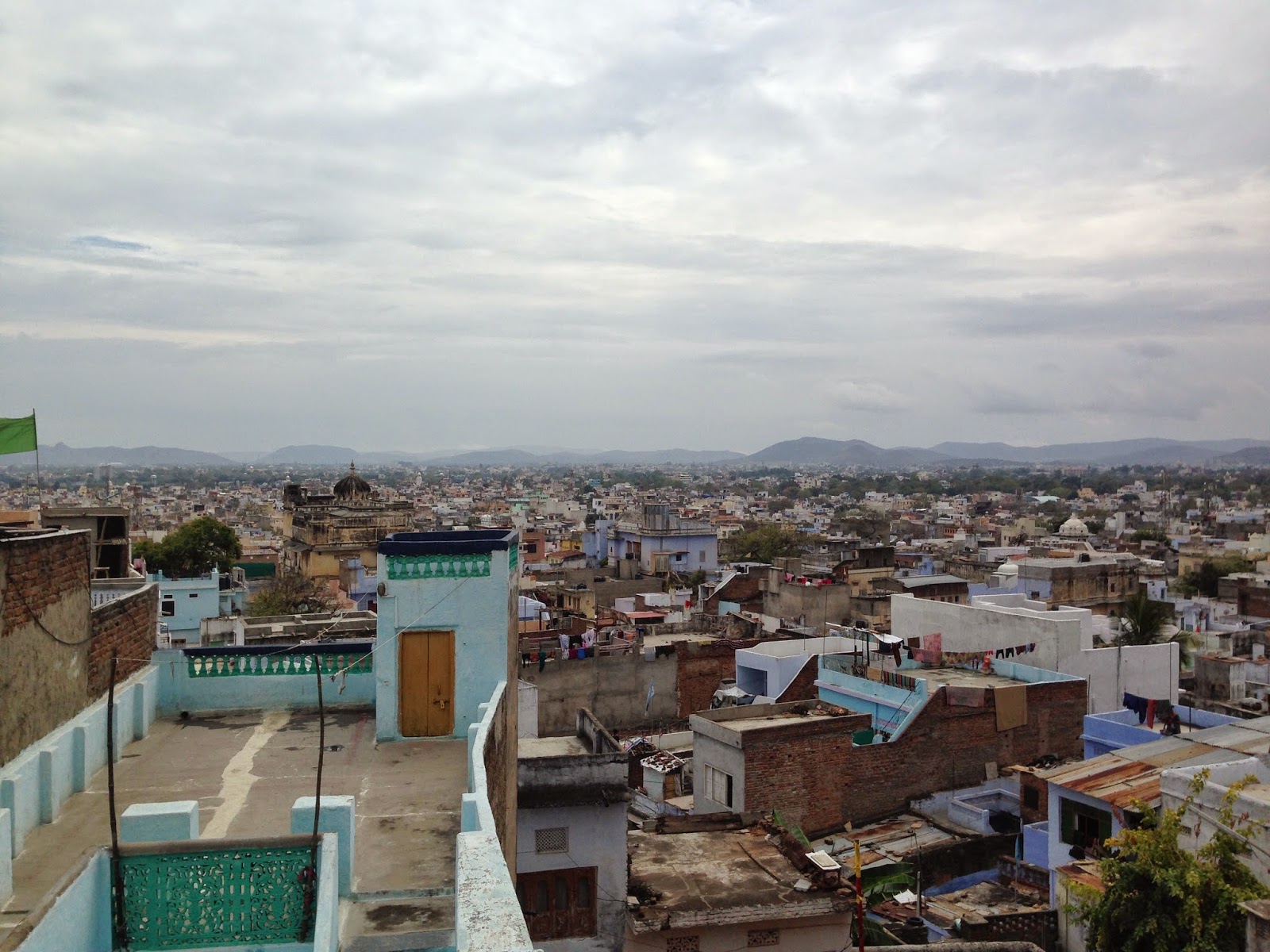 The view of our city from the roof of our hostel. 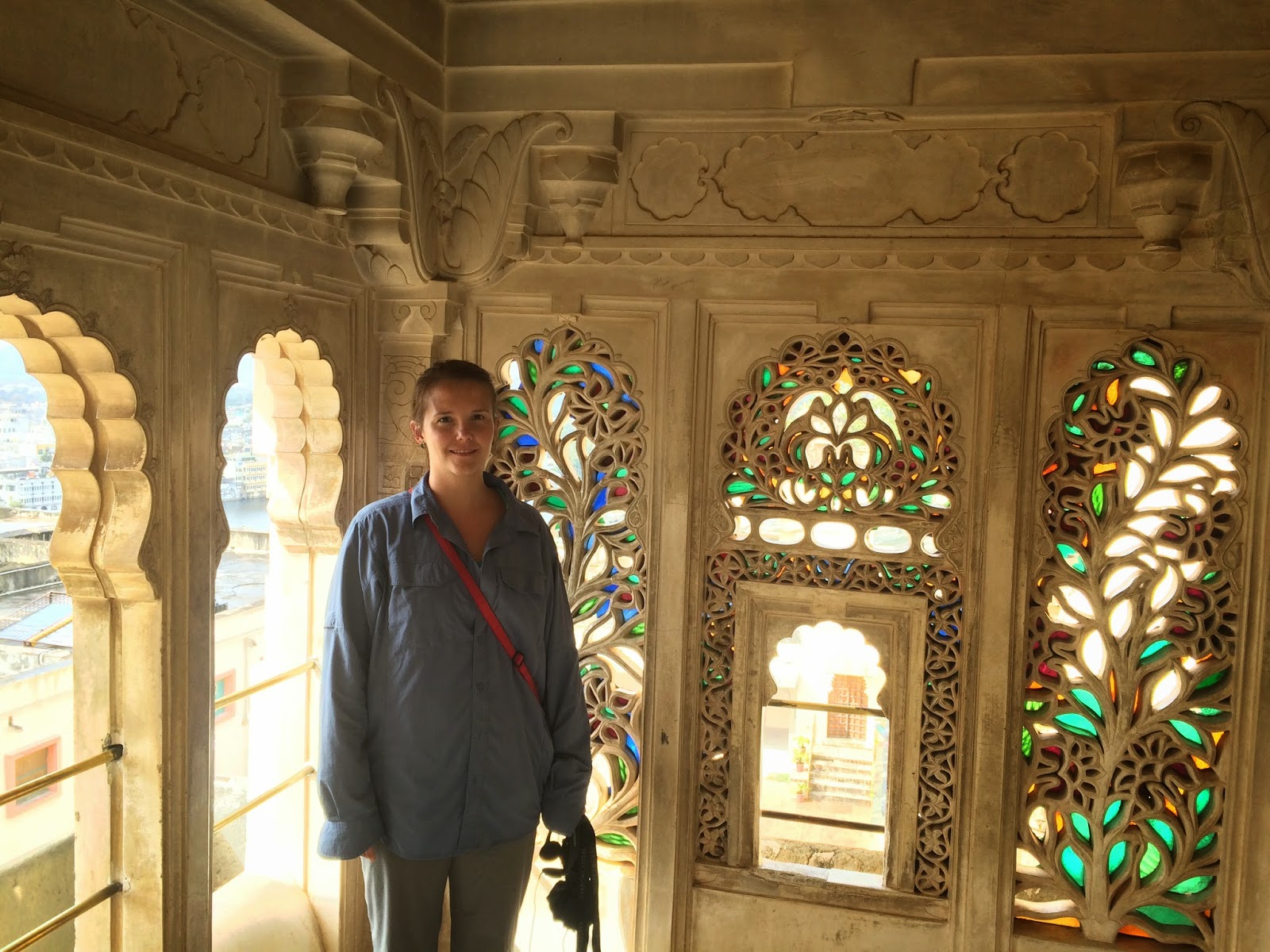 Stained glass in the city palace (I had to wear Jared's shirt because I was cold!) 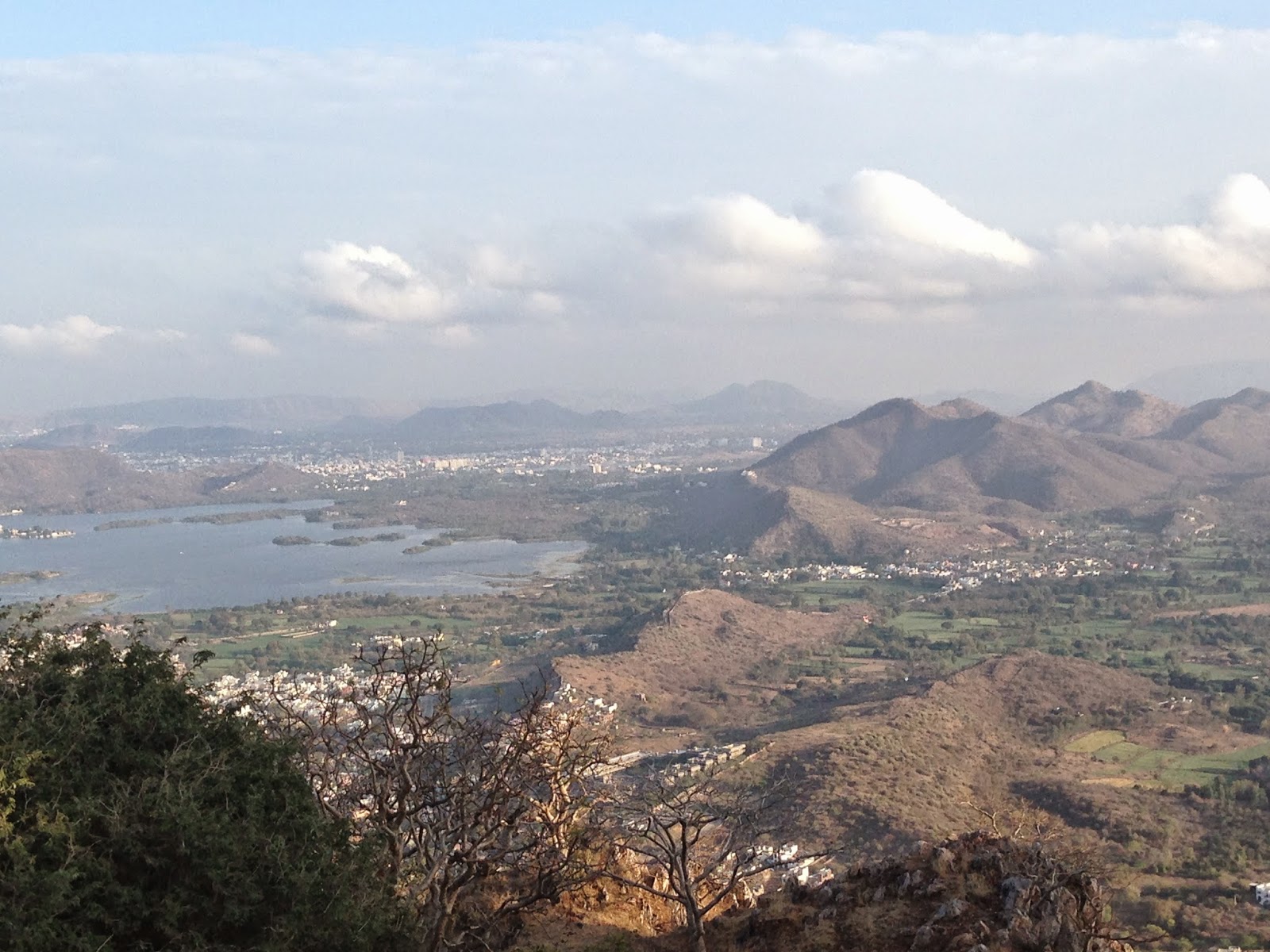 View of the mountains from the Monsoon Palace 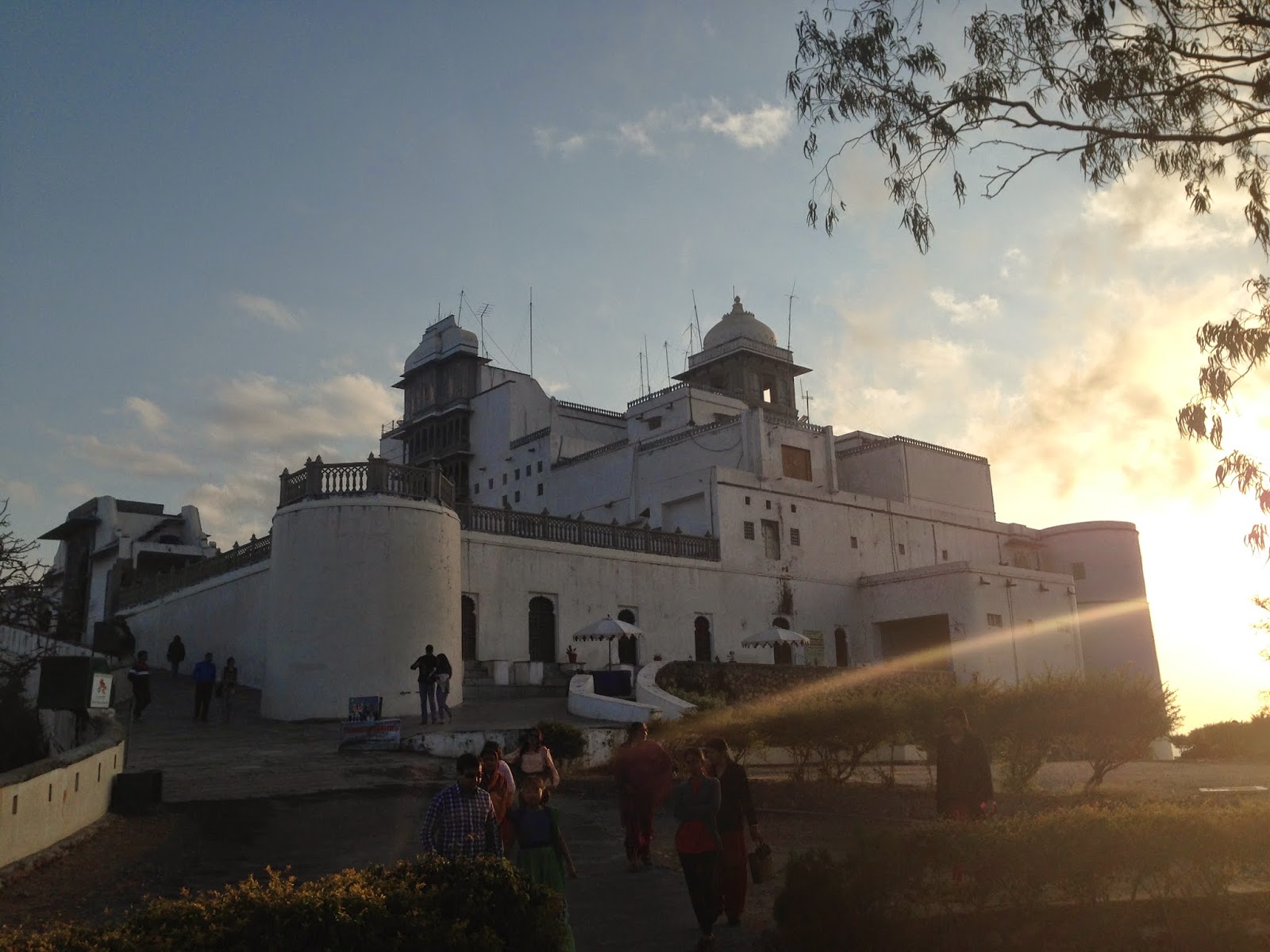 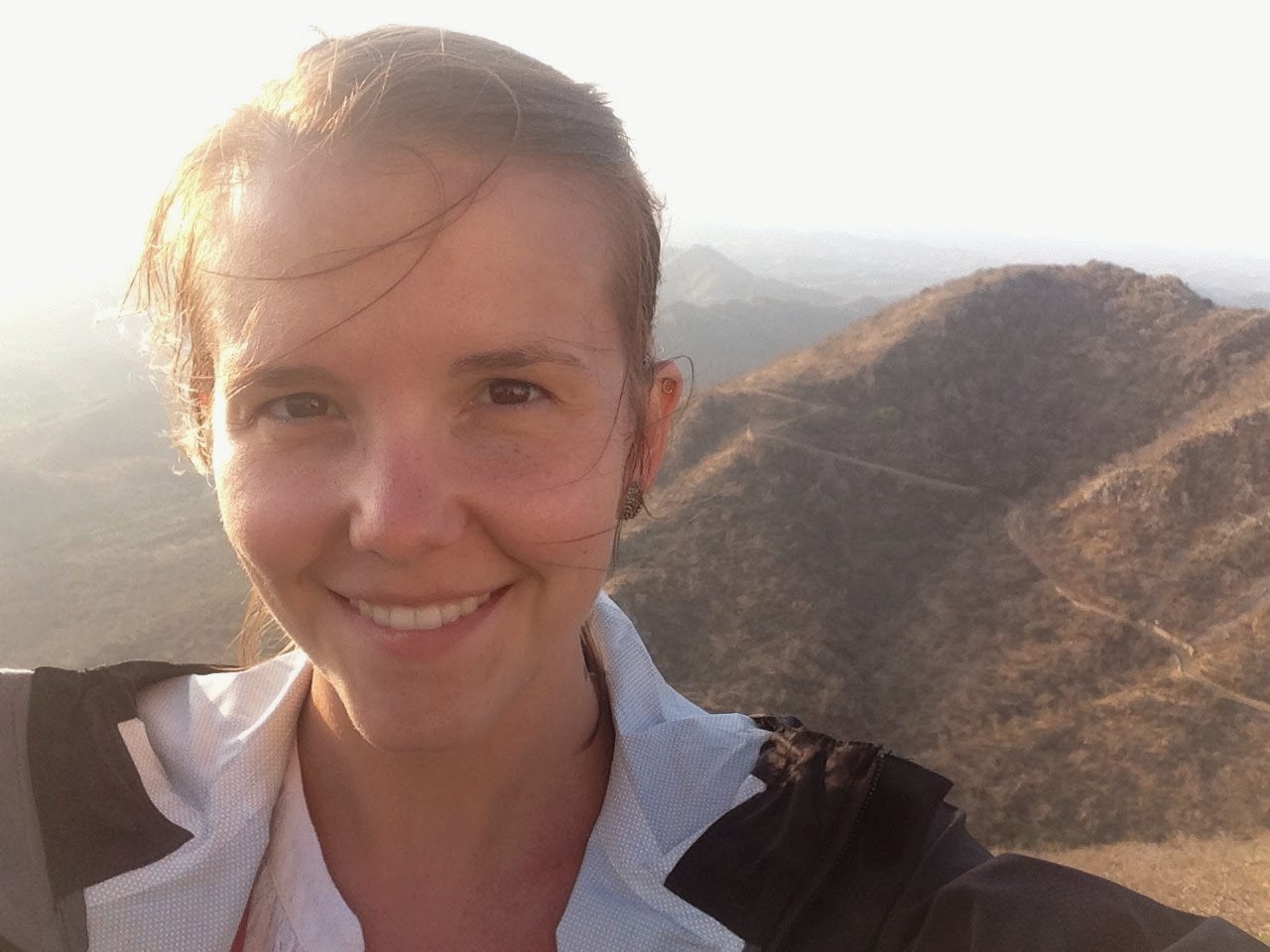 But first, let me take a selfie.


The second day we booked a car through our hotel and went to Kumbal Garh Fort and Ranakpur, a newly restored Jain temple. This was a momentous day. This was the day that I decided I want a fort. Not one made of sheets but a fort as in a fortress. Basically, it is a castle but I think fort sounds cooler and more impenetrable. This particular fort is surrounded by the second longest wall in the world (second to the great wall) and has several different temples on the grounds. A few people still live within the walls but not in or near the actual fort. This was one of my favorite places we have been so far. The Jain temple is intricately detailed with extensive carvings and statues. Some of my favorite details were the designs on the ceiling and all of the pillars which were each unique in their design. 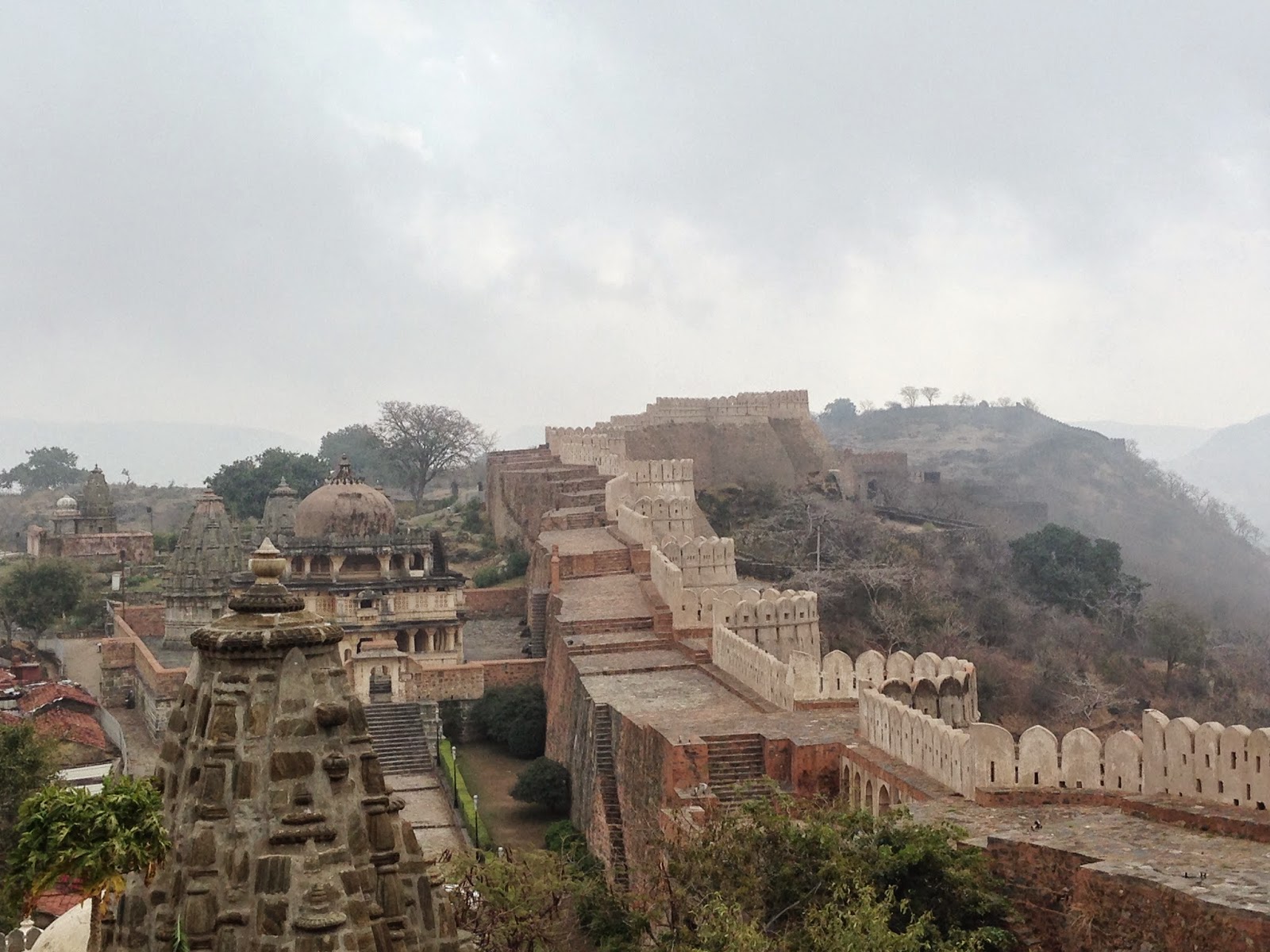 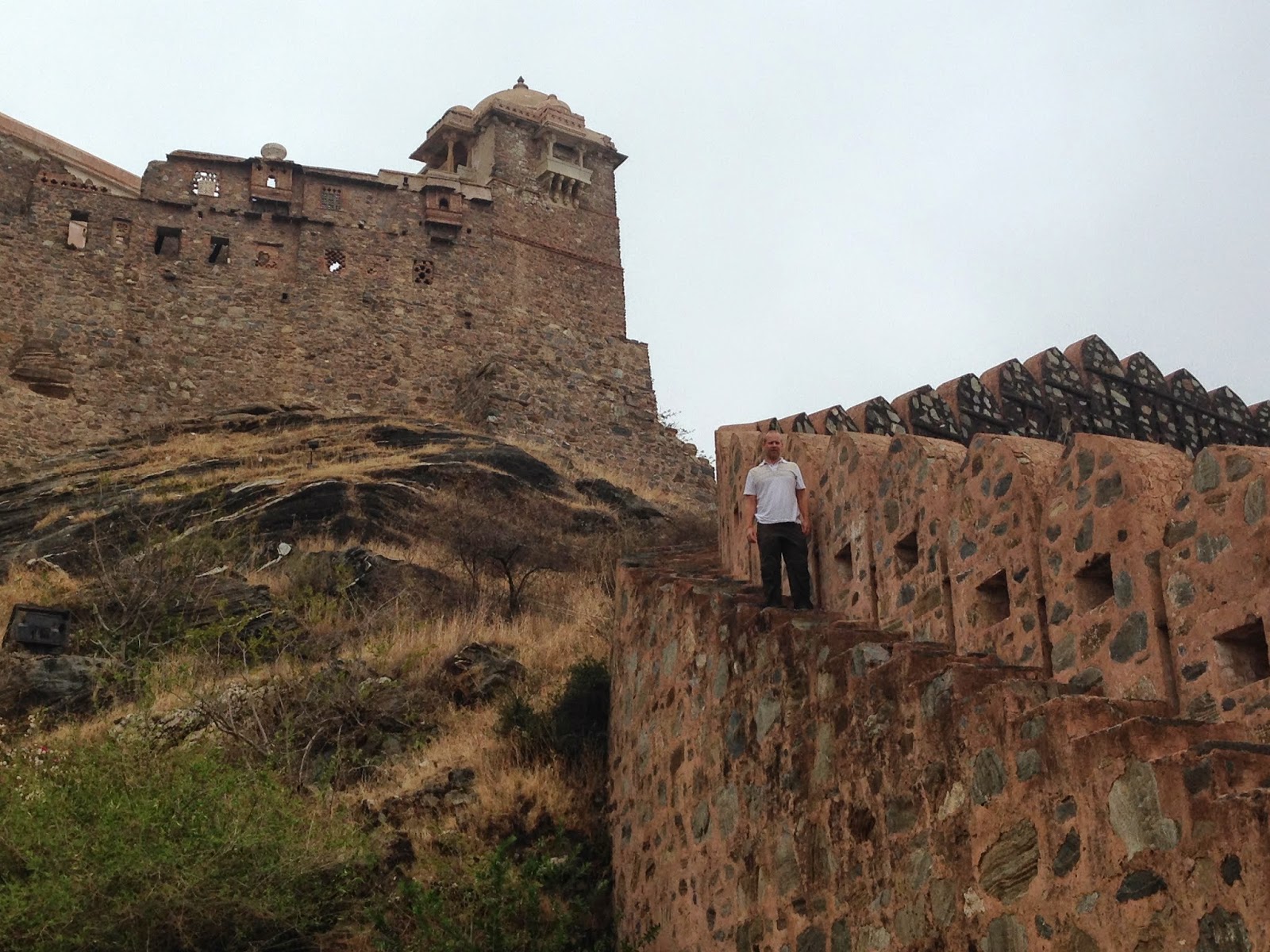 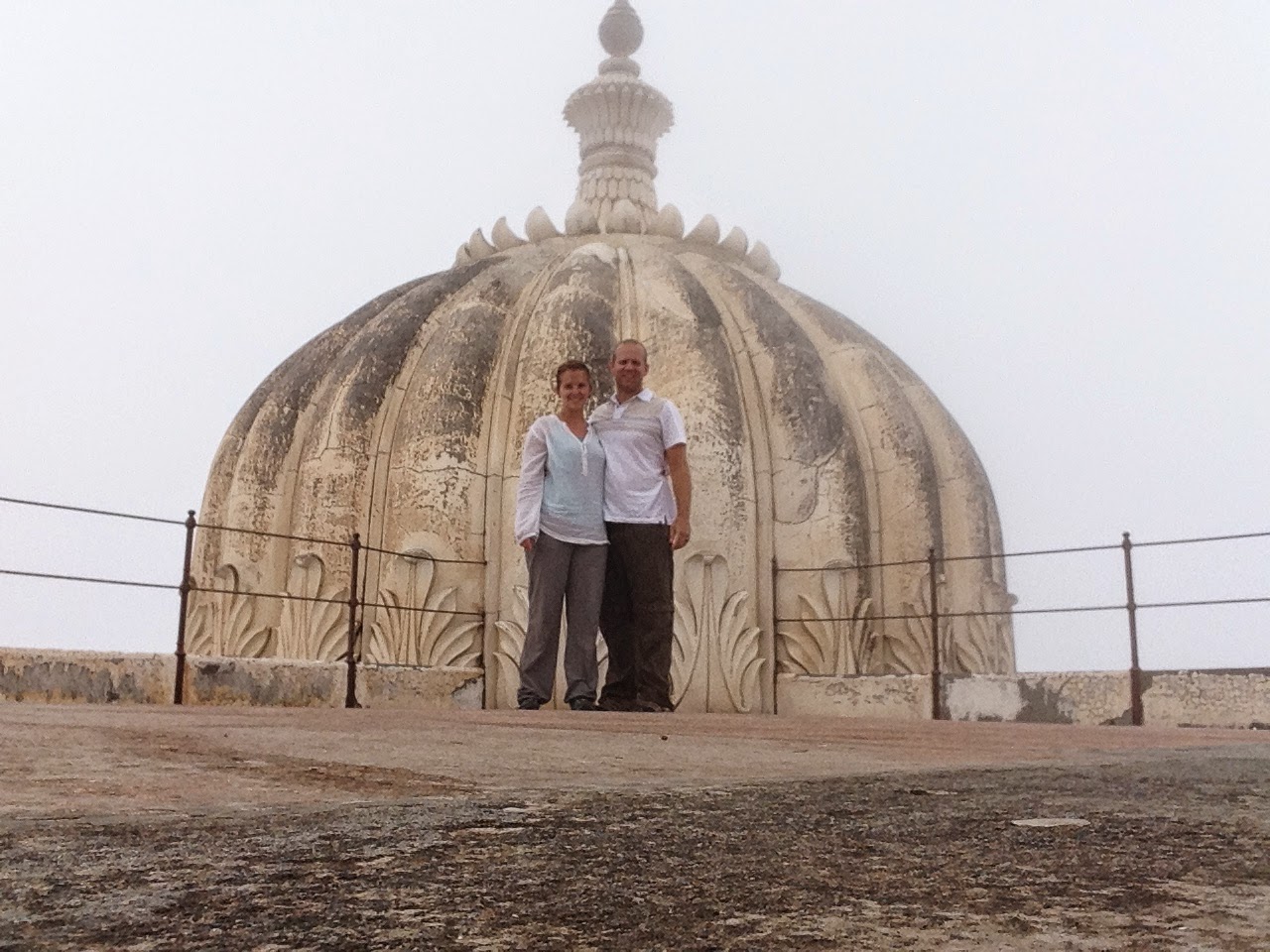 Set the timer and run! 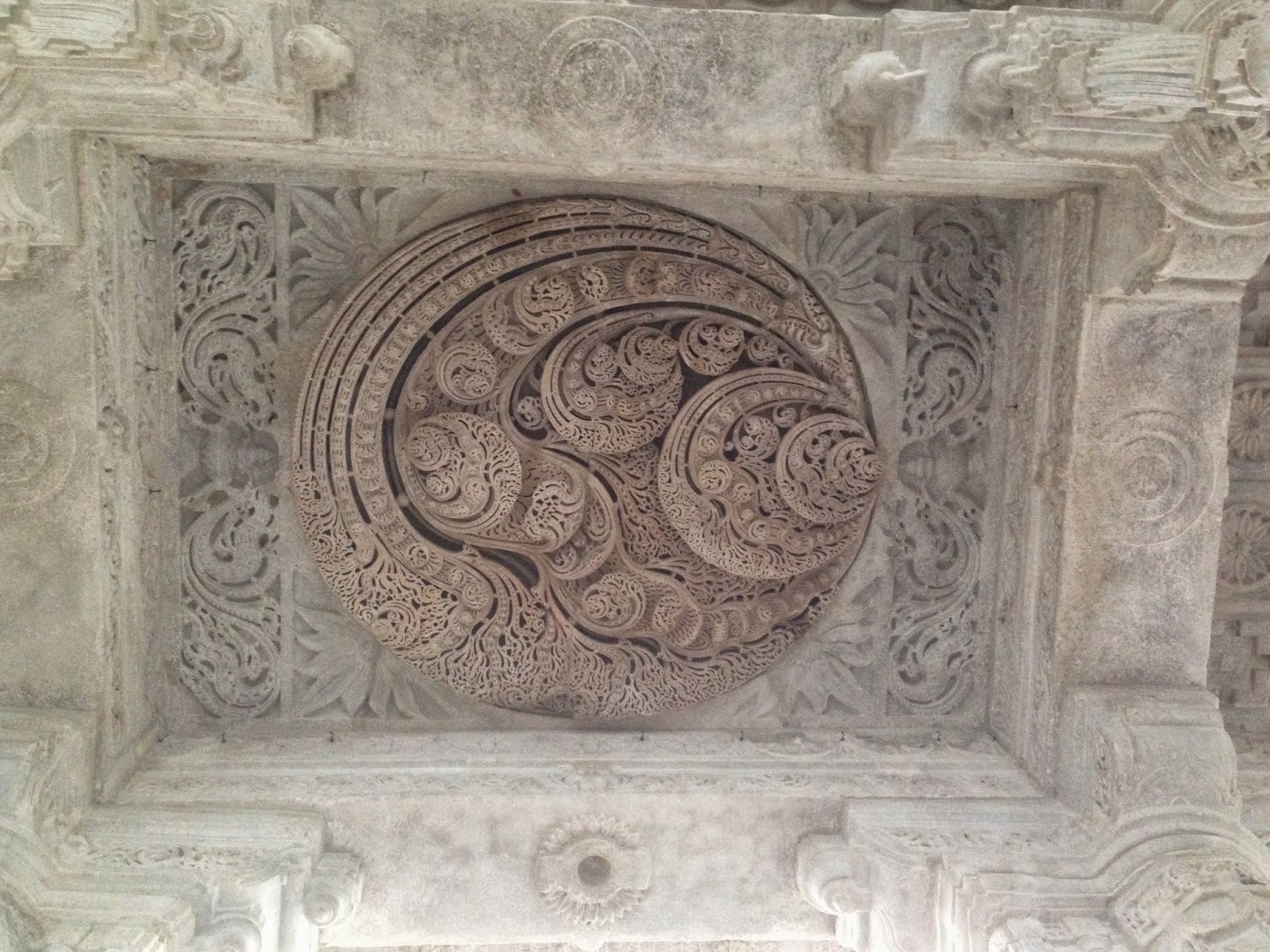 The picture is off centered but this is an Ohm symbol carved into the ceiling. 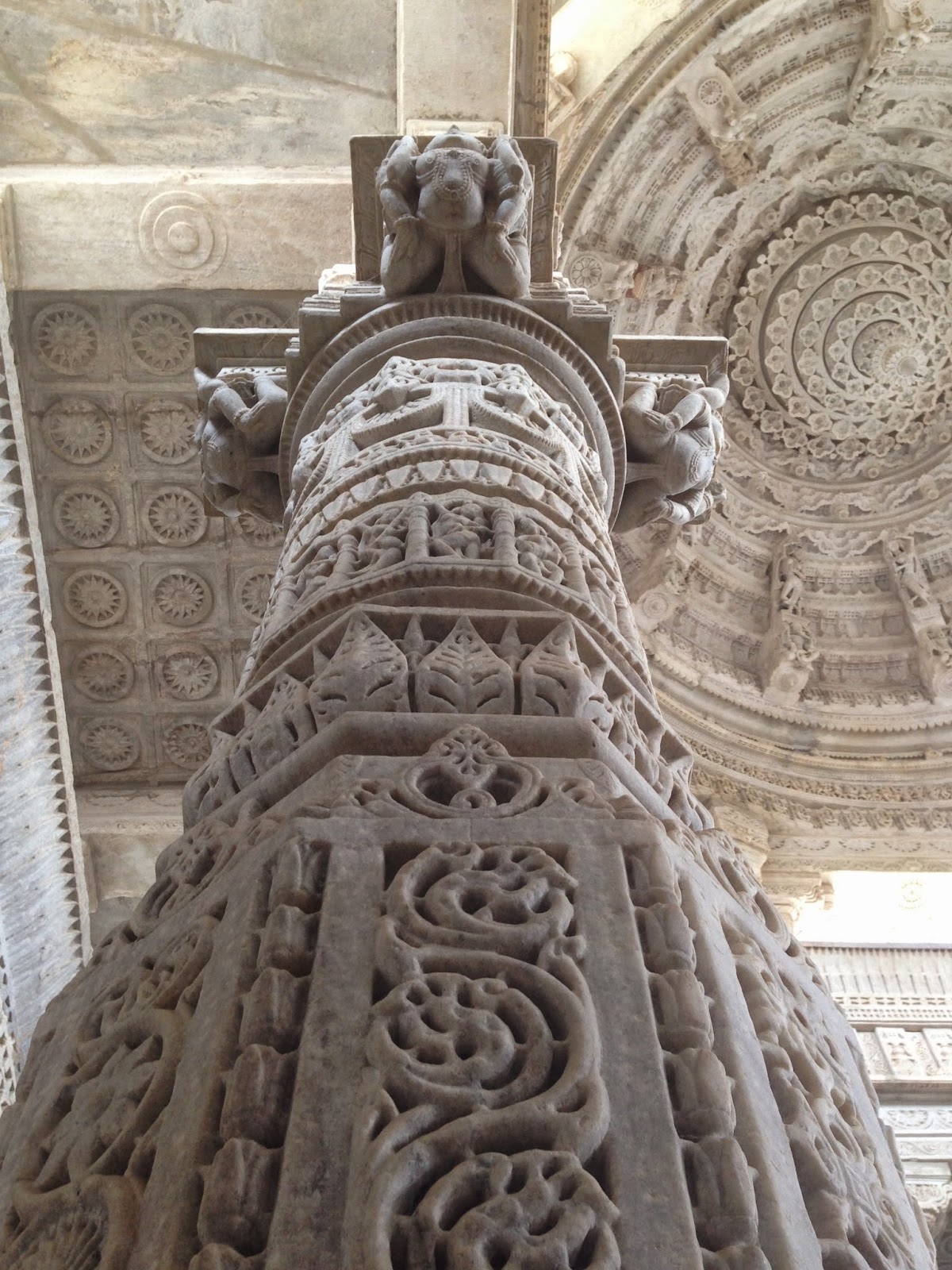 One of the pillars with etched detailing. Each one is different and unique. 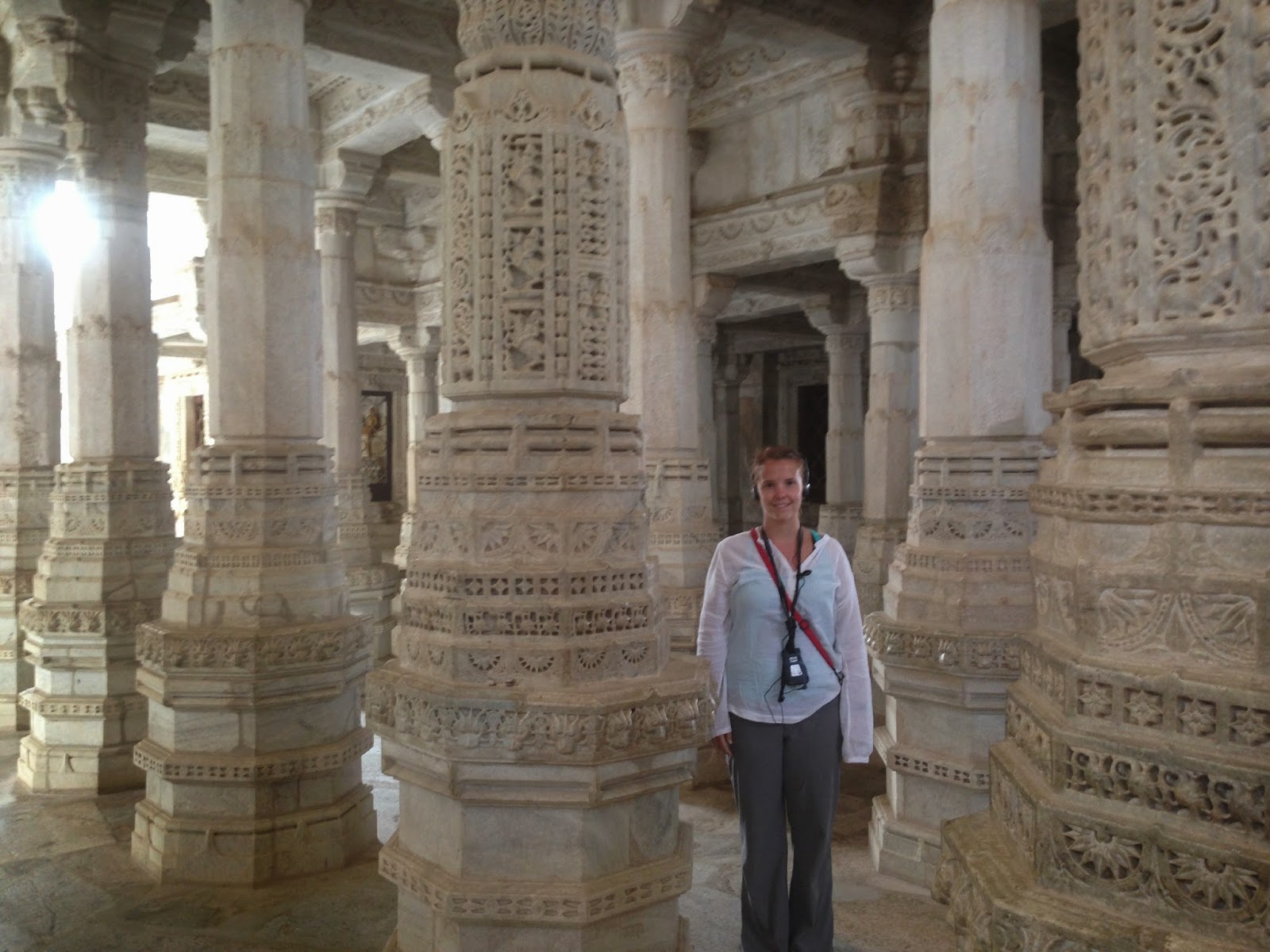 
Our final day in Udaipur we spent walking around and taking pictures. We left on yet another train in the early afternoon to arrive in Jaipur that night. 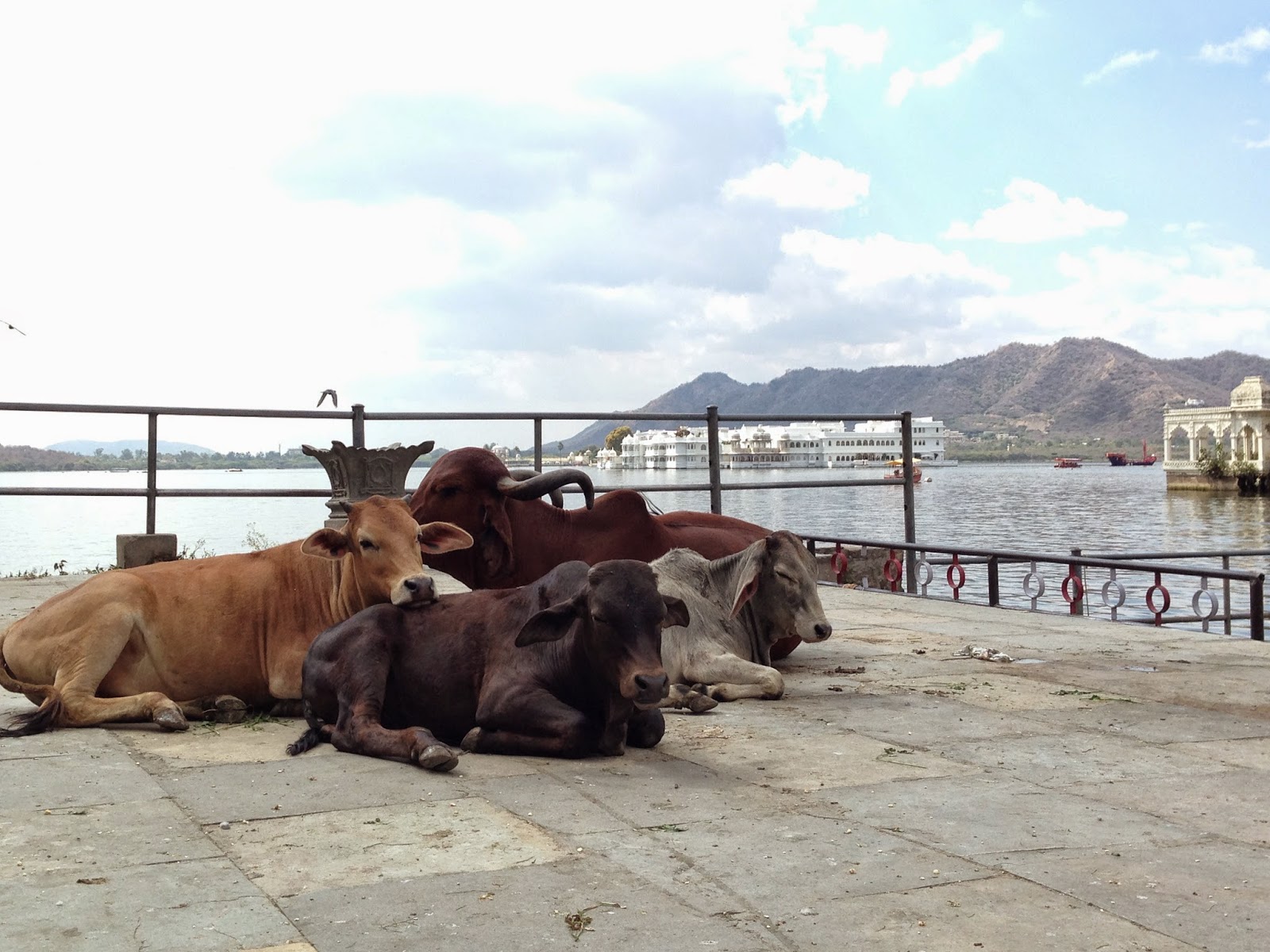 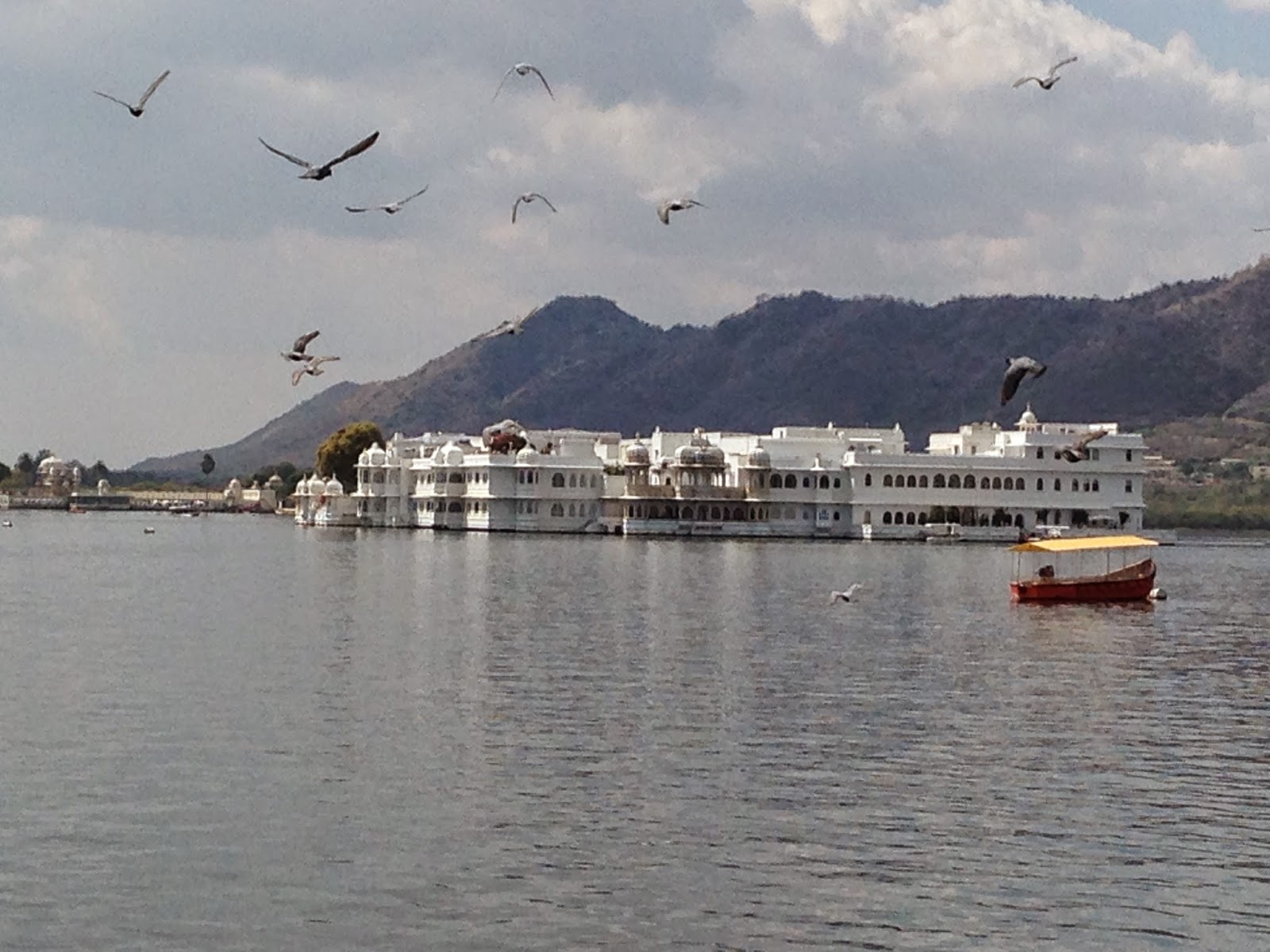 This is the lake palace. It was a retreat for royalty, was another filming site for Octopussy and is now a hotel and not open to the public.
Next stop, Jaipur and the hilarious story of our Holi Celebration experience.
Posted by Christy at 10:19 AM