We left for Phnom Penh (pronounce the “ph” as a “p”! It’s not an “f”, and the “ph” ain’t silent either) by bus from Siem Reap after our second full day at Angkor Wat, arriving late that afternoon. We were tired from the bus ride, but didn’t want to completely waste a full day, so we headed out to the most western friendly area of Phnom Penh called Sisowath Quay, or more commonly known as “Riverside” (Phnom Penh is situated in the middle of Cambodia, where the Tonle Sap feeds into the Mekong.). It’s about what it sounds like; restaurants, shops, and parks down by the side of the…river. 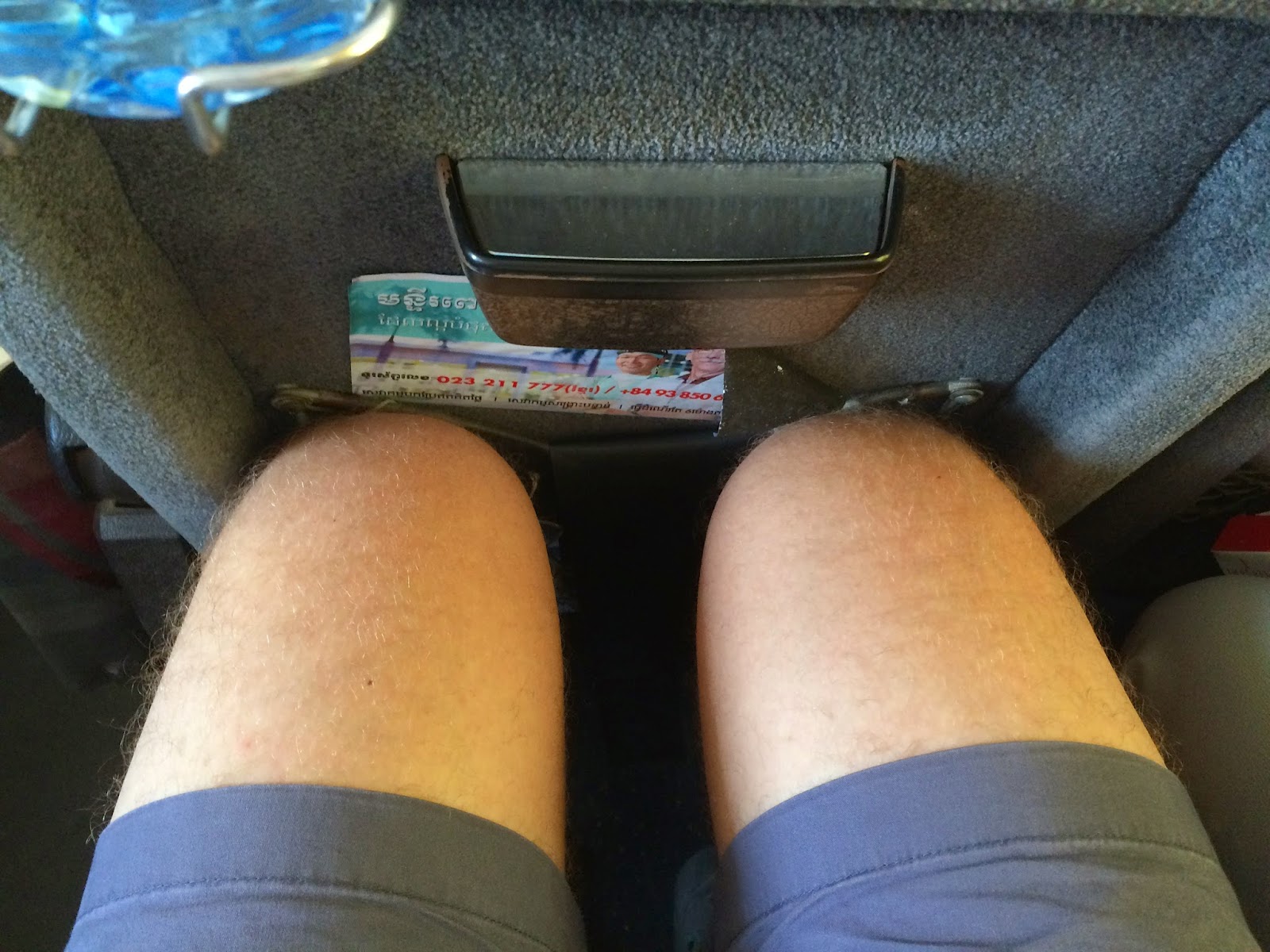 
It should be stated now that Phnom Penh is chaos. Maybe it’s the traffic, or our skewed perception heading into it (unsolicited warnings about muggings were given to us multiple times), but Phnom Penh brought a new level of overwhelmed senses. We’d also been told that Phnom Penh is like what Bangkok was 30 years ago, and it was easy to see why. Take Bangkok, remove the high rises, the public metro system, a visible security force, and any pretense of obeying any of the few traffic laws and lights, and you have yourself a Phnom Penh. Needless to say we were always a little more on guard, and never stayed out much past dark.


We had dinner and took a stroll on Riverside. There was a DQ, and if you see a DQ in Cambodia you’re obligated to go. I can verify that even in SE Asia they have to turn your Blizzard upside down before they hand it to you. 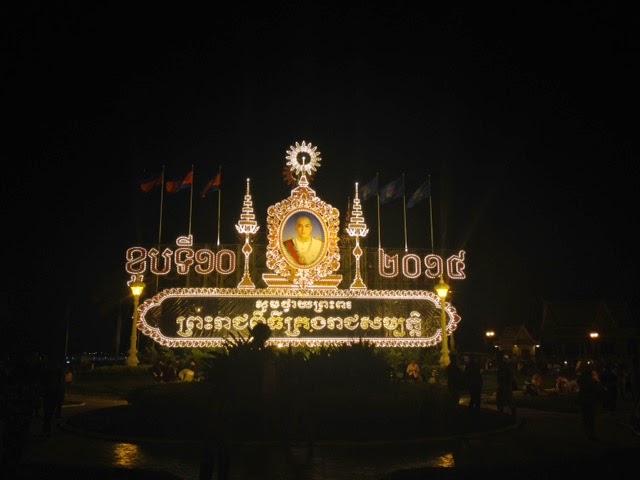 The King gets a billboard outside the Royal Palace, just in case anyone forgets who lives there.﻿
The next day had been set aside as a day where we each went our own way. Christy had the opportunity to visit with a (I say “a”, but it might actually be “the only”) speech pathologist doing NGO work in Phnom Penh, so I was on my own.  Here's Christy's account:

I met up with Elizabeth Chafcouloff, an SLP from the US who started Speech Therapy Cambodia (speechie friends, check out her Facebook page!). She is currently working with two hospitals in Phnom Penh and is training their neurology students about speech, language, cognitive and swallowing evaluation and remediation. It was so cool to see how excited they were about expanding their knowledge base and including the tenants of speech, language, and swallowing in their assessment and treatment of patients. Cambodia (the whole country) currently has no speech therapists or a speech therapy education program. Elizabeth is working to add some curriculum to the training program for doctors as well as physical therapists. I don't have any pictures because I thought I would be able to return the next day when they were doing FEEs training, but I got sick. Overall, I am so thankful for the short but wonderful experience and I hope to meet up with Elizabeth again!

I went for a workout at the only Crossfit gym in Cambodia, Crossfit Amatak. While I was a bit rusty and awoke the next few days to soreness, it was a needed change from our usual travel workout of running, situps, burpees, and/or jump rope. The gym was very welcoming, and they even had a (mostly) paleo café attached, which provided a respite from rice and noodle dishes. 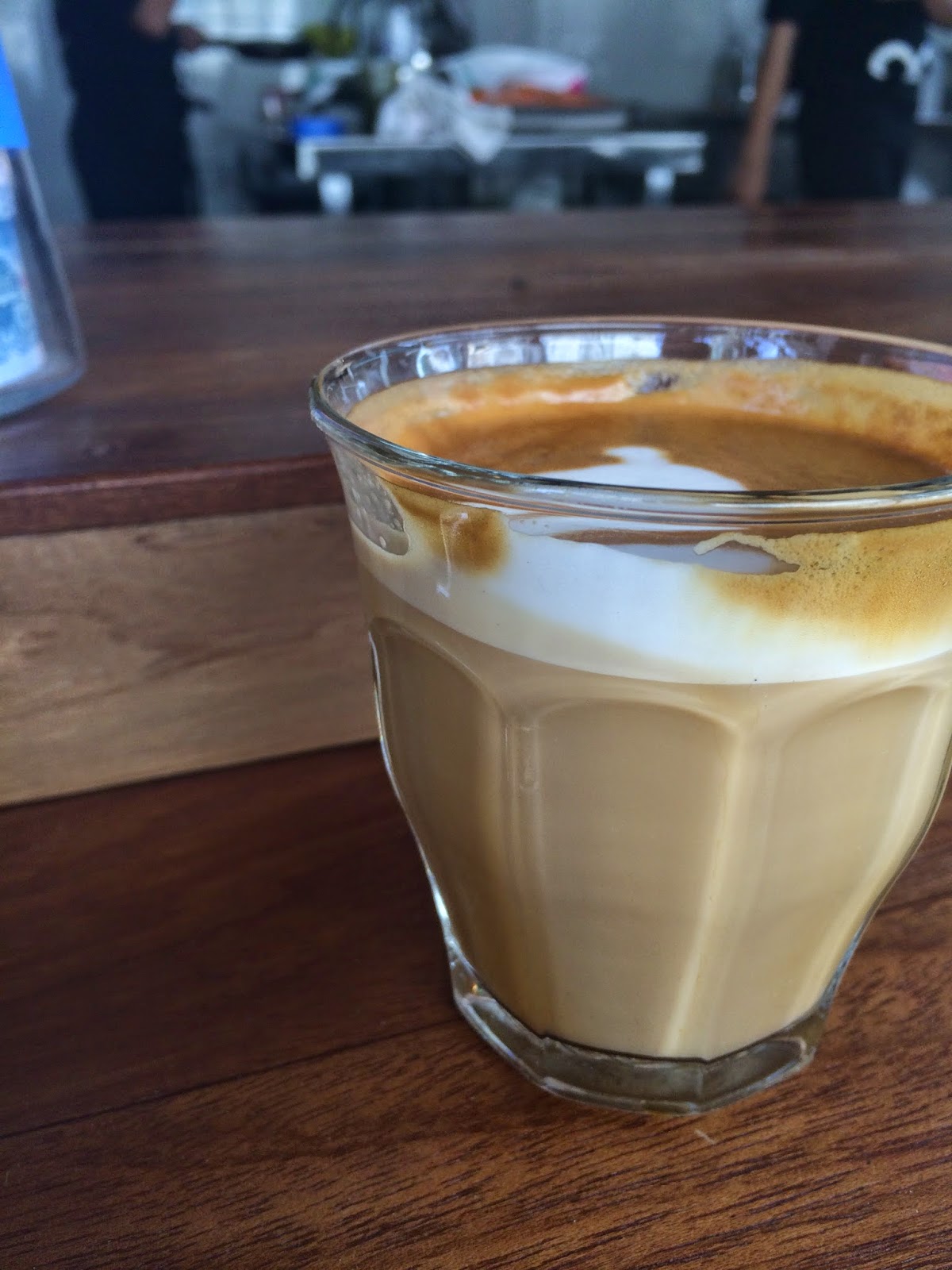 Sorry no workout pics, so here's one of their lattés.


Christy and I met back up later that afternoon, but since Christy had begun to feel sick, we stayed in for the rest of the day. The next day, with Christy still not feeling well, I stayed in that morning until Christy started feeling ok enough to be by herself. NOTE: I did not abandon my wife in the city that I just described as chaotic. I made sure that she was taken care of before I left to go see more of Phnom Penh.


One of the subjects I wanted to make sure we covered while in Cambodia was the Cambodian genocide. I’d heard of the Khmer Rouge and Pol Pot, but I didn’t actually know anything about what happened, and in my experience I don’t think many Americans do. Unlike the Holocaust, which is on our TV, in our movies, and taught in our history classes, knowledge of the Cambodian genocide generally remains limited to the aforementioned Pol Pot. That’s not to compare the two; it’s genocide. But I do think it’s a shame that we don’t acknowledge what happened in Cambodia less than half a century ago. Go here and spend 5-10 minutes reading more, but in short, between 1975 and 1979 the Khmer Rouge tortured and/or executed up to 3 million Cambodians, and at least 25% of the total population. For comparison, that would be about 80 million Americans murdered in over 5 years.


My afternoon was spent at Tuol Sleng, also known as S21, which was a secret prison the Khmer Rouge sent perceived enemies for torture and almost certain execution. It is not a pleasant experience. It’s mostly an empty complex filled with only pictures of the horrors left behind when the Vietnamese threw the Khmer Rouge out of Phnom Penh. 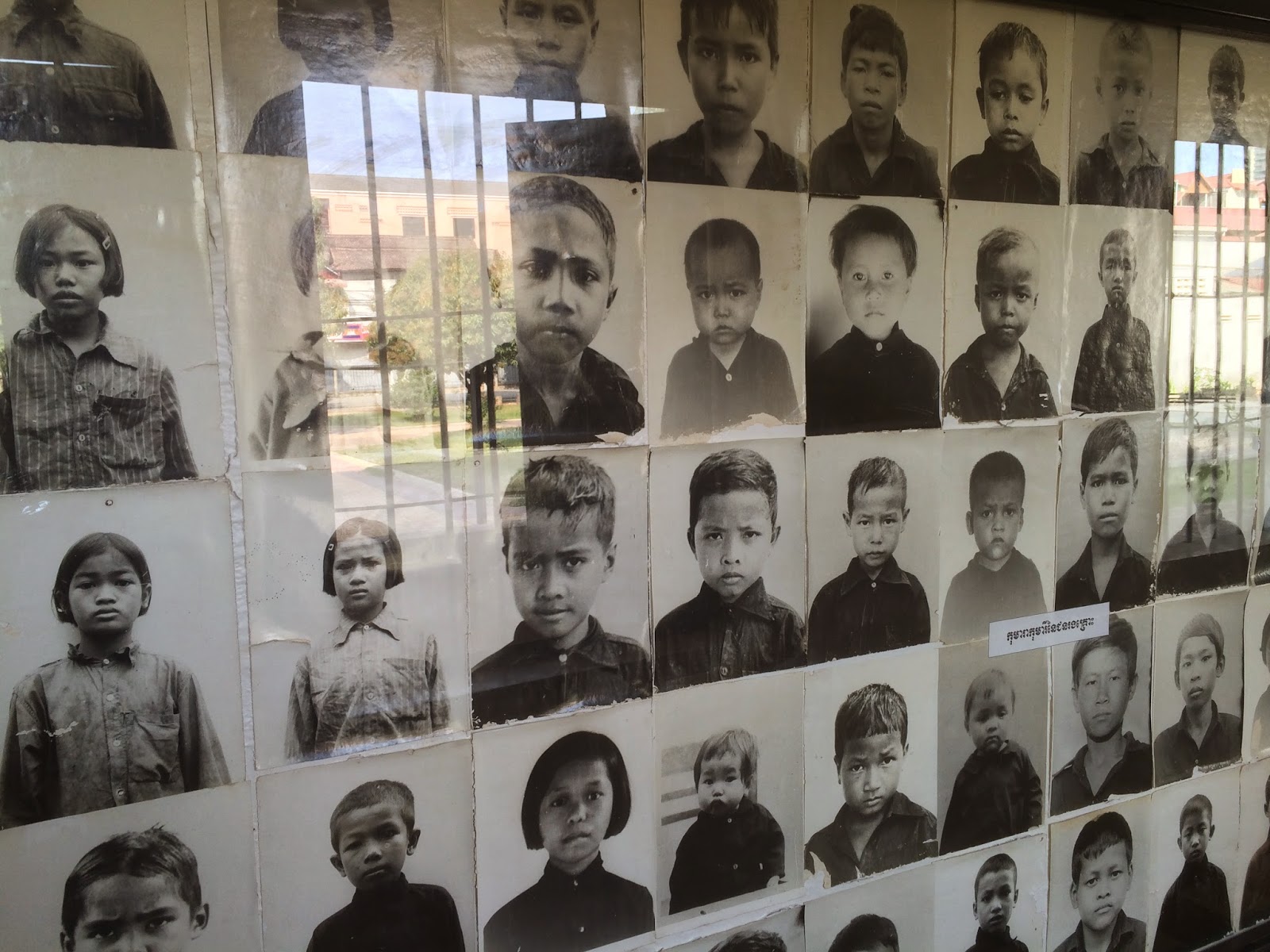 The next day, with Christy feeling well enough to head out, we went to Choeung EK. Of all of the notorious “killing fields” that were used during the Cambodia genocide, Choeung Ek is the closest to Phnom Penh and as such has been set up as the de facto memorial site for all of the genocide victims. Most of the S21 victims were brought here for execution. Again, another profoundly sad place to visit. Some remains were excavated and had been placed in a memorial stupa, and more remained in their makeshift graves. The most jarring moments came about from seeing remains that were exposed, either on or just off the dirt walking path. Memorial staff placed warning/do not disturb signs in these locations, but it seems they had run out of enough signs to place as some exposed remains had no such signage. Apparently this problem is exacerbated during the rainy season.
The Memorial Stupa. At the bottom of the pic you can see some of the earth that has sunk where the graves were.﻿


That afternoon Christy took the rest of the day off to finish her recovery. I decided to go out and see what was left of Phnom Penh before we had to leave the next day. First stop was the currency exchange so we could have some cash when we landed in India, and then a search for KFC. Most people experience hunger for comfort foods when they’ve been traveling awhile. From experience, I can say that when you’re sick that feeling magnifies. My wife wanted mashed potatoes and gravy, and we figured the ubiquitous KFC would have it if anyone did. Sadly, Google maps is rather unreliable in SE Asia and KFC was nowhere to be found by our hotel. I then proceeded to do something my parents would not be happy with; I took a motortaxi (motorcycle + taxi). Yea, no helmet and in that traffic, but I was tired of waiting to find a tuk tuk and I needed to get to the Royal Palace before it closed. Well I made it in one piece, though I’m pretty sure I white knuckled it the whole way. If that’s the craziest thing I do while traveling then I’d say Mom and Dad can rest easy. The Royal Palace was fairly similar to the Grand Palace in Bangkok, with coronation halls and residences and chedis and temples. Cambodia even has their own Emerald Buddha, though it is not as impressive as its Thai counterpart. The most unique site of the Royal Palace was the Silver Pagoda (which housed the aforementioned Emerald Buddha), named for the silver tiles that line its floors. 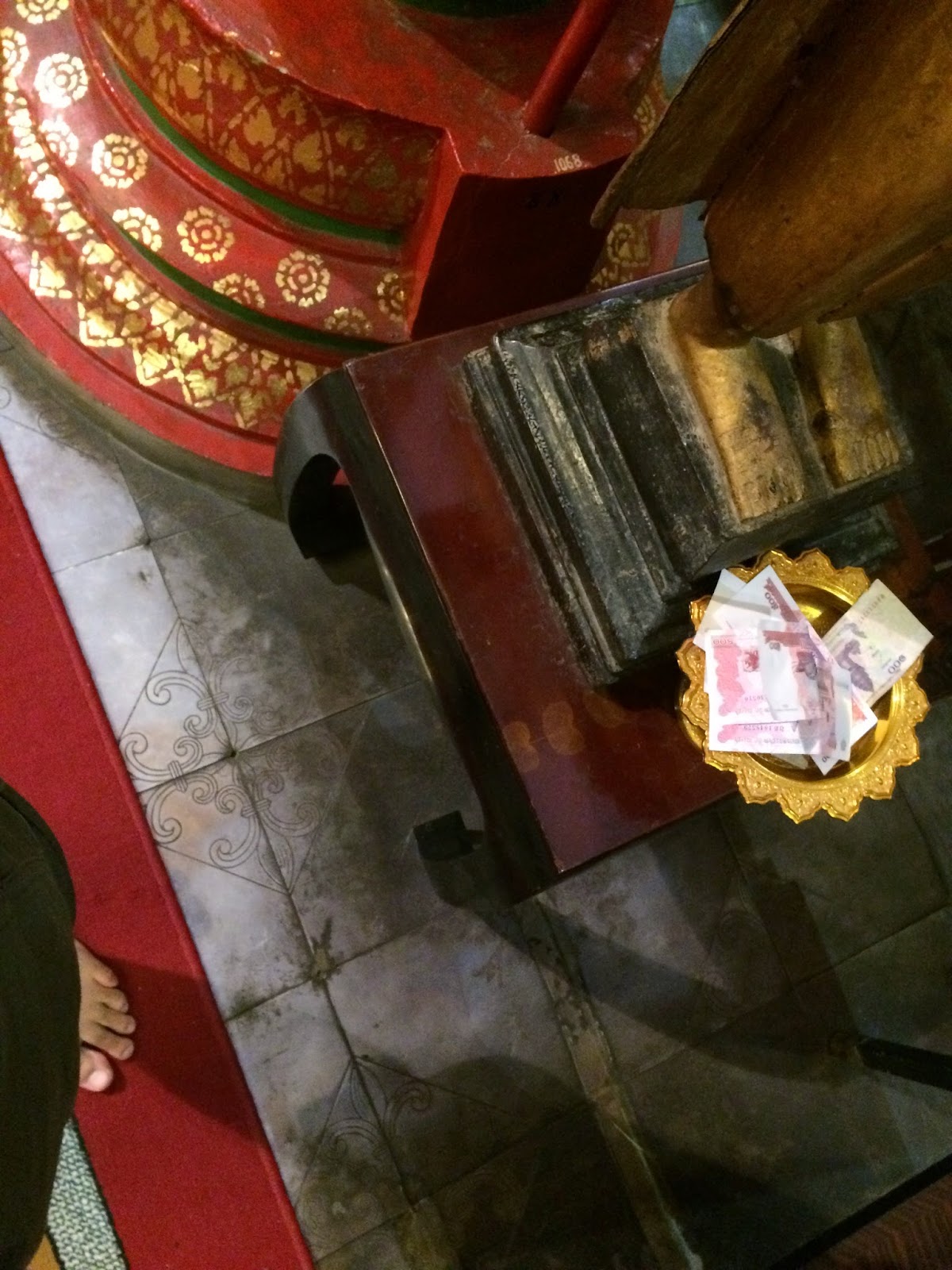 After that I proceeded to Wat Phnom, a 12th century Buddhist temple located in the heart of Phnom Penh. It happened to be Chinese New Year, and although Phnom Penh’s Chinese population isn’t near as large as other SE Asian cities, it’s still substantial enough to turn Wat Phnom into a bustling hive of local ethinc Chinese offering prayers for the coming year. 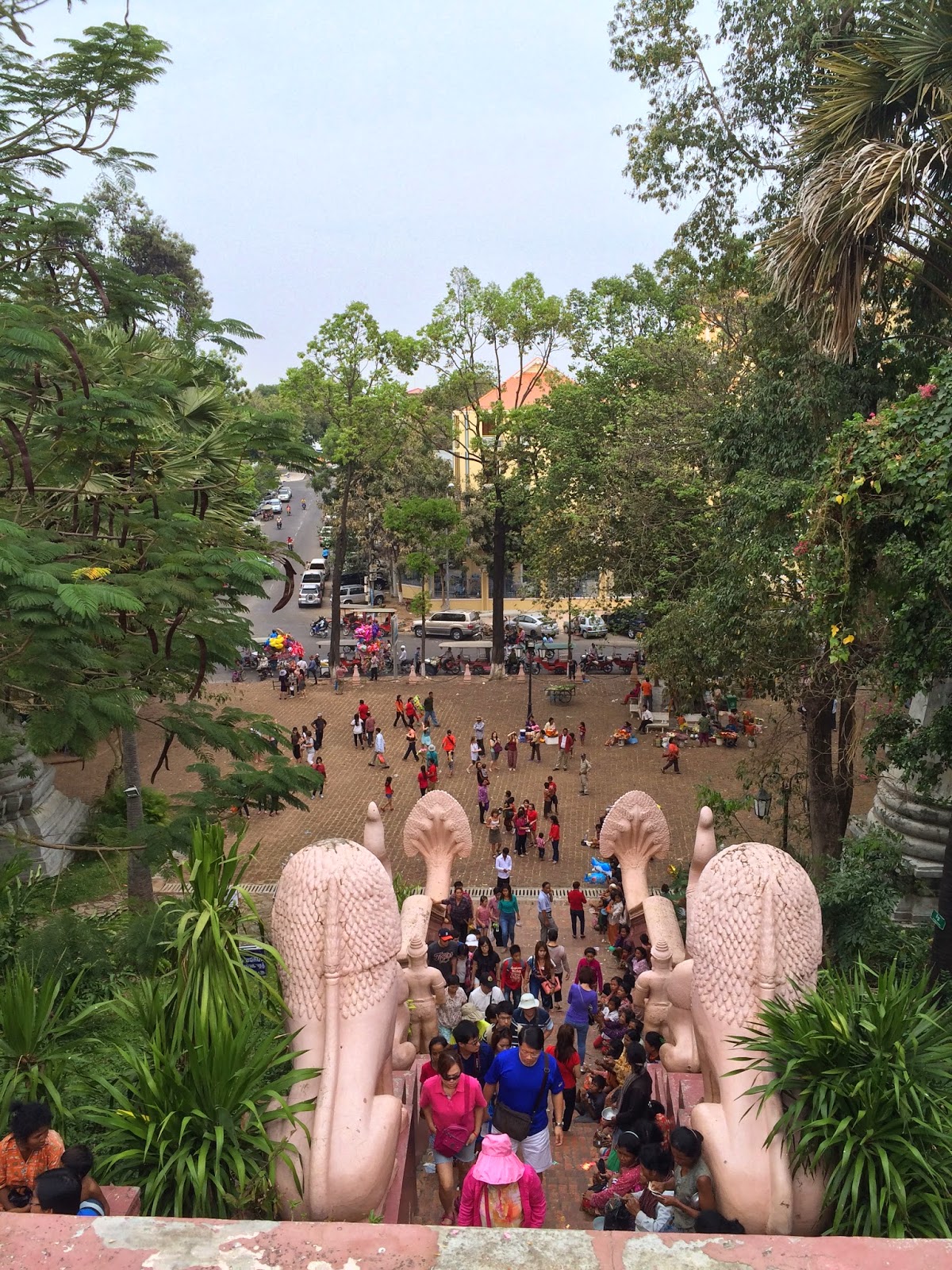 Looking down from Wat Phnom. I didn't intentionally want a picture of the beggars on the staircase, but they were there and plenty in number, likely because of the CNY. 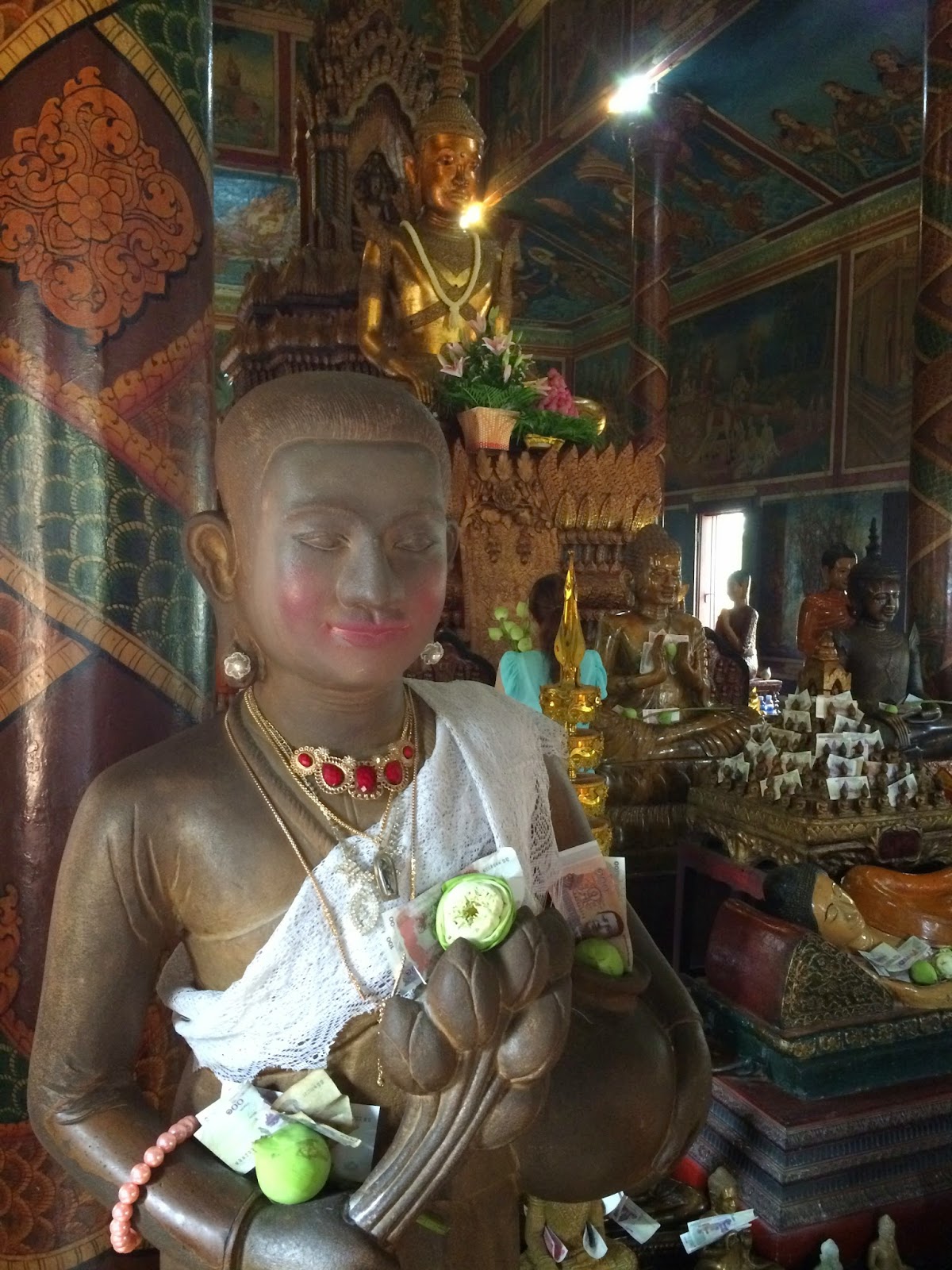 Lots of alms for the Buddha.
﻿
The best thing about Wat Phnom? It was about 200m (everything in my mind is in meters and Celsius by now) away from a KFC. I valiantly returned to the hotel with mashed potatoes, gravy, and French fries. Next stop, India.
Posted by Christy at 5:54 AM