There hasn’t been much of a time schedule to guide our travels. Besides visa restrictions we both agreed that we would be flexible about the time spent in each location, allowing us to stay or go as we please. However, there were a couple festivals or holidays which we wanted to experience in a certain country. Holi in India was one of those holidays. After Jared’s (always thorough) research, he decided that Jaipur would be the place to celebrate Holi. Holi is meant to celebrate the coming of spring and love and happiness in general. The celebration consists of people throwing colored powder at… everyone. At your neighbor, at your fellow consumer, at a random passerby, during Holi everyone is fair game. Even the cows get ‘colored.’ In preparation, we bought our own bags of colored powder, cheap white clothes and Jared wanted water guns because water + colored powder = colored goo. The morning of Holi, we almost didn’t get changed into our white clothes fast enough, as the hostel we were at got the colored powder out at 9 am (our hostels in Jaipur is a separate post). We decided to go to an organized, ticketed Holi celebration at a nicer hotel. This decision was based on research and local advice that revealed that in some parts of the city, locals would often just drink and could become more physical (especially with women). That was not a scene we were seeking and we do not regret our decision as we still had a great time! We were at a field next to a hotel where they had set up food booths, a stage with a DJ, several security guards and they provided colored powder. We arrived around 10 or 11 in the morning and stayed until about 2. During that time, we danced, threw powder and celebrated with locals and westerners alike. Jared was really getting into the spirit and he was even dancing some (dancing is a pastime in which he does not typically partake). In fact, he was so unaware of his own skills that as he danced, a small hole in his pants steadily grew in size until the seam on one pant leg was completely ripped from the crotch to about his knee. This became a problem as he could not walk, let alone dance, without the whole of Holi seeing what lie under the hole. It got to the point that the pant leg began to more closely resemble a leg tunic rather than complete pant. We weren’t ready to leave yet so we asked security if we could go into the hotel to see about buying some new pants. A very nice guy walked us (well...Jared waddled) to the gift shop. During that short commute, we encountered several older Chinese tourists who were not partaking in the festivities but thought we (especially Jared), covered in color, were quite fascinating. We stopped for pictures and proceeded to the gift shop. Instead of new pants the lady at the shop gave us a needle and some thread. Those of you who know me and my awesome domestic skills know that I am an awesome seamstress (haha). As I began to start my work, our fans from the lobby made their way into the shop and continued taking pictures. The tourists taking pictures of the tourists sewing up a giant pant hole was enough fodder for laughter to last me awhile but, it got even better. Jared, employing all sorts of stereotypes, assumed that one of the older ladies knew how to sew. Through gestures he asked if one of them would be able to sew up his pants. They were more than willing to help and there may even be a video of the interaction somewhere on Chinese YouTube. They were so kind and easy going, we got some pictures with them as well and a memory was made for everyone involved. After that (with Jared's pants passably sufficient) we spent some more time enjoying the festivities. When we were completely covered in color and adequately exhausted, we went back to our place for food and rest. We spent the rest of Holi at our hostel relaxing and trying to plan to rest of our time in India. 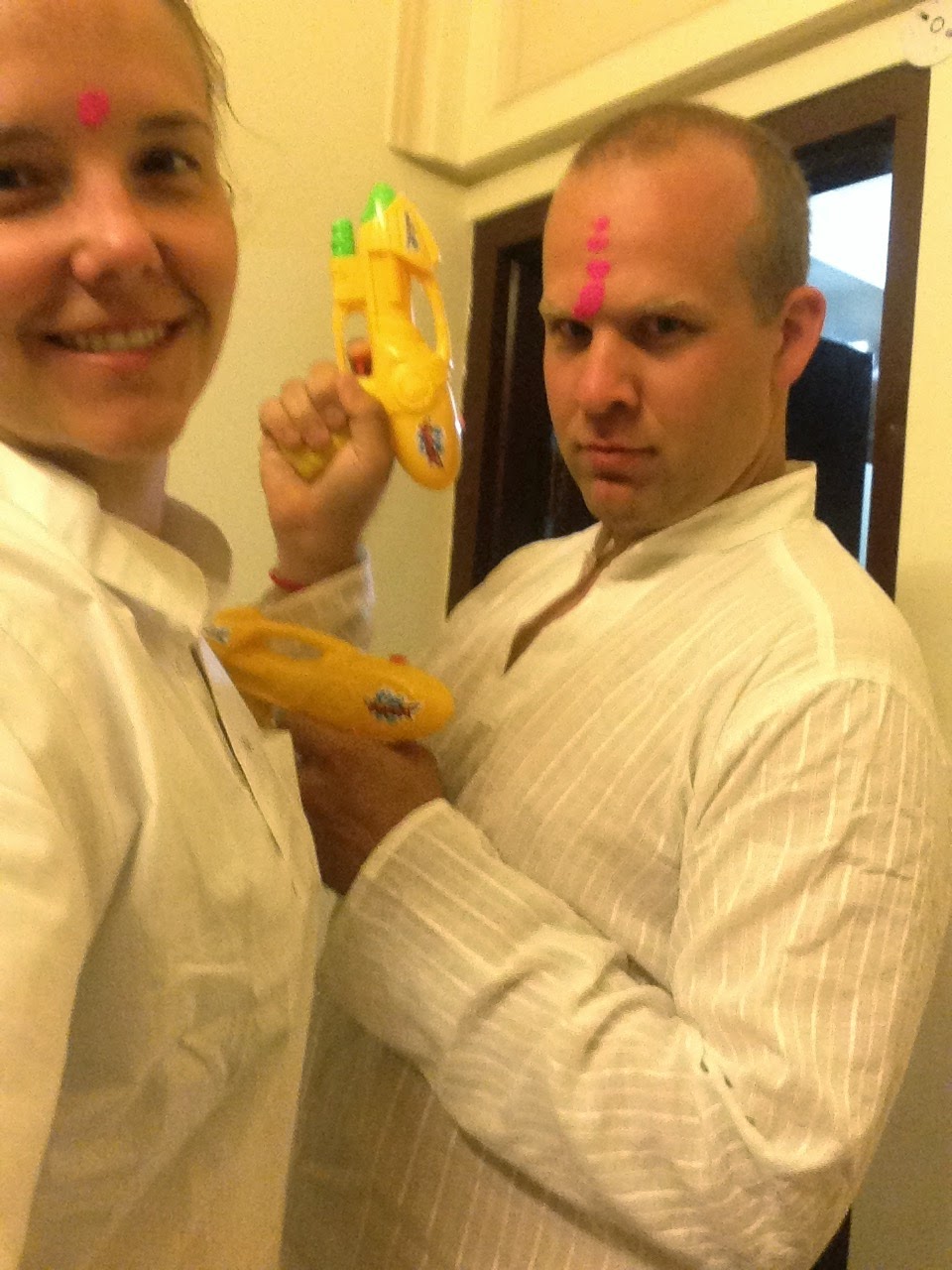 Pre-Holi in our white clothes 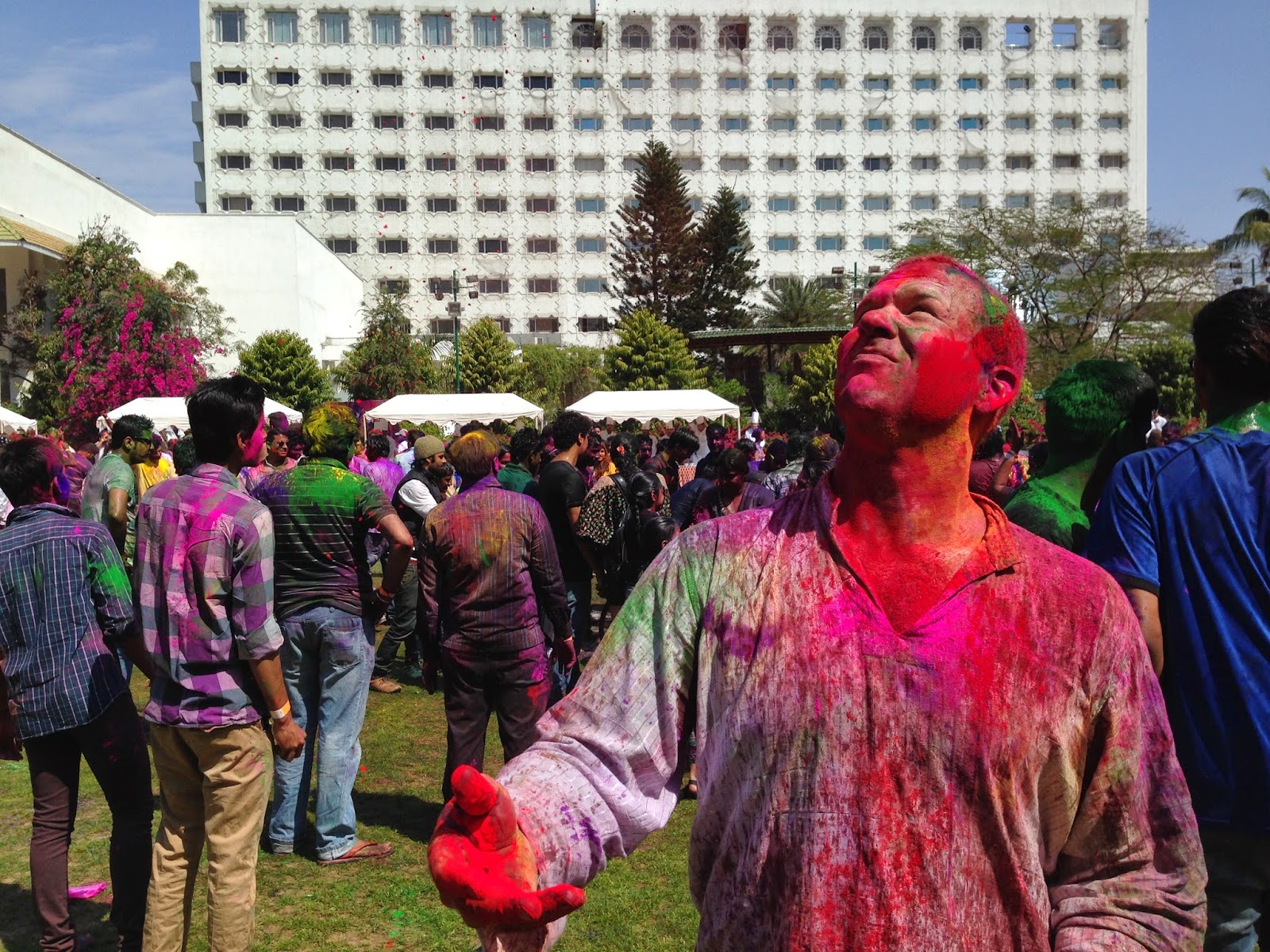 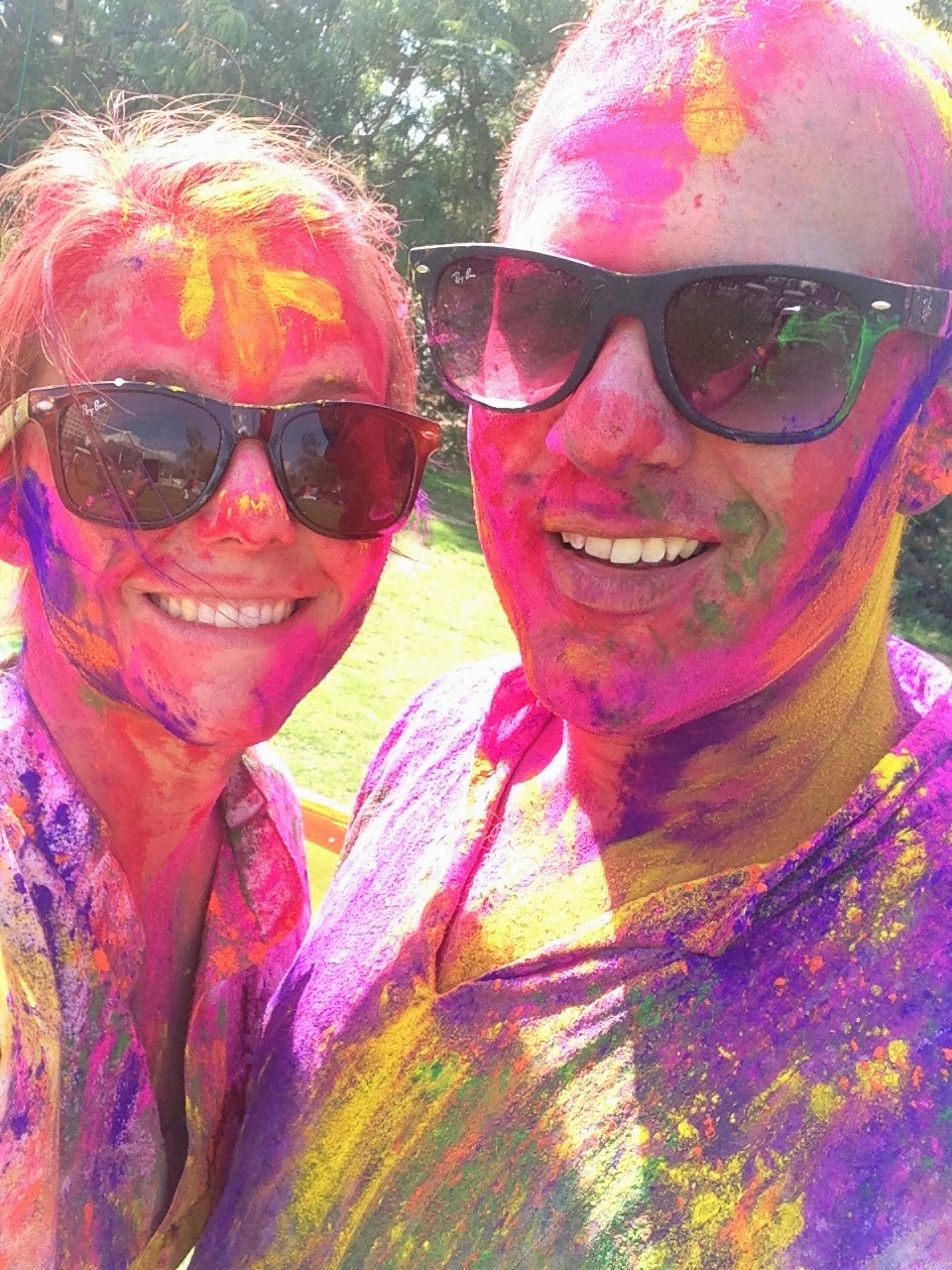 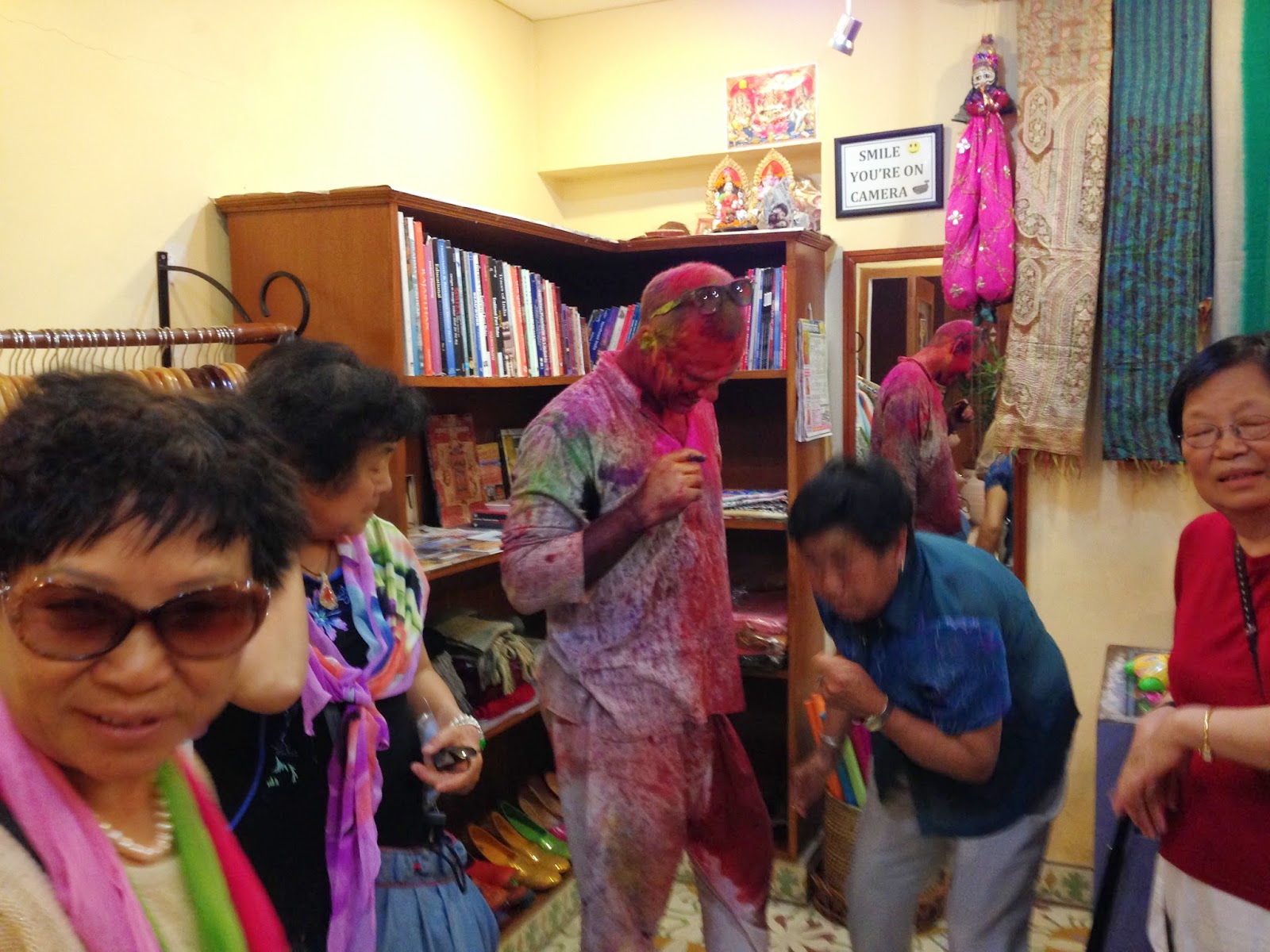 The ladies as they helped sew up Jared's pants 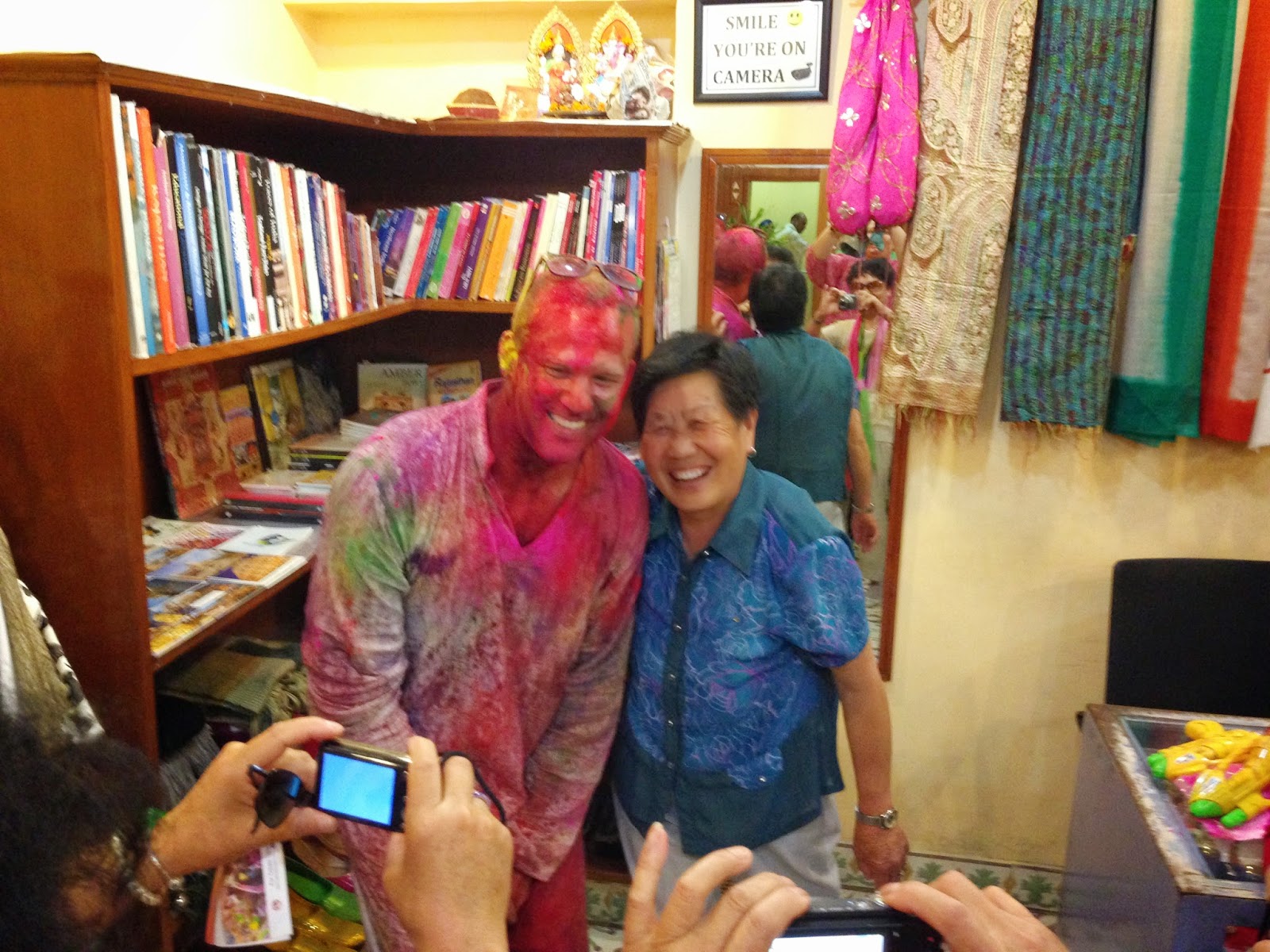 She saved the day! 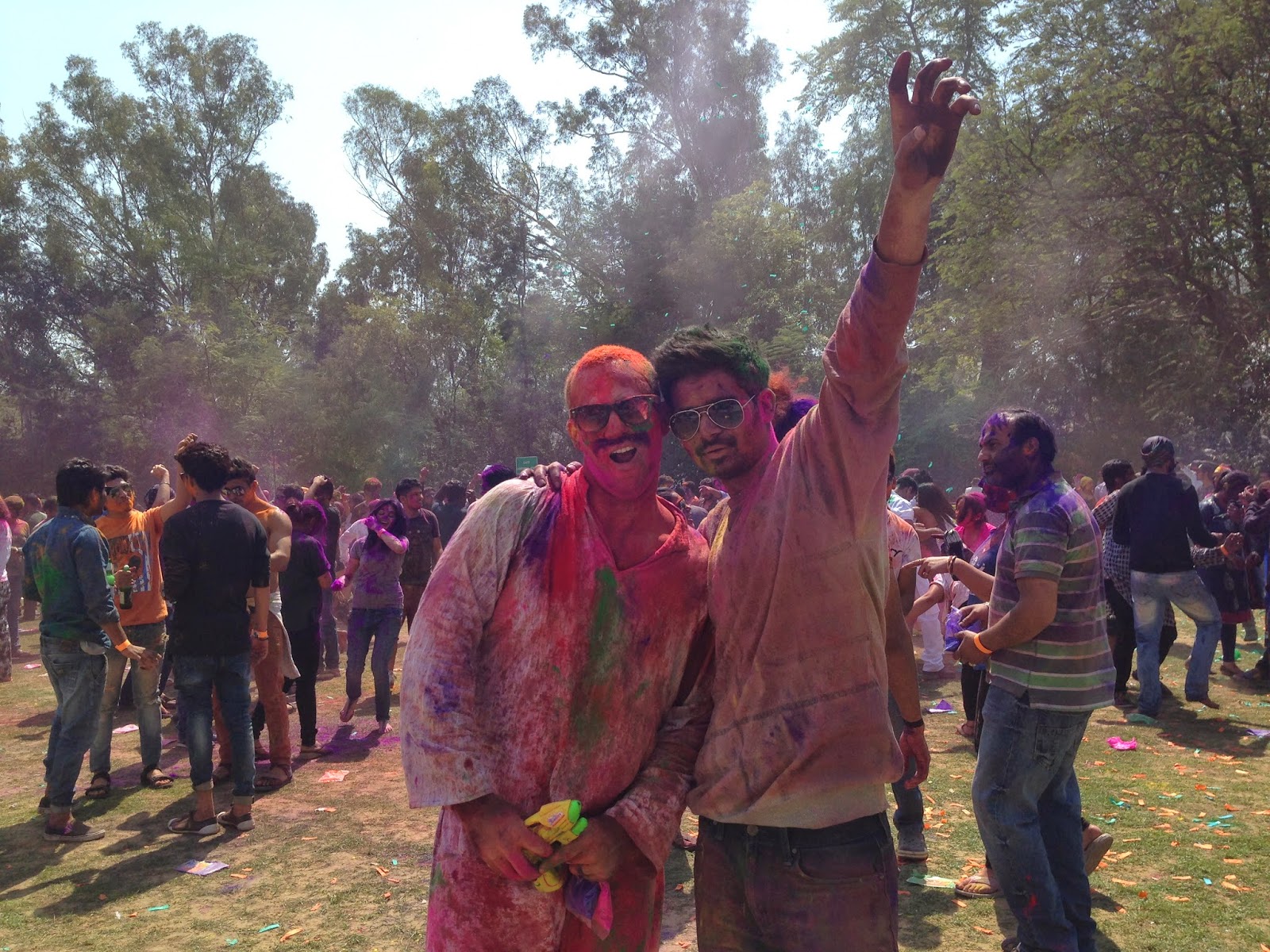 Jared with a new friend


We also had some time to do some sightseeing in Jaipur as well. We visited the Ahmer Fort, City Palace, Jantar Mantar and Hawa Mahal. Ahmer Fort consisted of a larger palace area than the palace we visited outside Udaipur, and it was in better condition, with remnants of stained glass, paint, and restored gardens. The complex was huge and it took several hours to see all of it. This fort is also home to the world’s largest cannon on wheels. That’s right. Largest cannon on wheels. It seemed like something that should be on the roadside of Route 66. It is a cool fort and all but really only because it is a fort. There didn’t seem to be anything particularly special about it. 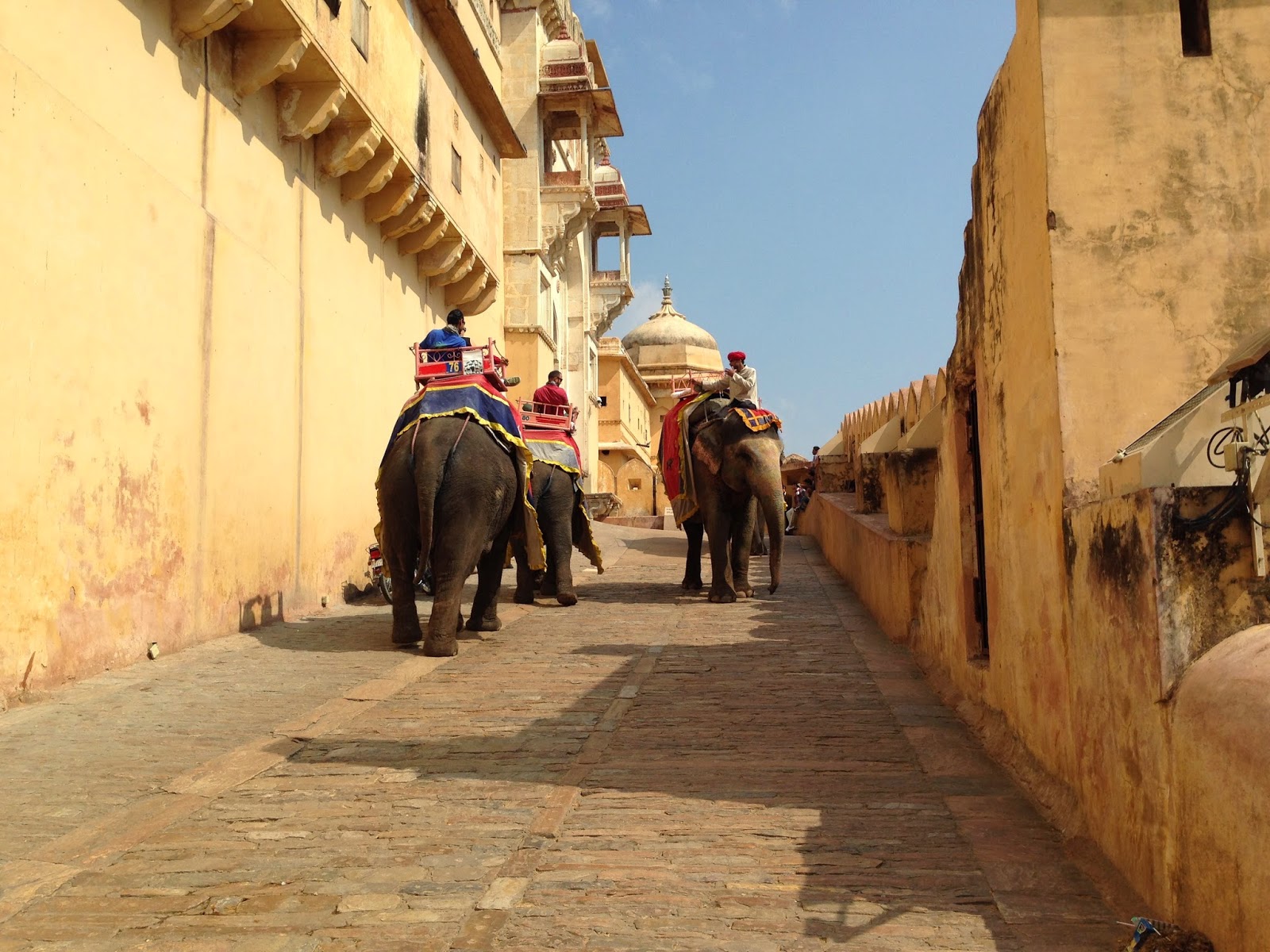 The road up to the palace is so steep that they use elephants to transport tourists to the top. We are too hardcore for that though, we walked. 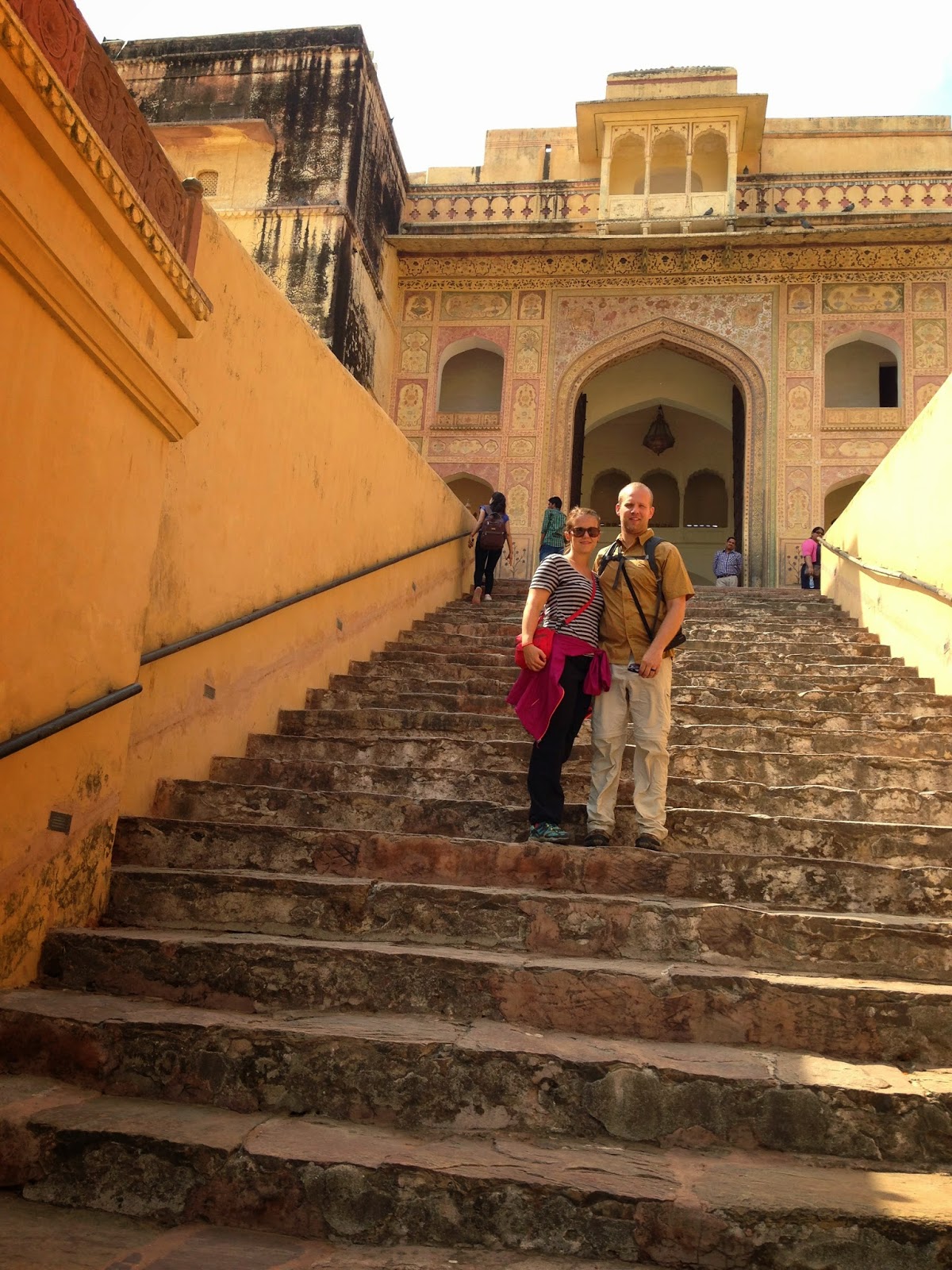 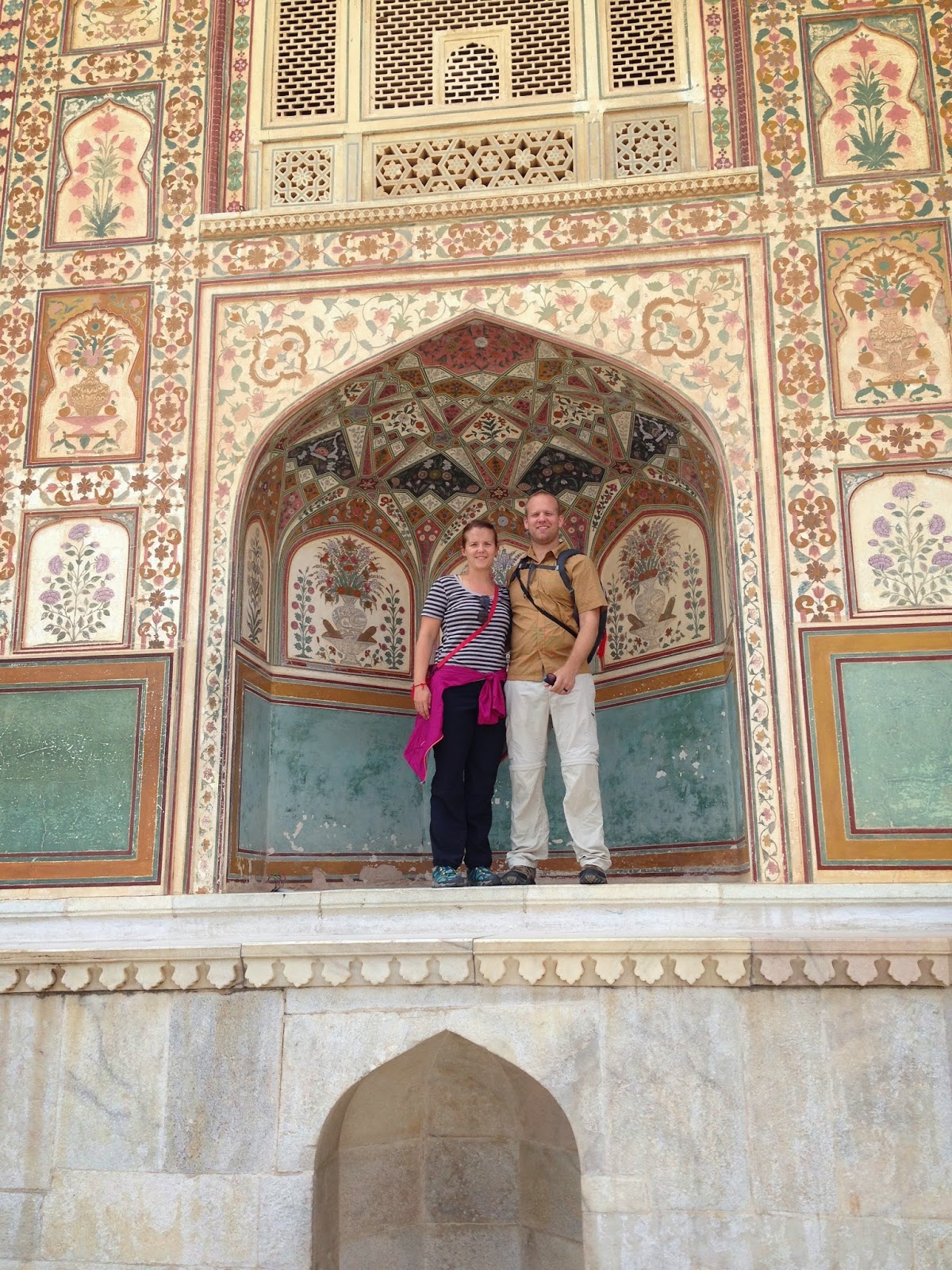 In an alcove flanking either side of the main entrance 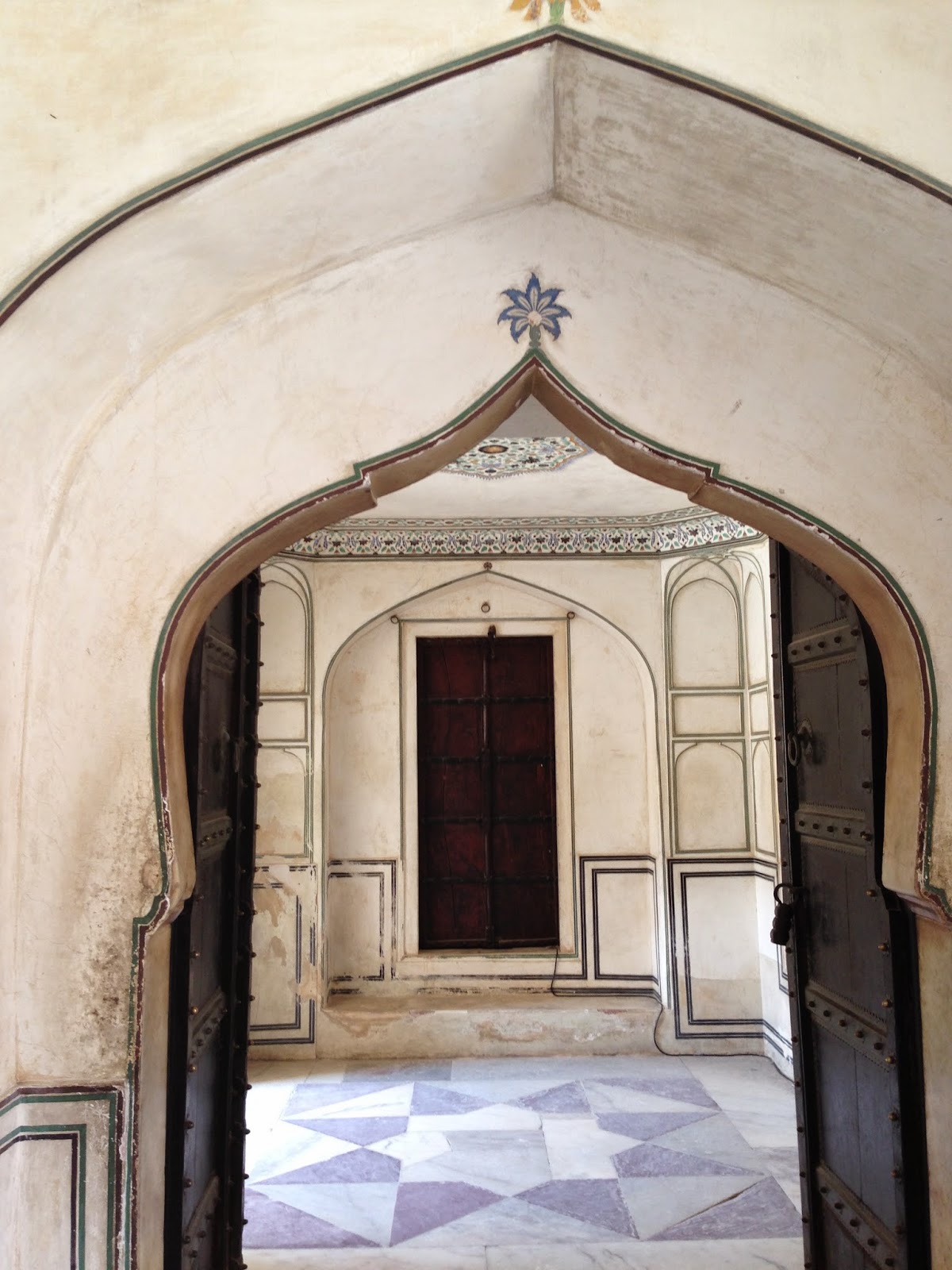 The entryways were beautifully designed 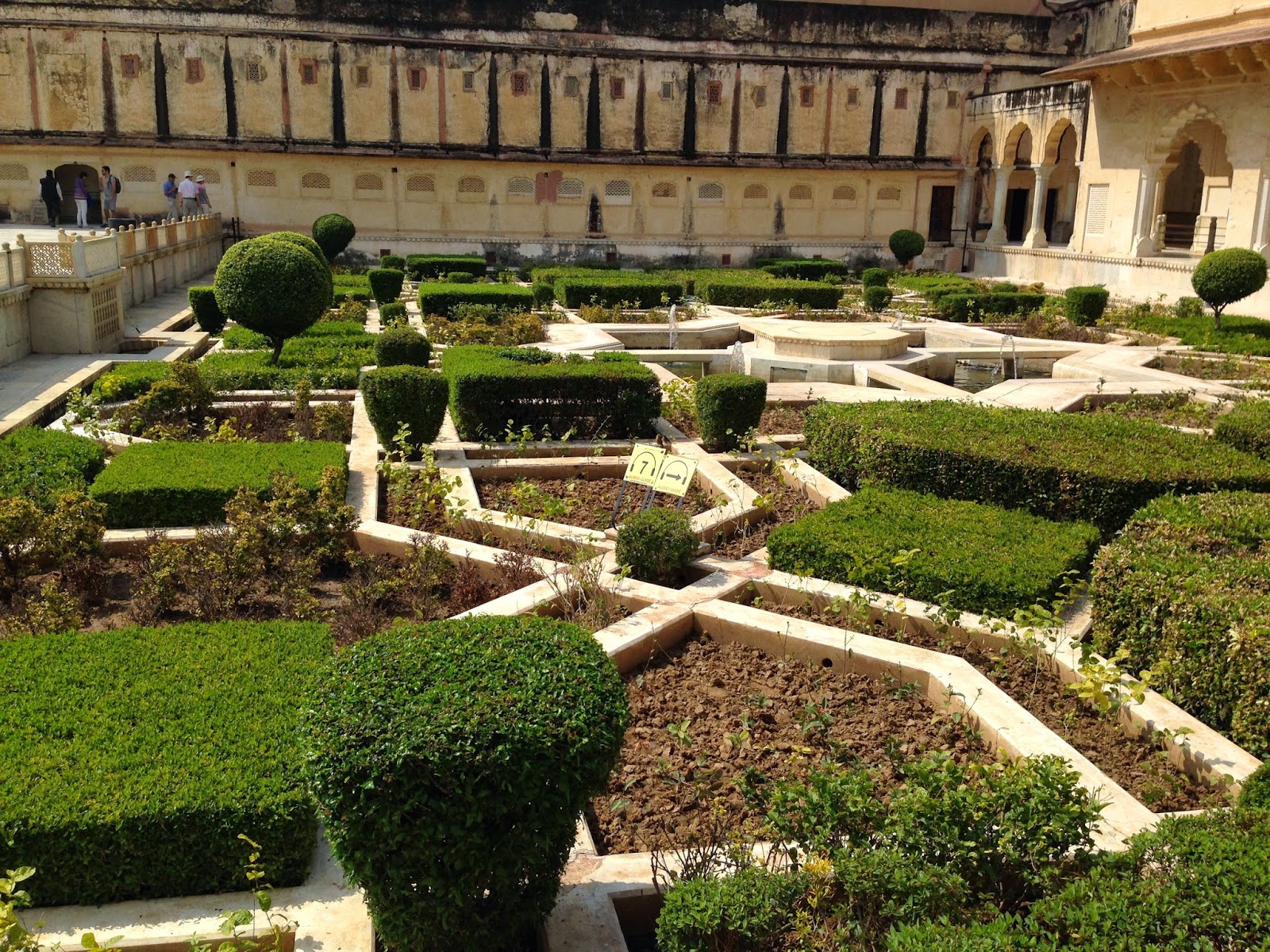 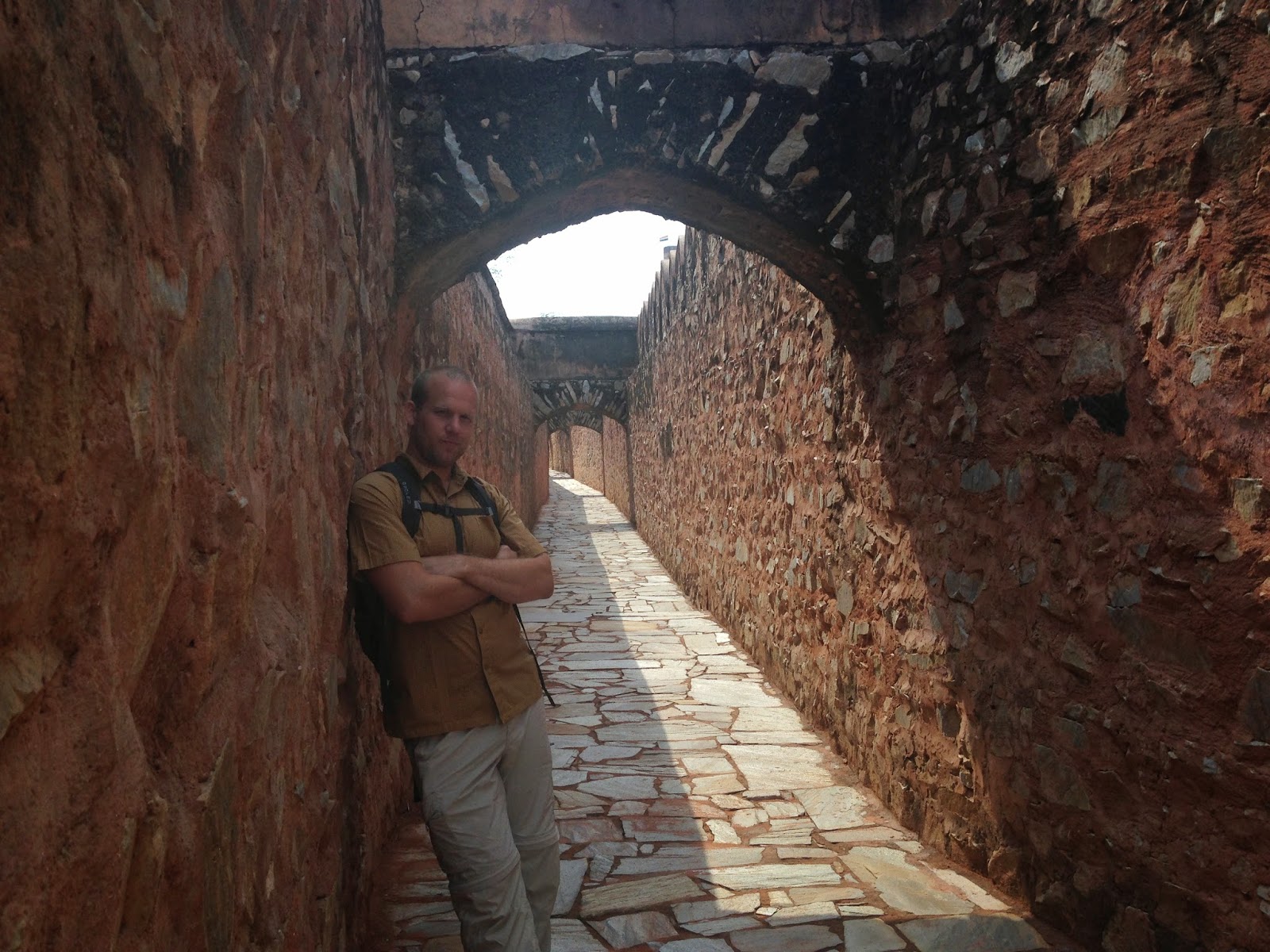 Taking the 'tunnel' from the palace to the fort 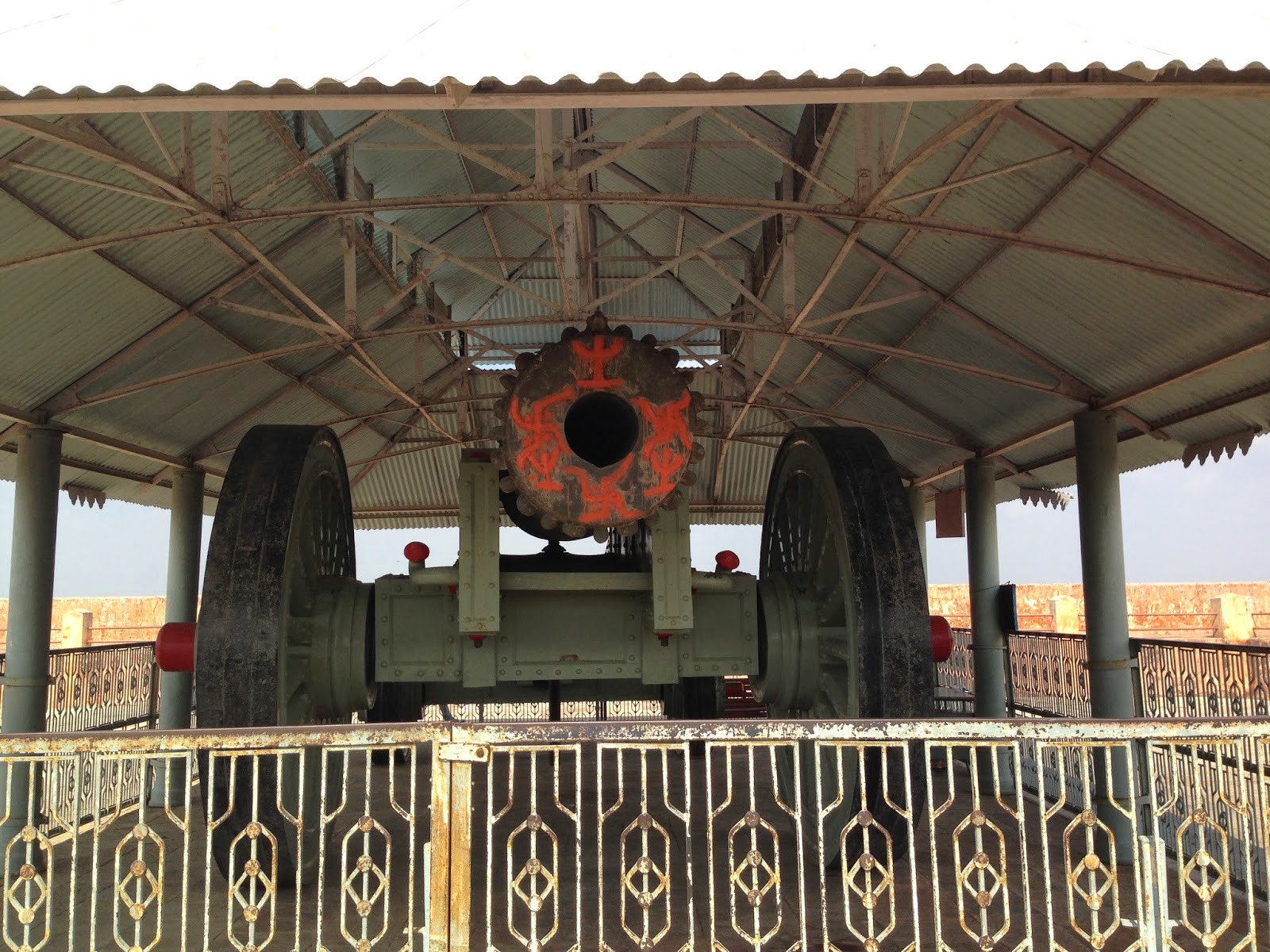 The largest cannon on wheels!


Jantar Mantar is a complex of tools and structures designed for astronomy and astrology. The complex was interesting and definitely different from anything else that we have seen. However, with minimal knowledge of astronomy it all appeared scientifically foreign and it was difficult to understand the purpose of everything, even with an awesome skit-like audio guide. 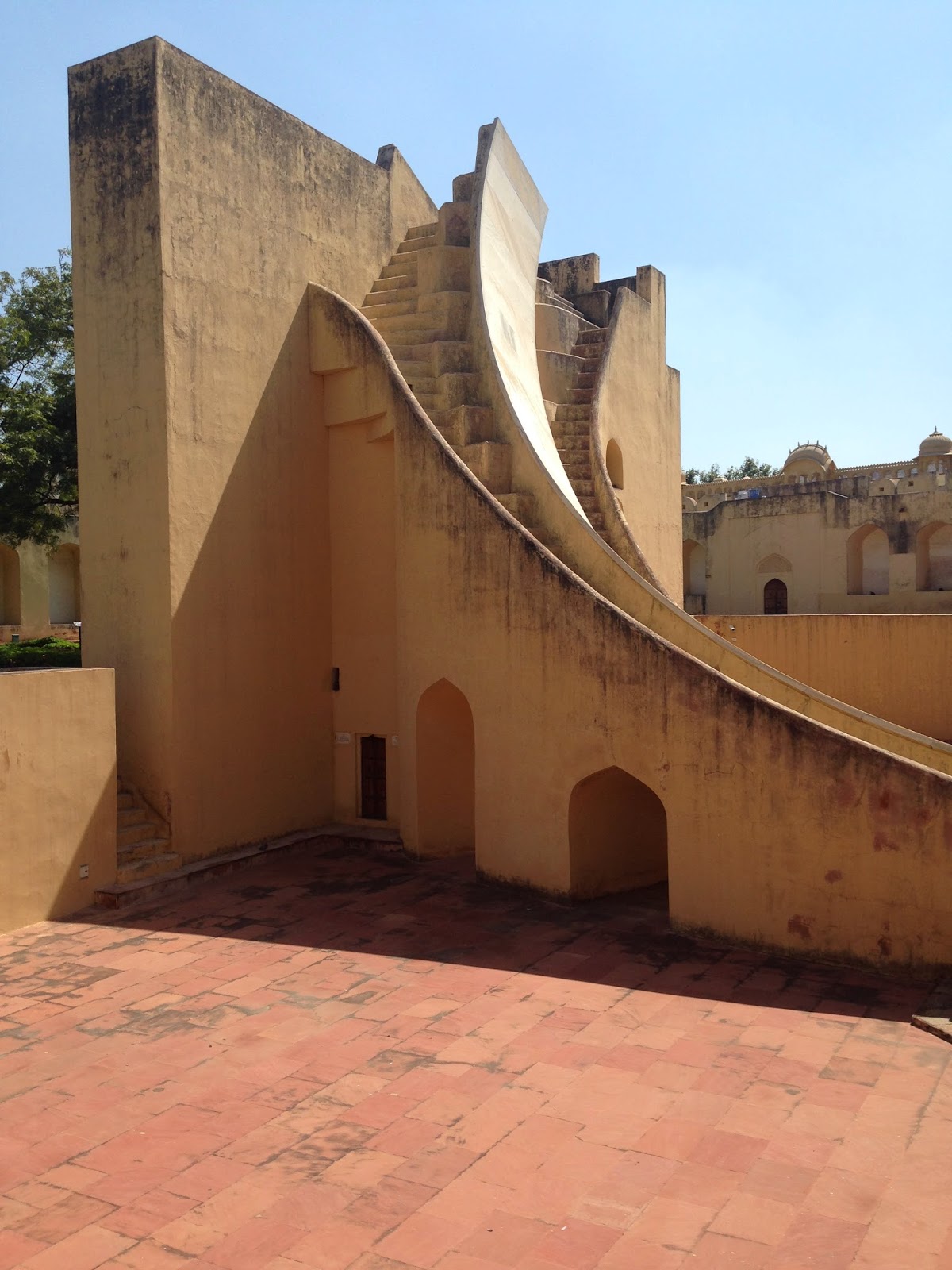 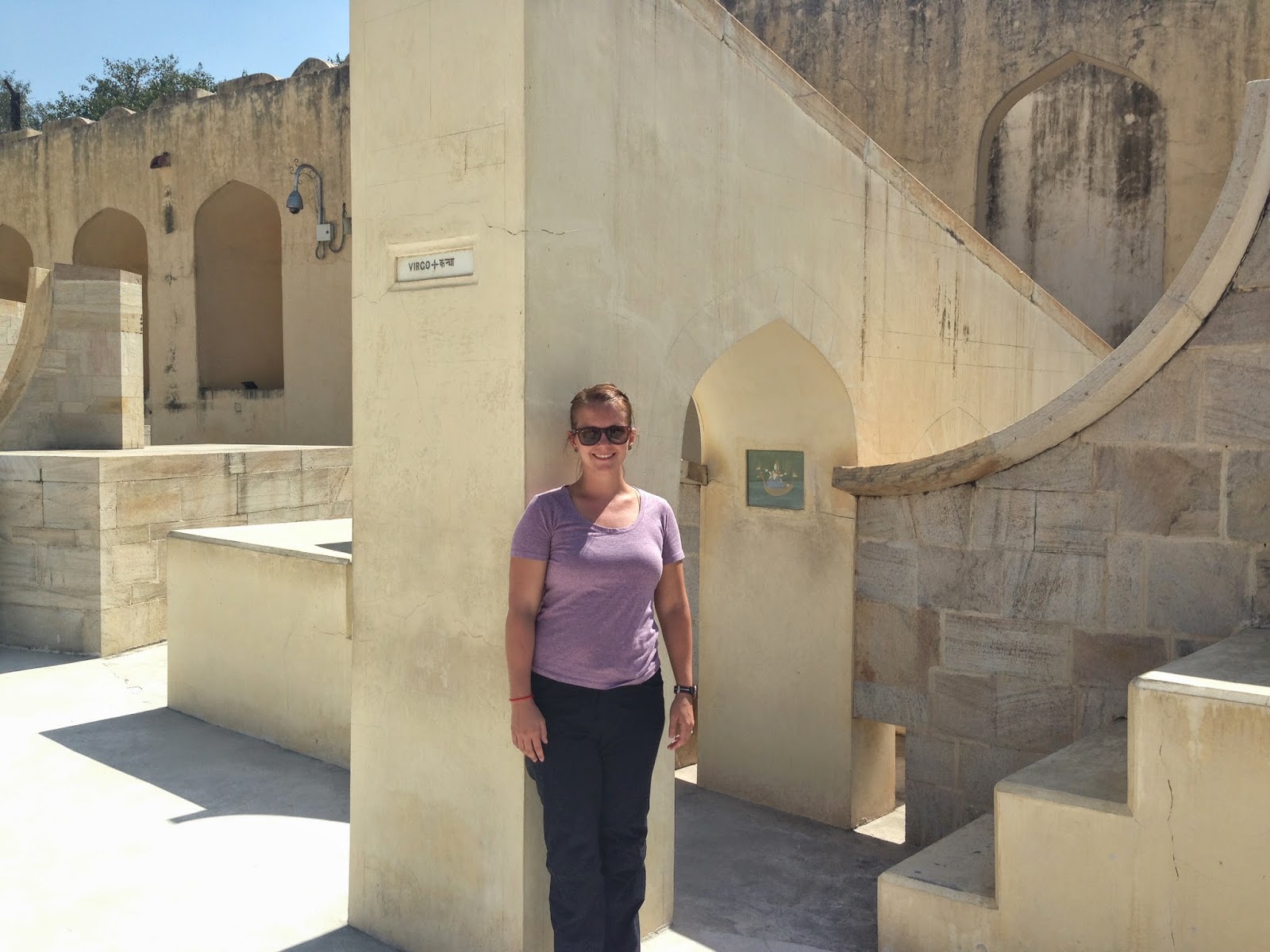 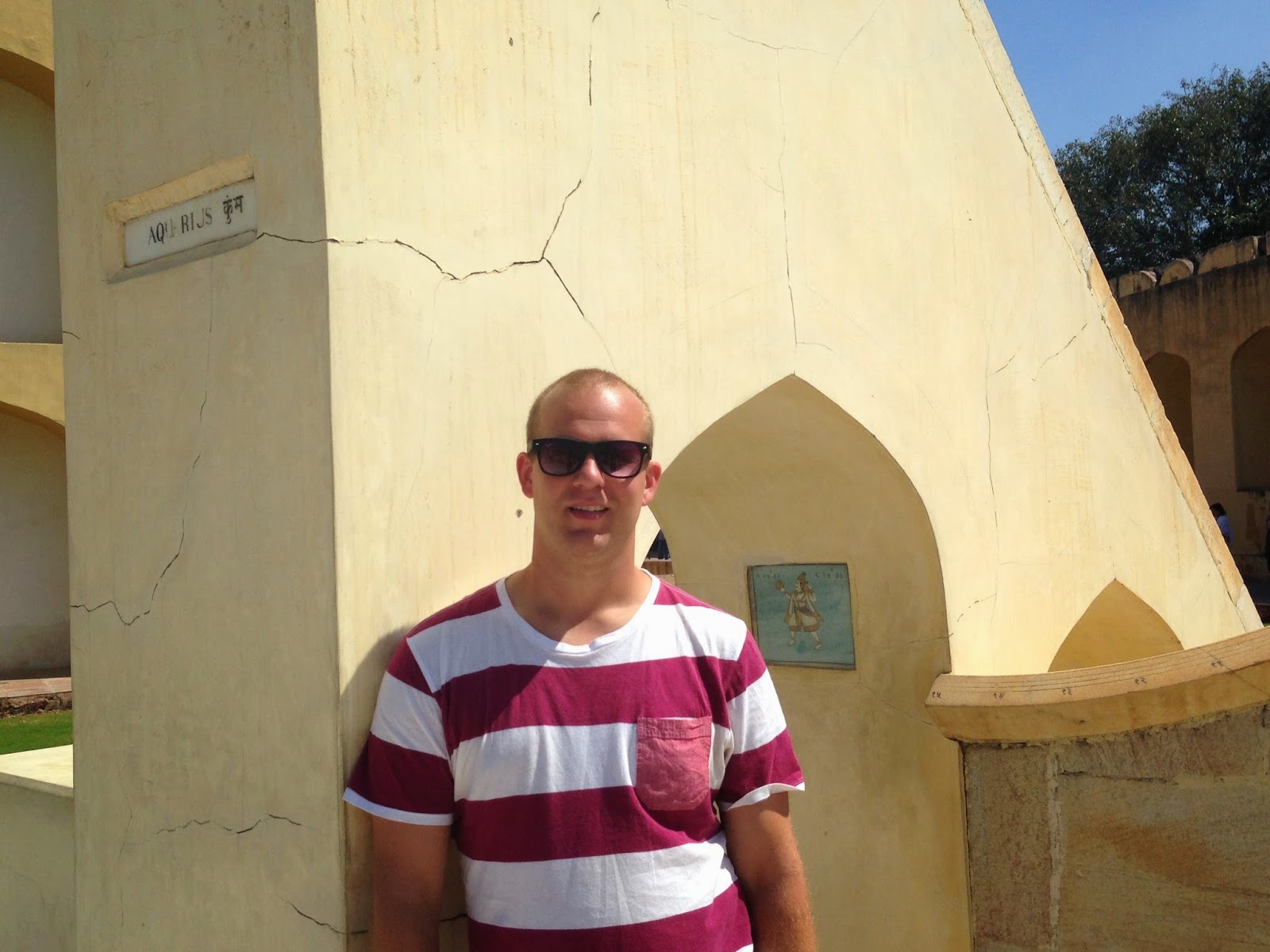 Aquarius!
The royal family still lives in part of the City Palace so we were only able to tour part of it and picture taking was restricted. Hawa Mahal is part of the palace complex that was intended for the royal women and has hundreds of tiny windows which allow the women to look out on the town but remain hidden. It was the most unique building we visited while in Jaipur and very revealing of the cultural heritage of India. 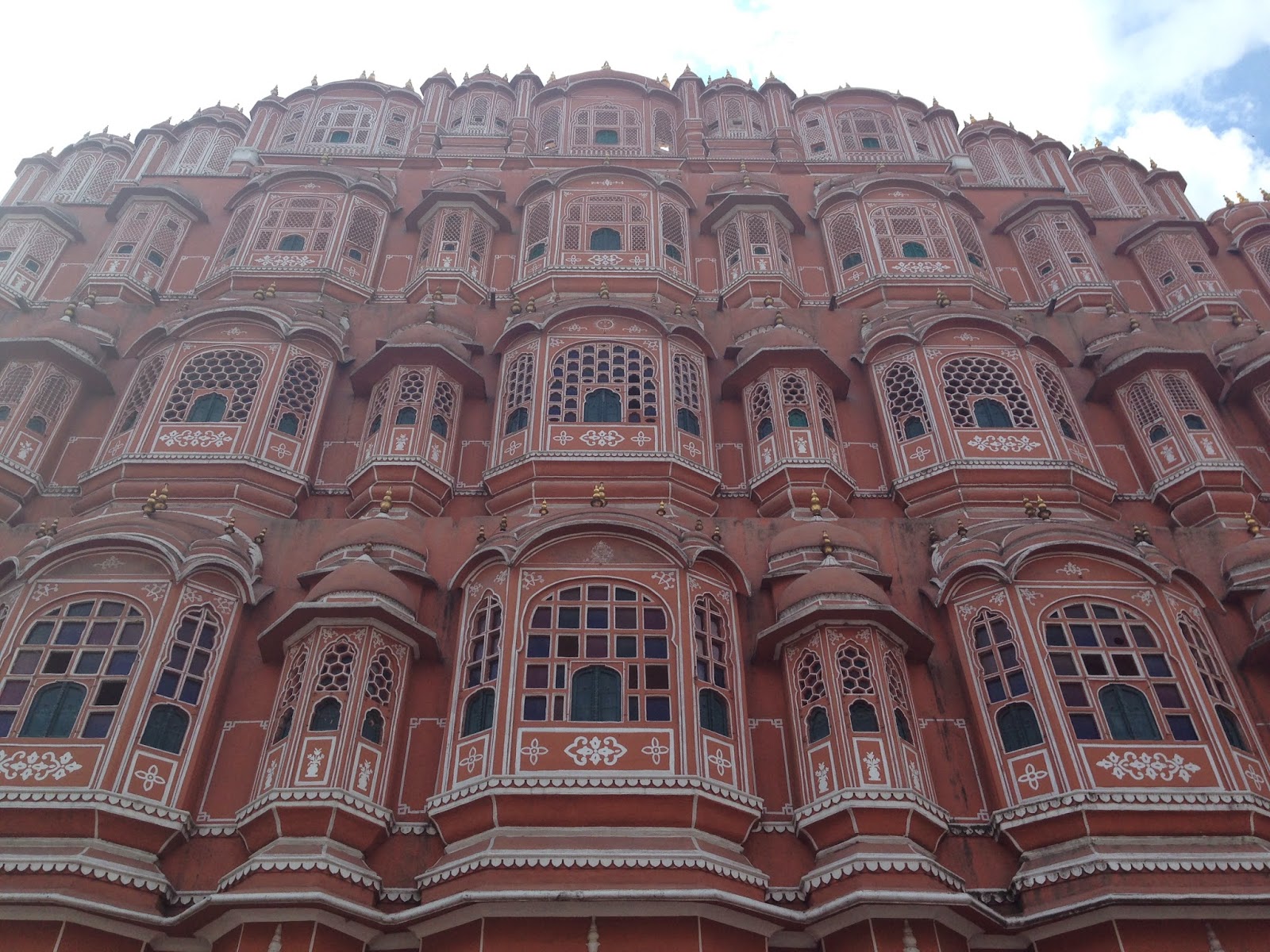 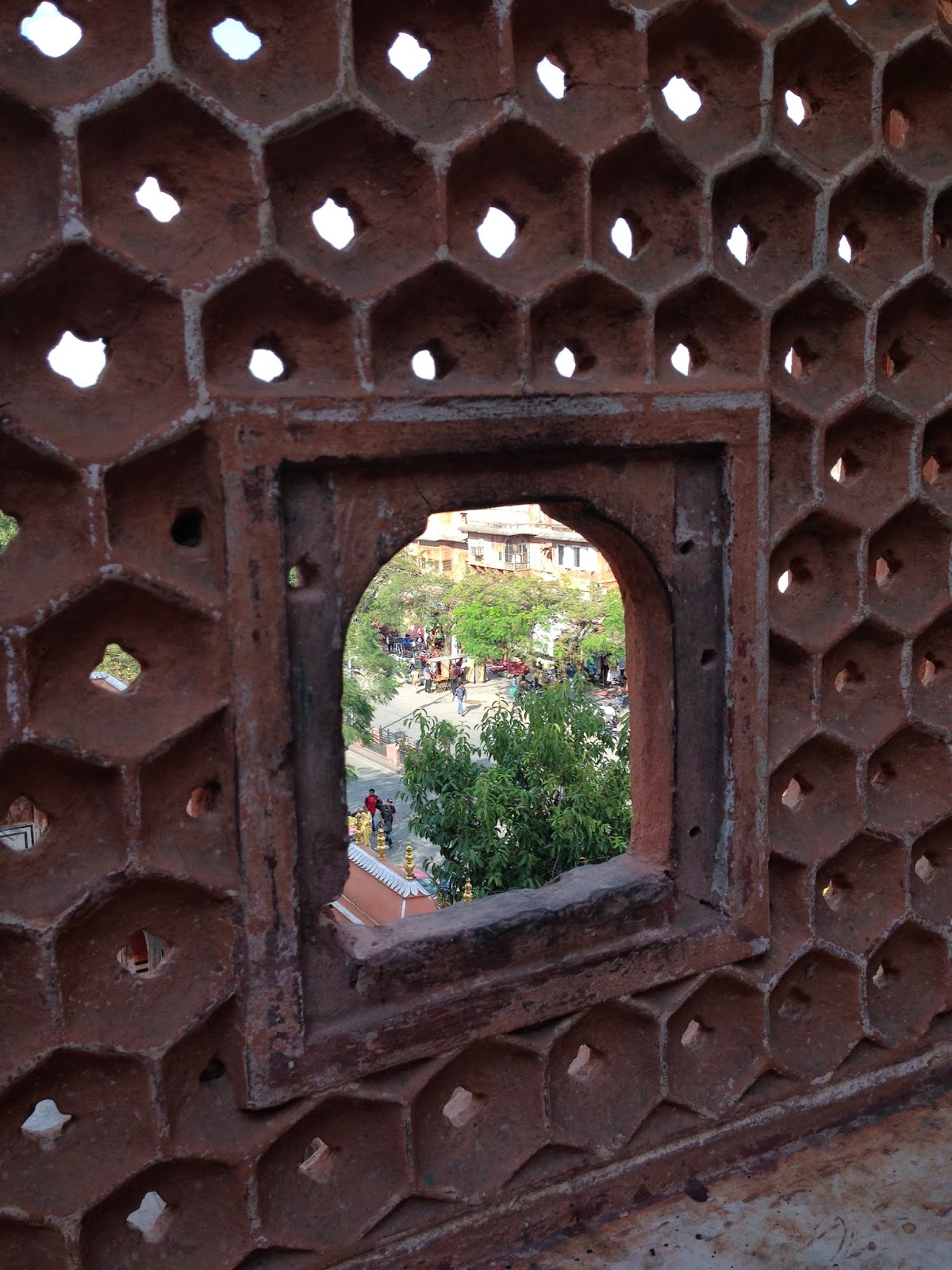 Now you see me, oh wait, no you don't because I'm hiding.


We left Jaipur early in the morning and took a good chunk of the day to travel to Delhi. Don’t worry, we didn’t get Delhi belly- the next post is safe for consumption.