We had a mission upon arrival to Goa. Mission Ship our Shtuff. We have become quite wary of tuk-tuk drivers who, in an effort to get you in the tuk-tuk, say “Oh yes, I know where that is” and then quote you a cheap price. After this cheap price quote one of three things will happen: 1. They actually don’t know where it is and stop to ask around for several minutes then ask you to pay more because it is farther away than they thought 2. They know where it is but as part of their cheap price they try to get you to stop at a shop ‘just to look’ so they can get some kickback 3. They know where it is and take you there with no fuss. Unfortunately, we have been jaded to the point that we prefer to walk if we can. Given Jared’s love of G-Maps and our awesome unlimited international data plan, that is usually something that can happen pretty easily. However, we have also learned that G-Maps is not always up to date. It cannot always be trusted. That’s right, G-Maps is fallible. In this case, DHL was, in fact, nowhere near where G-Maps thought it was. We didn’t discover that until the next day though because we eventually gave up the search. We had not booked a room in advance so we sat in a café with some lunch and a much needed Kingfisher and found us a room. And what a room it was! It was a little piece of hotel heaven, just a mile from the beach with a pool, an on-site restaurant, cable and wi-fi. We spent that night in the pool and filling our bellies with delicious, delicious Indian food. The next day, we took a taxi for a tour of Old Goa where there are several old churches. 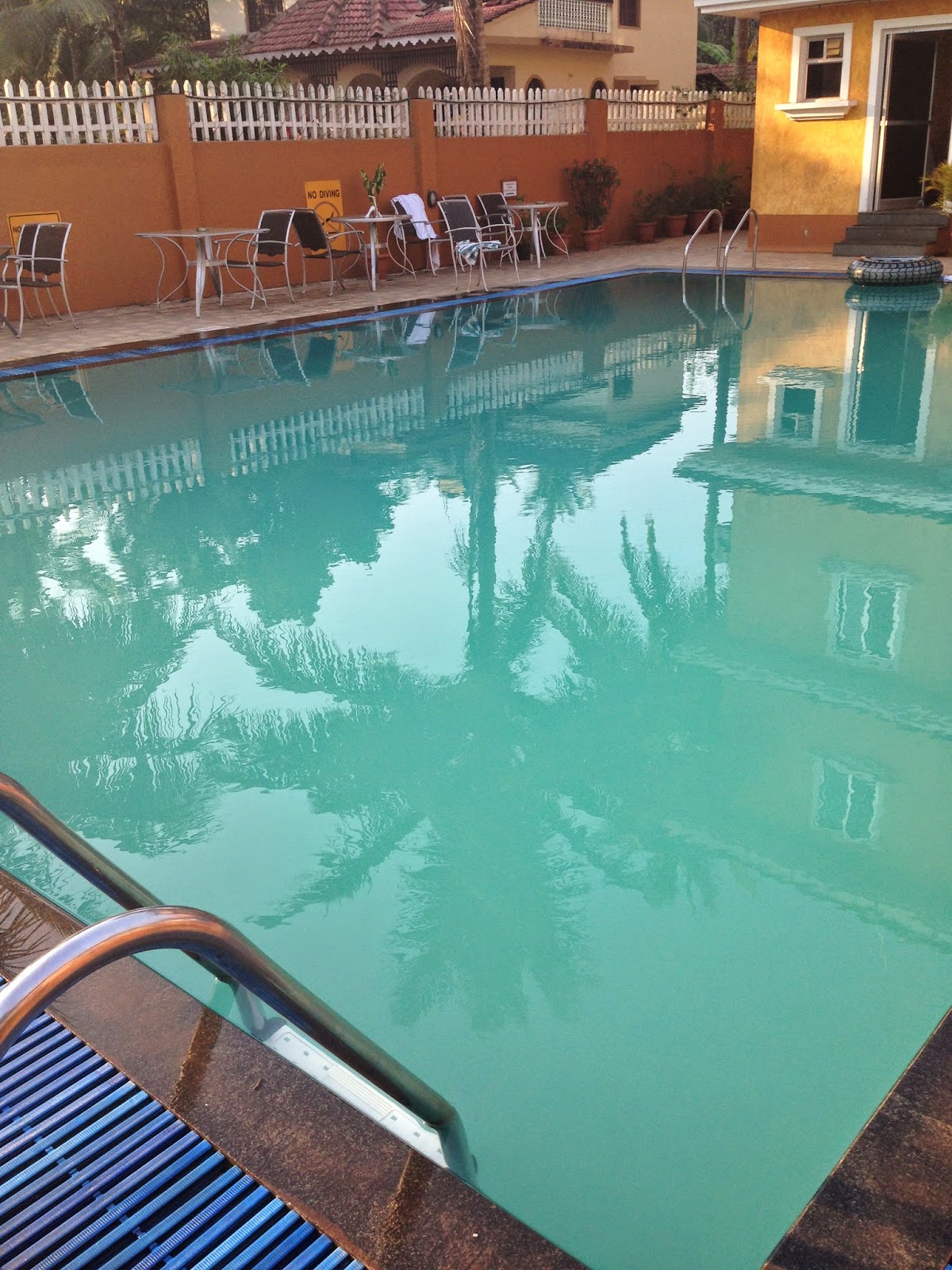 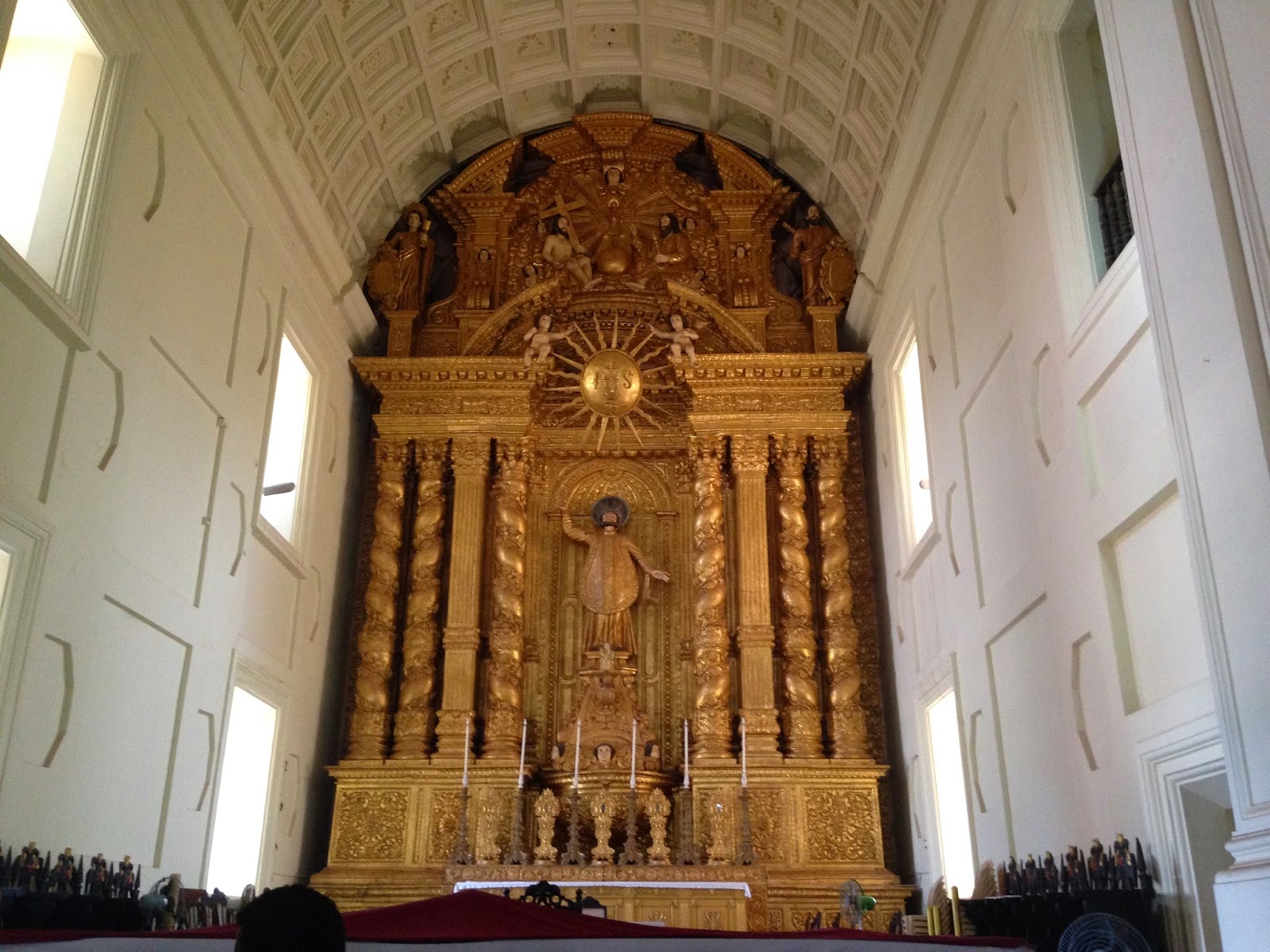 The Basilica of Bom Jesus (that means baby Jesus) It is the oldest church in Goa. 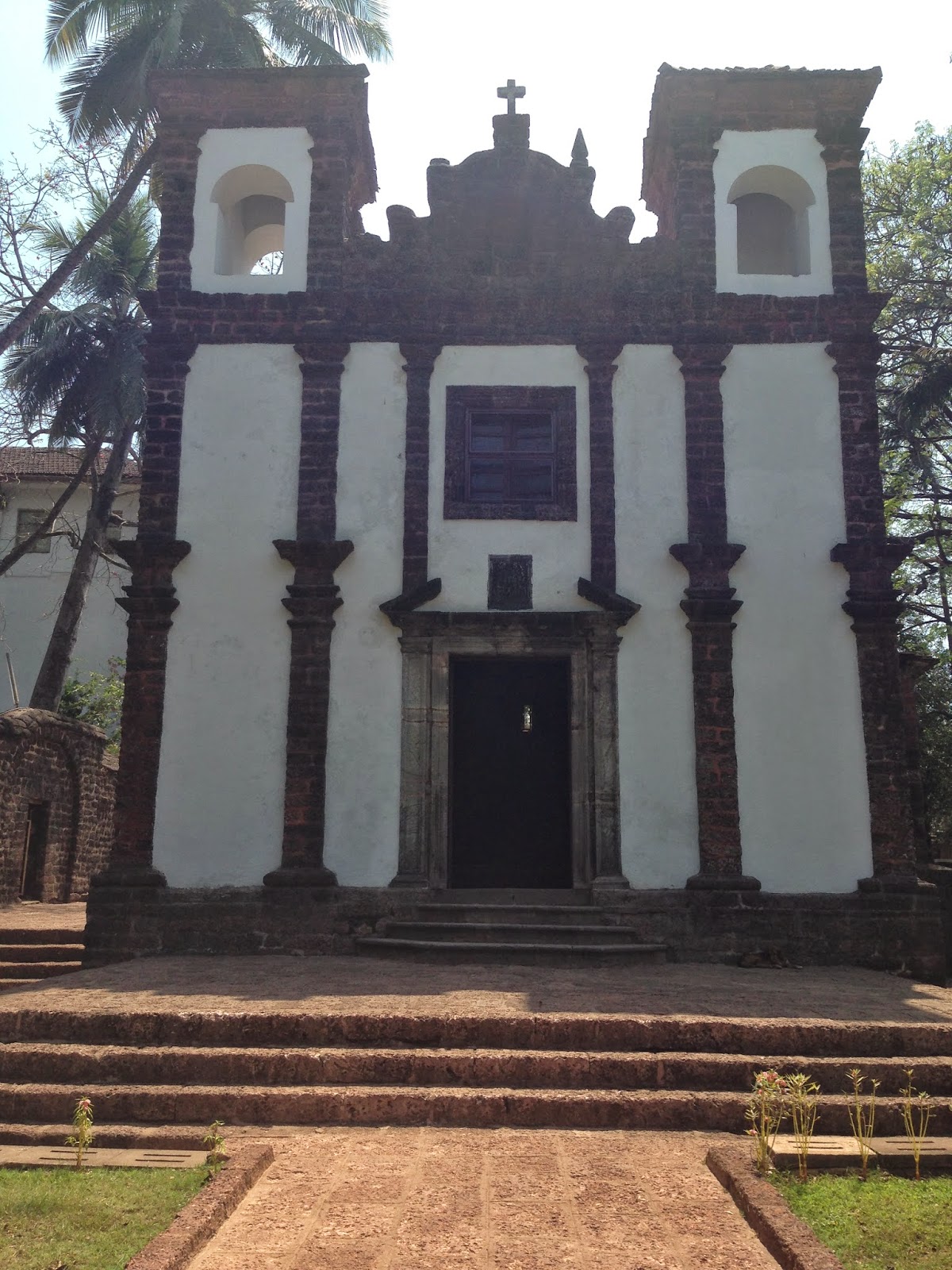 The Chapel of St. Catherine. This is a restored small little chapel and the inner sanctuary is all brick 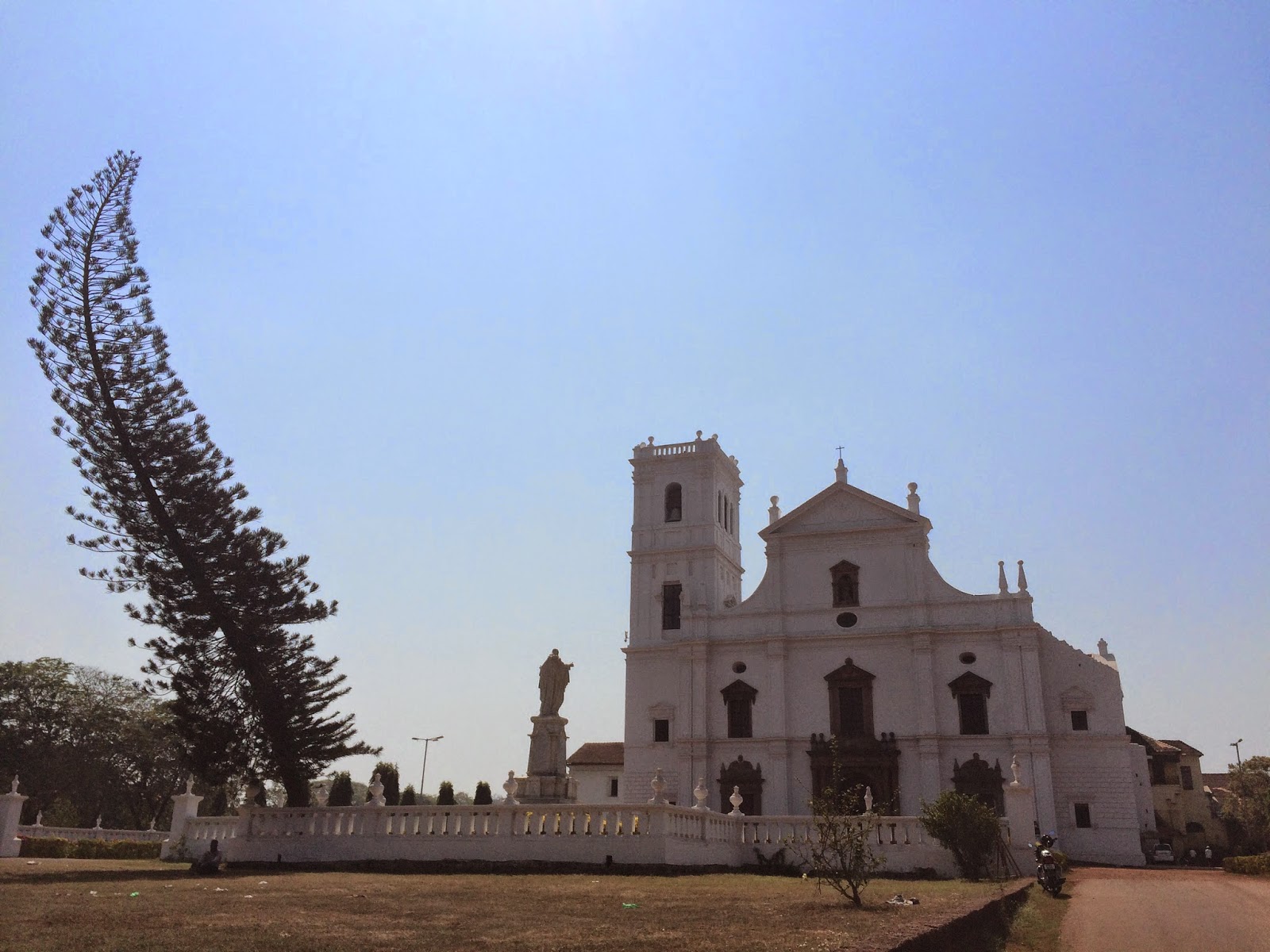 Se Cathedral. This crazy leaning tree complement the single bell tower well.
Then, of course, we spent the night in the pool, eating food and listening to a one man karaoke band! He had some great renditions of Western favorites which with which we happily sang along. We had to leave Goa the next night so the following day we decided to check out the beach. It was such a lovely beach. Nice and quiet with very few tourists. The tourists that were there were Russian. This population was so common, in fact that the signs at the little huts behind us were all in Russian. It was an interesting change from the typical tourist population. As for the beach and swimming, the waves were bigger than in Thailand and made any kind of water experience more like a wave pool and less like a float pool. But we had a nice time relaxing for a few hours before leaving on our night train. This awkward-after check out-before train departure-time was spent in our hotel room, as they let us pay for a half day so we could still shower and eat before heading on to Mumbai. 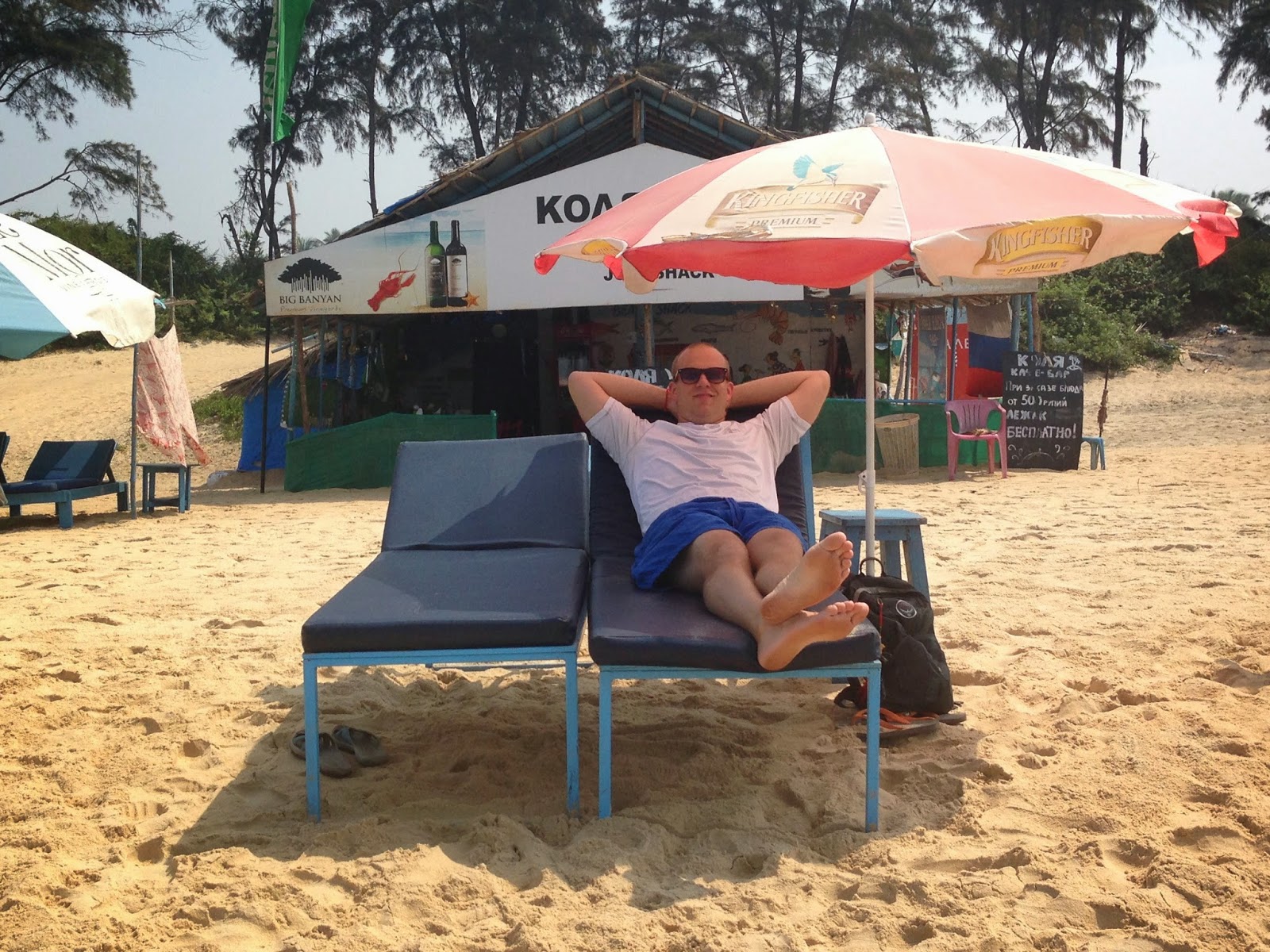 Relaxing on the Russian beach in Goa. 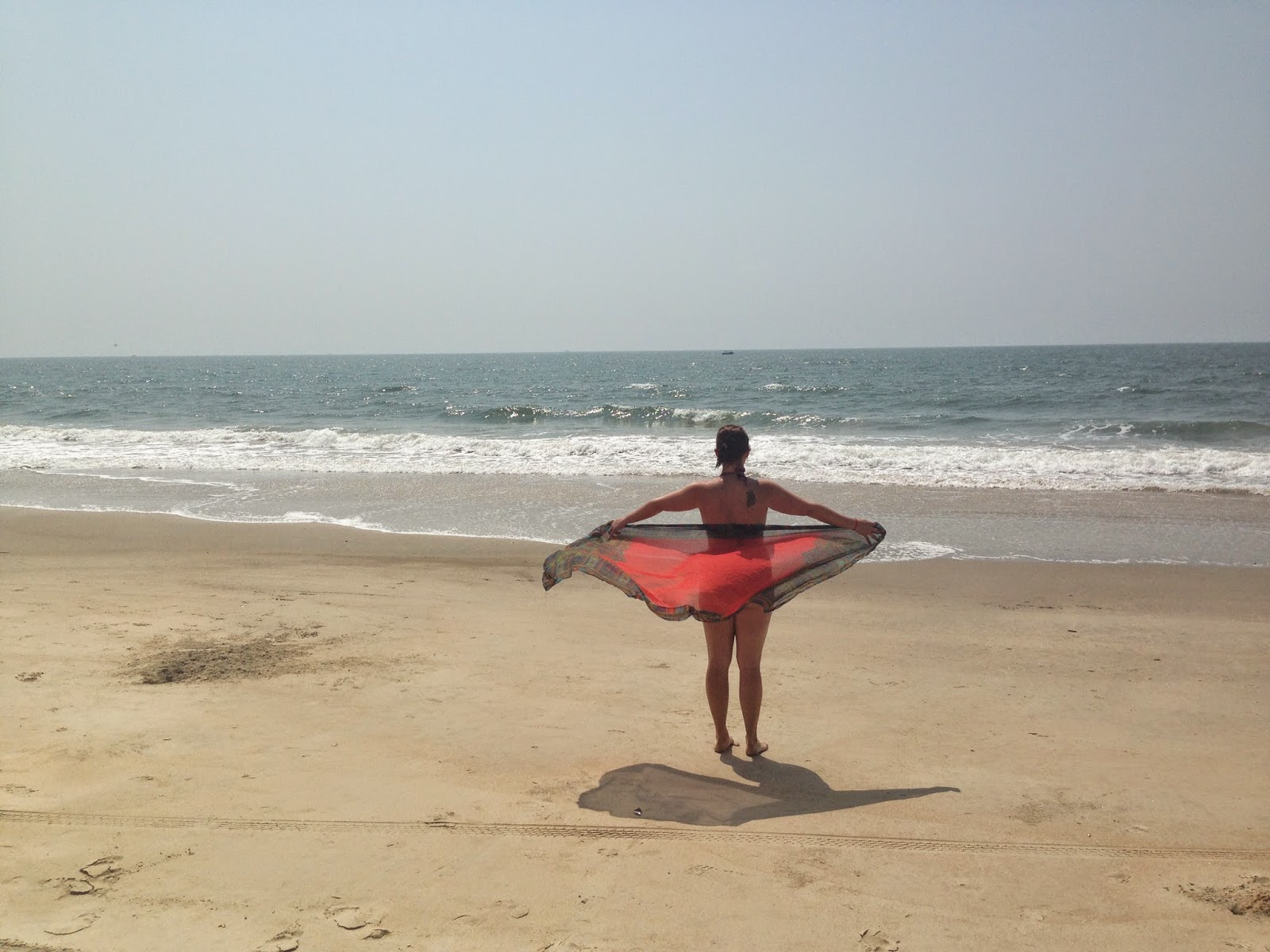 Sarong flowing in the wind, waves crashing at my feet and sand squishing between my toes (I made Jared take an 'artsy' picture).


Leaving our Goa retreat was tough but we had good ole Bombay beckoning us from the North so, we had to move on.
Posted by Christy at 3:39 AM