Our train to Mumbai was muy mal. That is Spanish for very bad. Not only was it an hour late to arrive to our station (no one wants to sit at a train station for an hour) but it then accumulated another 3 hours of lateness making our total travel time 14 hours instead of 10 hours. For realz. That is 14 hours without adequate food, since we were warned off the train food by some fellow Americans, we have been packing our own provisions for train travel. We were anticipating being able to eat breakfast, off the train, at like 6 am, so we did not pack very much food. We were both pretty hungry when we finally made it to our hostel. I guess it could have been a lot worse, we could have had a loud, stinky neighbor. We could have derailed or been delayed even longer. Maybe it wasn't muy mal, just mal.

After breakfast we started our tour of the city and headed to South Mumbai to walk around the old buildings and to catch the ferry to the Elephanta Caves. Historians are not sure when or by whom these caves were constructed, but they believe it was between the 3rd and 8th centuries. The caves are Hindu shrines and are primarily dedicated to the god Shiva. It is an hour ferry ride and then a trek to get to the top, but the caves (especially the main, most well-preserved cave) are quite impressive. 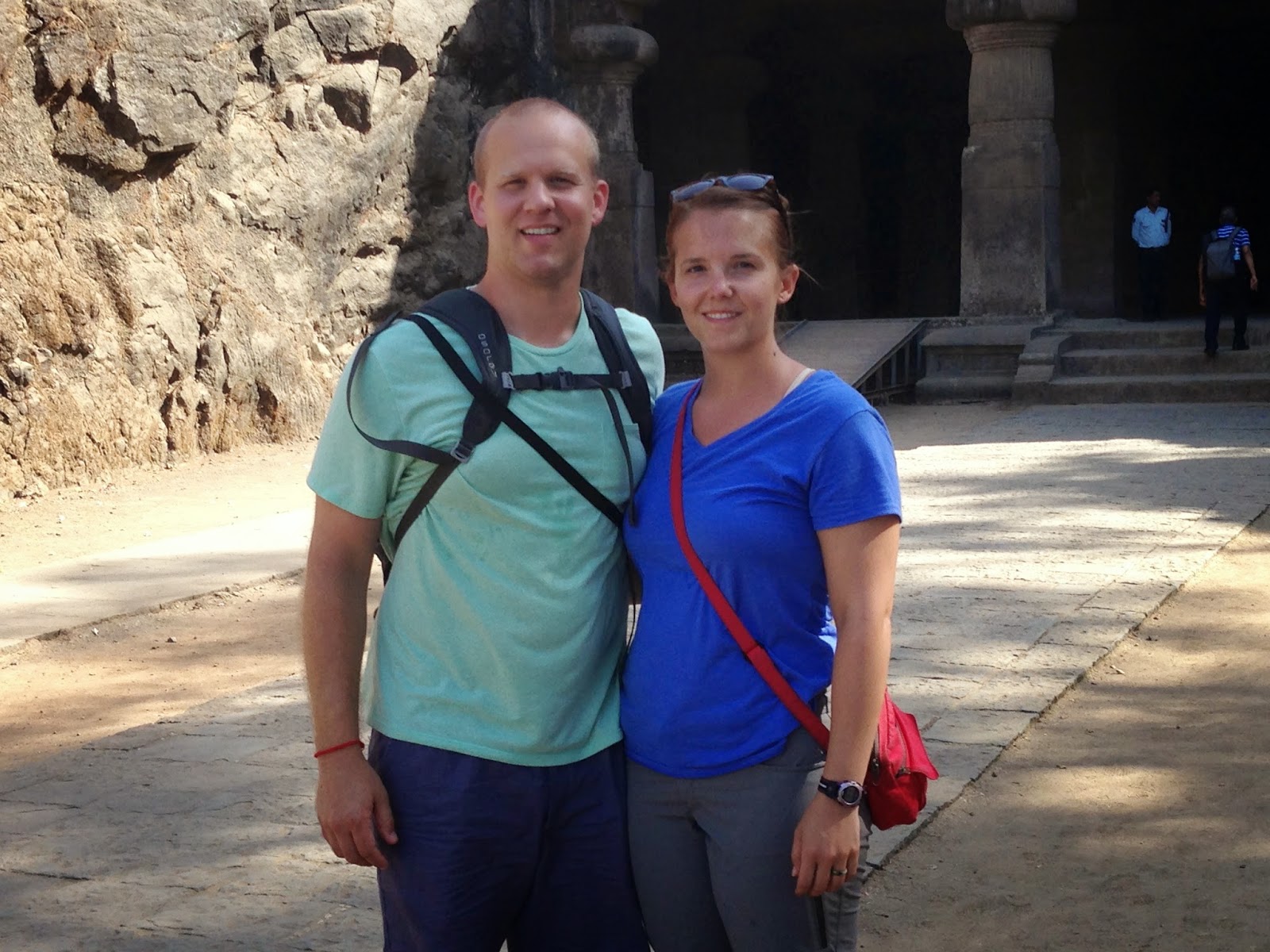 At the entrance to the main cave. 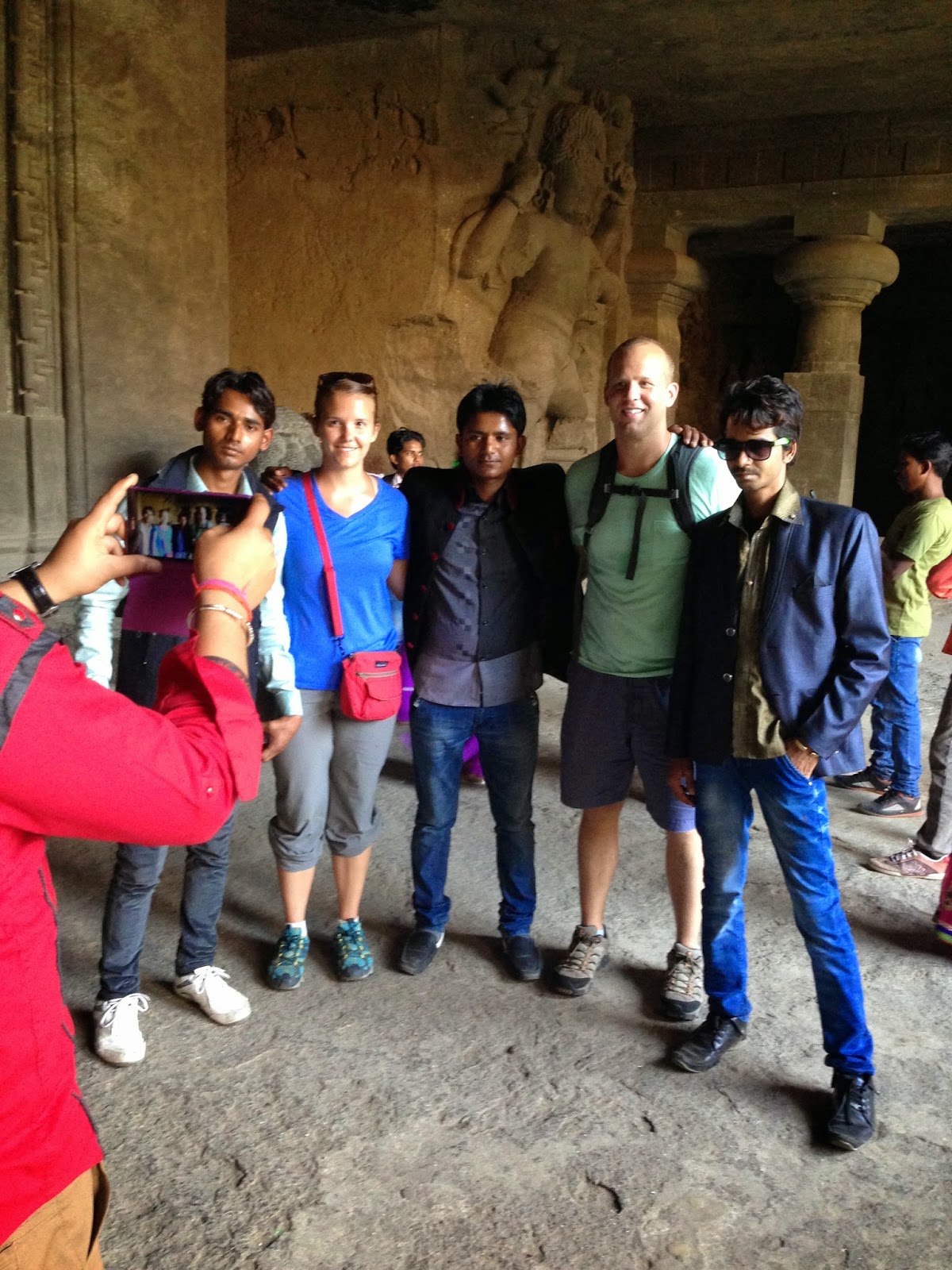 Remember how I mentioned Indians taking pictures with us? Here is one of those pictures. This was actually more like a photo shoot because there were four of them and we took a number of pictures with various combinations of people and arrangements. 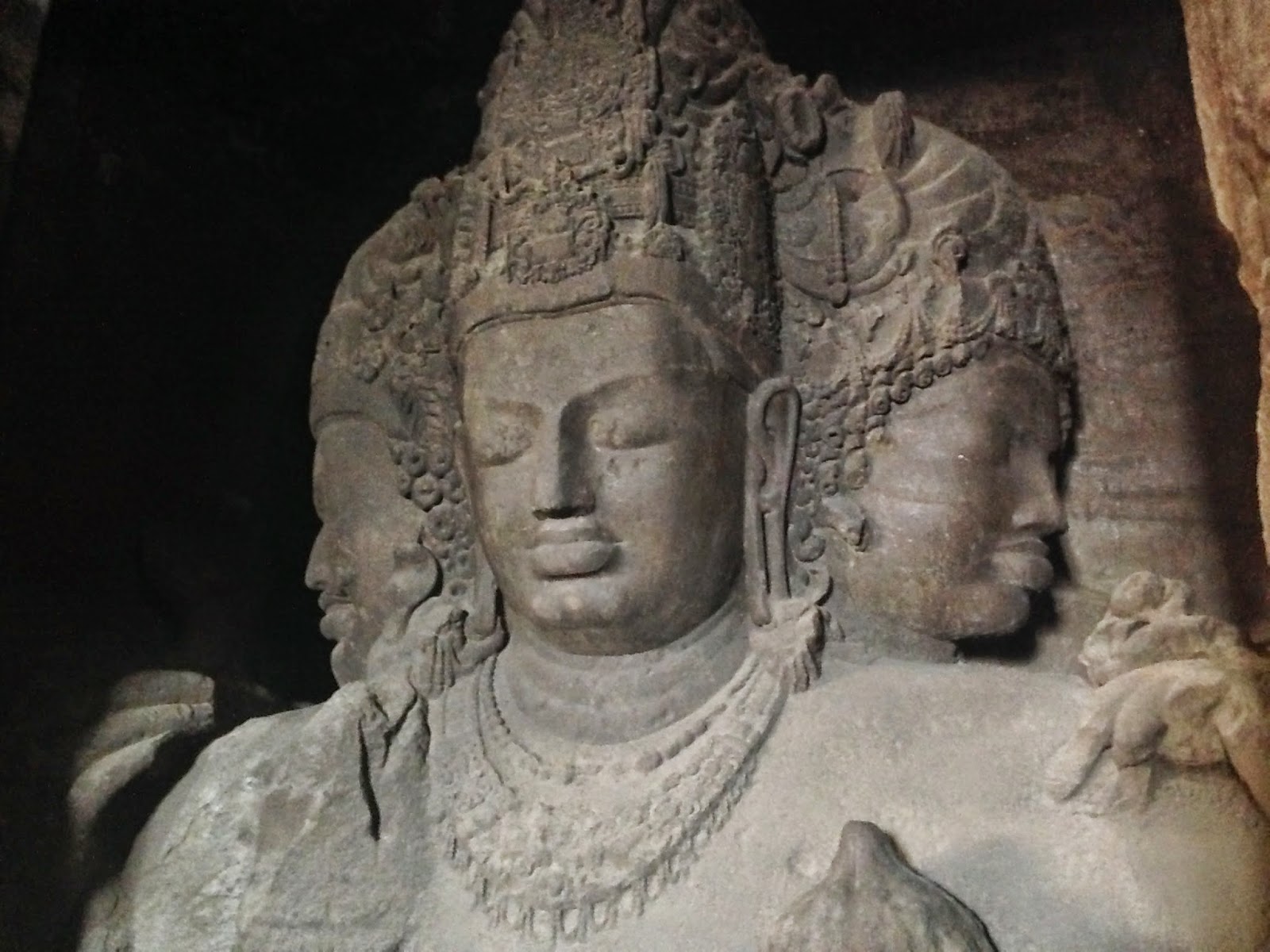 The Trimurti sculpture which shows the three aspects of Shiva. Scale not shown but this is almost 20 feet tall. 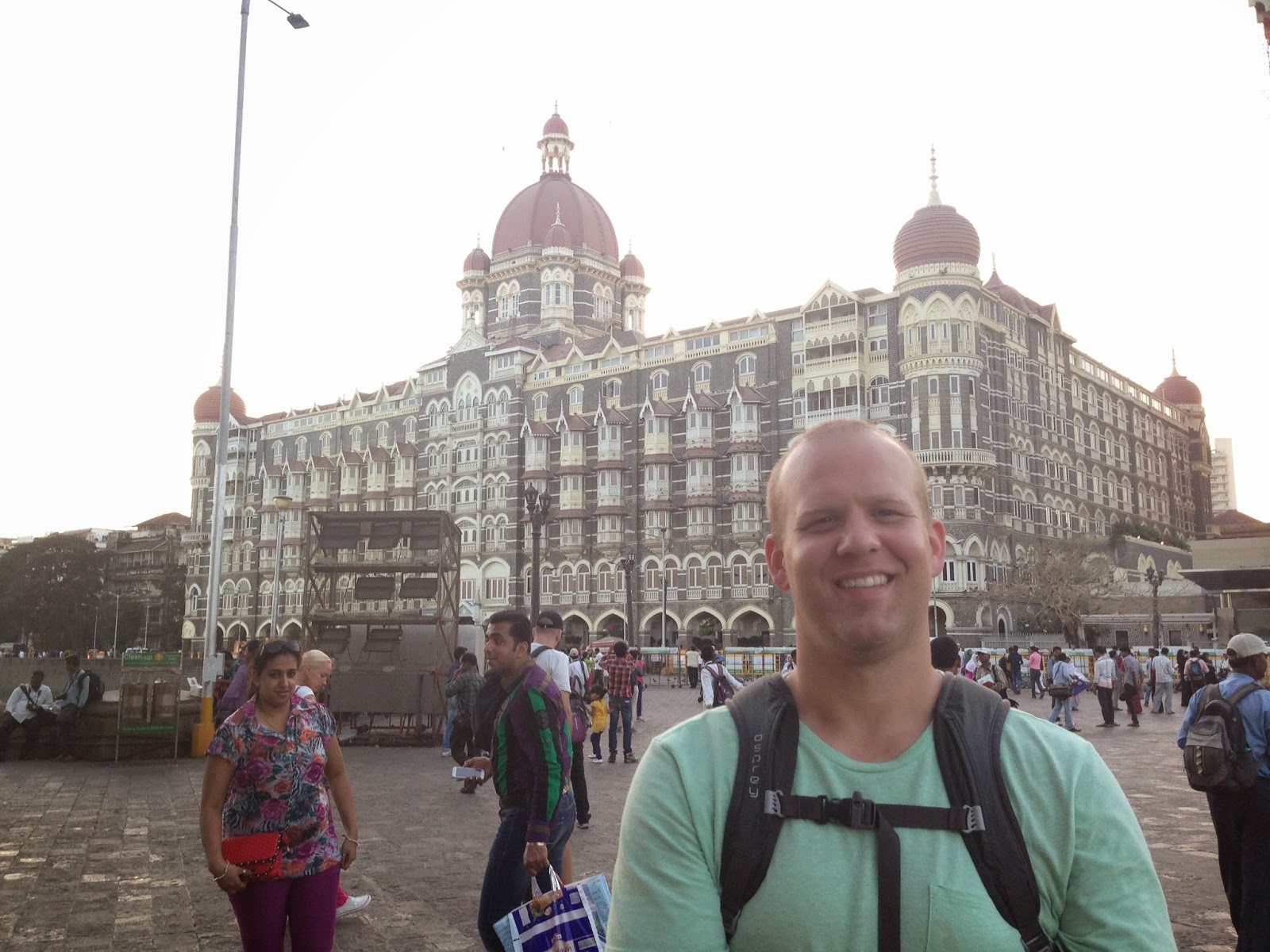 Jared in front of the famous Taj Mahal hotel. 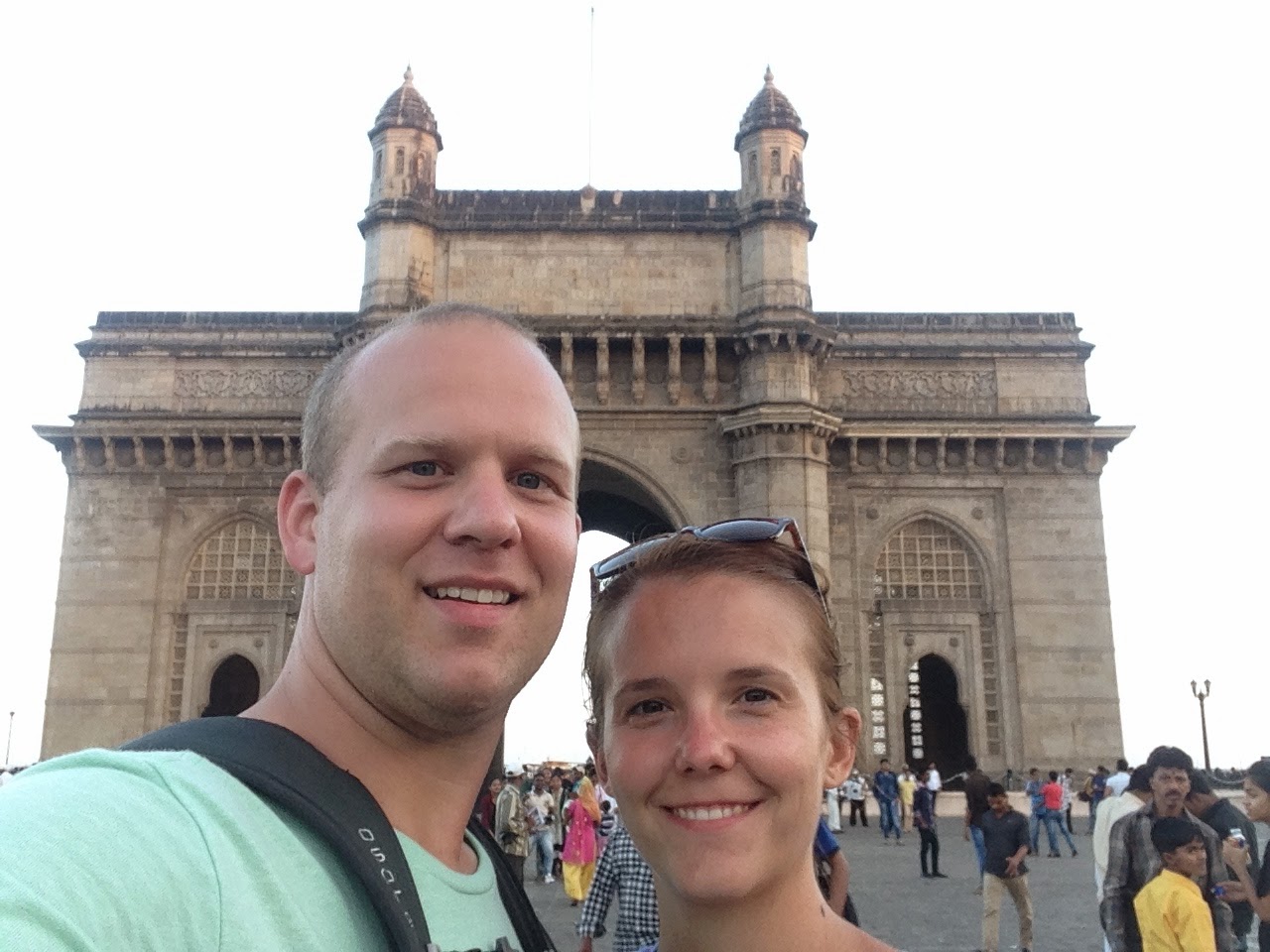 The Gateway of India, built in 1911 to commemorate the visit of King George V to India. It is also the gate through which the British soldiers left when India gained its independence.
After the caves, we did a little shopping and then headed back to the hostel. We made a reservation for a cooking class on-line for the next day. Finally, we could learn the secret to the deliciousness. However, when we woke and inquired at our front desk about getting a taxi, we learned that in order to get to that class it would take about an hour and a half to go about 15 miles. This did not jive with our day plans so we cancelled that class and went with a suggestion of the hotel staff. This cooking class was through a company called Mystical Mumbai which was started by a PhD student from the slums. All of the tour guides also are from the slums and are attending university. It sounded like a different, unexpected experience. And, it was. We met the owner of the company and he informed us that we would be meeting up with another tourist at the house of one of the guides. We would be learning about cooking Indian food from the guide's family. His Aunt, Uncle, Mom, Dad, Grandparents and miscellaneous nieces and nephews were there and were all kind and inquisitive. We got to watch the women prepare the meal from scratch and were able to ask questions about ingredients and methods. It was a really great experience which not only allowed us to learn about cooking Indian food but also about Indian family life. 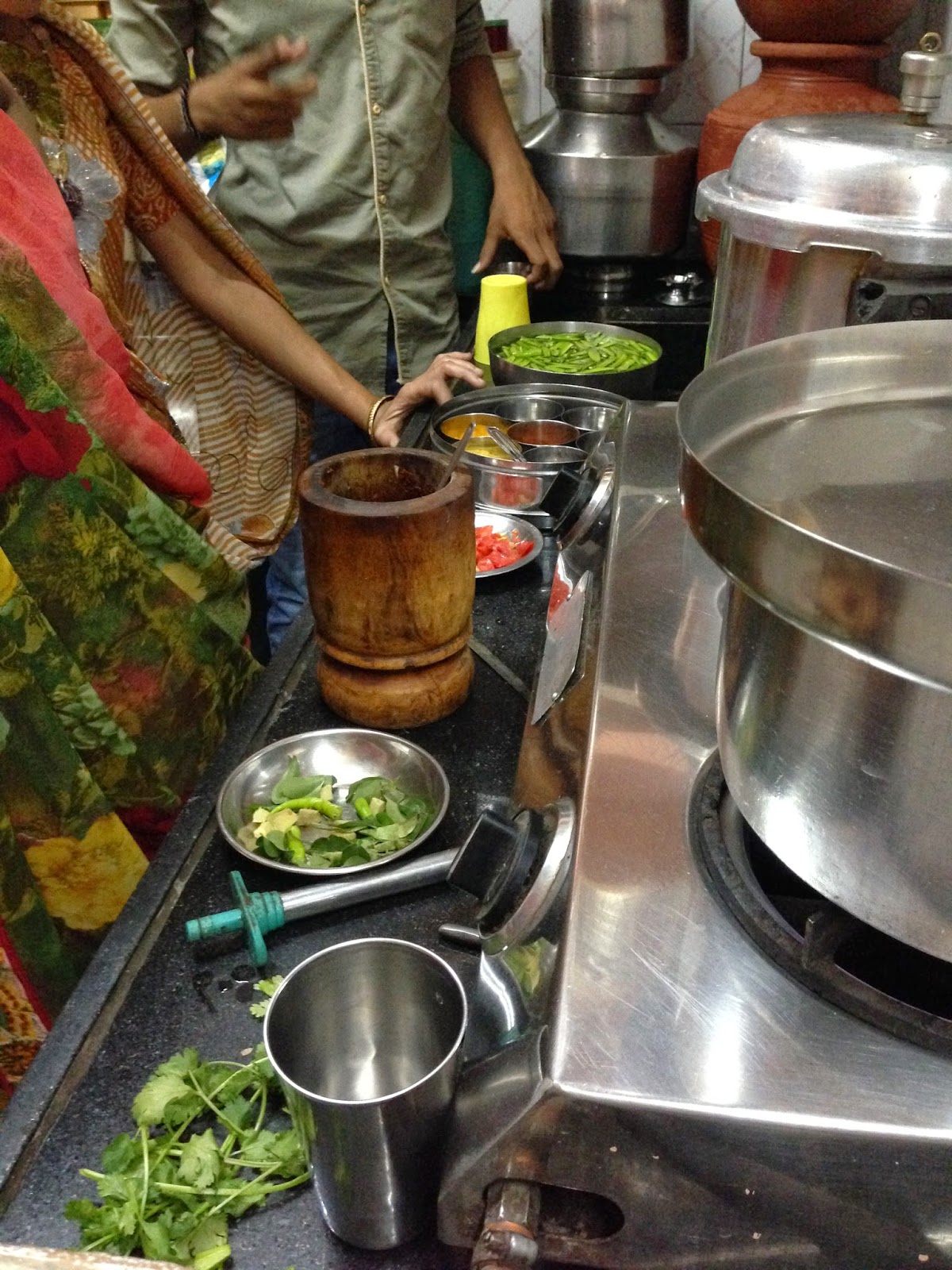 Preparation of some of the food. Lots of colors, fresh spices and herbs. It was a fun, delicious day.
After our bellies were full with our freshly prepared meal we went to Mount Mary's Basilica and then to the Shree Siddhivinayak Temple. This temple is described as the most important Hindu temple in Mumbai, but is not a "tourist" temple and it was overwhelming to enter the area as vendors were everywhere yelling at us to come take off our shoes and to buy offerings for the temple. We had to go through security and were not allowed to take pictures or video. We finally made it to the official ‘take-off-your-shoes’ stand and did so. When we entered the temple, which was built for Ganesh, we were again overwhelmed with lines and people. It was by far the most active Hindu temple we had been in and we felt very privileged to be observers in their holy place. In the rush of the crowd and in response to the directions of the temple volunteers, we found ourselves at the front of the altar and a Hindu holy man gave us both a bindi (the mark on the forehead) and a pile of flowers and some sort of cookie. We weren't really sure what to do with either. Even after looking around to see what other people were doing, we couldn't quite figure it out. I won't mention what happened to these items. We witnessed several different acts of worship and we are uncertain as to the meaning behind them all but it was a great experience, nonetheless. That evening we did some shopping and then found a nice little pub with locally brewed beer. It was a spontaneous, well-spent day and our last in Mumbai. 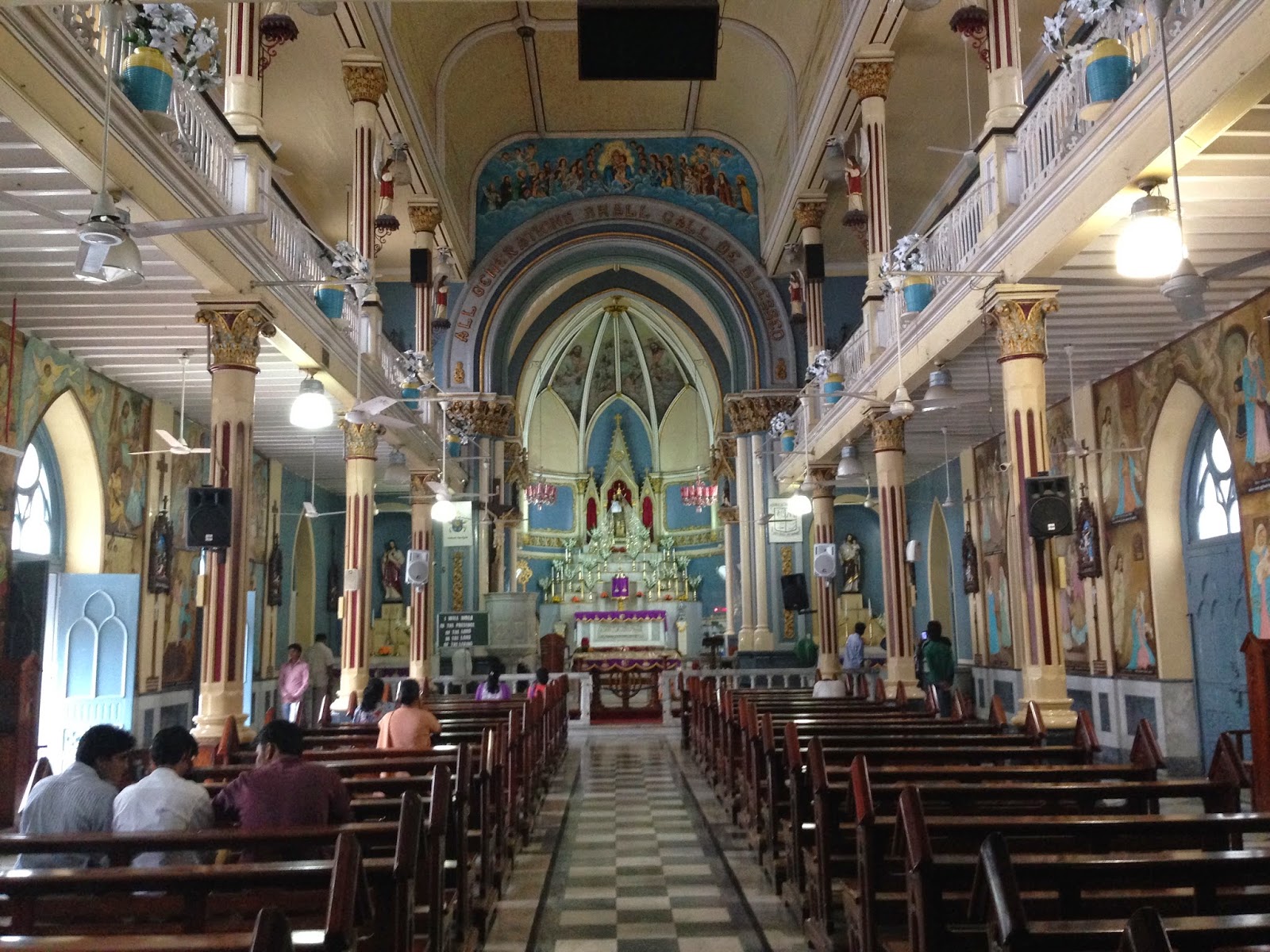 Mount Mary's Basilica. The first altar was built here in 1570, it has been torn down and rebuilt several times but is still considered one of the oldest churches in Mumbai. The light blue on the walls and in the paintings is very beautiful. 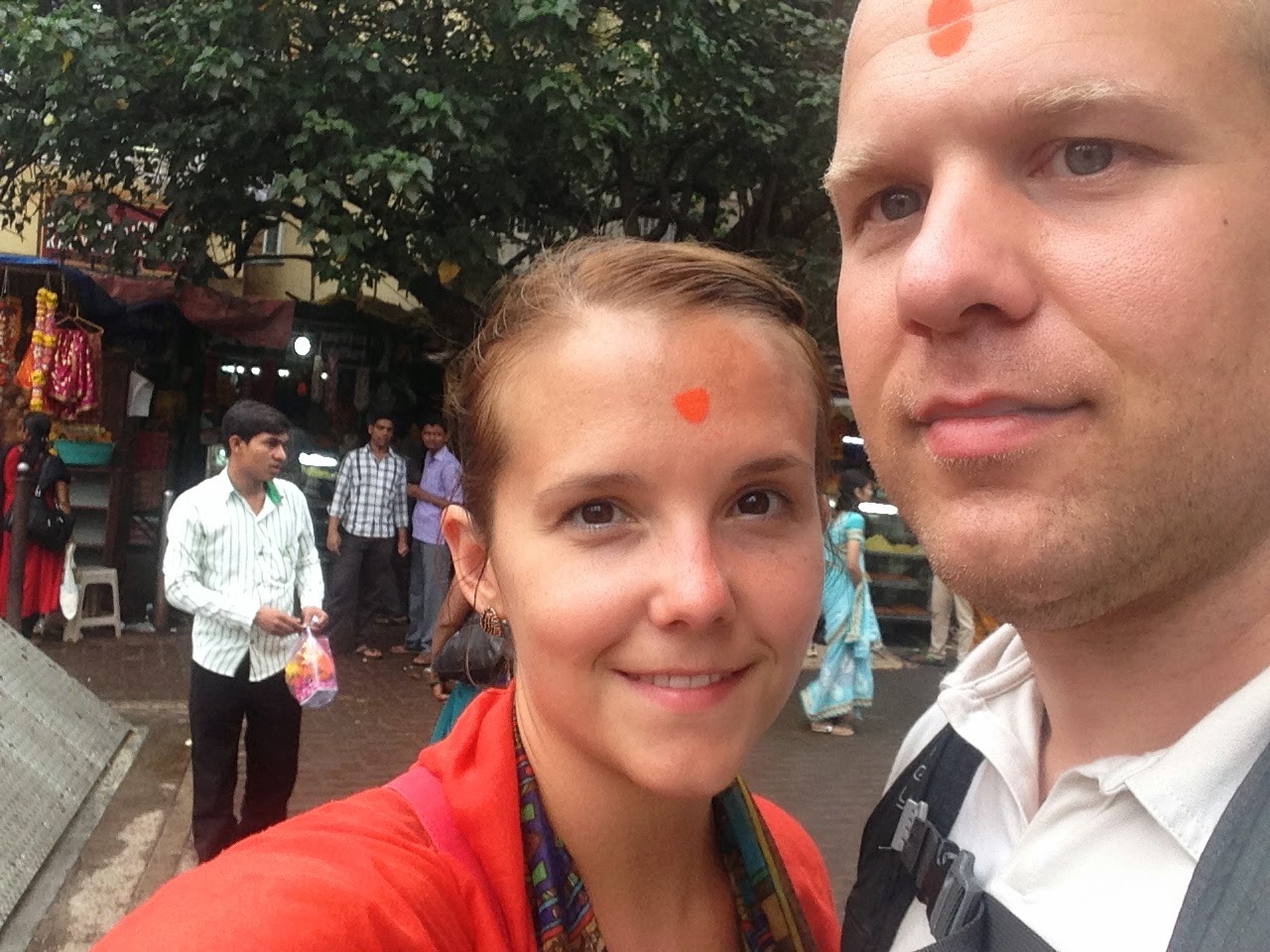 Us with our bindis. It is not allowed to take pictures of the temple inside or outside so we don't have any of those.
From Mumbai we flew to Udaipur, the Venice of India!
Posted by Christy at 6:33 AM