By the time we arrived in Delhi we were master negotiators with tuk-tuk drivers. They swarm you as soon as you walk down the stairs from the train platform. We’ve started stating our location, confirming driver knowledge of location and then saying how much we will pay. That is the bottom line, we don’t waver. If they don’t agree we just keep walking. So, I guess we aren’t master negotiators so much as masters of paying what we want. Anyway, after checking into the hotel we took the metro to Old Delhi and went to check out the Red Fort. This was fort #3 for us, the smallest and the busiest. Several areas were closed to the public either for reconstruction efforts or preservation efforts. We did see where the elusive Peacock Throne once sat. When I become a treasure hunter this will be first on my list to find. Leaving the fort, we headed to the Jama Masjid, unfortunately so did the rain clouds. The mosque was also closed for prayer by the time we got there so we ended up at Karim’s restaurant. This is a restaurant that is well-known in Delhi and was started by a former chef-to-the-emperor. An accidental but famous discovery! Of course, it was delicious. After eating, we ended up on a bike rickshaw in the rain for the return journey to our hotel. 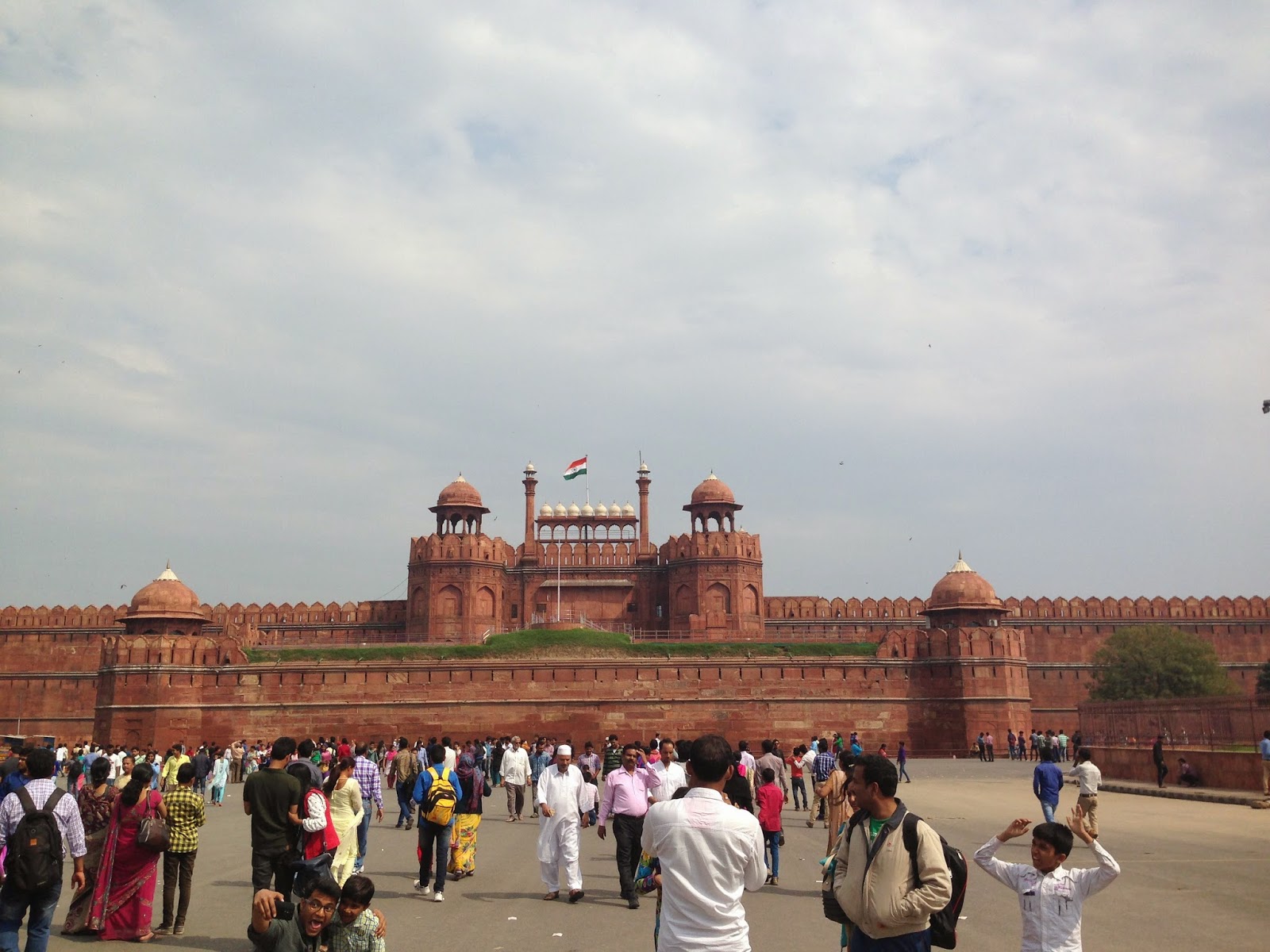 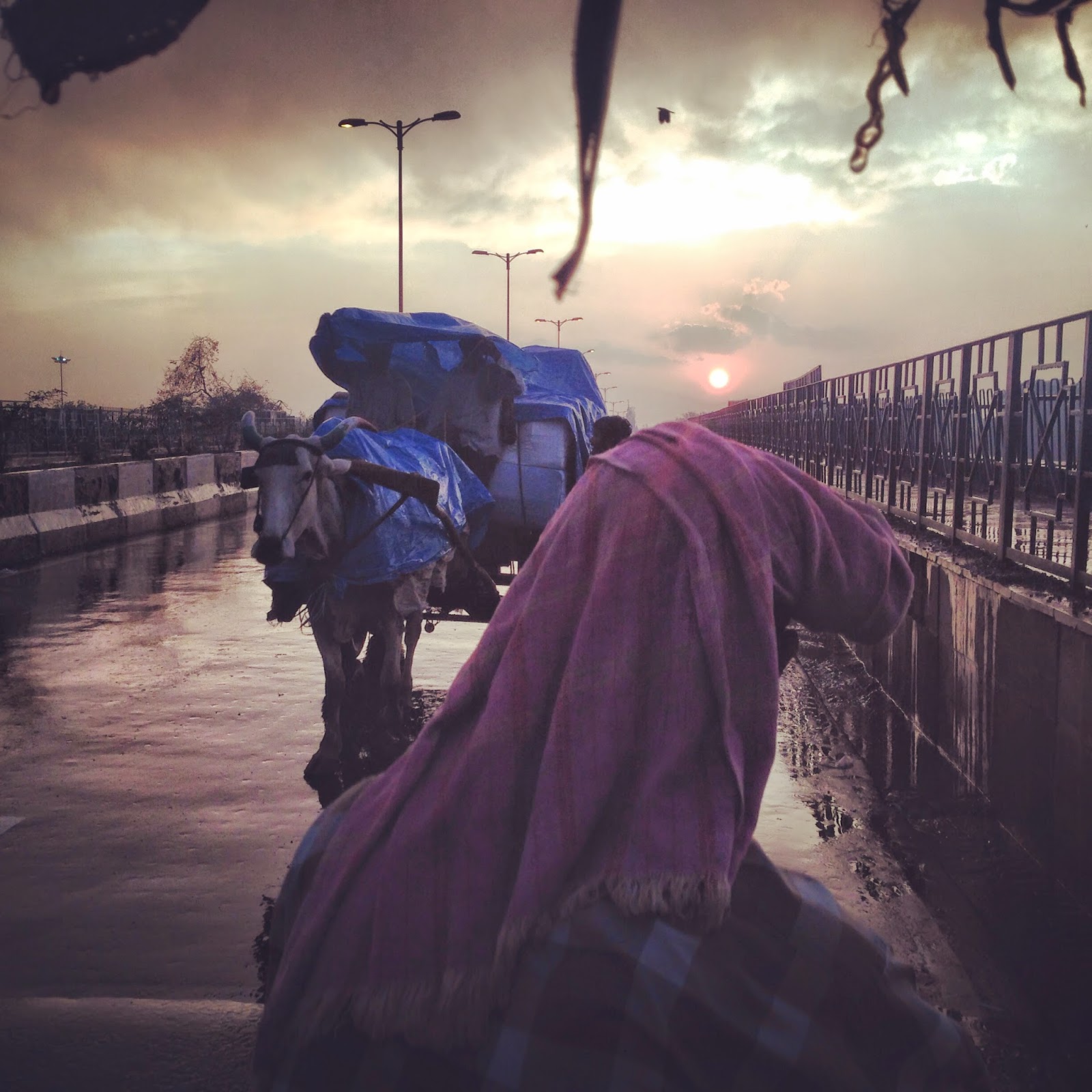 Rickshaw in the rain
Delhi day two was decidedly disappointing. Prepare for a dismal description of the day. Sorry, just had to get in some more alliteration. The day started with room service and lattes to go- not so bad! We then walked to the train station to buy our tickets for onward travel. We decided to go to Jaisalmer (which is back west towards where we had just came from) since we figured trying to see all of East India in a week was a bit ambitious and we had to be back in Delhi to fly to Vietnam. Anyway, we were almost to the train station and someone stopped us, engaging us in conversation and we always try to at least start out polite so we reciprocated in the interaction. However, within a few minutes the gentlemen tried to tell us that we could not buy train tickets for trains leaving within 48 hours at the train station. He insisted that we had to go to a travel company in order to buy those. In an effort to discourage him, I told him we were buying for a departure a week away. This didn’t work and he still tried to hail us into a tuk-tuk (don’t pay more than 30 rupees, he oh so kindly advises). We just kept walking and finally made it to the ticket counter where they, of course, sell tickets for trains leaving any time you want. Yet, the train we wanted was full. Harumph. We ended up buying wait list tickets (which made me real nervous) for an all day train instead of an all night train. It ended up working out but in the moment it was stressful and frustrating. Following that, we took the metro (shoved ourselves in as the doors closed) to go to see the Baha'i Lotus Temple. Upon arrival at the temple, we decided to turn around and get back on the metro since we were not prepared to stand in the half-mile line. This metro ride took us to the government buildings in Delhi where we thought we would be able to walk across the grounds to access the Mughal Gardens (Jared compares them to the Rose Garden at the White House) which are only open for one month of the year (perfect timing!). The route to walk to the gardens was blocked so we negotiated with a tuk-tuk driver to drive us to the gardens and wait for us there and then take us to a market called Dilli Haat. This is a well-known tourist market and the spelling is important to remember later in the story. At the gardens we encountered another 20 minute line and just a ton of people. Jared also had to tag and check the backpack. Part of the rules of entry to the gardens stated that no pictures were allowed. Well, the herd of people decided that this rule did not apply to them. The picture taking was absurd, causing congestion on the tiny path, and frustration to this rule-loving westerner. Part way through the garden Jared realized he had lost the claim tag for the bag. Cut to us basically running through the hoards of people back to the bag claim area where the attendants let Jared in to ID and take the bag without a fight. Frazzled, we returned to our driver and proceeded to our last, pre-negotiated destination. At least we thought that’s where we were going. The driver took us to a store called DELHI Haat, notice the difference in spelling but no difference in pronunciation. We argued with him and told him he lied and he tried to act like it was the same. It wasn’t. We paid him (the agreed amount, even though we shouldn’t have) and told him that he is the reason people don’t like India and stormed off to the metro. He'd gotten the better of us, despite our master negotiator status. The metro, our only trusty steed, took us to the real market where we angrily shopped and I angrily bought a skirt which I now regret. At this point we were tired and wanted nothing more than to be back at the hotel but neither of us even suggested taking a tuk-tuk instead of the slower metro. Finally, we arrived back to the hotel and went to bed early because the next day we were leaving at 3:30 am to see the Taj Mahal at sunrise. 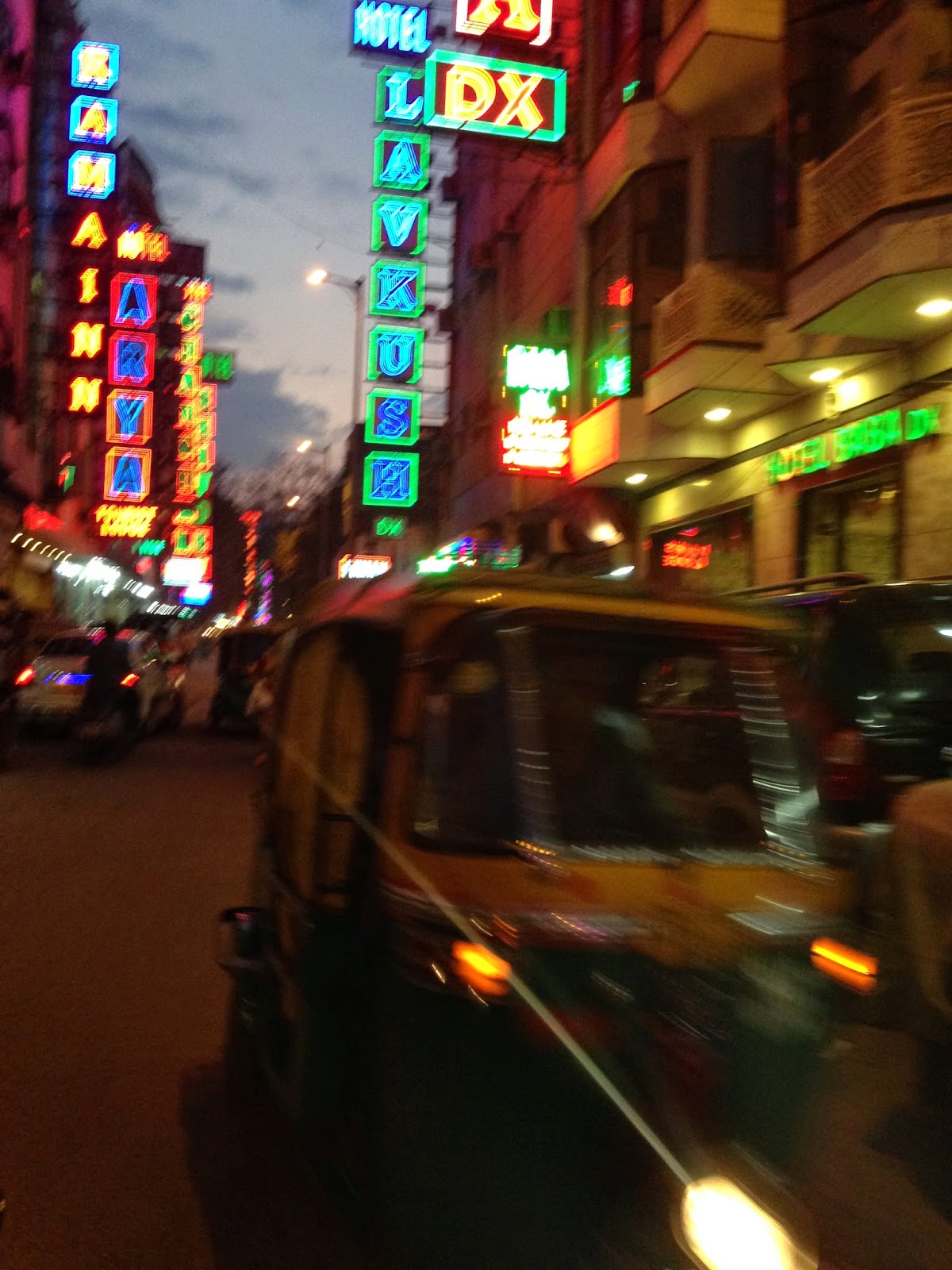 Delhi at night. I actually don't have any pictures from Day 2 but, there needed to be a picture here since I just wrote a giant paragraph.


I will write about the Taj Mahal in a separate post as this is already quite long and we spent an additional almost 2 full days in Delhi after returning from Jaisalmer. After returning, we were finally ready for the line at the Baha'i temple, saw the Jama Masjid, went to the Qutb Minar complex, and visited the predecessor to the Taj Mahal, Humayun’s Tomb. I will give some details on these sites below with some pictures but I would like to relate an interaction we had with some locals real quick. Our last night there we went to a more westernized shopping area and were walking around and looking for a couple items. While walking we were stopped by a younger guy and girl. We assumed another picture request but the guy addressed Jared and informed him that he and his friend were in school and were working on a project about how safe Western women feel in Delhi and would it be OK if they talked to me. Jared was a little confused, as was I, as to why he was asking Jared and not me. Jared looked at me and said, “Yeah, I mean, I guess, is it OK with you?” I said yes and talked with the girl for awhile about being a Western woman in India. It was a brief conversation which she videoed on her phone. While I might make an appearance on Indian YouTube, I wish that we could have sat down with some coffee and discussed the issues in greater depth.


The Lotus Temple of the Baha'i faith is one of 8 in the world. It was free to enter and we could not take pictures inside the sanctuary but it was original and unique from the other places of worship we have visited. I won't go into detail about the Baha'i faith but you can read about it on trusty old Wikipedia, if you'd like. 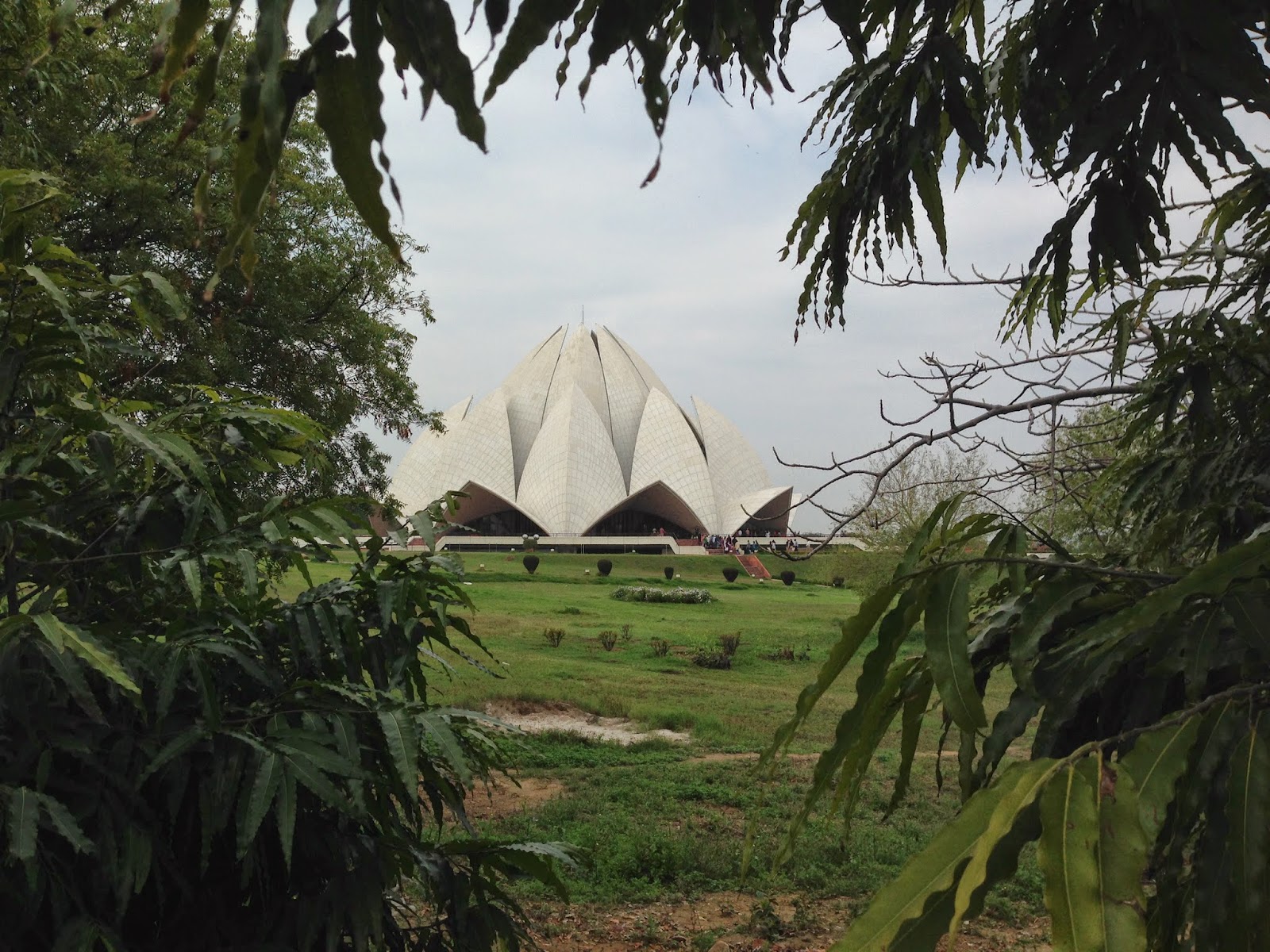 The view from outside the gates 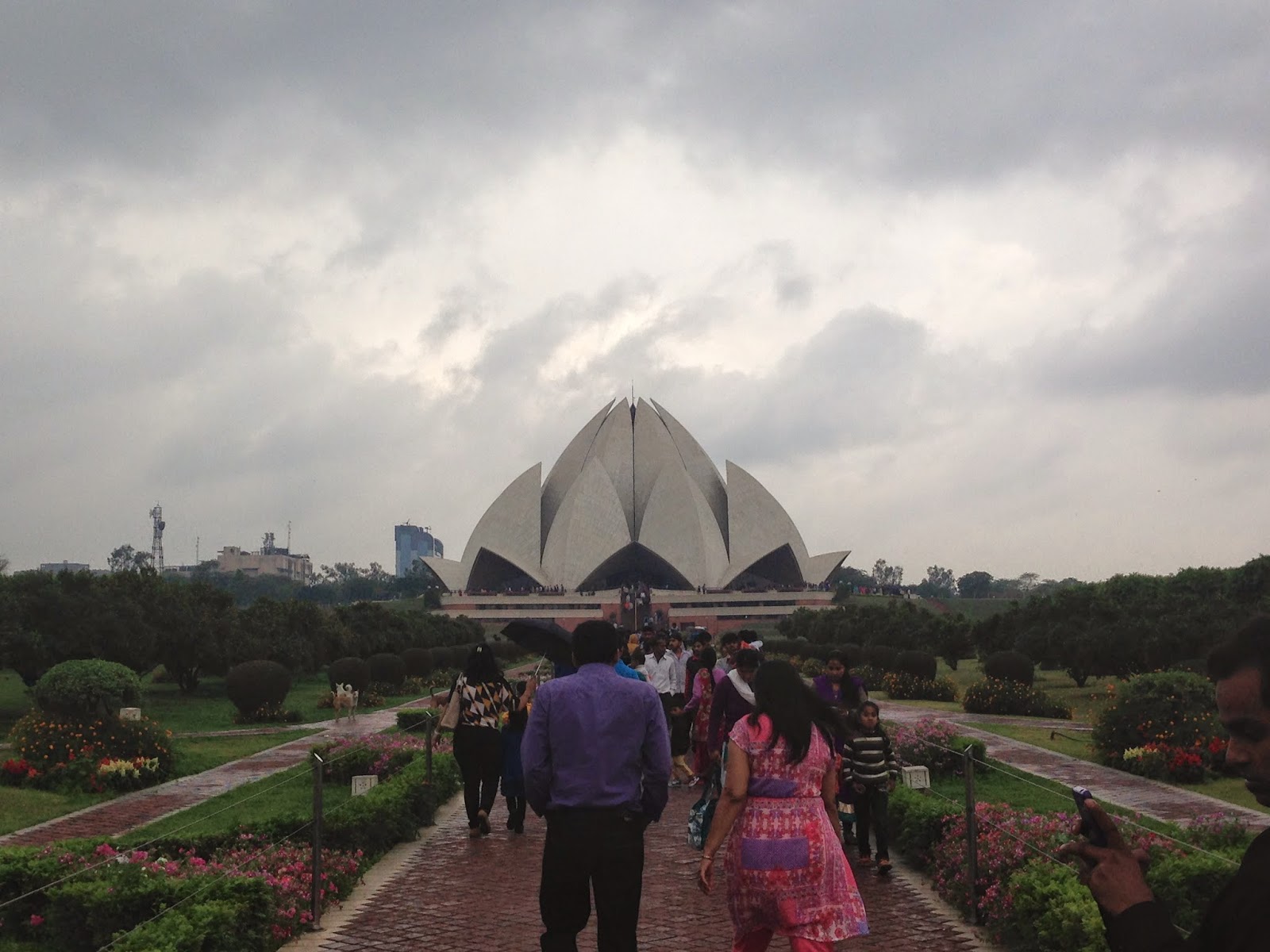 Walking up from the front 
The Jama Masjid, while quite large, offered little as far as qualities different from those that we have seen at other mosques in the area. They also charged a camera fee even if you just had a bag with you. The ticket people did not seem very enthused about Westerners, especially when we refused to pay two camera fees (we put my purse into his backpack so we technically only had one bag). 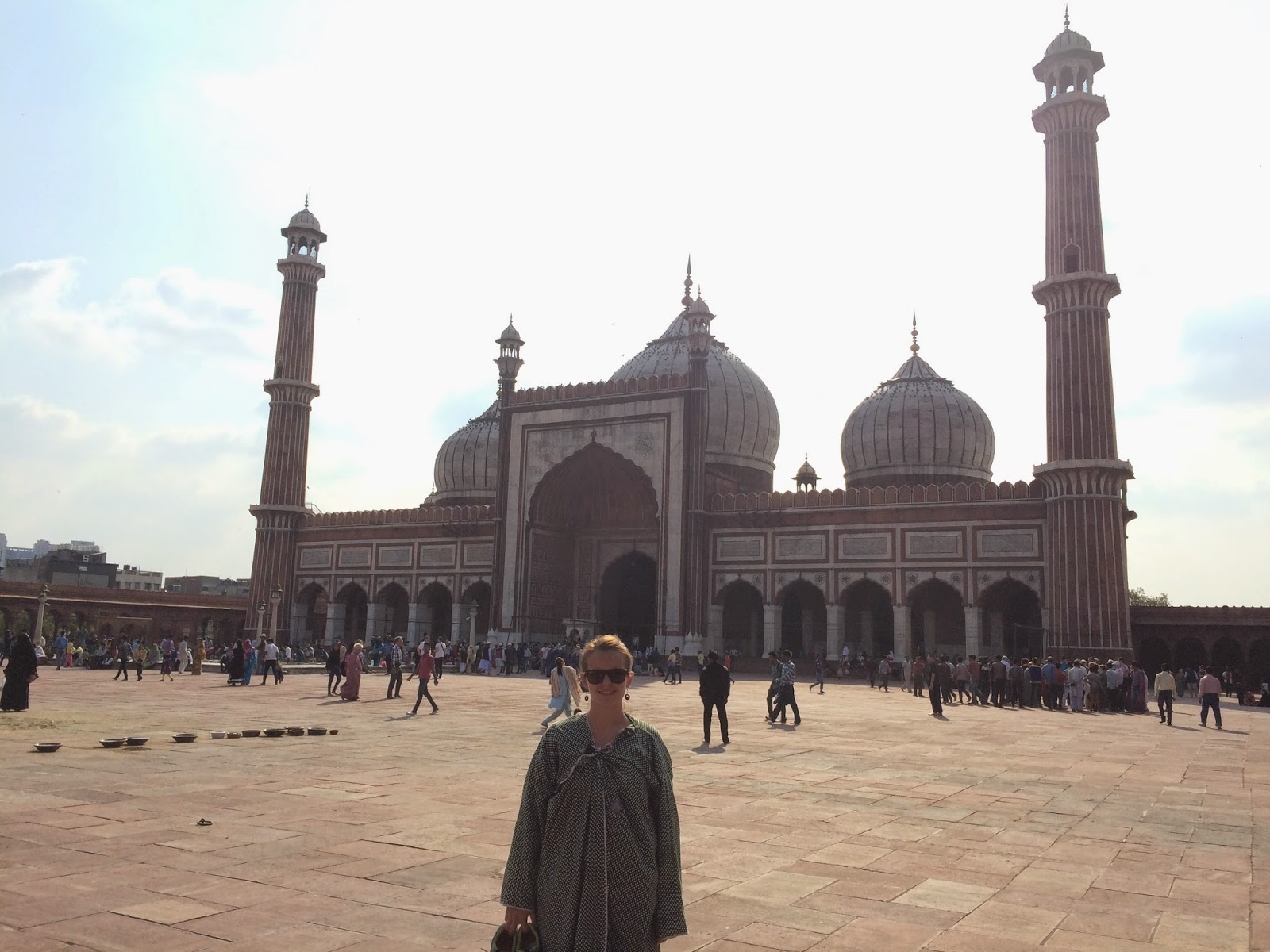 Oh, yeah, and I wore this robe thing so I wasn't indecent in all my indecency. 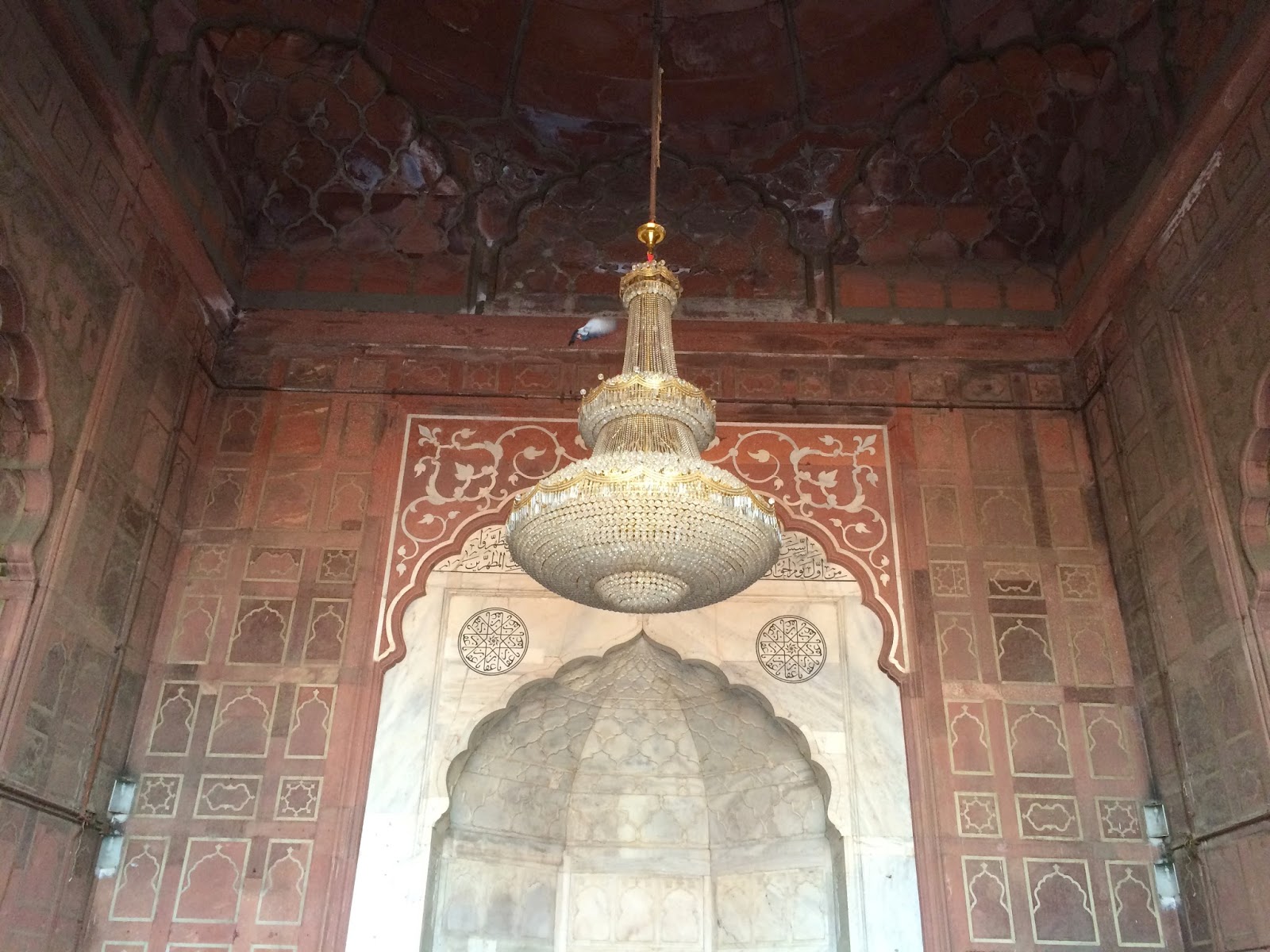 The main prayer area, I thought the chandelier was beautiful.
The Qutb Minar was neat from a historical perspective and we got to listen to this funny skit-type audio guide, similar to the one we had at Jantar Mantar in Jaipur. The minaret was built in 1193 and the rest of the mosque was constructed nearby on a site which was previously a Hindu temple (Jared and I differ in our remembrances of this bit of the history- he believes that the pillars were already made but not part of an existing structure). Since that time, repairs have been done on the minaret but the original structure remains standing. The rest of the mosque did not fair so well and is now in ruins. However, on some of the remaining pillars you can see remnants of Hindu iconography. 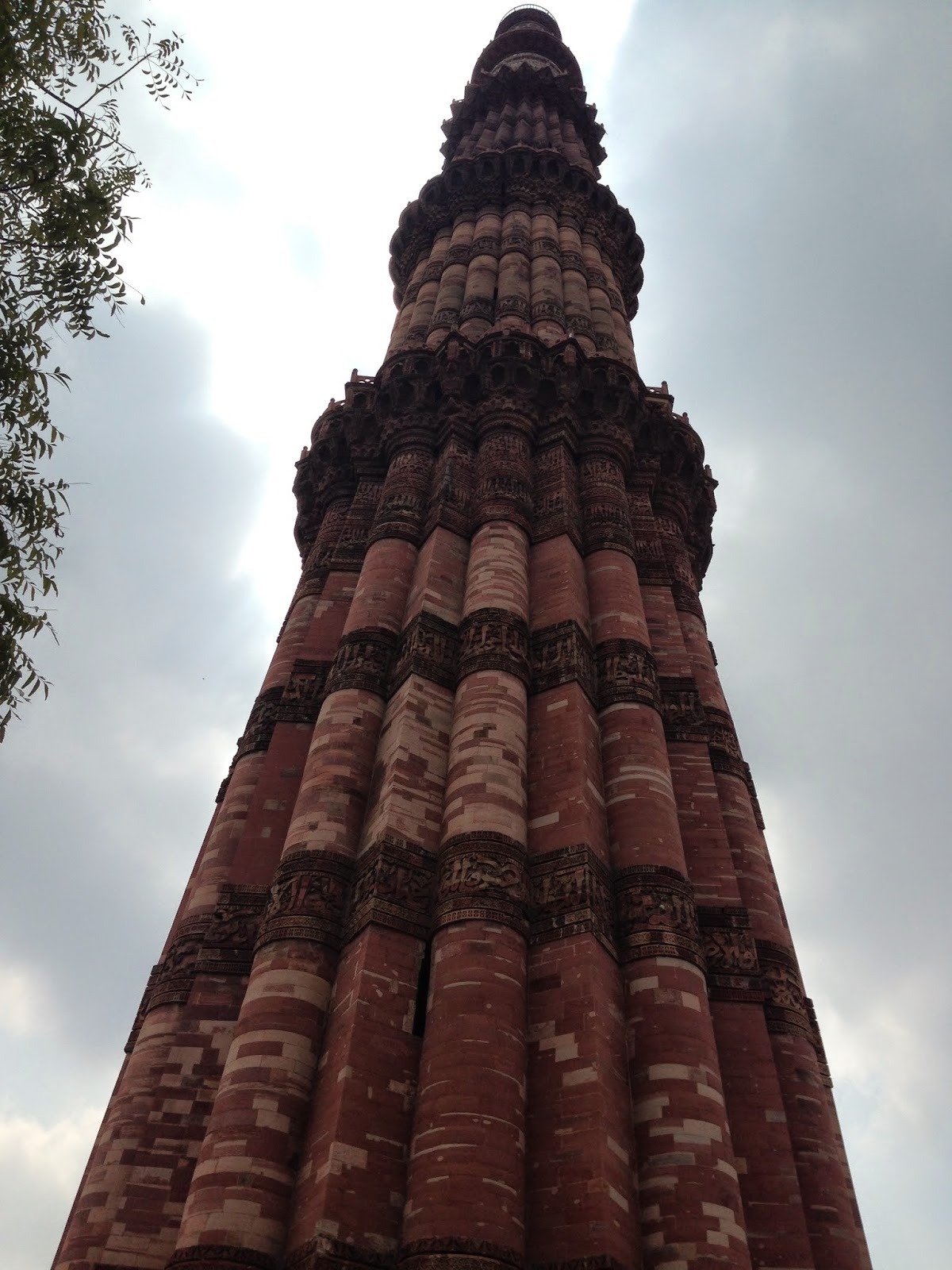 The minaret is 73 meters tall 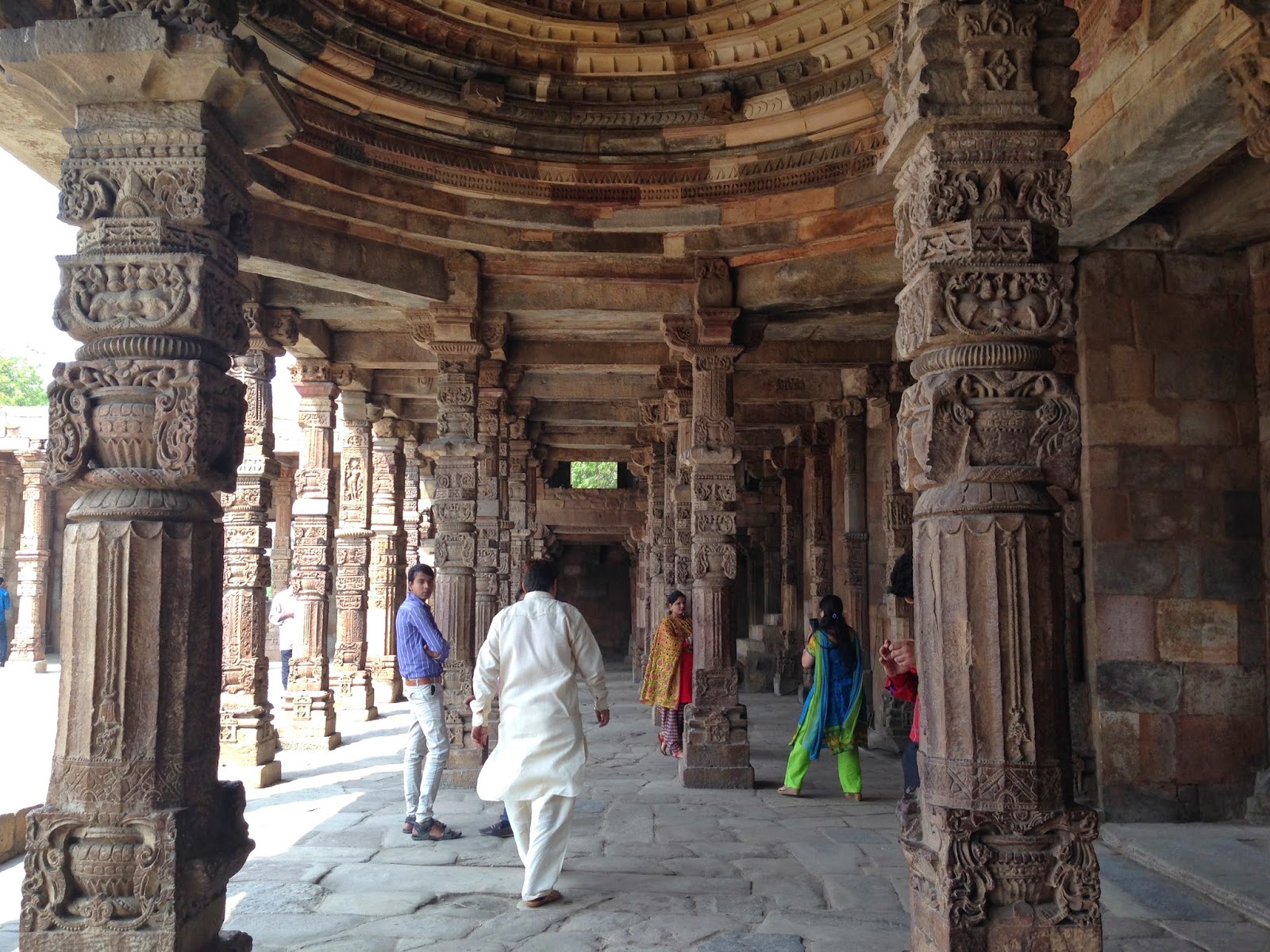 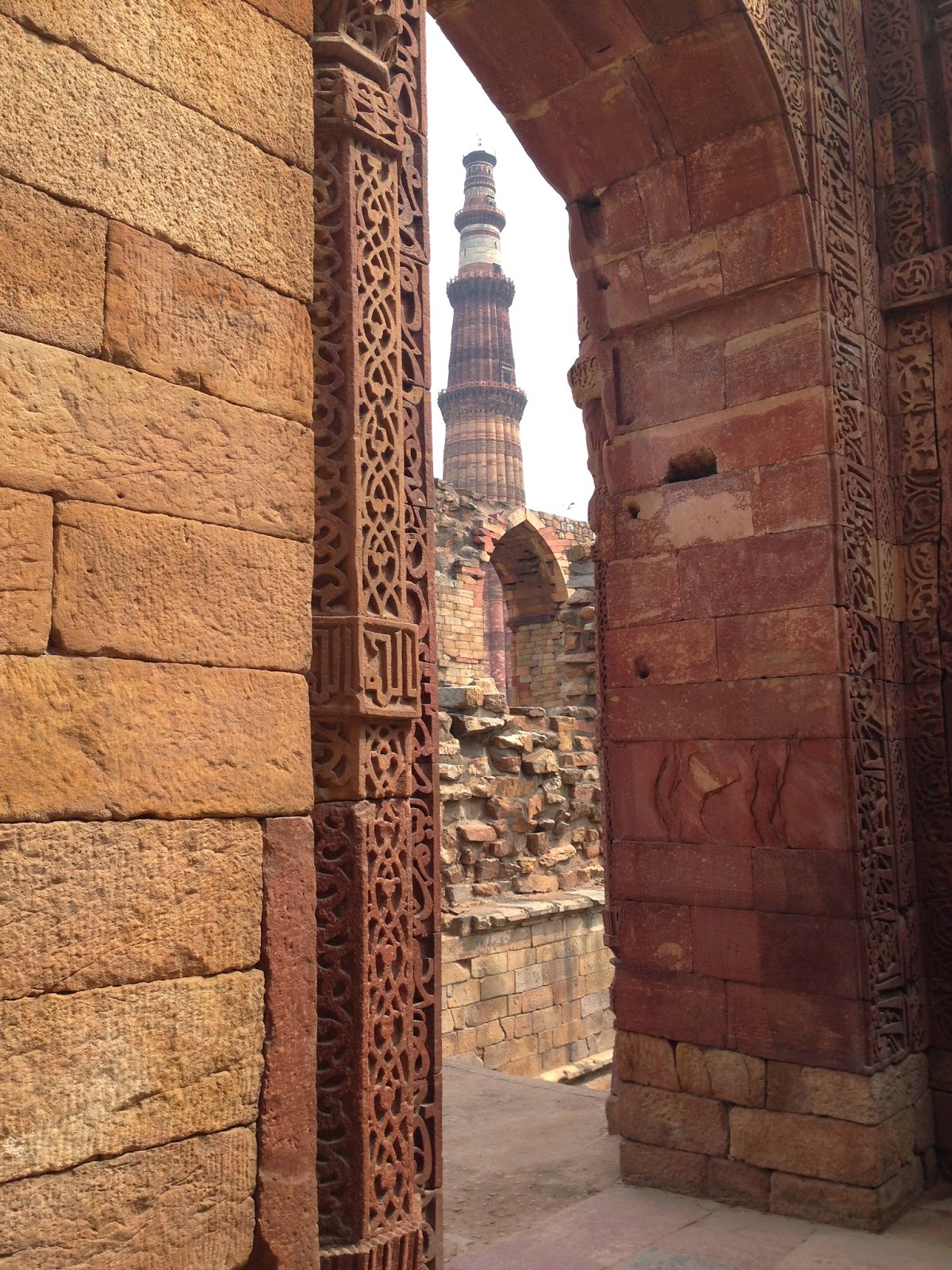 The minaret with some of the ruins 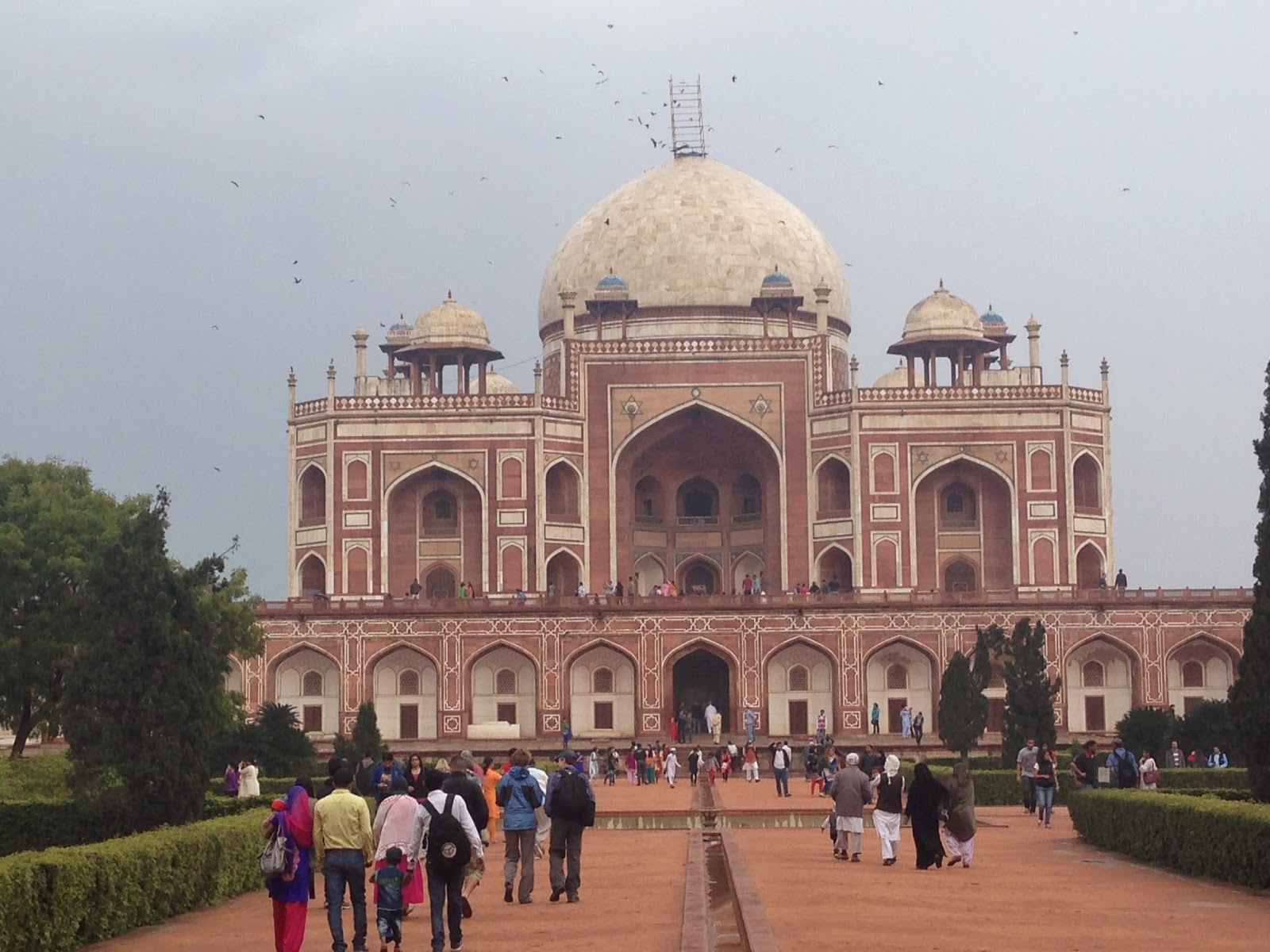 After seeing the Taj Mahal, Humayun’s tomb made sense architecturally and it's easy to see the similiarities between the two.


Delhi could be overwhelming to the senses and was frustrating at times. However, it also offered more in terms of public transportation than other cities in India and had delicious food and a few more Western shopping options.
From Delhi we went both to Agra and Jaisalmer. Those two will be next!
Posted by Christy at 6:05 AM