My song for Jaisalmer is a classic:
https://www.youtube.com/watch?v=VqElJnsUvtE
Although we weren’t in Arabia, we were close, just 20 km of desert between us and Pakistan (OK, so Jared just told me that Pakistan is, in fact, not considered Arabia. Well, the song still applies). Jaisalmer is known as the Golden City because of the yellow colored sandstone that comprises most of the buildings. It is also the home of India’s only ‘living fort’ which means that people still live and work inside the fort. There are also hotels inside the fort but we chose to stay outside the fort walls so we could enjoy the view. We spent two days (three, if you count the day before we left on the night train) in the city and two days and one night in the desert. It was a relaxing city and a welcome change from the hustle and bustle of Delhi. We arrived late in the evening so our first day we spent the morning walking around the shops and markets and found some ‘camel riding clothes’ so I could have some legit pictures. In case you are wondering what camel riding clothes are, here are some pictures: 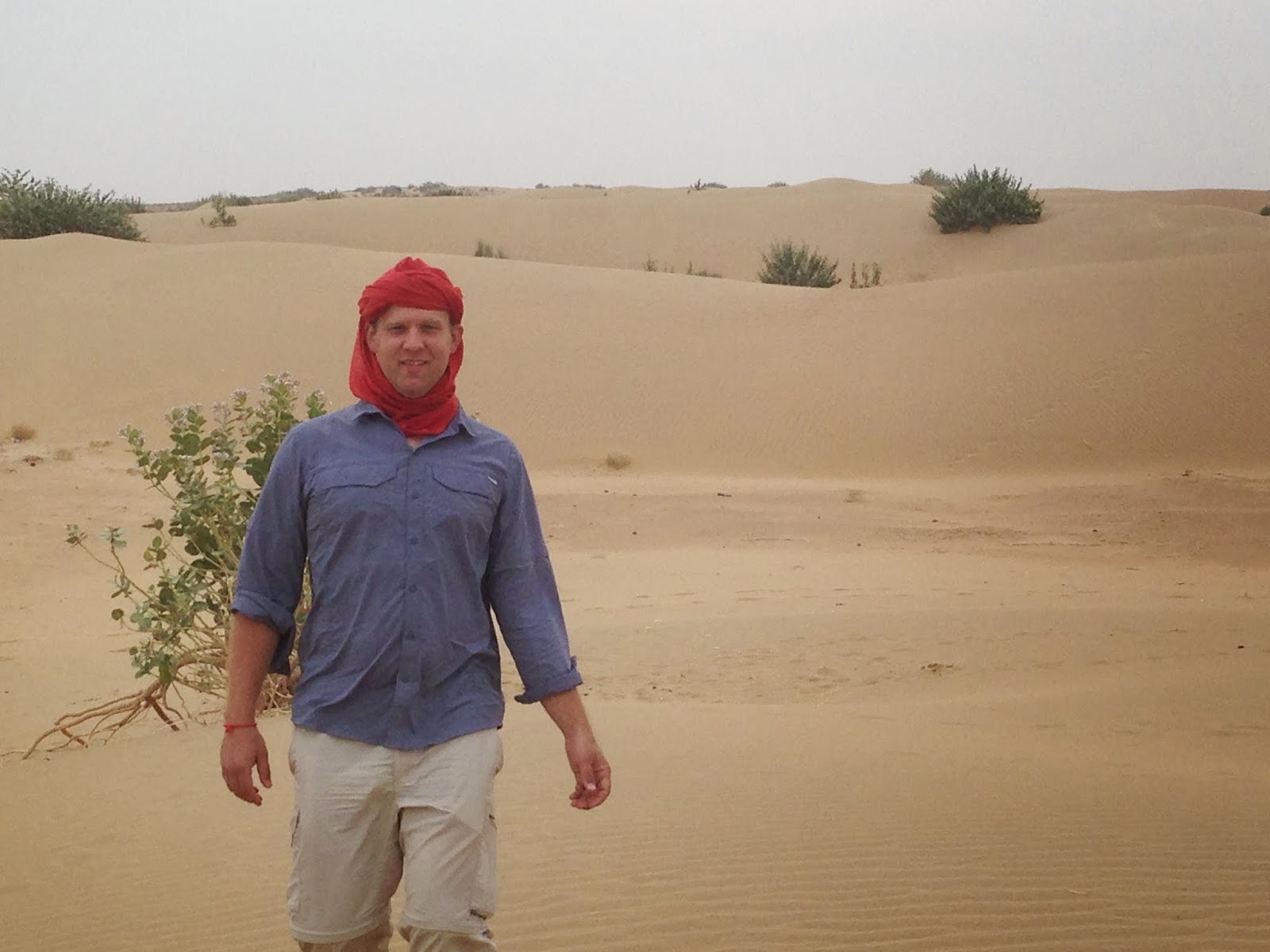 Jared had a turban! 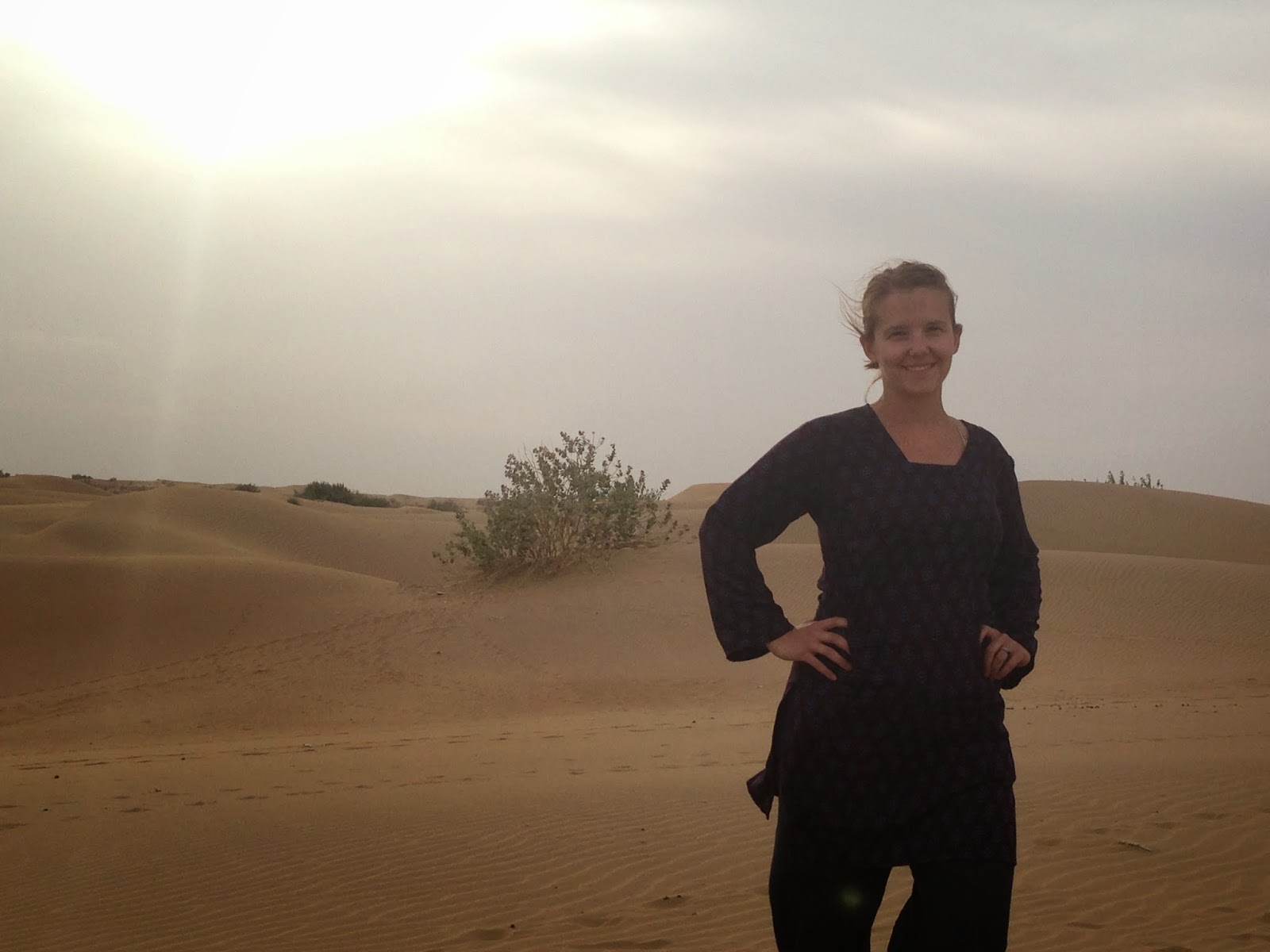 And I am basically wearing pajamas!

We left that afternoon with our guide for our camel safari and night in the desert. Before arriving at our campsite, we visited abandoned towns that were bustling with opium vendors during the days of the Silk Road. Some of these old buildings were being restored and others were still in their ruined state. One particular view I enjoyed was the crumbling buildings of an old village next to a new village with energy generating wind turbines nearby. When we arrived to the sand dunes, our camels and guides were patiently waiting for us. A pat on the neck (from us) and a snort (from the camels) acted as our introduction and we climbed onto our new friends. My camel was named Laloo (which rhymes with the Hindi word for potato- aloo- so I thought that was quite appropriate) and Jared’s was named Rocket. Yea, Rocket. The men helped Jared don his turban, and we headed off into the Arabian night. Riding a camel is like riding a horse but with a more exaggerated transition from sitting to standing. We rode across the dunes, scarf and turban alike flapping in the wind and arrived at our ‘hotel’ for the night (as the guide said, “It isn’t a five star hotel, it is a thousand star hotel”). This thousand star hotel boasted toilets-au-naturale and cots open to the elements. We perched on top of a dune and watched the sun set as our guides cooked dinner over an open flame. After dinner, we sat around the fire and chatted with our guide about his many desert adventures, thoughts on politics and the wonders of India. At one point in the evening, the youngest of our guides had to go chase the two camels as they had wandered off to find the lady camels. This same, slightly indentured guide tucked us under our many, many blankets (about 1 foot thick of blankets) on our cots before curling up by the fire with the camel blankets as a bed. I laid awake as long as I could to try and take in the view for as long as I could manage. The next morning we had some chai, bread and eggs before saddling up again for the ride back to the jeep and back to the actual hotel. Some goats wandering around the ruins of the ancient cities. 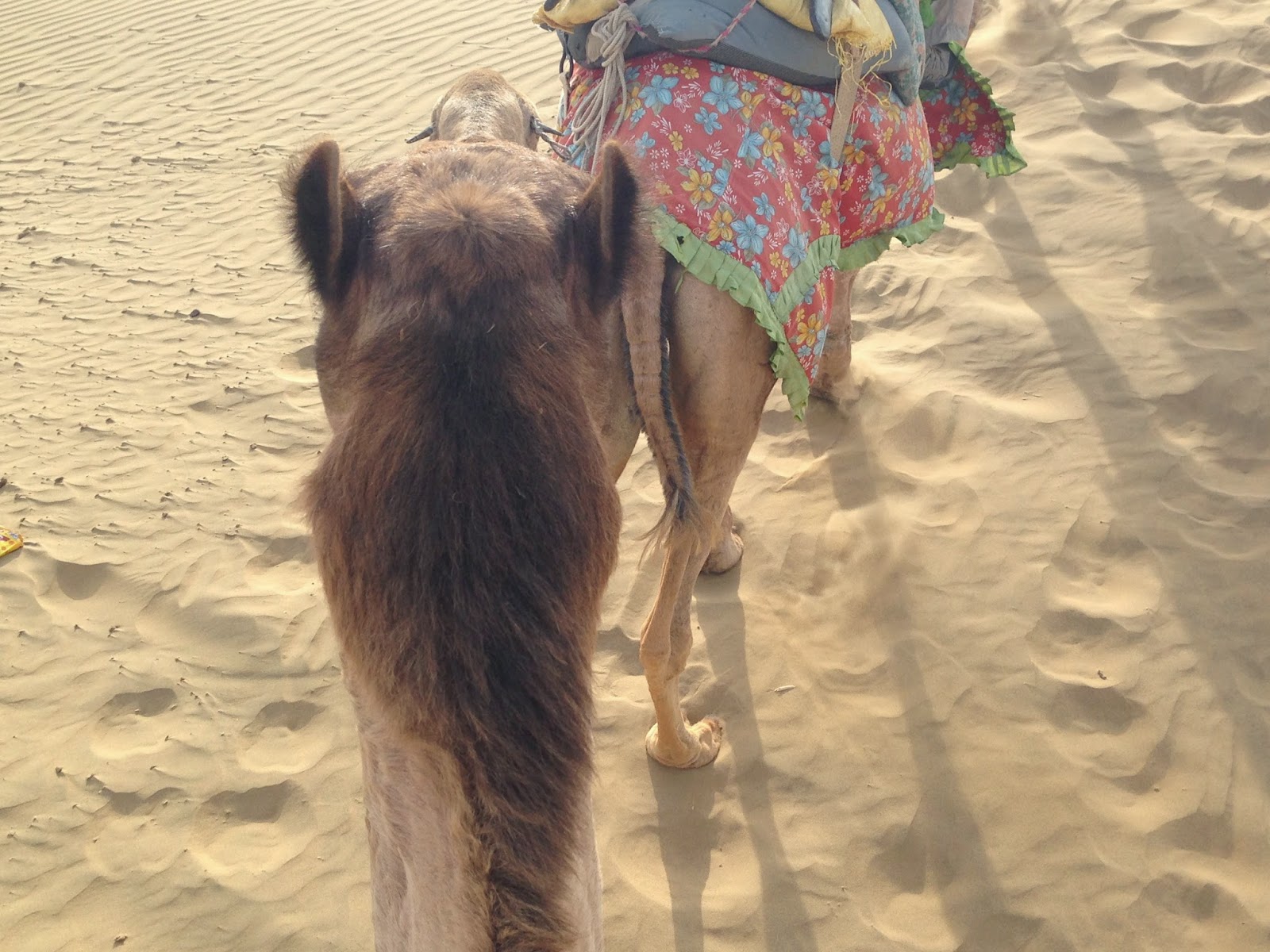 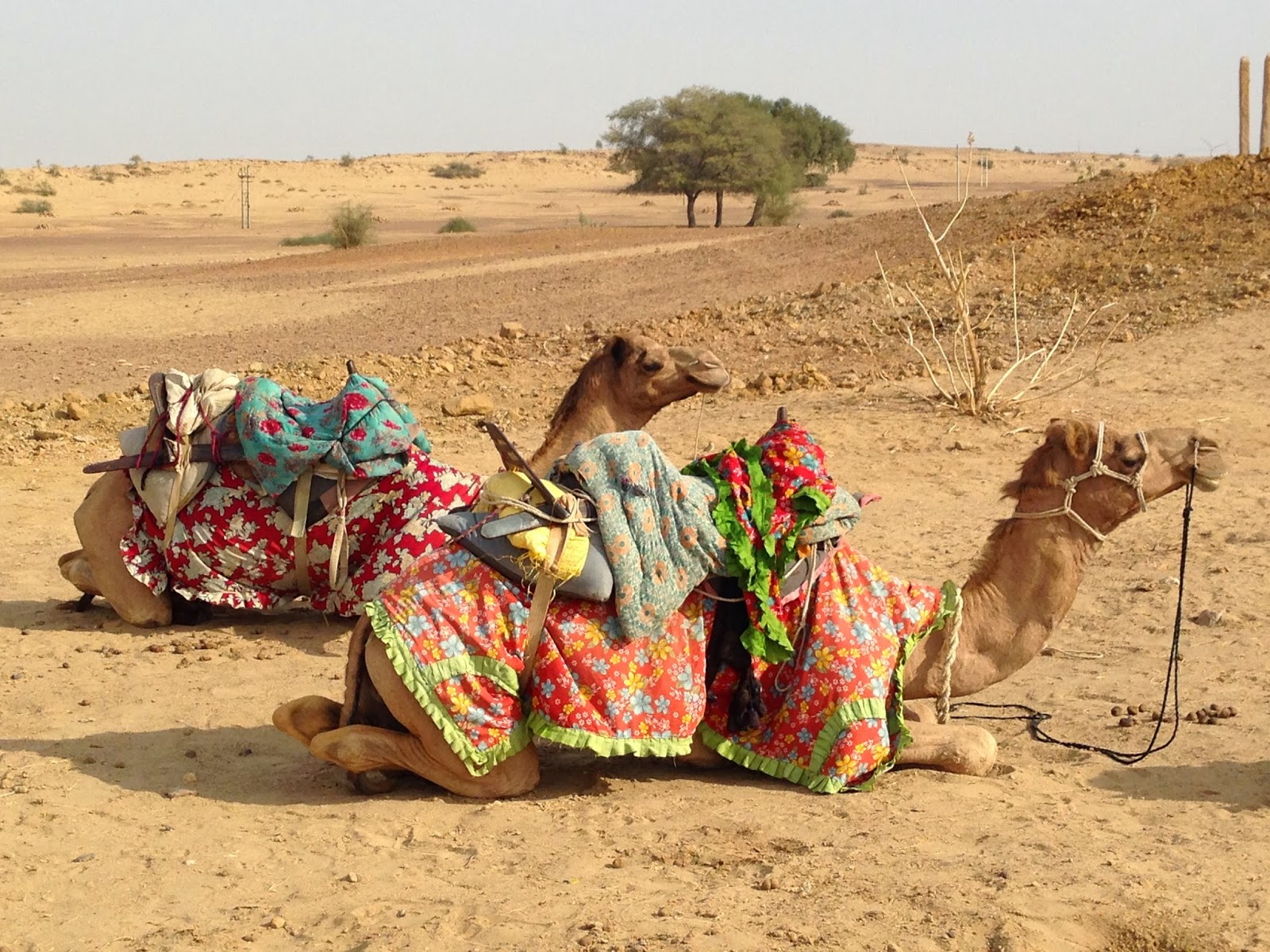 Aren't they dressed so beautifully? 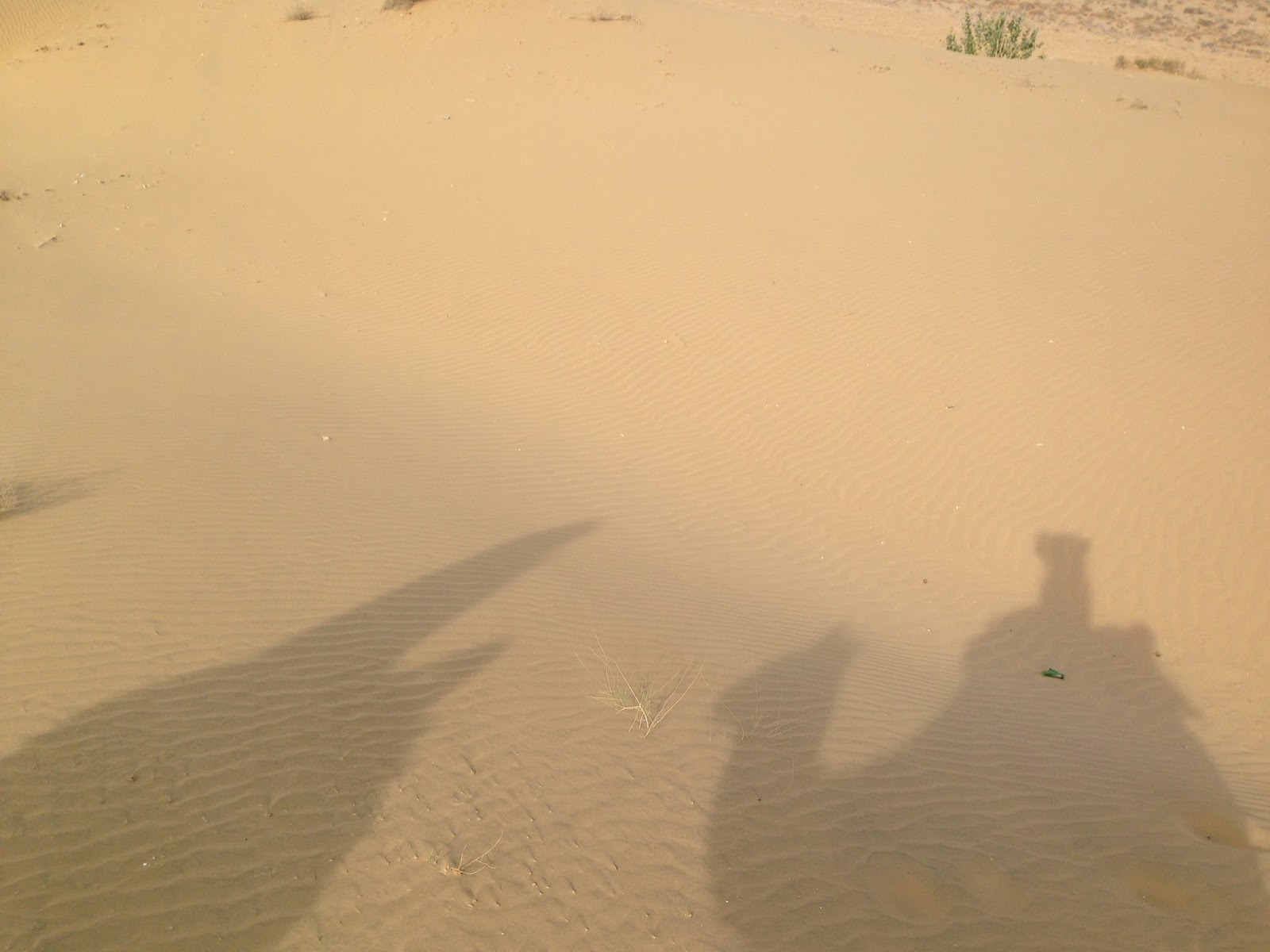 What good is a camel safari without a picture of the shadows in the sand?
The rest of that day and the following day we walked around the fort, got massages and toured the old, unique mansions (havelis), of Jaisalmer. The city really does live up to the title of Golden City as the golden sandstone dominates the scenery. Our time here was relaxing and, I think necessary, for both of our perspectives to return to a somewhat normal state after our angry day in Delhi. 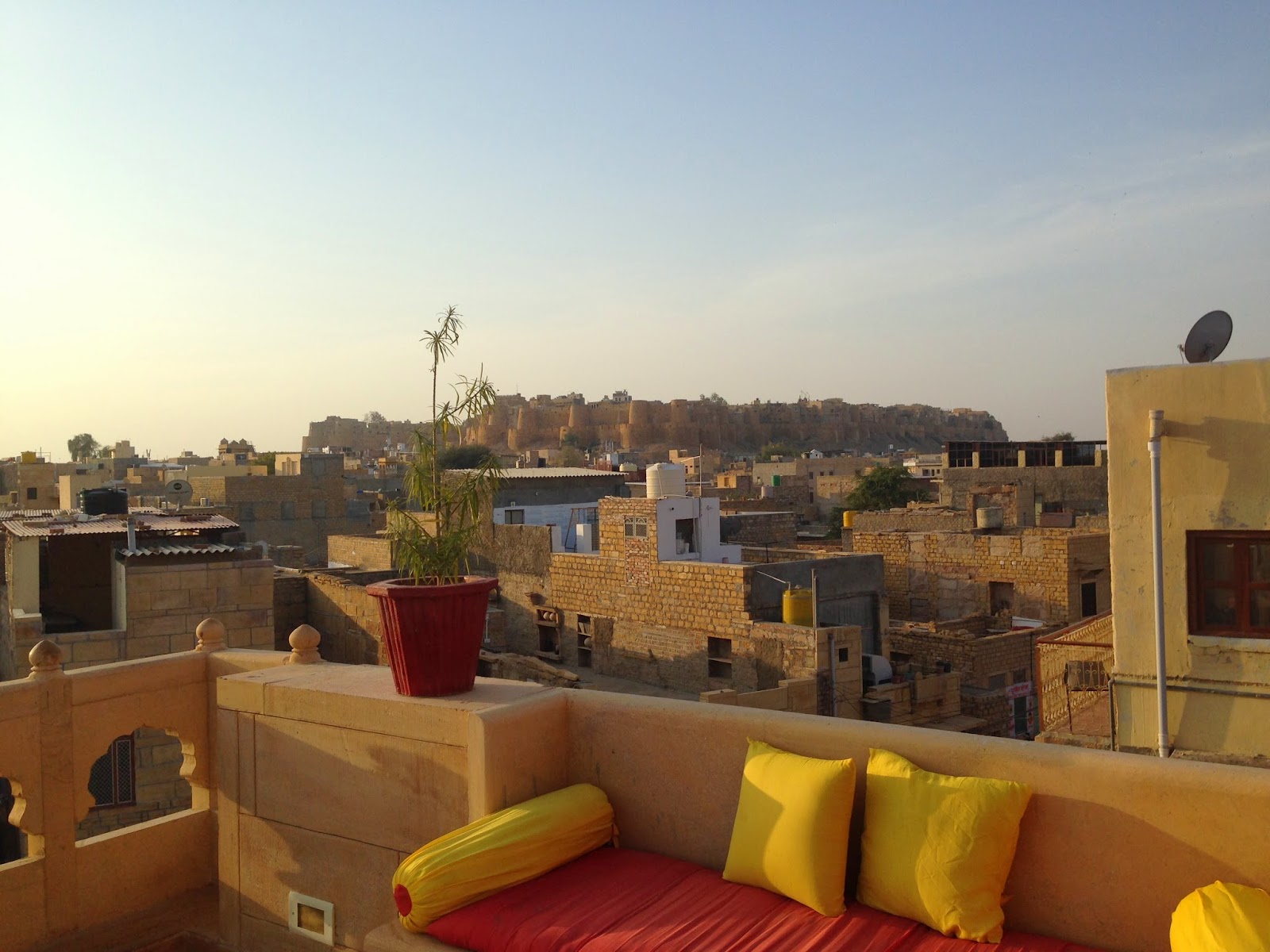 View of the fort from the hotel balcony 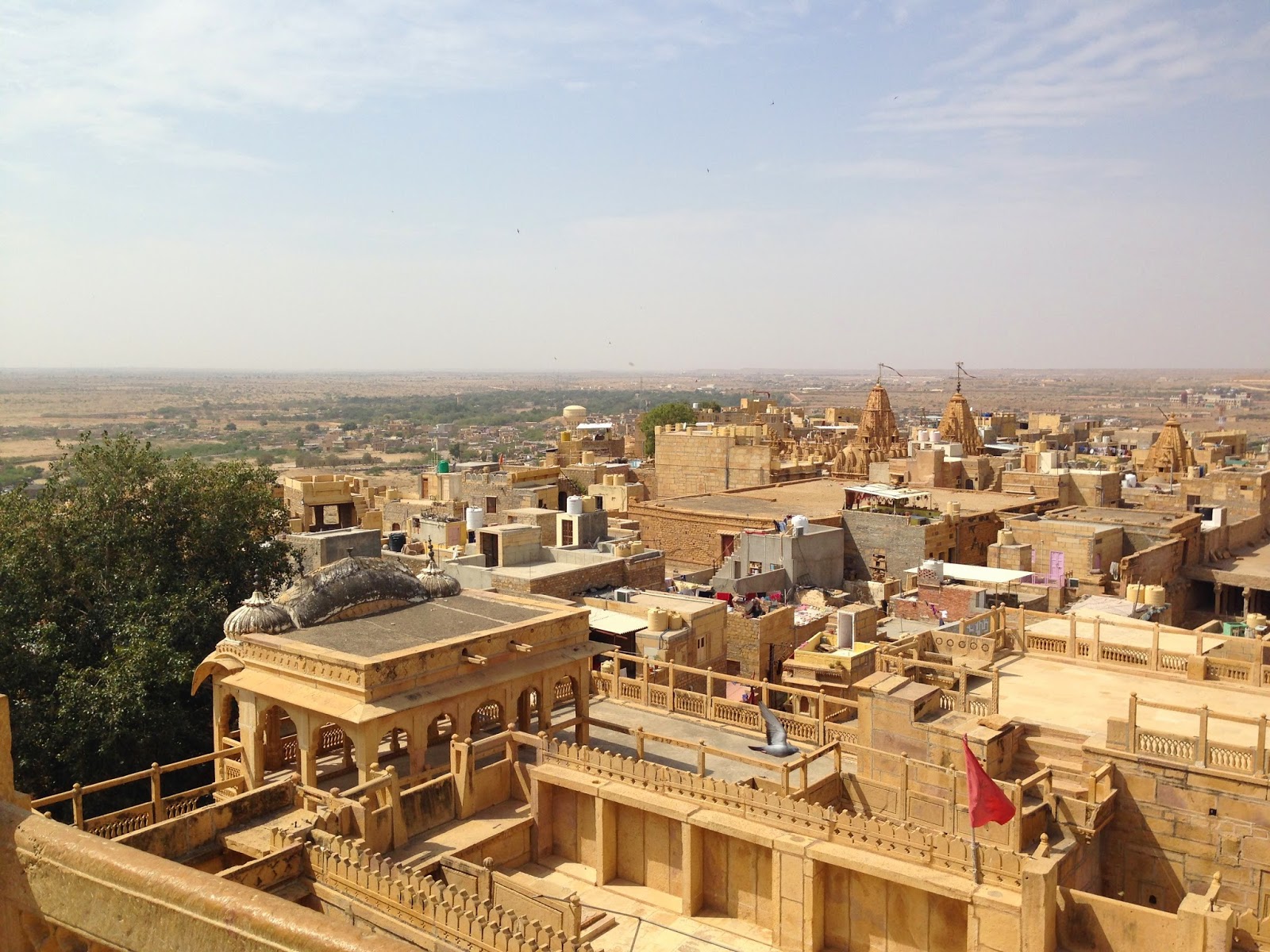 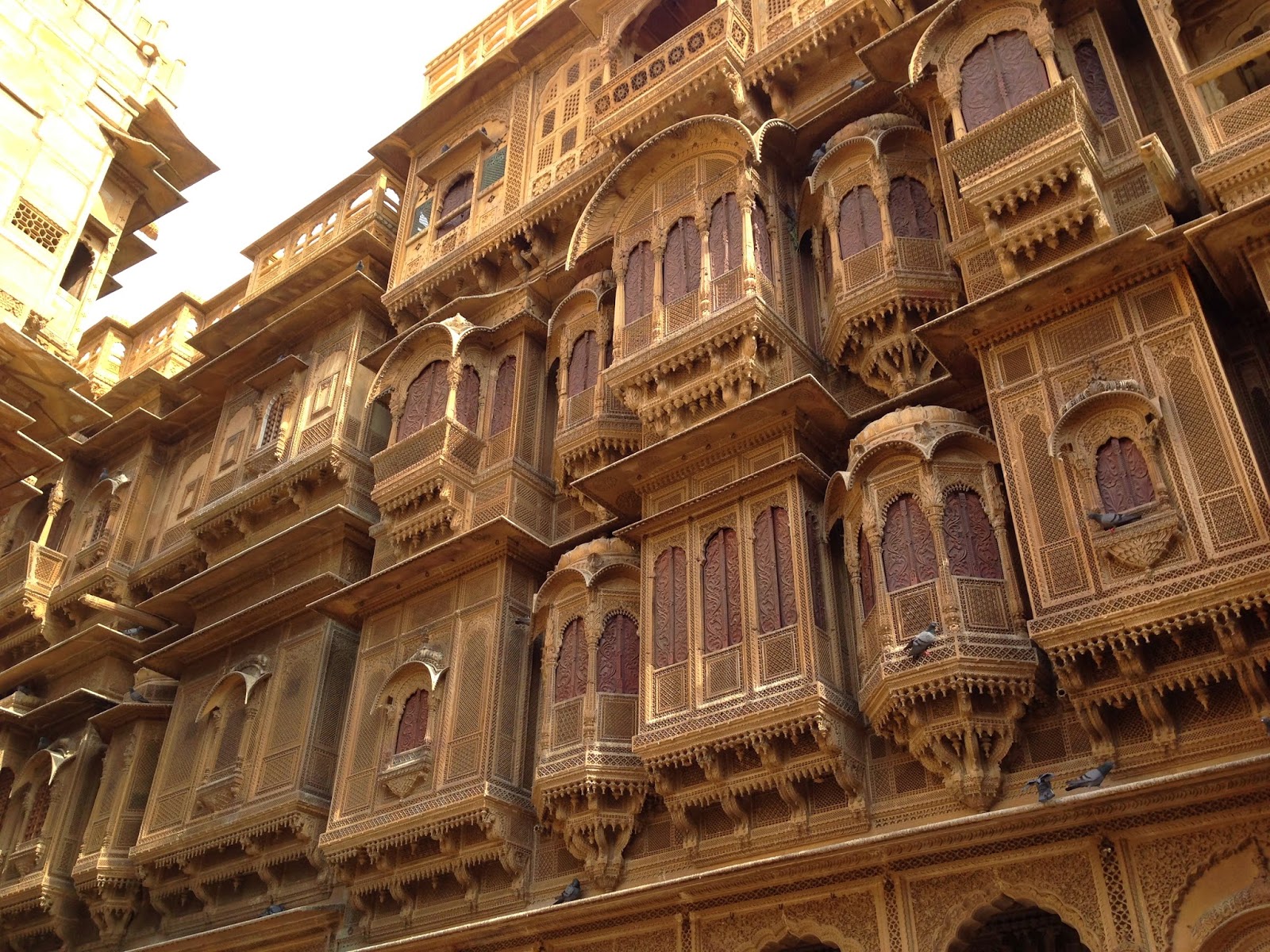 The façade  of the haveli 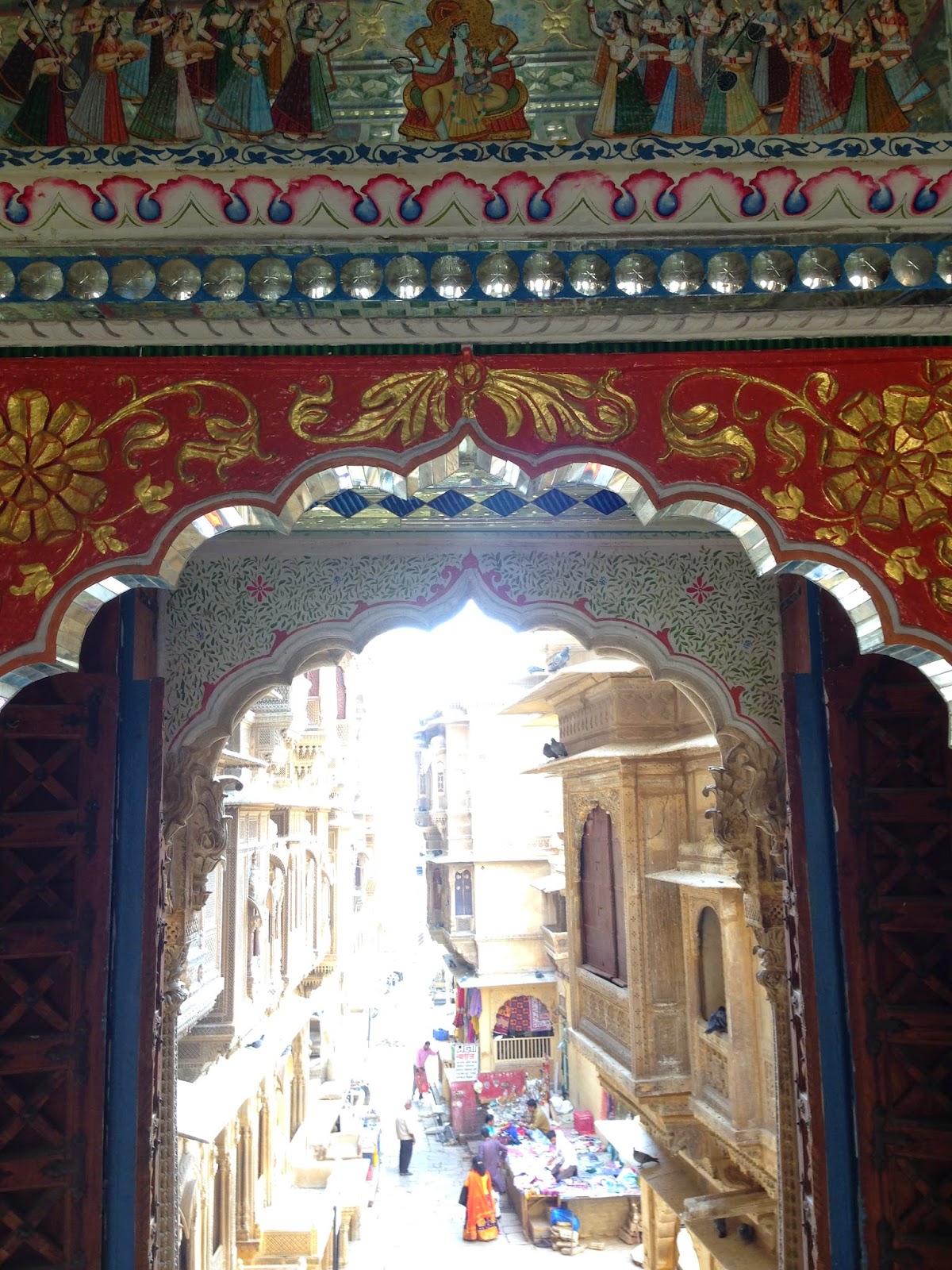 Looking out from the inside of the haveli 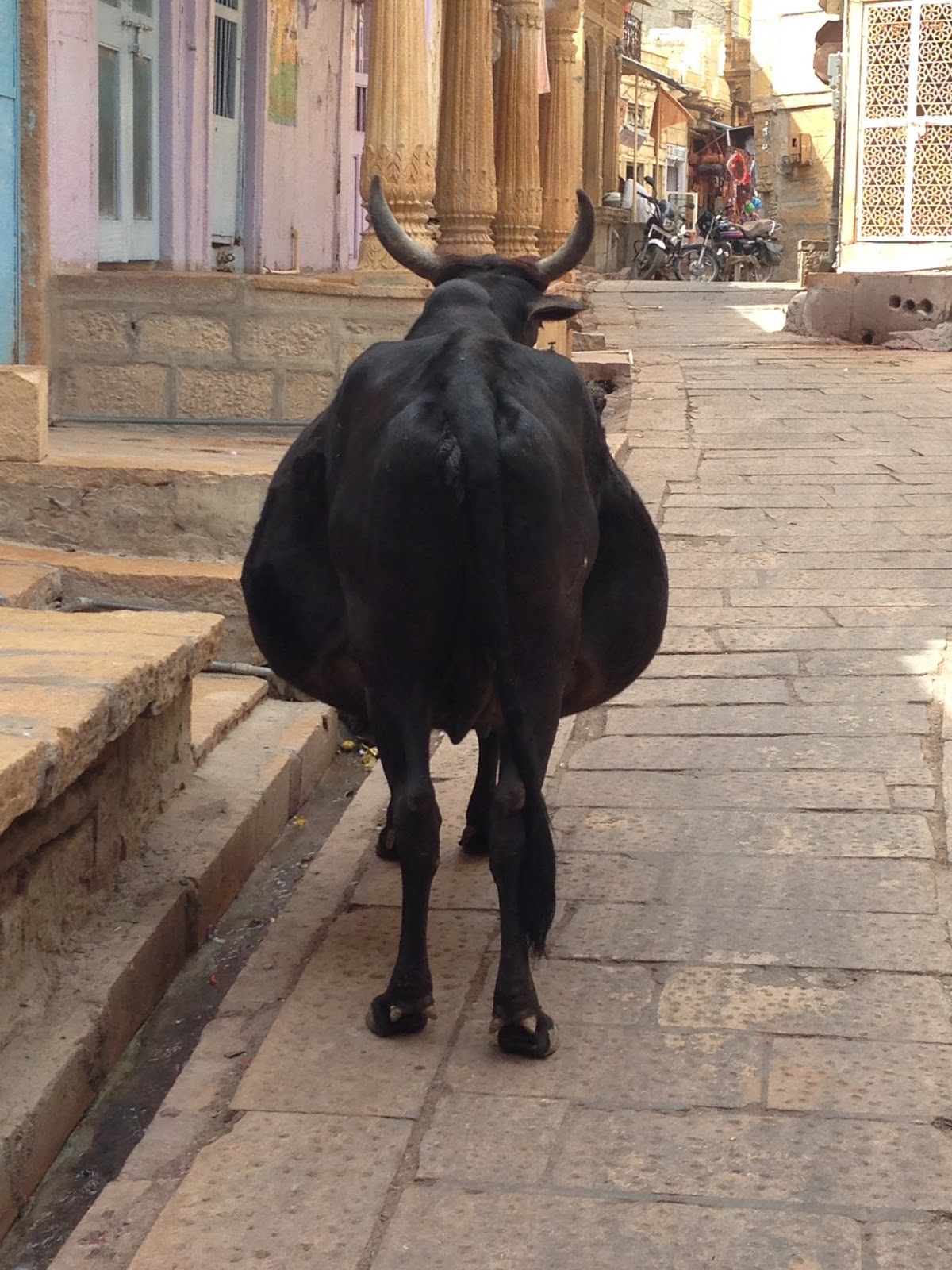 Whoa, Bessie, you're about to pop there.

Even though we spent a couple more days in Delhi before flying to Vietnam, it feels as though we left India on the high note of Jaisalmer.