We arrived in Koh Phi Phi in the late morning. We didn’t have a room reserved so walked until we found a place that seemed suitable. There are plenty of places to stay and it wasn’t hard to find a private room with AC that was in our budget range. The main town center is small enough that you can walk anywhere easily. In fact, there are no cars or motorbikes, everyone walks or rides bicycles. That part of Koh Phi Phi was refreshing. We walked around the first day and looked at shops and restaurants and found a beach and a drink with an umbrella. We quickly realized that this island was very different from Koh Lanta for several reasons:


Not like "oh hey 5 beers in a bucket of ice." Buckets. Of liquid. Seriously? The beach and the whole town is manicured to appeal to the college party crowd. Now, don’t get me wrong, it made for some excellent people watching but for sleeping and normal-person enjoyment it had little to offer in the two days we were there. I will say that we saw potential. Had we more time or more money or both, we could have easily enjoyed Koh Phi Phi on our terms. However, we had two days and a limited budget, so the hostel we found (which passed our initial standards), happened to be right next to one of the most popular (loudest) bars in town. While this was fine when we were enjoying L.A. Confidential during the sunset screening on the rooftop of the same bar, it was decidedly not fine while we were trying to sleep at 1 A.M. 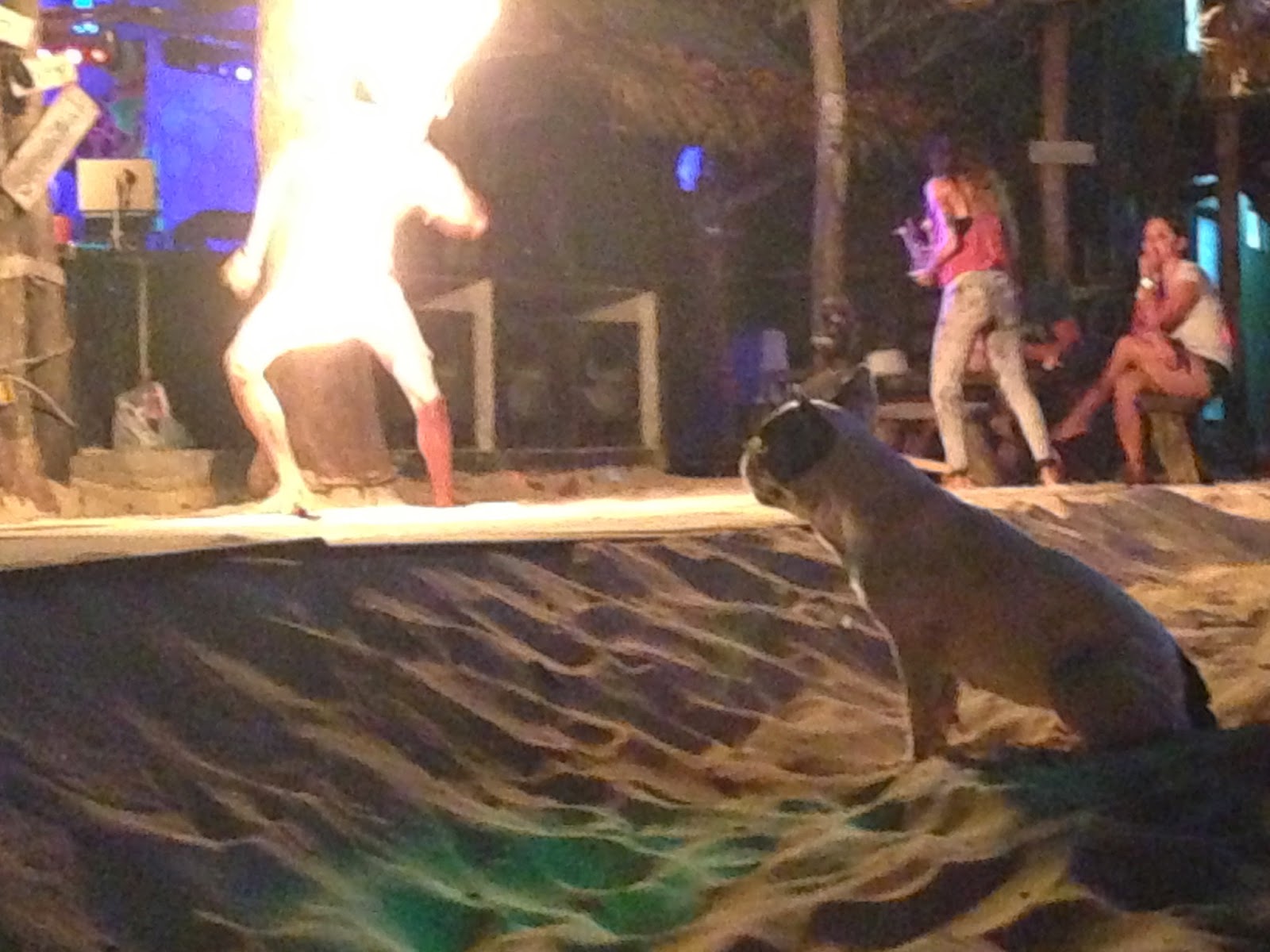 This French bulldog loved the fire show on the beach!


Our first morning there we had an Americanish-style breakfast and then walked to Long Beach which is part of the main island. It was nice but we soon got hot and returned to our hostel to work out next day details, when we were met with our first island power outage. We went ahead and used that time to give Jared a haircut and nap a bit. The power quickly came back on and went to dinner and were in bed early. Did we go to sleep early? No. Double, super triple, extra-loud, bar NO.
We grabbed as many ZZZ’s as we could and woke early to hire a long-boat taxi to take us to Maya Beach. This is a beach that was made famous by the movie The Beach (which Jared had not seen and I could not remember ,so I’ve downloaded it so we can watch it when we get the chance). We wanted to get there early so there wouldn’t be as many tourists. It was worth it. 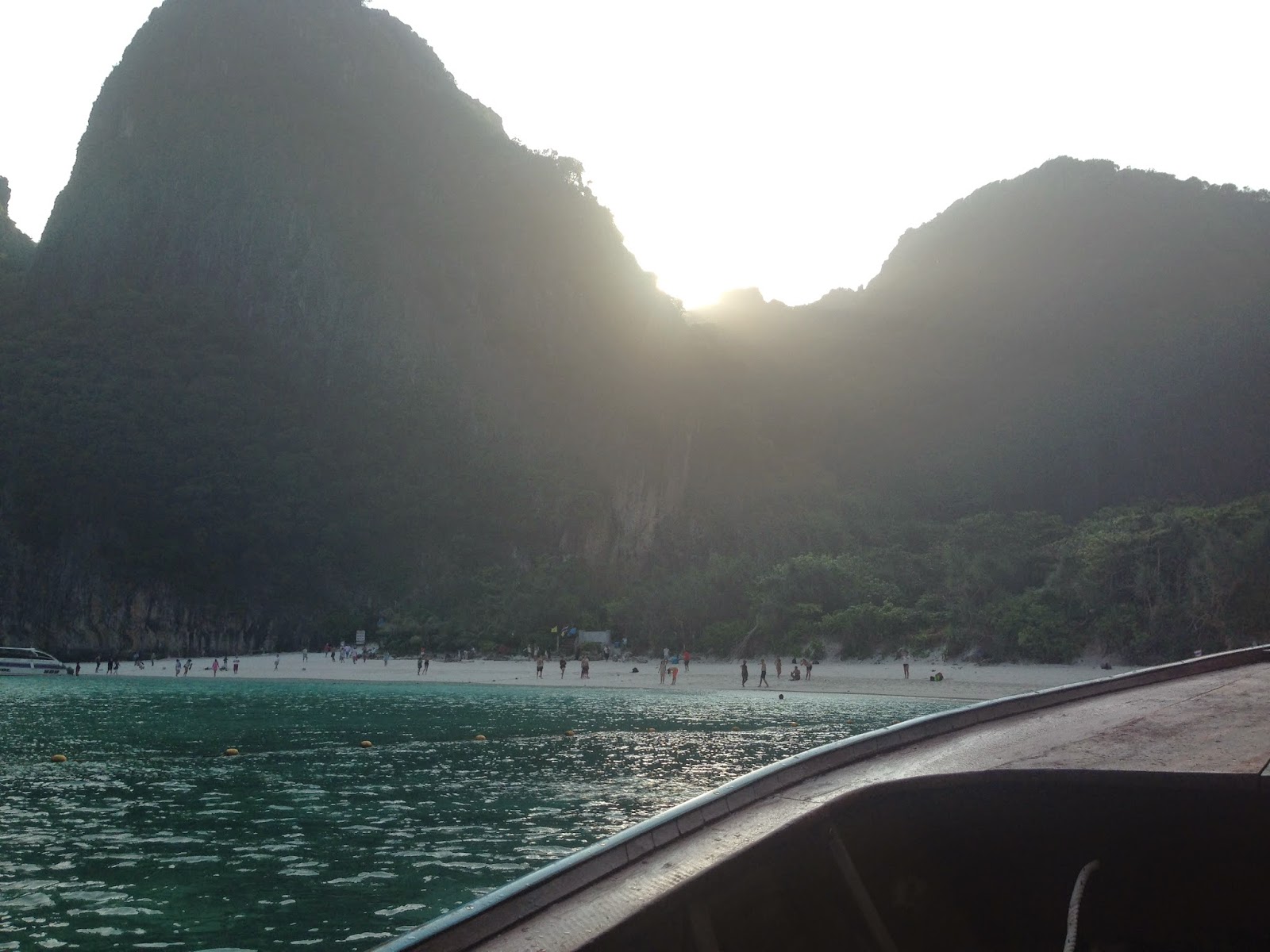 We got there as the sun was rising over the mountains 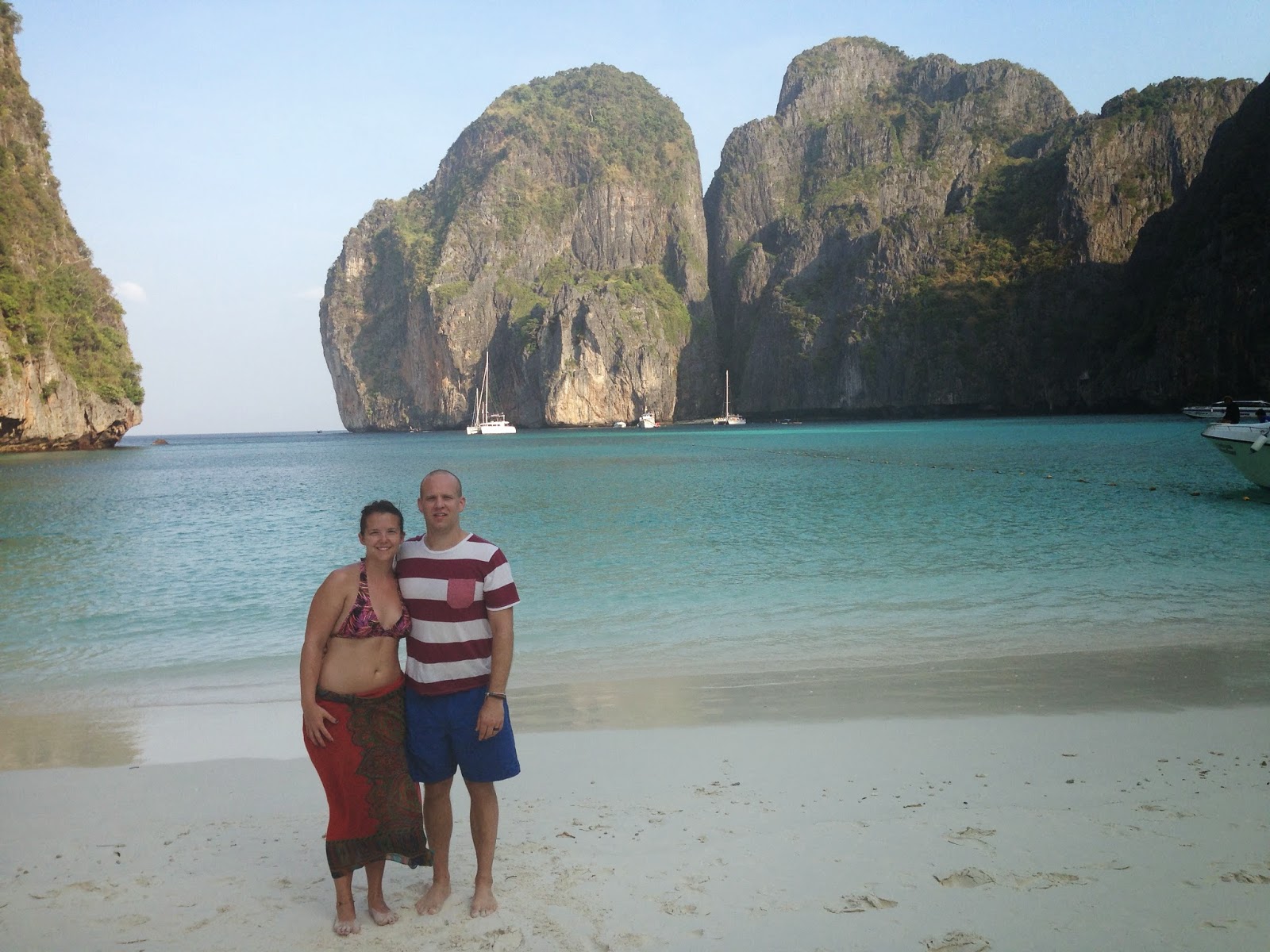 Maya Beach with no other people in the picture! 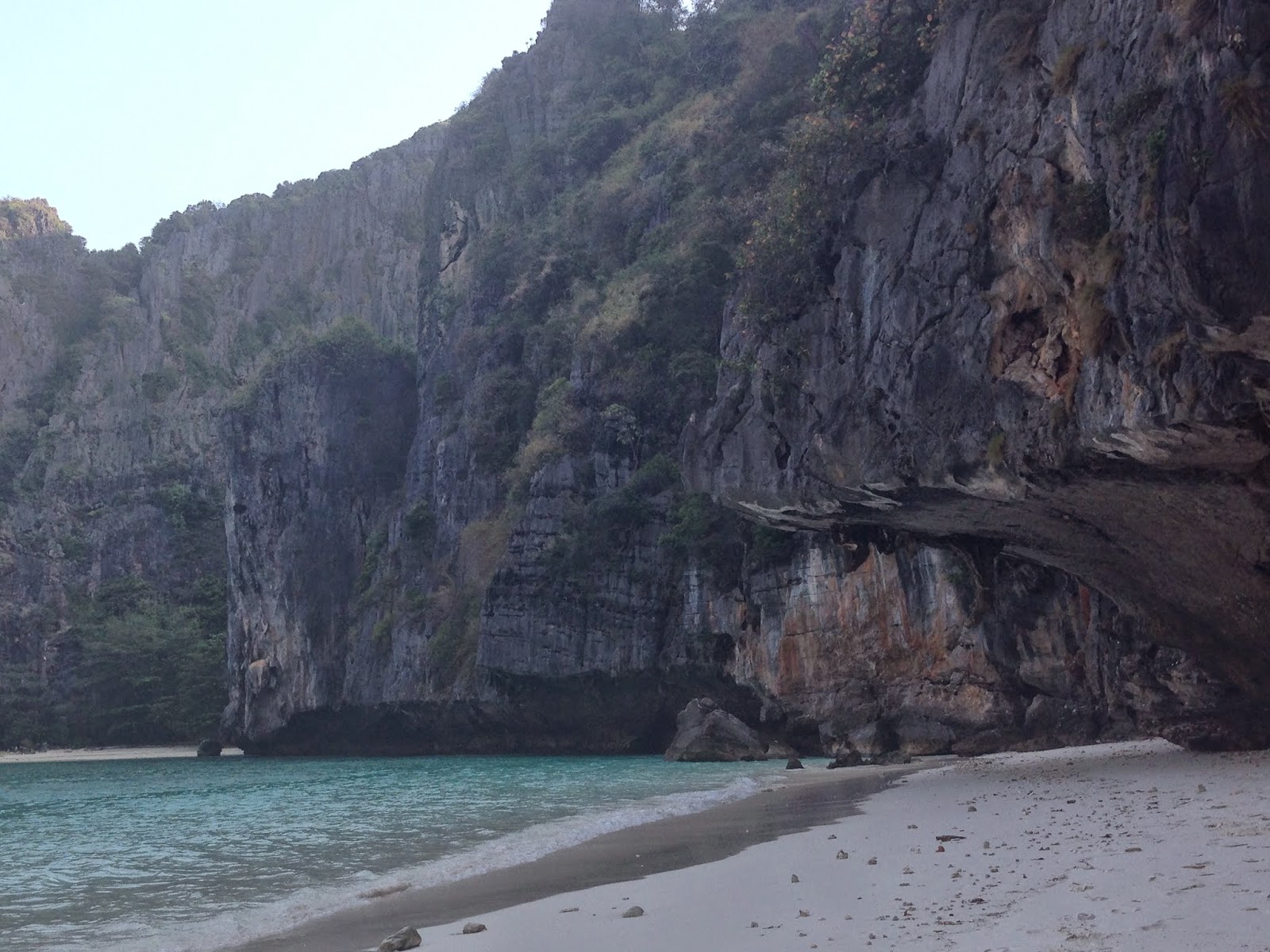 Another scenery pic of Maya Beach but again, no people or boats! 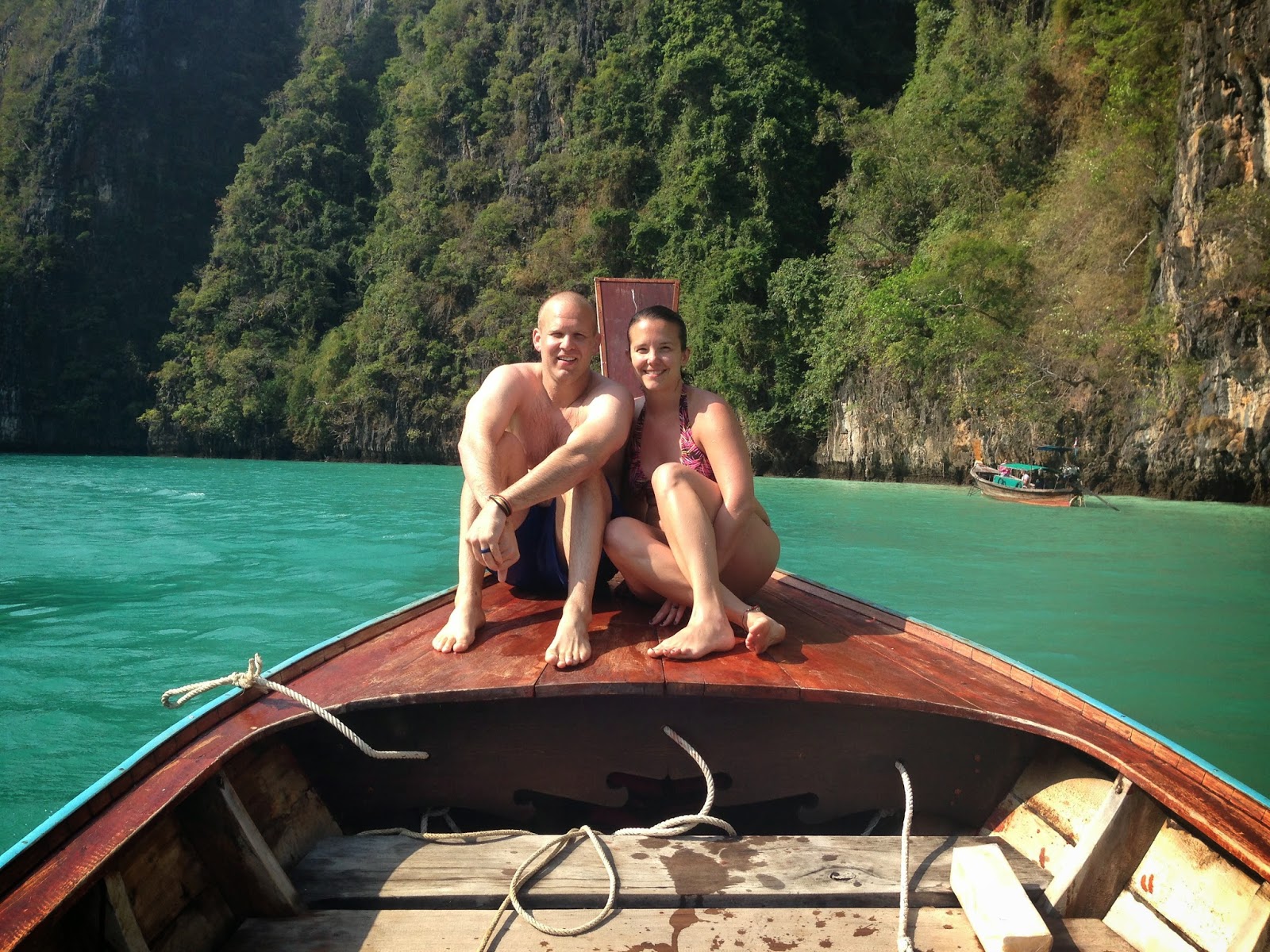 We also stopped in this little cove and got out and swam.


Maya beach is on Koh Phi Phi Le which is a different island from Koh Phi Phi Don (the main island where we stayed). We took the long boat around the island and were able to see many different, beautiful vistas. However, the Andaman Sea is not a calm place in the morning. It was terrifying. There were several moments when I thought “Ok, when we flip over…” Only kidding, it was pretty intense for a boat ride but neither of us ever felt sea sick and we trusted our driver (who has lived on Koh Phi Phi his whole life) completely. We obviously survived.


So, while Koh Phi Phi has an overall ‘party’ vibe to it there is definite potential for an excellent island experience. One just might to pay more than we were willing to in order to stay at a more secluded resort.
Phuket

I am lumping Phuket on the same post with Phi Phi because the beach experience was extraordinarily similar. Actually, I would like to recant some words I used previously to describe Koh Lanta. I said that Koh Lanta was a ‘commercially tropical’ island. I completely take that description back as it becomes increasingly more appropriate as you go from Koh Lanta to Koh Phi Phi to Phuket. On Koh Lanta there were beach shops which were obviously targeted to tourists and nice(ish) beach restaurants which also had bar services (this was only in relation to the beach we were at, I’m not sure what the rest of the beaches are like on Koh Lanta). Then, when you get to Koh Phi Phi, you are inundated by beach side bars with lounge chairs, shops selling the typical ‘beach’ stuff, people in their ‘20’s, and of course the tattoo parlors and street food vendors. BUT Patong beach in Phuket takes the cake. WOW. These three beaches have been a great reminder as to how experience can change perspective. On Patong, there were people: 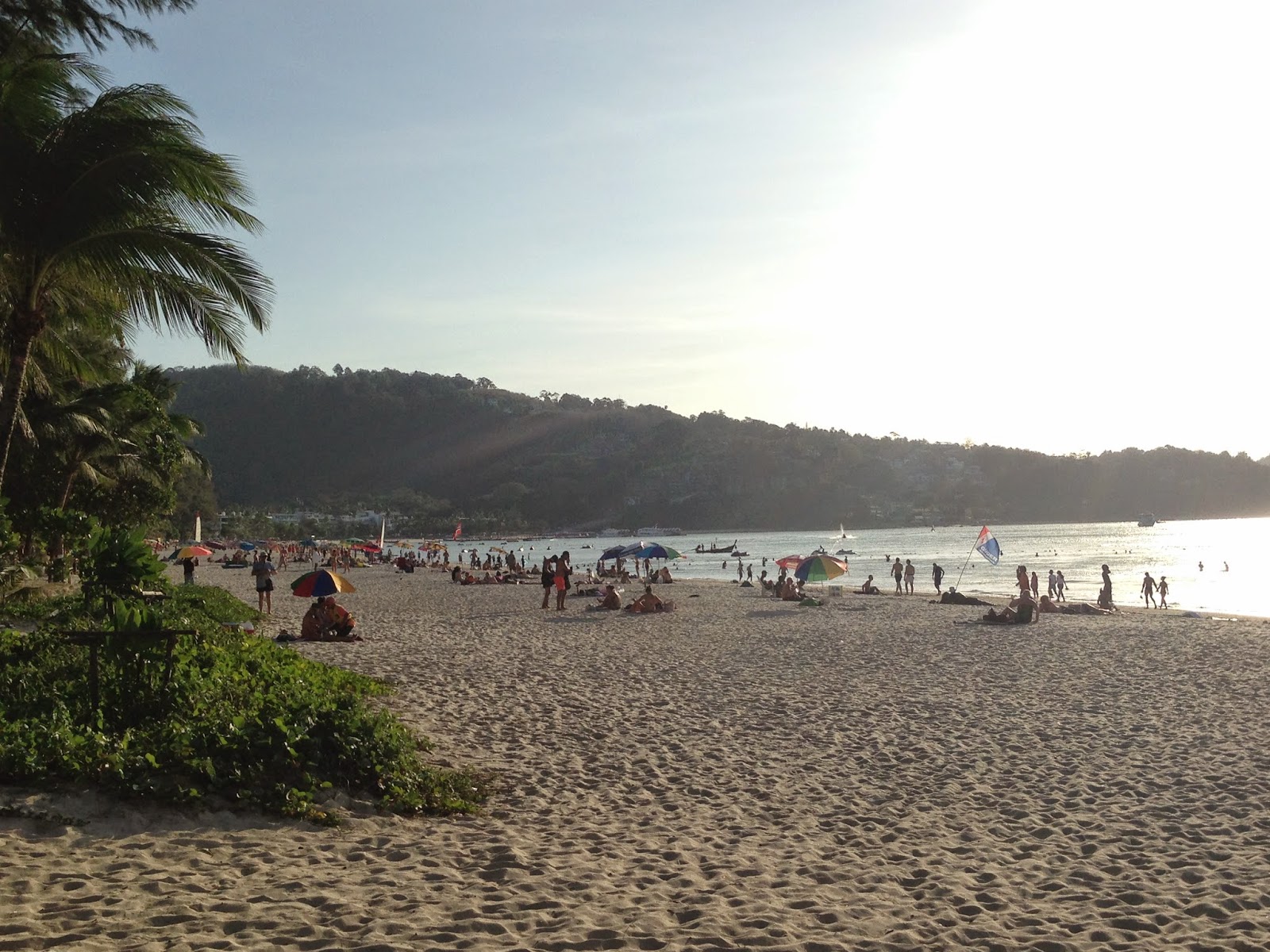 This may not look like many people but, it was more than we had seen. 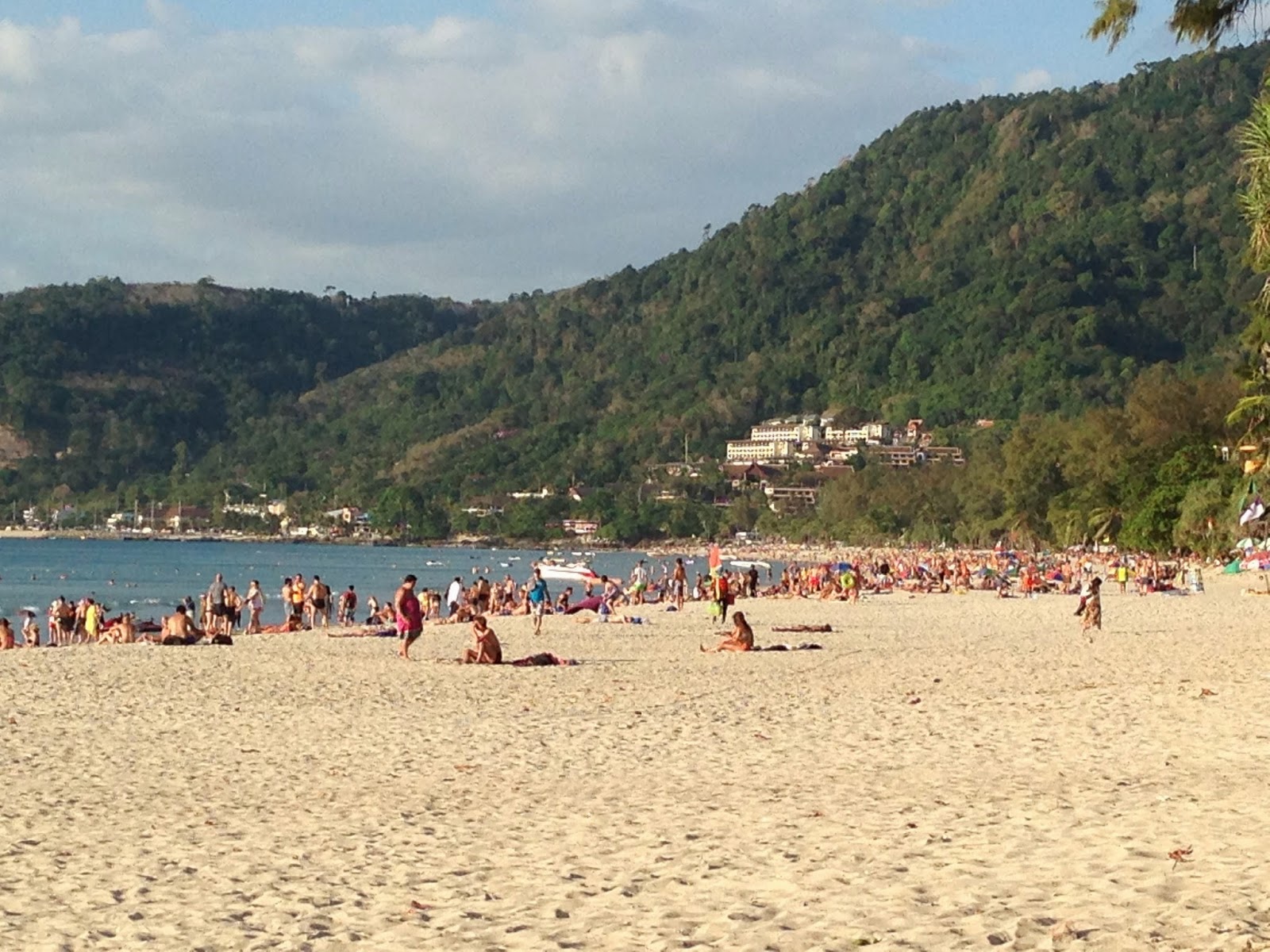 See? More people. But it is still beautiful.


It was still beautiful but there was a significant increase in the number of people. There were also people walking along the beach, trying to sell a number of miscellaneous items from selfie sticks to bracelets to beverages (this was something we did not see at Koh Lanta or Phi Phi). There were also jet skis to rent and parasailing. Then, when you get off the beach, the scene is like something I have a hard time describing; in short, it is the quintessential less-than-glamorous beach party scene. It is Bourbon street meets Austin’s 6th street with some Panama City mixed in there. We had a beer there and then caught a taxi back to our hostel (which was 45 minutes away, thank heavens!). Actually, on our way back to the hostel, Jared made us have a stop at the Big C grocery store. He was hankerin’ for peanut butter. We found some! Then it was to dinner and to hostel and to bed.


That was actually only the account of the beach portion of Phuket, called Patong Beach. We stayed in Old Phuket town which was much different and more Hedges friendly. Our first night there was a Sunday and there is a Sunday night market which we went and walked through (we love our night markets and street food!). The next morning was the super bowl so, while Jared streamed it in our hostel room, I went for a run and got breakfast. Then, before our beach adventure we went to see Wat Chalong, which is the oldest Buddhist temple in Phuket. It was elaborate, richly colored and stunning. 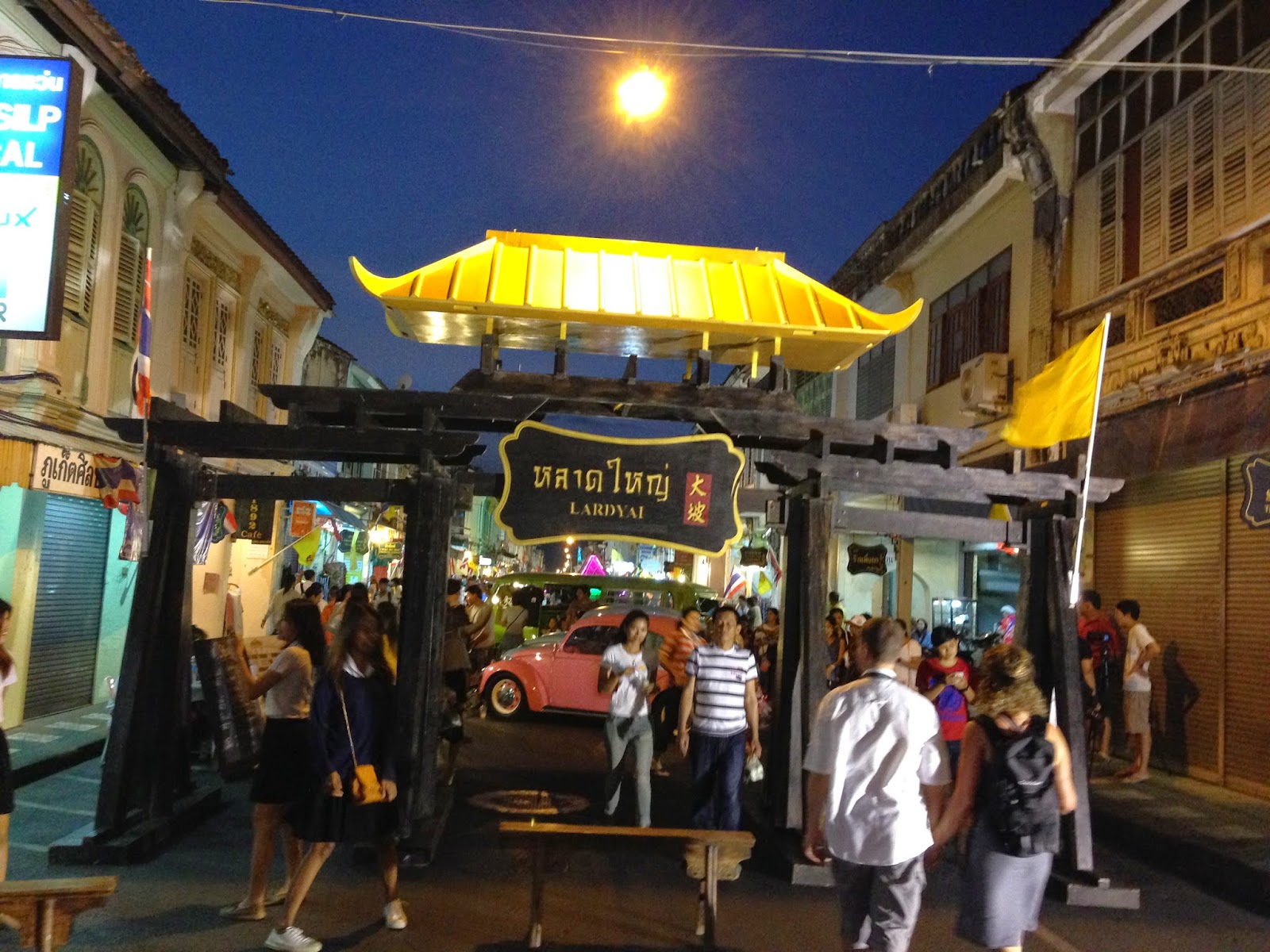 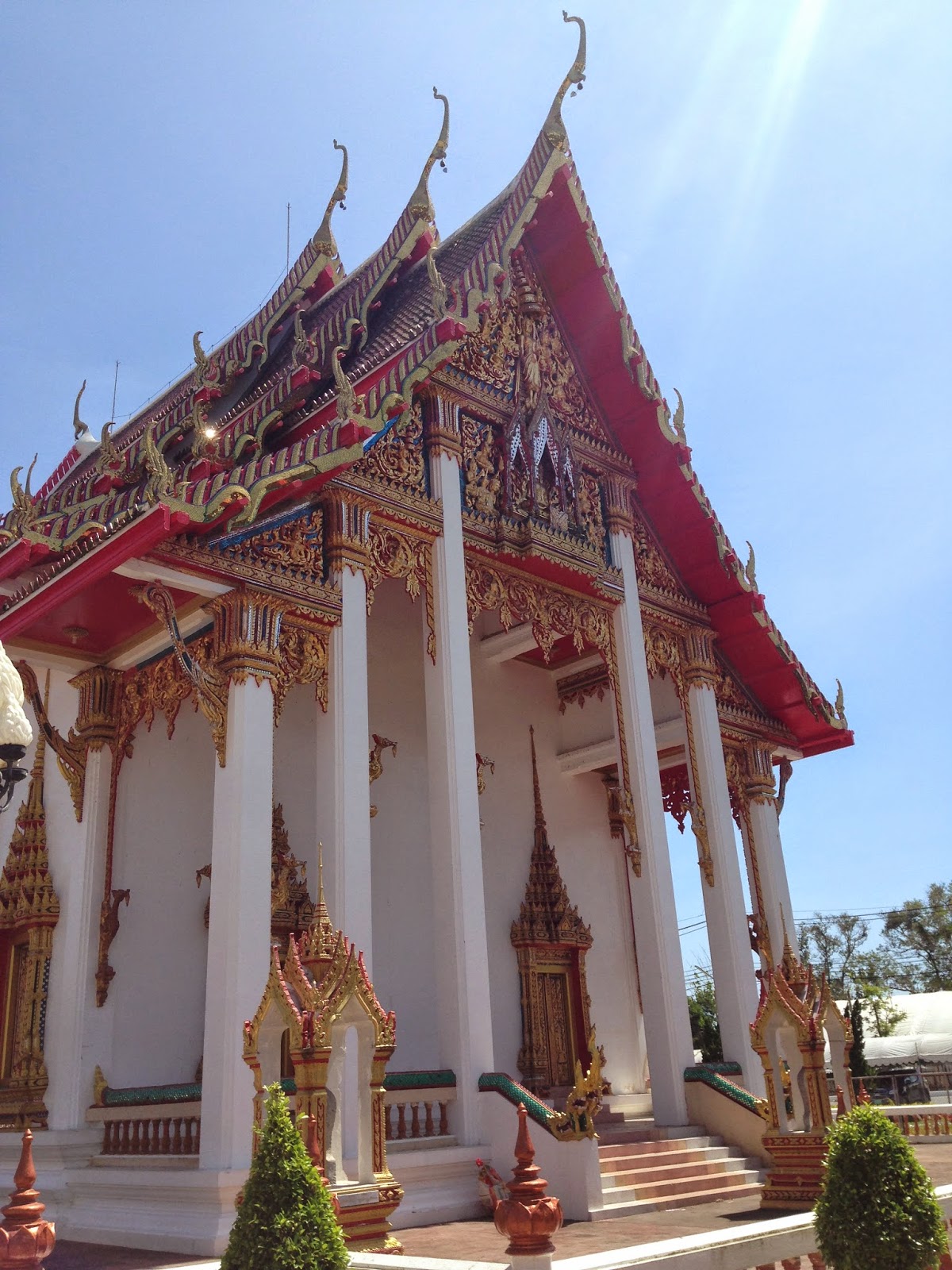 Stunning.
The beach scenes at Koh Phi Phi and Phuket were definitely not our style, but we also experienced parts of both that were redeeming for us. The Thai culture continues to prove to be diverse, intriguing, accepting, and delicious! We are currently in Khao Sok, a national rainforest park, and then we will be heading to Bangkok! We can’t wait to see what more Thailand has in store.