Day One:
We made it! We made it! I don't know how many times we looked at each other and said "What are we doing?," but we are here and safe and ready to explore. We decided to try and beat the jet lag by going to bed when we arrived at our hostel at 3AM Singapore time (1 PM back home) and sleeping until it was a normal time to wake up. We woke around 9 and enjoyed a free breakfast before heading out for the day. First, we walked to Little India: 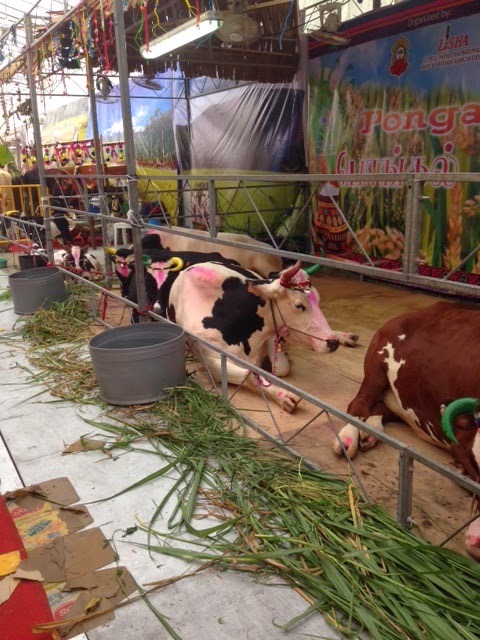 There we saw some festivities related to the Pongal festival, a Hindu harvest celebration. These cows were sittin' pretty and appeared to enjoy being the center of attention. We also visited a Hindu temple and saw several different shops with beautiful wares. After that, we walked to a 'hawker center', which is an area with several different food stalls serving all types of different food. One of the suggestions we both read about was to go to the food stall that the locals were going to. So, that's what we did. 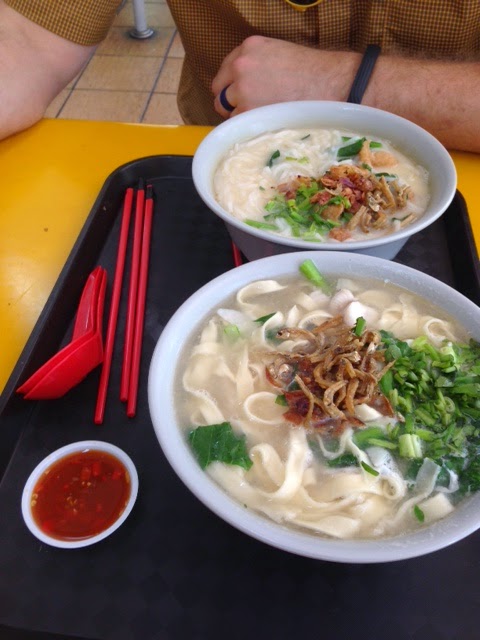 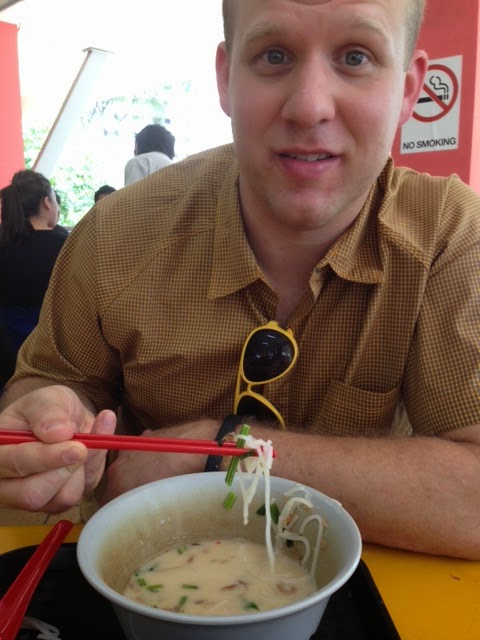 We both got big ole bowls of noodle soup. Mine had fresh fish and Jared's was fried. The noodles in my Bai Mian bowl were more like egg noodles and the ones in his Bee Hoon were rice noodles. After eating we epitomized the tourist experience by hopping on a 'Hop On Hop Off' bus and rode around the city. We didn't do much hopping though and only got off at the Marina Bay Sands mall/casino/hotel. Holy consumerism, batman. It was insane. I realize I am not a very fancy person but I have never seen so many high end stores. Check out the Louis Vuitton: 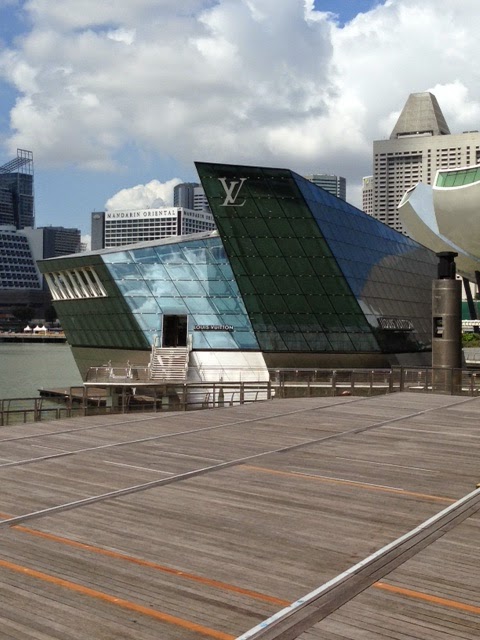 ﻿
﻿
﻿
And I'm pretty sure it has two levels... I didn't even realize Louis Vuitton made enough items to fill two floors. Of course we couldn't buy anything because, you know, shipping would be unbelievable.

We rode around some more on the sightseeing bus (city-sightseeing.com) and the next place we visited was Fort Canning, which was used as a fort during Japanese occupation during World War II. Apparently there are underground bunkers (the battle box) and other cool underground tunnels, but unfortunately that part was under construction. However, we were able to see what was formerly the Governor's mansion (but is now a hotel), a spice garden, the supposed tomb of the first Malay king, and a small archaeological dig. 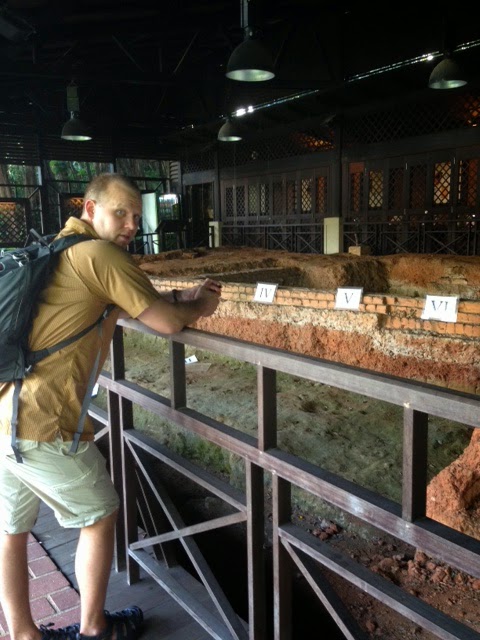 Some of the items from the dig date back to the 12th century, but the area they excavated was so small that Jared and I were wondering why they stopped excavation. Maybe it is because of whatever is behind this: 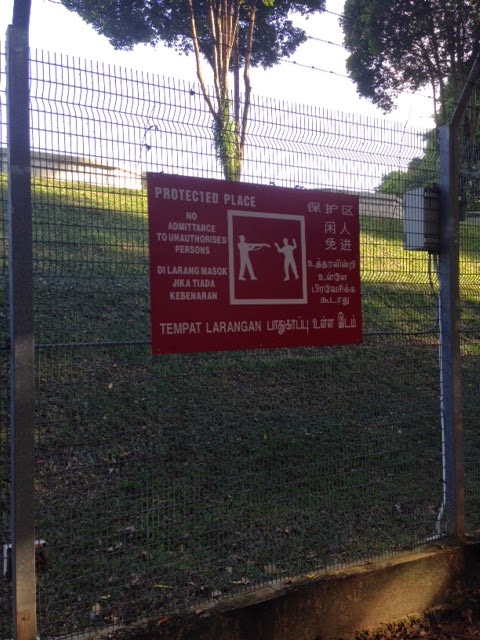 Just kidding. Behind that is just a reservoir. If you ask me, that sign is a little intense for 'just a reservoir' I mean, "If our electric fence doesn't get you then someone will shoot you in the head" should be reserved for something a little more important, you know, like a dam. Day one ended with dinner in Little India and back to the hostel.
Total miles walked: 12


We started the day by going to Marina Bay Sands to nail down the truth about a rumor. We had heard that with a passport admission to the viewing deck of Marina Bay Sands was free. This, was not true. Because as the lady at the sugar cane juice stall says, “Nothing is free.” However, we did determine that we could access the restaurant bar area at the top of the viewing deck if we purchased food or a beverage. The cocktails were an extraordinarily expensive S$25, but only slightly more than a ticket to the top sans beverage, so we opted to come back in the evening and have a drink and see the view. 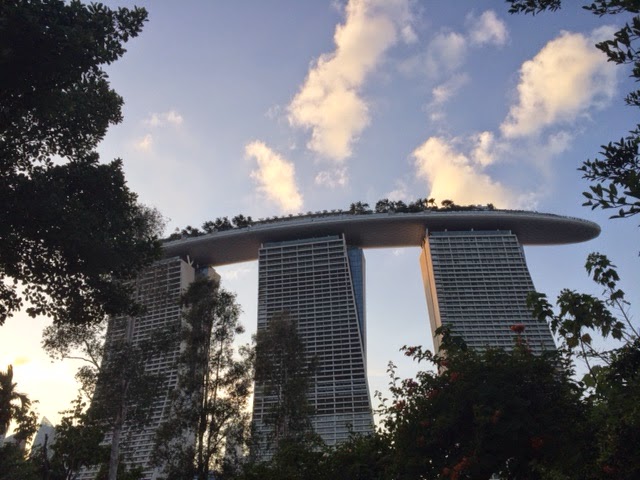 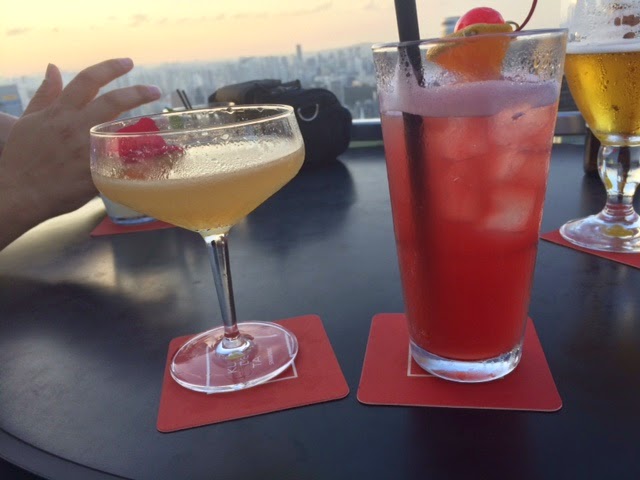 
An adventure to the Botanic Gardens was well worth the effort, as admission to the gardens themselves was free (the orchid garden cost S$5 to get in). These gardens do not even compare to the botanic gardens we have seen back in the States. It was a huge park with great foliage variety. Singapore is also the only city besides Rio de Janeiro to have a rainforest within the city limits. 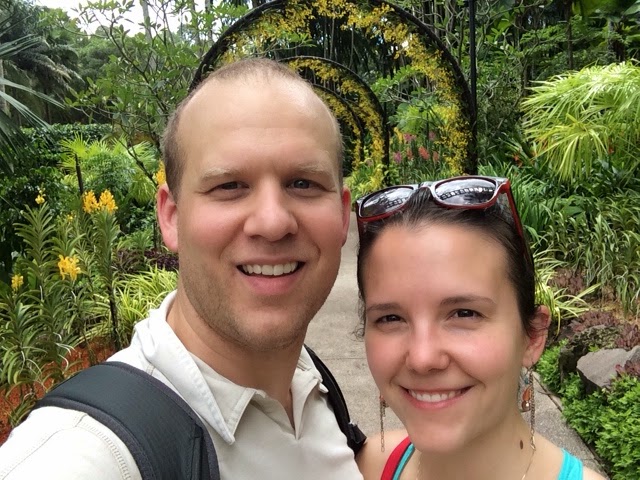 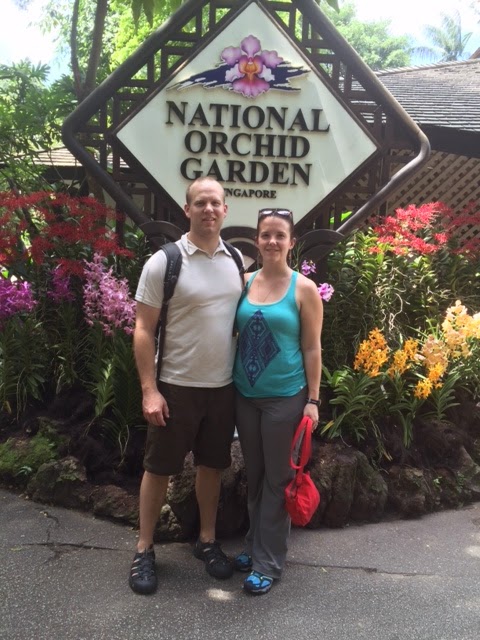 After another hawker center lunch, we ventured to the Bugis market, which is a ginormous complex of vendors selling everything from fruit juice to a flying, twirling Princess Elsa. We walked around for a bit, but then my old lady back had had enough and we went back to the hostel. After a short rest, we went back to the Marina Bay Sands for a cocktail and a view (see above), and then dinner at a Turkish/Mexican fusion stall. Jared got mashed potatoes on his burrito. Just kidding, but it was an option and I did chastise him for not fully embracing the culture. We did pass on the KFC “Original Recipe” curry bucket though.


This was slated to be our ‘easy’ day. We woke up, did laundry (we did not plan on having to stay with the laundry for the whole 1.5 hours but it turned out to be a welcomed break), ate breakfast and walked around our little hostel neighborhood for a while. We left around 11 and went to Clarke Quay (pronounced "key"), where we sat with a cider and people watched for an hour or so. We then had our first spontaneous adventure and walked down the road a bit to a Cat Café. Yes, a cat café. We ordered a latte and sat in a room with 13 cats and some other cat loving patrons. There was a little library, board games, and some relaxing music. I could see myself frequenting such an establishment if I didn’t own a cat and had access to one. And, yes, I realize how this affects my cool status. 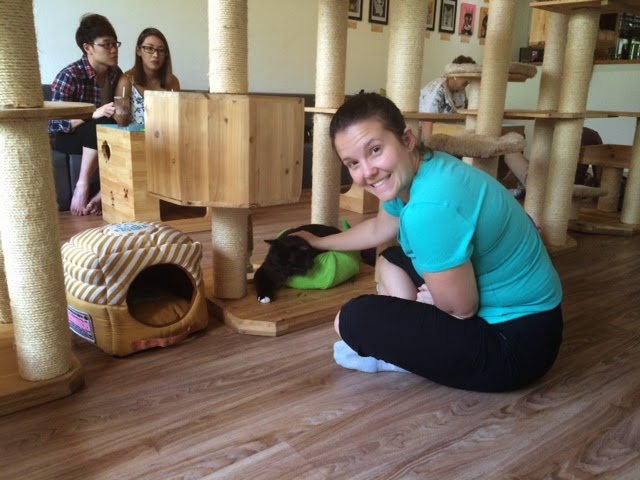 
After chillin’ with the cats for a bit we hopped on the metro and headed to the Southernmost point of Continental Asia. This was part of an area called Sentosa, which is where Universal Studios Singapore is located along with manicured beaches and a pirate ship for the kiddos. It was a bit overwhelming and reminiscent of Disneyland. We saw the sites, snapped some pics and headed on to the Gardens by the Bay. We didn’t have enough time to go through the Cloud Forest or the other observatory, so we paid the S$5 each to get access to an elevated walkway among the giant steel trees. Again we were treated to some stunning views but the height totally wigged me out. I think in my old age I am realizing how terrifying it is to be suspended in the air without either a. a personal parachute or b. a whole lot of something fluffy below me. The trees lit up and there was a light show coordinated to music. Jared enjoyed it from the suspended walkway and I watched from below J 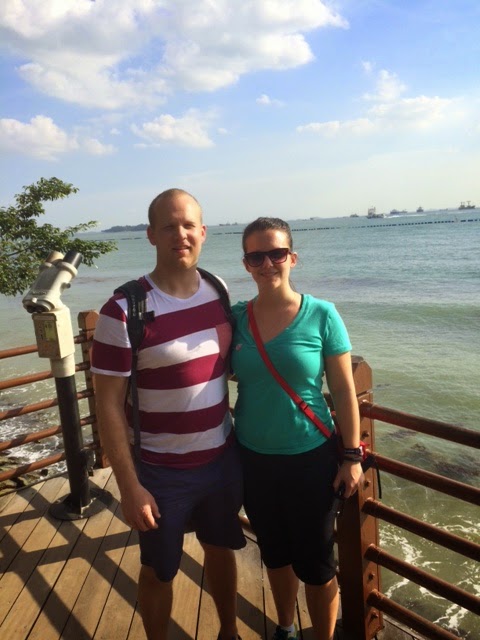 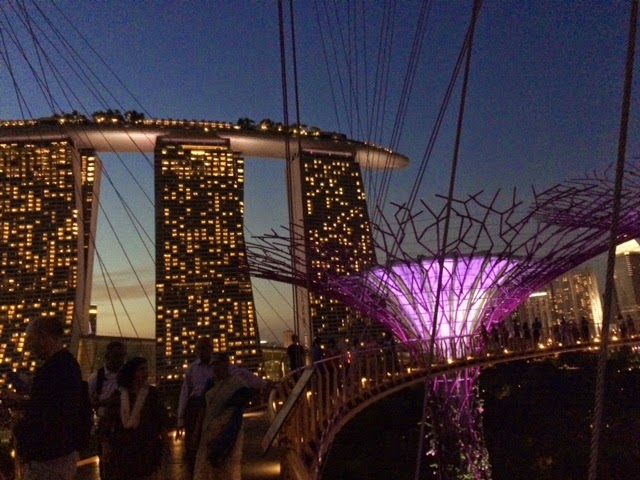 
We then headed back to the hostel, exhausted after our planned ‘easy’ day turned into another 9 miles of walking.


We both really enjoyed Singapore City and agree that it would be a great place to return. We feel as though, as a friend of the family indicated, it was a great place to start our Asian adventure since it is a more ‘western’ city. We visited, either intentionally or by happenstance, six different malls. All of equally large size. We walked for miles underground and commuted via efficient, clean underground transportation. Our jam-packed three days here still felt insufficient to fully experience Singapore. One full day could easily be spent at each Gardens by the Bay, Sentosa and Marina Bay Sands. Similarly, we feel as though we could have spent more time at the Botanic Gardens and Bugis Market.
Posted by Christy at 7:08 AM