We spent five nights in Da Lat and loved the city and surrounding area. Da Lat is the primary producer of fruits and vegetables in Vietnam, and as we drove the windy mountain path to arrive in the city, we saw hundreds of greenhouses dotting the landscape. Jared was feeling a little tired the first couple days so I did some independent city exploration and walked through the city center, admiring all of the beautiful flowers (they're everywhere in Da Lat), then toured the Crazy House. The Crazy House is an artistically designed home + hotel. The architect is the daughter of aristocracy and studied in China and Russia; she still lives on the premises. The hotel rooms are designed and named after animals in homage to different countries. The Eagle is the room for the United States. As you can see from the pictures below, it is a pretty crazy house but is beautifully designed to intermingle concepts of nature with the structural components as well. 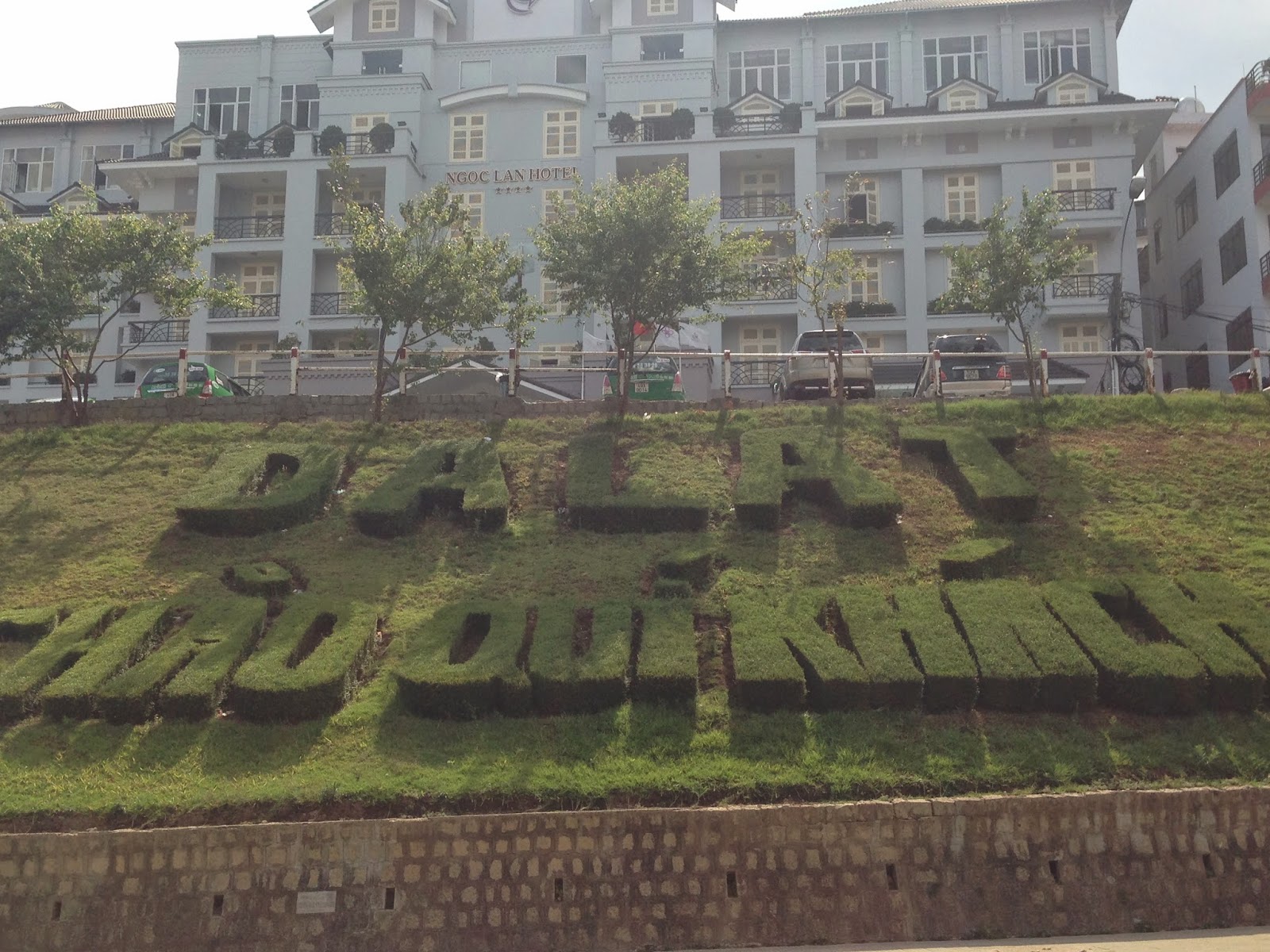 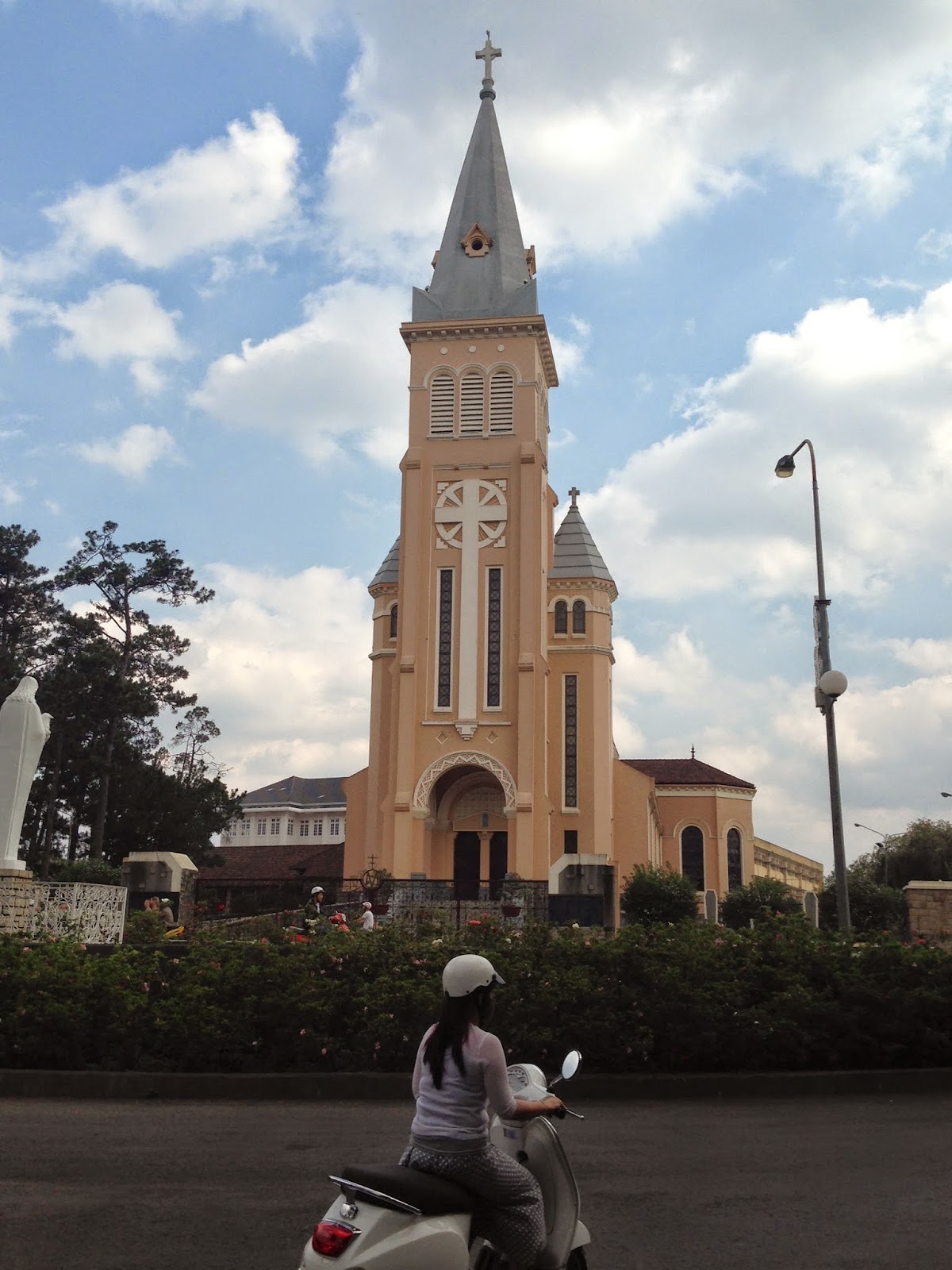 The main church in the city, I walked past it no less than five times and was never able to go in. The stained glass on the outside was something that I'm sure reflected nicely on the interior. 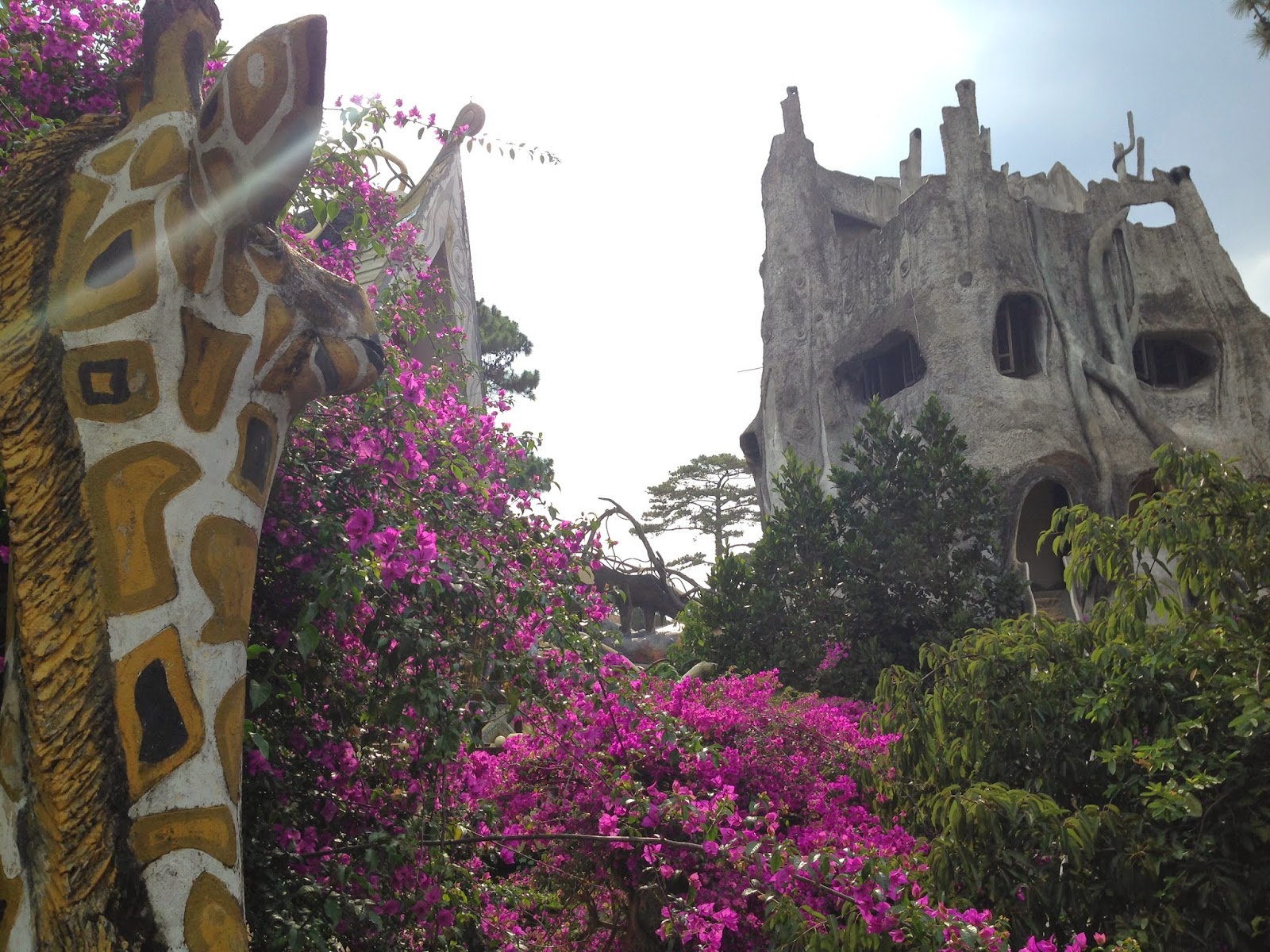 It is like a crazy hive of rooms, passages and balconies 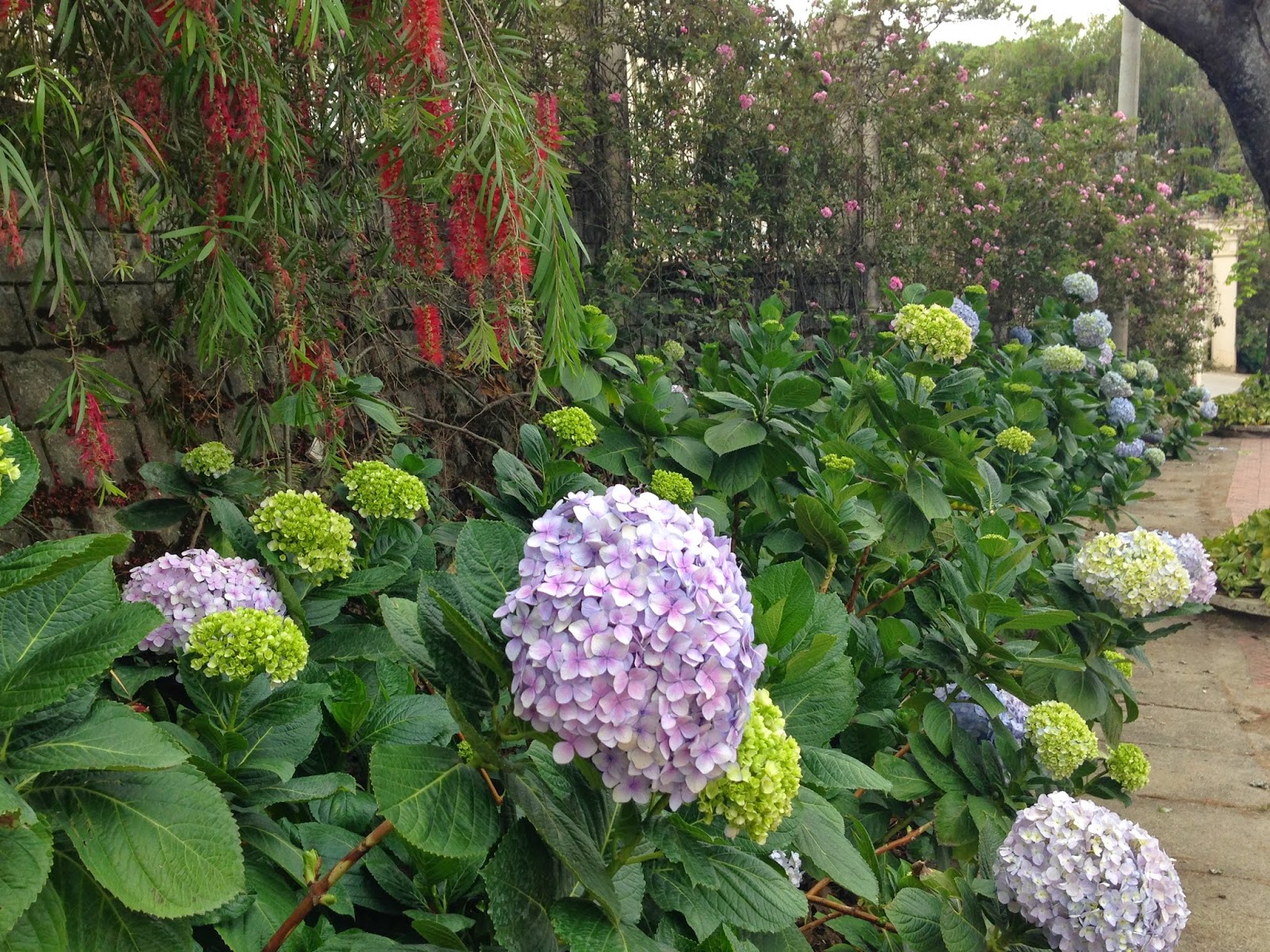 I could have just walked around all day (oh wait, I did!) in the city that was more of a garden than a cityscape. 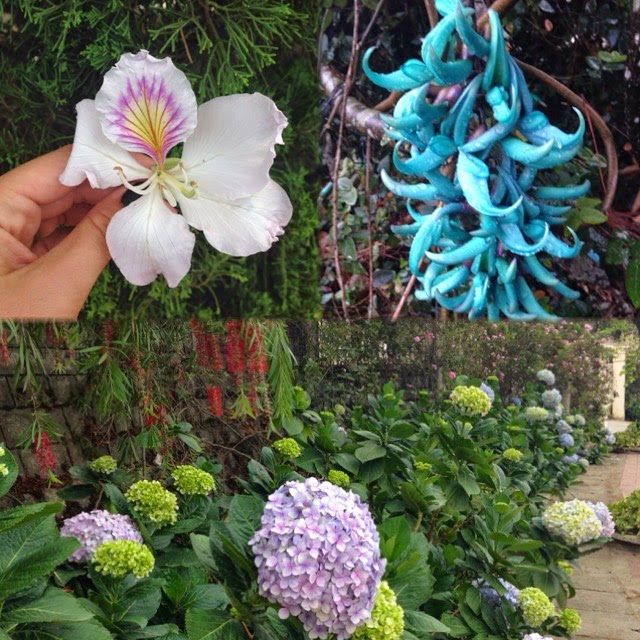 A collage of just some of the beautiful flowers.


Once Jared was feeling up to it, we rented a motorbike and took a trip to Elephant Falls. This is a quaint little waterfall tucked away near a Buddhist temple that locals and tourists both enjoy. The exploration of the waterfall and temple were fun enough but it really got interesting on the ride home. As you can imagine, rain makes for a very interesting ride on the motorbike. So interesting, in fact, that we stopped en route at a little restaurant to have some lunch and wait out the downpour. This was perhaps our first real experience in Vietnam with someone who spoke no English. We, of course, were her equals in our knowledge of Vietnamese. As I tentatively entered the dining area and used my eyes and arms to ask if we could eat she responded by showing me some noodles and I gave her the thumbs up. Out came two steaming bowls of a soup composed of a mystery meat (Jared assumed beef), some green onions and a cube of a dark colored gelatin. We are pretty sure this gelatinous substance was congealed blood. I abstained from tasting the gelatinous glob but politely sipped my soup and my soda until the rain cleared enough for us to be on our way. 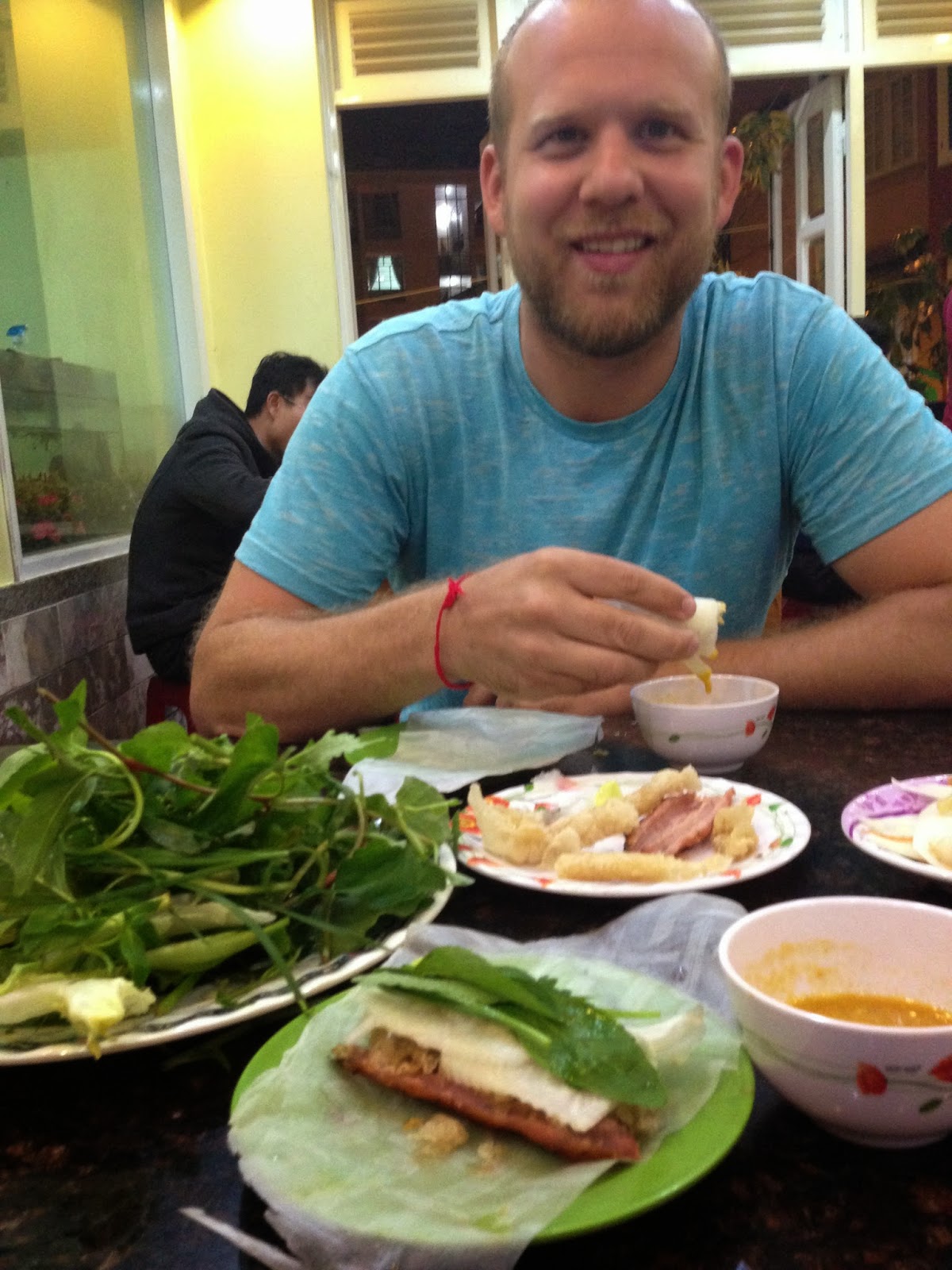 This was actually at a restaurant near our hostel. You get all of the components and then make and roll your own spring rolls. It was so delicious! 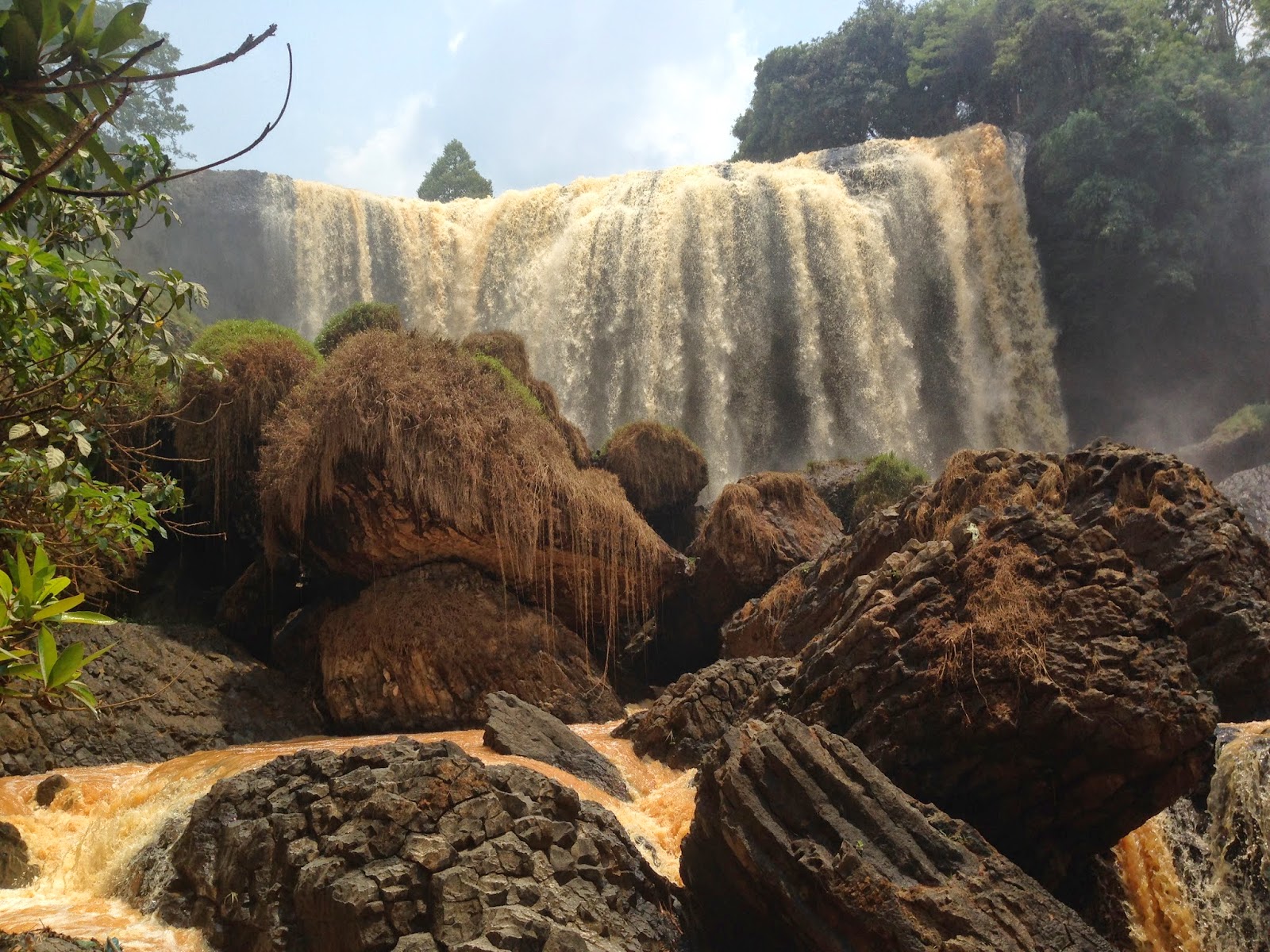 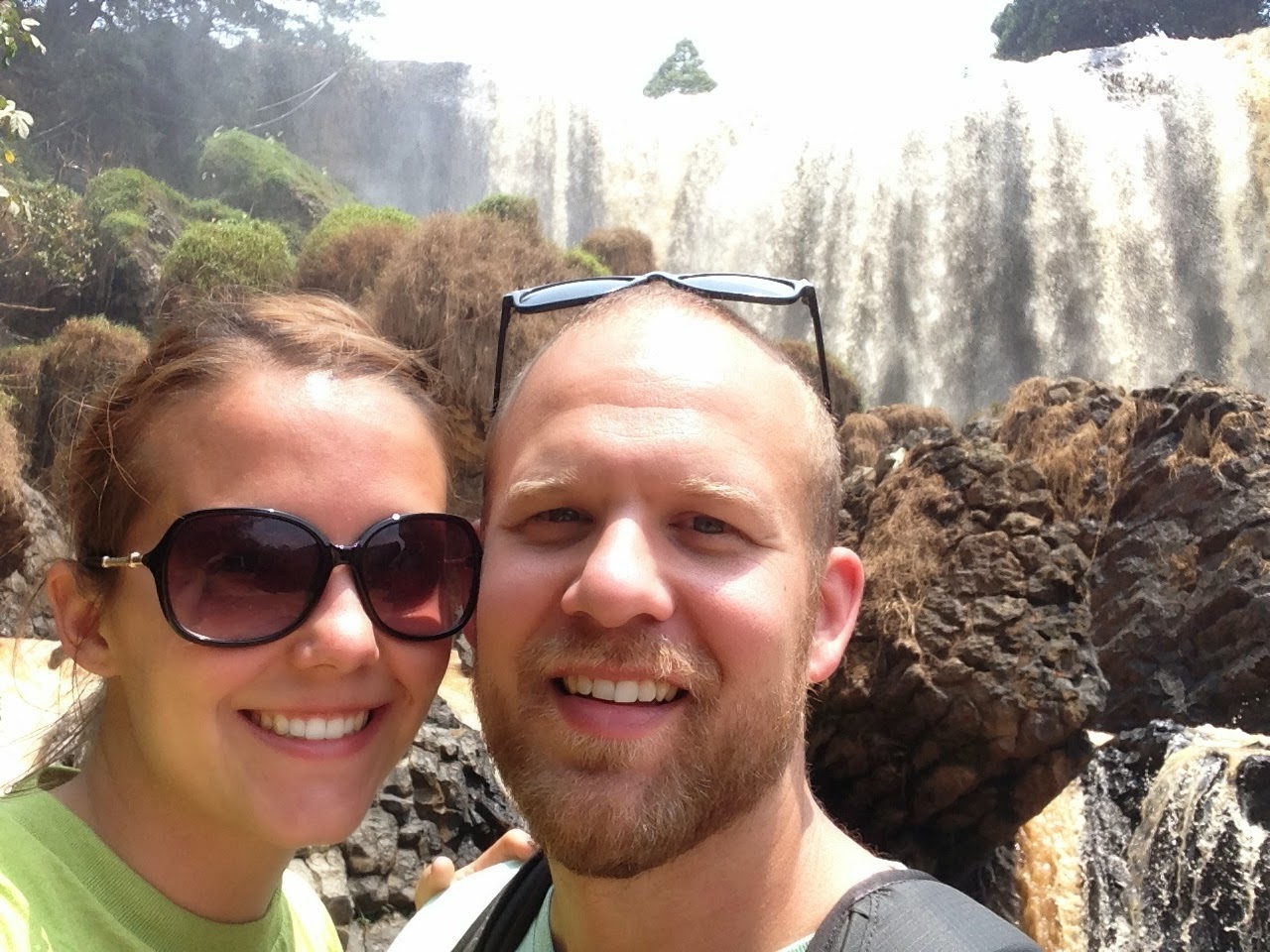 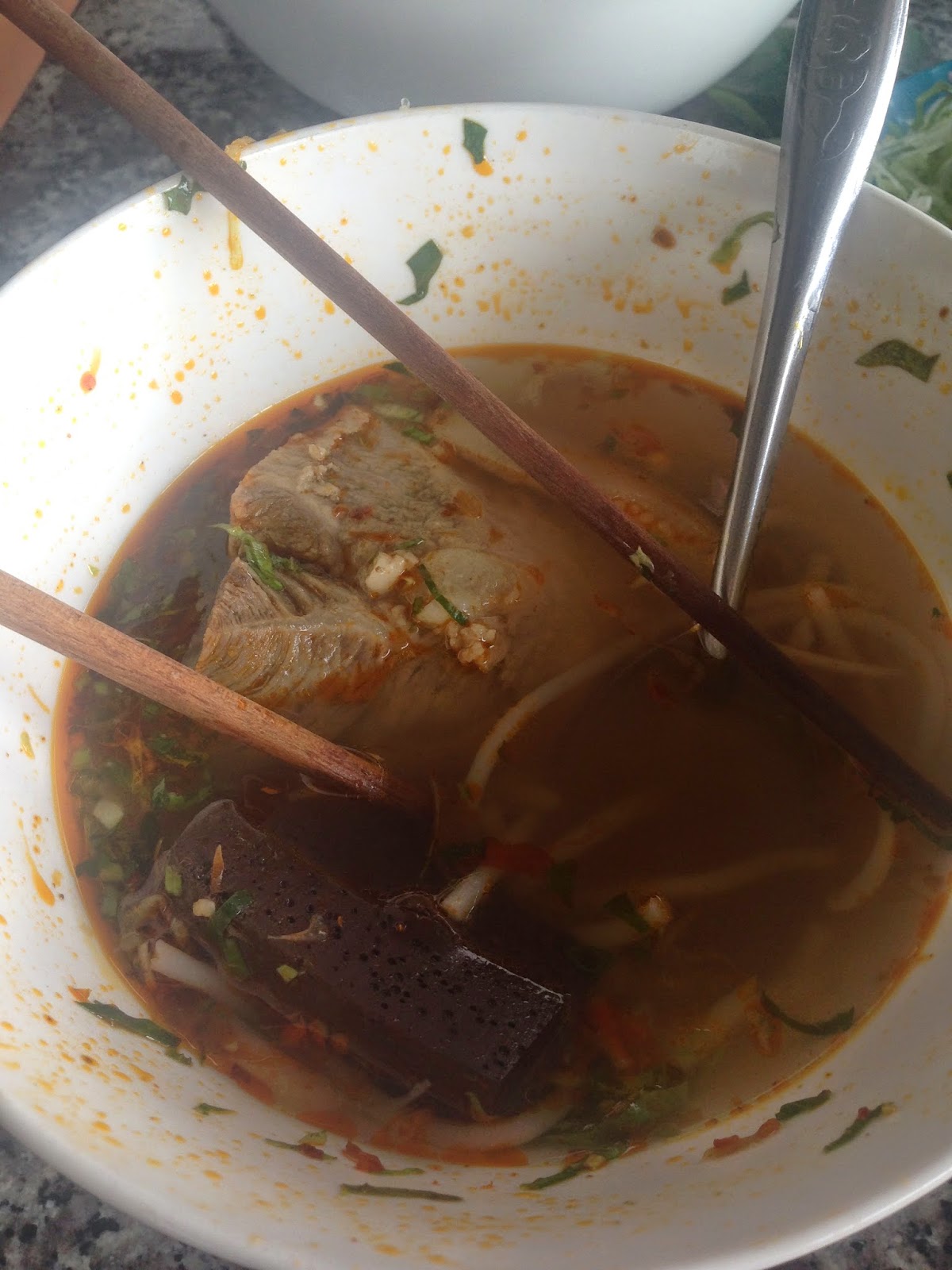 The next day, we checked out of our hostel and went on a day hike with a guide. The hike started in a local village called Chicken Village, progressed through the vegetable fields and mountains, and ended at a manmade lake. At the lake, we took a little boat to meet a car for the ride back into the city. We spent a little over three hours on the hike and the first two were almost straight up. We ate lunch just before the rain started and halfway slid back down the mountainous slope to the lake. Between the two of us, I think we picked around 8 leeches off our socks, shoes and ankles. Leeches are also quite hard to kill, very rubbery and resilient. It was spring in Vietnam while we were there and afternoon rains had just started to be a common occurrence. Several of the locals informed us that during the actual rainy season it will rain for days without stopping. I couldn’t help but think of Forrest and his description of all the different types of rain in Vietnam, “One day it started raining, and it didn't quit for four months. We been through every kind of rain there is. Little bitty stingin' rain, and big ol' fat rain, rain that flew in sideways and sometimes rain even seemed to come straight up from underneath." I'm thankful we only experienced the warm afternoon shower version. 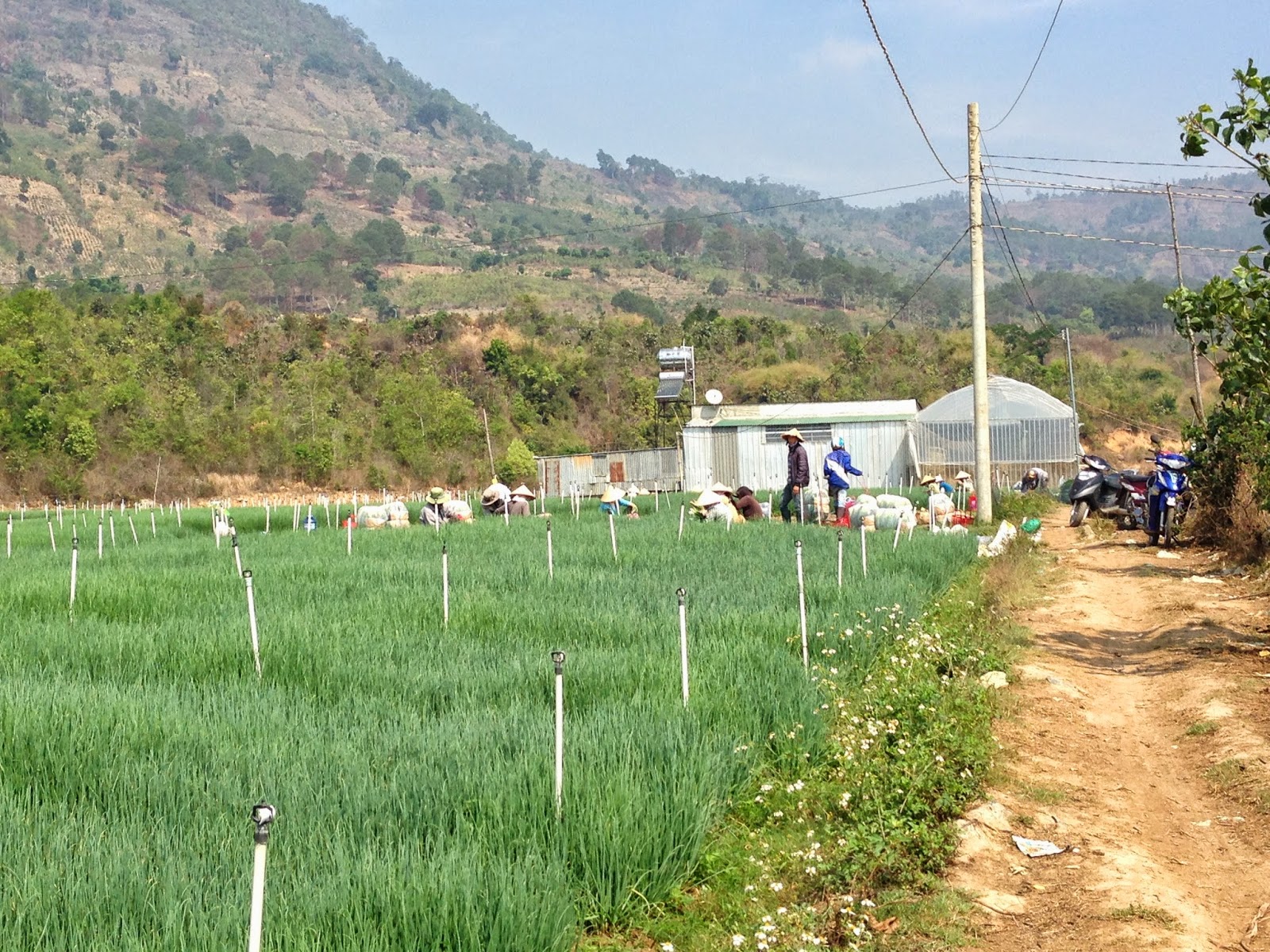 Starting the hike through the fields of Chicken Village Looking back on where we started 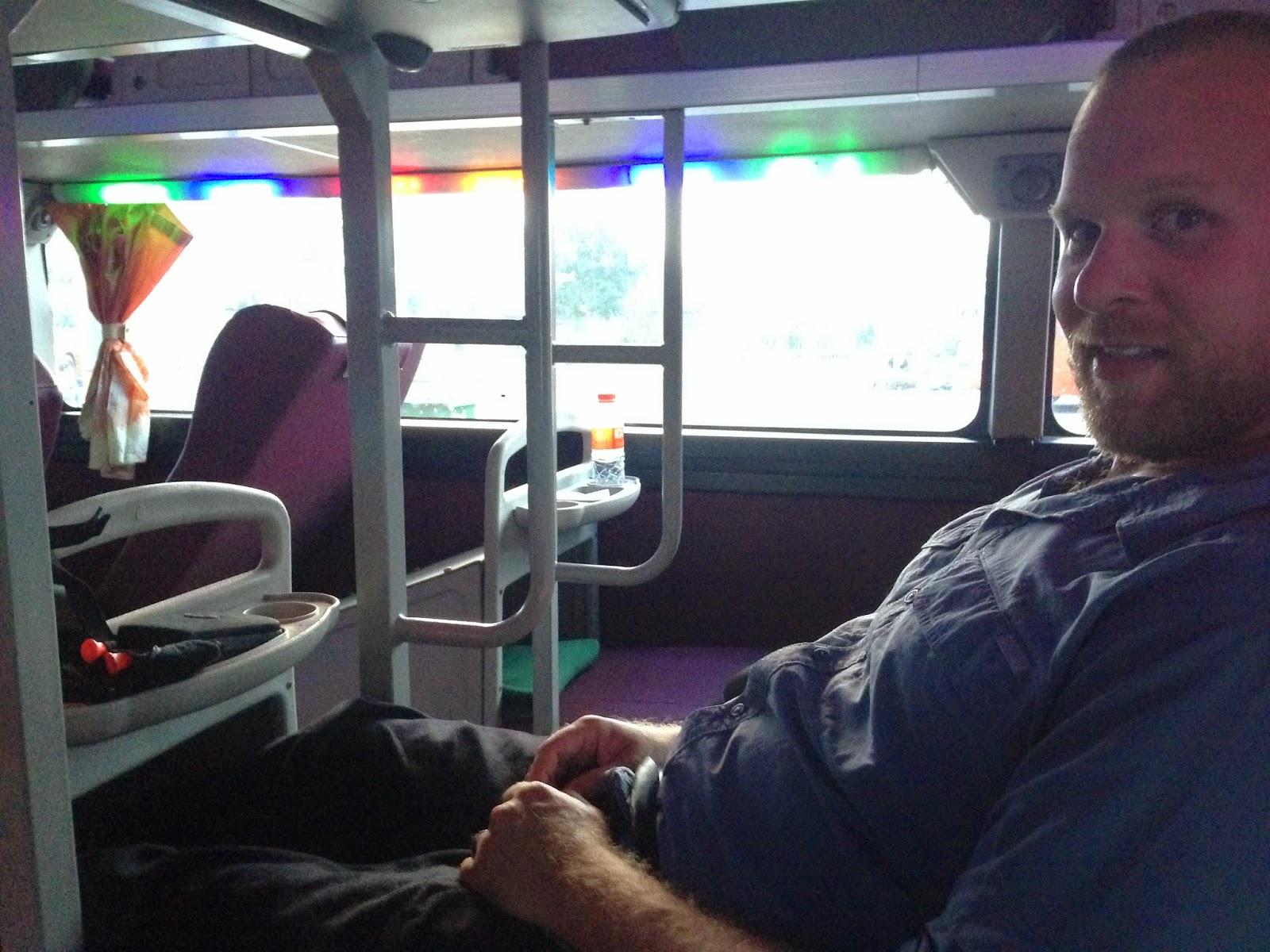 Jared in his sleeper cubicle
The bus we took was technically a ‘sleeper bus.’ Now, this is something that we were avoiding rather diligently after reading  this and similar accounts of the nightmare that is a night bus in Vietnam. But, we were booking through a reputable company and the journey was only going to take 6 hours. We weren’t planning on sleeping anyway, which turned out to be a good thing. There weren’t individual, stacked beds as was described in one account but these individual pod-like compartments. Each person had a separate space and crammed their legs inside the pods while the seat back reclined. I tried to get a picture but it was hard to capture the whole scene. I am only 5’6” and I found it ridiculously uncomfortable. Jared actually didn’t mind it so much, perhaps because the duty of backpack guarding does not fall to him whilst in transit.


The pod bus took us to Ho Chi Minh City, formerly Saigon, where we spent the last two days of our visa allowance before flying off to Hong Kong.
Posted by Christy at 3:52 AM