Hoi An is a heritage city with tons of shops and restaurants. We easily understood why it is so popular with Western and Eastern tourists alike. We stayed at a homestay (like a hostel but the owners/managers live onsite) that had free bike rentals, good WiFi, and a passable breakfast (One thing that we thought was quite a humorous and interesting part of the Vietnamese culture was the prevalence of the baguette. It seemed to be the one obvious remnant of the French occupation and it made an appearance at almost every meal.). The first afternoon we checked out some bikes and headed down to the ‘heritage’ area of the city. This consisted of traditional Vietnamese style shops- at least in architecture- and restaurants lining the canal. The area was packed but we found a cozy place for lunch and mosied around looking at different shops. It was a pleasantly passed afternoon and we went to bed early in preparation for our visit to the Cham temples the next day. 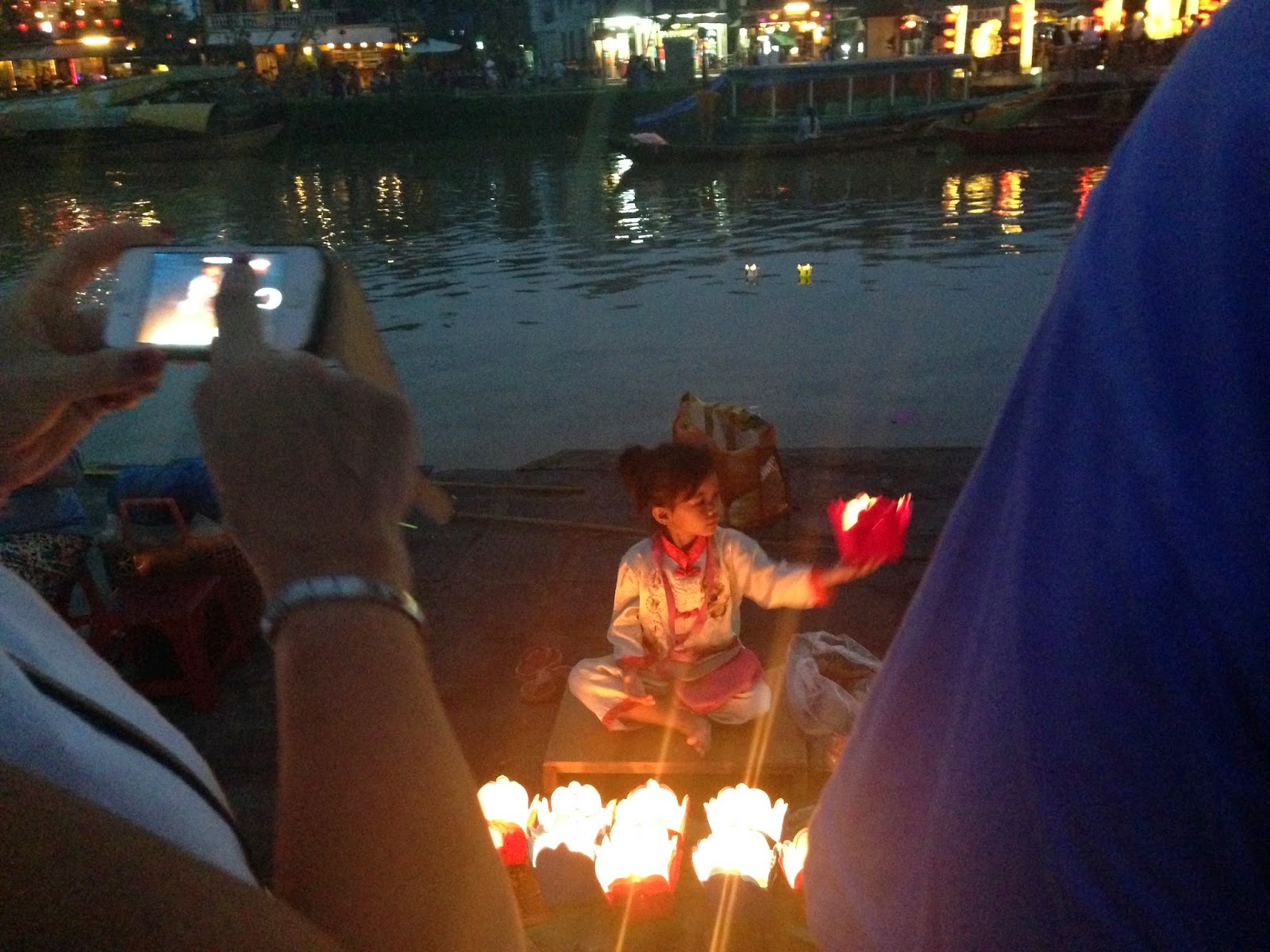 These little girls were all along the river selling lanterns to light and float in the river. I was tempted to get one but my always environmentally oriented husband pointed out that the lanterns just accumulate in the river.
The Cham ruling period coincided roughly with the Khmer reign in Cambodia and the construction of the impressive Angkor Wat. The similar style of architecture can be seen in these ruins. This area of Cham temples was part of the Cham capital before conflict forced them south. The area is surrounded by mountains and has a river running through it. The temples were first discovered by the French and then forgotten during and after the war with the French then discovered again and then forgotten and partially destroyed during the war with America. The bomb craters are still evident and luckily the French took pictures during the first discovery and reconstruction efforts so the original design can still be studied. 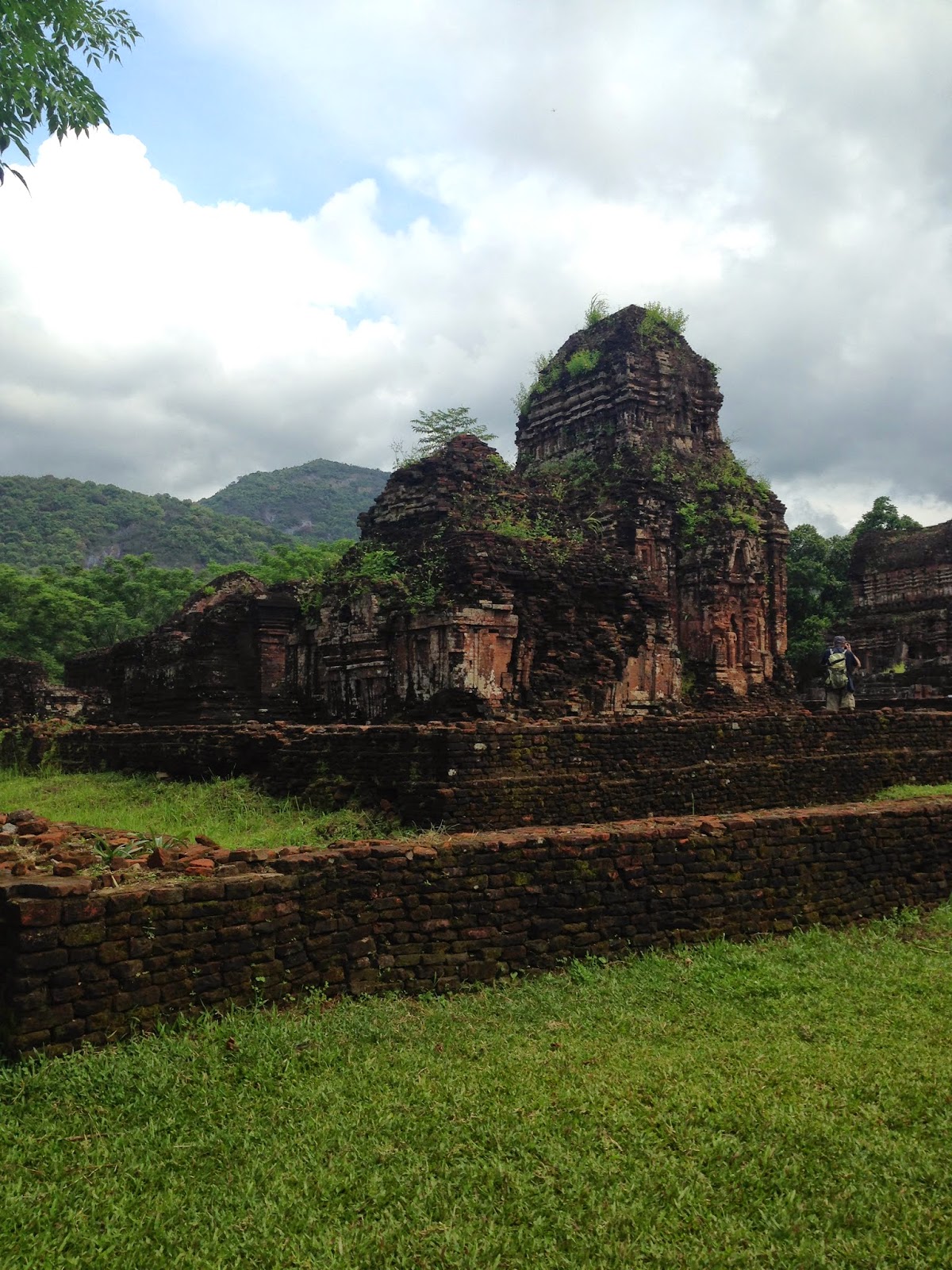 The vegetation has completely taken over some of the ruins 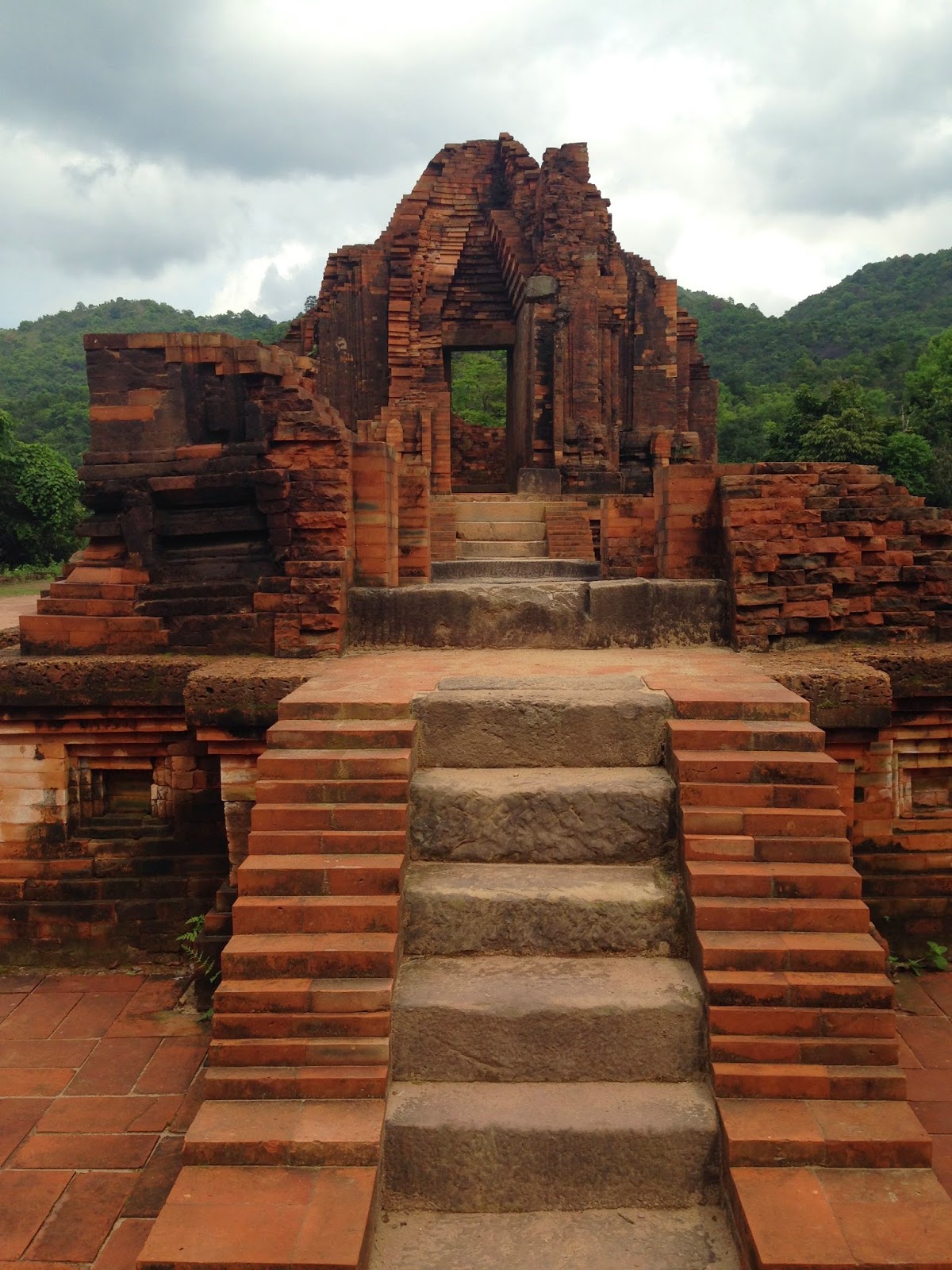 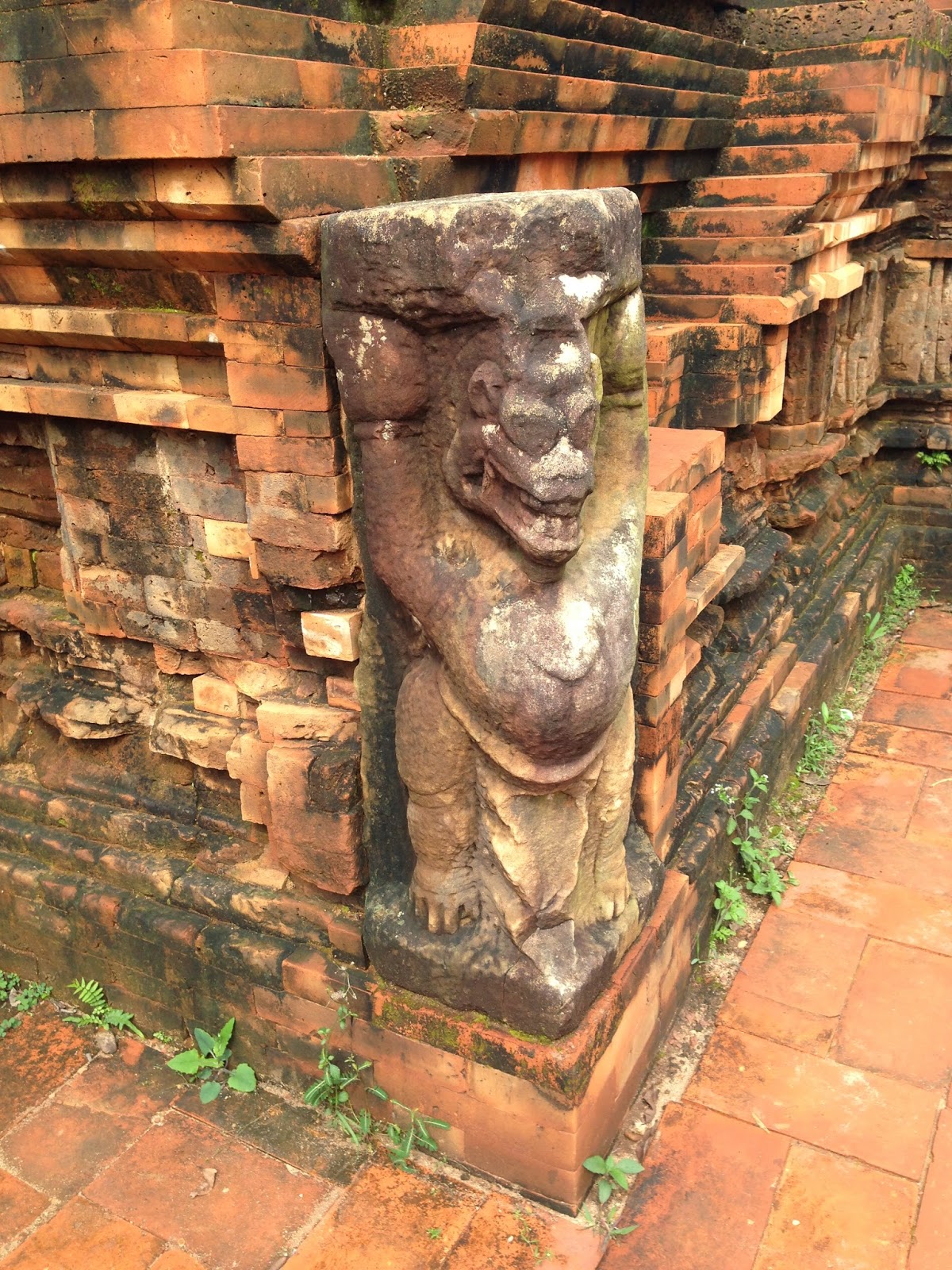 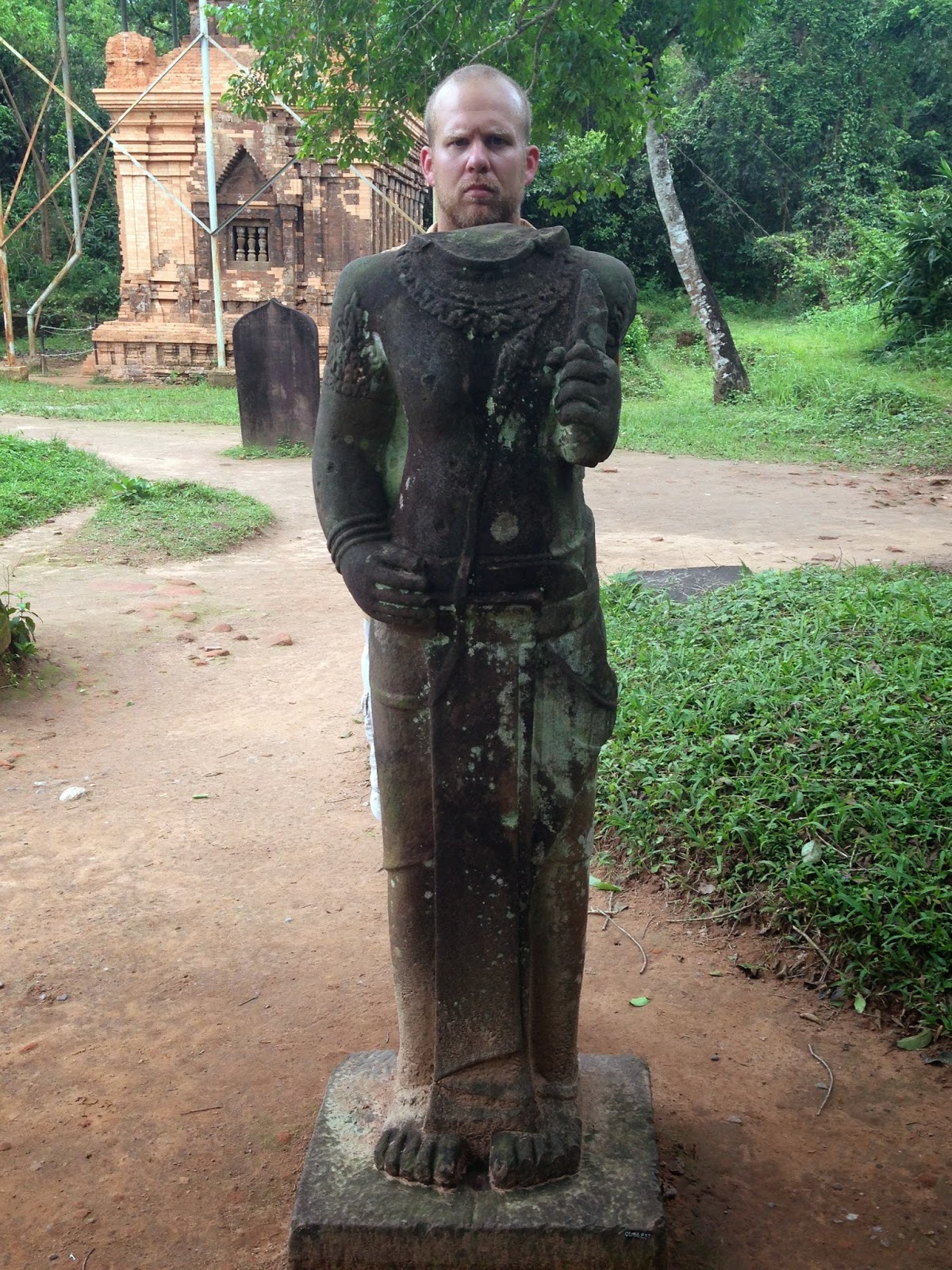 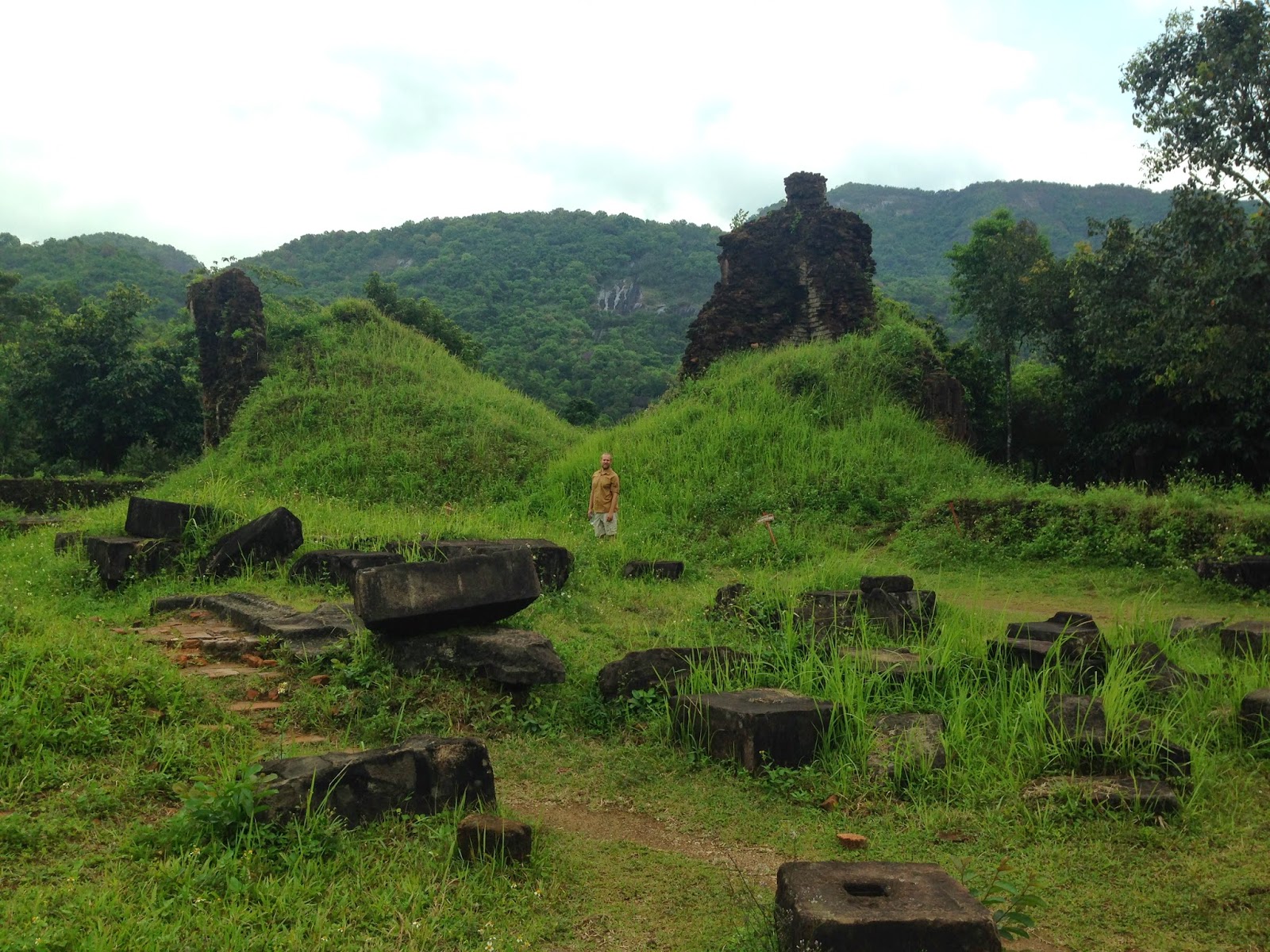 You can see the indentation of a bomb crater


After our Cham adventure we had the next day to spend in Hoi An before hopping on our night train to Nha Trang. We decided to go to visit the Marble Mountains, which are right outside of Da Nang. Da Nang is a city that was used as a base by the Americans during the war, and is where my step-father was stationed. There is nothing left there as far as war memorials go, but the Marble Mountains were reportedly used as a hospital base for the Viet Cong. Inside these mountains are several hidden caves which are Buddhist temples or shrines. The area is peaceful and scenic and still has an active monastery at one of the mountain plateau areas. 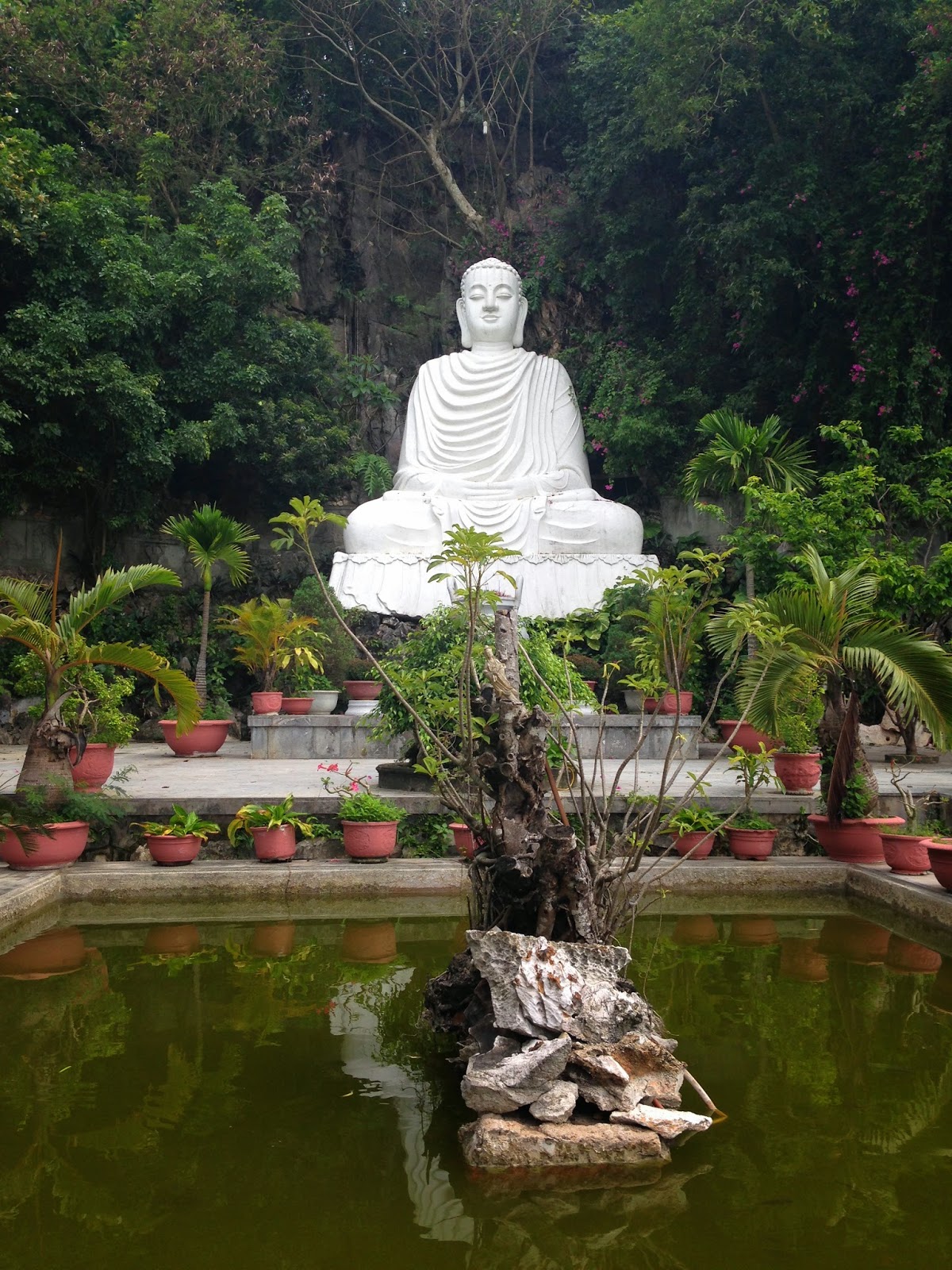 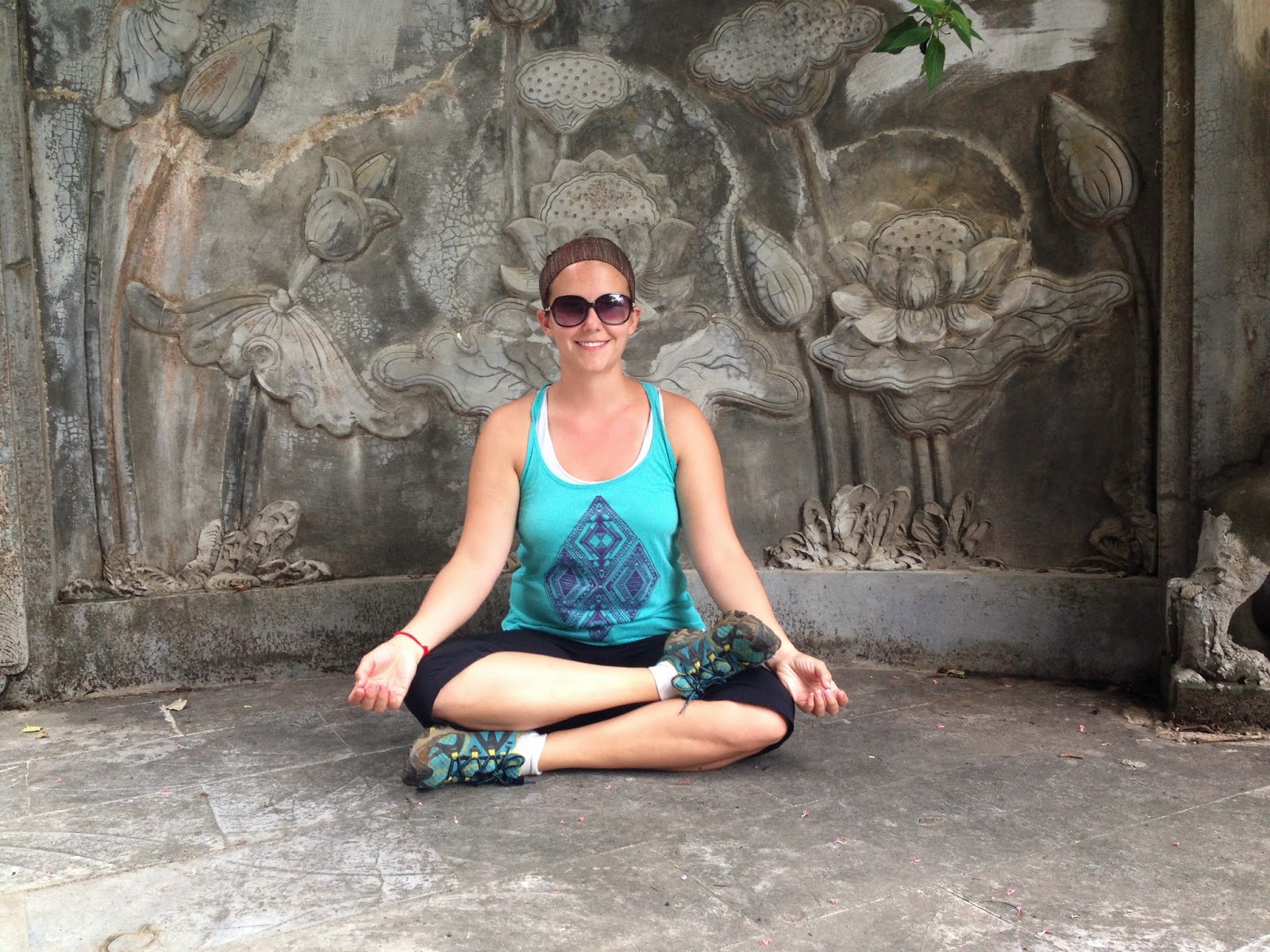 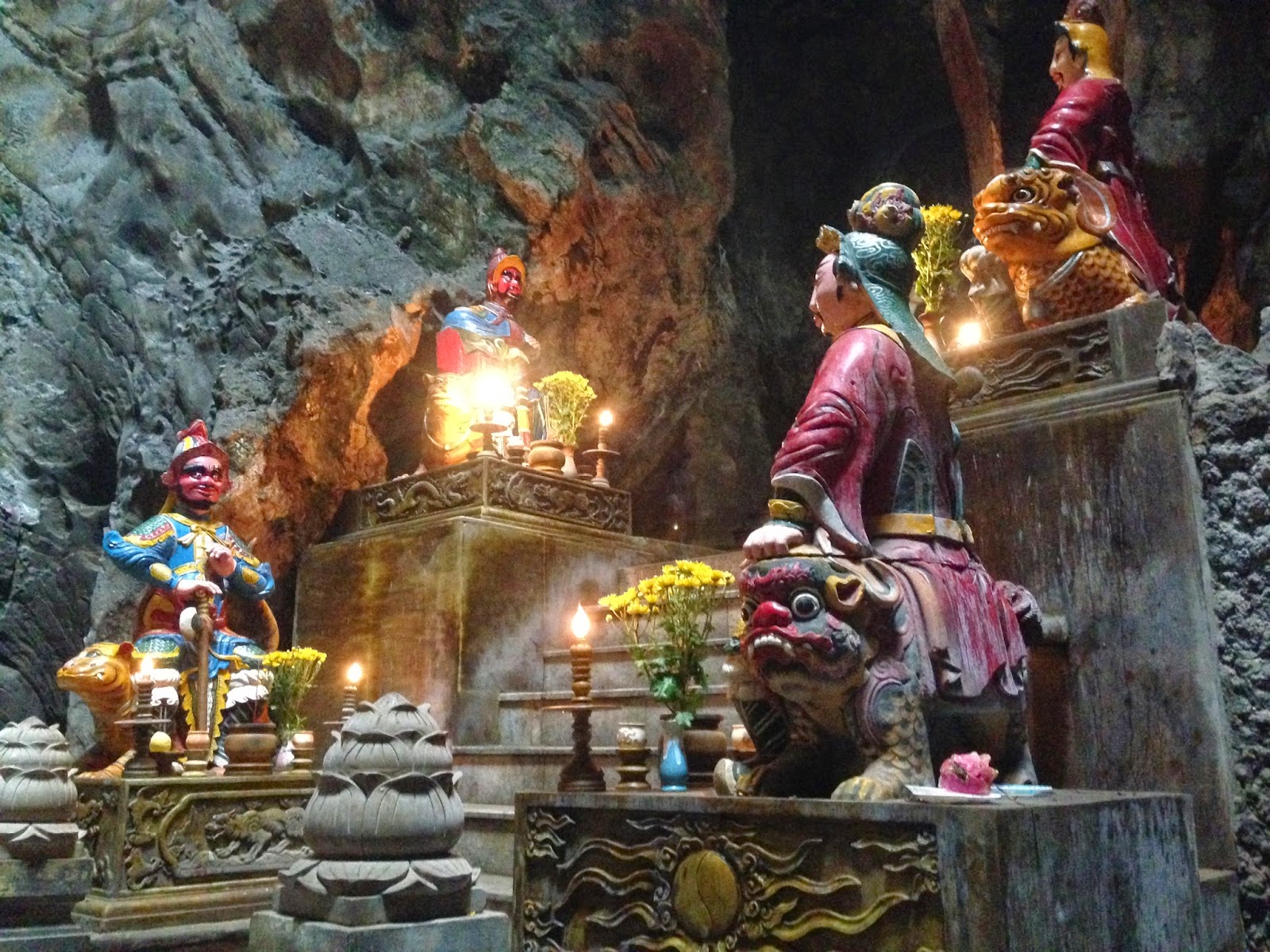 The guardians along the stairs 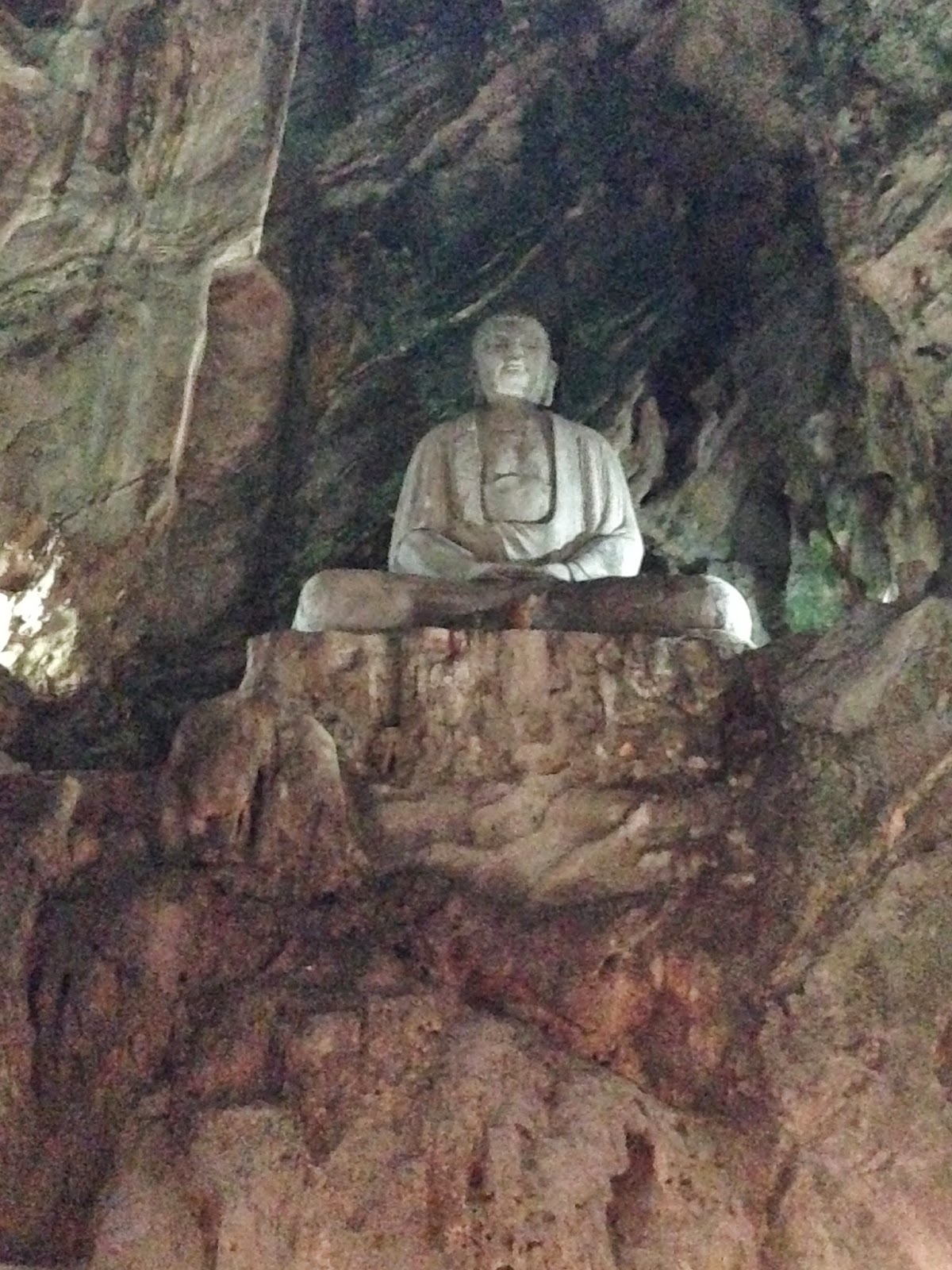 Carved, sitting Buddha in the cave 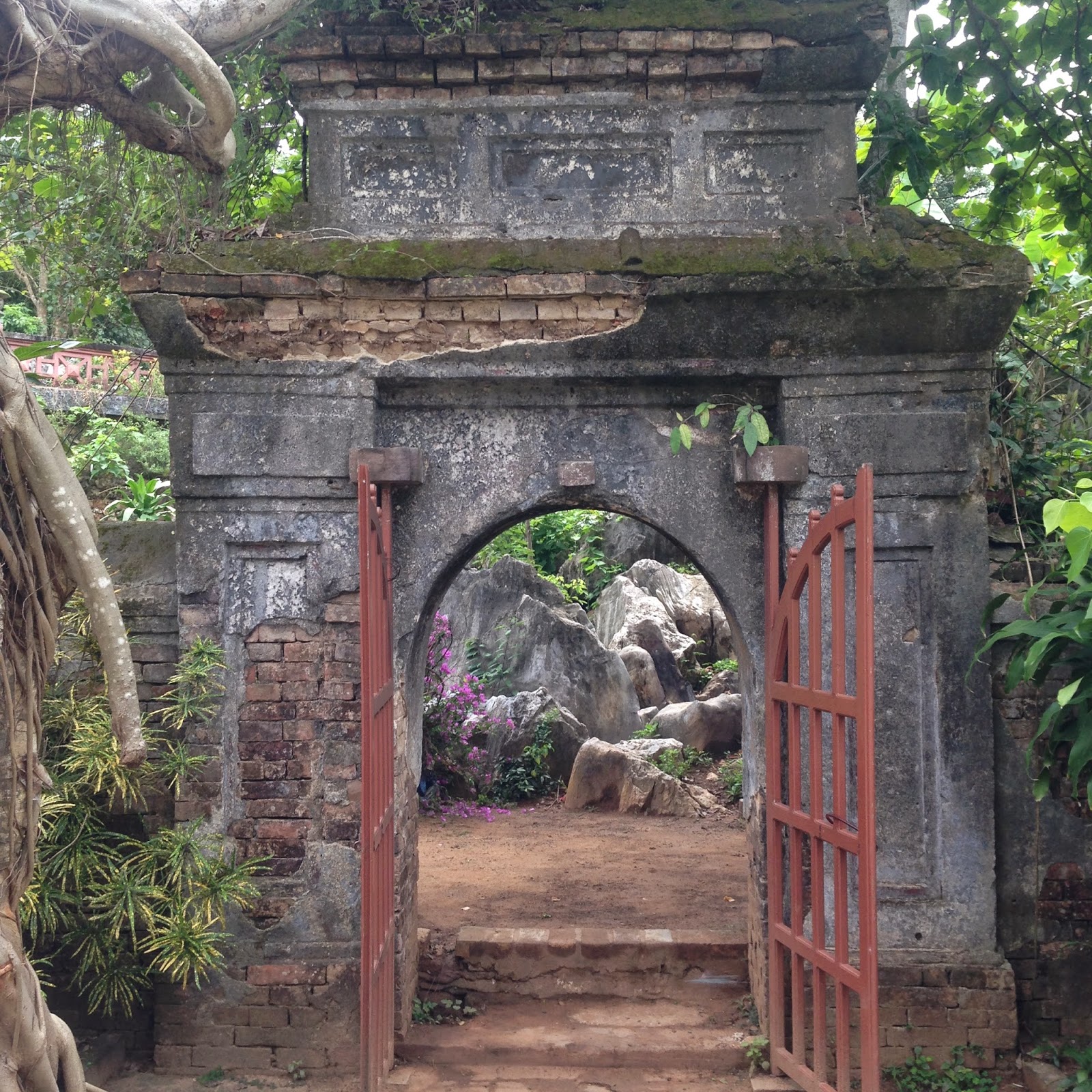 A beautiful, old gate leading to a rock garden


We left Hoi An that night to sleep on a train (again) and woke up in Nha Trang where we then took a bus to our mountain paradise, Da Lat.
Posted by Christy at 3:03 AM