Since we arrived quite late, our first exposure to the old capital of the South was of sketchy looking park patrons and an inordinate amount of inordinately large cockroaches scuttling about. But, we found our hostel and checked in for the night. As we were quite exhausted from the day of hiking and the weird pod bus, we fell asleep quite quickly.


We woke leisurely the next morning and I decided that we should pursue a pedicure to begin the day. This was Jared’s first pedicure and, unfortunately, not nearly as nice as the one I received in Hanoi with the coffee scrub exfoliant. I think he is at least convinced that it could be better if he gives it another shot. Then, after lunch, we went to the Reunification Palace, the former seat of power for South Vietnam. The palace itself is a mansion, combined with the formal political spaces one associates with any head of government such as meeting halls and strategy rooms. This is also the place where the war officially ended. After that, we went to see the the Immaculate Conception Basilica and the Central Post Office, both built by French colonists, and both still functional and beautiful. That night as we walked back to our hostel, a few Vietnamese college students stopped us for a chat in the park. These conversations are always interesting and vary depending on the students’ mastery of English and their interests. My conversation revolved around geography and University in the U.S. Jared’s, on the other hand, ended in a discussion of states' rights, especially in reference to a woman’s rights in a divorce. Who knows where the conversation will take you?! That evening we went to the Saigon Skydeck at the top of the Bitexco Financial  Tower (the tallest building in Vietnam) and had a cocktail and listened to some Vietnamese lounge music, then finished the night with some traditional Vietnamese street food. 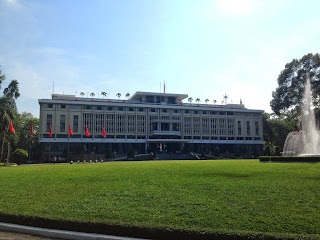 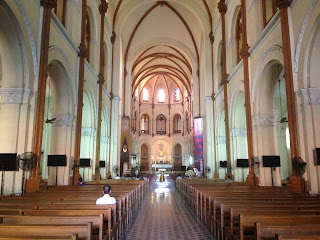 The inside of the Immaculate Conception Cathedral Basilica 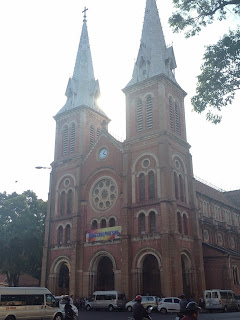 View of the church from in front of the Post Office 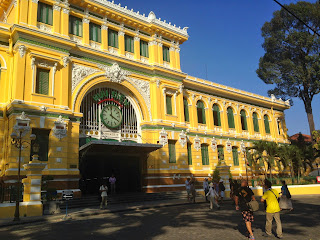 Finished in 1891, the post office is still fully functional


Our last day in Vietnam, we visited two of the Buddhist temples in HCMC, got our last cheap foot massage, had Vietnamese coffee and again enjoyed some traditional food on the street. The first temple we visited was the most active temple we have seen. There were several statues and people everywhere lighting incense and venerating their chosen deity. It was a unique experience and one for which we are thankful. It was enlightening to see the religion in action. 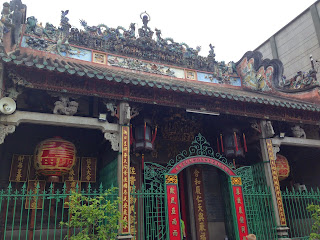 Gate and entrance to the temple 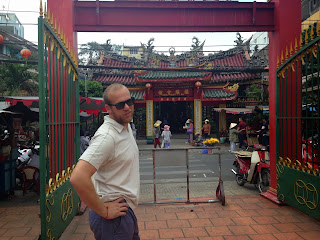 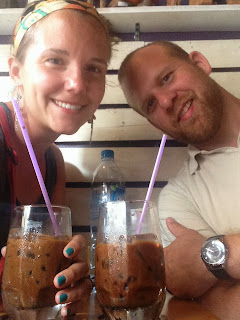 Our last Vietnamese coffee. We started out not caring for the drink and ended up loving it!


The prospect of leaving not just Vietnam but Southeast Asia was bittersweet for me. I was sad to be leaving cheap accommodations, good food and foot massages but was also excited for a new adventure. I was apprehensive and a little scared about what China would be like, but Hong Kong acted as a nice transition.