We spent a week in Hong Kong with the intent of not only applying for (and receiving) our visas for mainland China, but also to have some time to relax and enjoy Western luxuries such as unrestricted access to Facebook and Google. While in Hong Kong, we stayed in three different apartments rented through Airbnb. Each apartment was quite tiny, but had enough of a ‘kitchen’ that we were able to store cold food items and cook some of our own food. Jared made a version of my favorite soup that my grandma Cameron makes, as well as a potato and ham soup. Each was delicious and provided a welcome respite from eating out for every meal. We opted out of a visit to Hong Kong Disney but visited several different attractions in Hong Kong including the island of Macau.

Our first destination gave us a taste of the type of physical activity that waited for us China. We decided to visit the Central Park of Hong Kong, Victoria Peak, and to get there we walked straight up a huge hill. It was probably 30 minutes solid of uphill climb. Thankfully, there was a Starbucks at the top or I don’t think I would have made it back down. Kidding, of course. Well, kidding about the not being able to make it back down, not about the Starbucks. It was a beautiful park and afforded some interesting views of the city. The going down was equally as arduous as the up but instead of Starbucks it was a pitcher of margaritas and guacamole that greeted us. It had been quite a while since our last ‘Mexican’ fix and with an undetermined date of our next fiesta we had to take advantage of the opportunity while we had it. Similarly, while in Hong Kong we enjoyed some Texas style barbeque. Jared gave it his stamp of approval but deemed it lesser quality than Hard 8 but, then again, all barbeque is lesser quality than Hard 8. 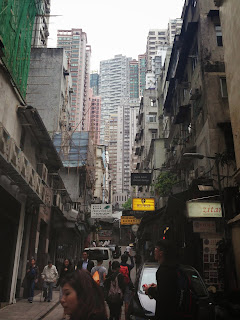 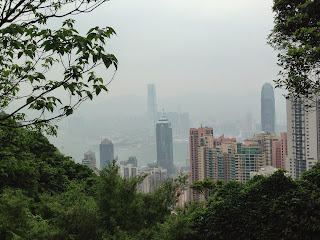 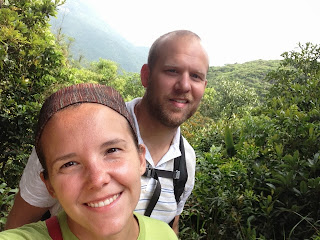 On the path going up or down.


We also visited the Tian Tan Buddha of Hong Kong. This Buddha is situated high on a hill (no climbing, there is a cable car.) next to a monastery. The monks of the monastery decided to build the big Buddha after visiting some different Buddha statues in Thailand and India. The monastery is still active but the area around the Big Buddha has been built up as a tourist attraction. There are gift shops, a video about Buddha, restaurants and, of course, a Starbucks. 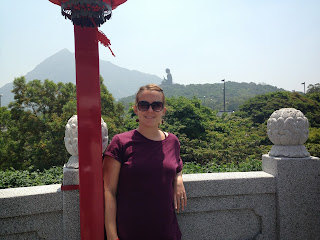 Buddha in the background 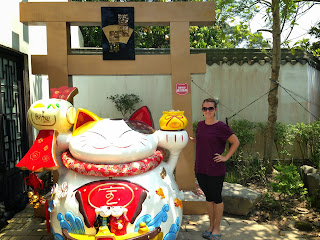 A big lucky cat to go with a big Buddha 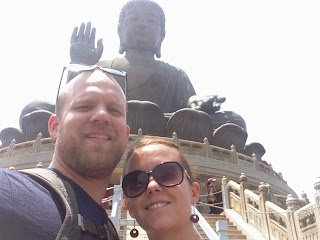 
Also, while in Hong Kong we visited the Buddhist  Chi Lin Nunnery and accompanying Nan Liana Garden. The rain started while we were walking, but luckily we had our umbrella and were able to just walk leisurely through the flowers and ponds. 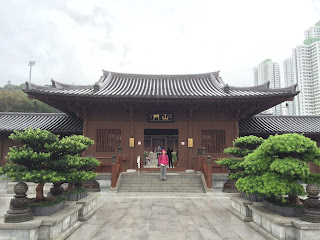 The entrance to the Nunnery 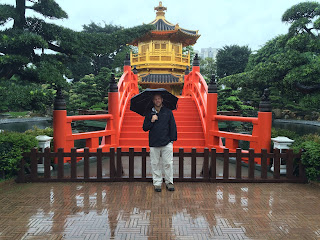 A beautiful red bridge in the garden

I also can't forget to mention dining at Tim Ho Wan. This is the world's cheapest Michelin star restaurant and was so incredibly delicious. We ate these amazing pork buns that are truly indescribable. The dough of the bun was perfectly cooked and slightly sweet and the pork inside was in a sauce that my inexperience prevents me from adequately detailing. 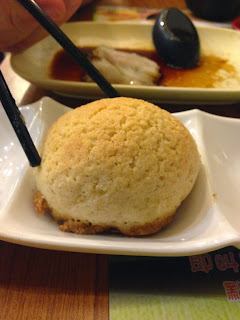 The pork bun.
Our penultimate day we ventured to the island of Macau, an island and city which is part of China but still with "independent" governance (similar to Hong Kong). Gambling, of course, is what Macau is known for. More money goes through Macau than through Vegas. There is also some history on the island and we walked through the old streets to see what is left of the façade of one of the first churches. We didn't win any money but we didn't lose any either and for a few hours we felt a little bit like James Bond. 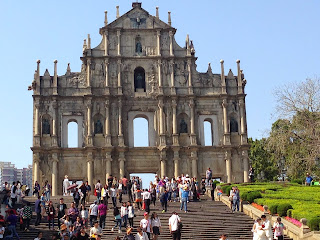 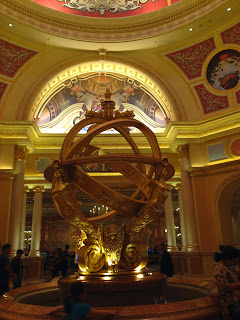 Casino interior decorating at its finest 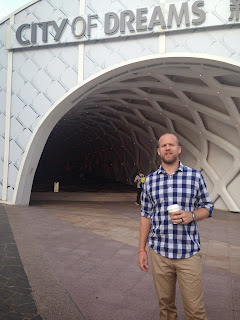 The tunnel to the City of Dreams Casino 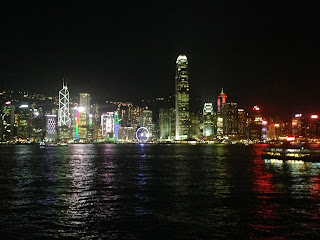 After our ferry back from Macau, we walked the Hong Kong harbor to see this view
The visa process for mainland China is and was arduous, but we had them within a few business days and soon after we left the island and flew to the mainland, on our way to Shanghai!﻿