We spent five days and four nights cruisin’ upstream on the world’s third longest river. The cruise left port from Yichang and ended in Chongqing. Before boarding the ship, we wanted to stock up on some things so we would have non-overpriced snacks and drinks while on board. We had given up hope of finding Western items until, as we were walking to hail a taxi to take us to the ship, I spotted a sign. It was blue and yellow with English letters and a little sun. It was Wal-Mart. Yes, Wal-Mart. We have NEVER been so excited to see a Wal-Mart. Hours could have been spent wandering through the aisles picking out various Western items that we may or may not have needed. Time was not a luxury we had though, so we beelined for the important items (goldfish and Reese's). The ship personnel were incredibly friendly upon our arrival and the cruise director briefed us privately, as we were the only English speaking Westerners without our own personal guide (there was a group of Germans but they had a German speaking tour guide with them). During the cruise, we passed through the famous Three Gorges and had day trips to the Three Gorges Dam, Shenong stream and Fengdu Ghost City.


We disembarked the ship and passed through the souvenir stalls to load onto a minivan with our Western friends, The Germans. It was a short drive up to the tourist area of the dam where we got to see a small scale model, view the dam from a ‘bird’s eye’ and get fairly close to the ship lock portion. Unlike the Hoover Dam, we were not allowed to walk along the top of the dam or see the inner workings of the mechanics. Jared was a little disappointed about not getting to see the world’s largest hydroelectric facility up close and personal, but it was a fun, rain soaked adventure off the boat and the information was interesting especially since our boat would be passing through the ship locks later that evening. 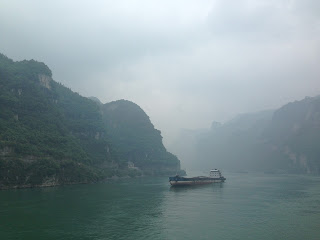 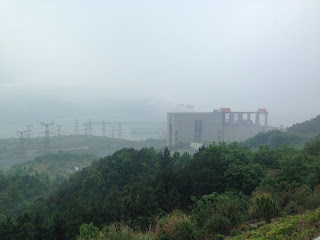 A fuzzy picture but the dam is back there somewhere. In the foreground is a new construction, an elevator for small boats to use instead of the locks.


Throughout the cruise, we were able to witness the impact that the dam had on the surrounding area in China, both upstream and down. In the villages along Shannon stream, people who lived along the banks were displaced following the dam construction, due to the consequential rising of the water. In fact, our tour guide (it is kinda cool being the only English speaking people because we get our own tour guide) was one of the local people whose family had to move when the water rose. She described the event as a gradual process, the water rising a total of 90 meters during three separate occasions. The culture of these local people was completely altered following the construction of the dam. They no longer were able to live as they had on the rocky banks of a meandering stream. As with most government relocations, they were compensated and given the option of moving to higher ground or to the nearby city. The family of our guide chose to move to higher ground, and as she still lived in the area, her knowledge of the stream and the history was presented through the perspective of a true local. She confessed that she preferred the scenery the way it was before the dam but the views we were treated to were quite spectacular as well. One of the unique cultural aspects of the Shennong stream are the hanging coffins. These coffins are strategically placed high in the crevices of the gorge walls and held aloft by crisscrossing wooden poles, or are wedged strategically between the craggy outcroppings. During our ferry we saw three different hanging coffins. It is unclear how the people from long ago got the coffins up to such heights or the exact purpose of the practice. There was also a performance of local dances and songs although the volume was intolerably loud and we had to sneak out the back. 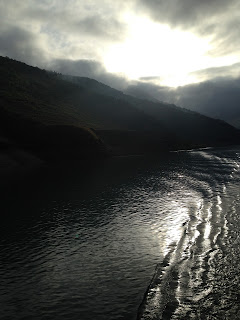 What a site to wake up to 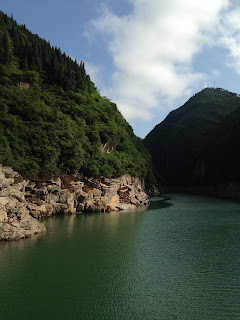 Just around the river bend... 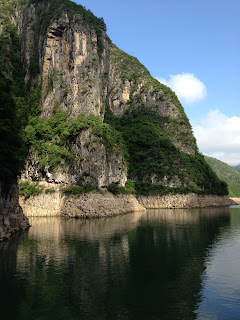 I look once more, just around the river bend! 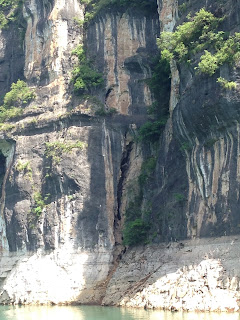 There's a coffin in that crack!


Our good guide luck expired with our Shennong stream lady. For the ghost city tour, we were in a group with the Chinese, our German compatriots off on their own with their own guide. Despite the slower pace, being part of the group was not that bad. However, when our guide forgot to translate the information to English we were completely lost. It is also hard not to be suspicious when the Chinese portion of the description takes 5 mins and the English translation only takes 30 seconds. The site is, according to Chinese legend, the city of the dead, where the evil spirits live. There are three ‘tests’ that are presented to the visitor in order to secure good luck and safe passage through hell. I am guessing we passed all of them since we made it safely back onto the boat. We saw several creepy statues and walked across the good luck marriage bridge so, despite poor translation we had an enjoyable excursion. That night, there was a ‘talent show’ and we watched the crew and some fellow passengers demonstrate their dancing, singing, tai chi-ing and gourd flute playing skills. Trust me, the skills were top notch. Or, at least as top notch as cruise ship skills can be. This night also resulted in several pictures with our fellow Chinese passengers, some solicited and some not. We snagged a pic as well with a couple whom Jared befriended after the husband pet his hairy arm (without first receiving permission). His look of amazement when Jared turned to him was enough to earn his wife a pet too. 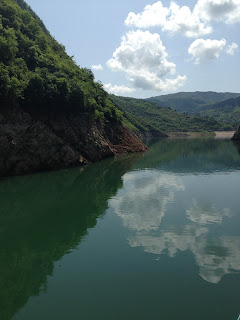 The clouds seemed to be floating along right beside our boat 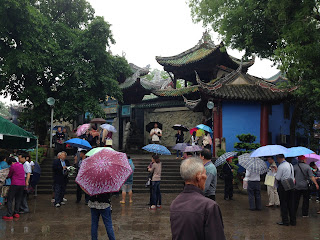 
The cruise ended the next day and our vacation from our vacation was over. We met a guide Jared had contacted online at the dock and went to see the Daezu rock carvings. Before I continue with a description of the experience, I feel as though I should begin with a prologue of sorts. To best understand our perspective I think the following experiences have to be considered as primers for all of our interactions with guides. First, there is India. India made us highly suspicious of all service providers and retailers. Anyone who works with us in either of those capacities is essentially guilty until proven innocent. I realize this is a potentially detrimental perspective but it’s the one with which we are currently operating. Second, we have had really good guides. Despite their uphill battle they have successfully won us over and have proven that we, in fact, do not have insurmountable expectations. These two facts along with a highly scrutinized budget resulted in a disappointing day at the rock carvings. Don’t get me wrong, the carvings are spectacular, as the pictures show, but the “guide” was by far the worst one we have had. The experience fell short from the beginning when we arrived at the first location and Jared and I waited expectantly for the explanations and descriptions to start. They never did. We had to ask questions and hope that the answers were accurate and in proper enough English that we could understand (the 18th century was not 1000 years ago). Then, already feeling a little deflated about the first site, it was time for lunch. We requested something cheap like a cup of noodles or something along those lines, on the spot indecision led to us being persuaded by his suggestion to go to a restaurant where a meal would cost only 150 RMB for 4 people (about $25). I thought it was odd that he gave us the price estimate for four people but assumed that since Chinese meals are all shared that he was referring to the overall bill and that we would then split the bill between us, him and the driver. Looking over the menu, which is all in Chinese, he helps us find some dishes- we ordered two vegetables and a pork dish- and then he made some more suggestions and I told him that I think we had plenty for the two of us. He responded with, “But, I don’t think that is enough food for four people.” To which I said, “Oh, well, I mean, we will share ours but you all can order whatever you want.” Which inevitably led to an angry Christy saying “We are splitting the bill four ways, right? Or are you expecting us to pay for your meals?” He was. Apparently, according to him, it is customary for the customer to buy the guide’s and the driver’s meals. Seriously? We have been traveling for four months and this has NEVER happened to us. Even if that is true, to just assume that we are paying without us offering is highly offensive to this Western woman. For the sake of comfort, I apologized later and we paid for the meal. With this very forced restart of our attitudes we were going to try and make the best of the rest of the day. However, after arriving to the second and most well-known site of rock carvings, he walked us to the gate and then said he would meet us at the exit. He didn’t even walk with us through the carvings. Absolutely absurd. This was perhaps our greatest waste of money to date and there was little we could do about it. Since being removed from the situation for a while, we believe that the whole incident stemmed from a difference in our definitions of guide. He thought he was being a guide by occasionally translating and helping us read a menu. We had been traveling independently in China for almost three weeks at that point and had developed a fairly effective mode of communication, we didn’t need a translator, we needed a guide with detailed, historically relevant information. End rant.

The rock carvings were actually quite impressive, even without knowing anything about them. The patience and attention to detail necessary to achieve what we saw is nothing short of amazing. 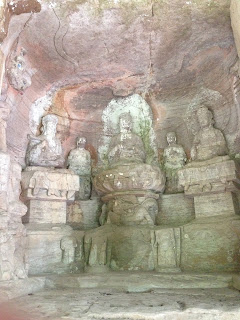 Several statues carved into the curves of a cave 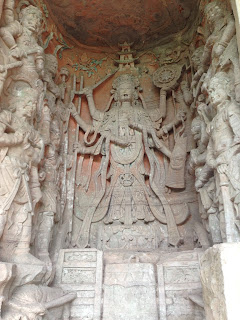 The skill required is unimaginable 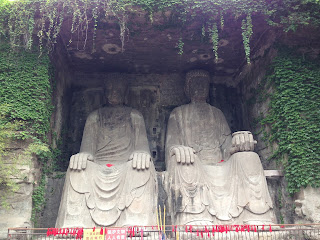 Two huge Buddhas carved into the side of a hill 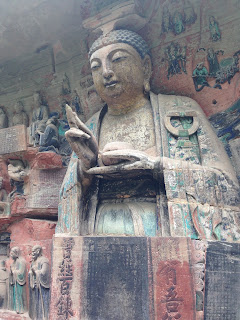 The color on these statues is original 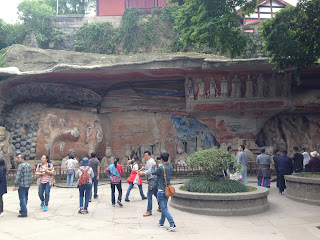 A sleeping Buddha carved under an outcropping 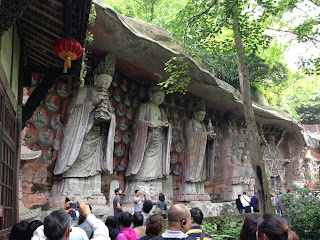 The size of the sculptures is consistently 'larger than life'
Our train that evening took us to Chengdu, the city for pandas!﻿
Posted by Christy at 1:53 PM