The day after sleeping on a train it always feels like you have a bit of a hangover, and it's near impossible to not feel drowsy for most of the day. However, we pushed through and made it to the old city wall to bicycle around the ramparts for a couple hours. It was a fun way to see the city skyline and learn some of the history of Xi’an. That night we went to Muslim Street, an area with an abundance of street food vendors and fare not commonly available in other areas of China. However, the spices were quite typical of China, more specifically the Sichuan area of China. I was awake at 3:30 that morning with heartburn. Luckily, I still had some heartburn medicine leftover from India and was able to take some and get some rest that night. I needed to feel refreshed because the next day we were going to see the Terracota Army. 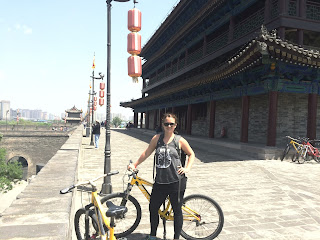 I am an awesome bicyclist 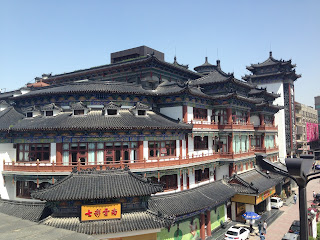 A view from the city walls 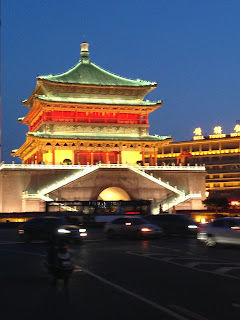 The main bell tower lit up at night 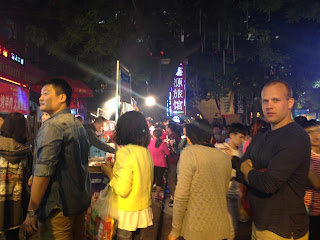 Muslim street food is serious business.
The Terracota Army is one of the sites that I have been looking forward to since we decided to take our trip. It is supposed to be one of the great wonders of the world, and seeing it in person only reaffirms that. The complex was designed and built under the direction of the first emperor of unified China. The first emperor of the Qing dynasty, he also began construction of the Great Wall and is historically regarded as one of the most influential emperors of China. Our visit began by a quick trip to the manmade mountain that houses the emperor’s actual tomb. There are rumors and beliefs that this tomb is booby trapped and surround by a river of liquid mercury. It is actually one relic that is known but has NOT been excavated. To this day, no one has entered the tomb. According to our guide, there are plans to begin excavation but nothing concrete. Between this mountain tomb and the pits where the warriors were discovered is about 1.2 kilometers of empty field. Since it's believed that the emperor would not have left the space between the known army and his tomb empty (since the purpose of the army is to protect him in the afterlife), it's assumed there are either more warriors or something else within this gap, and exploratory excavations are currently being conducted.

There are 3 pits at the warrior site, each with a different type of soldier to fulfill a different purpose. Pit number one is the largest pit with an estimated 6,000 terracotta figures. Pit number two has different cavalry and infantry units and is the pit where the only intact warrior has been found. The final pit is where the command post is located. Each soldier has a different face. It is believed that the workers who participated in the construction of the soldiers modelled the faces after one another. This is a particularly potent fact, since each worker was killed after completing his work in an effort to ensure the burial complex remain a secret. I thoroughly enjoyed our visit and this will forever be one of those places that is just unbelievable in scale and story. We met a fellow American and a couple from the UK on our tour and we enjoyed some beers and conversation with them that evening. 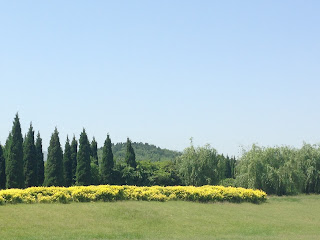 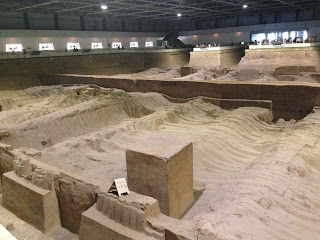 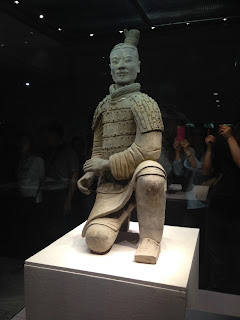 The kneeling archer- the only intact warrior to be discovered. 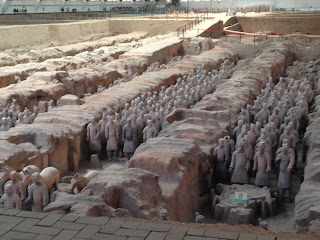 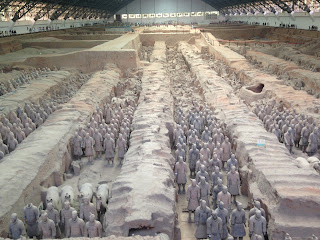 Just, wow- the infantry of Pit one

We took it easy the next day and had a date at the movies. Not even being in China could keep Jared from seeing the Avengers 2. We found a 3D theater and although I was quite disappointed there was only caramel popcorn, we had a nice time. After that, I went to get a haircut and came out of the salon a blonde. 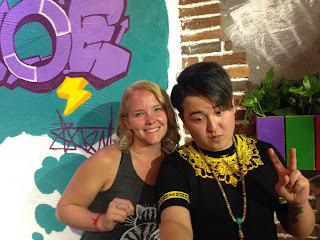 We took lots of pictures. That is me and the guy responsible for my new hair.

I suppose when I don’t have a job for a solid 10 months, it is a good time to play around with my hair. The next day we had a quick morning train, climbed a mountain and then took another train to get to our next city.
Posted by Christy at 2:38 PM