We were going to take a train from Hong Kong to Shanghai but instead, we flew! It was cheaper and a whole lot shorter transit. Our hostel was right near the Bund, a riverside area in the heart of Shanghai. It was a great location and made getting around the city and seeing the sites much easier. We were pretty rushed here and logged more miles walking than we had in awhile. The view of the city at night from the Bund is pretty spectacular. Our first night, we walked down along the water’s edge and then wandered around until we found a restaurant that looked like it at least had pictures on the menu so we could try to order something recognizable. We got lucky and picked a place that was actually quite delicious. We were sat at the same table as a girl from Hong Kong who spoke English quite well. In Asia (perhaps in big cities in the US as well?), it is common to sit at the same table as another group of people. She and her Shanghai friend helped us order, and introduced us to what would become our favorite food in China- the Shanghai dumpling. This little dumpling fellow is a traditional dumpling filled with broth and a tender bite of pork. You pour a bit of vinegar on it and eat it cautiously since the broth can be scalding hot, but it is a mouthful of amazing. 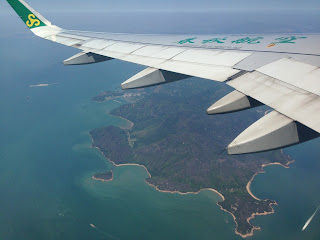 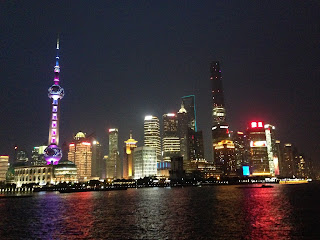 View across the water from the Bund 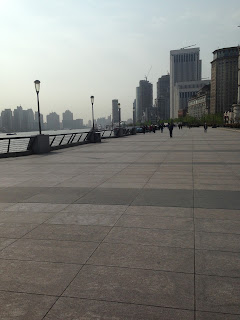 The Bund during the day


The next morning I went for a run on the Bund and saw the river in the light of day. It was nice to be in the city before the rush of people swarmed the streets. Then, based on the recommendation of the girls we had met the night before, we went to a quaint shopping area with little shops tucked inside buildings that looked like old houses. After meandering through the streets for awhile, we rushed back to the hostel to change clothes and then headed downtown to see an acrobat show. No pictures were allowed but the acts were similar to those you might see in a Cirque de Soleil performance. It was an impressive act, and Jared and I are now of the age that watching those feats of flexibility makes our muscles ache with the thought of our own bodies mimicking the postures.
Our last day in Shanghai we visited three different temples and the Yuyuan Gardens. It was a busy, busy day and even though we took the metro everywhere, having to walk between lines during transfers and walking from the stop to the destination really made the miles add up. 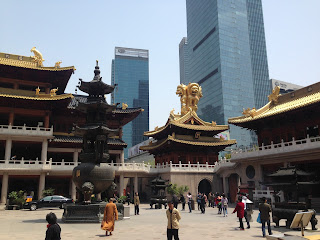 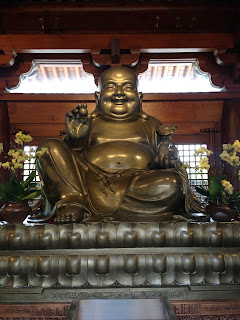 This is Maitreya Buddha, more commonly known as the happy Buddha 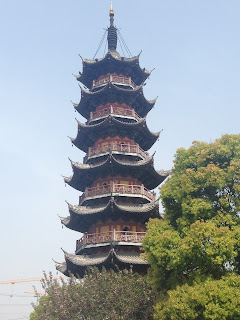 \
The oldest pagoda in Shanghai, it's still standin' tall 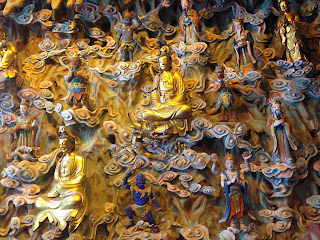 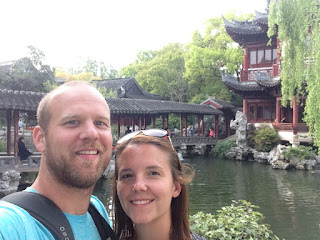 In the Yuyuan Gardens 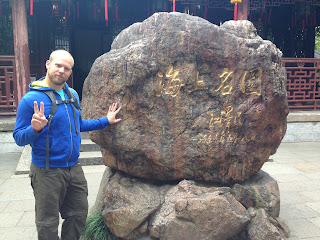 Jared blends right in with the Chinese tourists
We were exhausted but were up early for another couple of marathon days: first stop was Suzhou and there is a lovely guest writer for that post ;).
Posted by Christy at 9:42 AM