Hua Shan is one of the Great Mountains and is considered the Most Precipitous Mountain in China. Or, the moniker Jared prefers, the ‘most dangerous’ mountain in China. However, it is still a tourist mountain in China and some of the hiking paths were paved and rails/chains were provided when the incline was especially "precipitous." It was a gorgeous hike and incredibly rewarding. I am convinced that the feeling of accomplishment after climbing a particularly arduous incline amplifies the beauty of the scenery from the top. Each mountain in China has been so different and so beautiful in its own way. It would have been easy to say, “Oh, we climbed one mountain and it was a hard climb and had great views, we don’t need to see another.” I am really glad we didn’t. I love being outside and hiking and each mountain has more than been worth it and has afforded us a welcome break from the pollution and hustle and bustle of Chinese cities. Enjoy these pictures of and from China’s most precipitous mountain: 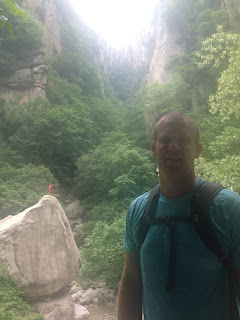 Sunlight through the fog 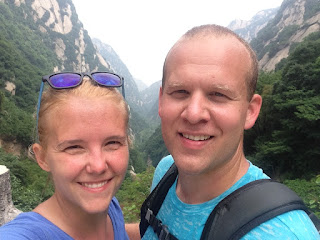 This is just part of the way up 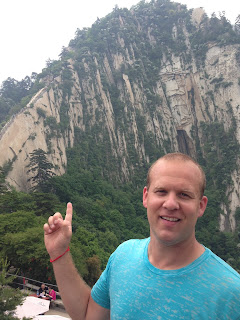 Still quite a ways to the top! 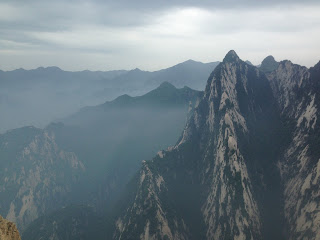 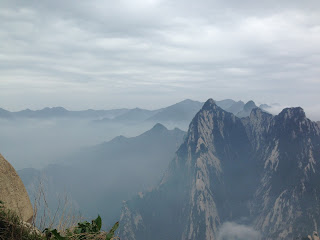 I loved the clouds hanging out just below the peaks 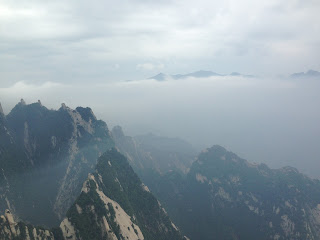 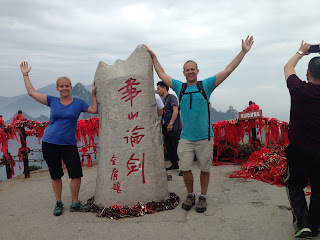 We made it to the top!


After we finished hiking, for the sake of time, we took the cable car down the mountain. We then had to take a bus to the main entrance to the mountain, and then we took another (public and free) bus to the train station. We ate dinner, retrieved our ‘left luggage’ and changed clothes so we wouldn’t stink on the train to Luoyang.


Once we arrived in Luoyang it was another public bus to switch to yet another public bus to finally arrive at our hostel. We were pooped and tired of buses and went straight to bed. When we woke, neither of us was as sore as we thought we would be. Perhaps we are getting used to going up a ridiculous number of stairs? The plan for the day was to visit the Longmen rock carvings. Yes, these were more Buddhist carvings in rock and yes, they were still different and impressive. The depicted representation and aspect of the Buddha differs based on region. These rock carvings were oriented more towards ancient boddhisatvas and traditional Buddhist beliefs. Where the ones in Dazu were painted, these either were never painted or their paint had completely faded. Also, across the river from these carvings is a Buddhist temple and summer house of a former emperor. Lazily, we walked around and admired the scenery before returning to the hostel. The evening consisted of a short adventure to a local mall and out for dinner (I found Indian food!!!). 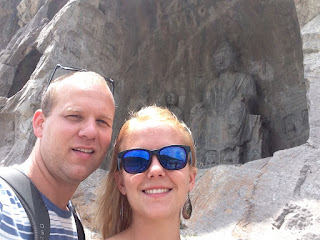 So many niches with so many impressive sculptures 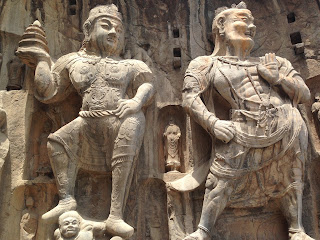 These are ancient guardians and they were HUGE!


The second day in Luoyang, a Saturday, we spent the whole day at the hostel “relaxing” aka trying to figure out what the heck we are going to do in Europe. That evening there was a barbeque on the rooftop terrace of our hostel and we had the opportunity to meet some fellow travelers and we had a nice evening conversing and eating.


On Sunday, the Shaolin Temple was on the books. This temple is nestled in a forest and while it is a popular tourist destination, the transport to and from is not very convenient. We had to take a public bus to get there and the journey, which should have taken 1.5 hours lasted closer to three. There was a traffic jam in a construction zone and Jared had gotten out of the bus to walk ahead to see what the hold up was. While he was gone, the bus started going, and I started freaking out. Luckily, we were able to text and the bus driver stopped when I found him on the side of the road but my pulse was elevated for a steady 30 minutes after. Our bus journey was more exhausting than it should have been and our overall disposition was quite ‘blah’ by the time we arrived to the Shaolin complex. Our first stop was the Kung Fu demonstration. I think it was when the student popped a balloon with a needle THROUGH a piece of glass that we ‘popped’ out of our blah. The Shaolin temple is considered the birthplace of Shaolin Kung Fu and Zen Buddhism. The former was conceived when the monk, Bodhidarma arrived from India and, being denied entrance to the temple, went to a nearby cave and meditated for nine years. During that time, he devised a set of exercises to help him stay in shape. When he was finally allowed into the temple, those exercises were combined with the martial arts that were currently in practice and Kung Fu was born! This particular type of Kung Fu has since been ‘outlawed’ as it is believed that it is too powerful. The toned down version is called Wu Shu and the Shaolin Temple has a large, international school devoted to the teaching of this type of martial arts. Due to our admittedly late start and unexpectedly long bus ride, we did not have as much time as we would have liked to explore the area but it was a pleasantly passed day. 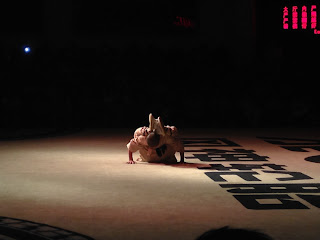 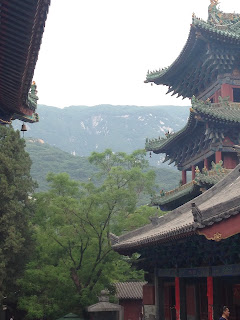 The pagodas with a view of the mountains 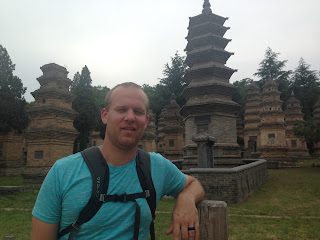 
The next morning we took our last high speed China train to our last Asia destination. Beijing is next!
Posted by Christy at 2:48 PM