We left Shanghai early the next morning to head towards Suzhou. We thought we’d left too late to make our train (especially because the Chinese train stations are notorious, like the rest of China, for most everything being in only Chinese characters), so for the umpteenth (and not last) time on our trip, we hurried, luggage and all, through the metro system and to the train station. We essentially arrived as they started boarding, so while we probably had a few minutes to spare, our efforts were not entirely fruitless. Our chariot awaited us: 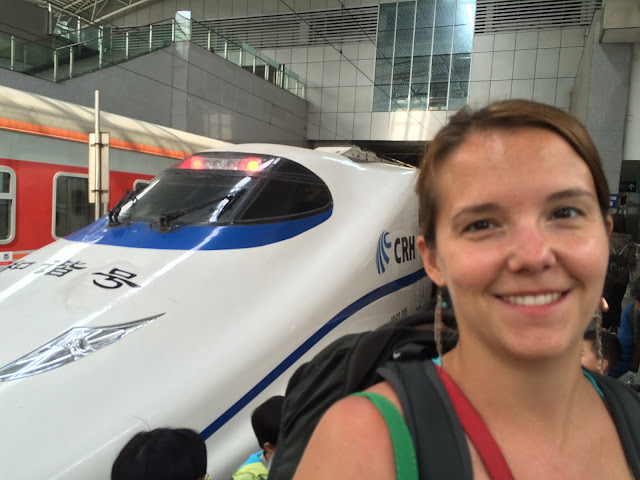 We’d already taken a high speed Maglev train from the Shanghai airport to downtown Shanghai, but that was just a short ride. This was an actual trip, aaaand it was awesome. Fast, comfortable, clean, and, unlike the rest of China, the No Smoking signs are actually followed (or rather enforced). A near two hour drive was reduced down to 45 minutes of playing on your phone, or whatever else you’d rather do than drive. It was about $10 each, too.
Suzhou’s main selling point is its group of Classical Gardens, the first of which was built around 1000 years ago. They are considered to be the standard for a “Chinese garden.” After we checked into our hostel, we started our day by strolling through the Shan Tang, a singular city canal right by our hostel, and then headed for one of the lesser known (and less busy) gardens. On our way there, we decided to grab some lunch. We bypassed the restaurant where the hostess just pointed to a picture of a goose when we asked for a menu, and settled on a place with some standard Chinese fare.
In Asia (and especially in China), you can occasionally use a credit card, but more often than not cash is king, so ATM trips are necessary. Those trips are usually dictated by a fine balance between availability, fees, and ”how much cash do we have right now?”. The latter was the issue, so with no Citibank ATM nearby, we headed to the Bank of China ATM. Why am I discussing a usually mundane ATM trip? Well, my lovely wife conducted the withdrawal procedure, and to both of our surprise, there was an option of 10,000 RMB (or yuan, the Chinese currency measurement). The details of what happened next are still hazy, but while my wife maintains she only pointed at the 10,000 RMB option, the proof is in the pudding, or in this case, the stack of 100 100RMB bills that came out of the machine. For those of you who wish to do the math, 6 RMB = 1 USD.* Whoops.** 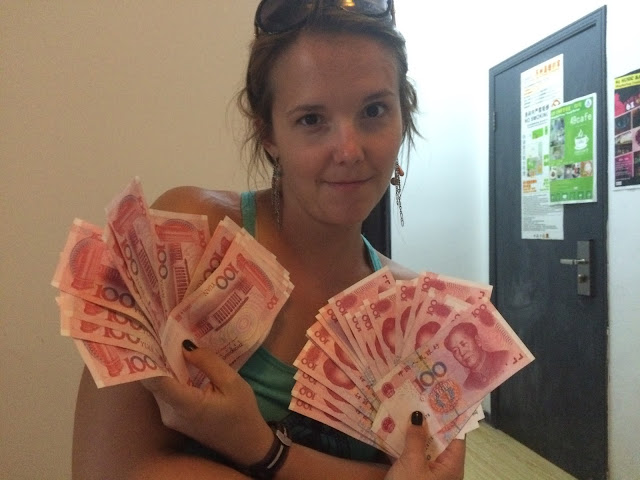 "All About the Maos" just doesn't have the same ring to it.
*Also, this was weeks ago and we do not carry anything near this much around.
**Also also, my wife has gracefully dealt with my countless goofs on this trip, so I should be cutting her some slack, but... maybe not this time.
We secured our loot and continued on to Panmen Scenic Area and the encompassing  garden. The crowd was rather sparse, so it was a pretty nice visit, even though the general landscape of the garden wasn’t as impressive as others we’ve seen. We lost an entrance ticket for the pagoda part, so Christy volunteered to not climb it. 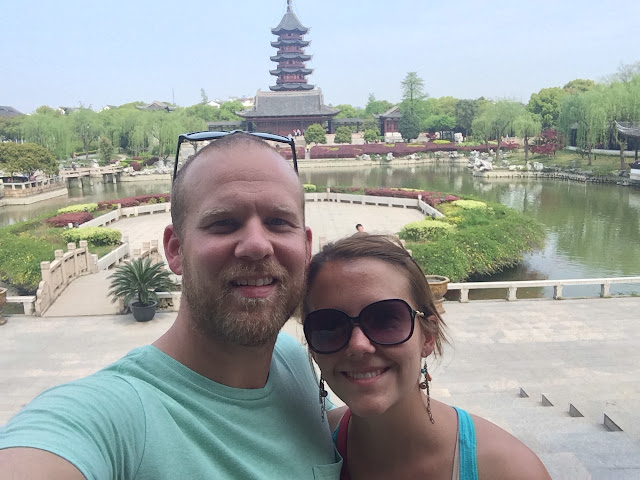 Panmen Scenic Area with Ruigang Pagoda in the background 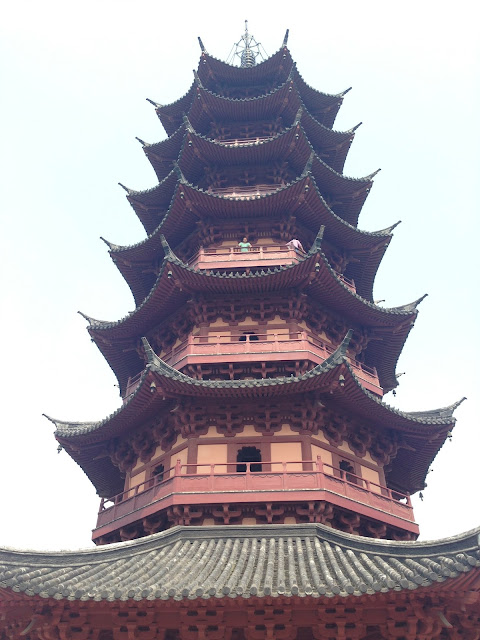 The little green speck in the middle is yours truly.
The day had begun to get away from us. I had planned it rather poorly (see what I mean about my mistakes?), so we really only had time for one other garden. We went straight to the “main” garden, the Humble Administrator’s Garden. It was incredibly busy, but still quite scenic. A weekday visit would probably lend more credit to the serenity of the garden, but it was easy to see the potential for the place to offer a quiet spot for those seeking one. 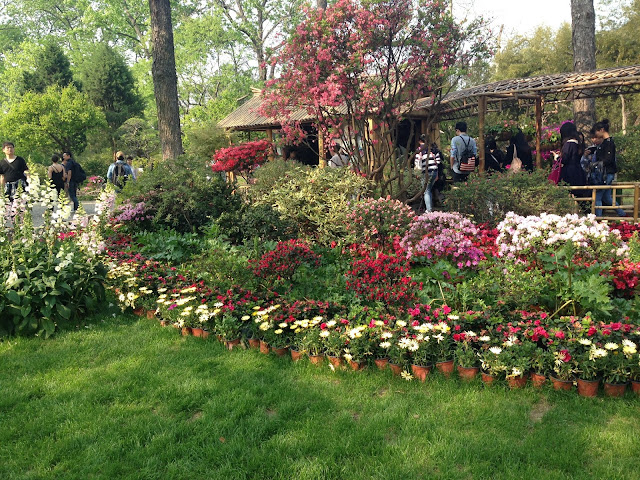 They had planters in a few places. Cheaters. 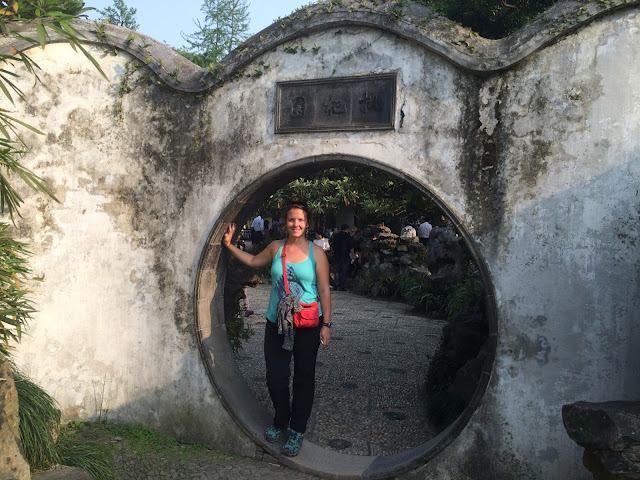 Moon Gates were a common feature. 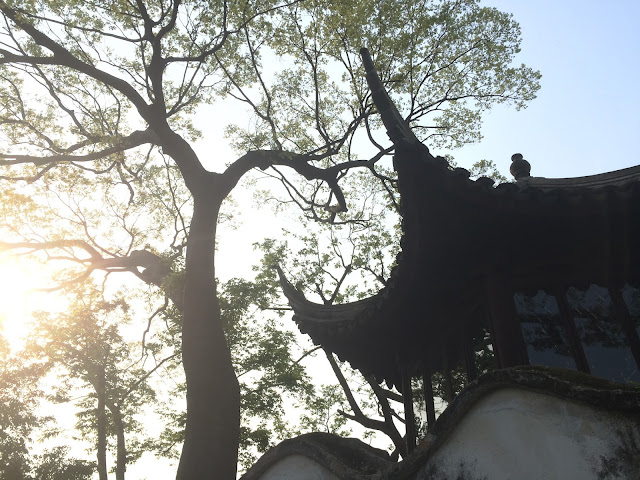 If you didn't want a person in your photo, you pretty much had to point the lens up.
We ended our evening back where we started on the Shan Tang canal. It seems that any city that has canals labels itself as “The Venice of the [blank]”. Since Suzhou has a few canals lining its inner city, it fills that blank with “East,” and while it’s not an accurate label, the canal we were on still provided a picturesque background for an evening meal. We ordered in Spanish (because apparently our Chinese waiter was more comfortable with Spanish than English…which we’ll take any time over no English), and found out during our meal that the picture taking of The Westerners would be happening more often than it did in India (Christy contests this point). When you visit a big city like Shanghai, most of the citizens don’t look at you oddly because they see Westerners all the time. But when you go somewhere specifically “touristy” in China, you cross paths with Chinese domestic tourists who do not live in a city like Shanghai, and really have no idea what to do when they see you other than hesitantly say hello and snap a photo. Sometimes it’s with your permission, and sometimes it’s not, but either way it’s all in good fun and completely harmless. 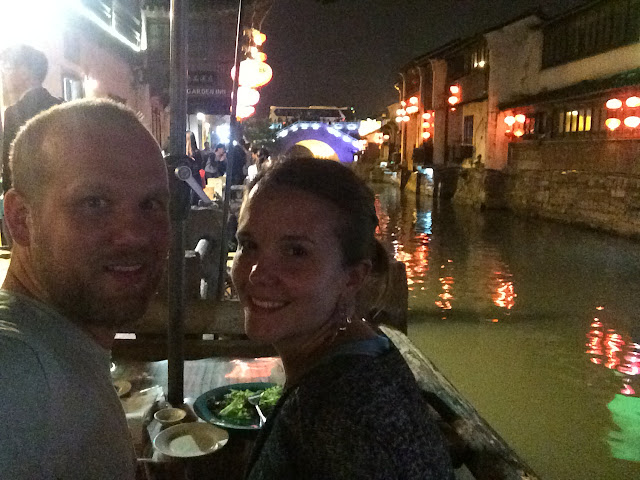 The next day we really tested out the high speed trains, leaving Suzhou early for a day trip to Nanjing, then leaving Nanjing that night for Hangzhou. Not to belabor the point, but that was about 3 hours total on the trains for what would’ve been a 7.5 hour drive, all for $25 each. Nanjing was an Imperial capital for six different dynasties, and today remains an important cultural and economic city in China. Our first stop of the day was to Zijin Shan, or “Purple Mountain,” named for the alleged color of the clouds that often surround its peak. There were a few sites here, but the two we had time for were the tomb of Dr. Sun Yat Sen and the tomb of the Hongwu Emperor of the Ming Dynasty. Sun Yat Sen is usually regarded as the father of modern-day China, not Chairman Mao (as many, including myself, might have presumed). While he didn’t usher in Communism, he was very instrumental in the downfall of Imperial China, and is widely regarded in China and Taiwan.


The tomb was quite busy, and the hundreds of steps leading up were more of a challenge than we had  expected for the day. Also, the clouds (which were NOT purple) were out in full, and served to only hide the steps further ahead. You would arrive at the top of one set of stairs, thinking you’d made it, only to find the clouds had parted enough to let you know that you, in fact, were not done. We made it to the top and shuffled through the mausoleum with the rest of the crowd, then navigated our way to the Ming tomb. 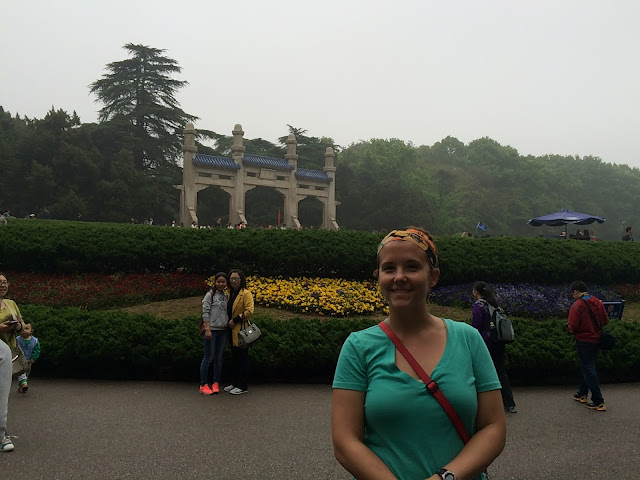 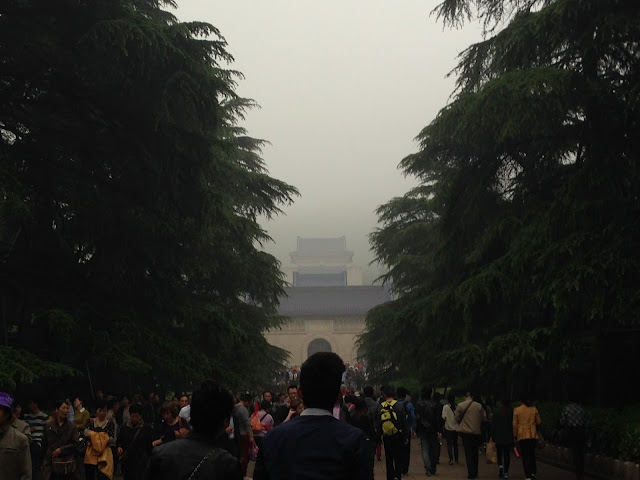 That last visible gate isn't even the next-to-last one.﻿ 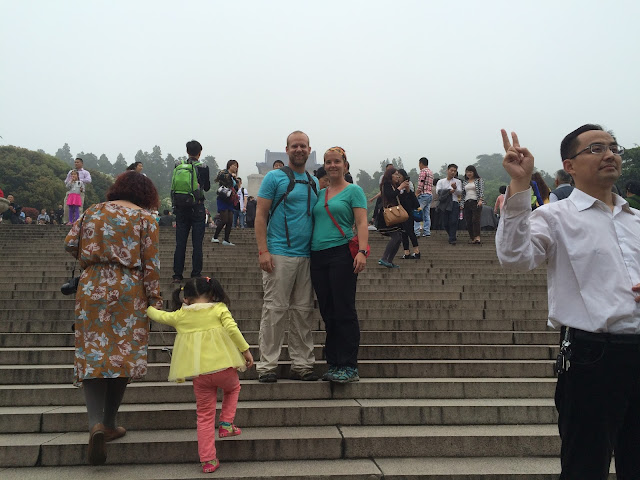 If we have a photo that represents what it's like to travel in China, this is it.
The Ming tomb had been fully restored and was much calmer (read: less crowded) than the other mausoleum. 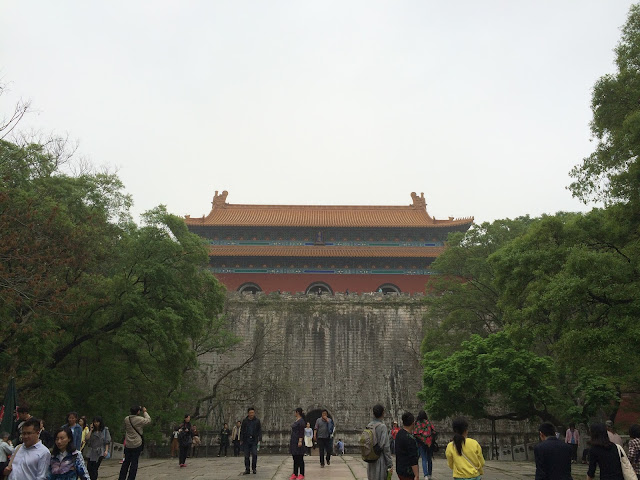 Construction of the Ming Xiaoling Mausoleum began in 1381.
We moved on to the Nanjing Memorial Museum. The site is a memorial to the victims of the Nanjing Massacre, during which up to 300,000 were killed in Nanjing at the hands of the occupying Japanese in WWII. The museum was well done, though repetitive in some areas. And while the rhetoric wasn’t nearly as strong as what we saw in Vietnam (in regards to the Vietnam War), there were some photos and descriptions that were presented with little objectivity. There is certainly still a level of animus towards the Japanese in mainland China. 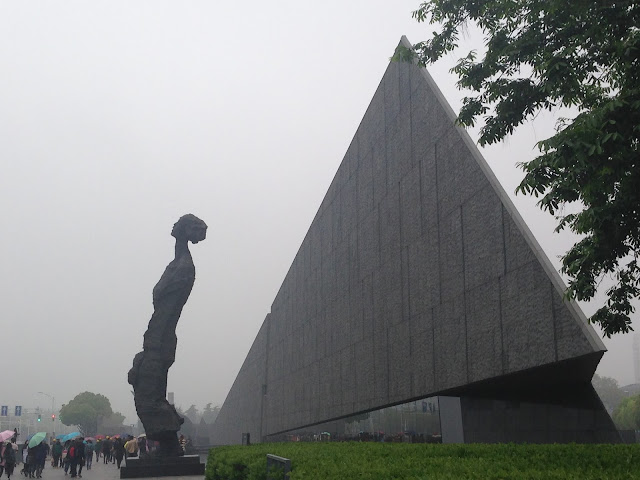 The front entrance is marked by a row of statues portraying the horrors brought upon Chinese civilians.
We arrived late that evening to our hostel in Hangzhou. Hangzhou’s main tourist claim to fame is the West Lake, a small lake that has inspired poets and painters throughout Chinese history. The usual tourist goal is to see the “Ten Scenes” that are either on or around the lake. Our first day brought nothing but rain, so we used the day to relax and catch up on some TV. The next day provided perfect sunny weather, so we rented bikes from our hostel and set out to venture around the West Lake. Our goal had been to see most, if not all, of the fabled “scenes.” For the most part, we succeeded, all the while dodging the ever-present matching-hat-wearing Chinese Tour Group. 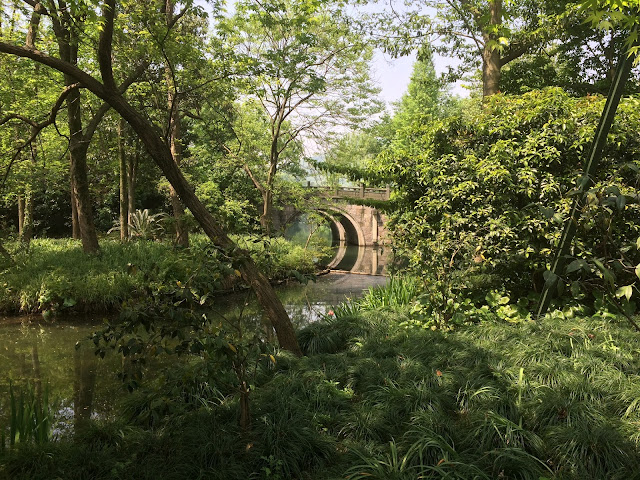 Not one of the Ten Scenes.
﻿ 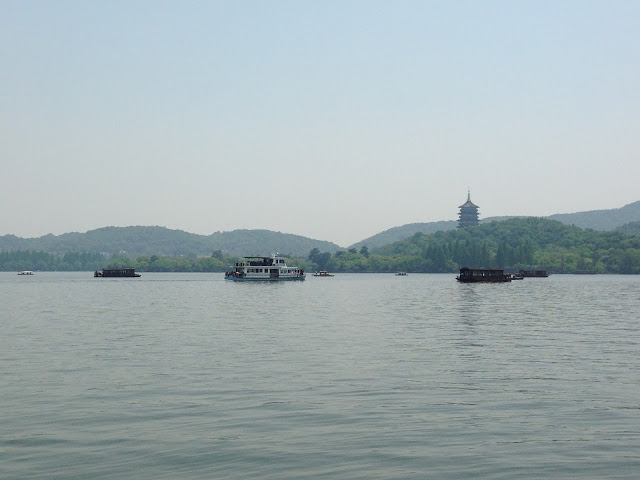 Leifeng Pagoda from the Su Causeway, both being one of the Ten Scenes. 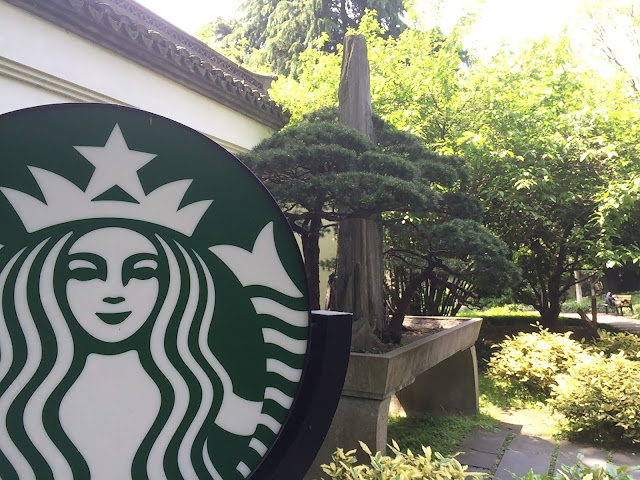 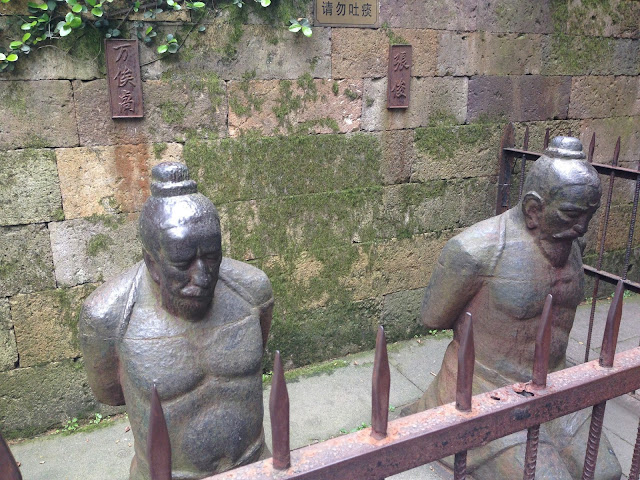 These were the two conspirators in the death of Yue Fei, a (real) Chinese folk hero. For their role in his demise, statues of them kneeling are at Yue Fei Temple. The statues have been cursed and spat upon over the years, necessitating replacement and a barrier.

View of West Lake from the top
﻿ 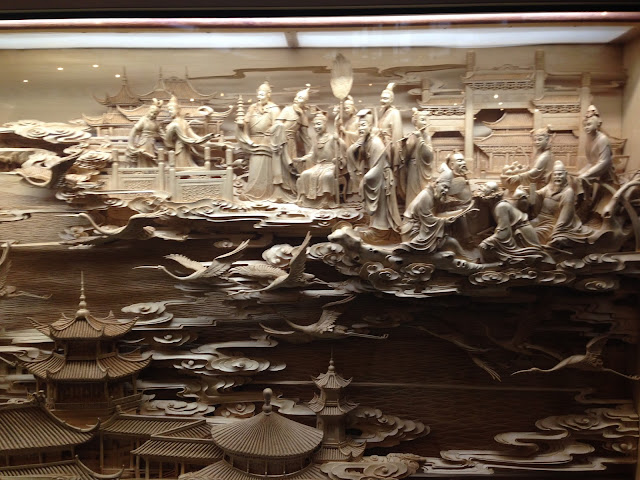 Every floor of the pagoda was surrounded by these elaborate wooden carvings that told the story of the Legend of the White Snake.
Sadly, there were no high speed trains to our next destination (though there will be by the end of 2015!), so we so traveled in the less luxurious style, a coach bus to Huangshan, the “Yellow Mountains.”
Posted by Christy at 12:07 PM