We arrived with our feathers still ruffled from the poor experience with the guide in Dazu, but quickly warmed to the city. We booked our tour to the panda breeding center for first thing the next day. The breeding center was one of my favorite experiences so far. We were there as the center was opening and the pandas were being fed; it was a cuteness overload. We got to see a range of ages, some just barely a year and some decades old. The nursery either wasn’t open or did not have any babies, so we weren’t able to see any of the tiny ones, but the experience still felt complete. 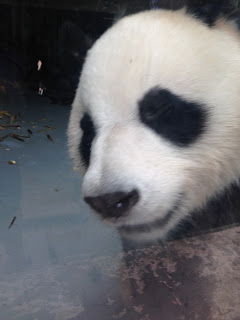 Just look at that face 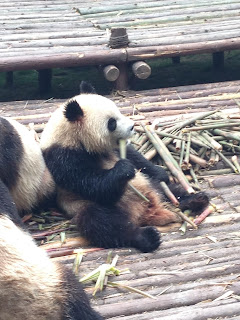 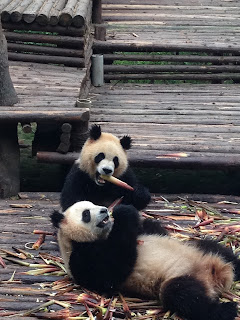 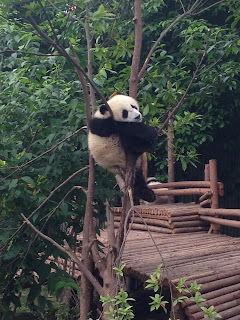 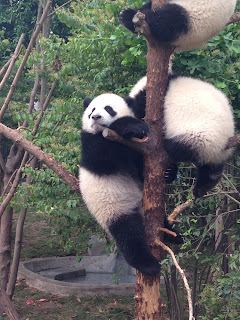 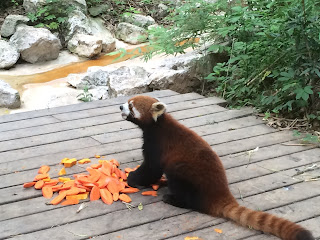 They had red pandas too!


Our second day in Chengdu we visited  Mount Qingcheng, the birthplace of Taoism and Dujiangyan, an ancient irrigation system considered to be an engineering marvel for its time period. The first was on a mountain, where we cheated and rode to the top of on a cablecar in order to save time and ensure that we would also be able to make it to Dujiangyan that afternoon. 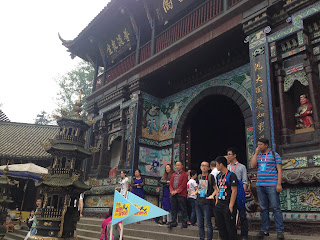 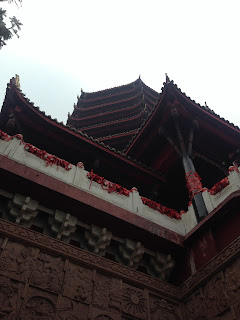 Looking up at the pagoda 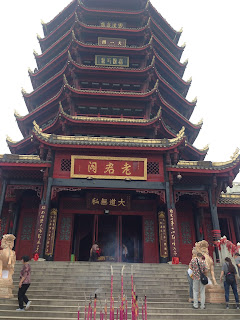 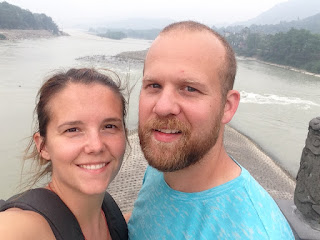 Here we are at Dujiangyan 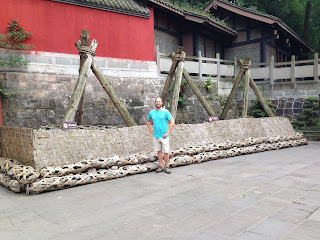 Ancient dykes!
On Friday we went to Leshan mountain, the home of the world’s largest carved sitting Buddha. Measuring 233 ft this Buddha was started in 703 AD by a monk who hoped that the Buddha’s presence would help calm the waters of the river in order to improve navigation. Well it turns out the rocks displaced from the carving were dumped into the river and unintentionally made it navigable, so I guess it worked? The scale is astounding and it is hard not to feel impressed when standing at the bottom looking up. We spent a few hours walking around the area and saw some ancient tombs which were carved into the mountainside. They are all over the Leshan area and the visual effect is similar to a honeycomb. 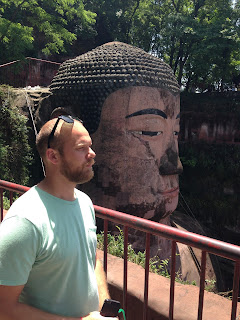 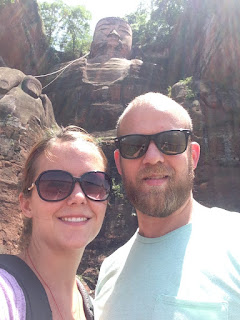 At the bottom looking up! 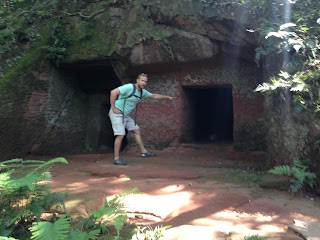 
Our last two days in Chengdu were spent hanging out in the city and visiting the antique market, People’s Park ,and then getting some work done planning for Europe! During one of our city excursions, we stopped at a little noodle stall in the train station for lunch. Jared has an app on his phone called WayGo. This app allows a live translation of text and was one of the main tools we had been utilizing to order food or otherwise determine the meaning of unknown text. If the menu is written in a clear enough manner and the colors of the writing do not clash too much with the background, it is a huge help, especially in discerning the type of meat that is in a dish, since pictures can only convey so much. Anyway, with the help of Waygo we ordered a bowl of noodles each. This was our first real experience with Sichuan cuisine. It was freakin’ spicy. Like, Jared’s brow broke out with a nice sheen of sweat. To add to the spiciness, the pepper named after the province- the Sichuan pepper- has an incredibly numbing effect as well. So, not only is your mouth on fire but your lips are all tingly and numb. It is a super experience. 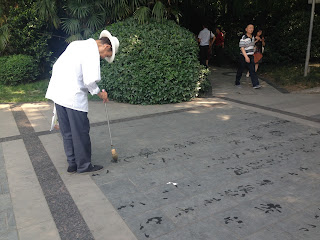 Writing calligraphy with a water brush in the park- I'm sure it has something to do with the ephemerality or something... 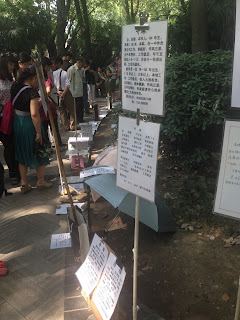 These are advertisements posted by parents for their children to find a husband or a wife- the marriage market!


We spent the last night on a train and woke up the next day in Xi’an. Our cabin mates were PhD students with a box full of rabbit bones on which they were going to run tests for stem cell research. We passed some time chatting with them and they even shared a cab with us into the city the next day.
Posted by Christy at 1:02 PM