As if I wasn’t already confused enough with the names of all the cities and places in China, Huangshan definitely made it worse. First of all, there is a mountain and a national park named Huangshan. The city at the base of this mountain is Tangkou. Then, an hour away is another city (through which most trains and buses transit) called Huangshan. It is difficult enough for a speaker of a romantic language to remember all of these 'foreign' sounding names in the first place, and then they have to go ahead and throw in duplicates. We stayed the first night in Tangkou, hiked the mountain and then stayed that night in Huangshan city. I had to ask Jared like 5 questions just to write the above few sentences.

Confusing names aside, something that is very cool about China is how much they treasure and respect their natural wonders. Something that is as equally humorous is how they go about enjoying these natural wonders. There are cable cars, trams, ferries and even sedan chairs carried by porters, all of which serve to eliminate the need to walk or climb the required steps. To be fair, while this is humorous, it is also nice because it allows people of all ages and of differing degrees of capability to access the parks and scenic areas. With that in mind, we started our day at Huangshan mountain by taking the cable car to the top. After getting to the first peak, we snaked our way through the tour groups and explored different views and peaks. We even found a place to have a morning snack without anyone else around. The views were as breathtaking as the number of steps. We had planned to see the sites as the Chinese do and were going to take the cable car back down the mountain. To our surprise, when we got to the ‘down’ cable car, thoroughly exhausted and ready for an easy ride, the cable car was out of order. We definitely weren’t laughing at cable cars when we had to go down a solid three miles of stairs. We walked a total of 17 miles that day, much of it either going up or down stairs. My calf muscles hurt for the next 4 days. It was worth it though and helped us get mentally prepared for our two days at Zhangjiajae. 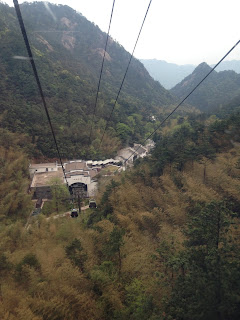 Looking down from the 'up' cable car 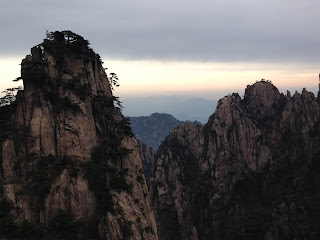 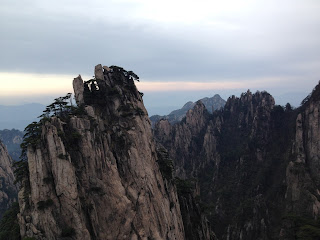 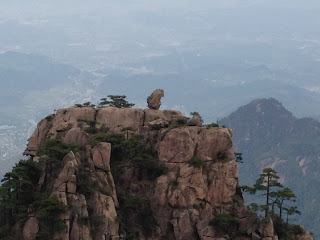 This particular rock is called Monkey Watching the Sea... I can see why. 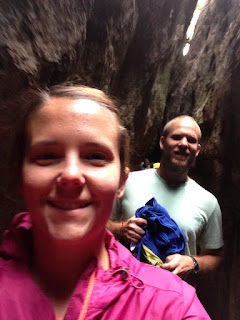 On the descent, narrow and treacherous (not really)
The next day, before we hopped on a night train (and in an effort to work some of the soreness from our muscles), we took a day trip to see two nearby ancient villages. Xidi and Hongcun are two villages which are considered to be representative of local style residences. The cities originated around 960 AD and still function as places of residence and everyday living for the local people. The villages kind of felt like living museums; we would walk into a tourist site and see the family that still lives there. Kind of odd but kind of cool. 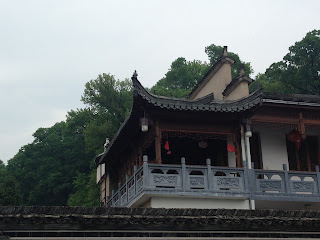 A balcony among the trees 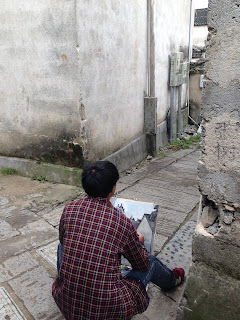 There were students painting in the streets in both cities 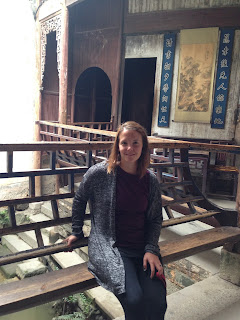 I thought this little balcony nook was pretty nice 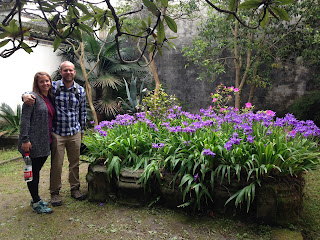 Hey- look! We have bodies, not just heads... someone took our picture for us :) 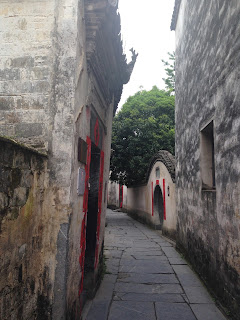 A winding path through the city


Before we went to Zhangjiajae we visited a city called Fenghuang, the Phoenix city.
Posted by Christy at 12:08 PM