Two bedraggled, jetlagged Hedges trudged into Athens at about 1 pm. We had grand plans to visit the Archaelogical Museum that day as it was only a 15 minute walk from our hostel. Those plans quickly fell to the wayside when, following the recommendation of our hostel managers, we had our first taste of the gyro. The gyro is the most delicious food on the planet and filled our bellies up to the warm happy place. We therefore had the jetlag and belly-full combination which led straight to extreme laziness. Instead of the museum, we went to a nearby grocery store and bought some food to cook a breakfast mix for the next few days. In the community kitchen, we sat and chatted with a fellow traveler while frying the potatoes, onions and peppers. It was a bit like a breath of fresh air to be able to cook and eat fresh vegetables and drink the water. After four months in Asia, the smallest hints of the ‘Western’ world were inappropriately exciting. For instance, this first afternoon we were walking in the streets and in public for about four hours and during that time we didn’t hear a single person hock a single loogie. It was magical silence for my ears. The feeling was very similar to when we first arrived in Asia; everything seemed so shiny and new. Cheese in the stores! Fresh vegetables! PITA! 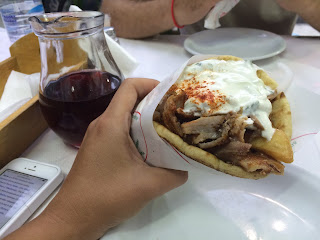 
We went to bed at about 9:00 and woke up at about 9:00 the next morning. Actually feeling refreshed, we started the day in full force and went to Syntagma Square and saw the changing of the guards, strolled through the National Gardens and started our archaeological adventure at the Temple of Zeus. The size of this particular temple set the scale for ancient Greek ruins. Walking around the few remaining columns was humbling and a cause for introspection; such big beliefs spur such big buildings. From our perspective we could see the Acropolis up on the hill and walked through the old Plaka neighborhood to get to the entrance gate. We walked up the southern slope and first encountered the ruins of the Theater of Dionysus, one of the theatres where the Greek drama was born. Since Greek drama is the beginning of all drama, it's basically the birthplace of theater. "The theater! The theater! What's happened to the theater?" Not sure what the ancient Greeks would think of White Christmas but I imagine they might echo Phil's sentiments. 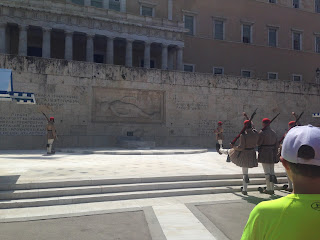 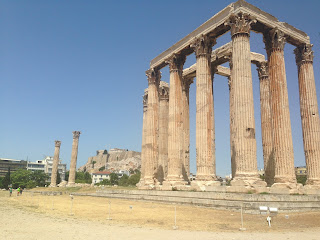 Such a grand temple 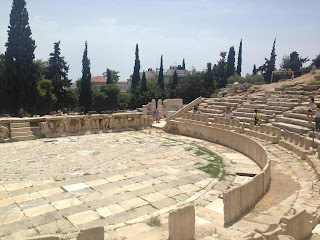 The theater of Dionysus

Following the path up the slope we next came upon an even bigger theater, the Herodes Atticus Theater, still used for productions in the present day. It would be amazing to see a performance in this ancient venue but I have a feeling a ticket is an expensive and highly sought after commodity. 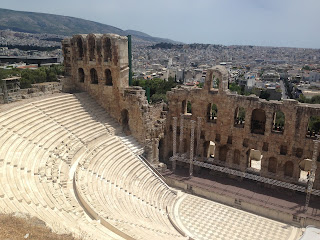 The theater of Herodes Atticus


The first building which serves as an entrance to the acropolis is the monumental Propylaea. Then on the hilltop itself is, of course, the Parthenon. The Parthenon was a temple dedicated to the goddess Athena, the patroness of Athens. She won this honor after she defeated Poseidon in a contest for the city by giving the people the olive tree. In addition to the Parthenon is the Erechtheion, a split-level building with carytids (sculpted female figures) as columns on its porch. There was quite a bit of construction going on for both the Parthenon and the Erechtheion, but the scaffolding did little to diminish the impressiveness of the structures. When looking at partially demolished ruins it requires one to use one’s imagination to fill in the missing pieces. Or, you can just look at the Lego model in the museum. 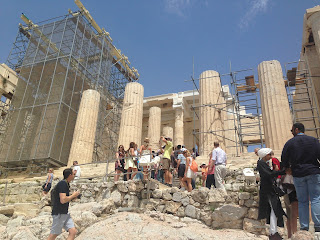 Walking up the acropolis 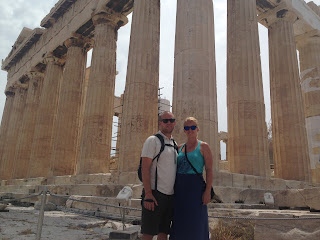 Amazing. Monumental, if you will. 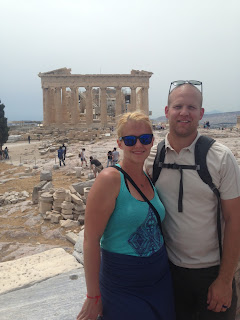 View from above
We didn’t actually go to the museum right after visiting the Acropolis. Instead, since the weather was nice, we walked through the old streets and the flea market to visit the ancient Agora. An agora is a public space, usually with one prominent building, where people would gather to discuss politics, socialize and carry out other types of business. In the ancient Agora of Athens there also stands the Temple of Hephaestus, one of the best preserved examples of architecture from ancient Greece. Also, in the Agora Museum we saw examples of early voting, jury duty selection, and an example of the practice of ostracism, where Athenians could vote a citizen into exile for a period of 10 years. Jury duty involved citizens’ names being lined up in a horizontal fashion and then for each line a white or a black ball would be randomly produced. If the ball was white, you had jury duty, and if it was black, it was back to work. 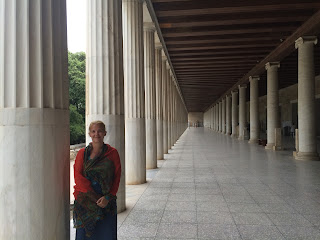 Outside the Agora museum 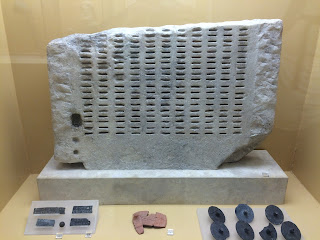 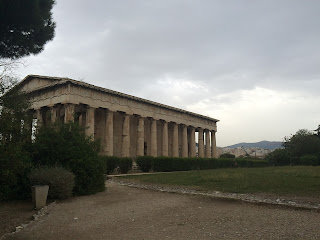 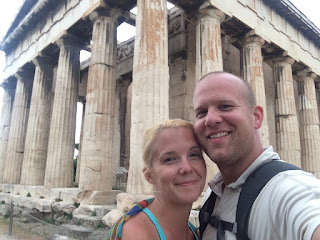 
Our second day in Athens we visited the Kerameikos cemetery, where evidence of burials dates back to 1000 BC. This was also the site of another agora and the intersection of major roadways. The remains were pretty scarce and overrun with grass and weeds, but it was easily the oldest place we have visited since we began our travels and this alone justified the visit. After the cemetery we returned to the Acropolis museum. The museum does not allow pictures of most of the displays but the information was plentiful, and on the top floor they have the friezes or metopes from the Parthenon arranged in the same manner they would have appeared on the building. The few hours spent there was worth it, but we were hungry bears afterwards and returned to our neighborhood where we went through the local market and bought fresh peppers, apples, oranges, apricots and tomatoes and then we picked up some cheese and meat from the supermarket. We had a picnic style lunch in our common kitchen while watching Dr. Who on Netflix. A perfect lunch for the Hedges. 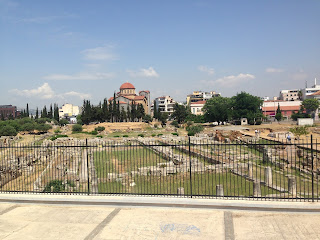 The next day we took a day trip to Delphi, the most important site for the god Apollo and the home of the mystical Oracle!
Posted by Christy at 6:49 AM