In Nafplio we stayed in an apartment that we arranged through Airbnb. The lady renting out the apartment met us at the bus stop and drove us to the room! It was a nice gesture and very much appreciated. The apartment was small but had a little stove top, a balcony, and a bed. Through our travels, we have realized how little space is actually required to live (at least while traveling). Nafplio is a popular weekend destination for Athenians and we really enjoyed it as well. The Palamidi Fortress is the main attraction here, built by the Venetians in the late 1600's on a large hill.  Our first day we climbed the 913 steps to the top of the fortress and wandered around for a few hours. Then, due to a limited bus schedule, we visited the two nearby archaeological sites the next day (originally we had planned to see one a day). With our sightseeing accomplished in one day, our last full day in Nafplio we went for a run along the coast, took a boat out to an island castle, and sat in a café with wifi access and ate amazing loukomades (Greek donuts) for a while.

A panoramic view from the top of Palamidi 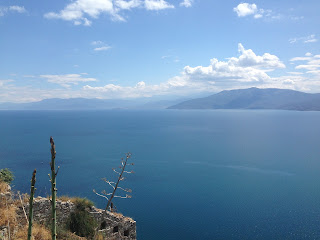 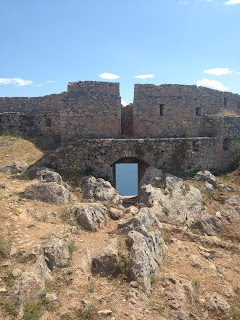 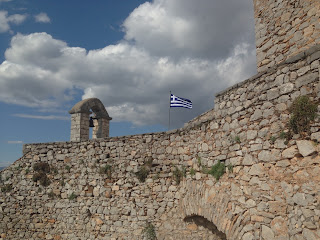 The Greek flag blowing in the wind


Mycenae was the first place we visited. Mycenae is a UNESCO World Heritage Site, and was one of the first capitals of the ancient Mycenean civilization in the 2nd century BC. There is very little left to amount to anything substantial but, walking along the path and seeing the ruins of a palace, temples and even some graves, Jared and I postulated on what a person who lived there would think if they were to return today. Obviously they would be in disbelief at some of the modern inventions, but to see the remains of their home from 3000 years ago would be pretty surreal as well. 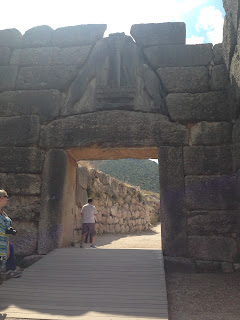 The Lion Gate, one of the earliest known instances of monumental architecture and the largest remaining sculpture in prehistoric Greece. 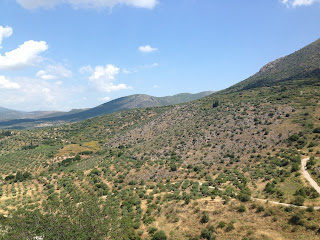 The surrounding hills were beautiful, and it easy to see why the Myceneans made this place the center of their empire 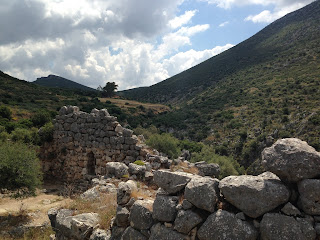 Some of the ruins nestled in the hills


Our second stop of the day was to Epidaurus. This area is famed for the huge and largely intact theater. This theater can accommodate up to 13,000 people, and the acoustics are near perfect even by modern day standards. There is a festival here every year and different performances take place at the theater. Of course it started the day after we were there. Hmpf, stupid public buses with no buses on Sunday. The nearby village that spurred the creation of the theater was dedicated to the god Asklepios. This was the healer god, and amongst the ruins there was evidence that there was a ‘hotel’ area where patients and families could stay while they were seeking the healing powers of the god. However, among this rather large area of ruins, our favorite part was the remains of an ancient church. The walls were still standing in places, and there was a stone slab altar (we assume it was erected some time in recent history). It was separate from the other ruins, so it was more peaceful, and the shape and architecture of the church was still evident. 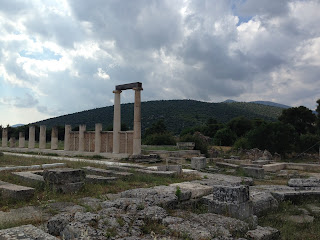 Part of the ancient hotel area 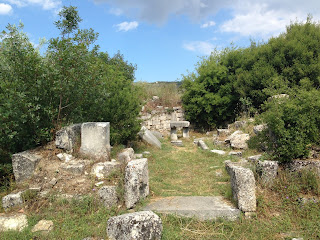 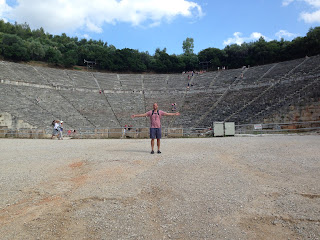 Jared in the center of the stage 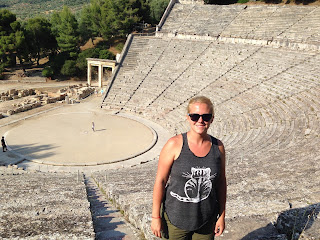 Looking down from the audience


As I mentioned, for our last day in Nafplio we took it easy. As much as we enjoy adventuring and exploring we have also come to really treasure these days. Days where we can just ‘hang out’ in a city without anything specific on the agenda. It is refreshing and often leads us to new, unexpected experiences. 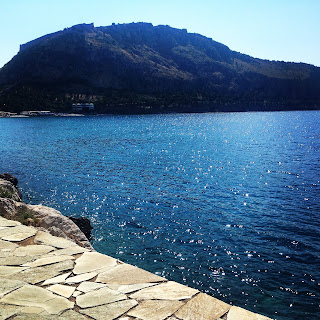 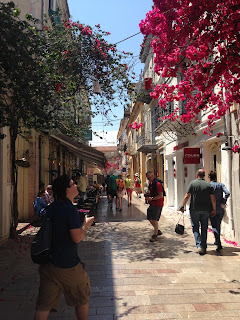 Isn't it a charming city?


We left Nafplio the morning of June 1 to head to our first Greek island adventure!
Posted by Christy at 6:58 AM