Leaving Athens at 7:30, we made it to Delphi by 10:30 and ate some of the picnic foods we packed before wandering down to the Delphi museum. The museum was interesting and provided a nice context before visiting the ruins themselves. We would have some pictures that proved we were actually in the museum, but they do not allow ‘posing’ aka ‘people-in-the-picture’ with the exhibits. Mind you, the sign noting this policy is quite small and only at the entrance of the museum. Apparently it is too much trouble to add a note to the already numerous signs which indicate you cannot use a flash. Therefore, we discovered the no-people policy when two attendants verbally accosted us. It was as if our ignorance of the policy offended them personally and their response was way out of proportion to the supposed crime. Nonetheless, we deleted the pictures (as they watched impatiently) and continued on our visit. 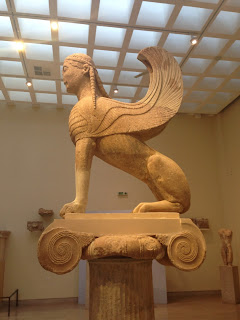 One of the statues given as offerings in ancient Delphi 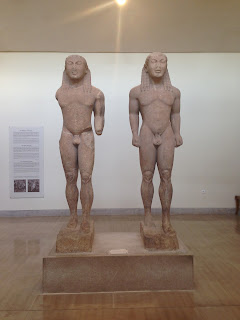 
By the time we made it outside to see the actual ruins, it had started raining. Luckily we had our jackets and umbrella, and as an added bonus for us, all of the tour groups either delayed the trip up or hurried through to get to shelter. The clouds also provided a beautiful backdrop for pictures. The main attraction at this site was the Temple of Apollo. It was inside the temple that the oracle sat and breathed the ‘fumes from the Earth’ in order to help with the prophesizing. From what we can tell no one knows exactly what it was she was inhaling. The most common theory is that it was some type of natural gas pocket. Who knows? 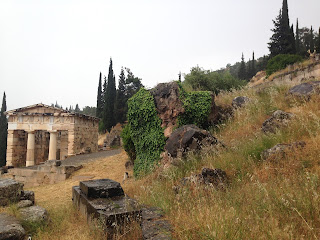 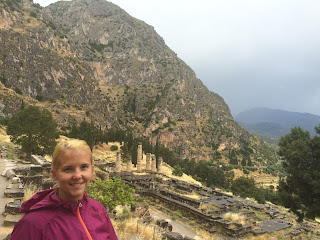 Looking down at Delphi


Down the hill from the main temple there is another section that was dedicated to Athena. Here, there is a unique round temple, called a tholo, for the goddess. This shape was apparently uncommon in ancient times and historians are uncertain as to its purpose. One theory is that the temple was originally dedicated to Ge or the goddess of Earth, one of the predecessors to the Olympian gods. 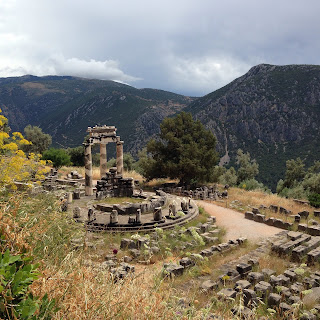 The tholo of Athena 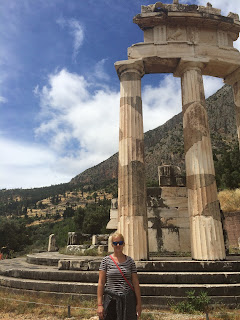 Tholo at ground level with Delphi in the background


Delphi was our last stop with Athens as base camp. We left the next day for Nafplio, a city with a view!
Posted by Christy at 6:50 AM