We arrived to our next rented room at about 2 pm. We decided to go ahead and catch a bus to the city center to try and see the Duomo (we visited Florence during our last trip to Italy but weren’t able to go inside the Duomo). We made it inside and it did not disappoint. The exterior is stunning and the interior is not too shabby either. Instead of trying to climb the towers or see the optional museums, we went to the Uffizi and attempted to reserve our tickets for the next day. However, when we made it through the queue, the ticket agent told us the next day was booked. Well, we still had a little less than two hours left until closing, so we went ahead and made our visit then! It was an unplanned successful afternoon and took some items off our list for the next day. 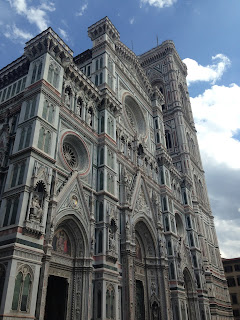 This building is unbelievable 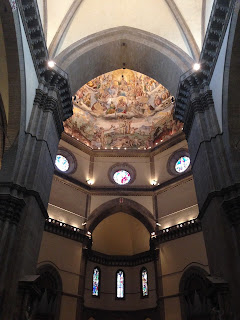 A peak of the painted duomo
Our unplanned afternoon turned out to be quite fortuitous. We were not aware that July 26 is the Feast of San Giovanni (St. John), Florence’s Patron Saint. As a result of this celebration, many sites were either closed or had irregular hours. We found out the hard way that the Piazza di Michelangelo (overlooking the city) was completely blocked off to shoot fireworks, yet fortunately discovered that if you are willing to walk a few more stairs to a little church further up the hill from the Piazza, you can still get a pretty good view of the city. Next we ate some gnocchi and visited the Ponte Vecchio (“old bridge”), the only bridge in Florence to not be destroyed in WWII. After that, we toured the Palazzo Vecchio and caught some of the parade through the city. 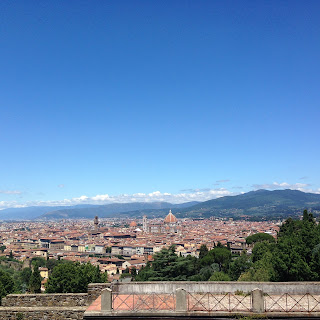 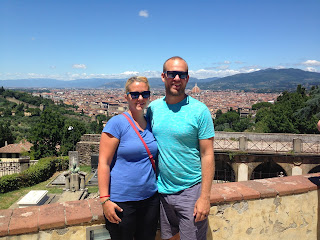 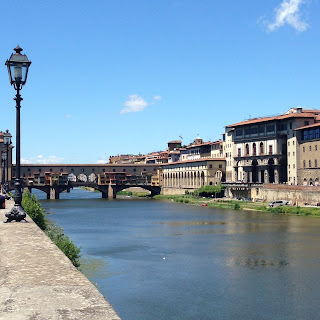 
Part of the Saint’s Day celebration is Calcio Storico , the championship match of a sport that is a combination of rugby, soccer, and kickboxing. This was held in a large piazza right in front of a church in the city center, and we discovered after trying to get in that tickets were required for entry. Since we had been running around all day, we sat with a big old bottle of water in a café and watched the match on tv. Our day ended with some fireworks which we watched from a bridge nearest to the apartment where we were staying. 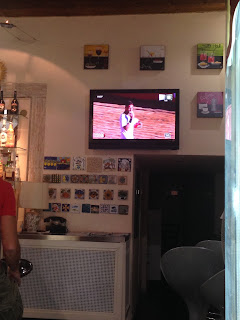 Calcio Storico on the TV


It was a quick stop in Firenze but our next stop was for four nights in Bologna in Emilia Romana- the food capital of Italy!
Posted by Christy at 2:43 PM