To get to Palermo we left Athens and had a (what we presumed would be) short layover in Rome. Yet, after landing and rushing to grab some food, we discovered that our flight had no gate. Thus, the waiting commenced. Once a gate was assigned we were almost an hour behind schedule. I communicated to our Air BnB host that we were delayed and she graciously accommodated this unseen turn of events. Once we arrived in Palermo, our host’s friend, Antonio, met us and showed us the apartment. It was so cute! Unfortunately, the air conditioner was not working (although at first we were told it just wasn’t available). This was initially a disappointment and after Jared woke up the next morning at 6:30 from the dogs barking right outside the apartment (we had to leave the doors open since we had no AC) we had to ask our host for either the AC or a fan. This is when she told us the AC was broken, but we were provided with a fan which helped immensely and allowed us to sleep peacefully through the night with the doors closed to the sounds outside. 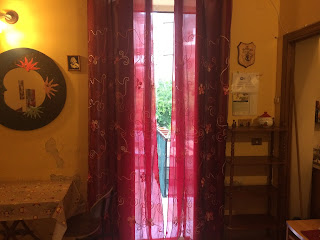 \
Our cozy place in Palermo 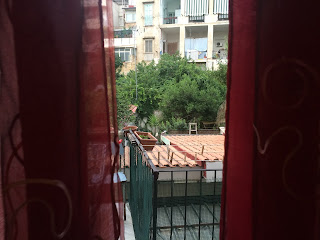 The roofs of the roof cats
After we resolved the apartment issue, we headed out to explore the wonders of Palermo. Palermo is a very diverse city and is home to people of various cultural backgrounds. Unfortunately, the city is also one of the dirtier cities we have been to. The state of some of the streets and public spaces reminded me of India. For example, even though we loved our apartment, there were two rather large trash piles on the street right outside. Despite this, Palermo is home to some very beautiful structures. We visited several different churches during our afternoon of exploration. The most impressive of these is the Palatine Chapel in the Royal Palace. This church was built by Roger II in 1132. He is responsible for a few other Norman style churches in Sicily and the style of this church is repeated and modified all over the island. One of the purposes of the church architecture and decoration was to demonstrate unity between different religions. For example, the pattern of the floor tiles and incredible ceiling is more Islamic, since geometric figures are the focus rather than any human representation. These are then juxtaposed with the distinctly Norman mosaics of biblical scenes. That evening we had our first taste of Italian pizza (well, first taste this time around) and were also treated to an entertaining scenario where our neighbor across the courtyard fed the cats that live on her roof using a broom handle attached to an upside down dust pan. 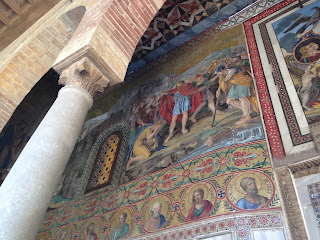 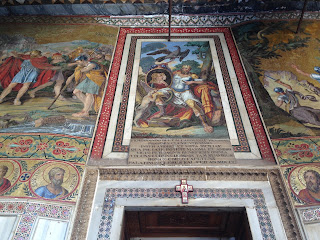 The images were stunning
The following day we went to see more Greek ruins! Ha! We just can’t get enough Greece. These ruins in Agrigento on the southern coast of Sicily were quite well preserved and although it was hot, we enjoyed the day strolling through the ancient area and had a nice picnic. Due to an abbreviated bus schedule, we missed the train we intended on taking back to Palermo and instead found ourselves with a nice, cold glass of wine and an appetizer plate. It was a happy accident and we had nothing to rush back to in Palermo anyway. 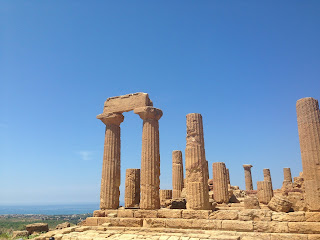 Ruins of the Temple of Juno 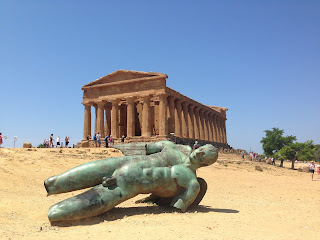 The Temple of Concordia was also used as a Christian Church. The bronze statue is a recent addition.

Our last full day in Palermo we ventured first to the Norman Cathedral of Monreale. This was a bigger version of the Palatine Chapel and was really mind-blowing. The mosaic artwork is unlike anything I have ever seen. The way that details are communicated through the use of the tiles is so impressive. On the walls is the story of Christ as well as others from the Old Testament. Jared and I spent almost an hour listening to our audio guide and wandering through the church admiring all of the historical details. After our visit to the Chapel, we hopped on another short train to the town of Cefalu. This is a little town on the beach, and we laid in the sand for a few hours admiring the view of the blue water, red-roof terraces, and sloping mountains. Before catching the train back to Palermo we had intended to eat dinner in the beach town. Unfortunately, we had not yet adjusted our schedule to the Italian restaurant/social life schedule, and we forgot that most restaurants don’t open until 7 pm at the earliest. We pushed back our return to Palermo yet again and enjoyed our beach front meal. Later that evening, our little courtyard produced another fun diversion. A different neighbor (not roof cat lady) seemed to be having high school band practice that started at ten o’clock at night. Oh, it’s cool guys, we weren’t going to go to sleep until midnight either. See?, we’re so European. 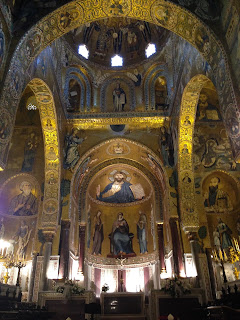 The whole building seemed to glow in gold 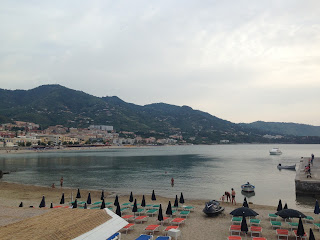 A taste of the Italian shore 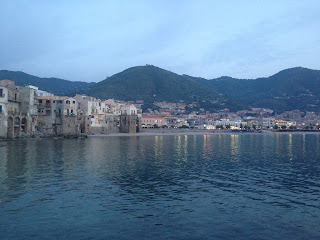 That morning we left early for what we thought would be our early flight to Naples. Upon arrival, however, we discovered that the flight had been postponed from 9:30 to 12:45. Oh, it’s cool guys, we don’t have places to be anyway.
Posted by Christy at 12:30 PM