Rome is one of the most popular tourist destinations in the world, and it is more than deserved. Rome was the first destination where it became obvious that summer vacation had begun, as we encountered thousands of fellow tourists here. These tourists flocked to see the beautiful old ruins, magnificent churches ,and unparalleled architecture, just as we did. This city truly is magical and it is hard to find a street that does not hold a special kind of charm unique to Rome. We stayed at an Airbnb with our host, Alessandro and his sweet cat, Gasperino, in a non-touristy neighborhood called Porta Forba Quadraro. Our host was born and raised in Rome and had travelled quite a lot (although he hasn’t even seen the Sistine Chapel!- You have to go Ale, if you are reading this!) and was able to give us an interesting perspective on some of the places we have been as well as advice on the sites in Rome. For instance, when discussing Agrigento (the ruins I described in the post about Palermo), he alluded to an overall feeling of indifference towards the ancient ruins. This attitude made perfect sense after we experienced the Colosseum, Palatine Hill, and the Roman Forum. These three iconic places are all near each other and all included in the same ticket price (we bought a RomaPass which gave us two free entrances, free public transport for three days and other discounts). There is nothing that compares to the Colosseum. I realize I also said this of Pompeii but both statements are true. The Colosseum is one-of-a-kind just as Pompeii is. The size of the structure is impressive, and when you add the known history along with cinematic elaborations of true events, images of the past come easy to you as you stare down at the partial floor and maze below. Palatine Hill is also home to some colossal buildings. There were buildings as high as three stories and the complex of ancient palaces and gardens overlooks the city and the Roman Forum, as well as Circo Massimo. Circo Massimo was the only part that of the first day that we could describe as disappointing. The ancient grounds of the chariot horse races are pretty unkempt and barely resemble the type of place we were expecting. The Roman Forum is essentially an ancient town square. Here is where the important temples and political buildings were consolidated. An easy stroll around the area and you see remains of ancient temples and fountains. 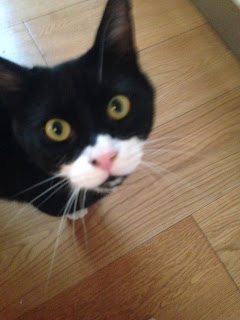 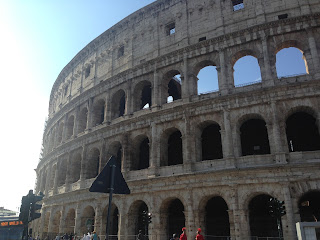 Classic picture of the Colosseum 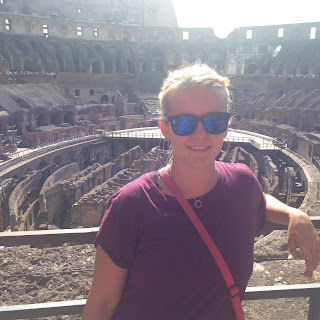 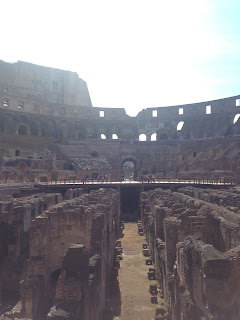 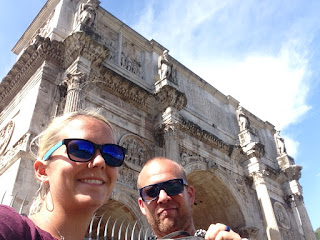 In front of the Arch of Constantine 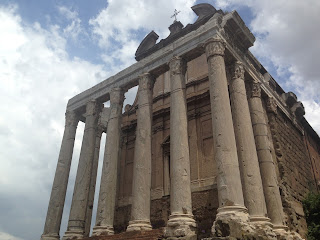 The Temple of Antoninus and Faustina 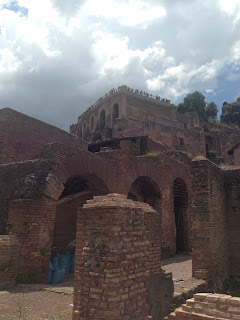 Looking up to Palatine Hill from the Roman Forum


After these explorations (we spent a little over 4 hours between all three), we were quite exhausted. We still had a goal for the day though, so after a lunch of some delicious pasta, we headed on to the Castel Sant'Angelo. This fortification is relatively close to the Vatican City and was originally built by Hadrian as a tomb for himself and his family. After serving that purpose for a while, it was transformed into a military base and then eventually became an escape stronghold for the Pope. 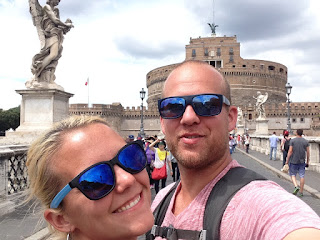 On the bridge walking up to the Castel 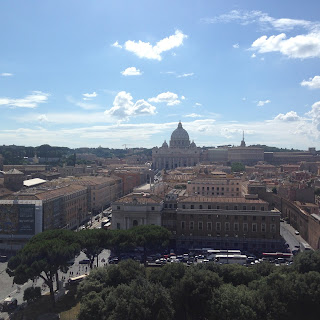 View of the Vatican from Castel Sant'Angelo

We ended the day by returning to the house, eating dinner, and then Ale invited us to have a drink with him and his friend. It was a lovely evening spent in conversation and we had our drinks in an old horse stable! The next day was a little more relaxed and we didn’t leave the house until late morning but we were able to still visit three of the four Papal churches (the 4th is St. Peter’s which we visited the next day) and the Museum of Modern Art. That evening we went to the Trastevere area and walked around while enjoying the ambiance of this beautiful Roman neighborhood. We ate at a delicious fish market and had a longer than expected commute home (since the metro was closed for construction), but we made it back and quickly went to bed to get some rest because we were set to get up early the next morning for our tour of Vatican City. 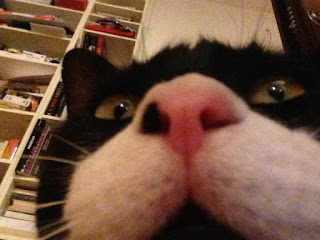 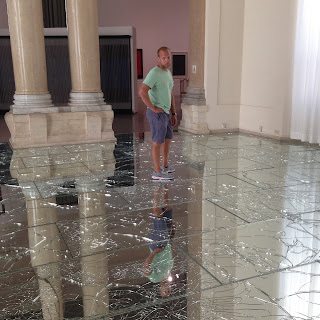 I think he was grumpy in this picture but the floor was pretty cool at the Modern Art Museum
We had an organized guided tour through the Vatican museums, the Sistine Chapel and St. Peter’s Basilica. We even got to wear the cool headsets we had snickered at on other occasions. I really, really enjoyed this day. Even though we have already seen quite a few things that we had only previously studied, not many of them had been world-famous works of art. I am not a huge art enthusiast; it is a skill that I can only superficially appreciate since I have very limited technical knowledge. However, with these paintings, and the Sistine Chapel in particular, you do not need technical knowledge to appreciate their grandeur. The way that the figures seem to be coming off the ceiling is unreal. I could have spent much more than 15 minutes in there looking at it all. I don’t think the Swiss Guards would let me lie down in the middle of the floor though, so we only stayed for our allotted tour time. We were able to stay longer in St. Peter’s Basilica though and enjoyed the many beautiful works of art there as well. Another example of something I studied about in my one art history class is the statue La Pieta. This was made by Michelangelo when he was only 21 and shows Mary holding her recently crucified son. It’s simply beautiful. 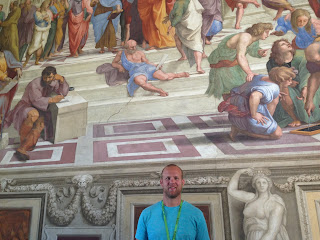 The School of Athens... and Jared. 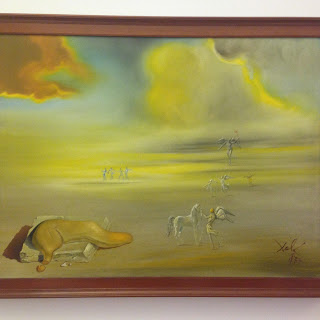 There was even some Dali hanging in the Vatican. 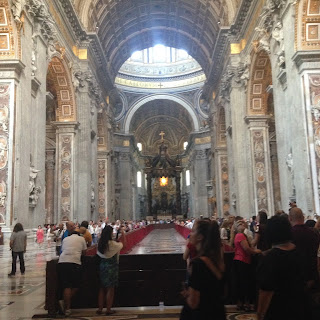 It is hard to capture the Basilica in a single picture. It is so immense and so stunning. 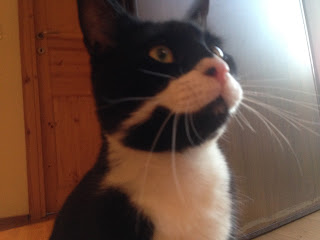 Gasperino! How'd you get into St. Peter's?! Just kidding.... 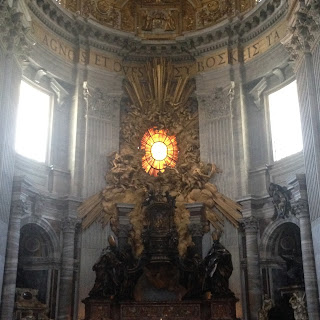 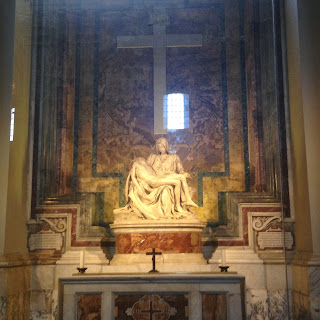 La Pieta
Our last full day in Rome we started with a nice run near our house by some ancient Roman aqueducts. It was a beautiful park and a nice way to start our last day of exploration. Once in the city, we walked around the old part of Rome and saw the Spanish Steps, Trevi Fountain (under construction) and the Pantheon. We stopped along the way for gelato, granite de café, bruschetta (and wine), and some fried fish. It was like a site seeing progressive supper! 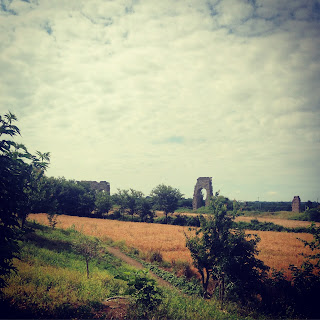 This is not a painting! It is real life. 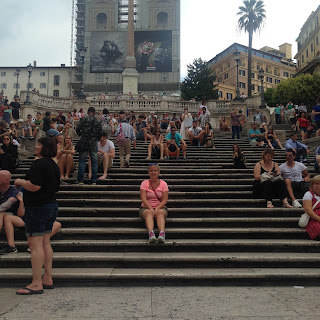 I'm on the steps! The Spanish steps. 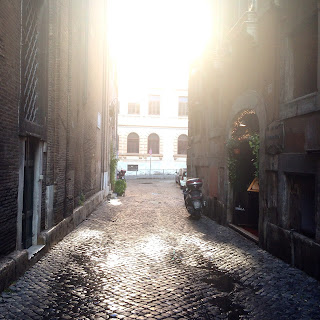 The sun is going down! In the Jewish neighborhood. 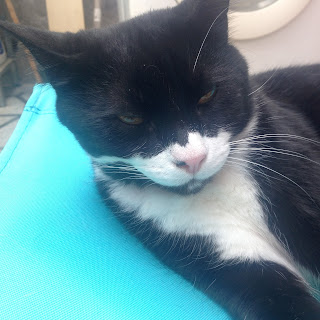 Sleepy Gasperino! I think he got tired of pictures. 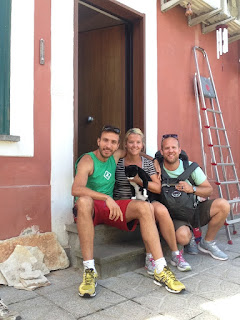 All of us in for a pic before we left town!


The next morning we left our new friend, Airbnb host and the best tour guide we have had. Alessandro and his playful cat Gasperino made our time in Rome unforgettable. Thanks again for everything Ale!