The delayed arrival to Naples (Napoli) caused some trouble with our check-in to our Air BnB. The host had arranged to meet us at our original time and although he said he would be able to accommodate us when we arrived later, there were some problems with communication and we ended up waiting for 45 minutes for someone to arrive and let us into the apartment. As a result, the day was shot. Instead of sightseeing, we walked to the Carrefour (a French grocery store chain) and bought some food to cook in the kitchen for breakfast. A local pizza joint, of course, was for dinner. After that, we finalized our plans for Naples, which would be busier than we had originally intended, and got to sleep early so we could start fresh the next day.


The next day we arrived at Pompeii right as it was opening to the public. Originally, we thought we would spend 2-3 hours here and then hop on the Circumvesuvania train on down to Sorrento and then catch a bus over to Positano on the Amalfi coast. However, Pompeii is big. Like, really big. I had no idea the size of the volcanic ash-covered town would be so great. This is one of my favorite places we have been and is incredibly impressive. Impressive as well is the fact that archaeologists have excavated so much of the city. As Jared pointed out, and as we saw in the Napoli Archaeological Museum the next day, the work in the excavation of the site itself is almost as impressive as the actual site. When it was discovered, neither the tools nor the knowledge needed to properly excavate the ruins existed, and the technologies and techniques developed for Pompeii have had a tremendous impact in other archaeological excavations in Italy and beyond. As I have mentioned before, certain sites of ancient ruins require a visitor to use their imagination to reconstruct the buildings and the activities that might have taken place in those buildings. At Pompeii, the buildings are there and the streets are there and there are still vivid frescos on the walls and you can see the baths and the old cafeterias. I felt as though I were a visitor to the town in 70 AD rather than a tourist seeing ruins in 2015. I can’t imagine that anything like it exists elsewhere. 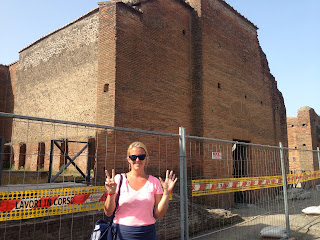 I was trying to keep track of the sites and the corresponding number description so I would know what everything was, but I don't have enough fingers.... 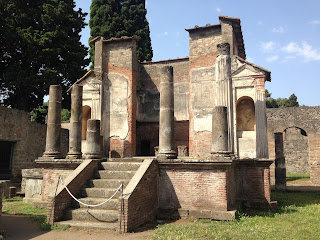 The Temple of Isis, one of the most intact structures at Pompeii 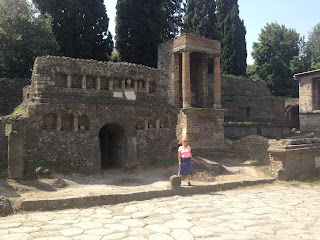 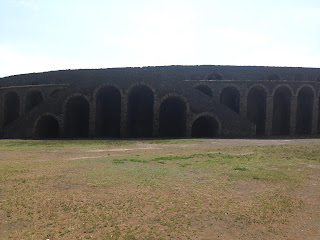 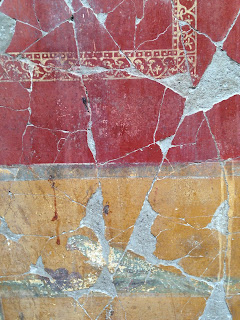 Some of the surviving colors are still so vivid 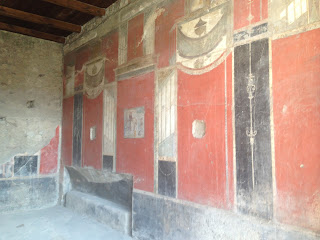 Entire walls maintained their color, it is truly impressive

After spending a surprising 4 hours wandering through Pompeii, we were sweaty and tired. However, we pushed on and ate our picnic sandwiches (noticing a theme?) and headed on to Sorrento and then took a 50 minute bus to Positano to see the famed Amalfi coast. It was as beautiful as we’d heard and we spent the afternoon (somewhat) leisurely strolling through the town. When we were done, it was another bus to take another train to then take the metro to our apartment. Gotta love public transportation. 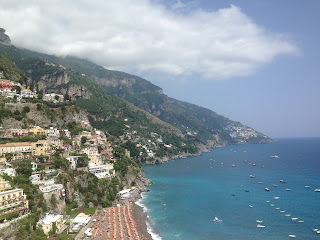 I suppose the stairs were worth it though 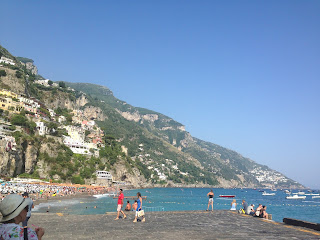 And it was nice to relax on the beach


Our last day in Napoli we spent in… Napoli! Our first stop was the Museo de Sansevero. This is the home of the famed statue The Veiled Christ. I learned about this statue in my Art History class in college. Unfortunately, we weren’t able to take pictures in the museum, but The Veiled Christ along with the other statues in the small collection were stunning. The details of the statue are remarkable; from the way the veil seems to sink in to the holes in Christ’s hands to the lace embroidery of the veil. It is something that I won’t soon forget. Also in this museum are the anatomical men. These are bones of a male and a female with near-perfect reproductions of the circulatory system. Researchers are still unsure how this precise replica of a complex biological system was achieved in the 18th century. One theory is that the creator had a way of injecting a liquid metal into the veins for it to then harden and create the resultant effect of veins and arteries. This little museum held a whole lot of wow, that’s for sure.


The rest of the day we visited several other churches, including the Duomo of Napoli, where a wedding carried on despite the presence of dozens of tourists. We also ate at the birthplace of the margherita pizza and visited the National Archaeological Museum, where there are several artifacts from Pompeii and an impressive collection of statues moved from Rome. 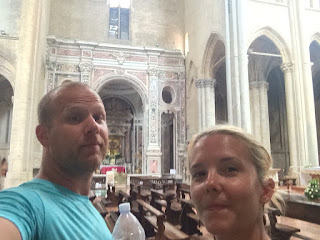 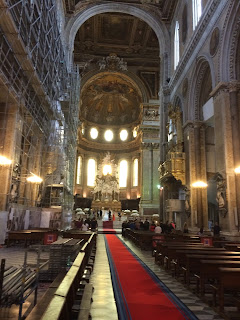 Wedding at the Duomo


The next morning it was off to Rome!
Posted by Christy at 12:57 PM