We arrived in Torino at the beginning of an Italian heat wave. The temperature was high and steadily climbing. Like many places in Italy, the apartment we were renting for four days did not have air conditioning nor did it have a fan. The first night we slept OK, the second night was pretty miserable so we asked our host for a fan. He provided one and it made all the difference in the world. The rest of our nights were nice and breezy. Our first full day in the city we had a mission to buy camping supplies (at least what we could manage to take on our RyanAir flight) in order to avoid the not only the high prices of Norway but the risk that they may not have what we needed. We found a nice little tent for cheap and a sleeping bag. We then returned to our apartment and had a nice salad for dinner. Torino is a beautiful, hip city and we went for a little walk around town before bed that night. The wide streets and majestic buildings create a relaxed, sophisticated feeling in the city. 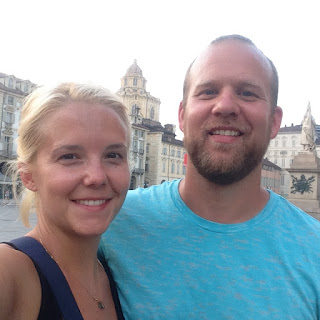 See how sophisticated and relaxed we are? 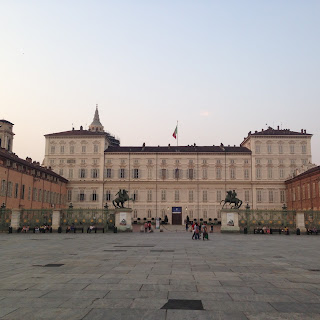 Residences of the Royal House of Savoy 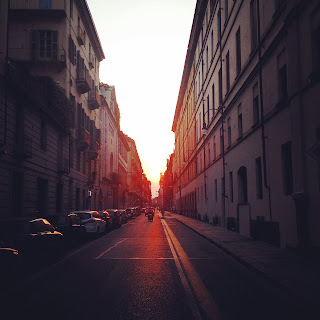 What a beautiful glow as the sun set
.


The next day we went to the famous Cinema museum (after another mail run) and had a great time perusing the exhibitions related to the history of film as well as modern day displays of costumes and set designs. My favorite parts were the sections made to look like different films or genres with informational signs explaining that particular section. It was definitely worth the effort and the euros to go see this museum in the historic and iconic Mole Antonelliana of Torino. We also tasted a delicious chocolate espresso creation (native to Torino) called a bicherin. 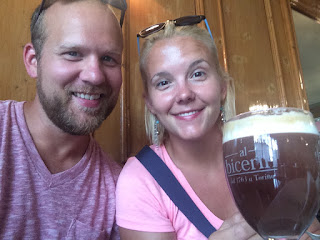 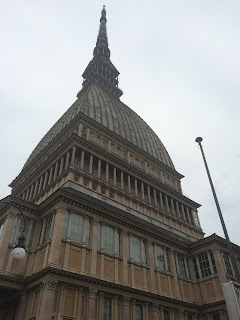 
Our final day, we went to the Royal Houses of the Savoy Family. This is one of several palaces in the Torino area as it is the city where royalty previously resided. The museum was pretty sparse but it was enjoyable to walk through the rooms of the palace and read about their history and also see some of the furnishings and paintings from centuries ago. Included with the price of admission to this museum was admission to the recently opened Galleria Sabauda. Neither of us have the ‘eye’ for discerning good vs. bad art but we are getting better at noticing themes and differences between works in the same museum or others that we have visited. As a result, our museum attention span has increased from around an hour to closer to an hour and a half. After that, we start to get antsy and distracted and we find ourselves just aimlessly walking through the rooms. As such, we left about 2 hours later and, since it was the 4th of July, we went to get a hot dog! We then had to rush back to do some laundry so it would be dry for our flight to Oslo the next day. After getting it on the line, we went for one last apertivo in Italy and said our goodbyes to delicious pasta and gelato as well. 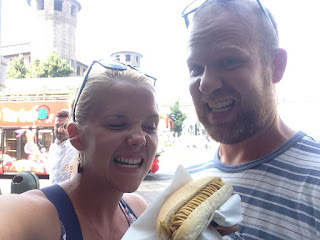 Jared was not happy about mustard on the bottom but I sure was...
Buuuut before we left we went to the World Expo in Milan! This was an incredible experience and I'm really, really glad Jared convinced his tight-wad wife to go. I could not have imagined what I experienced. Every country had a unique, huge exhibit focused on the central theme. It was a beautiful expression of global togetherness. At least, I think so. 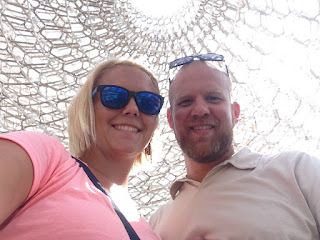 In the beehive of Britain 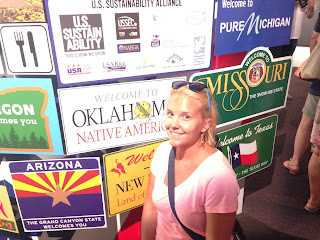 Ooooooklahoma where the wind comes sweeping down the plains 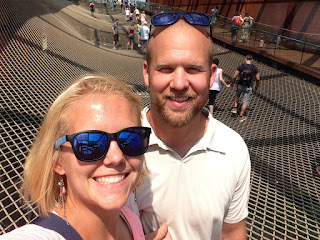 On the nets at the Brazil exhibition