We survived our first Ryanair flight with minimal damage. Our late arrival was a blessing in hindsight, as it gave us some time without sunlight, which we really wouldn’t get the rest of our time in Norway. 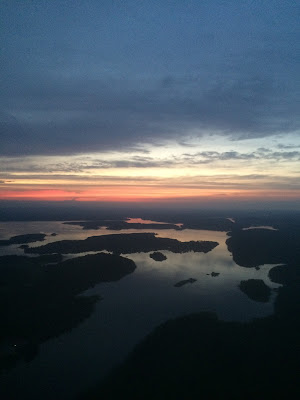 The next morning we had to finish up buying our camping supplies, so we went to the local sporting goods store and got our bedrolls, tarps, and a few other incredibly expensive items. Yes, expensive. Norway is expensive. We knew it would be, so it wasn’t a complete shock, but most things are double what we’d pay at home. So during our time there we only bought the necessities, like $4 gas station coffee and $3 Reese’s Peanut Butter Cups (you don’t understand, I hadn’t had any proper Reese’s in 6 months. Necessity.). Then we took a stroll around Oslo as the weather went through various combinations of sunny/windy/cloudy/rainy in 30 minute cycles. Oslo never quite feels like a ‘big’ city, and lacks the usual number of sites to see that you might get in other European cities. But what it lacks in sites it makes up for in beauty, largely because of its plentiful amount of green space and wide, walkable streets. I’m not sure what it looks like in winter, but in summer it’s wonderful. We visited the Oslo Cathedral, then went on to the Oslo Opera House, which has a slanted roof that you can walk on top of to get a better view of Oslo. 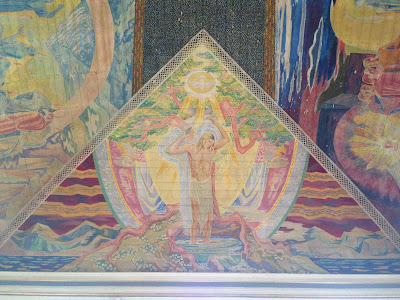 The art on the wooden ceiling at Oslo Cathedral was quite different from anywhere else. 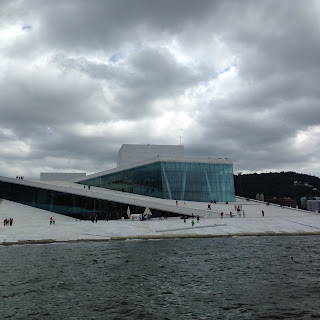 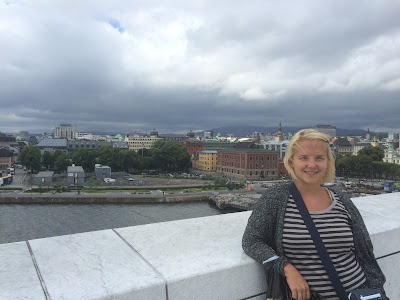 Oslo Opera House from on top
﻿
We woke up early (but not before the sun) the next morning to catch our 6:30 AM train towards the fjords in western Norway. The main line between Oslo in the east of Norway and Bergen in the west is the appropriately named Bergen Railway. It’s more than just a train ride though, as the view outside the train window is permanently postcard-worthy Norway: small blue lakes, green and yellow fields, red barns, hillside villages, glaciers, and dozens of flagpoles with the Norwegian flag flying in the wind. We only took it just past halfway, as we were hopping on another train, the Flåmsbana. The Flåmsbana is a scenic train that slowly winds through the Flåm Valley. We were lucky to snag a seat by the left side window (the good side) and enjoyed the ride down to Flåm, a very small town that usually has one cruise ship at port every day. 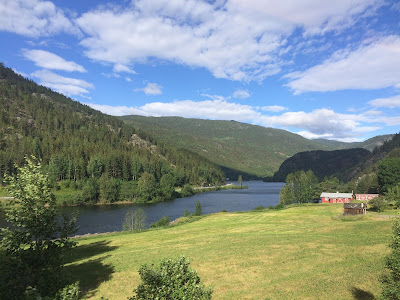 Oslo is at sea level, so it was green and sunny to start, but the train kept climbing... 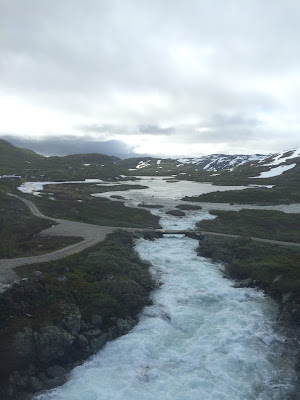 and climbing until we reached the highest point of the rail line at Finse,﻿ 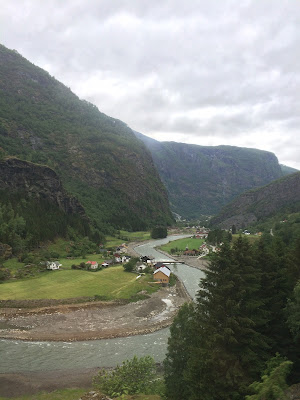 We arrived in Flåm, set up our campsite, then headed out for some light hiking to the old Stave church in Flåm. Unfortunately due to a flood in late 2014, the church had been damaged and the inside was closed for restoration work. 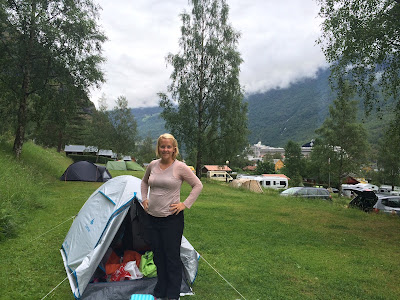 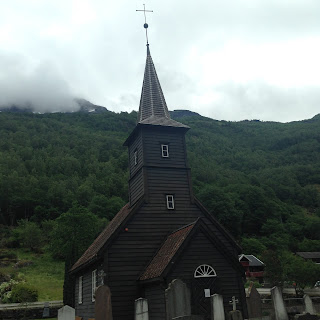 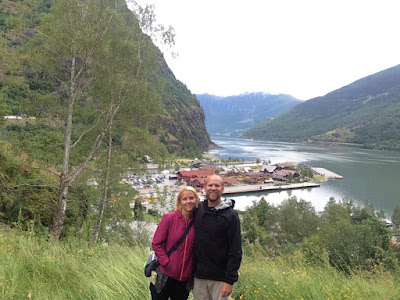 The next day we went hiking to the nearby waterfall, came back to the campsite for lunch and trip planning, then an afternoon hike to Otternes farm, a collective farm from the 18th century that is still operational.

Early the next morning we took the 20 minute bus to Gudvangen to the highlight of our time in Norway, kayaking in the Nærøyfjord. Thanks to Joy and Terry for the thoughtful Christmas gift! The Nærøyfjord is a UNESCO World Heritage Site, and had been on our (mainly mine) radar since the beginning of the trip. It did not disappoint in any way. Our guide was knowledgeable, safe, and generally fantastic. Oh, and the scenery was pretty good too. 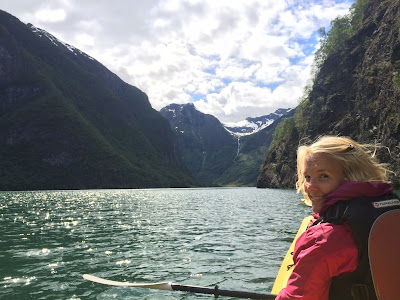 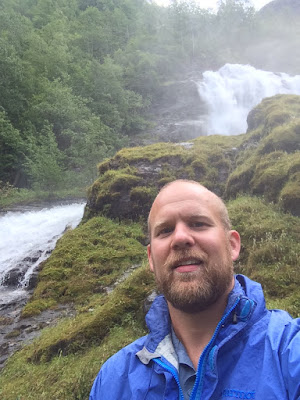 I went up this waterfall by myself. I found out later that I was supposed to wait for Christy. 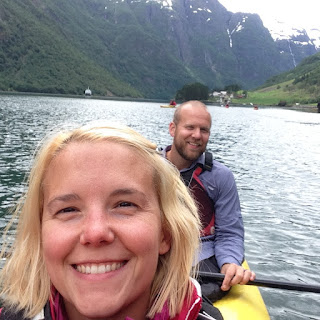 All smiles, though we did have some "kayaking teamwork" issues a couple of times.
Our kayak guides took us to the nearest train station so we could get to Bergen. We arrived to our campsite outside Bergen a little after 10, but there was still plenty of sunlight to set up our tent. The next day we went into Bergen. Like Flåm, Bergen is a common cruise ship port, and is the usual gateway for most tourists to the fjords in Norway. Unlike Flåm, Bergen is large and populous, though it still feels more like a large village than any kind of city. Known for its picturesque wharf area, Bryggen, the weather held up well for us as we lazily strolled around and enjoyed all that Bergen had to offer. 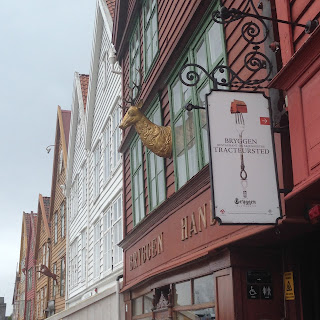 The front of the iconic Bryggen. 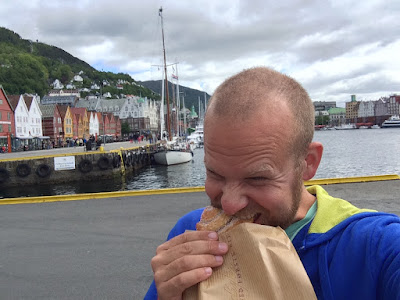 I'm eating a skillingsboller, which is just a fancy Norwegian word for "cinnamon roll without delicious icing like in America." Still good though.
The next day our only agenda was our train back to Oslo, so we took our time getting up and out of our campsite, and went back into Bergen to walk through any of the little streets and alleys we may have missed the day before. Then we boarded our train that went the full distance of the Bergen railway, all 7 hours of it. Pretty, but long. 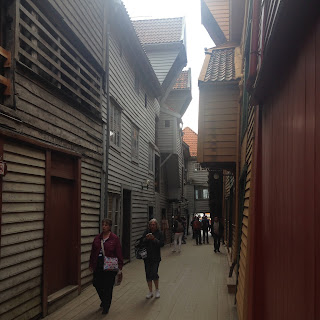 Our next day in Oslo was our last in Norway. We did some laundry and went around to Oslo’s Palace Park area and wharf, then went off to the airport for our flight to our next destination, Amsterdam!
Posted by Christy at 8:56 AM