We had every intention of visiting Durham Castle and Cathedral, and then finding a campsite in the area of Scotland bordering England, conveniently called the Borders. On our way to Durham we used our English Heritage pass to see the ruins of Barnard Castle. 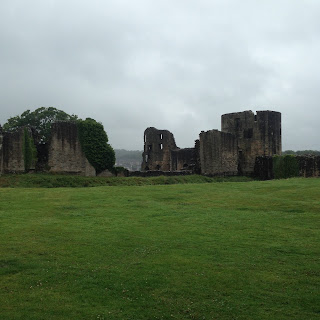 Remains of the wall

The first structure built at the Barnard Castle site was from the 9th century
﻿
Durham Cathedral is one of the buildings that inspired Hogwart’s School in Harry Potter! Some of the scenes were even filmed in the cloisters. This place consisted of layers and layers of history. We weren’t allowed to take pictures in neither the Castle nor the Cathedral. The Castle is no longer in use as a castle, but is still being used as student lodgings for Durham University. There are two small, still-utilized chapels within the castle, and one of the largest flying staircases for its time connects the main building to the Great Hall. 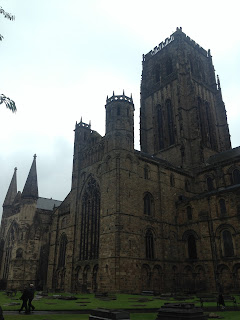 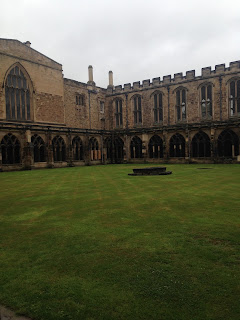 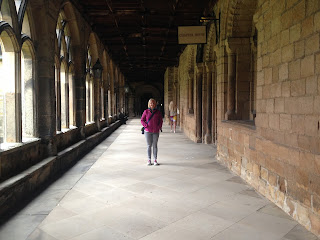 After we left Durham, it was raining heavily, and since we were just looking for a place for the night, we decided to try and find a bed and breakfast instead of camping. We checked several places before we found Dorothy and I’m so glad we did. A nice, comfortable bed was a welcome change after three nights in a tent, and grandmotherly Dorothy made a mean breakfast. Dorothy lives in a little town called Jedburgh and we visited a free museum dedicated to Mary Queen of Scots before we left. It was a wonderfully delightful diversion and I have longed for Dorothy’s breakfast and Jedburgh several times since we left. 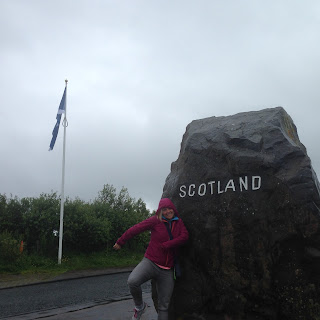 At the border. Do the Scots do jigs?
But leave we did, and before we went to Edinburgh we stopped by Dryburgh Abbey, one of the handful of ruined abbeys in the Borders region, and then made it to Edinburgh with the exact amount of time needed to visit Edinburgh Castle. The city was preparing for the Military Tattoo, a huge Scottish cultural festival with that we barely missed. We wouldn’t have been able to get tickets even if we were going to be there for it, but it would have been fun to experience the city atmosphere during that time. Anyway, we toured the castle and saw the Scottish crown jewels, the remains of the older (12th century) parts of the castle, and some prison cells where captives from the Revolutionary War (and many others) were kept. As our tour guide explained, scratched into one of the doors in the prison is one of the earliest depictions of the American flag in Europe. 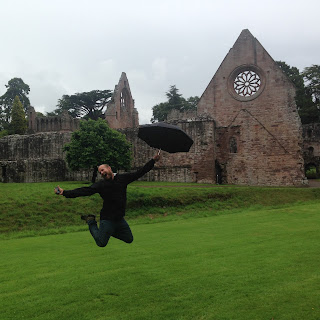 So excited to be in Scotland!
﻿ 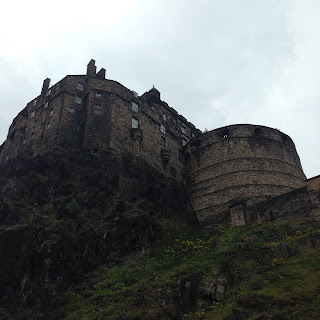 Perched upon a hill, you can see Edinburgh Castle from almost anywhere in Edinburgh
That evening we cooked tacos at our hostel! It was delicious and we met a fellow North American (Canadian) and he invited us to come along to a jazz club with him that evening. Edinburgh is known for its live music and we had a night out planned anyway so we made it a jazz night. It was a great evening with conversations about funny Canadian and American things and some great music as well. The following day we joined a free walking tour of the city offered by our hostel and learned quite a bit about the city while seeing places we otherwise may not have visited. 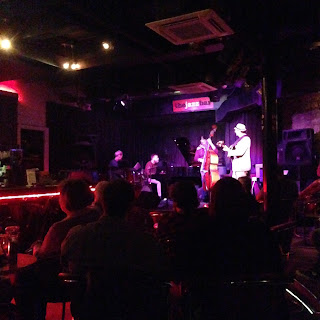 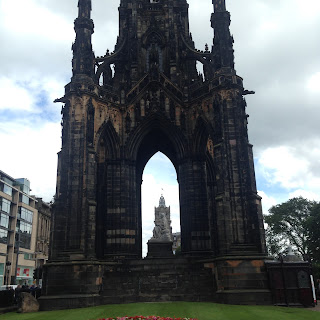 The Walter Scott Monument. Scott is interred at the aforementioned Dryburgh Abbey 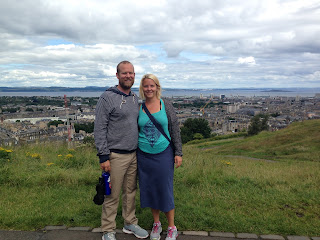 From Calton Hill during our walking tour


It was early to bed that night since we were planning to get up early enough to visit Stirling Castle before going on to Aviemore!
Posted by Christy at 11:47 AM