Initially, I wanted to spend close to a month in Spain and I wanted to spend that time primarily in one city. We move pretty frequently and the most time we have spent in any one city is 5 days. I thought it would be something different for us to be able to ‘settle’ down a bit and spend some quality time in one spot. Unfortunately, there is the Schengen zone. While this makes travelling between EU countries quite easy, it also limits our time in some of the prime tourist spots. I know I have lamented the Schengen restrictions before so I won’t repeat the tirade here but it really messed up what I had planned for Spain. Anyway, if my month in Spain dream had come true, Malaga is where I would have wanted to stay. This town is the birthplace of Picasso, on the sea and calm but festive. We both really enjoyed the city and we rented a room right in the center (next to a café that served nice, thick hot chocolate and churros (we may have gone twice)). 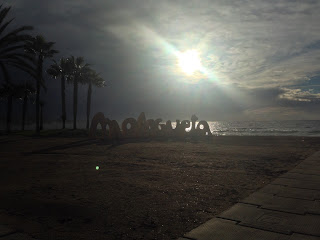 During a run to the beach I couldn't resist this shot 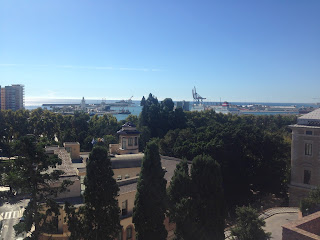 A view of the city from somewhere high 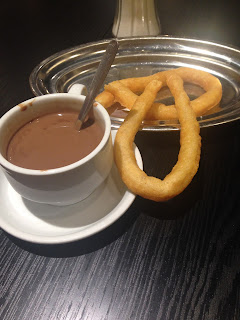 Chocolate and churros
While in Malaga, we visited an alternative but intriguing museum. It is called the Museum of Glass and Crystal and it is the home of a glass collector which he has opened up to share with the public. In addition to all sorts of fun details about glass and glass making he shared snippets of the history of his noble heritage. Despite the embarrassment of Jared claiming that I played the piano when he asked if anyone wanted to play his beautiful antique piano, it was an engaging tour and offered a different type of diversion for the day. 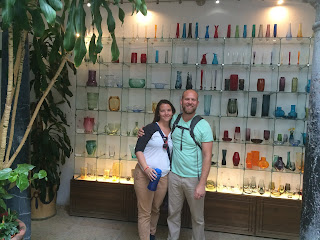 The museum of glass sure was intriguing

We finished Malaga with an aimless walk through the city where we happened upon a small muscatel distributor. Muscatel is a type of wine that originated in Malaga and is super sweet and meant to be drank in small quantities. We had a little glass and then continued to stumble upon a delicious organic restaurant. 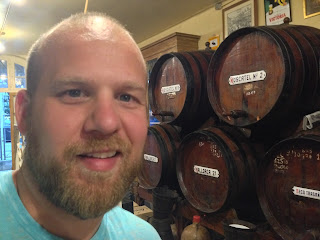 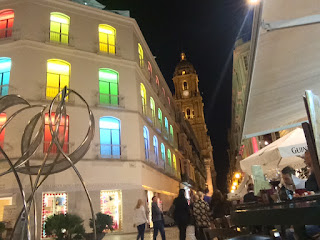 
Our time in Malaga was spontaneous, unique and very Spanish. We loved it!
Posted by Christy at 3:52 PM