We spent three full days in Munich. What a charming city! While the main attraction was Oktoberfest, arguably the world’s most popular festival, we also got to see a good deal of this European jewel. We toured the main plaza , Marienplatz, and even caught the Rathaus-Glockenspiel while it was going. This is essentially a giant cuckoo clock that consists of 43 bells and 32 life-sized figures.  We saw the Frauenkirche church, one of the most recognized symbols of the city and I have to say one of my favorite displays of stained glass that we have seen yet. The colors were very intriguing and the images were pieced together in a beautiful way. There were traditional biblical scenes mixed with more shape based abstract-type designs. The overall effect was enchanting. To add to the lure of the windows, one of the stories behind the building of the church is that the architect made a deal with the devil to fund the church and the devil’s conditions were that no windows be built. However, the sneaky builder positioned the windows ‘just so’ and from the devil’s viewpoint columns blocked all of the windows. The devil’s footprint still remains from where he stood during this legendary example of trickery. It is true, from where “he” stood, all windows are effectively disguised by columns. 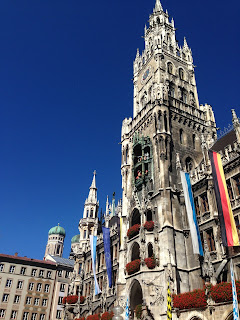 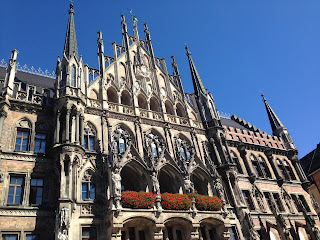 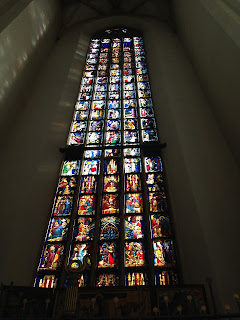 Some of the stained glass from the Frauenkirche 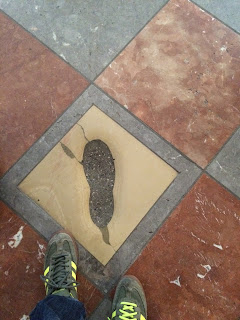 
We also visited Dachau during our time in Munich. This is not only the name of a small village but the name of one of the first concentration camps of the Nazi regime. Being so far removed, both physically and temporally, from WWII and the effects, it is not easy to comprehend the severity of the socio-political situation and the devastation from that time. The experience was a chilling and educational one. The memorials are nice and thoughtful and, for the most part, the tourists were respectful and showed appropriate reverence for the place. 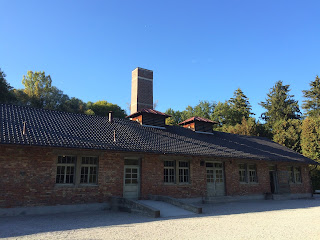 The area of the gas chamber and crematorium 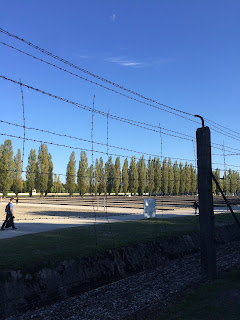 
Of, course, Oktoberfest was the main time-consumer of our trip to Munich. We made it into a (3 different) tents (they often reach capacity) on Thursday night. We also made some German friends. Beyond that, what happens at Oktoberfest, stays at Oktoberfest. Just kidding. It was a lovely festival and the tents are decorated so beautifully and there is music and chanting. It is quite the site to see. On Saturday we returned to the festivities but did not go into a tent. Instead, we walked around and bought a giant sausage, a giant pretzel and people watched for a bit. 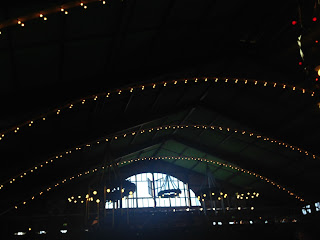 This is not the best picture but capturing the decorations is difficult. The wreaths were huge and had lights strung in them. It was very wintry and folksy. 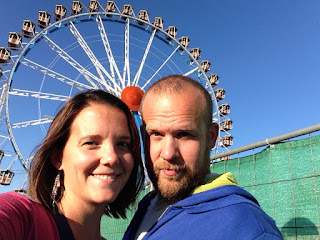 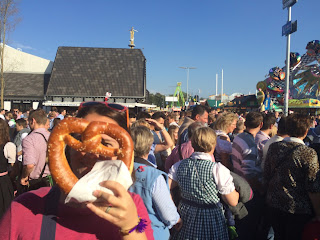 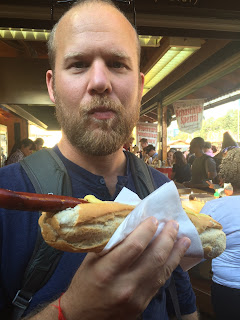 
That sums up our time in Munich pretty well. I very much enjoyed the city and look forward to returning not only to Munich but to see the rest of Germany as well!
Posted by Christy at 3:50 PM