We spent 5 days in the city of two continents, the old Constantinople, and one of the coolest cities we have been to! Tristan also joined us here for the last two days and continued on for a stopover in Sarajevo before continuing on to Croatia. Since she was our guest for these days, I will be doing the blog a bit differently. I am going to write, as usual, about our first 3 days but then will be ‘interviewing’ Tristan about her time traveling with the Hedges!


We were quite tired when we arrived to Istanbul but after we checked in to our apartment and had a quick bite to eat, we went to our first church-turned-mosque. The Chora Church is now a museum, but it started as a church in the 5th century. It was originally covered in Byzantine-era mosaics. The mosaics were covered during the Ottoman Empire when the church was converted to a mosque. Some of the mosaics are visible today, but the most interesting thing about the church is not that it has mosaics, but rather that those mosaics were once covered up, only to be uncovered centuries later. This church acted as a good primer for Hagia Sophia. After visiting this little museum, we walked through the local neighborhood to another large mosque. This was a traditional, still functioning mosque and it was beautiful and quiet. 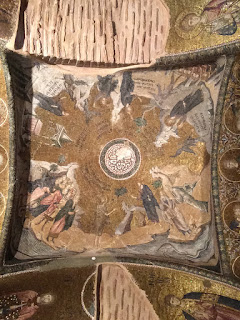 Some of the remaining ceiling mosaics 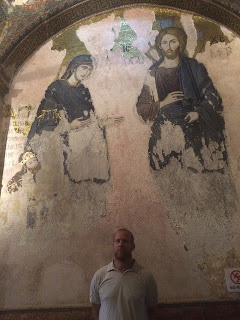 I think this is a good representation of what was covered and subsequently ruined
The next day we ventured to the archaeology museum (which was a huge let down given the interesting history of Istanbul), Dolmabache Palace, Taksim, and the Sultanhamet Mosque. Dolmabache is the newer palace of the Ottoman Empire and even where the first president and founding father of Turkey, Ataturk, resided during his presidential term and where he lived until his death. This palace was again a place we were not allowed to take pictures inside, but it was very opulent with incredibly ornate chandeliers. Taksim is the commercial district of Turkey, and after we had a quick bite to eat we strolled down Istiklal Caddesi, the popular pedestrian street, and I found a Starbucks pumpkin spice latte. I swear, it just jumped into my hands! Then, we made it to the mosque and had some baklava and Turkish tea before walking back to the apartment. 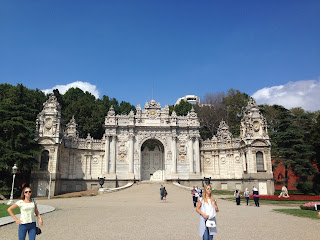 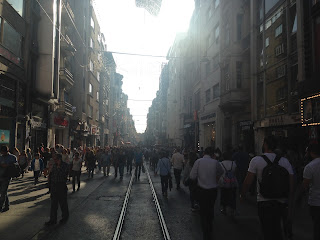 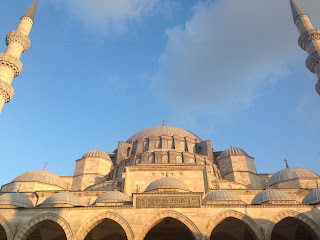 
The next day was the day Tristan came to visit! She didn’t arrive until late so, in the meantime, we went to the Blue Mosque, the Basilica Cistern, and the Topkapi Palace. The Blue Mosque was built across from Hagia Sophia, built to be one the grandest in the whole of the Ottoman Empire. While still a functioning mosque, it was more tourists than religious observers.  The cavernous cistern was built by the Byzantines in the 6th century, but only rediscovered within the last century. It is a very cool place to see, with seemingly endless rows of columns, only visible by the torchlight from the sconces on them. Topkapi is a large palace complex, and the original seat of power for the Ottoman Sultans through the 19th century. All of these places were within walking distance of our apartment, and it was a nice, relaxing morning and afternoon. 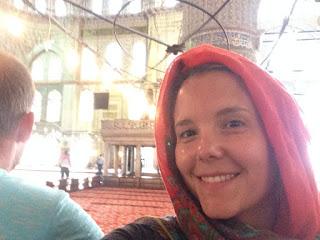 Covered up to see the Blue Mosque 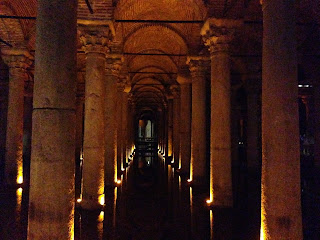 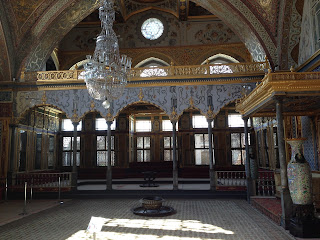 I'll have my breakfast in here, please 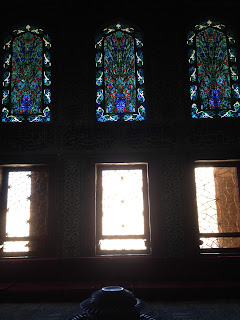 The stained glass was beautiful in the palace 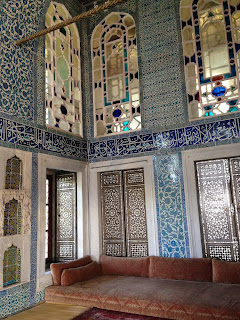 And I'll take my tea in here, if you don't mind