Konya was originally meant to be nothing much more than a stopover between Cappadocia and Antalya- a way to break up the bus ride which would have been 10 hours if we had gone direct. We did only spend one night there but we visited the mosque/ museum, sampled (unintentionally) a local delicacy, and watched a whirling dervish performance. The mosque and museum are free to visit and inside there are rooms set up with the information on the history of Sufism in Islam and some of their rituals. 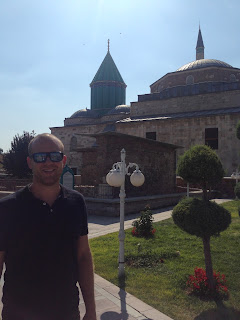 Jared in front of the mosque 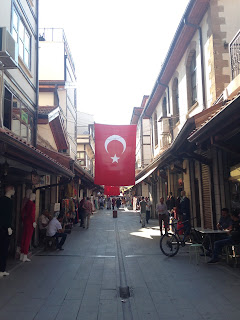 The Turkish flag hanging above the street


The local delicacy we (Jared) accidentally tried was a goat pita combination. We sat down at this little café restaurant and the worker automatically brought us two dishes of the only meal they served. They were loaded with red meat and pita bread, so by default Jared had a double helping!

The whirling dervish performance takes place in the cultural center of the city and was a little bit longer and less English friendly than we had anticipated. It was beautiful to see this aspect of the religion in practice and despite the less than serene atmosphere (imagine a U.S. community center with people coming and going, milling in the aisles, and children running to the restroom), the passion of the dance and practice was still clearly communicated. 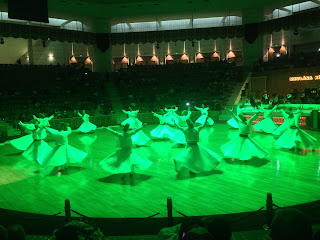 The video is even better!


In the morning we enjoyed our free Turkish breakfast buffet which included lots of different types of cheese, olives, dried fruit, hard boiled eggs, and some fresh greens , complete with lots of bread. After breakfast we caught our next bus to Antalya, a city on the sea!
Posted by Christy at 3:30 PM