Turkey: Antalya and the Travertine Pools of Pamukkale

Antalya is one of the more popular tourist destinations in Turkey. The old town center is charming, and pushy rug vendors and nargile smoking lounges are everywhere. The first night we stopped in at a traditional Turkish bath and opted for the full, traditional experience. What an experience it was! It was nice to be exfoliated for the first time in 8 months and a soapy massage is different than any other massage I have experienced. We were able to maintain our modesty as the workers are used to, I’m sure, the discomfort of some Westerners getting completely undressed. We ended the night with some more delicious Turkish food while sitting on a back street and watching all the people walk by. I also may or may not have fed some of the numerous street cats. 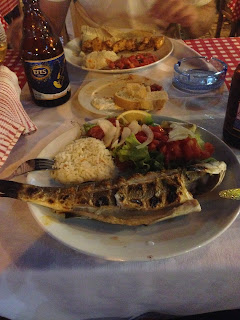 Swim into my belly!


The next morning we took a two hour bus ride to go canyoning and white water rafting. I was hesitant to the canyoning bit of this at first, because when we were in Dalat in Vietnam, canyoning was a popular attraction there and it involved some rappelling down a waterfall. I consider myself a mildly-moderately adventurous person, but trying to rappel while water rushes in my face does not sound like fun to me. Our guide guaranteed us that there was no rappelling in the Turkish version of canyoning, so we signed on up. We were on the Koprucay River and the water was so clear and blue and it was absolutely beautiful. I only got a couple of pictures because iPhones aren’t waterproof yet and they were over-charging for the ones they took of us during the outing. But, despite the 5 hour round trip bus ride, I am really thankful that we went. The canyoning portion took us on a hike through some stunningly beautiful wilderness and it made me wish that we could have spent more time there and been able to bring a camera with us. The company we were with took pictures for us and then, of course, charged more if we wanted them. I am still glad we went, it was something different and I enjoyed the white water experience more than I thought I would. Most of the time I was laughing hysterically through the rapids. There was also a moment when Jared and I got stuck in the middle of a descent. We had only a small moment of panic before we quickly paddled out of it. I think it was fortunate that we ended up in a canoe. That way we only had to deal with being a part of our two person team rather than a team of eight. 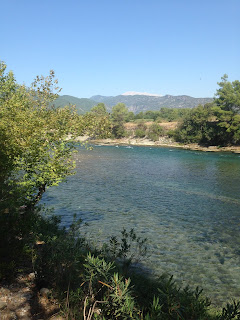 The calm part of the river where we launched 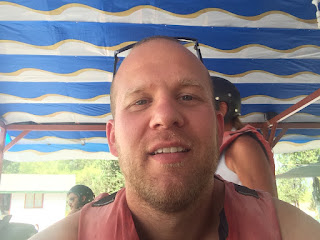 Ready for the rapids 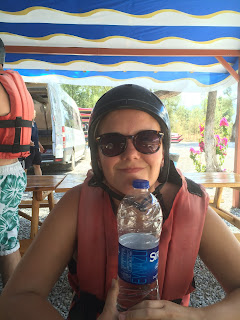 
Our last morning in Antalya we rushed to the impressive archaelogical museum, filled with some outstanding statues and monuments from Greek and Roman settlements in Turkey, and then caught the 1:00 bus to Denizli which was our home base to explore Pamukkale.


Pamukkale is a site of natural springs that has become coated in travertine, a white mineral. This mineral creates a beautiful phenomenon that makes the springs look like little bathtubs covered in icy snow. Despite having seen some pictures before, and being told that they weren't as pristine as they used to be, they were surprisingly beautiful. We planned our trip so we would be there at sunset, so the first part of our day was walking around Hieropolis, the little Roman city that sprouted up near these natural baths. The Romans believed that the baths had healing powers so they built a city to be near them. We love ancient Roman ruins so this was also a fun diversion. 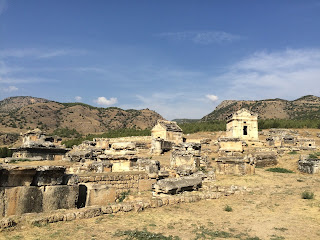 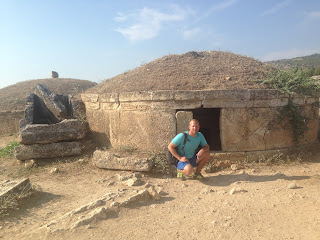 Another amphitheater! It was in pretty good condition, too 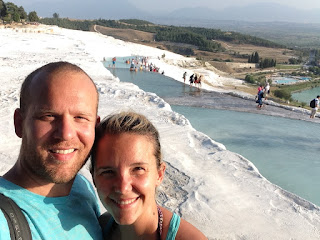 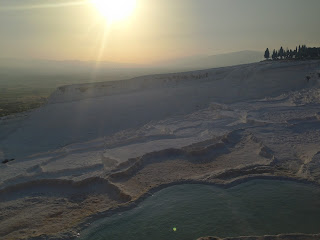 The sun seemed to reflect off the travertine 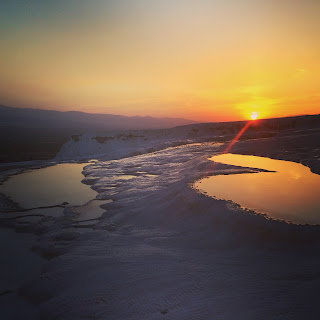 I sure do love a good sunset


That night it was dinner at the hotel and the next morning we were off to a little village near the beach town of Bodrum where we would spend two sun-filled beach days!
Posted by Christy at 3:32 PM