What a beautiful place to start our tour of Turkey! Cappadocia has some interesting geography and history, and we spent our first full day hiking through the ‘fairy chimneys’ and the ‘valley of the swords’ the terrain is definitively unique and breathtaking. After 3 or 4 hours walking in the Turkish sun, one is quite done being in the sun. We finished our hike, ate some lunch and turned in until the sun went down. When the sun is down, Cappadocia is, according to Jared, “the temperature in which humans are meant to live.” It is, in fact, quite pleasant and we had a nice time strolling by all the shops after dinner. 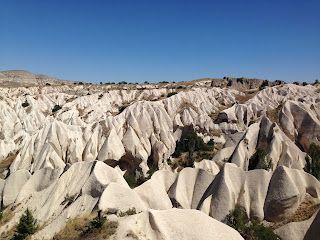 Valley of the Swords 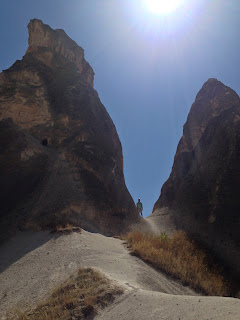 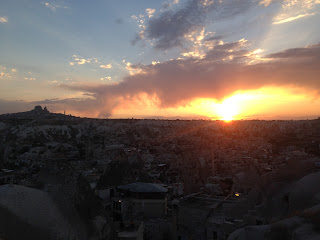 
Our second day we took the ‘green tour’ and visited an ancient stone monastery, an underground city, and hiked through a canyon. The underground city of Derinkuyu was the highlight. It was built (or dug rather) to be a refuge during invasions, and actually went, according to the guide, thirteen levels below ground. We only made it down to the fifth or so level and it was still pretty intense.   Group tours can really be exhausting, but we would not have been able to see all that we did had we tried to go on our own. Our guide was also very informative and provided great context for each place we visited. 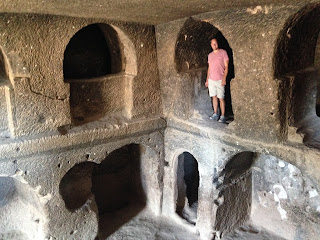 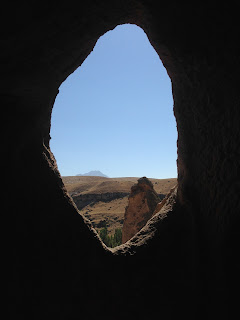 A view from a window 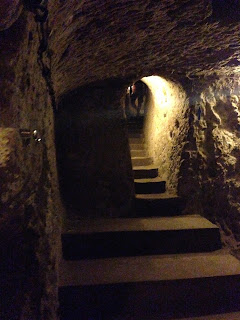 There were some narrow passages


The last day, we had siked ourselves up for a hot air balloon ride. When we were initially quoted by our hotel manager, we thought the price was 130 TL per person which is about 40 USD. However, when we went to pay, it was 130 EURO per person. That was quite a bit out of our budget (especially for only 30-45 minute ride) and not an expense for which we had planned. We decided not to do the hot air balloon and determined that would be reason enough for a return visit in the future. This also turned out to be fortuitous because I came down with a bit of a stomach bug which meant I was in bed all of the last day anyway. I took some antibiotics and was able to make it for a sunset view though, which was, of course, stunning. 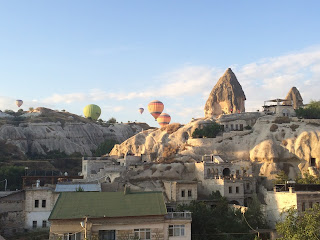 The balloons flying past our hotel window 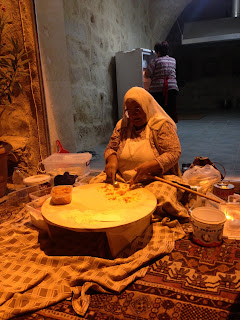 This nice lady fed us our first Turkish pancakes, handmade by her, of course.


The day of rest served its purpose and I was ready the next morning for four hours on a bus to Konya!
Posted by Christy at 3:29 PM