Gumusluk is the name of the little village where we stayed to enjoy the Aegean sea yet again! Our first time with this body of water was when we were in Greece. This village is quite quaint, and instead of regular buses running between Bodrum (the nearest city) and Gumusluk, the dolmus system is utilized. Dolmuses are passenger vans that people essentially just flag down and then tell the driver where they want to be dropped off. It was a new transportation experience and it actually worked quite well. Our first day we wandered through the little shops and then found two chairs with umbrellas where we ordered some cold beverages to drink while we sat and read. We then took a short little hike along the craggy coast to gain a better vantage point of the sunset. It was beautiful and we were pretty much by ourselves to enjoy nature’s most loved spectacle. We had dinner on the beach that night with the beach cats. I may or may not have gotten scratched in the process of feeding them. 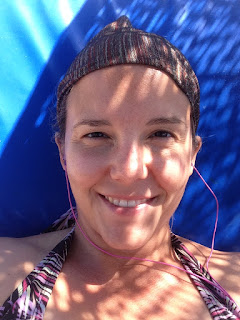 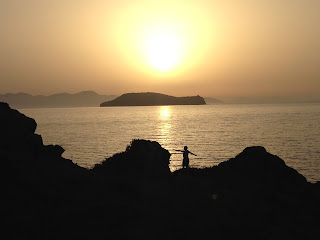 
The next day we started early. I ran to the beach and Jared caught the dolmus to meet me in the village. We found an AMAZING (but pricey) breakfast place where we enjoyed all types of cheeses, olives, fruit, bread and other spreads. After breakfast, we rented a kayak and a stand up paddle board. Neither Jared nor I had ever done stand up paddling but we managed and it was fun to try something new. Then it was more lounging before going back to our apartment. 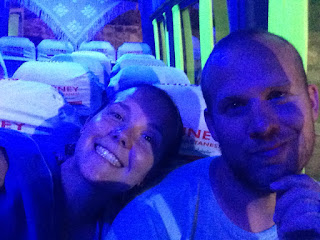 This dolmus was super festive 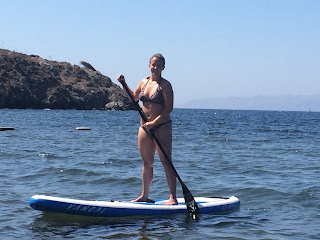 I was definitely a novice but it was fun!


The last day we had to leave early so we could make it Selcuk for our tour of Ephesus. We only stayed one night in Selcuk but it was worth it to see the Roman ruins of the ancient town Ephesus. Jared explained to me before we arrived that this place was kind of like the Turkish version of Pompeii, and although it did not seem to compare in terms of square footage, it was quite spectacular. 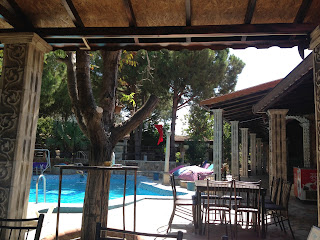 Our fun hostel had a pool 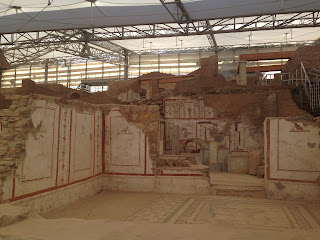 The terrace houses still have paint on several of the walls 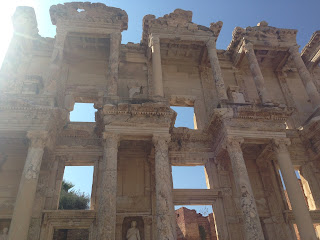 The Library of Celsius has an impressive façade still standing 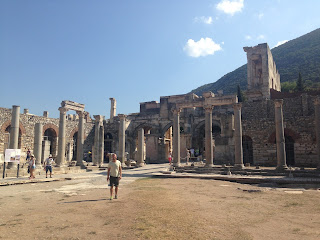 
We also stayed at a fun hostel which served food and had a pool! We passed the night chatting with fellow travelers and we left early (again) to make it to the airport because we flew to Istanbul!
Posted by Christy at 3:33 PM