Our flight to Budapest arrived at a little after midnight. We had a shuttle scheduled but had to wait a few minutes before we left. This means that we did not arrive to our Airbnb until close to 1:30 in the morning. Did you know that addresses in Hungary are a wee bit confusing? Well, they are. Deciphering codes for the key pads can also be troublesome when the code is given in English as a second language. This interesting combination resulted in Jared and I wandering up and down the street trying to find the home where we were supposed to be and furthermore, how to enter said home. At one point in our approximately twenty minutes of wandering, I even accidentally ding dong ditched someone. We later deduced that this someone, was in fact, us. But, we eventually found our lovely little studio and promptly went to sleep.


We slept in the next morning (obviously, given our late night capers) and wandered into town. As Jared was doing some last minute perusing of possible activities, he discovered that it was a national Hungarian holiday! Man, have we been luckin’ out on these holidays. This was our second Saint’s Day celebration and was in honor of St. Stephen I. He is the saint that is revered as the founder and first King  of Hungary, and as part of the celebration his mummified hand is paraded through the streets. We ate some lunch, wandered near the river to see the celebrations there and then found a nice spot on the parade route. It was a very interesting processional, certainly unique to us, and demonstrated the people’s reverence for the saint. After that, we went to a ‘ruin bar’ which is something unique to Budapest. It was basically a bar in a run-down building/ruin type place. It was interesting to see and much bigger than I had pictured. We didn’t stay for long because we wanted to make it to a rooftop for the St. Stephen's Day fireworks. Our Airbnb host had suggested a place and we found it on the map easily enough, but when we arrived to the location we weren’t sure it was actually a place. We took the elevator to the floor indicated (the top floor, for the rooftop terrace) and when the doors opened we were completely alone in a completely empty room. We quickly glanced around and then decided we had gone to the wrong place and immediately got back on the elevator. Back on the ground level, we were looking around for signs and trying to see if the place might have moved but we didn’t see any indication that anything like that had taken place. Eventually, another couple came to get on the elevator and I asked them if they spoke English and if they had been to the place before. They answered yes to both and so I asked if we could follow them. I’m not sure if I came across as creepy or not but they were nice and let us tag along. Lo and behold there was a staircase on the other side of the same abandoned room we had previously been to and it led up to a beautiful terrace. We sat and enjoyed the view and a drink until the fireworks were over. On the walk home we grabbed a shaorma (almost exactly like a gyro!) and then it was another early night.


The next day was pretty packed. We went to the Central Market, the Pest side (Budapest is made of Buda on one side of the Danube River and Pest on the other) where we visited the Fisherman's Bastion for some excellent views. Next we stopped at the Magyar Szecesszio Haza Budapest Museum before going to our scheduled Parliament tour. The market was pretty standard and didn’t really stand out from any other market we have been to. The Pest side was quite lively with holiday celebrations carrying on from the day before. The museum was a visit devised out of a newfound interest in Art Nouveau/Art Deco architecture and design. This interest was ignited by my visit to the Victor Horta house in Brussels, and it has been fun to find architecture from that period in the cities we have visited since then. Unfortunately, this museum was a bit of a let down. But, there was also a café so we had a coffee before our tour. The Hungarian Parliament is a national icon and one of the largest administrative buildings in the world. The tour was well done, and included a visit to where the ancient crown jewels are stored and ceremoniously guarded. After the tour, we walked along the river and found a cruise with a buffet dinner on the Danube! It was well worth the money for the all-you-can-eat and night view. A busy day, but a day well spent! 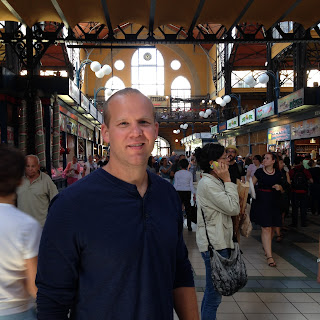 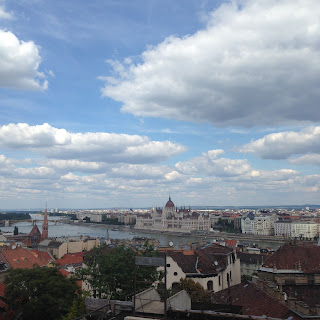 View of Buda from Pest 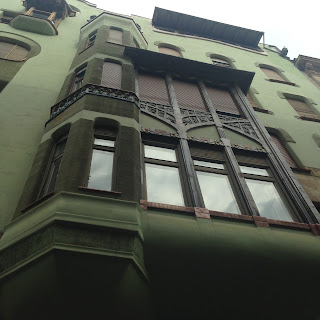 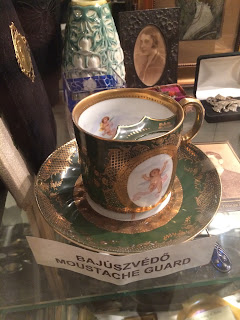 A museum find, to keep your mustache dry while drinking coffee 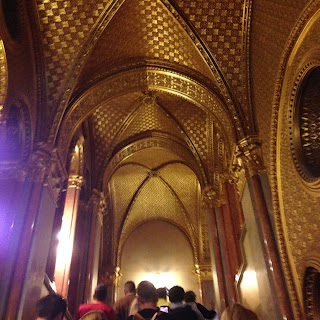 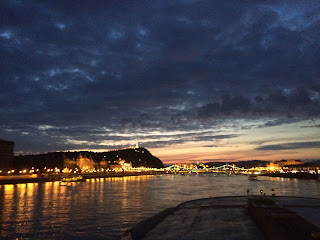 
The next day we had an early morning train to Timaȿoara in Romania. In order to take that train we had to leave from Keleti, the main train station in Budapest. Perhaps some have heard of what happened just about a 10 days later at that same station. Due to the high number of refugees from Syria and beyond, the train station shut down and travel was suspended. On our way to the train station we witnessed what we would later recognize as a foreshadowing to that situation. The train station sits on a large intersection, and in order to get from the southwest to the northeast corner there is a pedestrian subway. Jared and I, in unusually good spirits at 6 am were talking and laughing as we walked. We were almost immediately subdued, however, when as we descended the steps into the subway and were met by a fog of dirty smells. Unprepared for what we saw next, our response was to exclaim over the assault to the senses. We were silenced when our walk became a narrow path outlined by body after body lying perpendicular to the walls on either side. There were individuals and families, some with blankets, some without; most still sleeping, but others just rising for the day. There had to have been at least 400 people making the subway their home for the night. It was not an image I will soon forget.
Posted by Christy at 3:04 AM